This private conservancy is the world’s first rhino sanctuary. In 1970 the owners sett aside a large section of land from the farm for wildlife conservancy and fenced it. The Kenya Wildlife Service approached them and asked if they could take in several rhinos that were left scattered across the country due to heavy poaching. These animals were in danger, plus the small numbers, sometimes just one in a specific area, would mean they could never breed healthy populations. 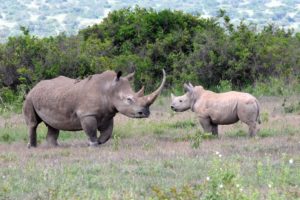 a beautiful white rhino mother with calf, her horn has never been removed and is very long 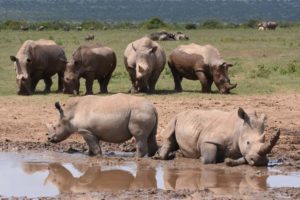 many white rhinos, they are usually less territorial than black rhino and can be seen together

beautiful reflection of a white rhino with baby 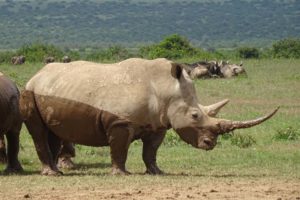 another white rhino with a beautiful long horn 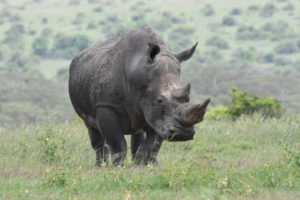 another white rhino (the name originally wasn’t ‘white’, but ‘wide’ for their wide mouth)

Solio became a home for the rhinos and over the next 10 years accepted 23 black rhinos into its fenced area. Fast forward another 10 years and the black rhinos were doing well and breeding, Solio was now ready to provide other areas in Kenya with new stock to create breeding populations in newly secured areas.

And that, in a nutshell, is what it still does today. They have also started a breeding program for white rhinos, so they now provide a haven for both black and white rhino, and when the populations in Solio become too large, rhinos are moved into other secure areas of Kenya.

You can stay overnight in the luxurious lodge, but a day-trip is also possible. So when Joel came to visit we decided we would go on safari in Solio. Although they have around 45 black rhino and more than 185 white rhino, we never managed to spot any of the black ones… We did spot a lot of other wildlife though, including a small pride of lions and lots of birds. 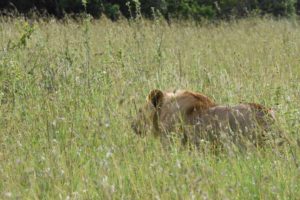 we saw a few lions, barely visible in the tall grass 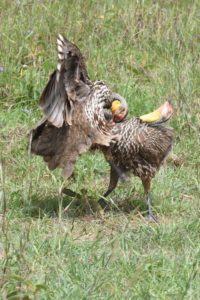 two male yellow-necked spurfolws fighting, maybe it was mating season and they were after the same lady

It is definitely a great place to visit if you want to make sure you see rhinos on your safari. At one point we counted more than 40 individual white rhinos from our car! 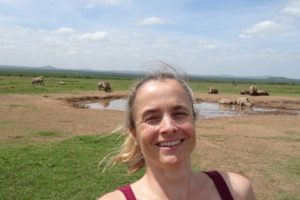 Jude with lots of white rhino at the small drinking hole