Of course we were going to have a shower installed. We already had a shower in the last overland Defender, so Lara was going to have a shower as well. Our first idea was to install a Webasto heater. It would heat up water and it would also be able to heat up the palace in wintery conditions using hot air. We bought the unit and parked it in the kitchen. And that’s where it still is. We decided we would instead use the same setup as we had previously. We liked it, it worked, it was simple, cost-effective and much easier. But, probably most importantly, it was much lighter.

So, we researched the unit we previously had and found you can buy them on Bribie Island. So, off Jude went again, this time on a trip to Glind on Bribie Island. She picked up the whole kit and brought it back home. Jon in the meantime had found a fabricator called John on the Sunshine Coast hinterland who could install them.

We made another trip, this time in two cars as we needed to leave Lara with John, and drove on to visit Josh and Laurene who live not far away. When we picked her up later the same day we had a working shower, even with hot water if the engine has run. It is such an ingenious system, we love it. 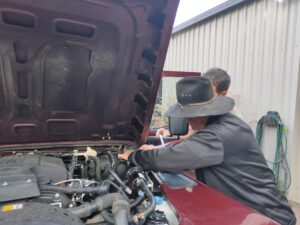 connecting the shower to the new heat exchanger 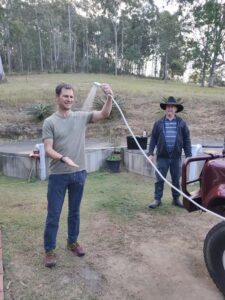 and we have hot running water

We still need to install the little holder so we can hang up the shower rose, but until then we will use it the same way as before – use the other person to hold the shower rose when you need to wash your hair. At all other times you can just hold it, totally fine.

Do we have a shower cubicle? No. And we probably never will. We are perfectly happy to shower without it. If modesty is required you can always wear your bathers, but we’re hoping we will find enough camp spots where we don’t have to worry about modesty!

We still need to work out the system to suck the water directly from a bucket as that would make it easier to just use some additional water we find somewhere to have our shower and not use our precious 100 litres of drinking water. It was something we could do before and we are keen to get that sorted too, one day.

Once we start using the shower on the road we will let you know how it goes.

Update Jan 2023: we have bought a suction cap holder for the shower rose. There is a perfectly good flat spot on the roof rack where we can add it so we no longer have to hold the shower whilst the other person is washing their hair. And Jon has also added the bits of hose and connections needed to be able to use water from a bucket. We will still buy a coarse filter so we don’t have to worry too much about the state of the water in the bucket. It might also come in handy one day if we have to fill up the main tank inside with some slightly dubious water.