It’s a short and direct flight from Nairobi, so we decided to check out the Seychelles. The country actually consists of 115 islands and has just over 90.000 inhabitants. We were only going to visit a handful of islands, all located close to the main island Mahé where the capital (Victoria) and its international airport are located.

Our plan was simple, land on Mahé and catch the next internal flight to Praslin, a smaller island a bit further east. Unfortunately somebody had cancelled our flights, even though we had confirmation and proof of payment. After some waiting and some more waiting they re-booked us onto another flight, but by this time it was dark and raining outside so we never got to see the azure blue ocean lapping around the islands from the sky. 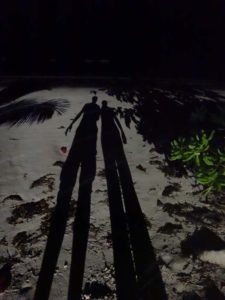 moonlit beach on the night of our arrival

Never mind, we arrived on Praslin and luckily the lady with our rental car was still waiting for us, and it was only a short drive to our guesthouse. In the morning the sun was shining and we went for an early morning jog to one of the island’s most amazing beaches (according to loads of people it is one of the most beautiful beaches in the world). We were the first ones there and found a place to buy some extra water as we had already depleted our supply by the time we got there and we still had to run back! It sure is hot and humid in the Seychelles. 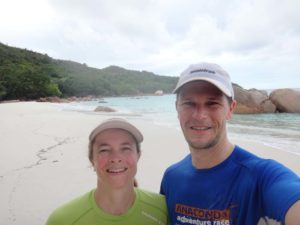 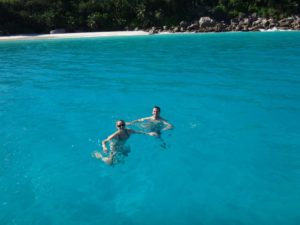 The rain gods were still having fun and the rest of the day we drove around the island exploring beaches and villages, ending our tour at the Vallée de Mai. In this valley the world famous ‘coco de mer’ grows, one of only two locations in the world, the other being on Curieuse Island nearby. The coco de mer is a huge coconut palm with very obvious male and female plants that have very distinct fruits. The female coconut looks very much like a vagina and the male fruit is rather phallic. They are quite rare and the female fruit takes 7 years to ripen on the plant. So we were rather pleased we found one laying right next to the path! It smelled quite sweet and was very heavy! 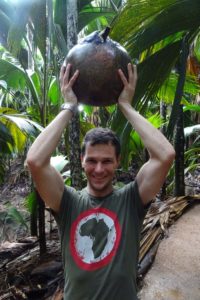 Another rare occurrence is the black parrot that lives in this forest of giant coconut trees and we were very lucky to spot a couple feasting on another type of palm tree.

When we were back at the visitor’s centre we asked if we could see the fruit being opened. The security guard offered to take us back (it was closing time by now) and we were allowed to break it open ourselves by smashing it onto the rocks of the path! He didn’t speak much English, but with some Spanish, some French and lots of hand gestures and guesswork he explained a lot about the plant, it was very interesting. 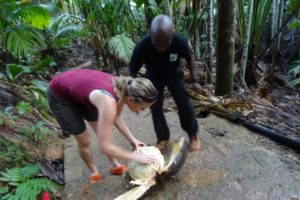 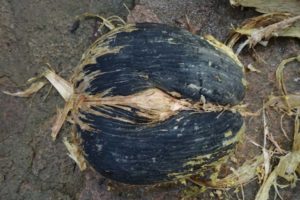 With a hired boat we explored some of the surrounding smaller islands. Cousin has lots of mosquitoes, lots of birds, lots of mosquitoes, some Aldabra tortoises, lots of mosquitoes, some lizards and did we mention it has quite a lot of mosquitoes? Whilst walking into the forest looking for the white-tailed tropic birds nesting on the ground and white terns nesting directly on branches (the egg is laid directly onto a branch without a nest!) we were eaten alive by all the mozzies and were happy to exit onto the beach where a breeze kept them away. Cousin island is also littered with turtle nests, but unfortunately none were hatching the day we were there. Our best lunch of freshly grilled fish (by our captain) and some swimming followed on Curieuse Island where there is also an Aldabra tortoise nursery and the old doctor’s house from when this island was a lepper colony. On the way back to Praslin Island we stopped at 2 more spots for a bit of snorkeling (the point of Curieuse Island and St Pierre Island), a great way to end the day. 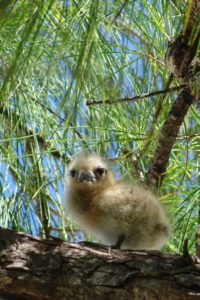 white terns lay their eggs directly on branches (no nest!) and their chicks sit on the branches waiting for mum and dad to come and feed them 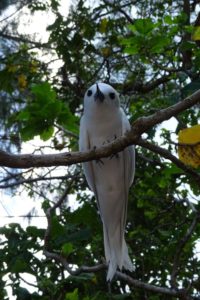 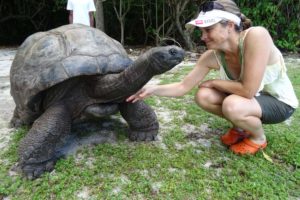 Jude and an Aldabra giant tortoise (they can get up to 255 years old!) 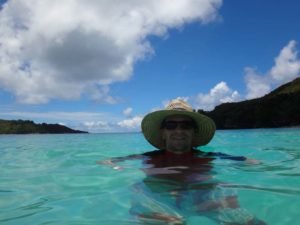 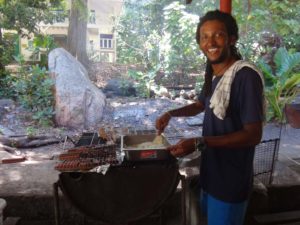 our captain preparing our sensational lunch 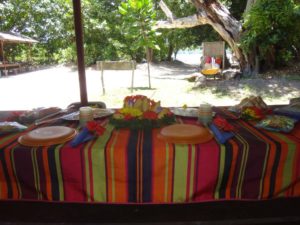 view from our lunch spot 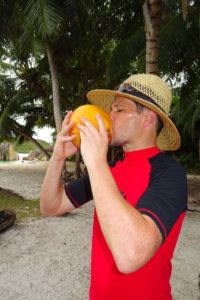 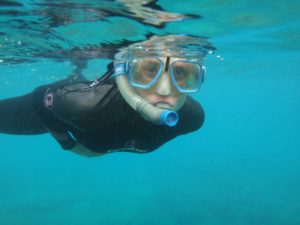 In the morning we were off to yet another island, one that is considered the most laid-back of all, La Digue. Yet more pretty beaches and Aldabra tortoises, but the best of this island is that there are hardly any cars and most people use a bike to get around. We explored the island on our rented bikes, walked to some deserted beaches (as long as you go early you have them to yourself), snorkelled a bit and read our books in between feeding some of the island’s huge tortoises. Jude was still recovering from food poisoning picked up on the first day so we took it easy here. 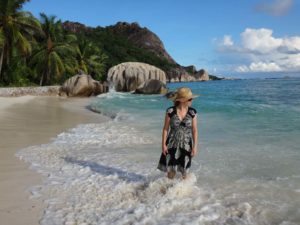 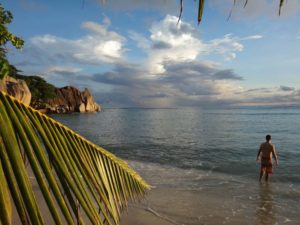 Jon going for another swim on Anse Source d’Argent 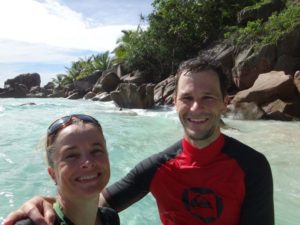 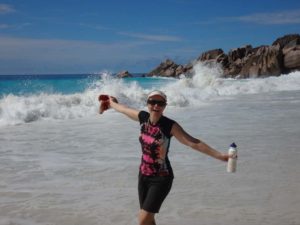 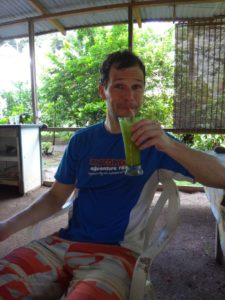 Jon and a yummy smoothie

We went back to the main island by ferry and stayed at an AirBnB up a hill near the small town of Beau Vallon, we were certainly happy with our rental car here so we could just zoom up the hill and back down whenever we wanted.

We wanted to do some diving here, but unfortunately the current was too strong at the dive site we were supposed to go to, and we ended up diving in the bay where there was not much visibility and not too much wildlife. The rest of our time on Mahé we went for walks and explored some of the forested areas on the hills in the centre of the island. 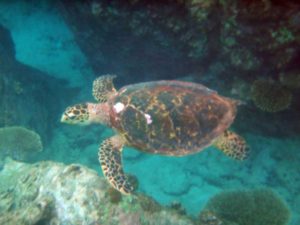 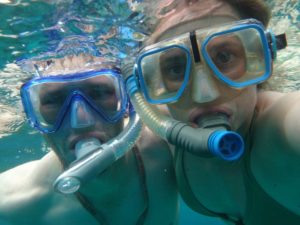 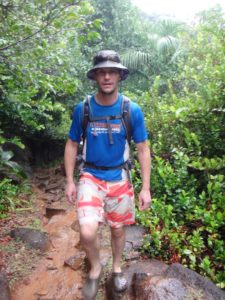 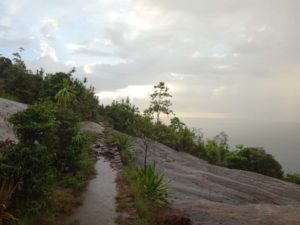 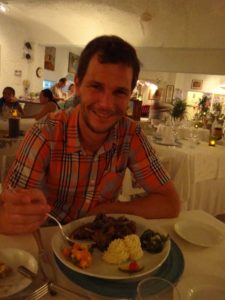 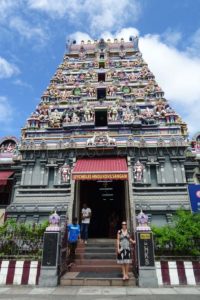 Although parts of the Seychelles are very pretty and if you are able to get away from the 3 main islands we visited, we are sure there are some amazing dive sites waiting for you. But we were not impressed by the beaches and dive sites (Australia has certainly spoiled us with its truly spectacular beaches and dive options) and certainly not by the unfriendliness of the people of the Seychelles. That is not to say we didn’t meet any friendly locals, but if we did they definitely stood out from the rest. But you might find more friendly folk when you book yourself into a 5 star luxury resort?

If you do win the lottery, we recommend going to the remote areas of the Seychelles like the Aldabra islands in the far south of the archipelago, they are meant to have amazing diving!