We hadn’t planned to build in a serving tray from the start, but once we had decided on adding one, it made so much sense. Our fridge is inside the palace, but our kitchen is outside. And hopefully the majority of our living will be done outside too. So, that means we will often need to grab things from the fridge and carry them outside to make breakfasts, lunches or dinners (and drinks). A tray seems to be the perfect tool to assist us with that.

So how did the tray come about?

Our central section above the fridge was designed to have several drawers for storage. Two smaller ones next to each other and one wider one above that, designed especially so we could add latches to the pull-out table. Then we planned to add the table and above that the charging drawer.

Once the seats were in and we had added the two smaller drawers, we looked at the rest of that section. We borrowed some of Roland and Sue’s cushions (which conveniently are also 10cm thick) and sat down on our seats (we didn’t have our own foam yet at that point). And what we noticed was that the table would be too high to be comfortable if we added the wider drawer above those two smaller ones.

So we decided to ditch the drawer and mount the table directly above the two smaller drawers. But that left the question of where to position the latches for the table. We had to think outside the box a bit again and came up with this genius solution (we think). We would still mount the table a little higher, not directly above the two smaller drawers, so we would have space underneath the table to add the latches. It would put the table at a more comfortable height (although still a bit high). But that left the space in between those two latches unused. And as we are trying to use every spare mm inside, we couldn’t just let this space go to waste. 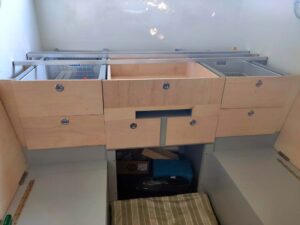 this is the opening we were left with that we could use for something, we decided on a serving tray

We had a brainstorm session and came up with the idea to build our own serving tray (because it would be impossible to find one that would fit exactly in the gap), and after milling it over a bit, we actually realised it would be very handy to have one in that location.

So once Jude had built the two surrounds for the latches of the table and attached them to the plank above the two smaller drawers, the space for the serving tray was created and she could then build the tray.. 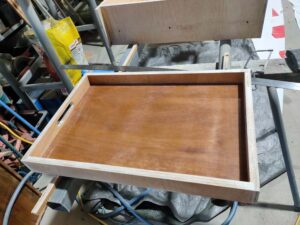 She used pieces of leftover ply, and is planning to decorated it with a map to add a pop of colour. We added some guides so the tray would easily slide in and out of its position. And to make sure it wouldn’t fly out of its location when driving we decided to add some rubber strips. Will they be enough? Who knows, we’ll update after we have driven across some corrugated roads…..

And this is the result. We are mighty pleased with yet another piece of Jon and Jude design. 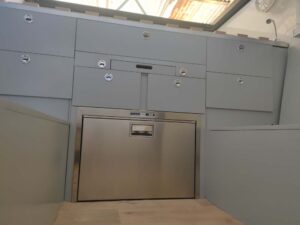