Easter was another 4-day break on the calendar, so we decided to head out of the country again, this time a bit closer to home to minimise travel and maximise time on the ground. Rwanda is only a short flight away (just over an hour), and leaving on Thursday afternoon from Nairobi we were in time for a late dinner in Kigali.

After having seen the movie ‘Hotel Rwanda’, we decided we wanted to stay in this historically significant hotel. It’s real name is (and was during the genocide) ‘Hotel Mille des Collines’ or, for those of you not fluent in the French language: Hotel of the Thousand Hills as Kigali is spread out over numerous hills, come to think of it, the whole country is pretty hilly.

It’s a lovely hotel and even though the movie wasn’t filmed here, it is surreal to think what happened at this exact location 21 years ago. The swimming pool is still here and during our morning swim we reflected on how the pool’s water (and the heroic actions of the then manager) saved over 1,000 people from a certain death. If you haven’t watched the movie, we really recommend you do as it gives a chilling inside into what happened during the 100 days of killing in 1994. 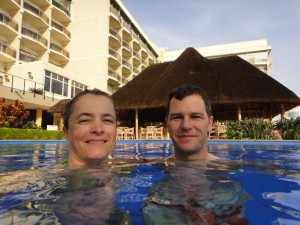 morning swim in the famous pool of Hotel Rwanda

We did enjoy a lovely local dinner, some excellent cocktails and, due to some issues with the door to our room (it was unable to be opened after we had dropped off our bags in the room), an upgraded room all on the house.

The genocide museum in Kigali is a must for every visitor. It is really well done and provides a good and unbiased insight into the genocide period. Some of the stories told are horrific and to reinforce the message, the museum is on the site of a mass grave, at least 250,000 are reburied here. Rwandans (no longer do they identify themselves as Hutu or Tutsi) visit the memorial too, a very emotional experience for them, as everyone in this small country of 12 million knew someone who was killed. 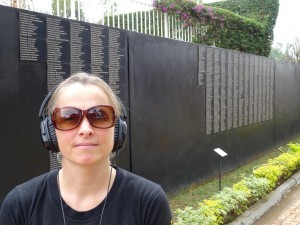 more than 250.000 people killed during the 100 days of genocide are buried at the memorial centre

As we walked out of the memorial grounds it started to rain, so it was time to hit the road in our little Rav4 rental car. We were heading towards the Virungas mountain range in the north of the country. We had been in this area before a few years ago, but on the other side of the border in Uganda with Clevsy and Clayton. The Virungas are a string of volcanoes running along the border with Uganda and the Democratic Republic of the Congo and they are home to the mountain gorillas, made famous by Dian Fossey.

We hadn’t bought any permits yet and were hoping the rainy season would keep the number of visitors to the gorillas low enough for us to buy our permits at the gate. We were lucky as there were still plenty left and after parting with a whopping amount of dollars for the privilege to spend one hour with these amazing animals, we spent the next 3 hours or so getting to our group: Amahoro. We first drive 40 minutes, park the car and then walk through the fields for 20 minutes before finally entering the rain forest. That’s when the mud and the nettles start. It was a nice hike with a good group so after just 2 hours we reached the gorillas. Leaving our sticks and backpacks behind and taking only our cameras, we gently approach our first gorilla. One of the 5 silverbacks in this group, happily munching away on some leaves! The next hour goes by in a flash. We watch the number 1 silverback as well as the number 2, are entertained by the babies and juveniles and are watched by the mums and other females whilst they relax, eat or play. 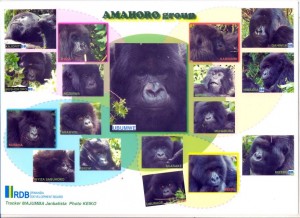 we visited the Amahoro group 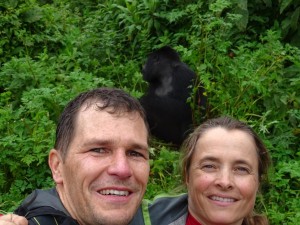 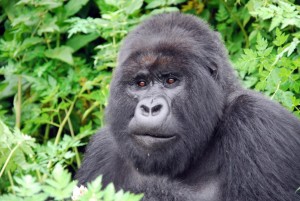 munching on his leaves 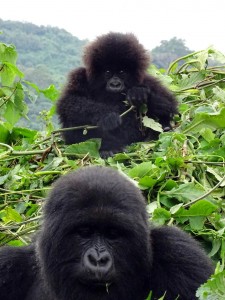 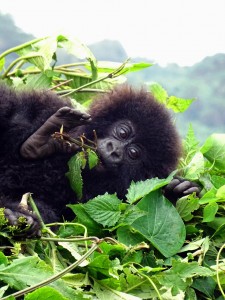 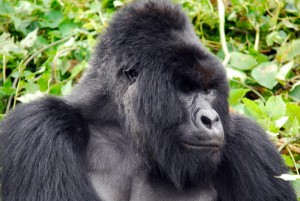 the number 2 silverback in the group 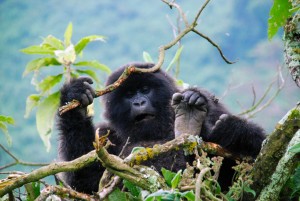 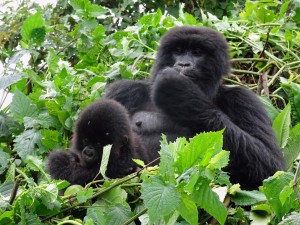 a mum hanging out with her baby 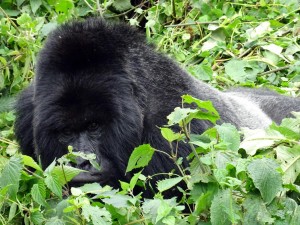 One 5 year old decided to roll down towards our feet before finding some roots to eat after playing with a 3 year old right in front of our cameras for about 15 minutes. They seemed totally at ease with us being there. Their mannerisms are fascinating, they are very dexterous and social, spending time playing and grooming one another. Dian Fossey spent 30 years studying these beautiful creatures, the hour we had was certainly not long enough.

We are lucky the rains hold out the whole time we were hiking and with the gorillas. The next day we were not so lucky as it started to rain towards the end of our visit with the golden monkeys, but it is only a short day and we are back at the hotel before lunch time where they clean our rain trousers and muddy shoes again. They have never been so clean since they were new! 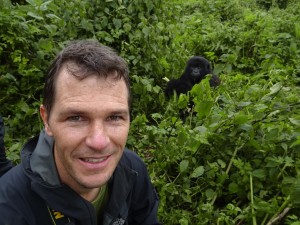 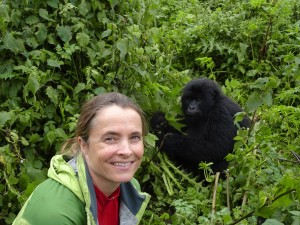 and then started feeding so we could take pictures 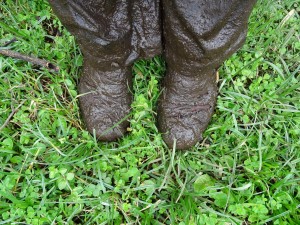 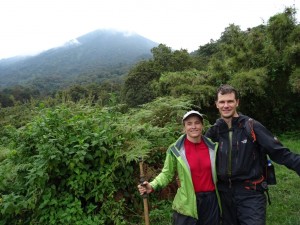 looking down over the valley where we visited our group 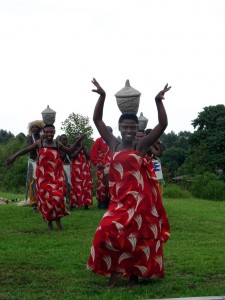 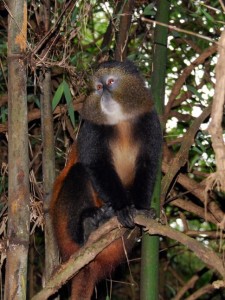 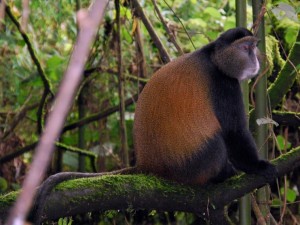 you can see why they are called ‘golden monkeys’

Our little round trip continues towards the border of the DRC and Lake Kivu. This is a potentially deadly lake as underwater vents release methane gases which dissolves in the water. To stop the pressure building too much, the gas is harvested and sent to the local brewery. Otherwise, if the lake had a major disturbance, such as an earthquake, millions of tonnes of methane could be suddenly released which could be catastrophic. A similar event occurred at Lake Nyos in Cameroon a decade ago, killing 2,000 people and all animals.

Now it is perfectly safe to visit. In fact, this is probably one of the few lakes in Africa where it is safe to swim as there are no crocodiles or hippos (due to the methane perhaps?) and it has no bilharzia either. We enjoyed a relaxing afternoon and morning at a lakeside resort, before venturing onto the Nile Trail towards Mabanza where we would turn east again, back to Kigali to catch our flight. 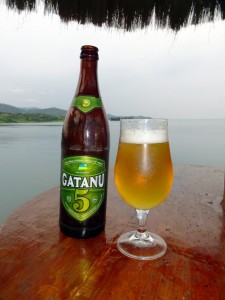 a well-deserved beer at Lake Kivu 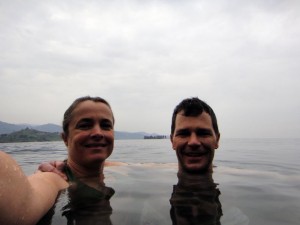 another morning swim in one of Africa’s few lakes where there is no bilharzia, and more importantly, no crocs and no hippos! 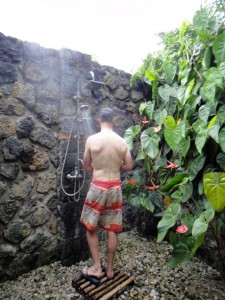 we love our outdoor bathroom (yep, toilet was outside as well) 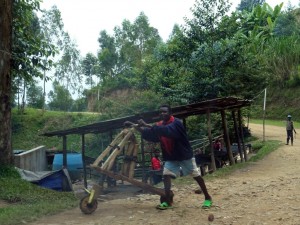 The Nile Trail is promoted as a hiking / cycling / 4WD trail along lake Kivu, through the many little villages and even though our little Rav4 wasn’t called Lara, she did her best to get us through. After a leisurely start to the drive and exploring some of the local markets along the lake we realised we needed to put our skates on or miss our flight. We turned her into a little rally car and enjoyed the 4WD-ing, although she seemed determined to loose parts as she kept scraping her bottom on the tiniest rocks. 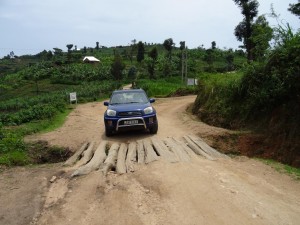 our little Rav4 for the holiday

We made it with enough time to spare to hand over the keys to the rental guy who was there in time, have a quick (very late) lunch, catch up with some of our new friends who were flying out at the same time, before boarding our plane for the short hop back to Nairobi.

During our stay we discovered some interesting things about Rwanda and we’ll leave you now with a quick summary of those things to ponder.

Rwanda doesn’t allow plastic bags in the country. Anywhere. Instead, the shops use paper bags, cardboard boxes or bags made of cloth. Don’t bring plastic bags into the country either as they will be confiscated at the airport or at any of the land border crossings. As a result there is already a lot less litter on the streets in the entire country. And as the government encourages communities to look after their own areas and each other on the last Saturday of every month (between 8 and 11AM), the amount of litter in the streets, the rivers and the lakes is virtually non-existent (and when you do see something you pick it up).

During these ‘Umuganda’ hours even the president helps out. They not only clean up, but also build houses for the needy or repair bridges, whatever is needed in their community.

Why is it that a small nation can make such bold and environmentally friendly decisions (and can make it work), yet our ‘developed nations’ seem totally incapable of any steps towards less plastic, less rubbish / litter…

Starting up a business without red tape? In Rwanda you can set up a business within 3 days… High-speed (4G) internet is available almost everywhere and to everyone… Corruption is extremely low and even in the capital a female can walk safely on the streets – alone and in the dark… All in all pretty impressive for such a small country!

We’ll definitely miss being able to walk around the safe and clean streets of Rwanda, but maybe we can go back one day and visit the chimpanzees in the south… or check out another group of gorillas…

a lot of ladies in Rwanda carry their load on their head, very impressive

getting a lift to the top of Rwanda’s many hills…