Running with the Kenyans

Who doesn’t want to run with the Kenyans, the world’s fastest endurance athletes?! We certainly were excited by the prospect of running with the Kenyans and as soon as we arrived we looked for a running group to join. Thanks to Carol (Jon’s colleague) we discovered the Urban Swaras (meaning gazelles). Our first run with the Swaras took us to the Tigoni Hills, about 30km north of Nairobi, where the tea grows on the sloping hills. It was going to be a muddy and hilly run, quite tough for our first run at altitude (around 1700m). 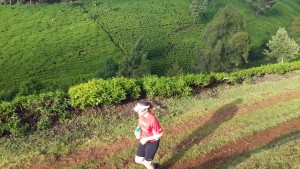 Jude running through the tea plantations in Tigoni with the Swaras

At some points we had to straddle the trail and hold on with our hands to prevent us sliding down the steep track on our bums… other times we used our hands to help pull ourselves up the hill or keep our balance whilst crossing the flowing creeks. We had to stop a few times to scrape of the thick, heavy red mud that kept accumulating under the soles of our shoes, otherwise they just get too heavy to continue running (disclaimer – not all runs with the Swaras are that muddy!). 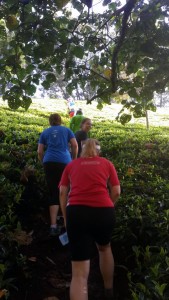 steep hills on our first Swaras run in Tigoni

But we were running with big grins on our faces as it was sooo much better than running on the treadmill! We were out, on trails with like-minded people, laughing and running with the Kenyans. Brilliant!

As we are usually exploring new places in our weekends, we haven’t done many runs with the Swaras yet, but the ones we have done have been outstanding. And now we have made some friends, the runs are become more social too. A typical Kenyan breakfast is shared after the run, some stretching is done together and we cheer in the last arrivals. The routes set out every week vary, but always have a 10, 15, 20, 25, 30, 35 and 40 km option – some times even longer… Can you imagine that?! 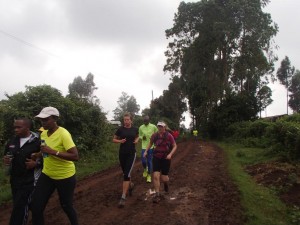 another run with the Swaras, this one in Karatina with Nick and Anna (longest option on this run was 56km)

What’s especially great is when you start the run you don’t have to decide on the distance you will run that day. You simply start and follow the arrows on the ground, with everybody else. Then, at some point, there will be a split indicated by the arrows. One shows the direction for the return to the starting point in 10km (plus or minus a few km…). The other direction is the L for ‘Longer’. And this continues, with splits in the track for every 5km added distance, so if you are feeling good at the split you might decide to go for a longer run… (this can be quite deceiving as the splits don’t always happen after the same distance…) 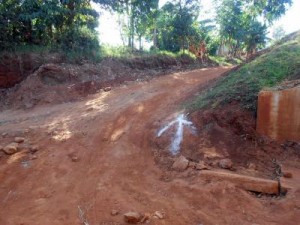 chalk arrows on the ground at a Swaras run

Every Swaras’ run is in a different location, great for getting to know different areas of Nairobi. We’ve now been running with the Swaras on and off for 9 months and haven’t yet repeated the same course, so in addition to making great friends, we’re exploring the lesser know areas of Nairobi.

And, in case some of you are wondering, of course we have kick-started another Mt Lofty / Kings Park / Mt Coot-tha weekly run with friends already! It’s still a small group, but every Wednesday evening around 5.30pm we meet at the main entrance of Karura Forest. It closes at 6pm, but if you can get in just before then, you are allowed to remain in the forest until 7pm. Perfect for a 10km run! Dinner is organised slightly differently here as we head to a restaurant after the run instead of bringing food ourselves. That way we avoid heavy traffic on our way home after the run. So, if any of you come over to Nairobi, make sure to bring your runners so you can join us! (walking is possible too as there are many trails and who knows we might find some walkers who want to join too.) 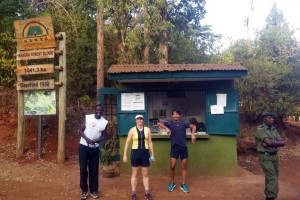 Marcel, Jude and Hafiz ready for the Wednesday night run in Karura Forest 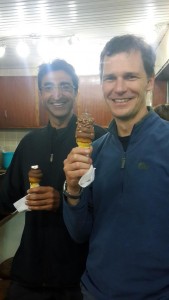 Lately we have been doing a lot of running (Jude has even been sneaking in some extra runs in daytime with Helen) as we were in training for the Lewa Marathon. It is considered the toughest marathon in Kenya (and even one of the toughest in the world) and possibly also the most scenic, and the most hilly, and sandy and hot…

The run is in a private conservancy on the Laikipia Plateau (we are absolutely loving this area of Kenya) and has all the animals you might expect in a wilderness area, including the lion and buffalo, probably the 2 most dangerous animals you can bump into, excluding the hippo which doesn’t live in this area.

The half marathon actually sold out within 3 hours… but luckily we were crazy enough to sign up for the full and after many hours of queuing (no online entries!) we secured our spots. 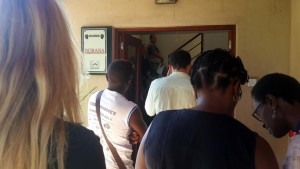 queuing to enter the Lewa Marathon, the half marathon was sold out in 3 hours!

The day of the marathon finally arrived and at 5.30AM our alarm went off. After breakfast we prepared for the run and saw the first people walking and running to the start. The kids’ race would start before the adults and all the Kenyan girls running past were wearing skirts! There is some pretty good prize money for the kids’ race, so they were all looking pretty serious.

We walked over to the start line and then waited for the all-clear from the people in the planes and helicopters. They were the ones making sure no lions, buffalo or elephants would be near our running track for the next few hours. Dozens of rangers were also out on course, so we felt pretty safe all in all. 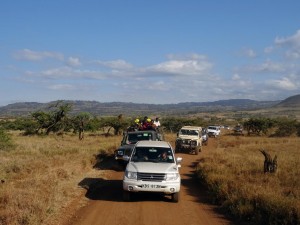 arriving in the Lewa Conservancy with many others, Helen and James in the white car 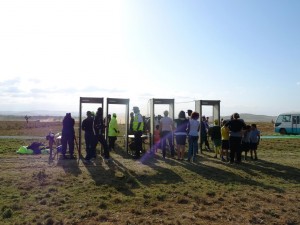 security check in the middle of the field 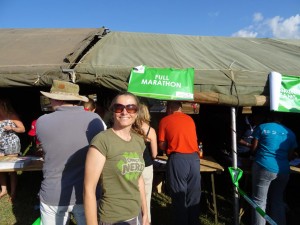 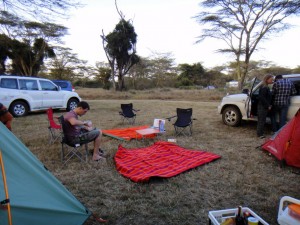 our campsite at the Lewa Conservancy 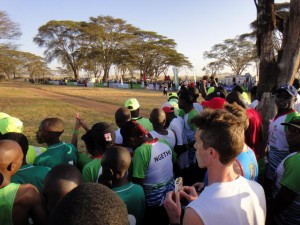 the start line, Kenyans at the front, mzungus (white people) at the back 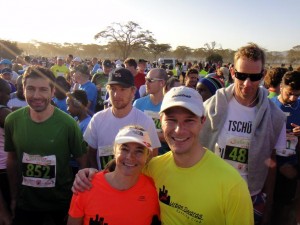 Jude and Jon ready for the marathon

Off we went after a countdown from 10 to 0. All 1400 runners have to squeeze into a narrow track after about 100m, so the elite set off in a fast sprint, leaving us behind in their dust. Soon you can see the line of runners snake around the course ahead of you, giving you a sneak preview of the direction of the trails. 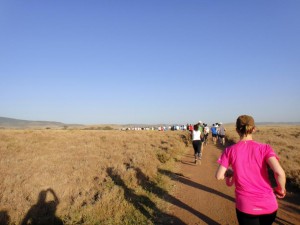 soon a long line of runners stretches out in the plains 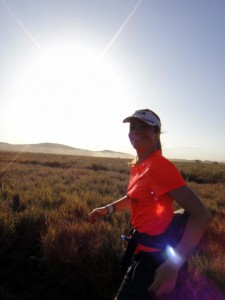 Jude running, only about 3km done

We both settled into our comfortable running pace and enjoyed chatting briefly to people around us, catching up to people we knew and admiring the views around us. There are 3 significant hilly bits on the course, but on lap 1 of the course we both ran up all of them, feeling strong. Then we started lap 2, Jon about 25 minutes ahead of Jude (we think) and Jon started to struggle quickly. Walking up all the hills and finding it hard to keep cool. 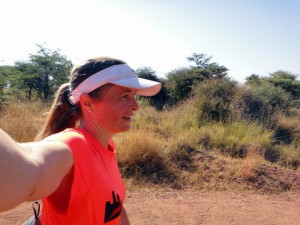 Jude after a few more km (probably around 18km) 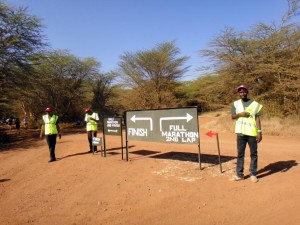 for the full marathon you turn right, it gets very quiet after that turn

After 30km he decided to walk through a misting station, grabbed a bottle of water and threw up. Not a good sign. After a few minutes sitting down he got onto his feet again and started jogging on the flats, walking all the uphills. He finished in 4 hours and 29 minutes.

Jude started lap 2 feeling fine and continued to run comfortably until the 33km mark. By then she was also very hot, but managed to continue jogging till the end, even on the uphills, finishing in 4 hrs and 47 minutes, 3rd female in her age category. 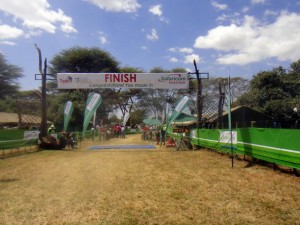 Jude found Jon sitting by the side of the finish line, but soon afterwards he moved into the medics’ tent as he was totally dehydrated and feeling dizzy. One and half hour later, after drinking a few bottles of Oral Rehydration Salts, he felt better again and we could go back to our tent for lunch. The Lewa Marathon had been the hardest thing he had ever done in his life… 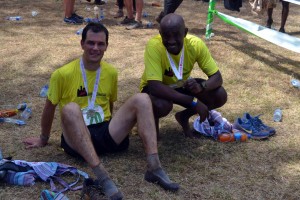 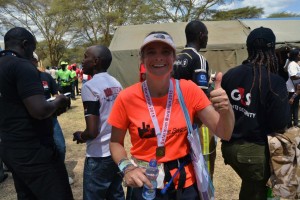 Jude very happy she has finished 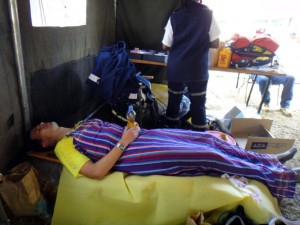 We had a cold shower, ate lunch, had a snooze and went out for a game drive around 4pm. Just a few hours after people had left the running trails, the animals were back. Rhino, elephant and buffalo could all be found right next to the trails we had been running on only a few hours earlier. We found a great spot for sundowners and sat in our chairs feeling very happy and admiring the beautiful spot we were in. 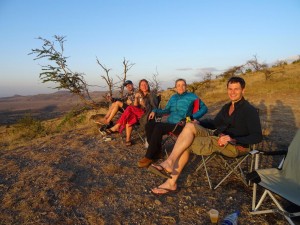 sundowners at a magnificent viewpoint in the Lewa Conservancy 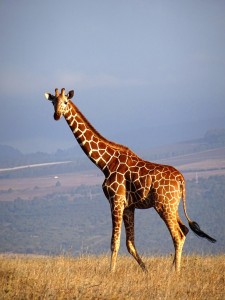 beautiful reticulated giraffe at sunset in the Lewa Conservancy 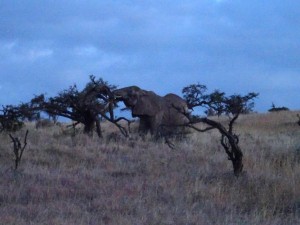 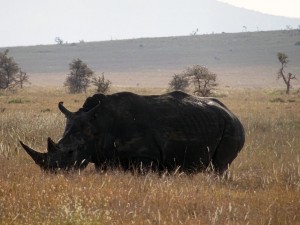 we found this rhino about 100m off the running track, only a few hours after the marathon runners had finished

The next day we were already discussing possible other marathons or ultras we could do in Kenya so we definitely will continue our running with the Kenyans. Who knows we might even get a Kenyan coach for some tough training sessions…

Who wants to join us for an event here in Kenya next year? Here are some races to wet your appetites… (from marathons.ahotu.com/calendar/kenya)