Ruaha NP is the largest national park in East Africa after the Usangu Game Reserve and other important wetlands bordering the park were included in 2008. It is now 20,226 km2.

We had heard good things about Ruaha NP and when we realised a public holiday was coming up in August that fell on a Monday we decided to make the most of it and fly to Ruaha. It is around 625km from Dar, too far to drive even for a long weekend as you can only average around 50km per hour on the roads in Tanzania. A trip to Ruaha NP by car would take more than 13 hours to just reach the gate.

So, very early on Saturday morning we drove to the domestic airport to hop on a little plane to Msembe, the airstrip close to the entrance gate of Ruaha. We had again used a special offer where empty seats on a plane and vacancy in the lodge owned by the airline mean you can get a good deal. The normal flight cost from Dar to Ruaha is higher than flying from Dar to Kruger NP in South Africa…

Our guide was waiting for us at the airstrip and the game drive started straight away. One of the first things we saw was a small herd of elephants digging for water in a dry, sandy riverbed. And as the last of the elephants disappeared, it didn’t take long for some yellow baboons to come down for a drink as well. They were using the same hole already dug by the elephant, but as the baboons are a lot smaller they have to look up every few seconds to make sure they are safe. 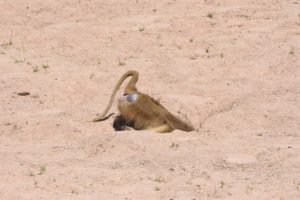 After a few hours we stopped for a late lunch underneath a huge tree. A small herd of elephants gently moved away from the area as we approached. The impala were a bit noisier as they left. 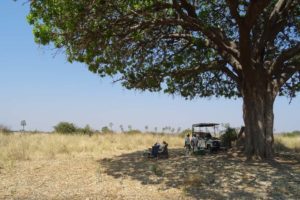 lunch under a beautiful, large tree. We had to chase away a herd of elephant and impala who were enjoying its shade before us

We continued towards our camp, Mdonyo Old River camp and came across some lions resting in another mostly dry and sandy riverbed. We worked out they had a kill nearby and there we found some more lions. One of the males was chased away by the dominant male as soon as the females approached, very interesting to watch. 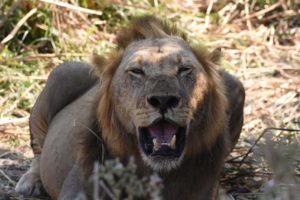 The tented camp was located on the bank of another dry riverbed, but this riverbed hasn’t seen any water for years as the river now runs a different course. We had one of the last tents on the right and enjoyed watching the wildlife come by through the riverbed, it was a small highway. One night we were lucky enough to be standing outside our tent, looking at the stars when we heard some rustling and discovered a hyena ambling past right next to us. 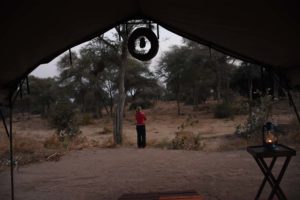 Jude overlooking the dry Mdonyo River, if you look closely you can see the elephant tracks in front of the tent

We absolutely loved Ruaha NP and the diversity of animals we spotted. It was also nice to enjoy sundowners before driving back in the dark. Night drives aren’t allowed, but this adds a small chance of seeing some of the early nocturnal animals already out. We were particularly lucky to spot 2 honey badgers cross the tracks right in front of us. It was just getting dark and we had seen them trotting on the left of us and just had to slow down a little to allow them to cross in front of us. It must have been a female with an older young as they were almost the same size. A little later we also saw a genet heading out on his or her hunt for the night and just before we reached camp we bumped into a leopard on the tracks. 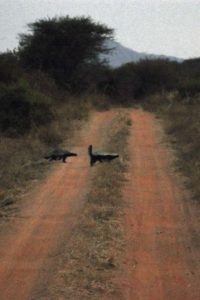 on the way back to the lodge we come across these two honey badgers!

That was already our second leopard of the trip, as earlier that day, just as we were eating a late breakfast in the bush, our guide received a call that a leopard had been spotted on a rock not too far from where we were. Needless to say that breakfast was quickly packed away and we all jumped into the car to head straight there.

We were lucky, she was still there and we had a good look at her before she disappeared down from her rock. Immediately everybody drove to the back of the rock, but we felt that was harassment and went back to the track. Somehow we were rewarded (karma?), as she decided to appear from the bush, cross the tracks right behind our vehicle before she properly disappeared into the thick bush. 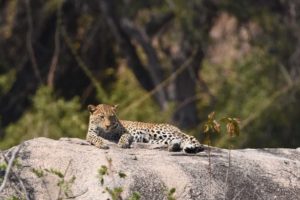 a female leopard relaxing on a rock in Ruaha NP 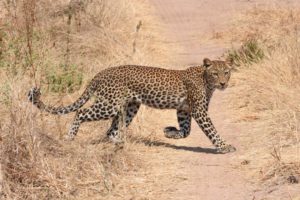 We have seen leopards many times now, but it is always spectacular. They are so incredibly beautiful.

We also loved seeing the brown parrots balancing on the dangling fruit of the sausage tree. It’s a large tree with fruit that can grow up to 100cm long and 18cm wide and hangs down on rope-like stems. They usually weigh between 5 and 10kg. Yellow baboons as well as impala were also all hanging around the big tree and eating the fruits. 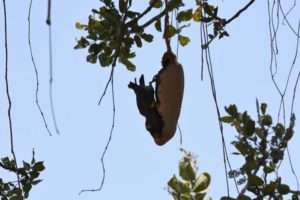 a brown parrot enjoying the fruit of a sausage tree

Other highlights of this trip were the tiniest black-faced sandgrouse chicks we spotted in front of the wheels of the car. Luckily we had a good guide who saw them before running them over! We also drove through a herd of buffalo that must contain at least a thousand animals, the noise, the smell, the dust and the stares were mesmerizing. And one morning, as we were first to leave camp, we bumped into some young lions playing on the tracks. They had torn down one of the cloths they hang up in Ruaha to attract and kill the tsetse flies. It turns out they also create fantastic toys for young lions 🙂

we stumble across a large herd of buffalo, before we find several lions relaxing in the riverbed further along 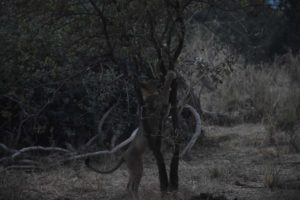 early morning lion activity, after playing with the cloth that once attracted the tsetse flies, this young lion sharpens his claws on the small tree

We absolutely loved our time in Ruaha NP, and the deal with Essential Destinations where you fly with Coastal Aviation and stay in the Mdonyo Old River camp is a great combo offer. The only real downside of it is that you already have to leave Ruaha NP on the last day in the morning (11am at the airstrip) as there are no later flights back to Dar es Salaam. But we’ll be back to Ruaha NP for sure, it’s a magical place. 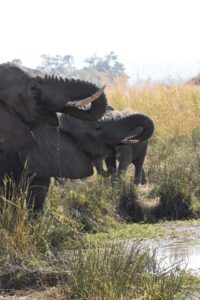