Holiday plans were cancelled, but as they say, when doors close, other doors will open…

Cor is a fellow diver at the Dar es Salaam Yacht Club (DYC), and a PADI qualified instructor and he was going to be teaching the Rescue Diver course to Kevin and Ryan (other divers from the DYC) over the course of 2 weekends. We caught up with him at one of the weekly meetings of the dive section and asked if we could still join, and we could.

It meant getting our books a week before the course, not leaving a lot of time to read all chapters as well as complete the knowledge reviews prior to the start. Jon skipped the dive on Saturday morning to try to finish it all and nearly managed.

Saturday afternoon we all gathered in the kids’ bar area at the DYC and discussed the first three chapters before putting on a rather damp wetsuit (from the morning dive) and jumping in the small pool. We were practicing our fist rescue skills including how to approach a panicking diver and turn a non-responsive person face up. The pool is a bit small and shallow and it was also rather busy on a Saturday afternoon with kids racing down the slide and adults catching them, but we managed. 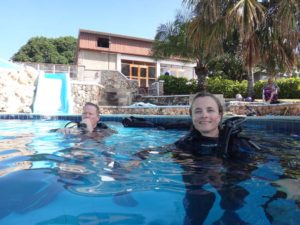 Kevin and Jude in the swimming pool at the DYC 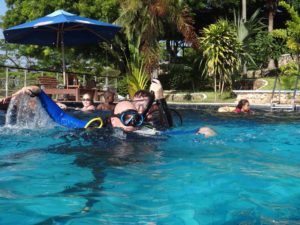 Kevin dealing with a panicked Cor

We agreed to meet again the next day to finish the rest of the chapters, before using our dive boat Nasrin as a base for another skills session. After finishing the chapters we decided to do the written exam before lunch too, getting it out of the way. To pass the test you need to score at least 75%, luckily we all passed without any issues. 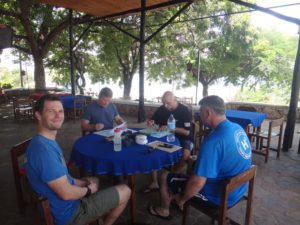 After lunch we grabbed all our gear and carried it down to the slipway to transfer it to Nasrin using the dinghy. The DYC has an excellent system where two dinghies are used to ferry people from the yacht club to their boats (and back), which are all moored in the bay. You simply call them on the radio and they pick you up. 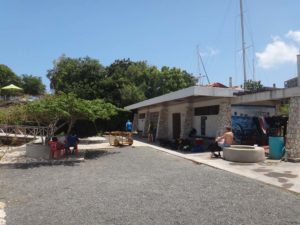 Dastin and Hamisi in the shade, waiting for Ryan, Jude and Kevin to finish getting ready 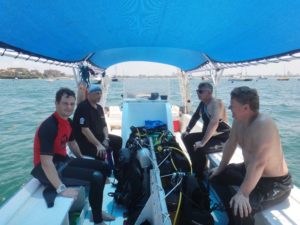 The tide was out and we had to move Nasrin to a slightly deeper spot where we dropped anchor as we needed around 6m of depth to do our skills session. This time a few more skills were added and even though we tried hard we never found our missing diver… (still missing). Poor visibility and a dragging anchor were blamed, and we realised we also needed underwater compasses to complete this course so we could show Cor we were able to navigate underwater. 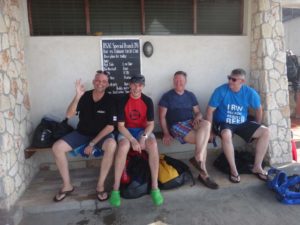 Cor, Jon, Kevin and Ryan on the bench at the dive section’s storage shed after a skills session in the bay

Before we parted ways in the evening we had a few drinks on the quarter deck again and Cor made sure we would be busy during this week as well as we were given homework. We had to make an emergency action plan for a specific dive site of our area. We picked Laura’s Garden and Jude set to work.

Compared to other countries the emergency action plan for a dive site in Tanzania needs to contain a lot more information. Simply because the emergency services are not as well organised here and there is not one emergency number like 112, 000 or 911 you can call. In our emergency plan we included phone numbers of the DYC general manager, several options to call private ambulances, the local clinic, the nearest hospital and the best trauma hospital, but also the South African Divers Alert Network number as well as the direct number of the only publicly available hyperbaric chamber in Tanzania in case there is a diver with suspected decompression related illness.

It does make you think about what you would do in case of a diving (or any!) emergency and after contacting several people for phone numbers as well as emailing the hyperbaric chamber for more information we managed to complete our emergency action plan on time.

Saturday afternoon was our next session and this time we were heading outside of the bay to practice skills in open water, slightly deeper than on our mooring in the bay. Cor tied the boat to the shipwreck Slammersted and we got in the water. Hanging onto the rope on the side of the boat was a bit of a survival mission and about half a litre of sea water was swallowed whilst waiting for Ryan and Kevin to complete their first skills.

We went down next and Jude was asked to bring up an unresponsive diver (Jon) from the bottom. As gravity dictates, she became the heaviest of the two after inflating some air in Jon’s bcd (buoyancy control device) and bounced bum down onto the seabed. Unfortunately she landed right on top of a sea urchin…! So, with a bum looking like a small porcupine, she proceeded to bring Jon up to the surface. But when Cor indicated it was now time for Jon to practice the same skill by bringing Jude up, she told them she needed help first getting the spines out of her bum…

Time to head out of the water and try this on the boat as several had gone straight through the wetsuit and had lodged themselves into flesh. Ouch. And then Jon decided to feed his lunch to the fish as the rocking boat on anchor was too much….When Cor, Kevin and Ryan next came up after practising another set of skills under water, we decided it was time to head back and crack open a bottle of wine.

Jon spent the night rubbing the local remedy for sea urchin spines lodged in skin (papaya) on Jude’s bum, it was a wild Saturday night!

On the last day of the course we met up for lunch with our fellow divers Kevin and Ryan to discuss some tactics and agree on some procedures for the afternoon’s scenarios. After practicing skills separately we were now supposed to demonstrate to Cor that we could combine them all and actually rescue somebody. 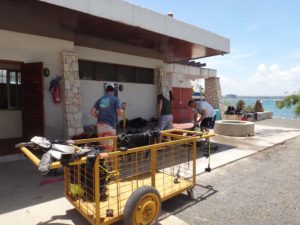 Jon, Kevin and Ryan getting ready for the final day of the course

One of the tricky things was to actually lift an unresponsive person into the boat. Not easy as Nasrin sits quite high above the water. But with the help of a hammock and Dastin and Hamisi (the captain and his assistant) we managed to lift Alan (our volunteer victim) and Cor (also playing victim) into the boat and complete all the necessary scenarios.

Time to celebrate! The boys had all brought something to drink, and even remembered the (plastic) glasses! As we slowly cruised back to the DYC we enjoyed several bottles of wine and plenty of nibbles. We had all passed and are now PADI rescue divers (although Jon and Kevin still need to complete their first aid courses before they get their actual certificate)! 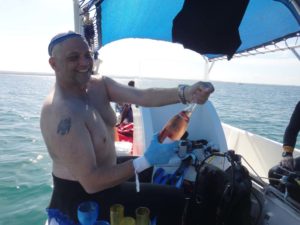 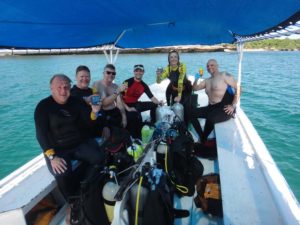