Every year the Dar es Salaam Hash House Harriers organises a relay run to Bagamoyo, an ancient Swahili town around 60km up the coast from Dar es Salaam. The run is divided into many small sections, most only 2-4km long.

We had only joined one hash run in Dar. The run was great and a lot of fun, but we weren’t keen on the length of the Circle at the end (more than 1.5hr!), so we hadn’t returned to the Monday nights. But this event sounded like fun. We signed up and arrived at the Piccolo Hotel, just at the outskirts of Dar, around 7am. We were assigned to team Tiny Thrillers, with Tiny as our team captain. He hadn’t organised t-shirts so we received some random old shirts which were way too big. There was also team Ginger Condoms, the Wet Dreamers and another team… we were the green team.

the Tiny Thrillers team at the start of the relay

The first run started at 7.30, and as we were not running this one, we hopped into the car and followed the runners down the dirt track. Jude ran the second leg of 3.8km from the White Sands roundabout to Kunduchi village and came a respectable second place for the green team. Next up was a cycle ride and then it was Jon’s turn to blitz the 2.7km run from the Supermarket to the Middle of Nowhere. One more run followed and then it was already time for breakfast. 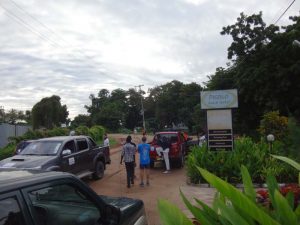 the first runners are off 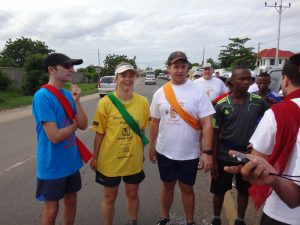 Jude ready for her first run 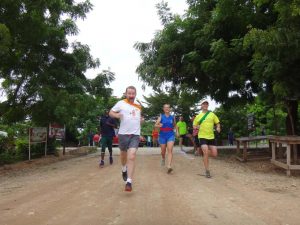 Jon starting on his run

Plenty of beer was served over breakfast of course…

More runs followed and then the walkers were challenged on a hill climb, before the runs turned wet and muddy and a large river had to be crossed. Jude ran the last leg on a slightly hillier course into Mtambani School where lunch was served. 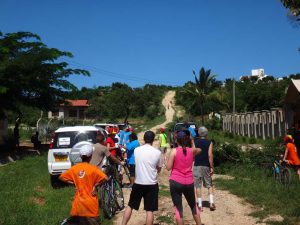 looking at the hill for the walkers 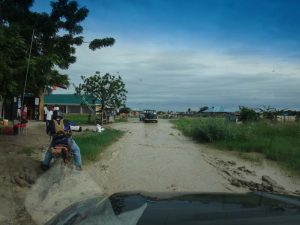 it was still quite wet in a lot of areas 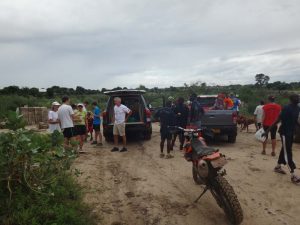 another swap of runners after a big river crossing 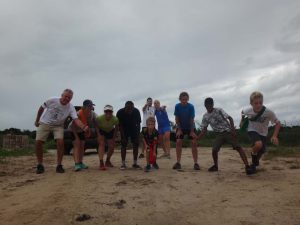 Jude joins the run for fun 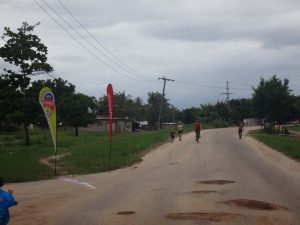 Jude arriving at the lunch spot

It rained hard over lunch, and the kids’ run directly after lunch was a slightly damp affair. And so were the two bike rides that followed. After the bike rides things went a bit pear-shaped as the roads we were meant to run on were blocked for a car rally that was running far behind schedule. We did some there-and-back runs and Jon joined one of them. We finished off with a team of 5 people speed-walking to the finish, Jude took the lead for the Tiny Thrillers and managed to secure the last win for the day. 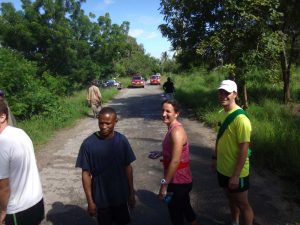 Jon at the start of the there and back section

Turns out the Tiny Thrillers had won enough runs to take the overall trophy during the circle at the Bagamoyo Beach Resort. 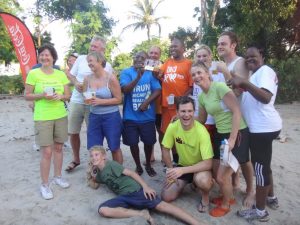 the Tiny Thrillers at the end of the relay, trophy in hand!

We left the circle when it was still in full swing as we had to head back to Dar es Salaam to make sure we joined one of the compulsory qualifiers for the paddle to Zanzibar. But the relay had been a fun day out we would happily do again 🙂 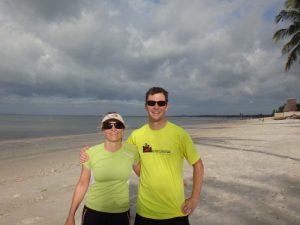