China is a land of many contradictions, many incomprehensible for our western minds, and at times we really struggled with this country, its citizens, customs, signs, lack of privacy and rules.

Even though China has had a one-child policy for many years, predictions are the population will continue to grow at least until 2042. And it grows at an alarming rate. Everywhere you go, you can see new buildings going up. Sometimes more than a dozen high-rise apartment buildings (30-40 floors) at a time. Half of the finished ones appear empty though, is this a country that just wants to pretend it’s growing at a rapid rate, but its citizens can’t afford it? 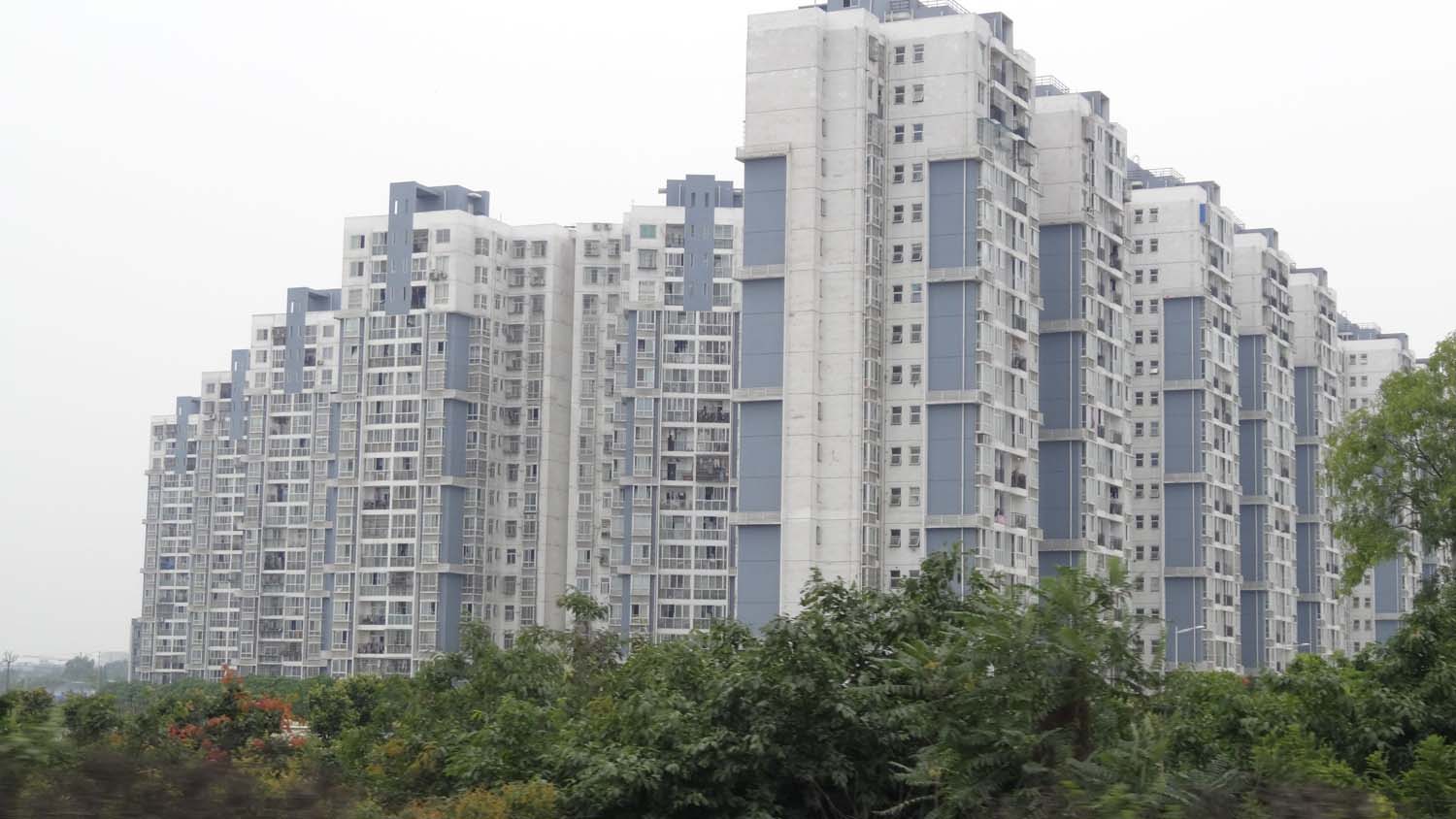 lots and lots of apartment blocks going up everywhere 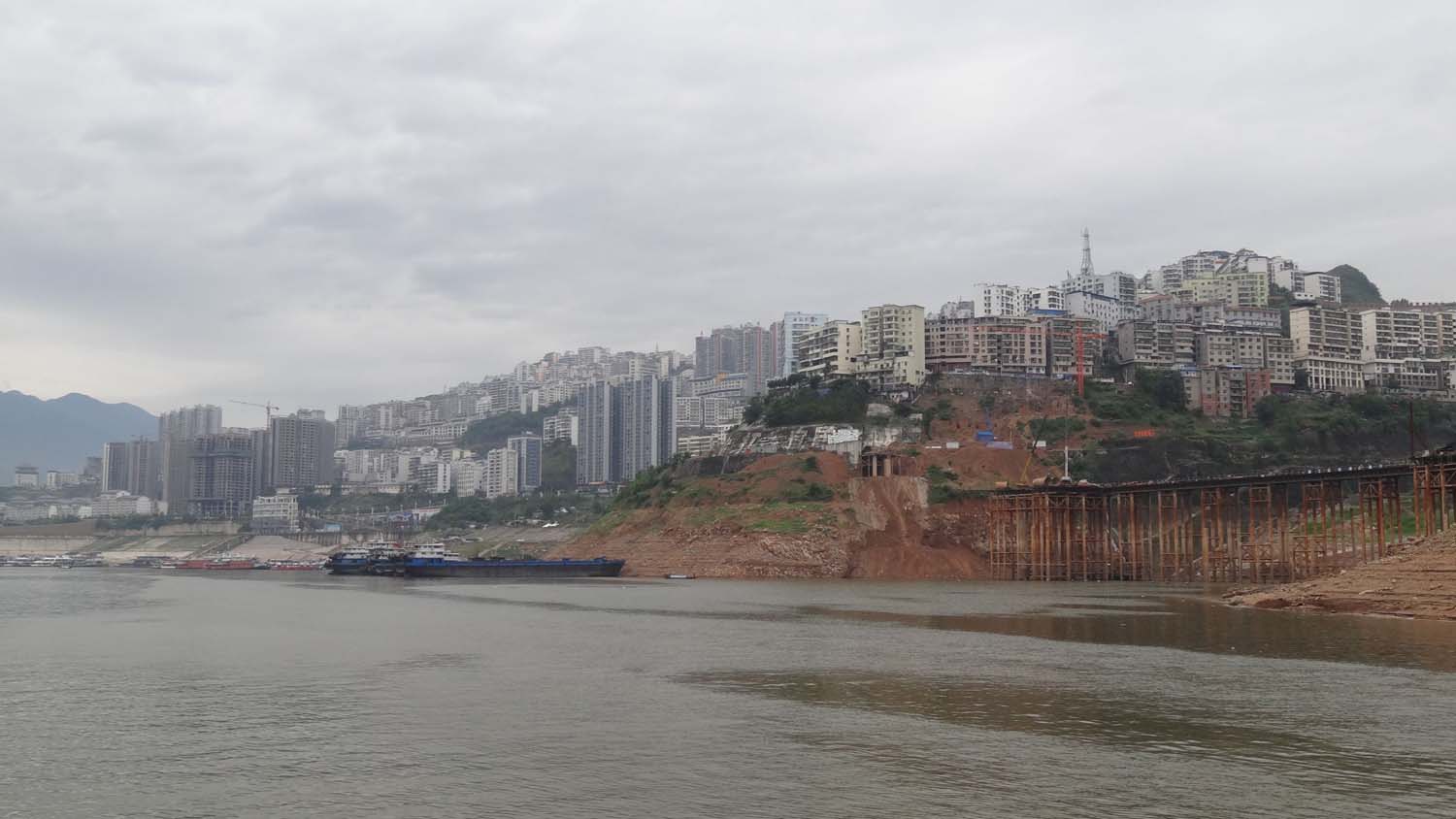 another town with millions of Chinese

New roads are popping up everywhere too. We’ve seen some very impressive new ones being built and we’ve even been lucky enough to drive some sections on them, although they charge (a lot!) for the privilege. One brand-new service station even had hot showers and free, fast wifi, exercise machines and a dance class full of old ladies in the evening. But many roads remain in appalling conditions, extremely potholed or broken up, dirt sections, washed away or covered in landslides or rock falls (which are just shoveled away, rather than fixed). Any driving on national or provincial roads is therefore very slow going, especially in the mountains where the trucks just don’t have the power and agility of Lara. 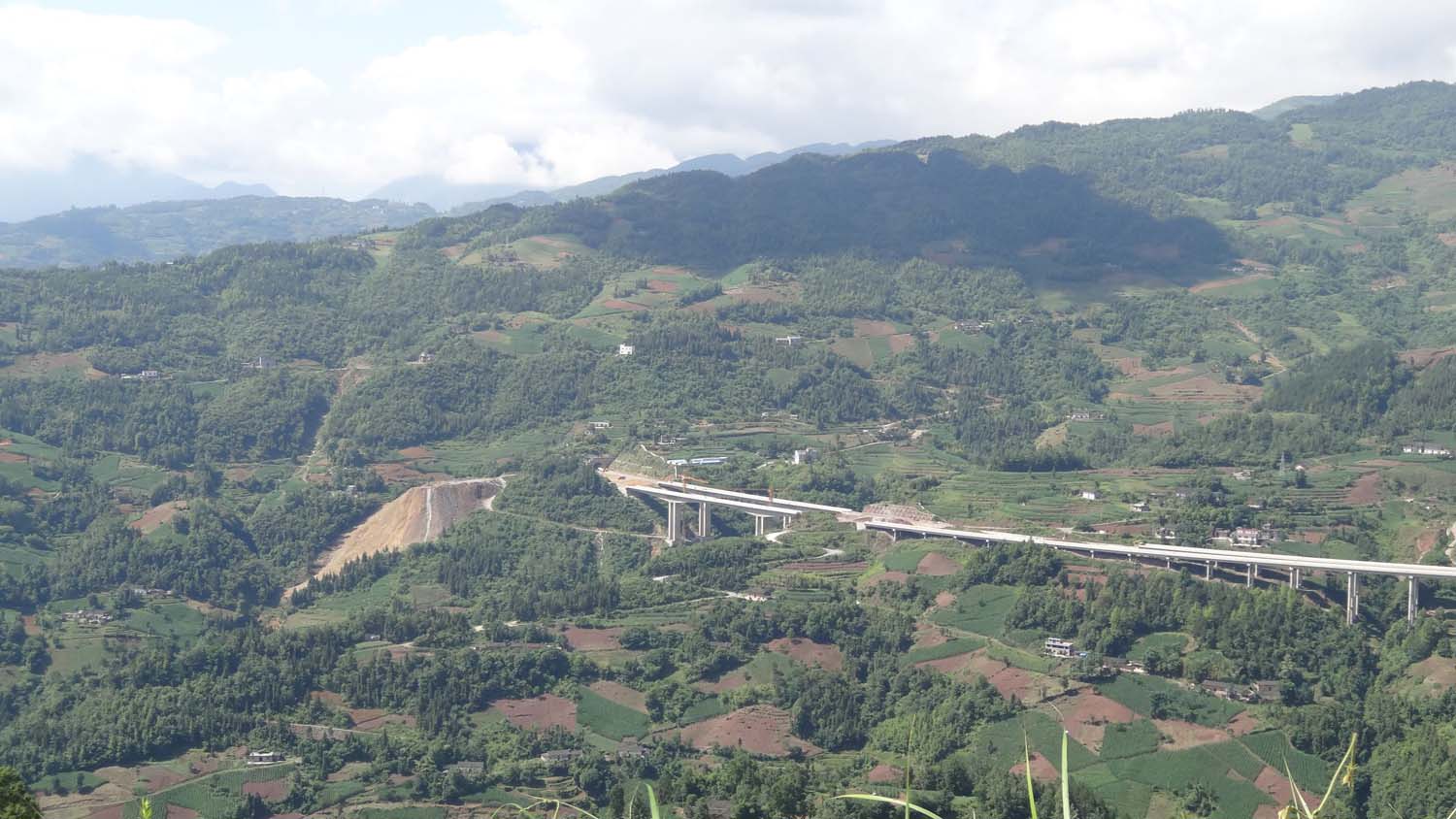 building another new road, we were on the windy slow-going old road 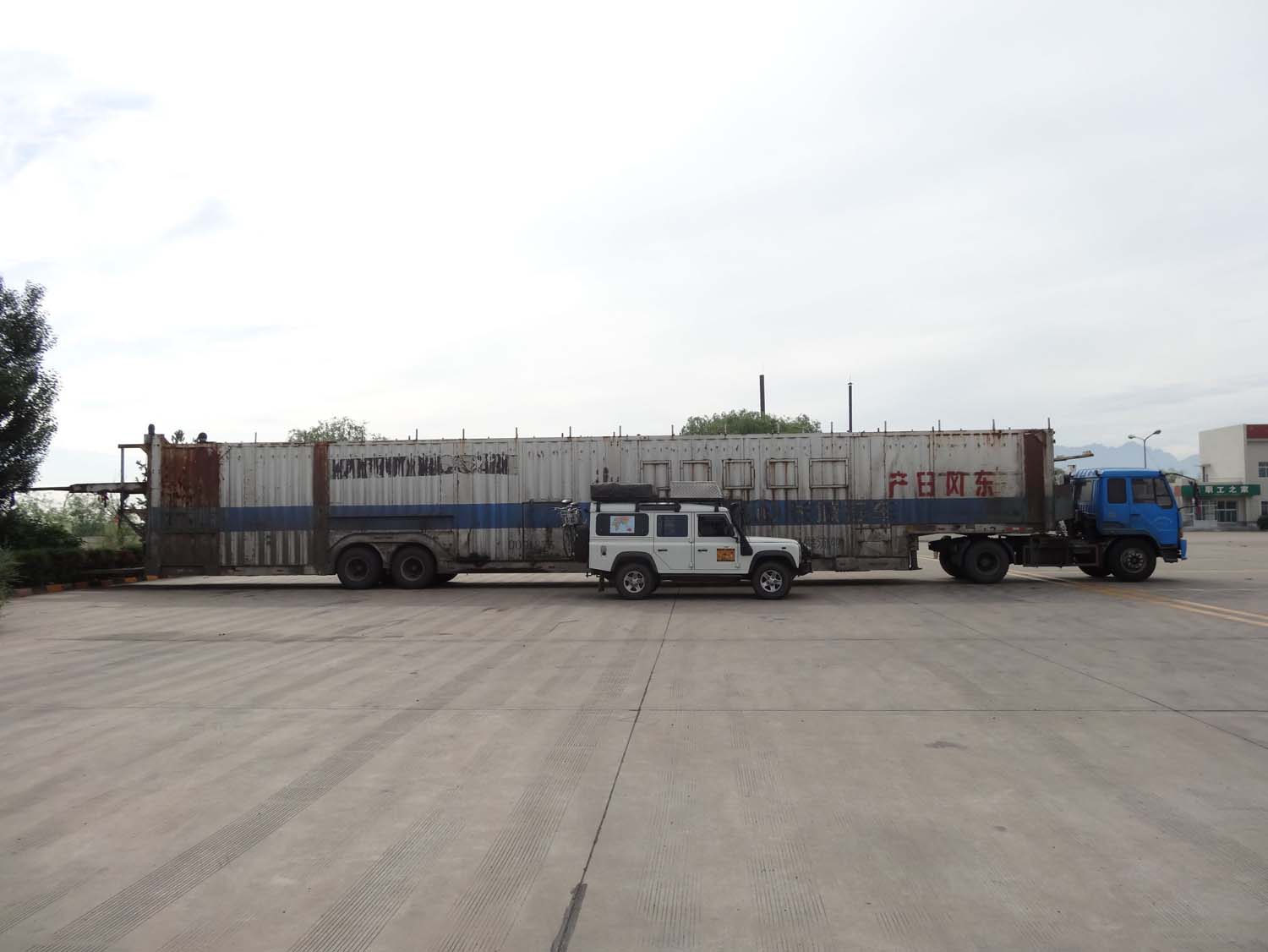 Australia has road trains, the Chinese have massive one-piece trucks!

We struggled mostly with Chinese behaviour, on the road, at tourist attractions and when they spot us. Most Chinese have no respect or understanding of personal space or privacy. We were lucky as people can’t walk into our car the same way they can with the motorhome trucks, but we also had our fair share of people walking up to our campsite or lunch spot and starting to grab things, look over your shoulder, poke their heads into the car and shout at you. Not an angry shouting, but the shouting of a person who thinks that by talking loudly a foreigner will understand their language… 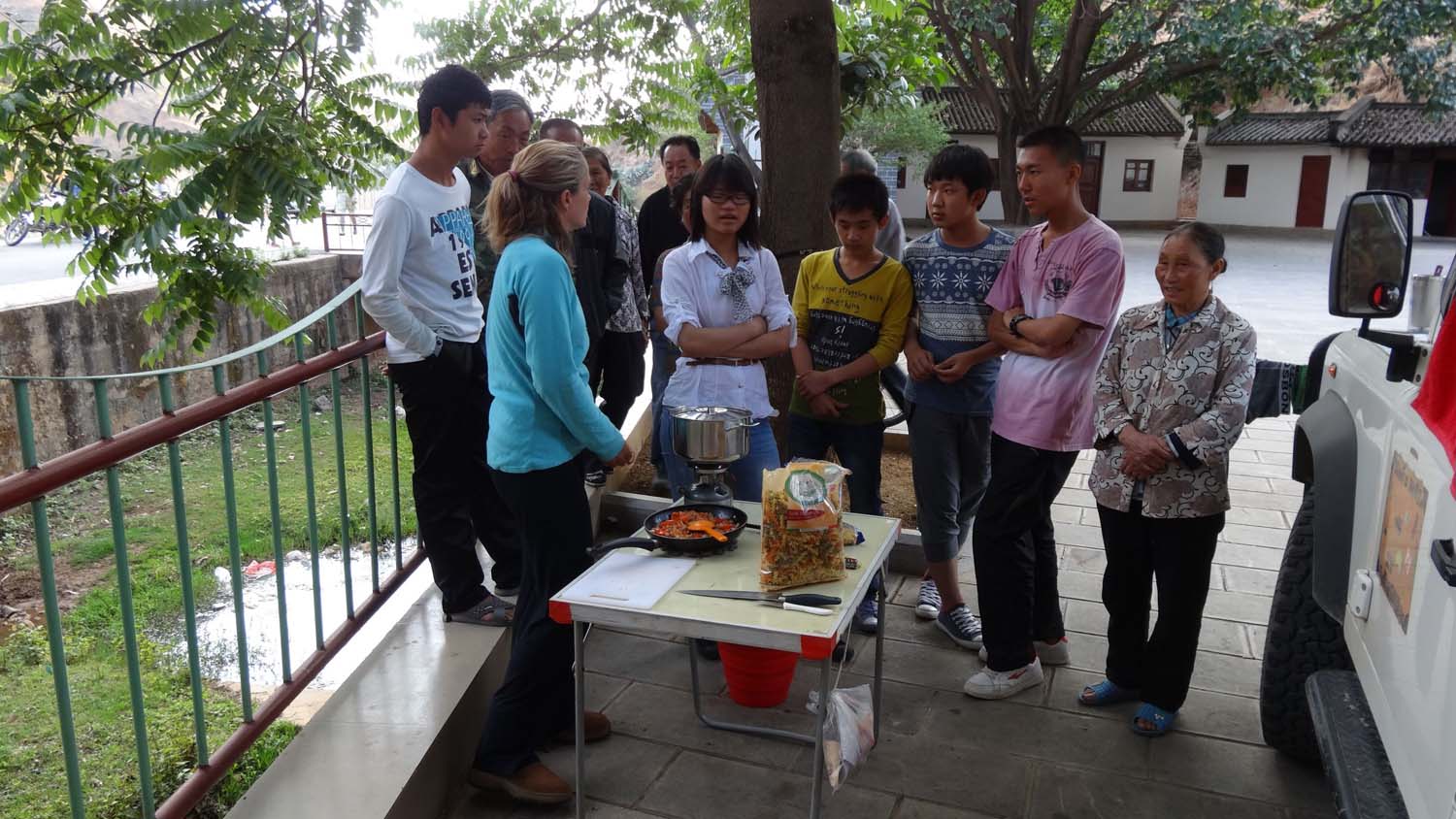 cooking dinner with an audience, one of the 15-year olds spoke a little English which was nice

Talking loudly is anyway something the Chinese excel at, they love shouting at each other at the dining table (including restaurants), on the street, in the market, at temples, in national parks and at tourist attractions (even at the panda base where there are many, many signs everywhere saying ‘I am the national treasure and I don’t like noise, please be quiet’). They love to have shouting matches with strangers across tranquil valleys deep in national parks. It’s almost like they hate silence. They even take little radios into national parks and tourist attractions. Not to listen to it privately with earphones. No, everybody must be able to hear it, so they play it loudly. Sometimes so loud the music deforms. But our best ‘noisy’ experience has been on a boat trip to the 3 little gorges.

Here, the crew used the PA system on the boat to talk to the passengers. For hours (I am not kidding). It was deafening. Escaping the PA system from inside meant braving the photographers and their assistant saleswomen, also with their microphones on the front and back deck. After just over 2 hours on this large boat (that was only one-way) we were herded to smaller boats to see the 3 little gorges. Finally, peace and quiet we thought. Wrong! Every boat had its own guide armed with, you guessed it, a microphone. For the entire 45 minutes on the small boats he managed to shout at us and even sing to us, the Chinese clapping, laughing, singing along and shouting back at him when prompted! The only few seconds he was quiet was to let us listen to a motion triggered recording of bagpipes!?! 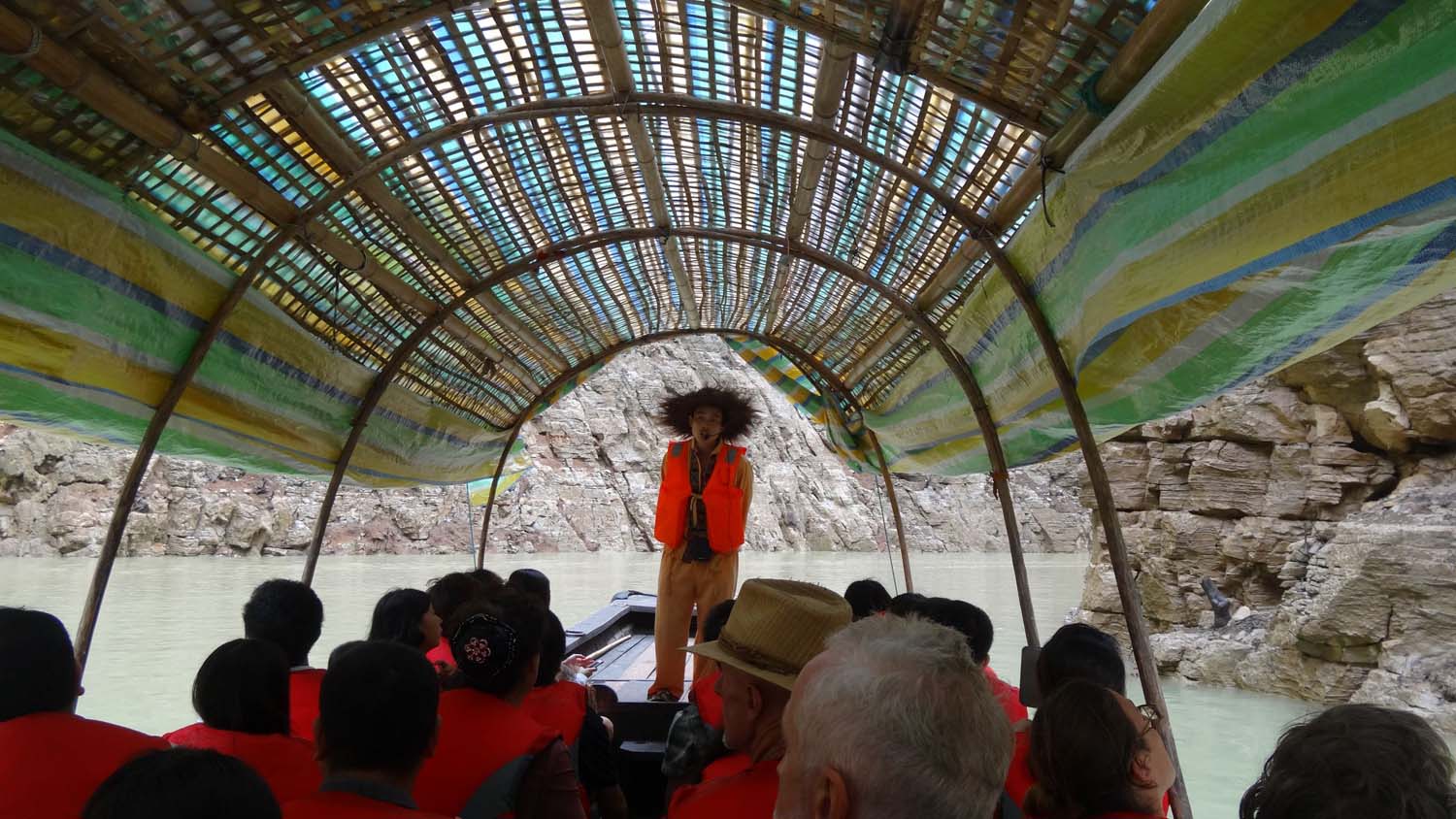 our guide in the small boat in the 3 little gorges, he was probably singing here

On the road the Chinese seem to have no spacial awareness, they lack the most basic driving skills, hoot at anything that moves and see no issue with overtaking on blind corners. This can cause some hilarious situations, but also quite dangerous ones. Anything and everybody moves onto the road, into traffic, without looking. They just pull out. Cars, motorbikes, trucks, buses and even cyclists and pedestrians. We don’t know traffic mortality in China, but it must be high (we later checked, it’s 600 deaths a DAY!). Our little convoy has been lucky, we only had one minor bingle when one of the trucks drove into the back of a sedan which had just cut him off and then hit the brakes hard to stop for the orange light… 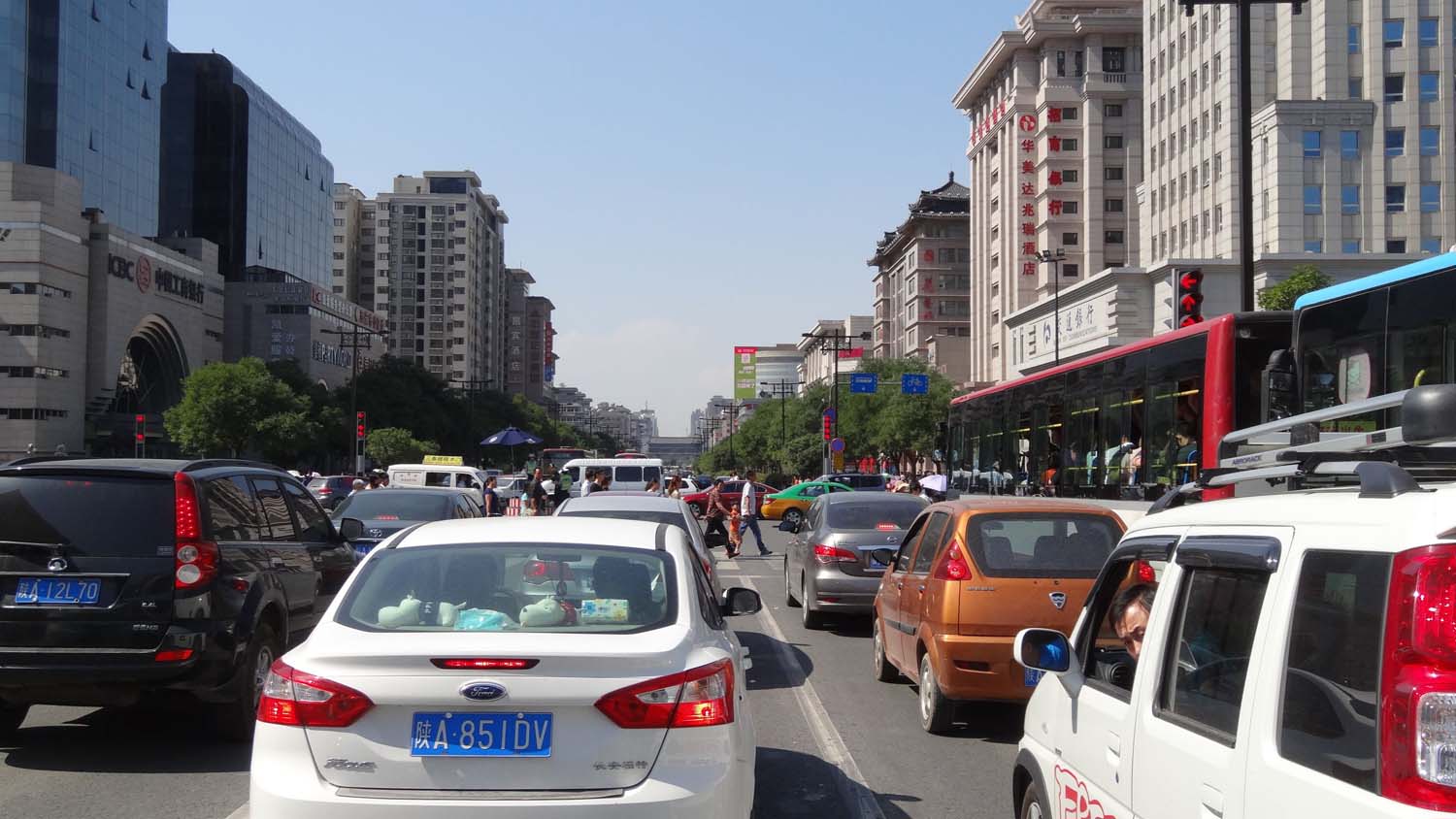 Have we told you about the spitting yet? You’ll love the spitting. Well, it’s not so much the spitting but the sounds that are made to get to the spitting part. Just try it: make a ‘gggg’ sound from deep in your throat, make it last a few seconds and then try again. Repeat this process a few times and spit when needed. Once you’ve got that one out of the way, you are ready for an almighty burp. But wait, before you let it go, make sure you are right next to somebody’s ear and then let it all out. There, feel much better? And don’t think because you are young or female that you are exempt from spitting. They all do it, everywhere. Yes, even in restaurants, supermarkets, on the street, in the toilets, in temples, just everywhere!

We’ve also decided not to pursue a career in the music or film industry, or anything else that could attract paparazzi. In the beginning it makes you feel pretty good about yourself that so many strangers want a photo of you, even with you. And of course Lara is extremely popular too, also whilst driving and the Chinese get their cameras and phones out to snap a picture of our amazingly cool looking Lara. The number of people posing in front of Lara to have their picture taken is crazy. We’ve all seen it before, but the Chinese are definitely trigger-happy! After a while it becomes a bit annoying though. Having a camera shoved in your face at every moment of the day is not nice (it makes picking your nose in private so much harder too). 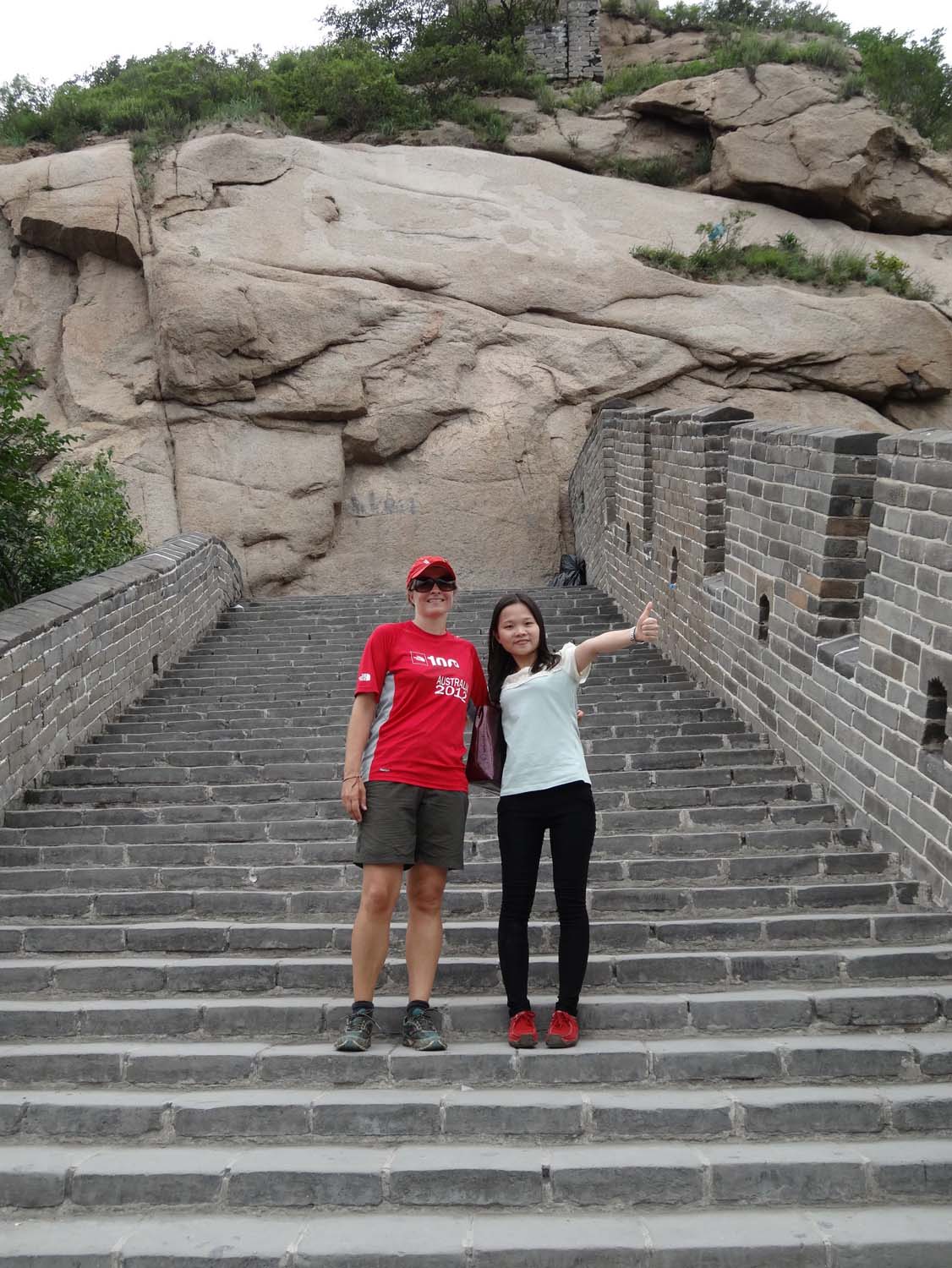 can I please take a photo with you? not really sure what they will do with these photos

The last thing we want to mention here is the number of Chinese. Hundreds and hundreds flock to tourist attractions like bees to a honey pot. The scary thing is that we were here in the low season. High season started around the time we were heading for the Mongolian border. They all want the same thing, ride in a golf buggy around the attraction or park, get on the cable car, have their photos taken by ‘professional’ photographers (preferably in rented traditional costumes). It is like a giant heard of sheep. One incident we still cannot believe: every passenger on our boat trip to the Three Little Gorges was ‘given’ a key ring and then asked to pay for it. Every Chinese person paid up for the ugly thing, and the guide look astonished when we gave the ugly thing back to him… 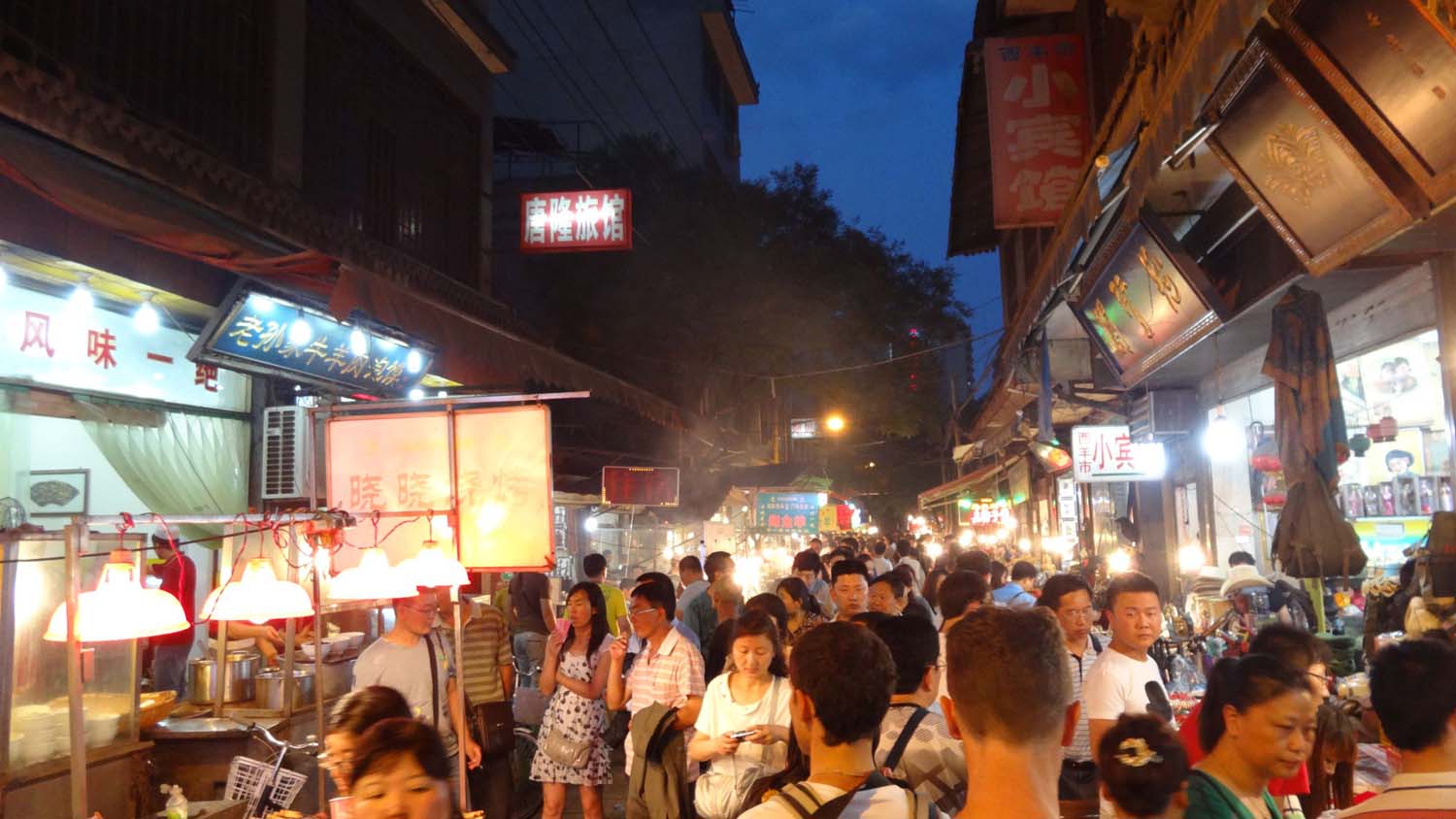 we loved the islamic quarters in Xi’an, busy but very friendly and great food 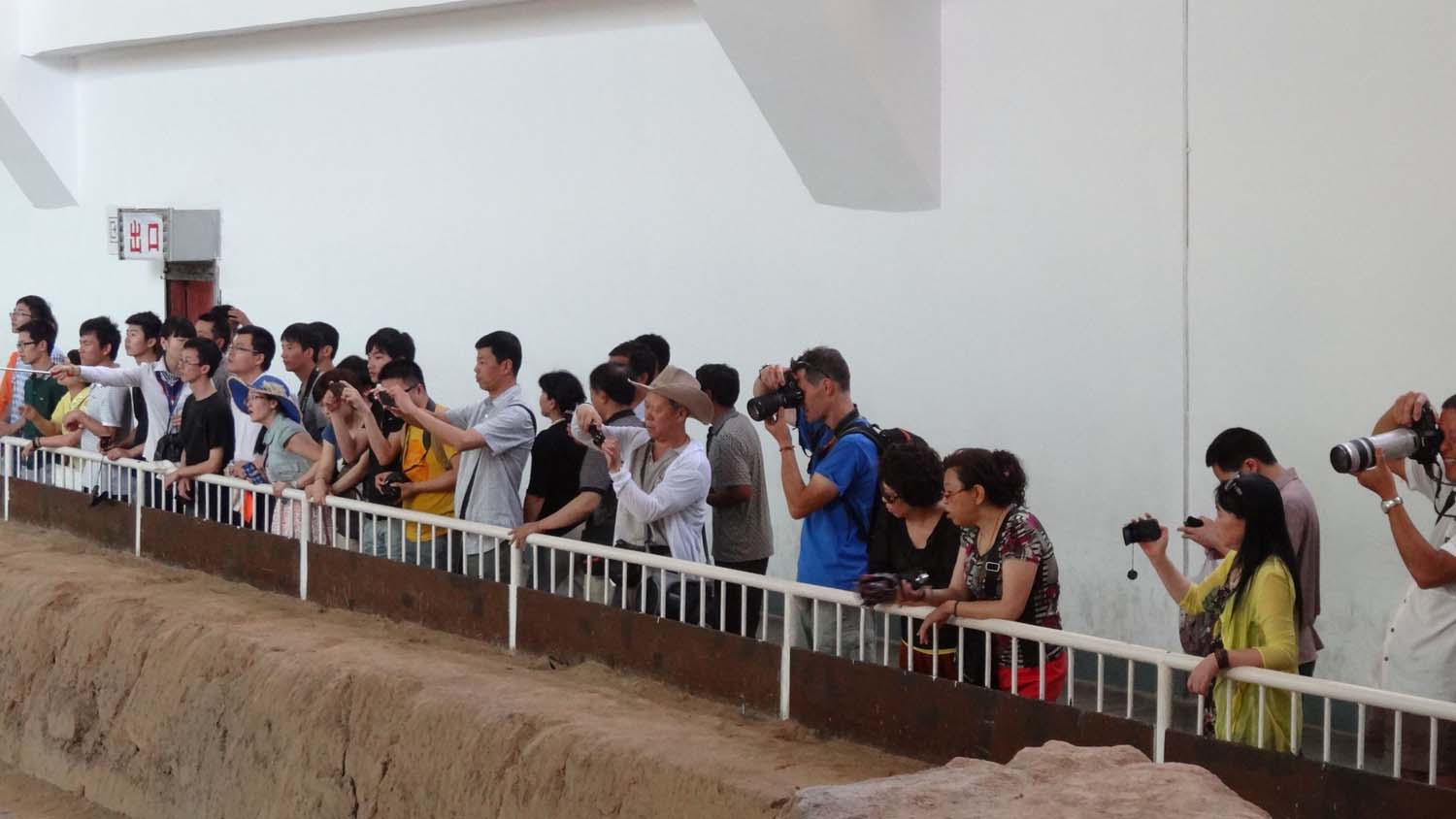 this was early morning crowds at the terracotta warriors

China is not just full of people like the ones we just described, we know we are generalising, and we have definitely met our fair share of wonderful Chinese people who are very polite, extremely helpful and very interesting to talk to. We even ate at a restaurant once where nobody talked loudly or spat all evening! 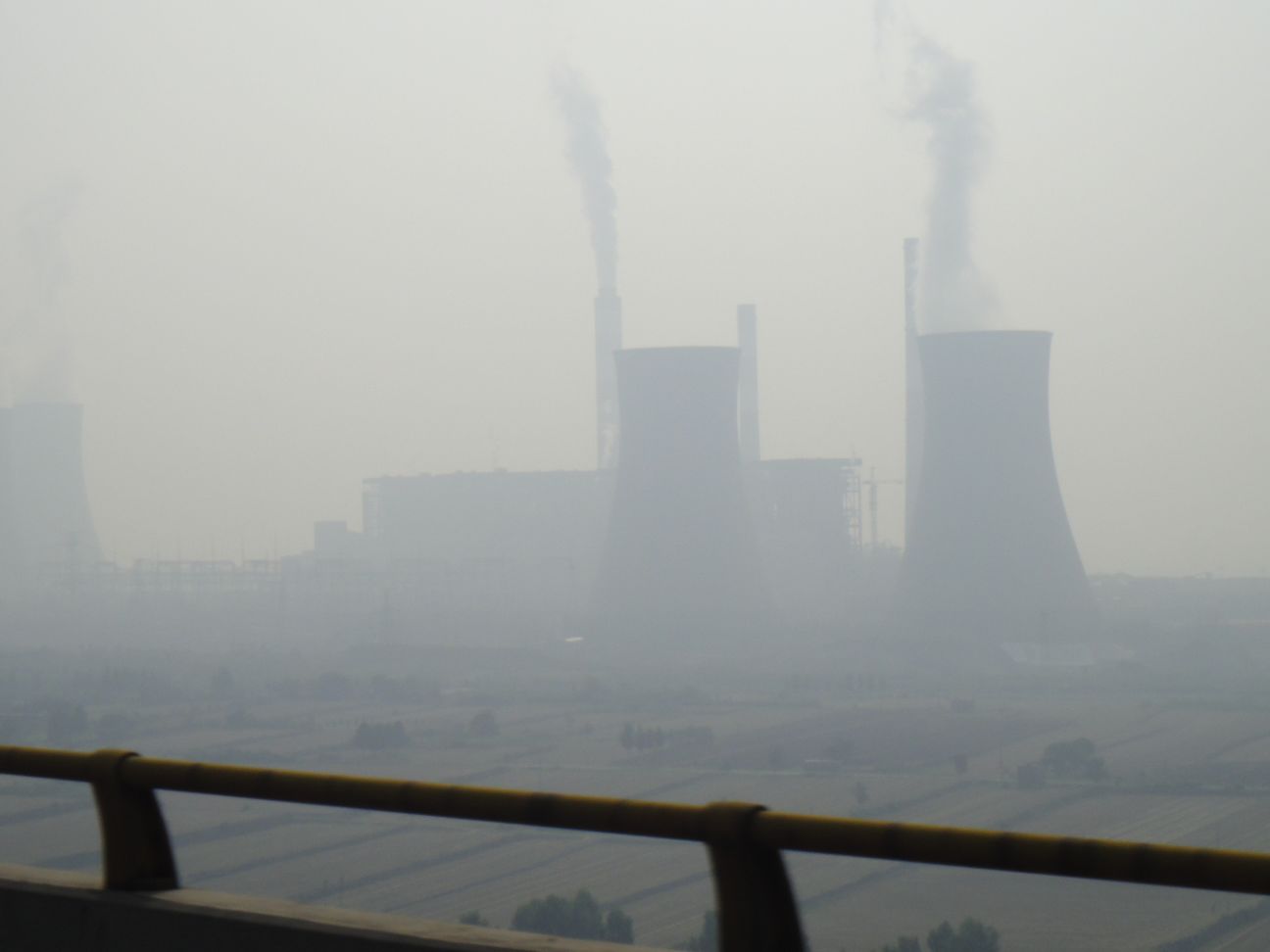 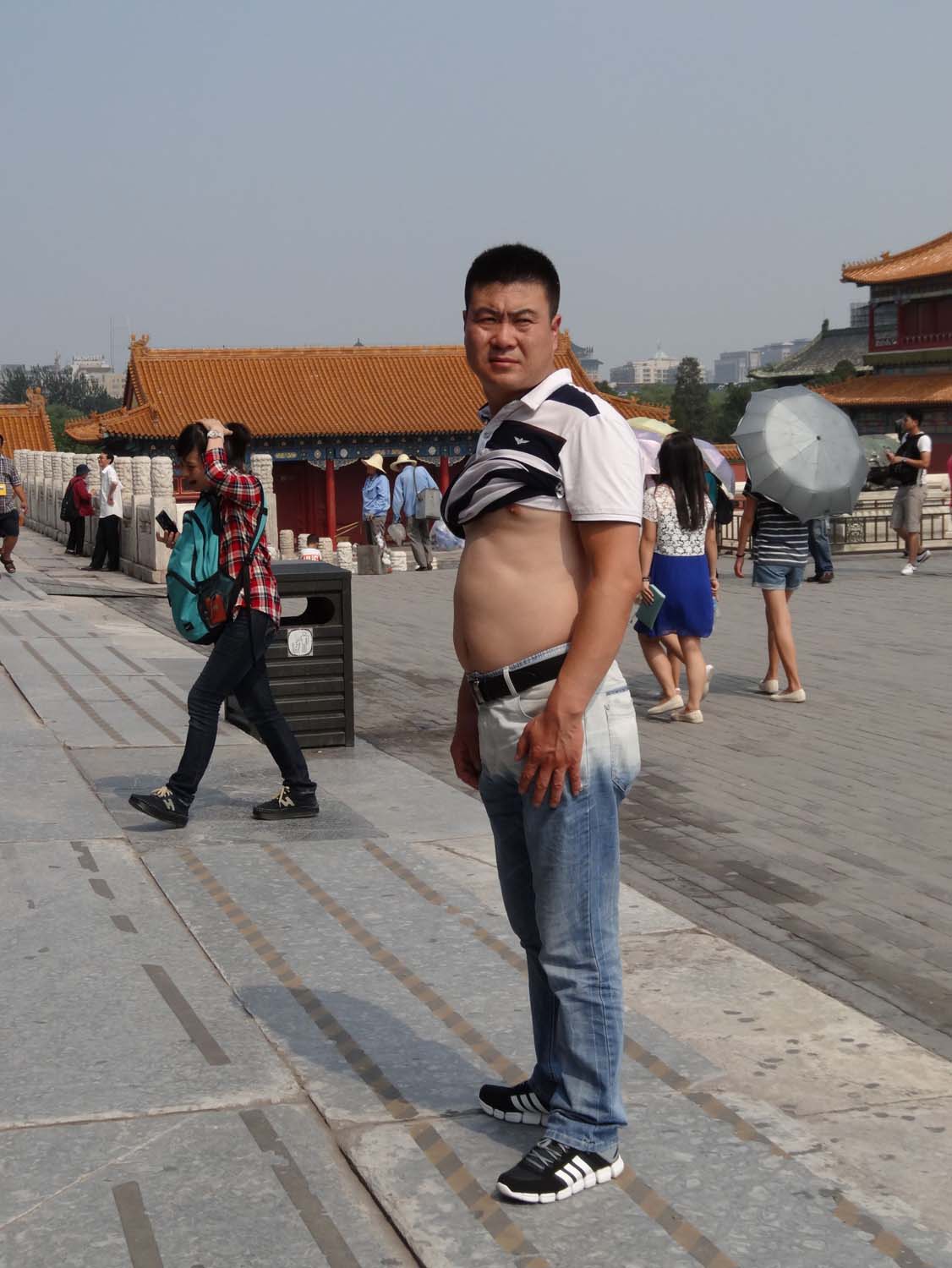 Chinese men looove showing their bellies, the bigger the better! 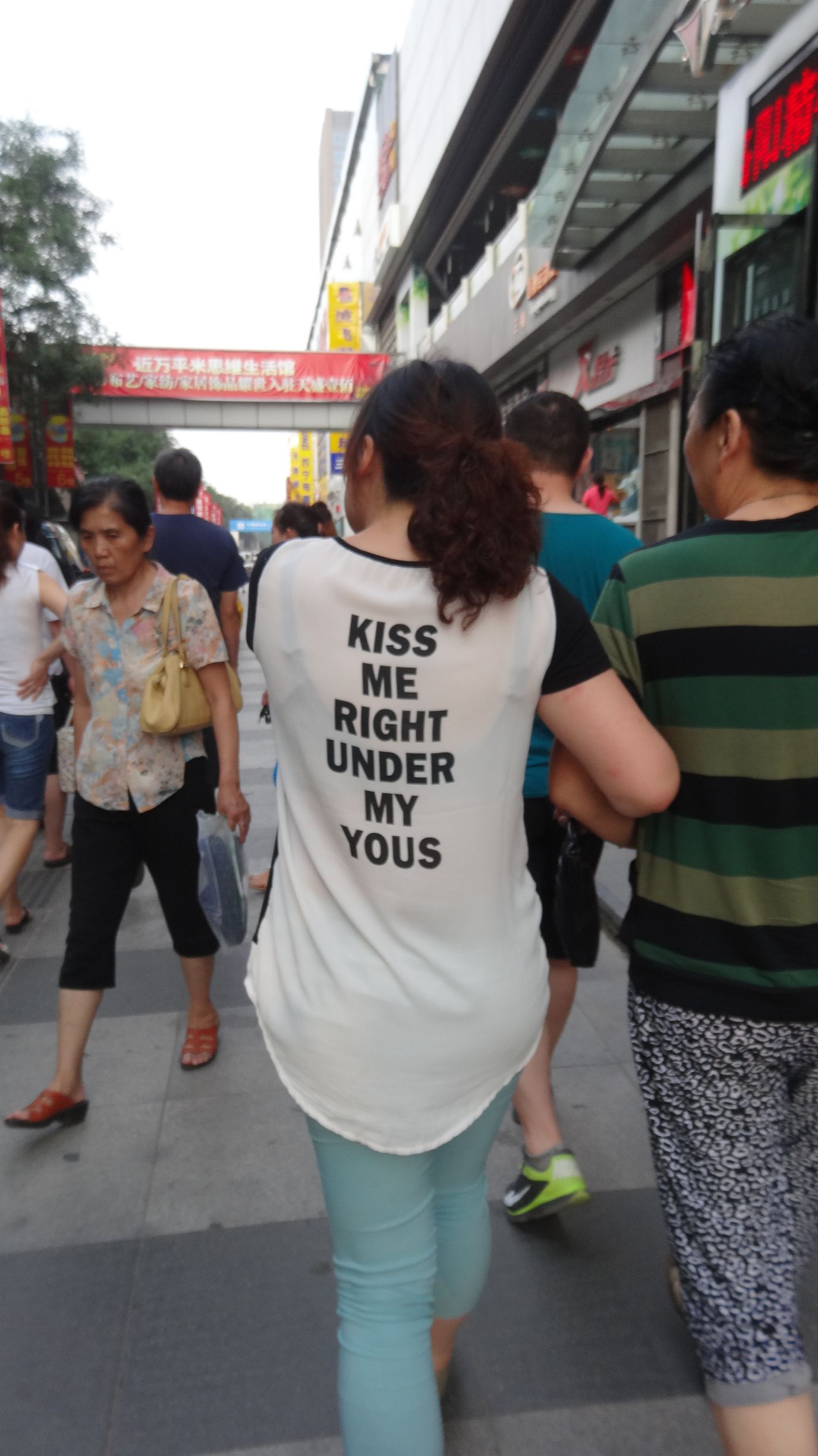 WTF?! Let us know if you understand what this is suppose to say… 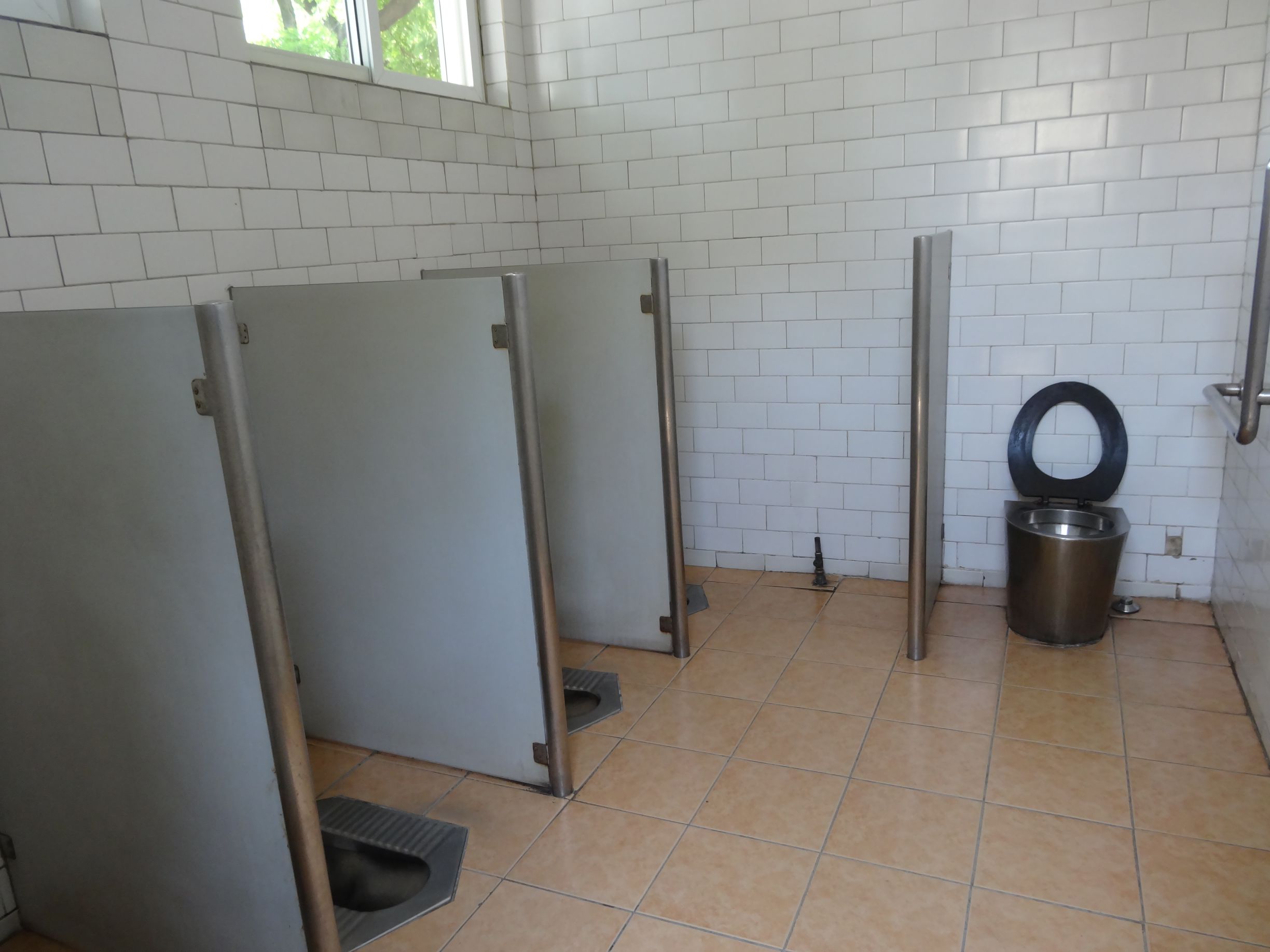 your choice of squatting or western toilet, which one do you prefer? 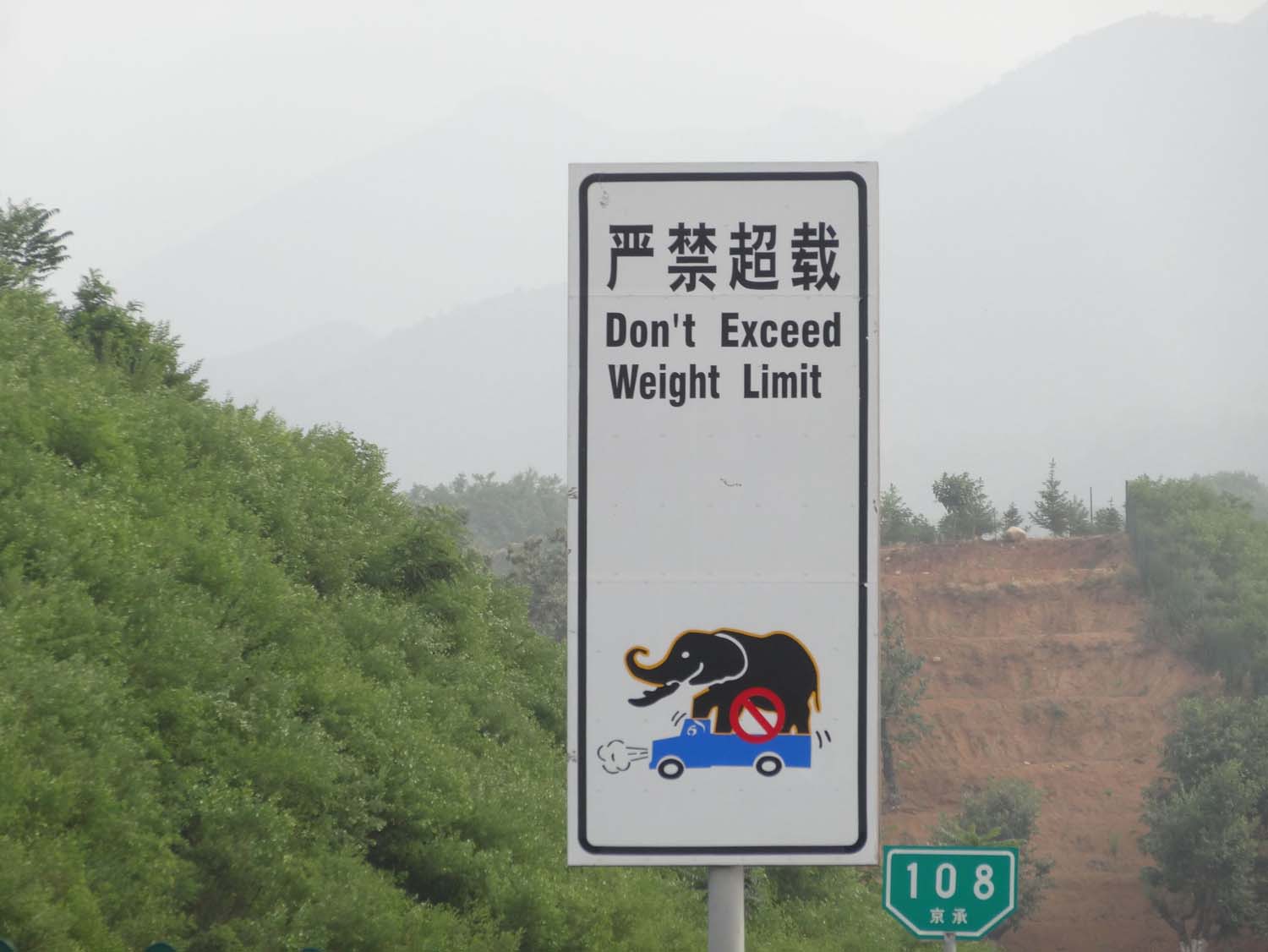 they had signs with giraffes and turtles too, so cute