Most important things first: happy birthday mum!! Hope you have a wonderful day, I’ll call as soon as I can. Love, jxxxxx

Khan Tengri is a 7000+m mountain situated on the borders of China, Kyrgyzstan and Kazakhstan, with the huge Inchelyk glacier flowing down one of its flanks. Our plan was to hike to its climbing base camp (5-6 day hike) and then take a helicopter ride back. Unfortunately it was not to be.

We had already heard worrying news about a case of the bubonic plague in the area and as we arrived in Karakol our fears were confirmed. Yes, a young kid had died of the bubonic plague and the area around Khan Tengri was in quarantine. We had a chat with some local guides and decided on a ‘plague free’ hike in the Tian Shan mountains instead. The first 3 days we would require a guide as we would cross a glacier and a high pass on the second day. The last 2 days we would walk on our own.

As the first day was only a short hike, we decided to leave late, giving us time to visit the weekly animal market. This is reputedly one of the biggest in Central Asia and we watched as sheep, goats, cows and horses were prodded, pushed, squeezed, lifted and checked before negotiations started and eventually money changed hands. The new purchase would then under noisy protests be dragged into the back of a truck or dumped into the boot of a Lada. 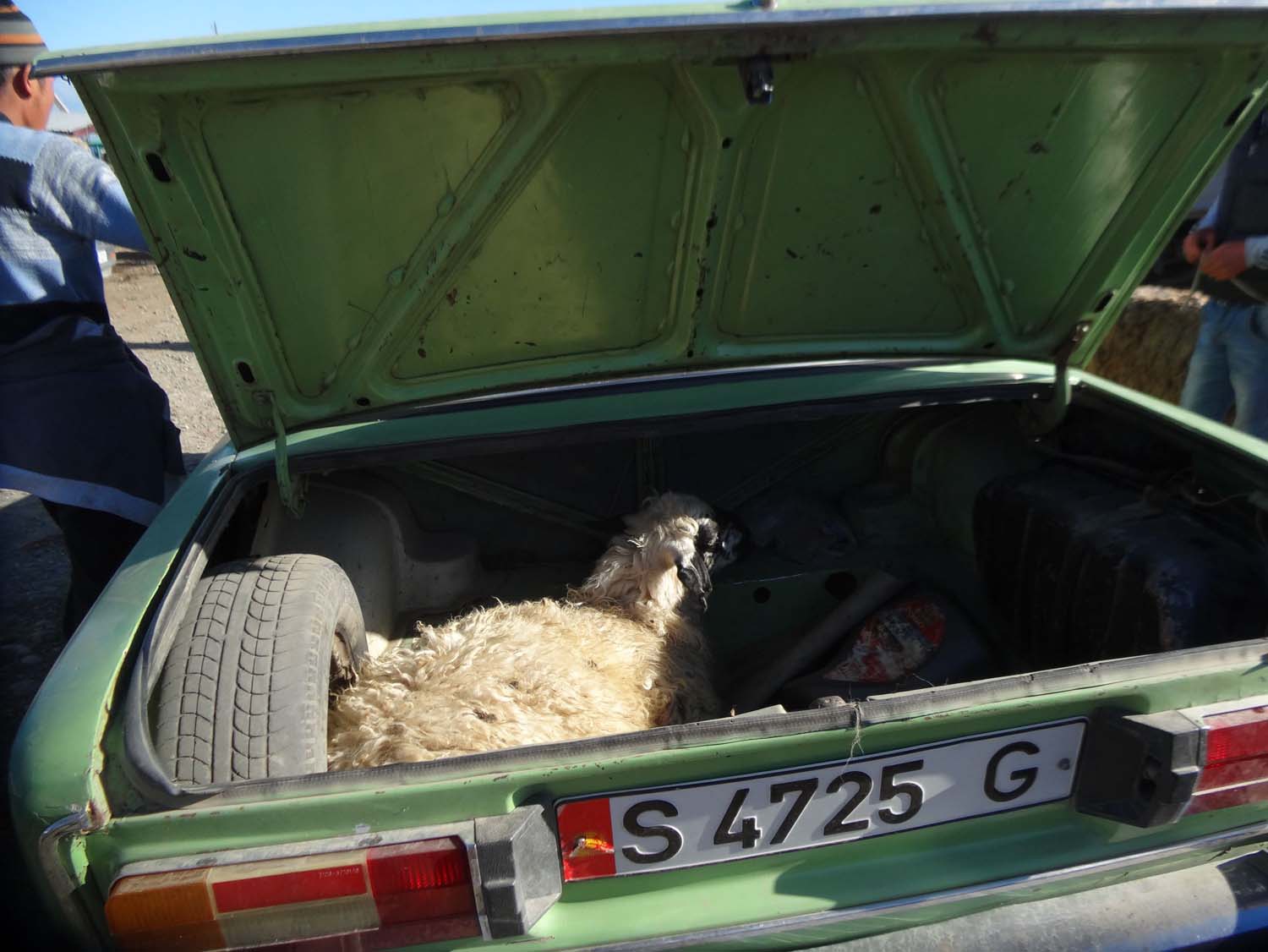 how do you transport your new sheep? in the boot of course

We bumped into a Dutch couple Onno and Tamar when running around town the day before the hike. They had just arrived from Bishkek and also planned to hike and in the end decided to join us. They were keen, but had no equipment or (as it turned out later that night) means to get out cash as all of the many banks in Karakol would only accept Visa cards. In the end everything was sorted and at 11am we were ready to go.

We all loved the look of the 45 year old Russian jeep we were piling into with 4 big bagpacks and our driver / guide Dima. A little later on the steep, rocky and muddy tracks of the Karakol valley we weren’t quite so happy as the jeep kept breaking down (wouldn’t happen in a Land Rover). Dima had to spend some time under the bonnet each time to get the thing started again. Eventually the jeep gave up all together and our frustrated guide, a man of few words, stormed off back down the track on foot. He soon returned and declared ‘other car coming’, obviously his phone call back to the office had the desired effect.

An hour later a Russian van came flying up the hill. We decided this would make an awesome cheap 4WD campervan as there is loads of space inside, it’s simple, they go anywhere and only cost $3500 (a good secondhand one). Accompanied by loud Euro / Russian pop songs (none ever got to the end) we drove 10 minutes before we stopped again. Our driver must have been told to get going straight away as he now disappeared into the bush with a role of toiletpaper and a pack of cigarettes. Dima had to bring his lighter to him after a few minutes… 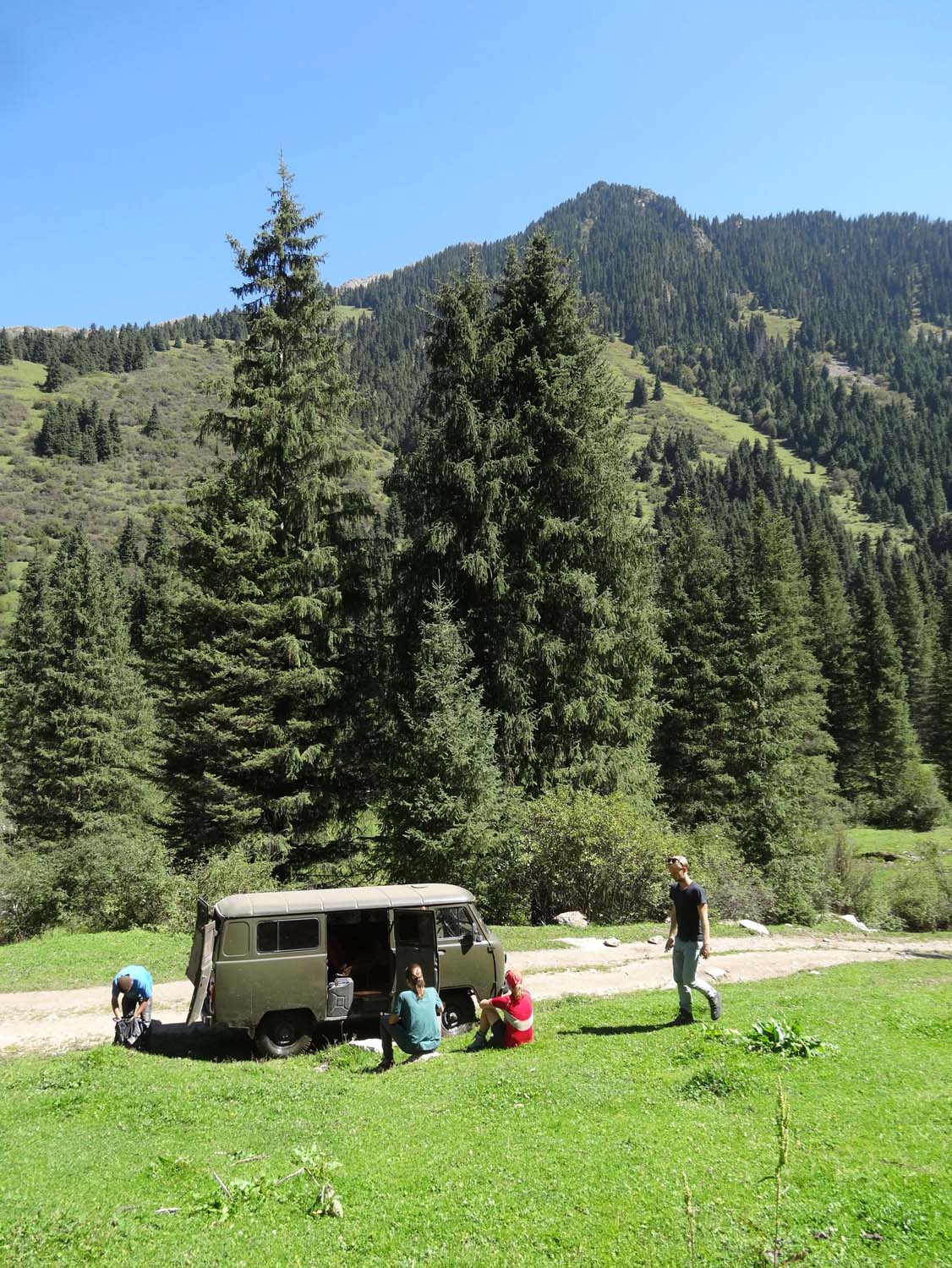 All this, and the fact that Dima still had to pack his bag when we got to their trekking base camp meant we had a much later start to the hike then planned. Around 7pm we finally reached our camp at the foot of the glacier and we quickly prepared dinner before it got dark. It was cold so we all retreated to our tents early, although we did spent quite a bit of time admiring the stars against the magnificent backdrop of the snow-covered Peak Karakol which emerged ahead of us. 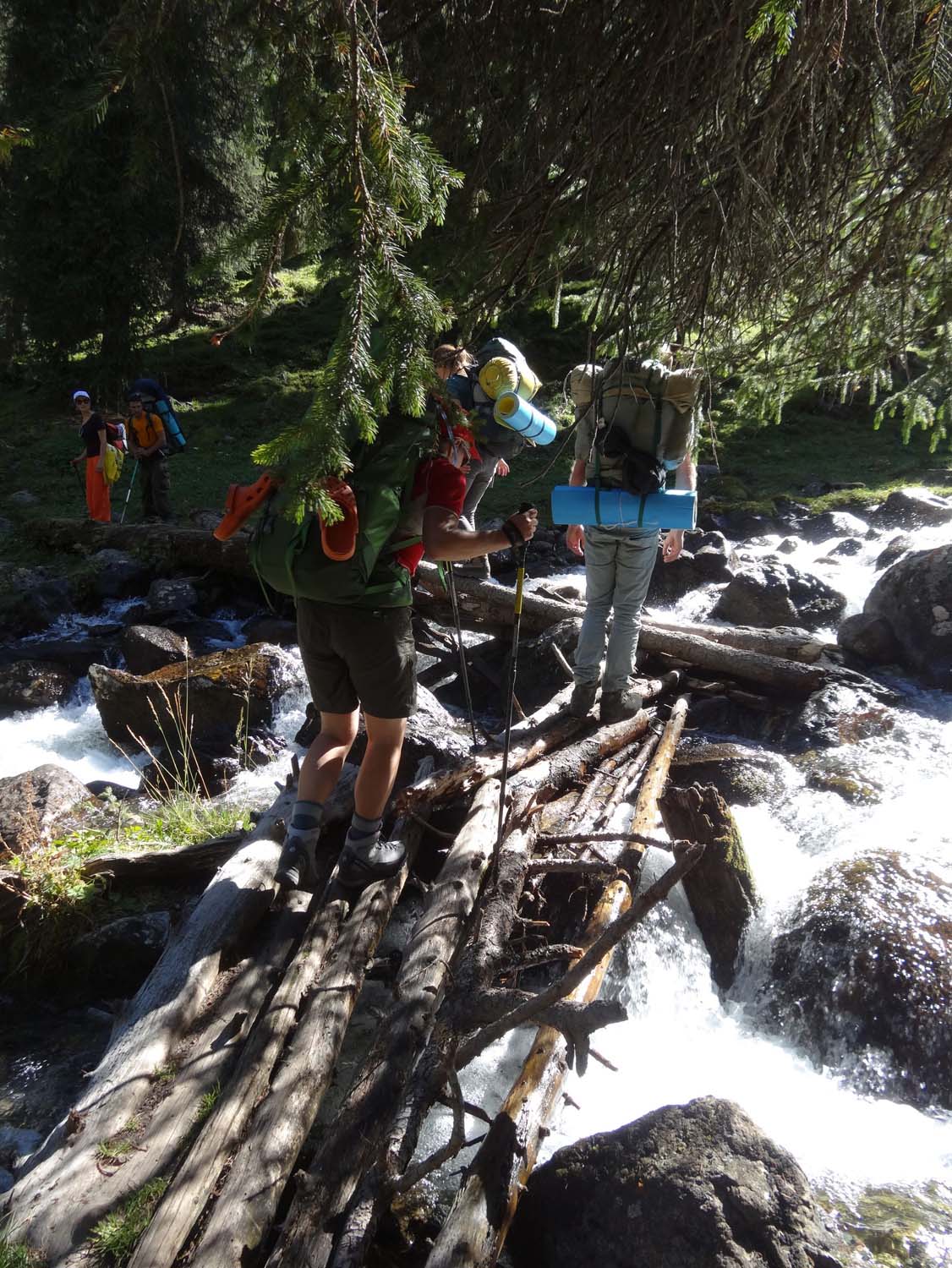 start of our hike in the low valley 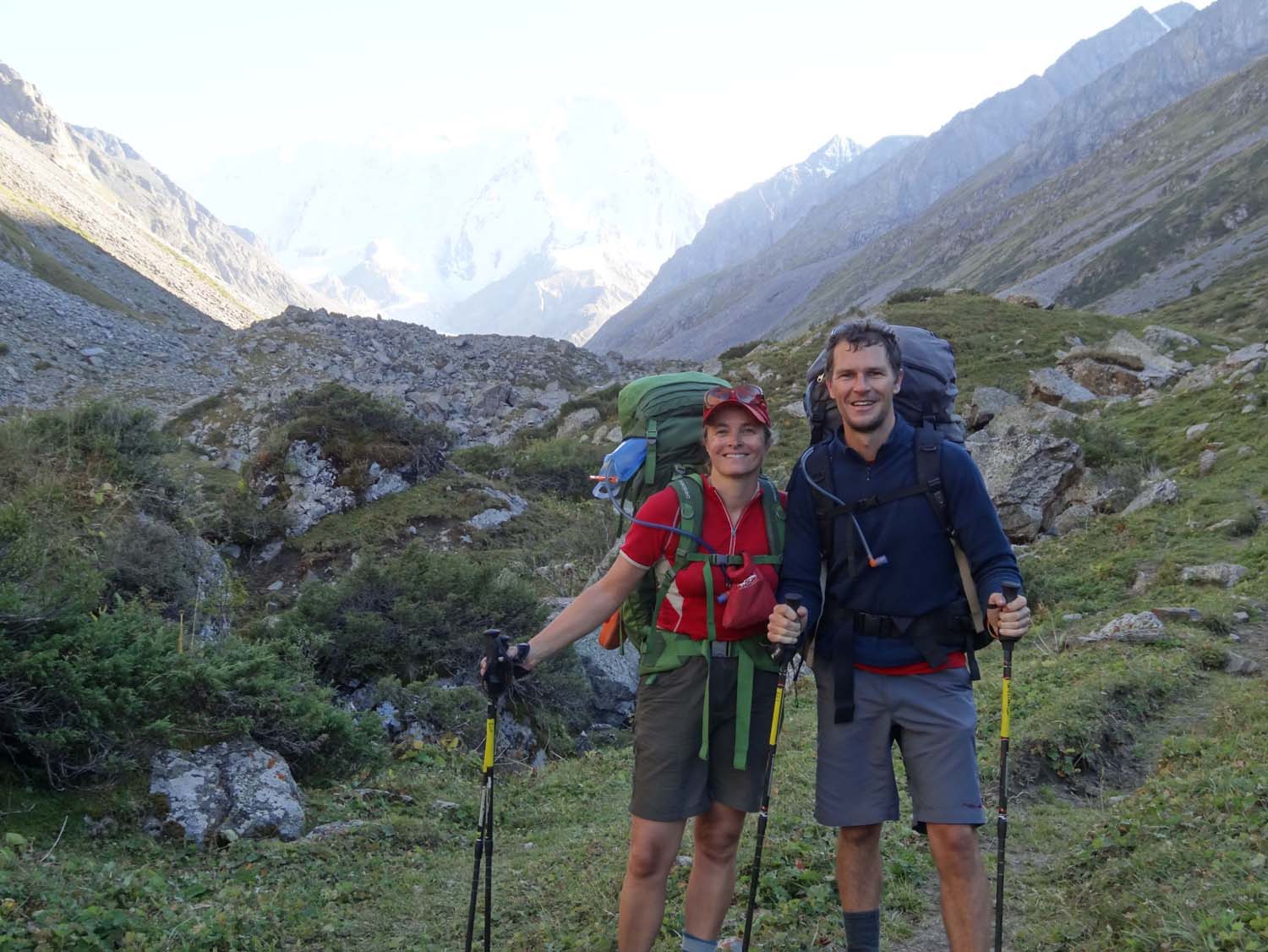 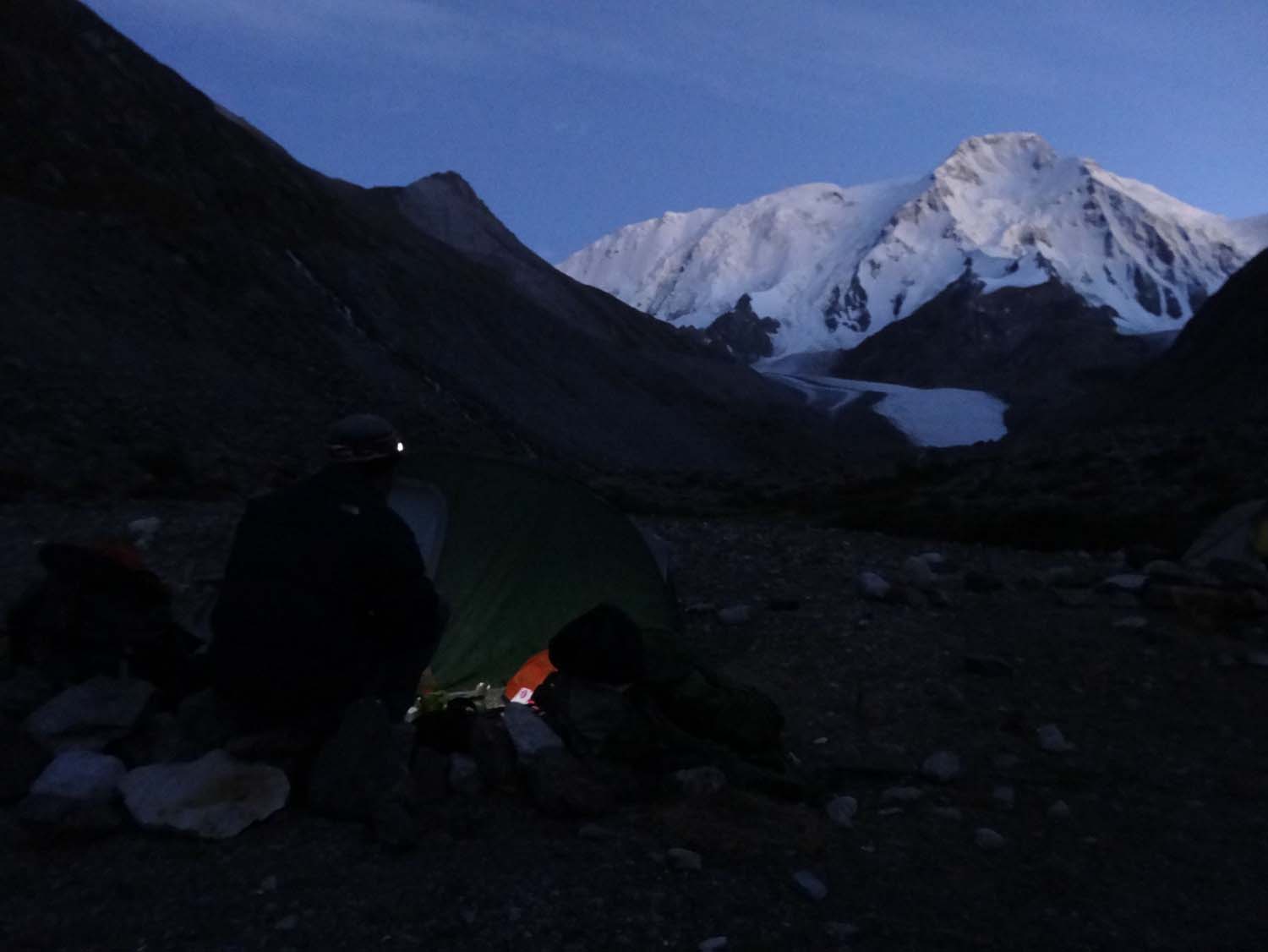 The next day we left late again (9.30) as our guide preferred to spent time in his tent with the girl he had brought on the hike. His girlfriend was too precious to carry anything and certainly didn’t spend a minute outside as soon as the tents were pitched. 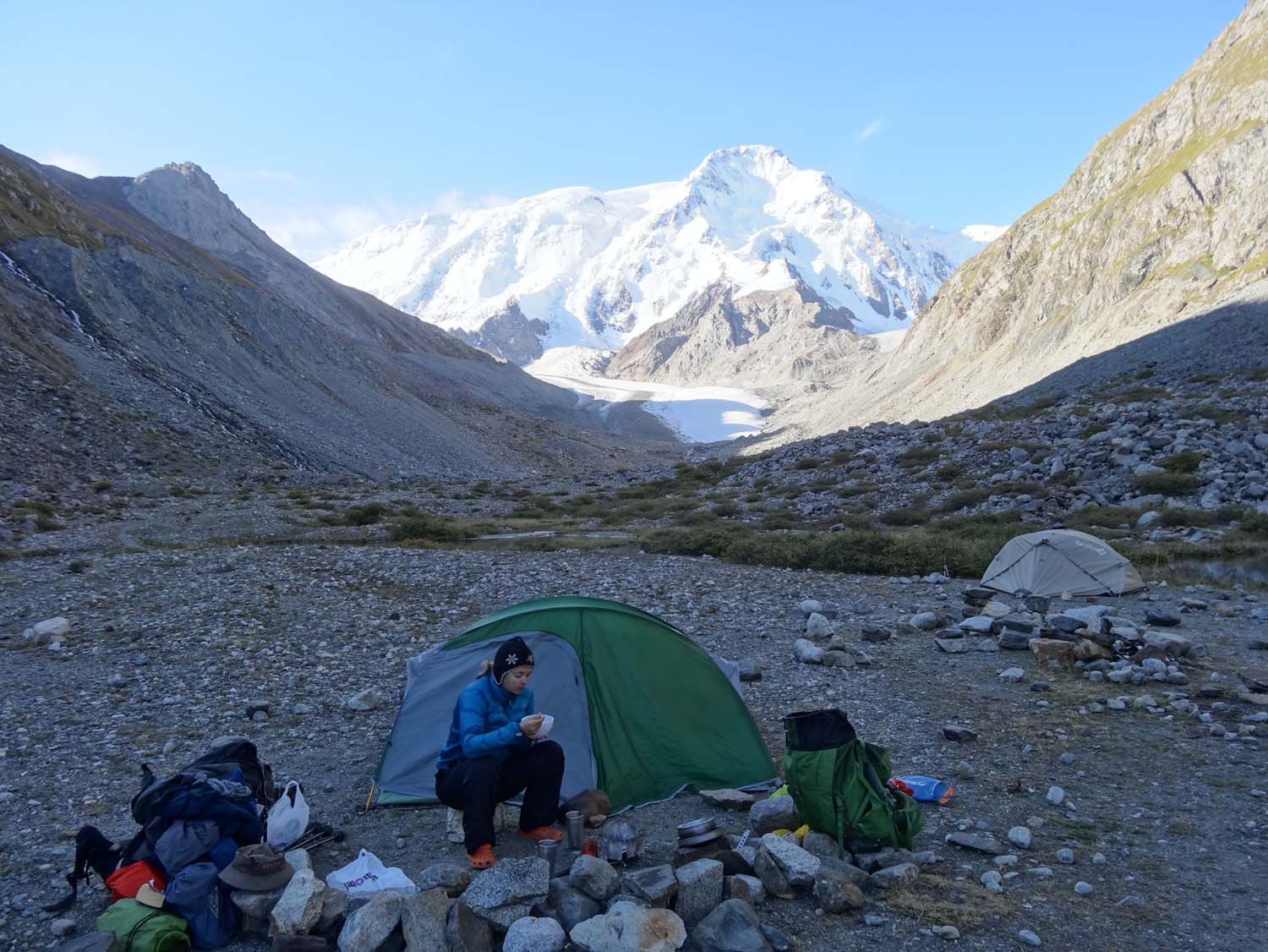 breakfast, still with the amazing view

The hike was sensational, the scenery of deep glacial valleys surrounded by towering snow covered mountains simply stunning. The glacier showed all its amazing features to us throughout the day. The first section we walked with our crampons on and roped together, but that was only a small part of the glacier and to be honest it would have probably been better to rope up later that day as we reached the pass. That’s where the crevasses were still hidden by snow which we gingerly found our own way through as our guide was preoccupied with his girlfriend. 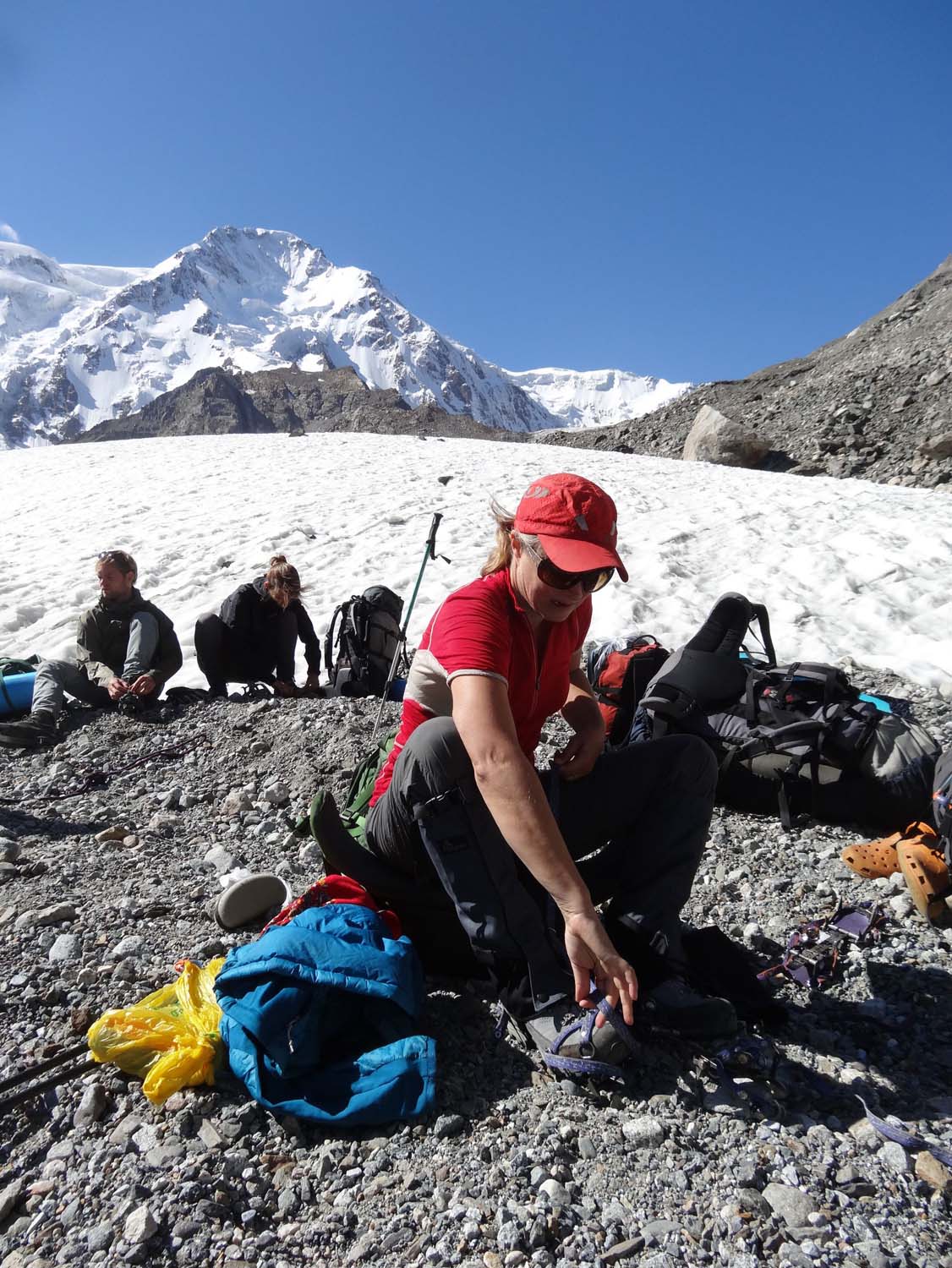 putting on our crampons 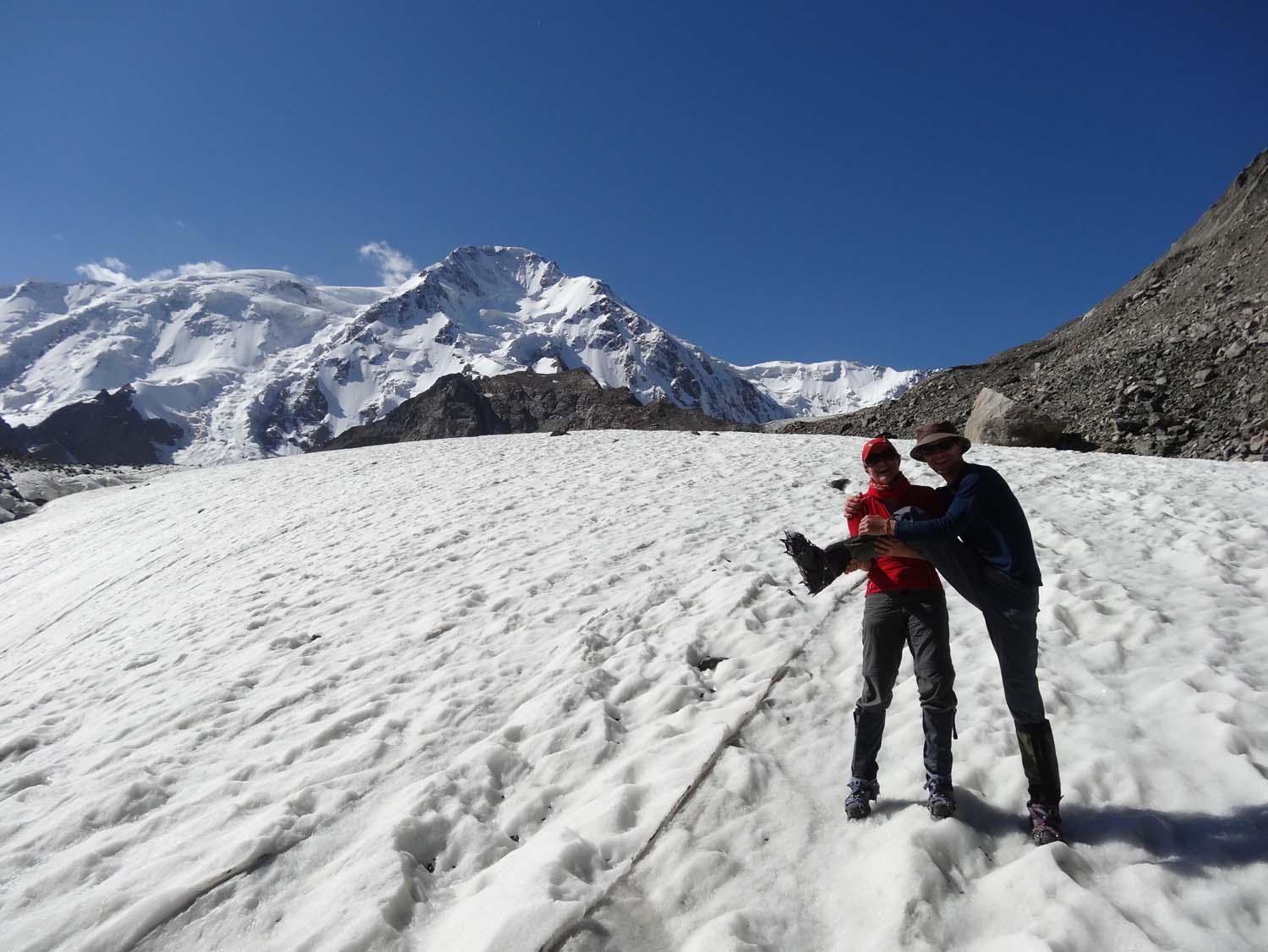 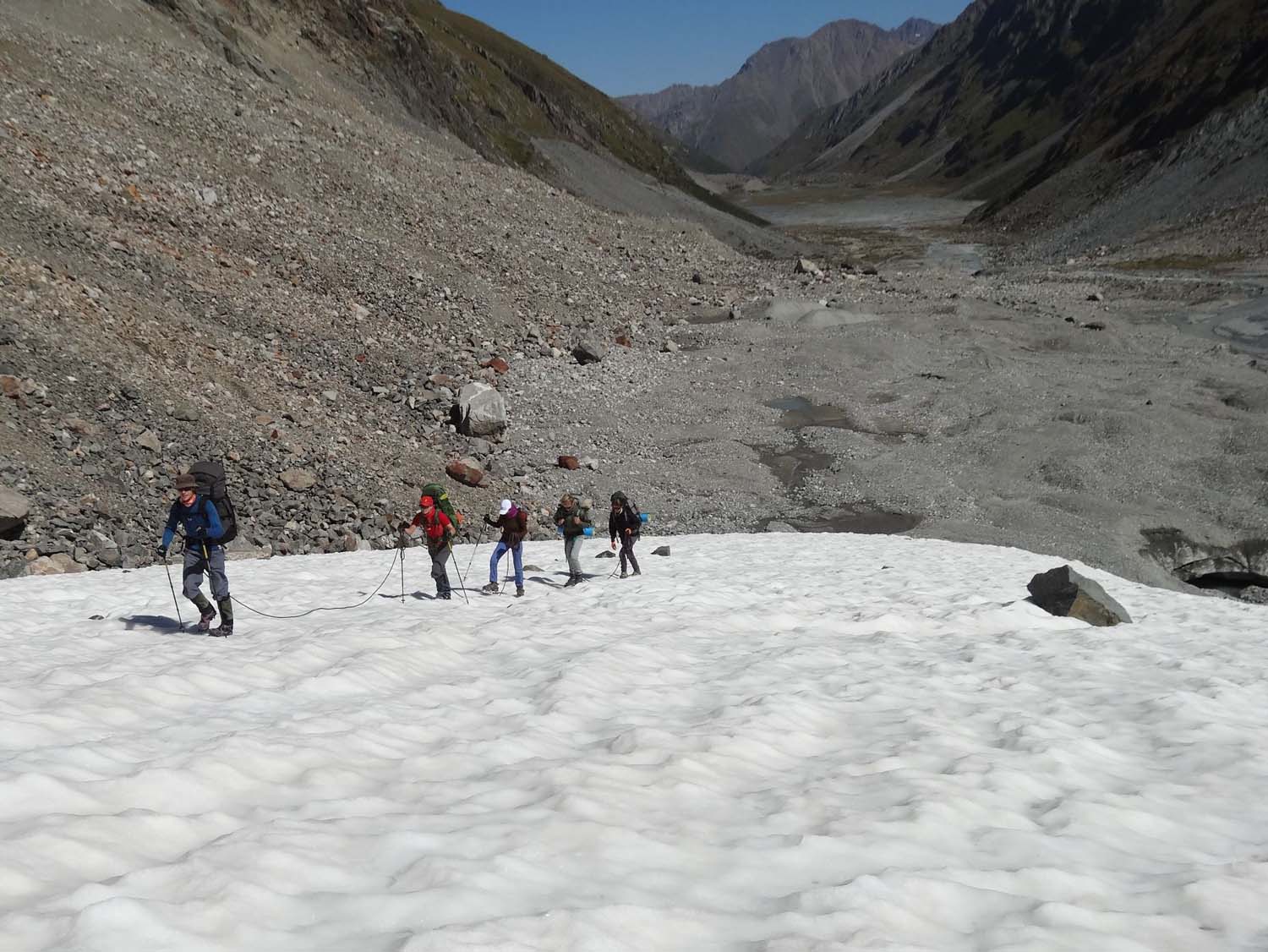 roped in, onto the glacier 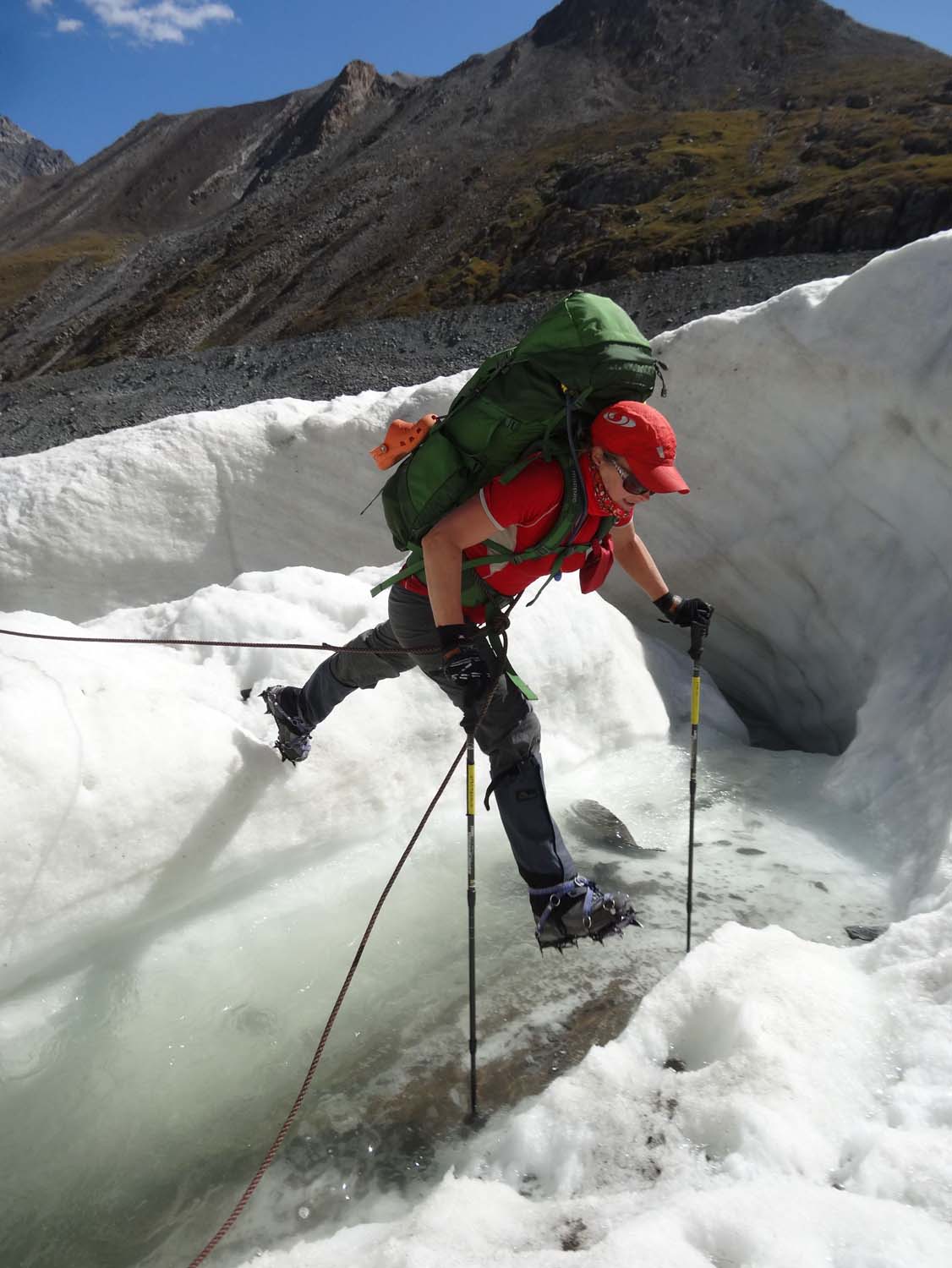 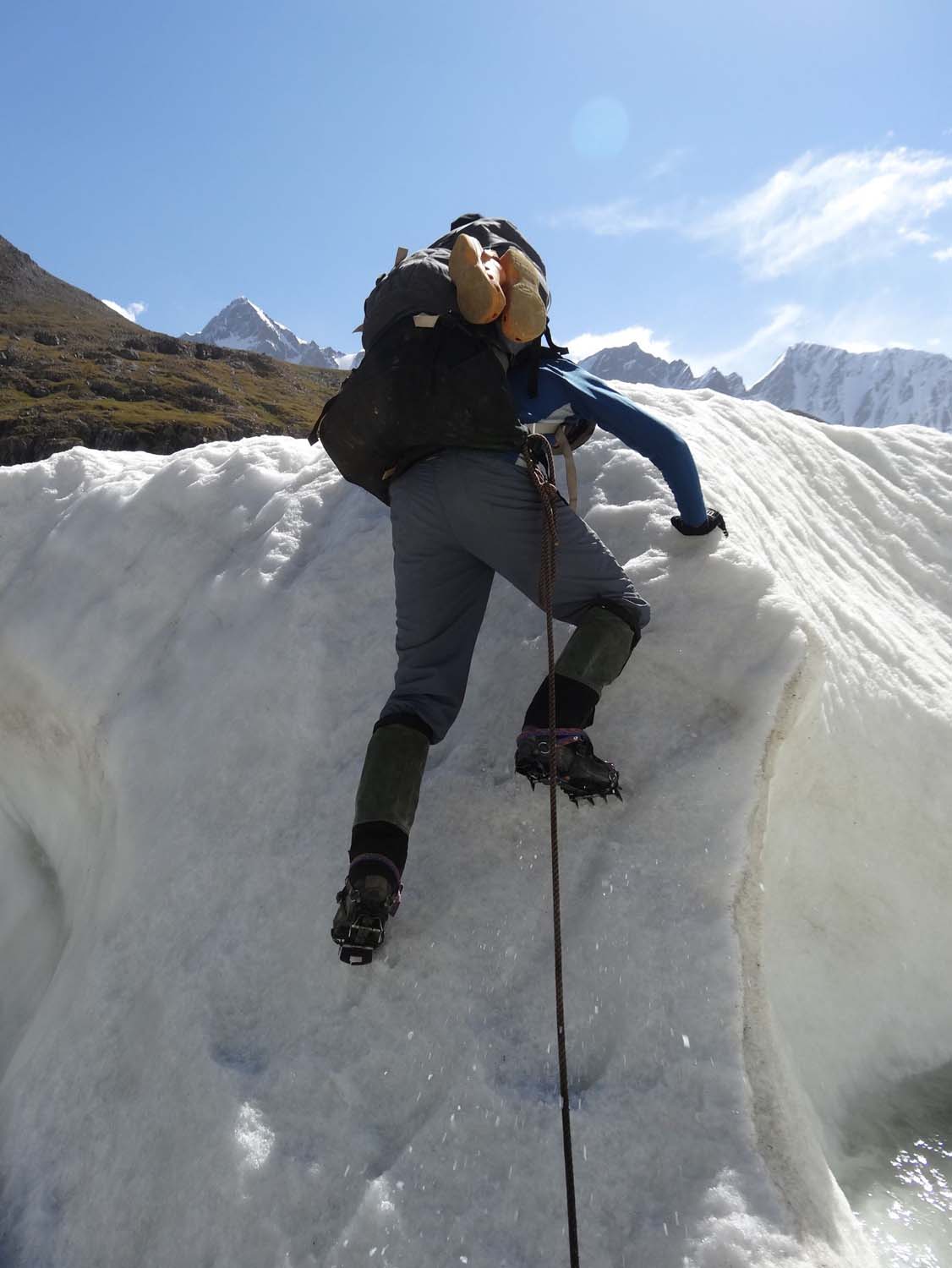 crampons make it easier to get up ice walls though 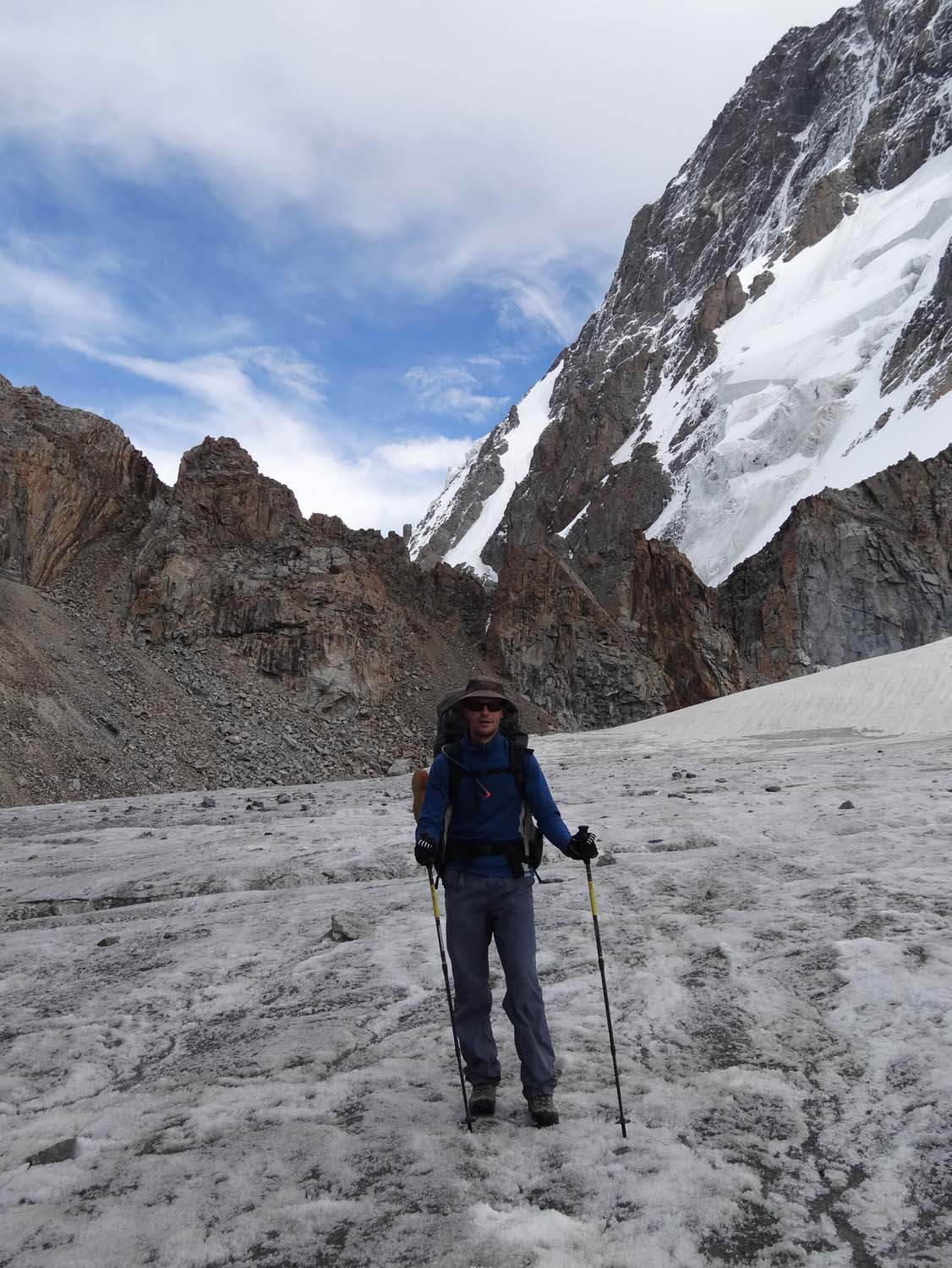 nearly at the top, we cross the pass directly above Jon’s head

The pass into the next valley was a very steep, scree covered slope of small and big rocks which Dima thought best to race up, all close together without any attempt to stop rocks sliding and rolling down onto the person behind. We quickly realised it was better not to be anywhere near our guide as avalanches of rocks came tumbling down, luckily most of them didn’t hit anybody. Slowly we worked our way to the top of the pass at 4020m and we all enjoyed the view of the next valley until the adrenaline had subsided and we ran down the glacier on the other side through the slushy snow. 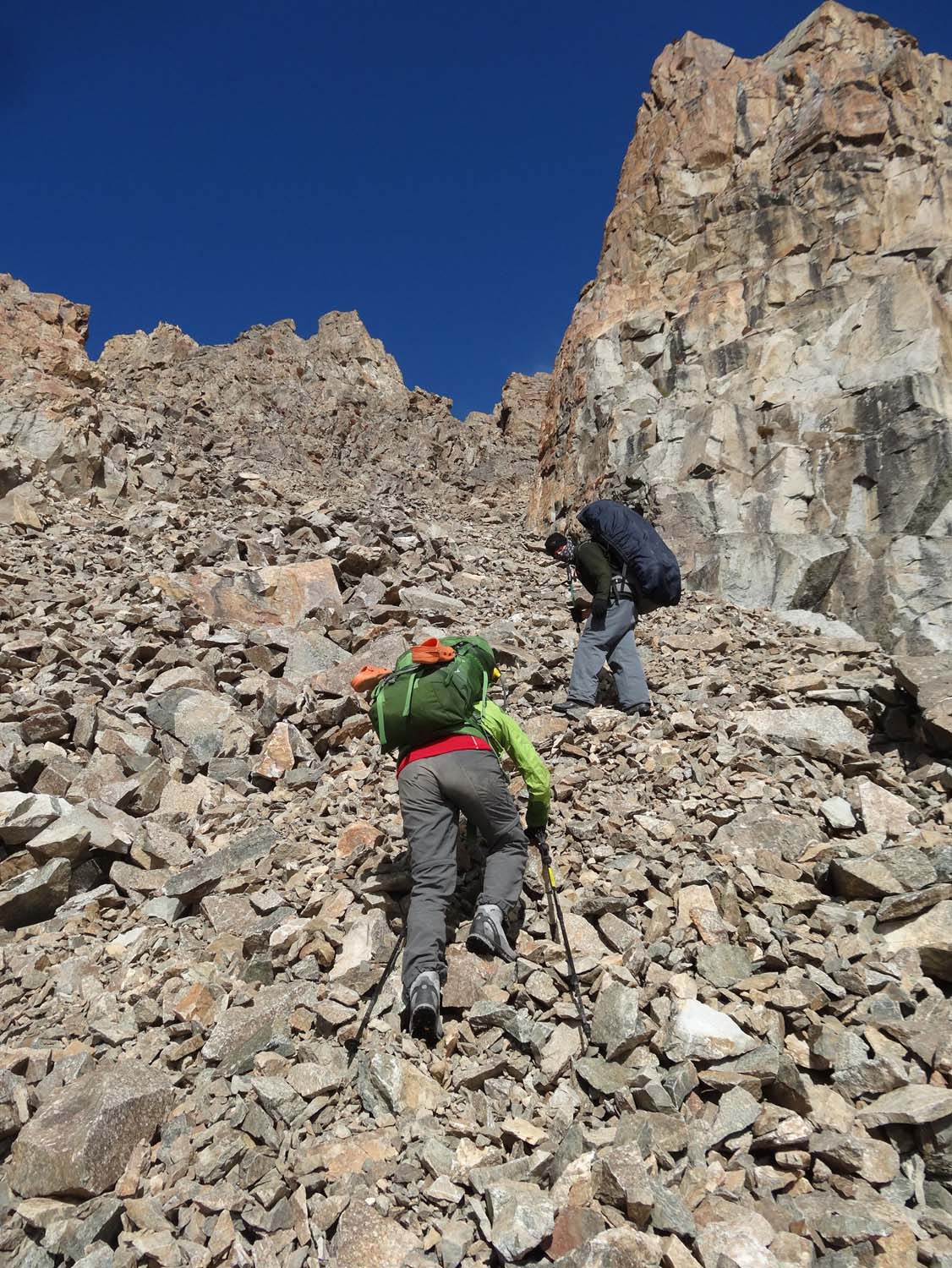 on all 4’s up the scree slope 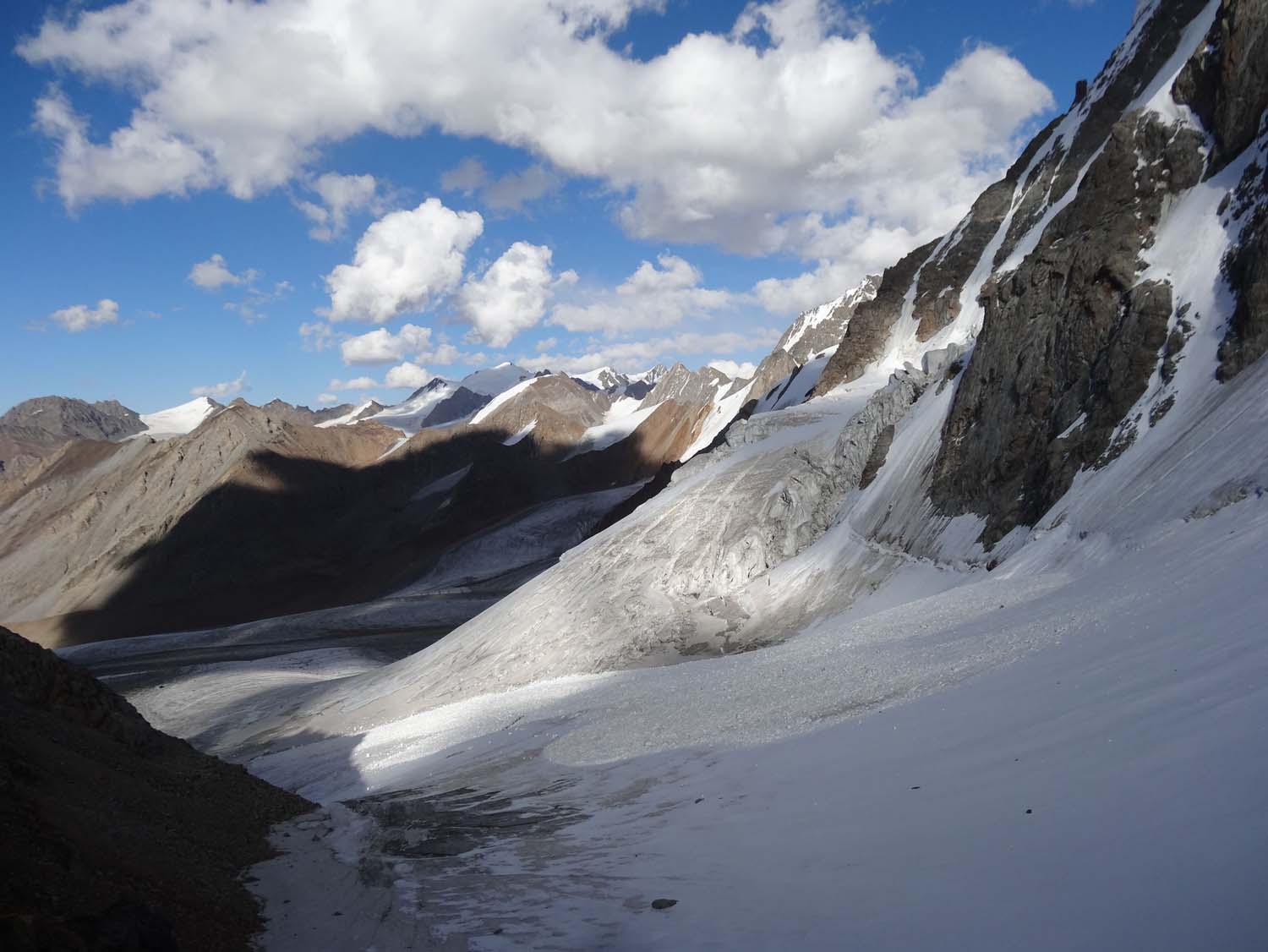 The speed didn’t last long as we soon reached the boulder field of the glacier and hour after hour we rock-hopped our way down. Onno was struggling with his well-used rented boots and eventually put his crampons on again to get down a bit more comfortably. It was a long, difficult hike and leaving late meant we reached camp again early in the evening (6.30pm) instead of late afternoon. We joined Onno and Tamar for cooking and even Dima emerged out of his tent to share some cheese, salami and home-brewed vodka, brewed following his grandfather’s recipe – quite tasty.

Even though we had told him we wanted to leave earlier the next day, there was no sign of life from his tent at breakfast so we decided to head off early and wait down the track in the sun. It was pretty cold in the mornings and gloves and hats were worn until the sun reached the bottom of the steep-sided valleys. Then it was back to shorts and t-shirts. Today we were mainly going downhill and we saw some oversized marmots before they ran for cover. With the buggers spreading the plague we weren’t too unhappy about them disappearing when we approached. 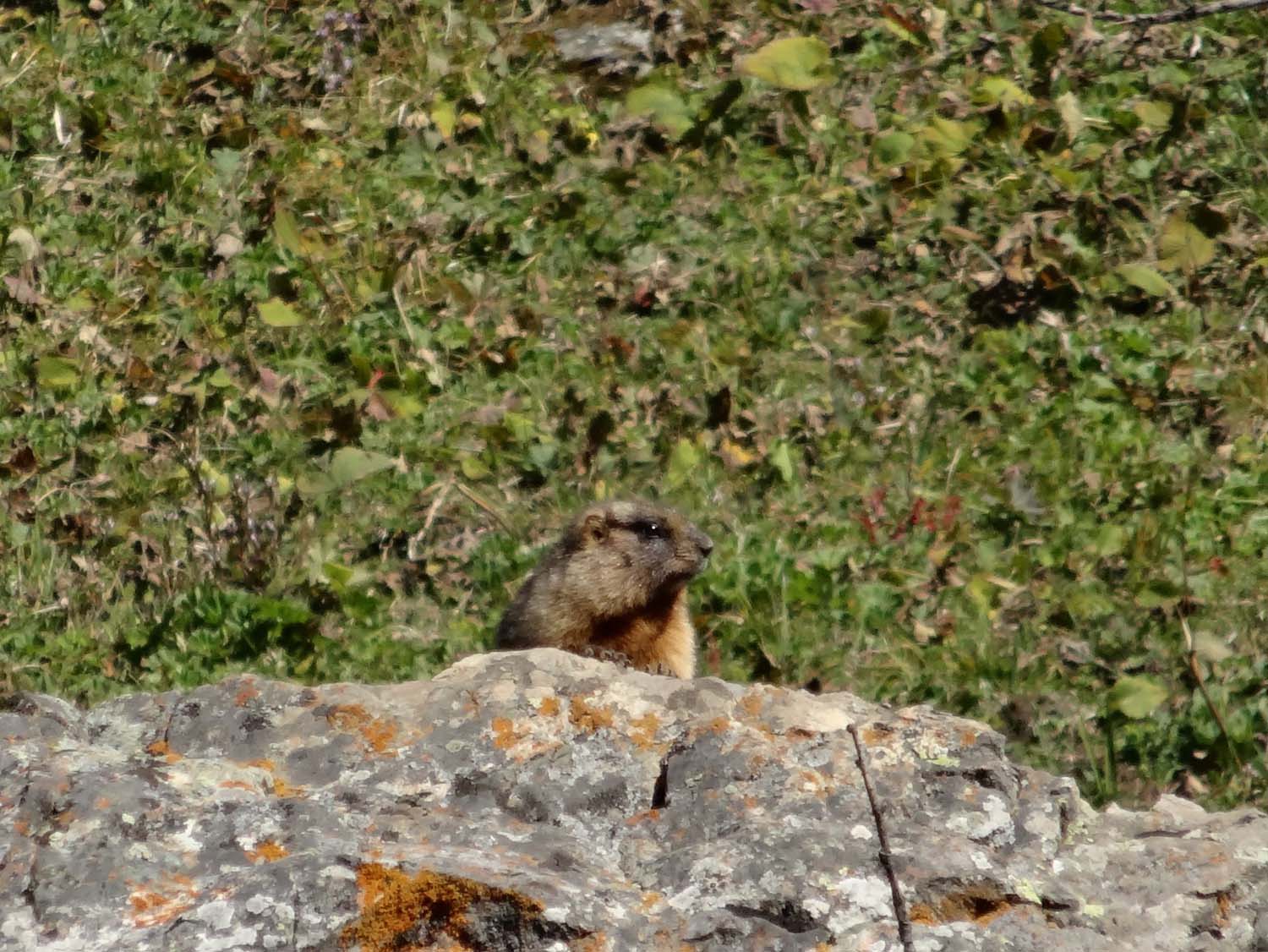 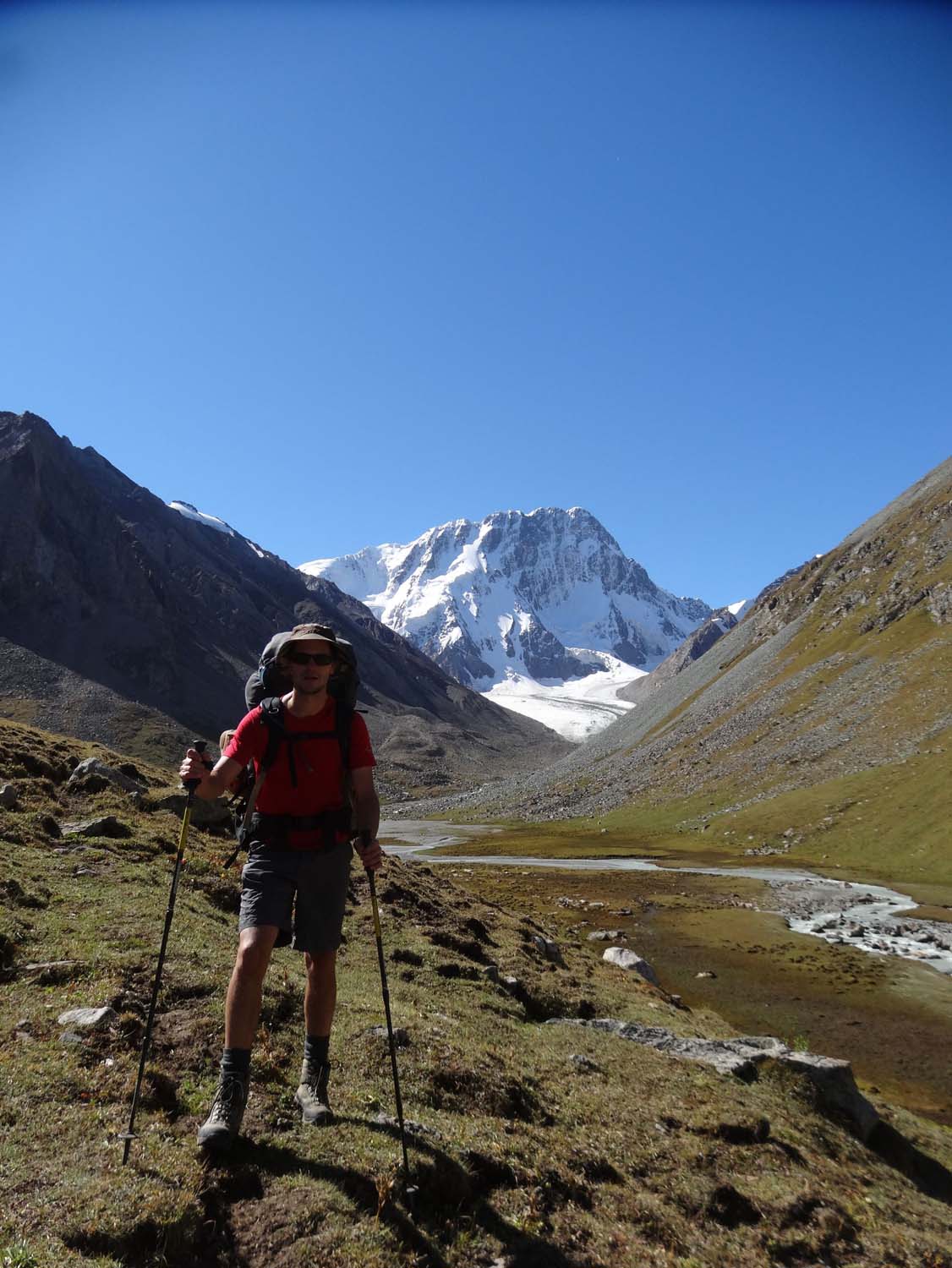 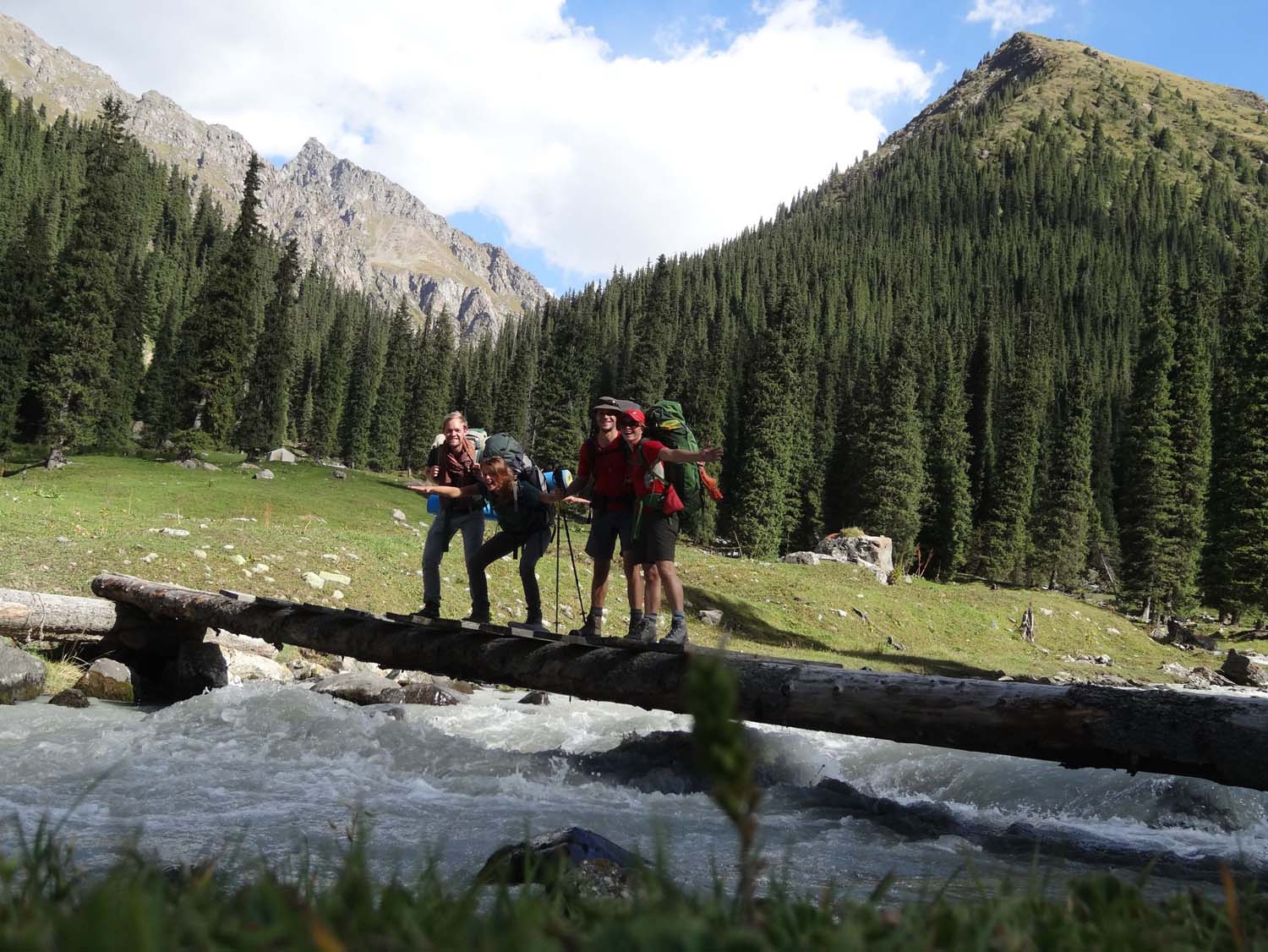 we made it – close to base camp

Walking through pine forests, through massive boulder fields and along glacial rivers, we quickly descended and traded the glacier for high altitude pastures with cows and their nomadic herders. It wasn’t a long day and we enjoyed a lazy lunch spot next to the river. Back at the base camp we pitched our tents and actually enjoyed some sunshine whilst getting cleaned up. We had a little shemozzle with our guide as he failed to tell the ranger we had paid our park entrance fee and where we were allowed to pitch our tents, but soon we were eating a fantastic meal in the big dining tent.

Then it was Russian sauna time! They had a gipsy style wagon in their camp that was set up as a sauna, complete with outdoor plunge bath filled with glacial waters. It was just what we needed. The sauna was heated up by a wood fire underneath a big water drum and got things pretty hot inside. We washed, scrubbed, sweated and plunged until our bodies were clean, relaxed and glowing. And then we poured a beer into them as a reward whilst staring at the stars and satellites flying past. 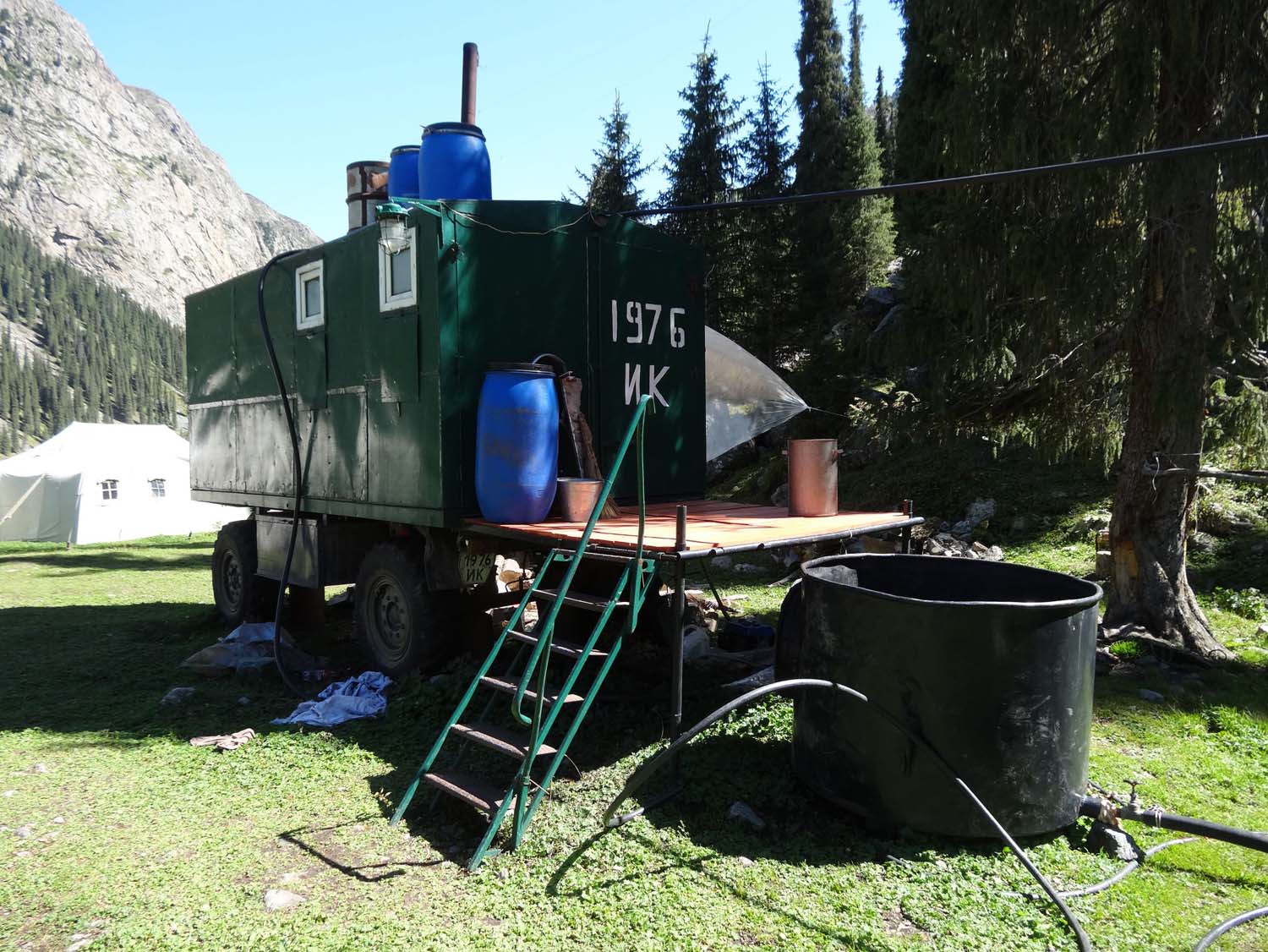 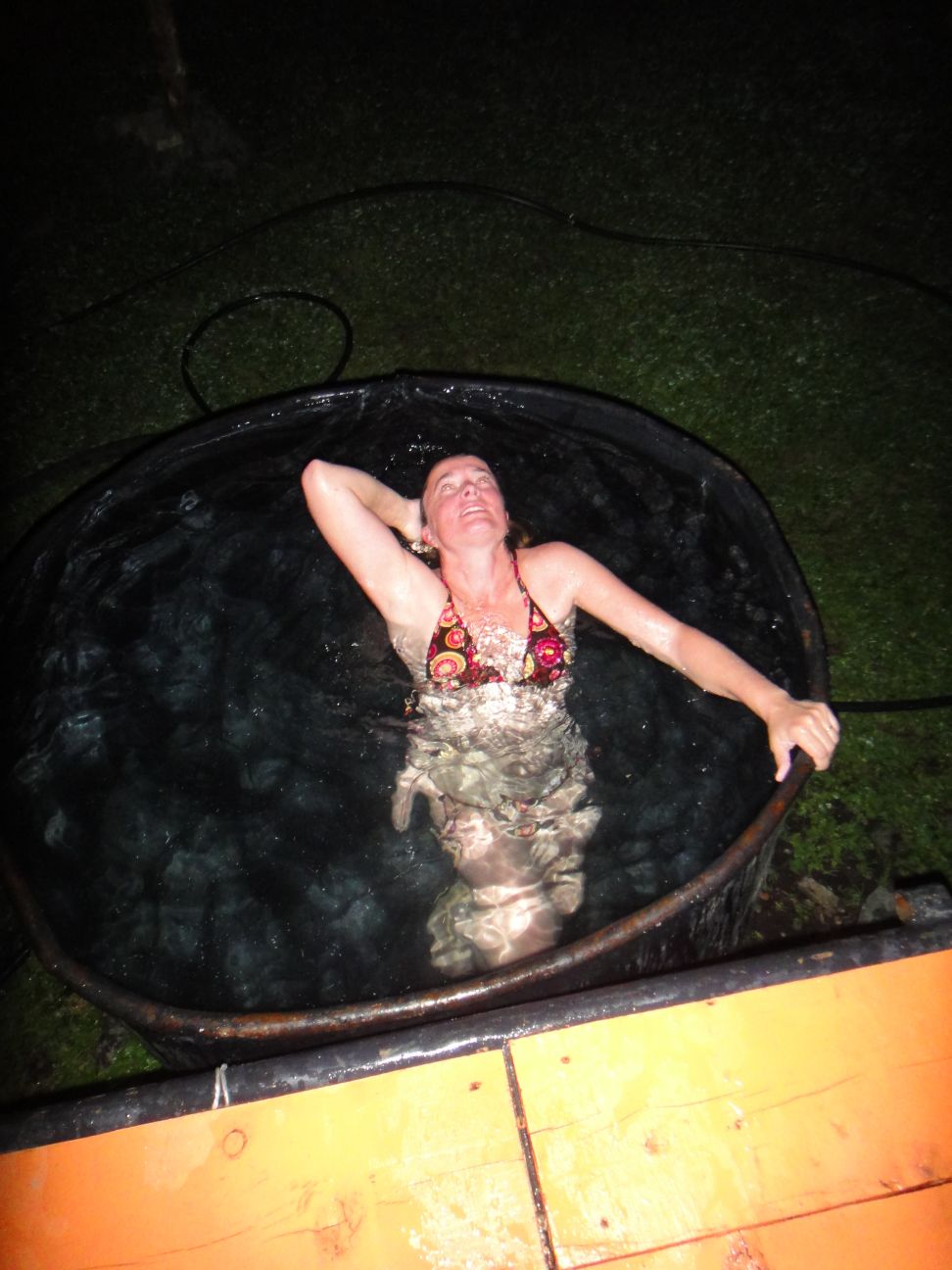 plunging in the glacial waters after the sauna – cold but good

The next day we were on our own (the four of us that is) and we crossed a river to get to a bridge to cross an even bigger river. That was all of the level ground we would be walking on that day. Our hike went up, up and up a bit more. But it didn’t feel like hard work as the trees, marmots, rocks, woodpeckers, mountain streams and flowers all took our minds of the long ascent we were on. 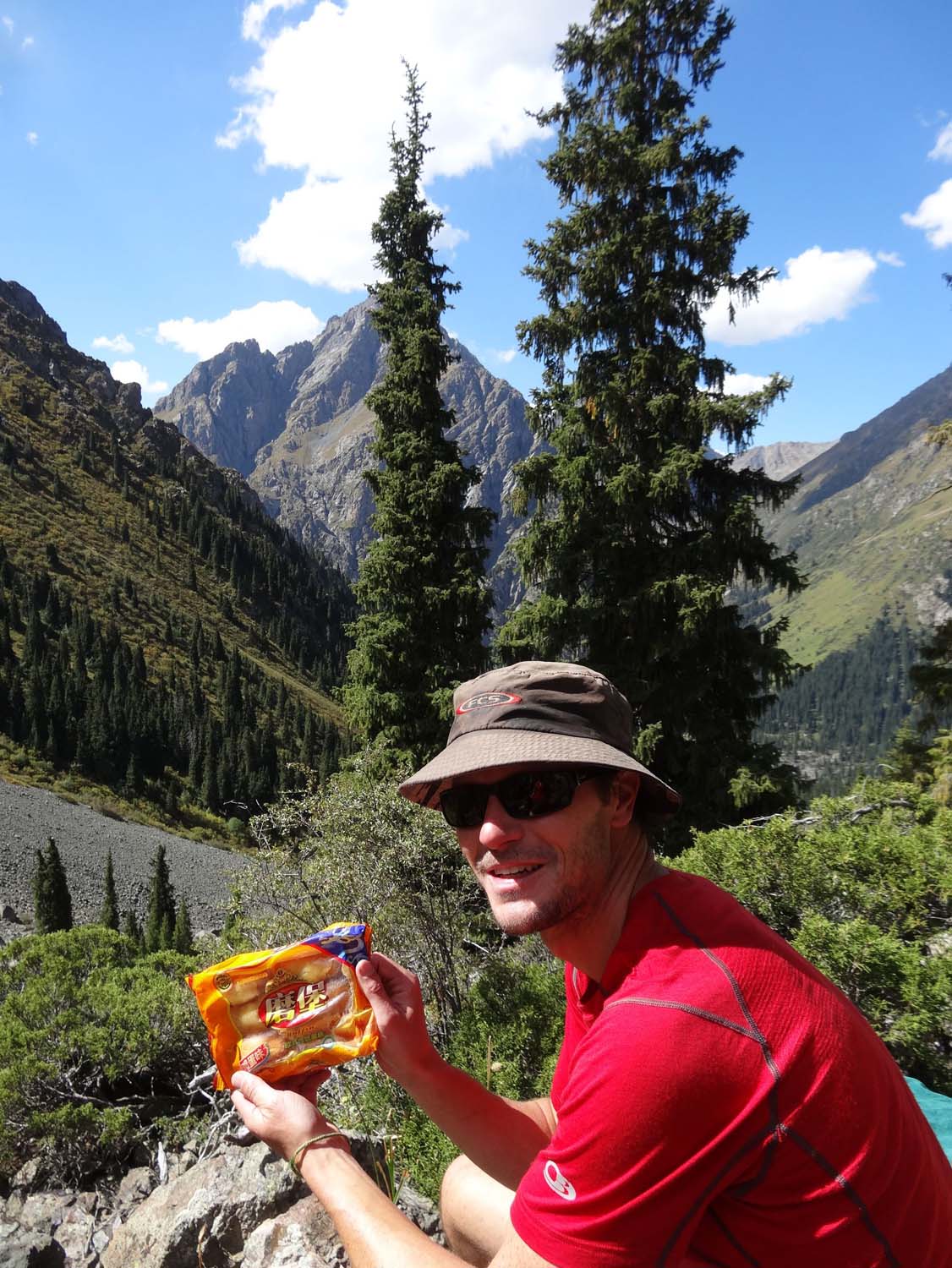 eating magdalenas bought in China on our morning tea break 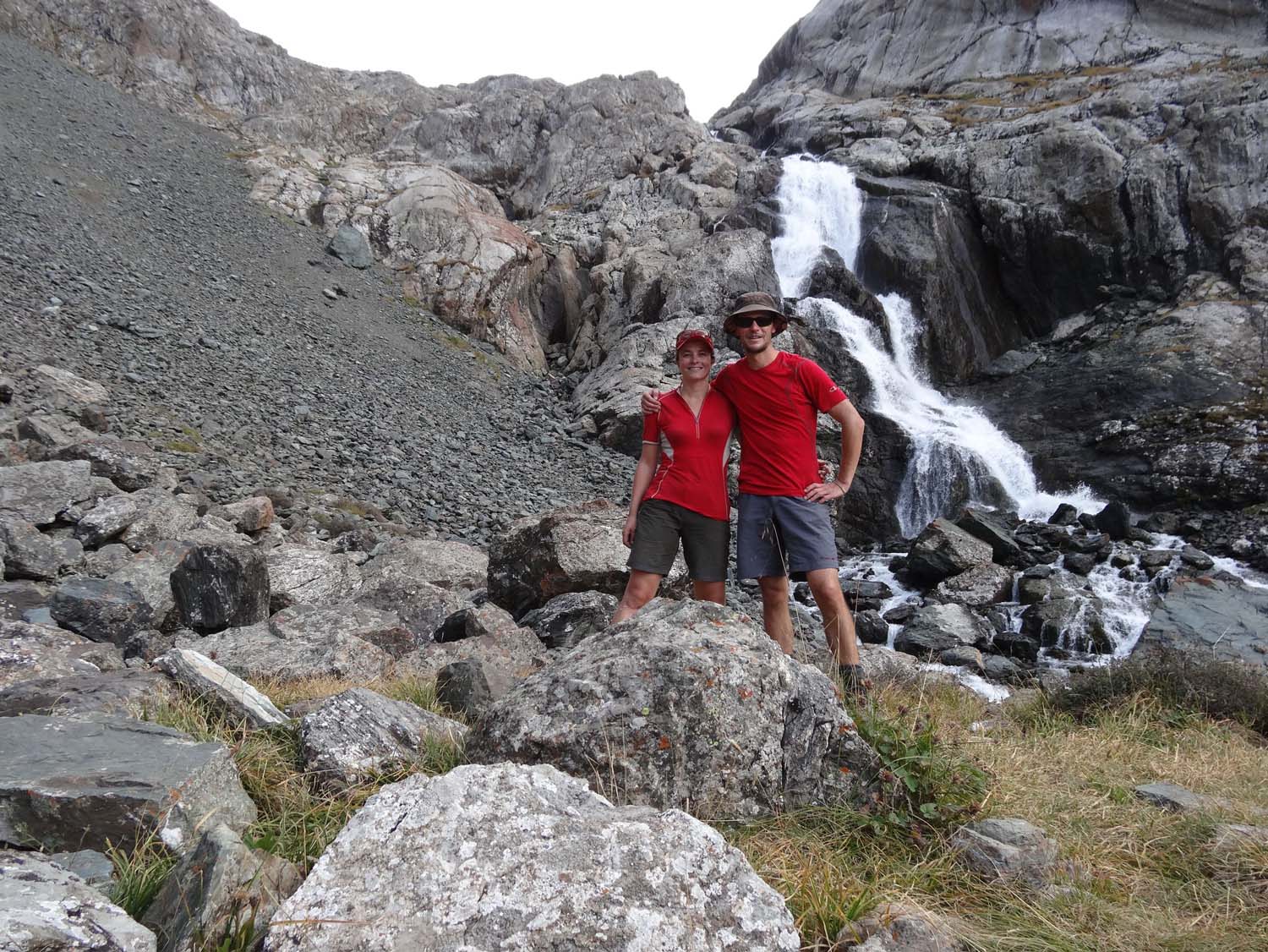 this waterfall comes directly from the beautiful lake, we just have to get up that scree slope behind us to get there

The last section was pretty much a scree slope and we had to follow a tiny goat track zigzagging up the hill. But when we finally reached the top we were rewarded with an awesome view over the beautiful turquoise glacial lake Ala Kol, our campsite for tonight. Later we were joined by 2 Czech hikers, Andrea and Viktor and we enjoyed cooking together and playing bingo, a game they had never heard of. 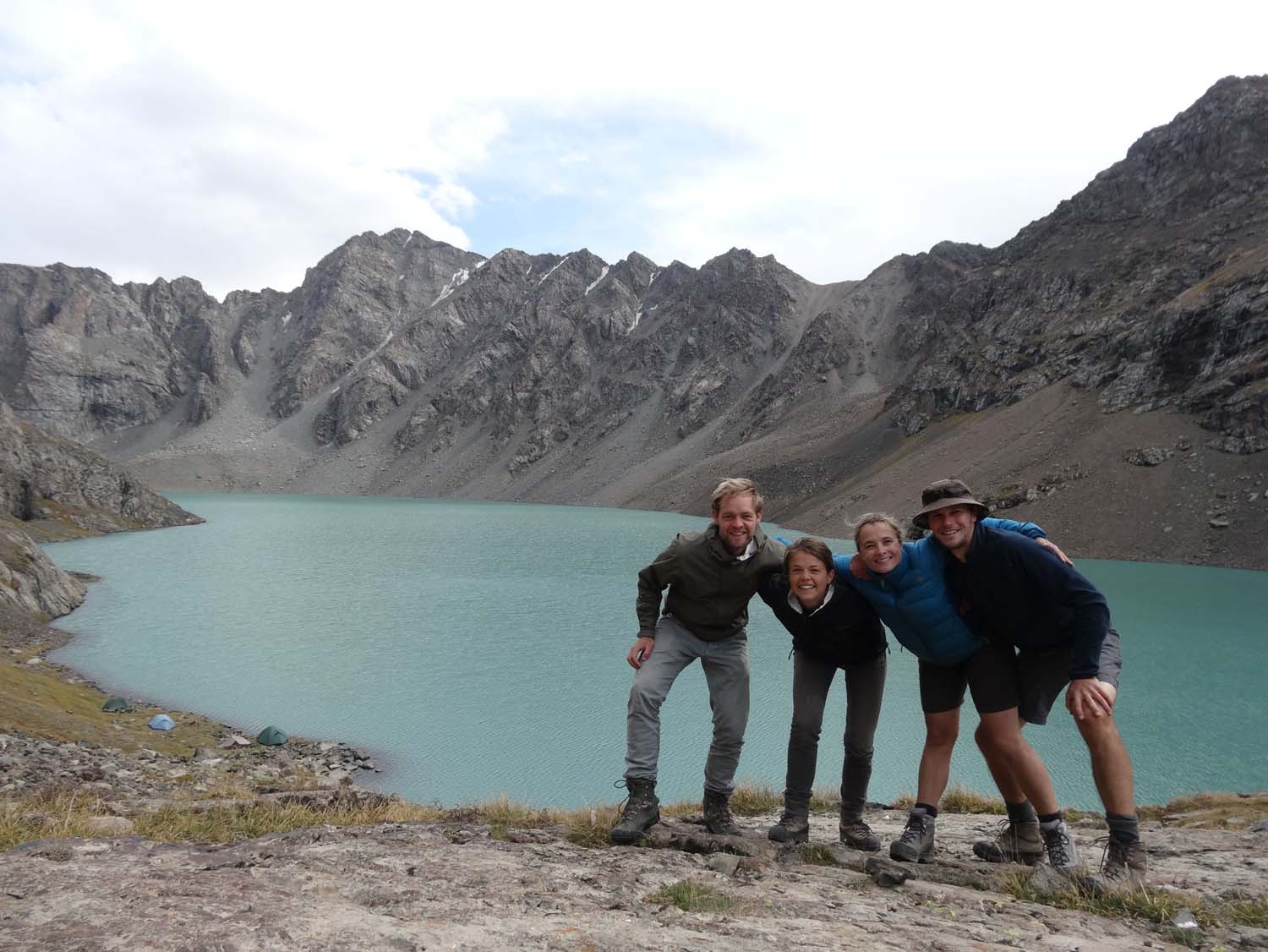 yay, we made it to our campsite by the lake 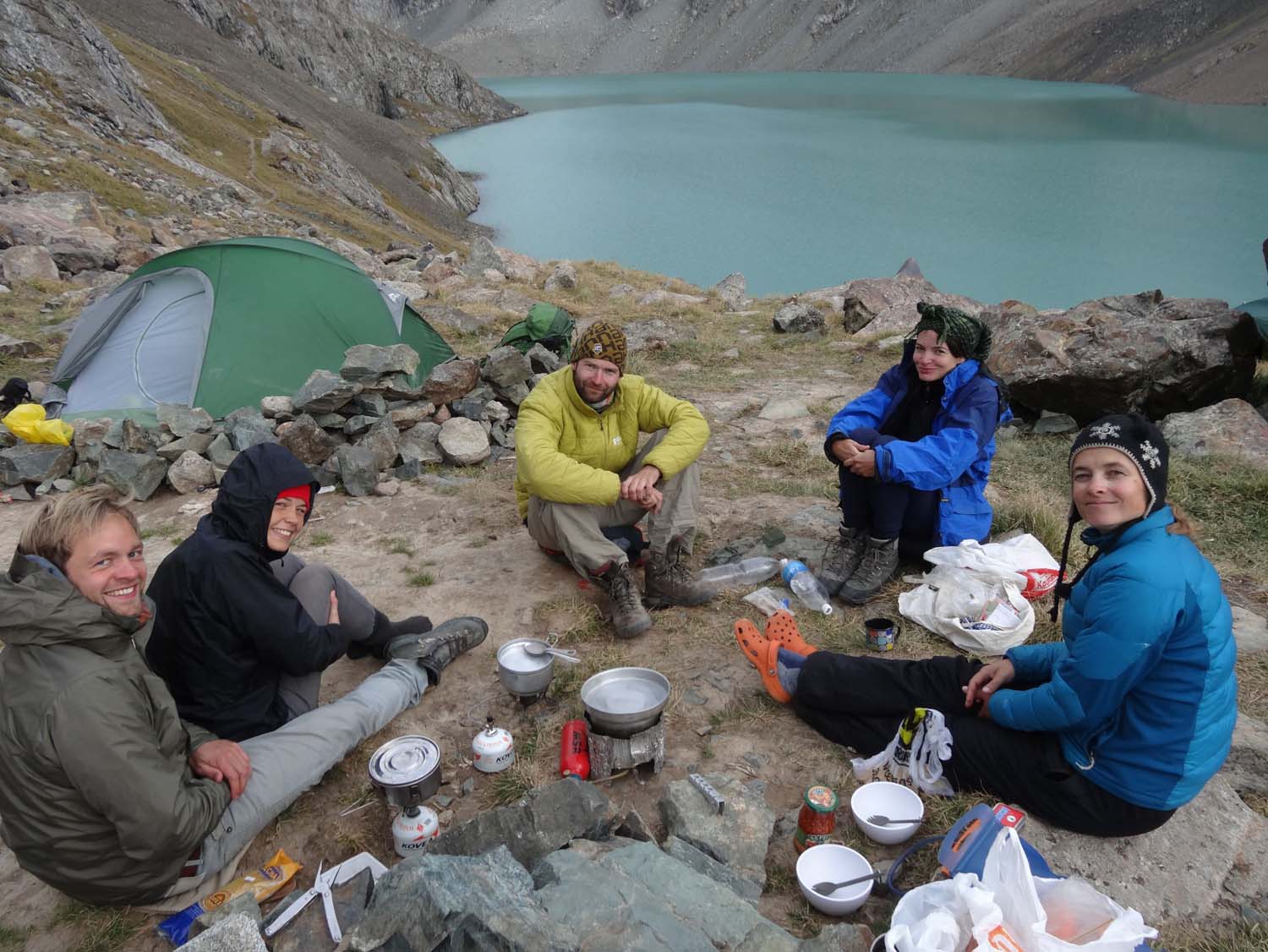 having dinner and playing bingo together

In the morning 3 ibex made a joke of our hard work to get to the next pass by bouncing over the scree slopes like they were flying. It had taken us a couple of hours to get to the top, they covered half the distance in about a minute! At the top we watched the snowflakes come down – the first snow of the trip! – and we munched some chocolate biscuits as our reward for reaching the Ala Kol pass (3860m). From here it was all downhill to the hot springs. 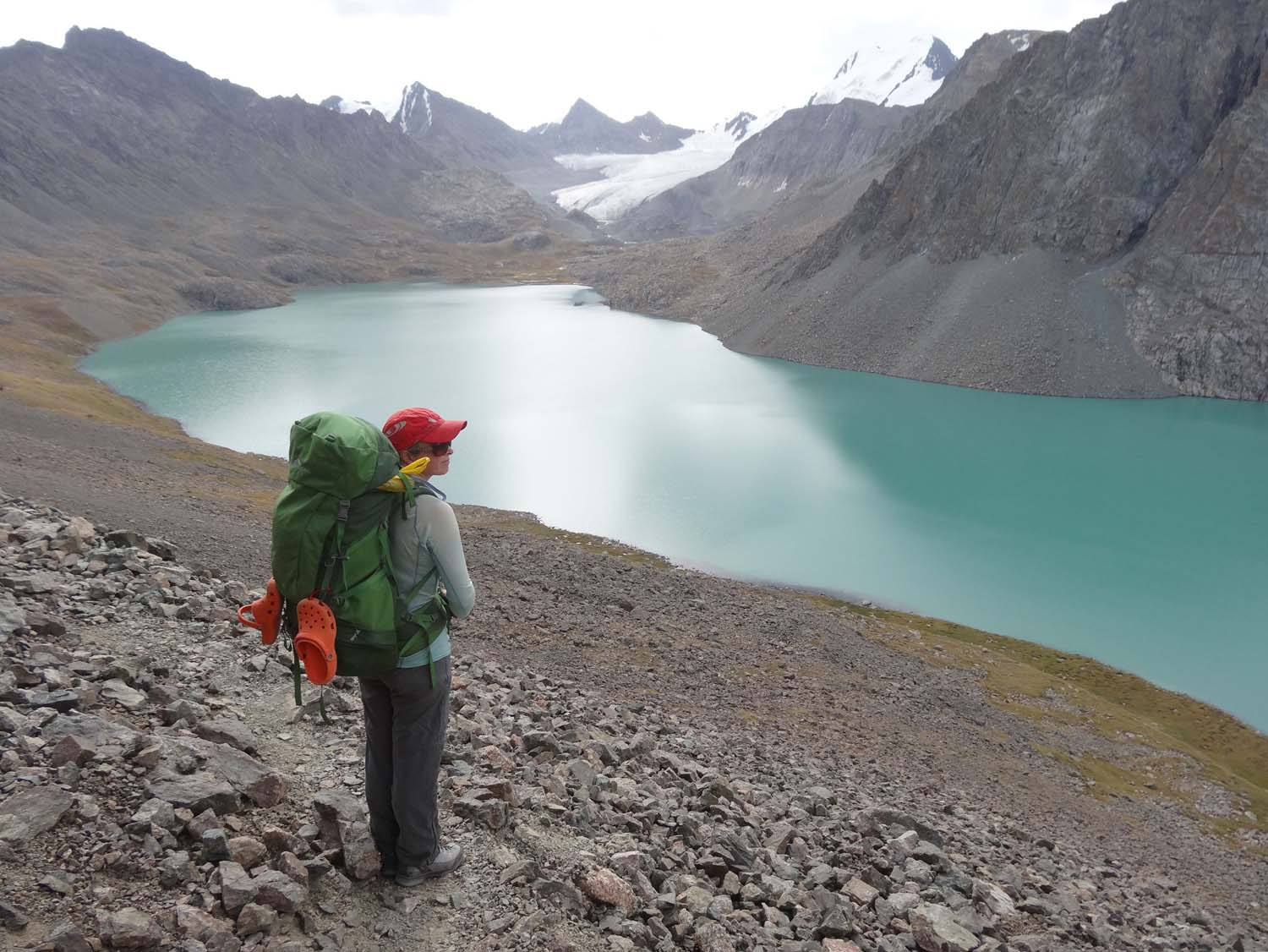 can’t get enough of this view 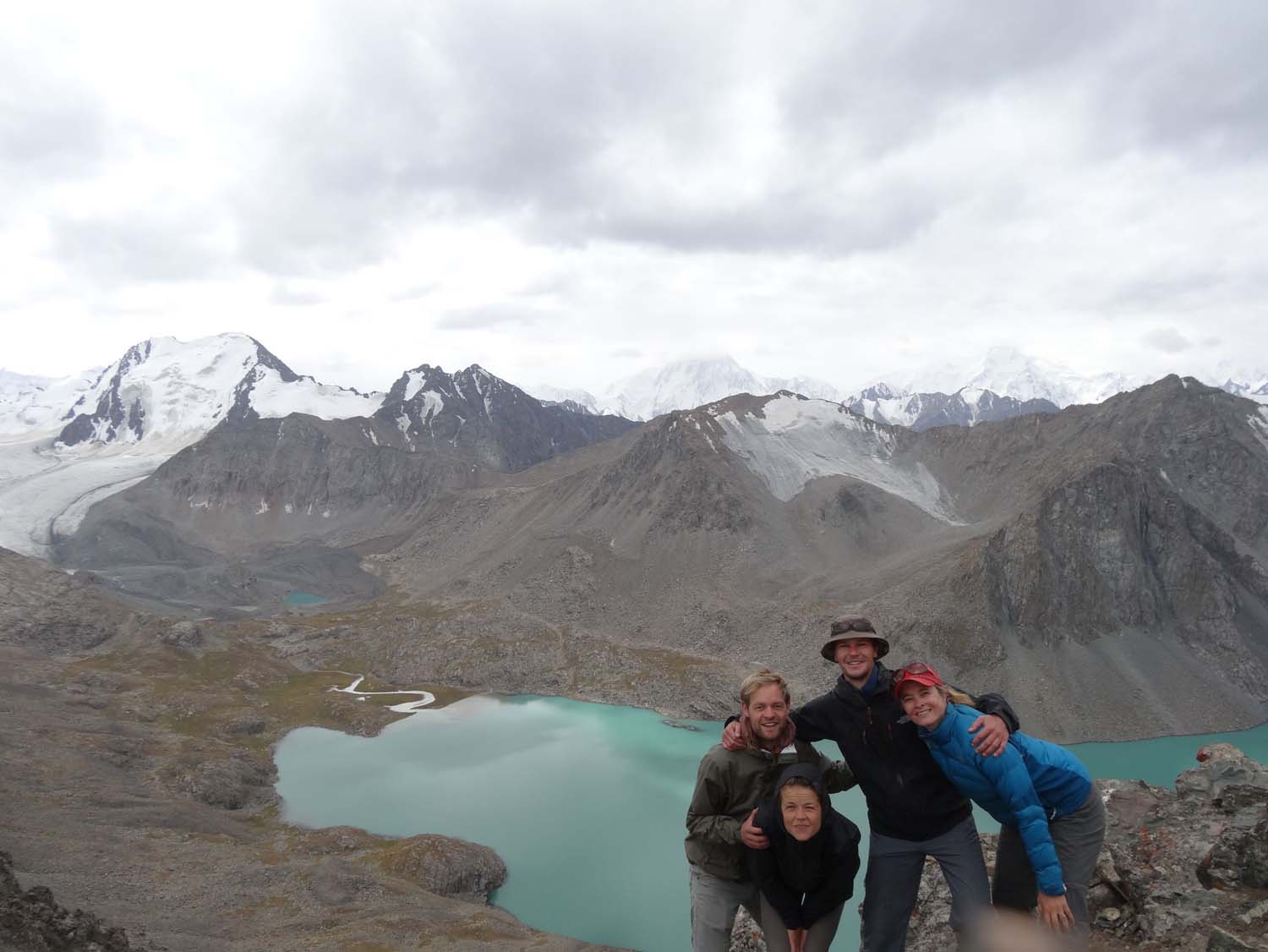 Onno, Tamar, Jon and Jude at the top of the pass, just before it started snowing

After the first downhill section, which we covered cm by cm (scary!), it became a lot easier and around 4pm we reached the eagerly anticipated hot springs. And they were definitely hot. A treat for our tired muscles, followed by another treat, this time for our stomachs: plov, salad and bread washed down with some beers. 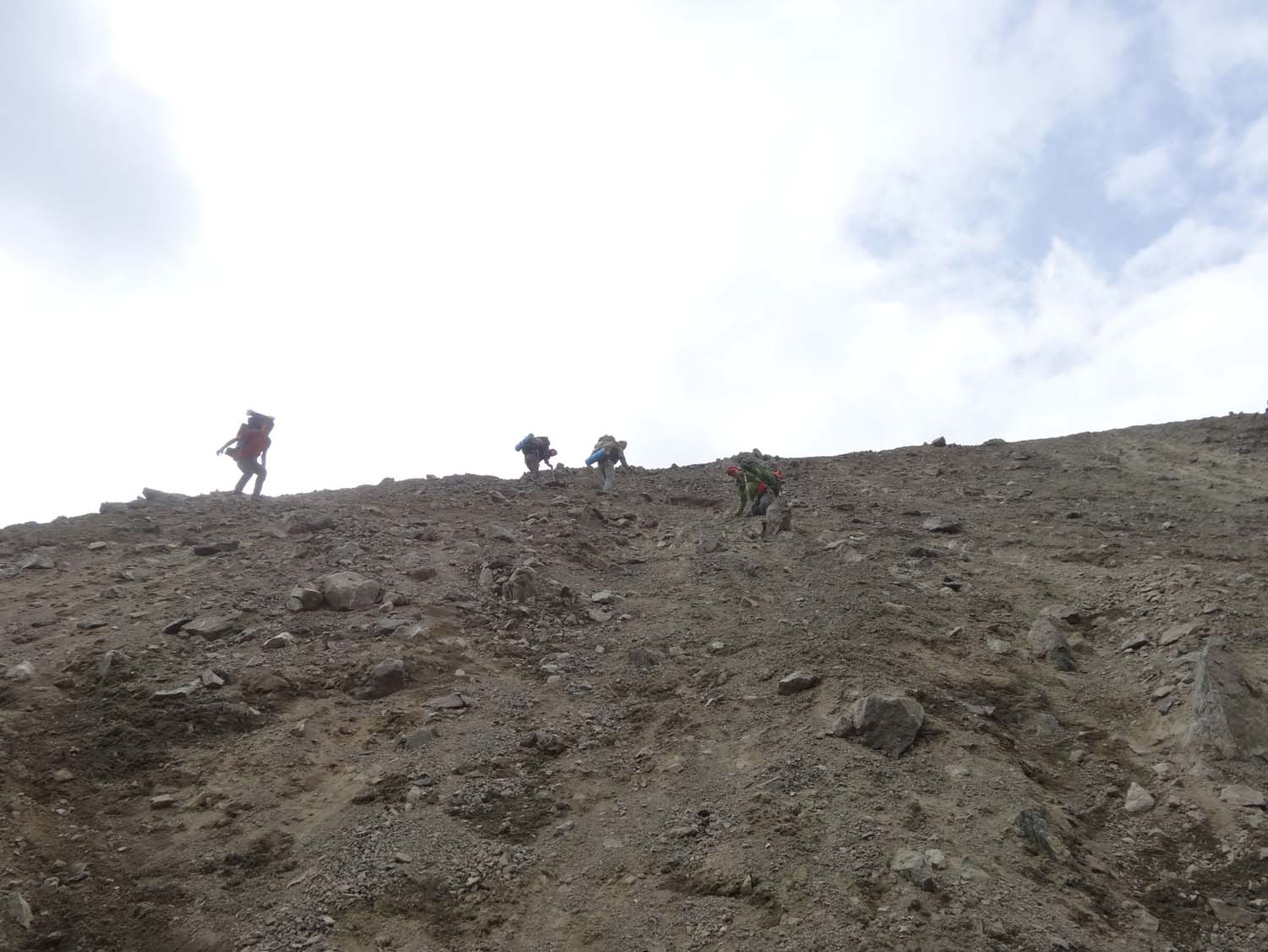 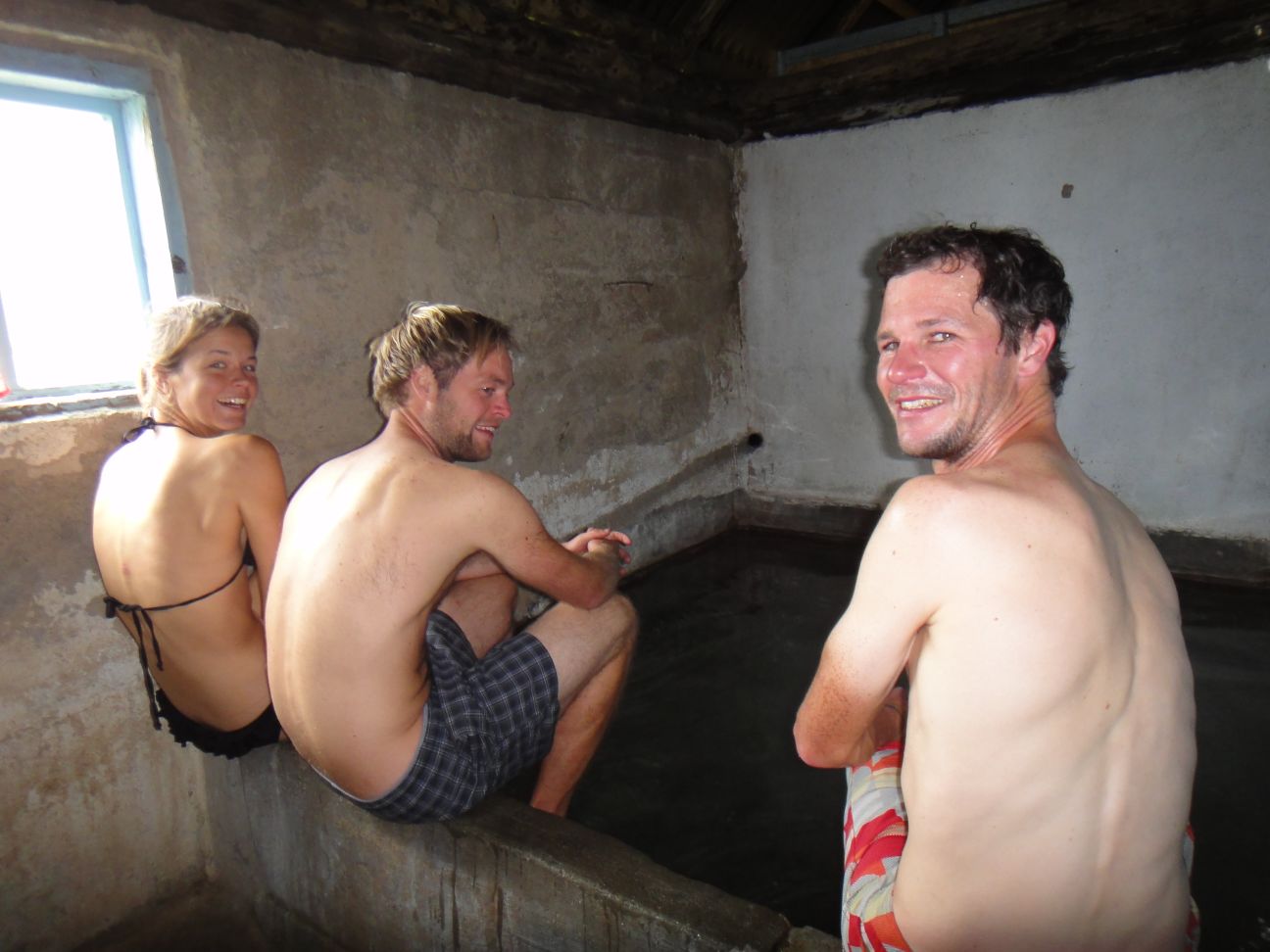 hot springs after a hike should be mandatory 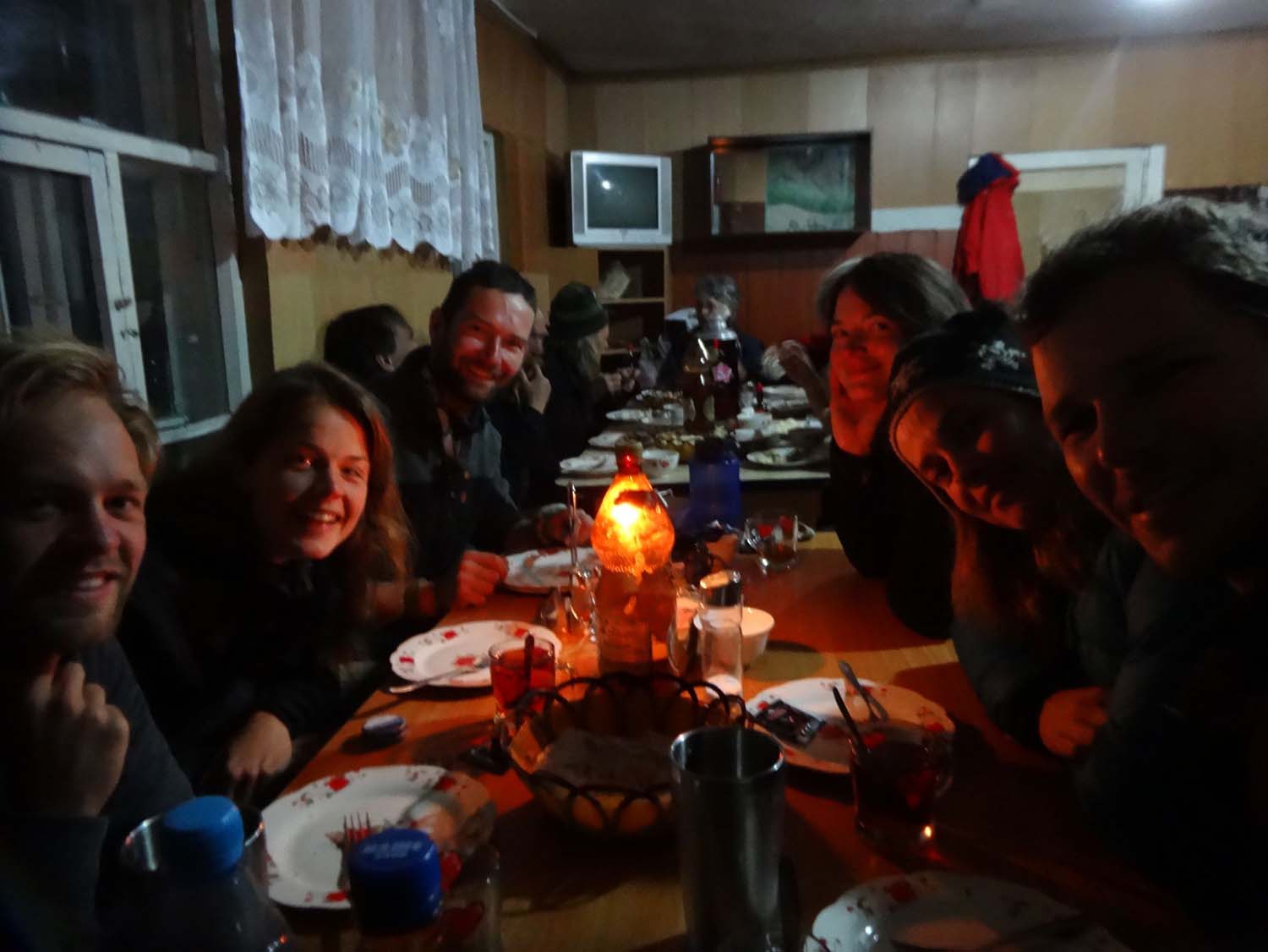 followed by a great dinner by candlelight

The next day we bounced up and down again in an old Russian jeep, this time we made it without any mechanical issues, but the ride still took more than 3 hours on a very rough, rocky track. All too soon we were back in the hostel where we were greeted with a pile of clean clothes, great. Time to pack up the car, say goodbye to our new friends Onno and Tamar and head towards Issy Kul for our next adventure.