In Iran we enjoyed filling up. Instead of heavily taxing petrol and diesel, the government here subsidises it. Every car gets an allowance of 60L per month at a subsidised rate, and to get this price they use a fuel card. Once they have used up their 60L, they can continue to buy petrol, but at the normal price. The same applies for trucks. They get a quota subsidised per month so they can buy diesel at 4ct a liter (!). After they reach their quota for that month, they have to pay full price: 13ct a liter.

We were advised to use a truck driver’s fuel card to get the cheaper diesel, but we never did. It didn’t feel fair that we would use a chunk of their cheaper fuel and they would then have to pay the full price. After all, to fill our 120L tank we pay (at full price) about $13. Not exactly economic hardship for us. 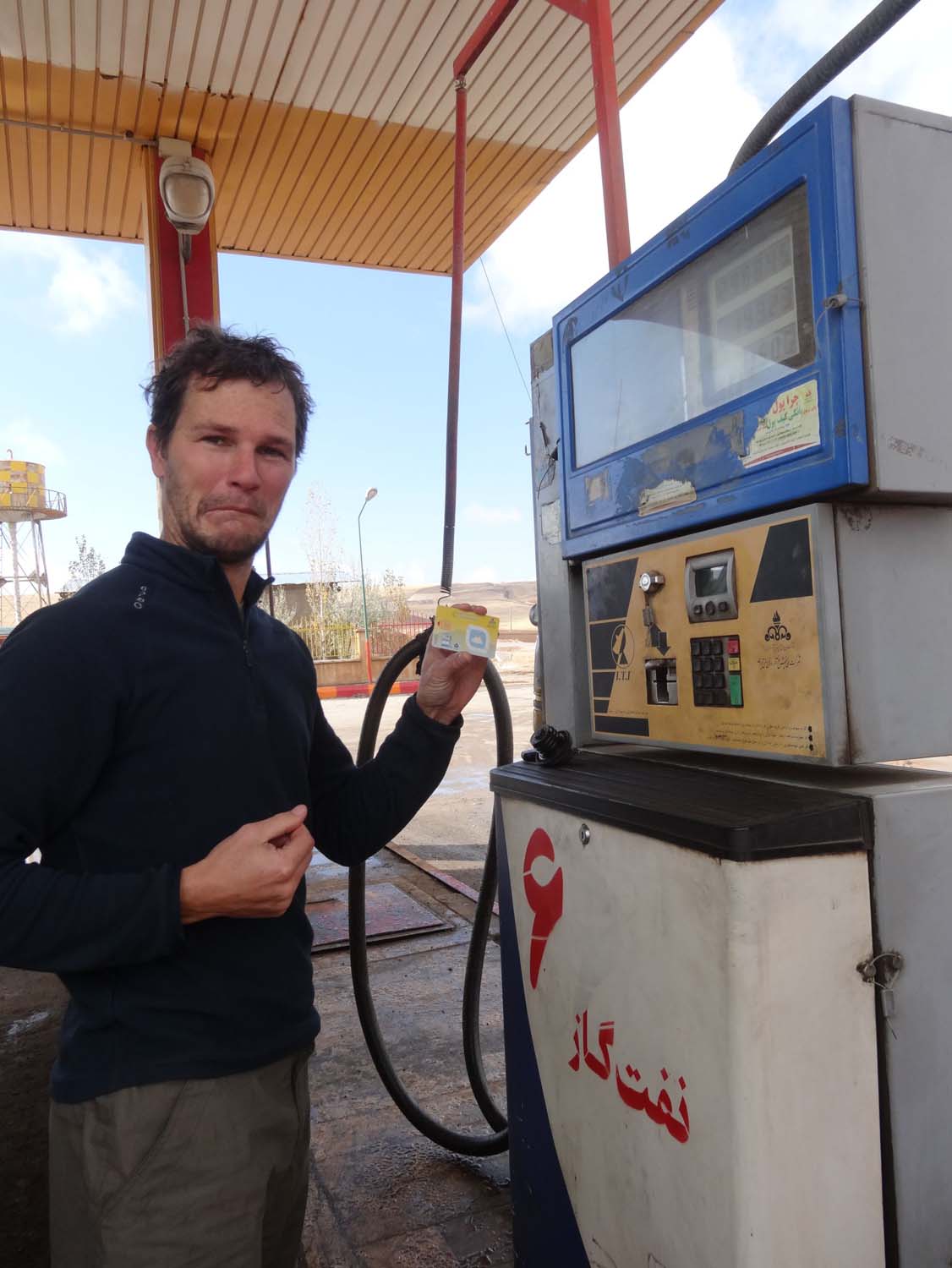 how does this fuel card work?

When looking for fuel we always had to search for buses or trucks that were filling up as many petrol stations didn’t have diesel. All cars in Iran run on petrol, only trucks use diesel. And when we did find diesel they would generally first try to wave us away, as they assumed, being a car, we were in the wrong spot. And then, as we were filling up, we would always have to be weary when she was nearly full. The high-flow nozzles common for trucks often resulted in the last liter or so squirting out, covering whoever filled up with the lovely perfume of diesel on clothes and shoes.

When leaving Iran we decided to fill up some jerrycans with diesel to make venturing into Turkey a little less painful on the wallet. Fuel is definitely not subsidised in Turkey, one liter of diesel going for $2.20! Ouch. The Iranians were reluctant to fill up jerrycans, but in the end we had an extra 80L hidden in the big aluminium box on the roof. But we needed have worried. Turkish customs saw the jerrycans, asked what was in them and didn’t blink when we said diesel… That was a quick saving of $150 for us. Score! 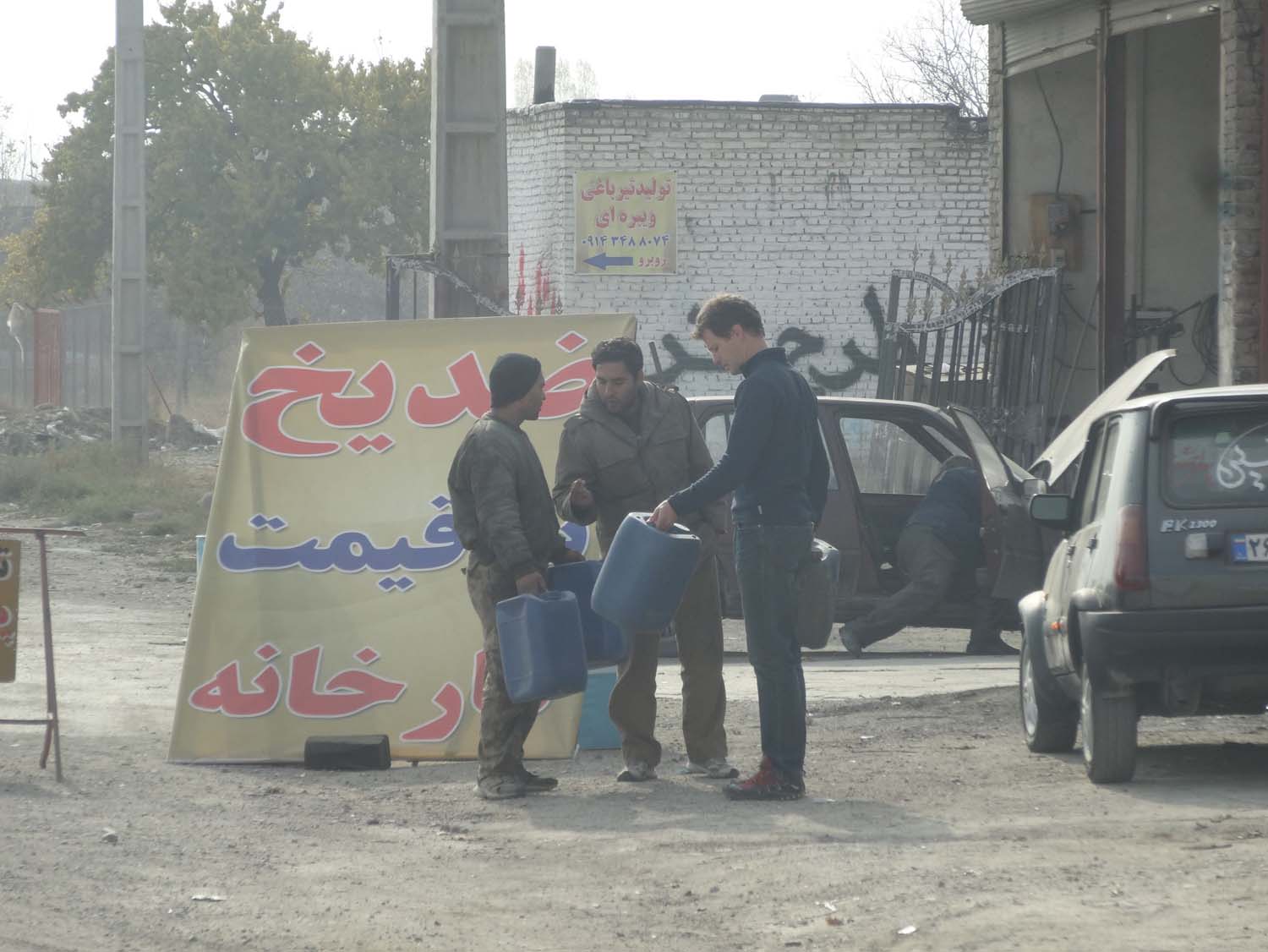 buying 4 jerrycans so we can take extra diesel to Turkey

Most daily necessities are cheap in Iran too, but due to the sanctions, imported products are expensive. We were expecting it to be hard or impossible to find things like Coca-Cola, Apple products and other American brands, but no. Everything is for sale in Iran, Coca-Cola is even made under licence in Iran. And all major brands we can get, they can buy too. You want an iPhone, no problem. Prefer an Android Samsung Galaxy, no problem. A Sony camera or any other brand, no problem. You pay the standard price for these items, which is a lot for Iranians, but you can get anything you want.

The only real limitation we noticed was that the Visa / MasterCard networks don’t operate here. The Iranians have banks and ATMs where they can get money, but unless you have an Iranian bank account you can’t use their ATMs. Even when you try to pay something with an Australian credit card on an Australian website when physically located in Iran it doesn’t work. Paypal even blocks your account when you try.

For us this meant we needed to bring cash into the country, US$ preferred, to exchange. As it was the same in Uzbekistan and Turkmenistan, there were quite a few dollars stashed away in various hidey-holes in Lara. I hope we remember where we put it all…. And don’t change money at the official rate in a bank, find a money changer or a jeweler as they give you much better rates.

Another American thing that hasn’t made it into Iran, or into a lot of Central Asian countries, are the fast-food chains. There are no McDonalds, Burger Kings or KFCs. Bliss! Instead, local, delicious foods are still being sold everywhere, fantastic.

We had another good meal at Tak Taku guesthouse in the Dasht-e Kavir desert. We spent one cozy night there in the company of 2 Spanish guys and a Slovenian cyclist, two of them being vegetarian too, before getting the bikes off the back of the car for our one and only bike ride in Iran (try riding with a headscarf). It’s a short ride, but Mohammad takes us through his village where houses are built like little fortresses with individual courtyards, and explains some interesting local customs. For example the two knockers on each door, one long and thin one, and another round and fat. One is used to announce male (or mixed) visitors, the other for females. When a female knocks on a door, the sound is recognised and a female of the household will open. You can probably guess which one is used for whom… 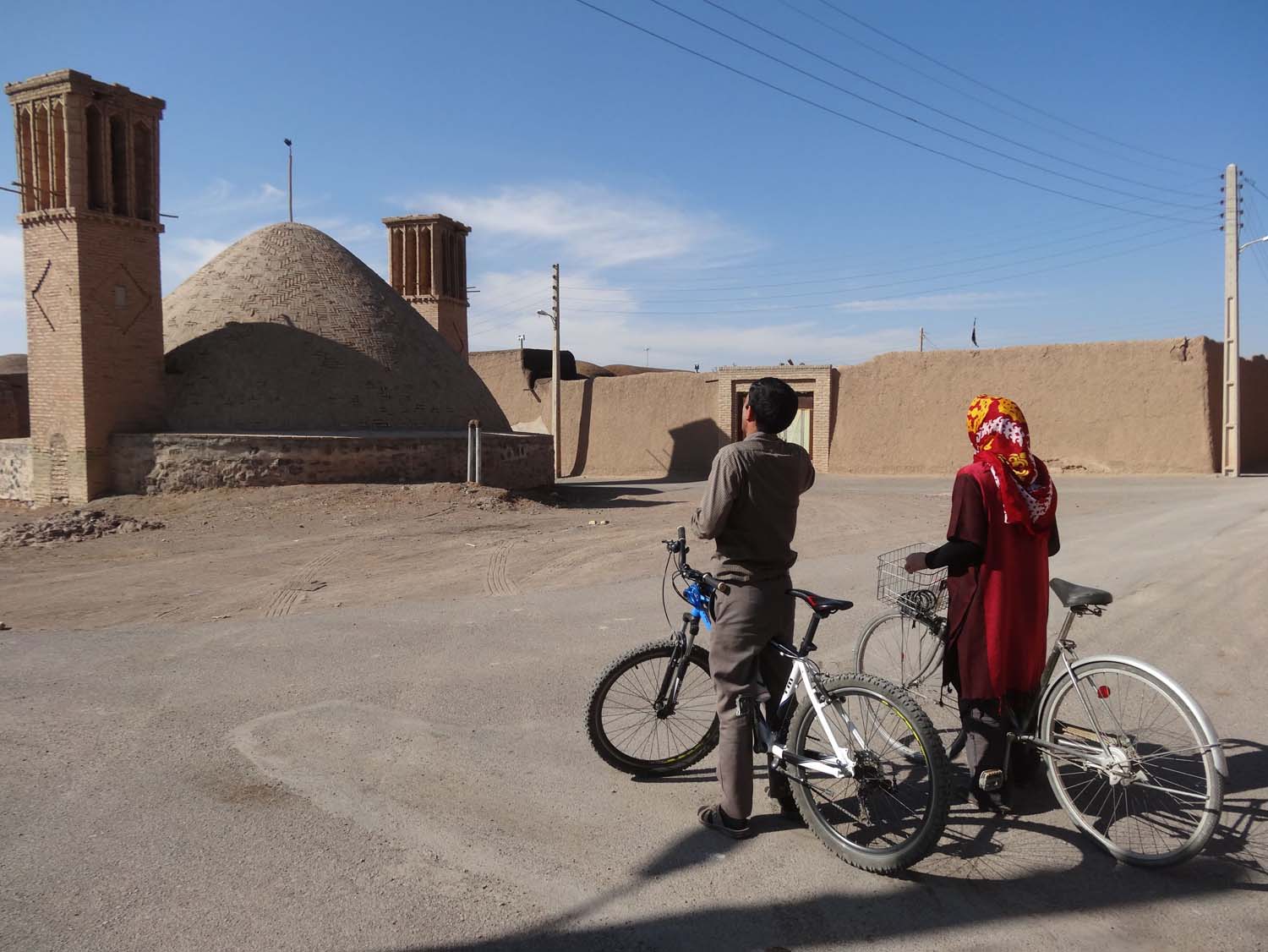 short but interesting bike ride with Mohammad around his village 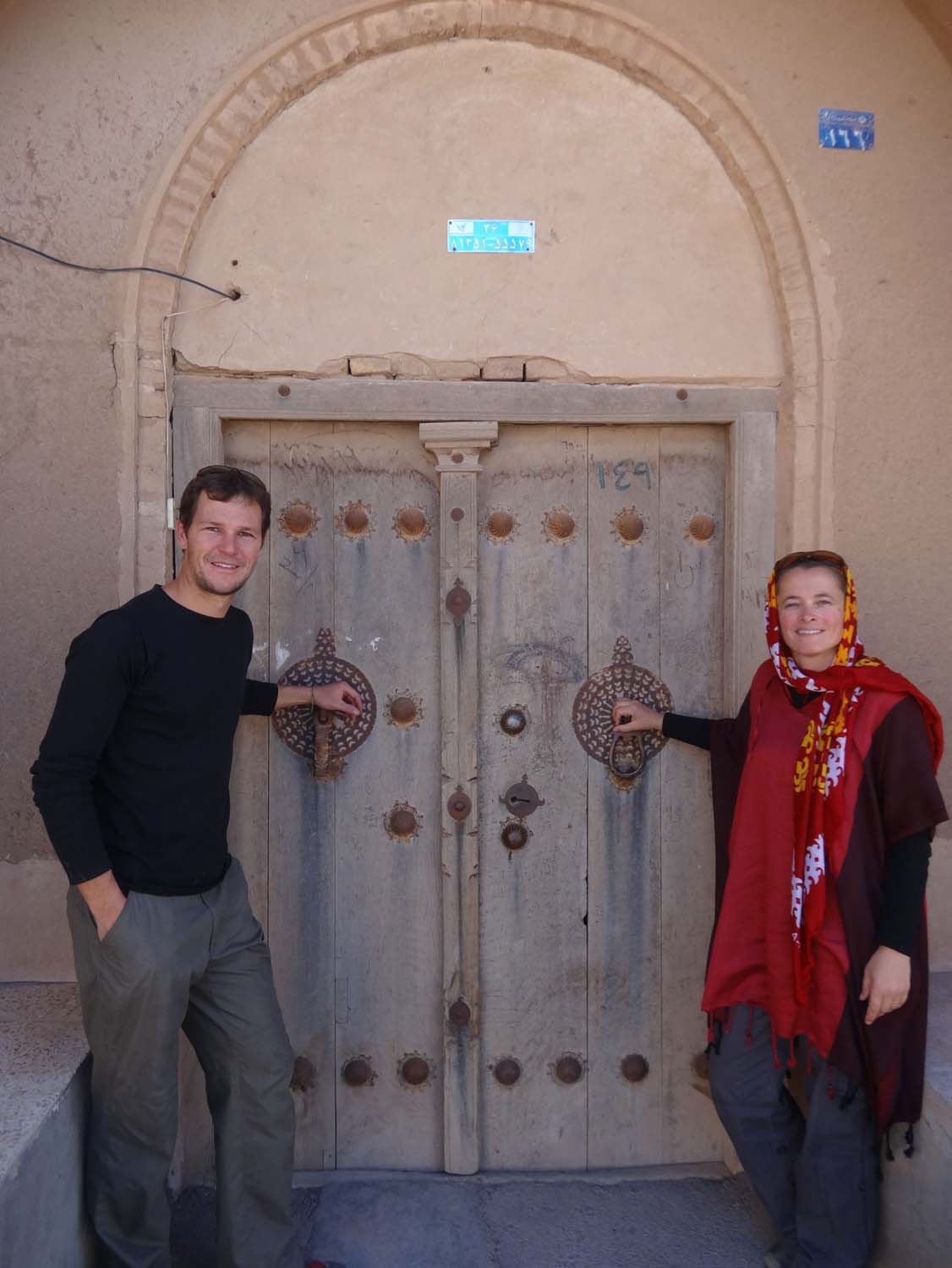 male and female knockers on the doors

Mohammad also draws us a map of the sand dunes we should visit as well as a huge salt lake in the area. An amazing contrast to the beautiful waterfall we visited and the (still snowless) ski slopes in the Zagros Mountains, or the Caspian Sea in the north where fishermen are desperately trying to survive on what little is left of the fish in this vast lake. 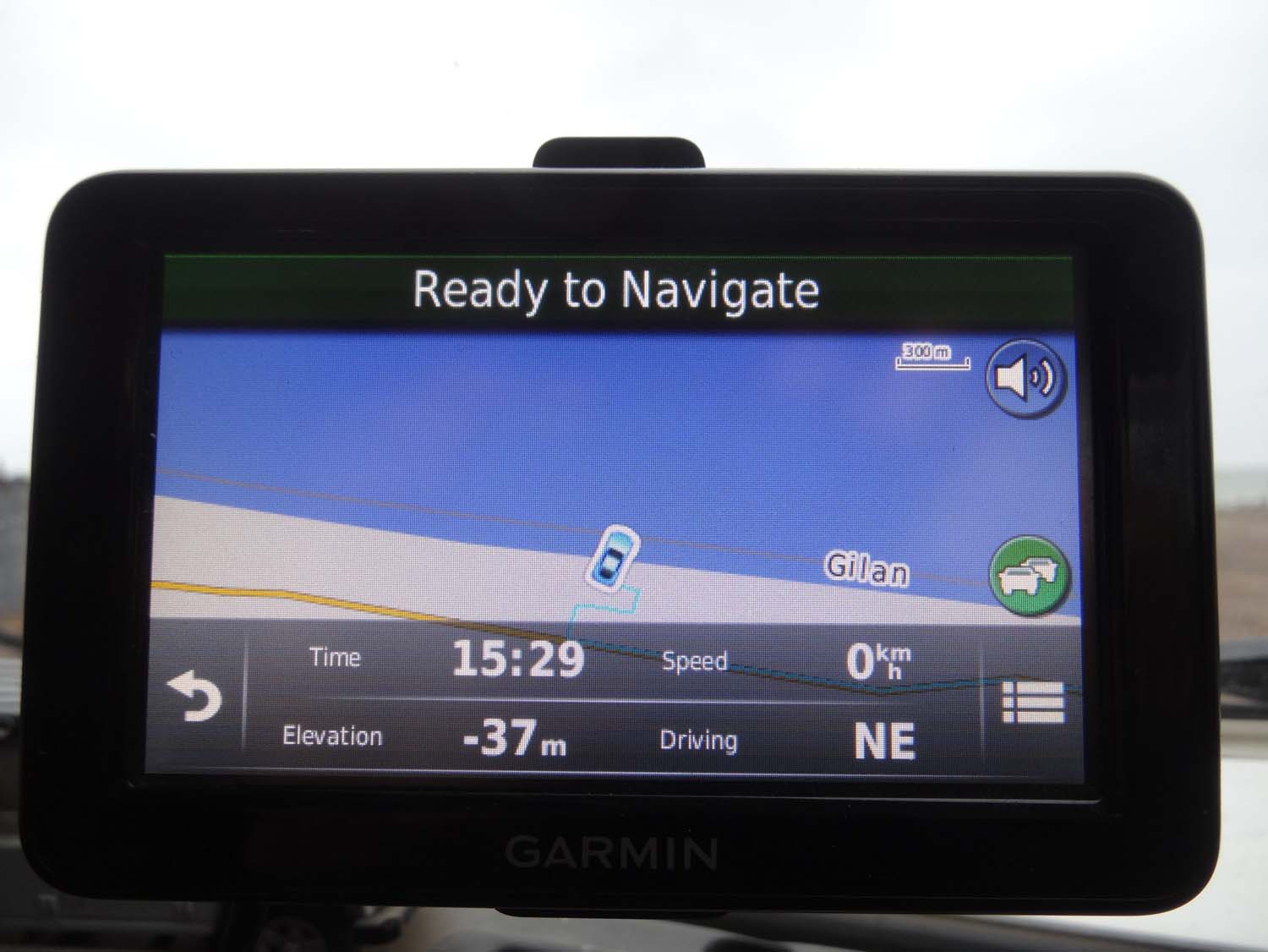 the Caspian Sea brings us to a new low 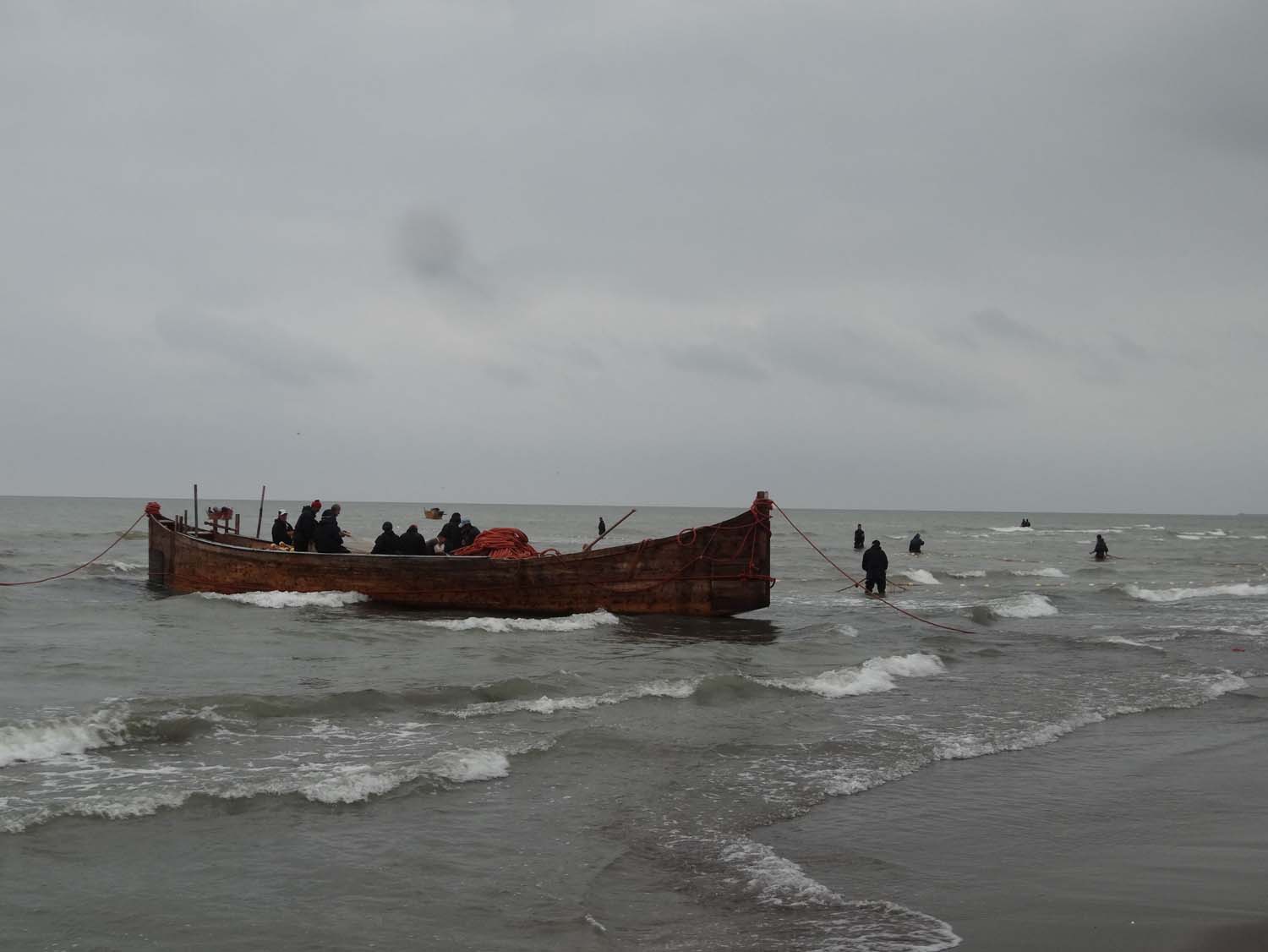 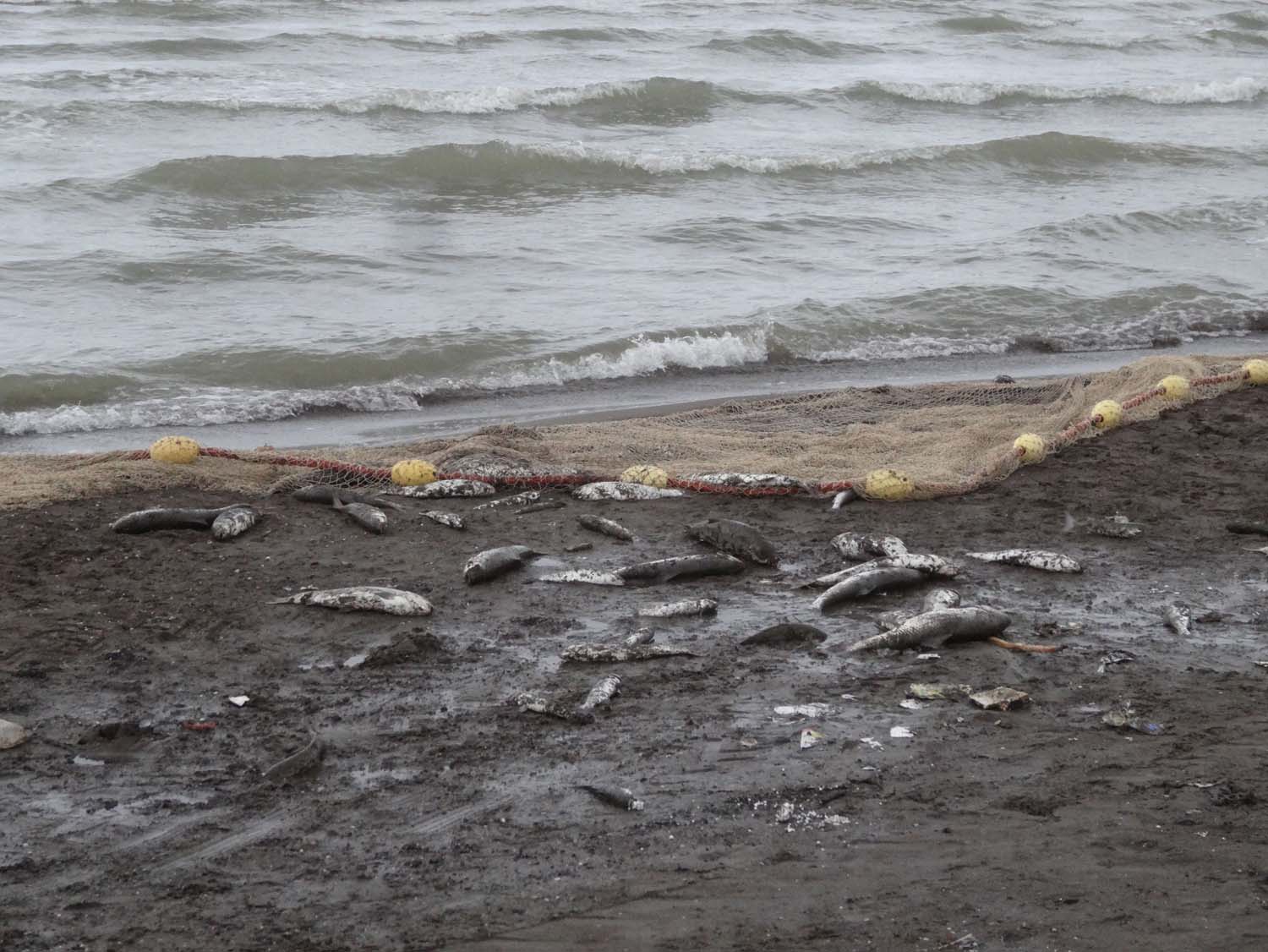 the meagre results of a day’s hard work

We were certainly seeing how diverse Iran is, how much the country has to offer. And we didn’t even have time to explore the western area with all the Kurdish settlements in the mountains. 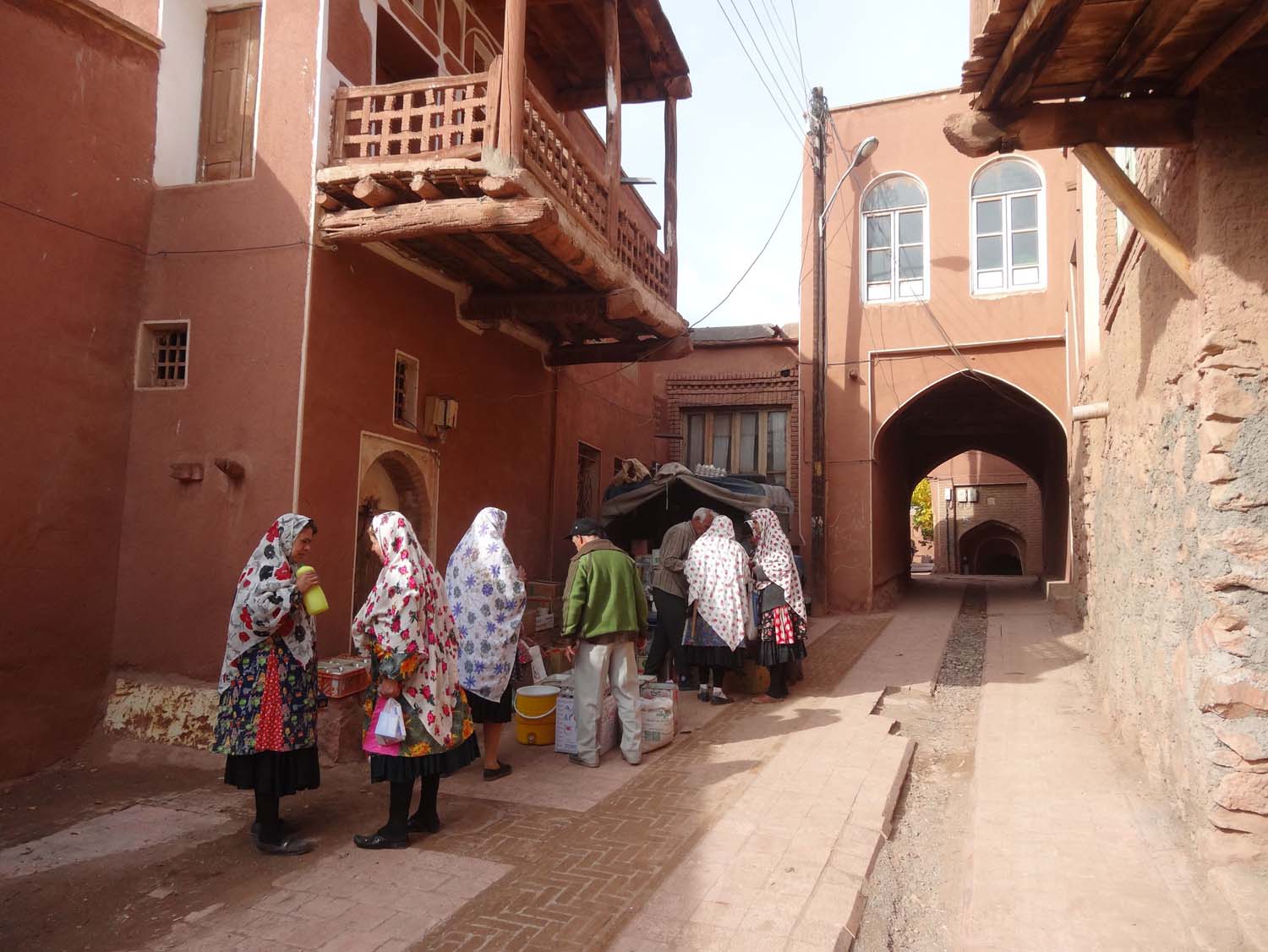 in Abyaneh the ladies have their own traditional dress 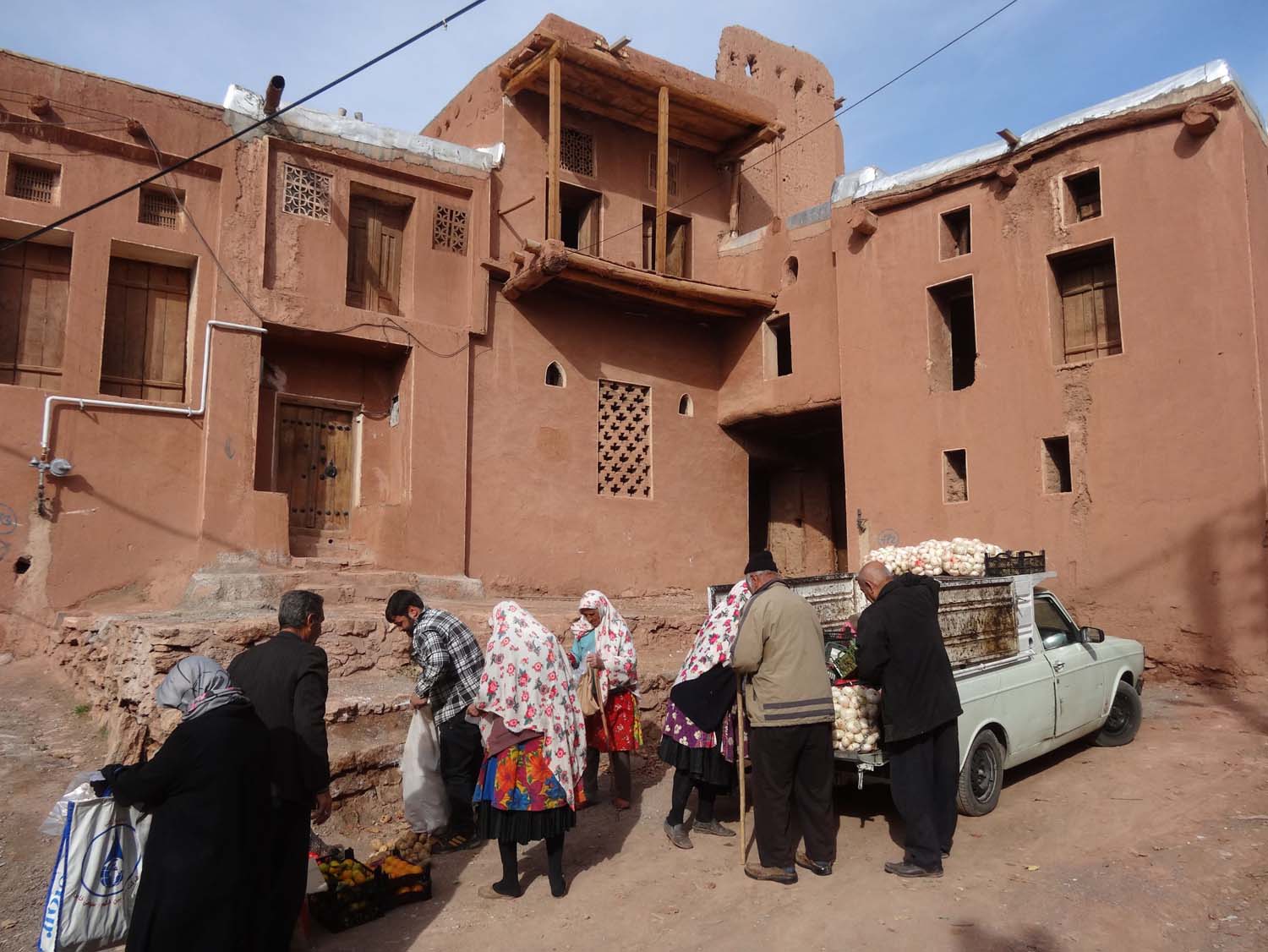 mini mobile market from the back of the car 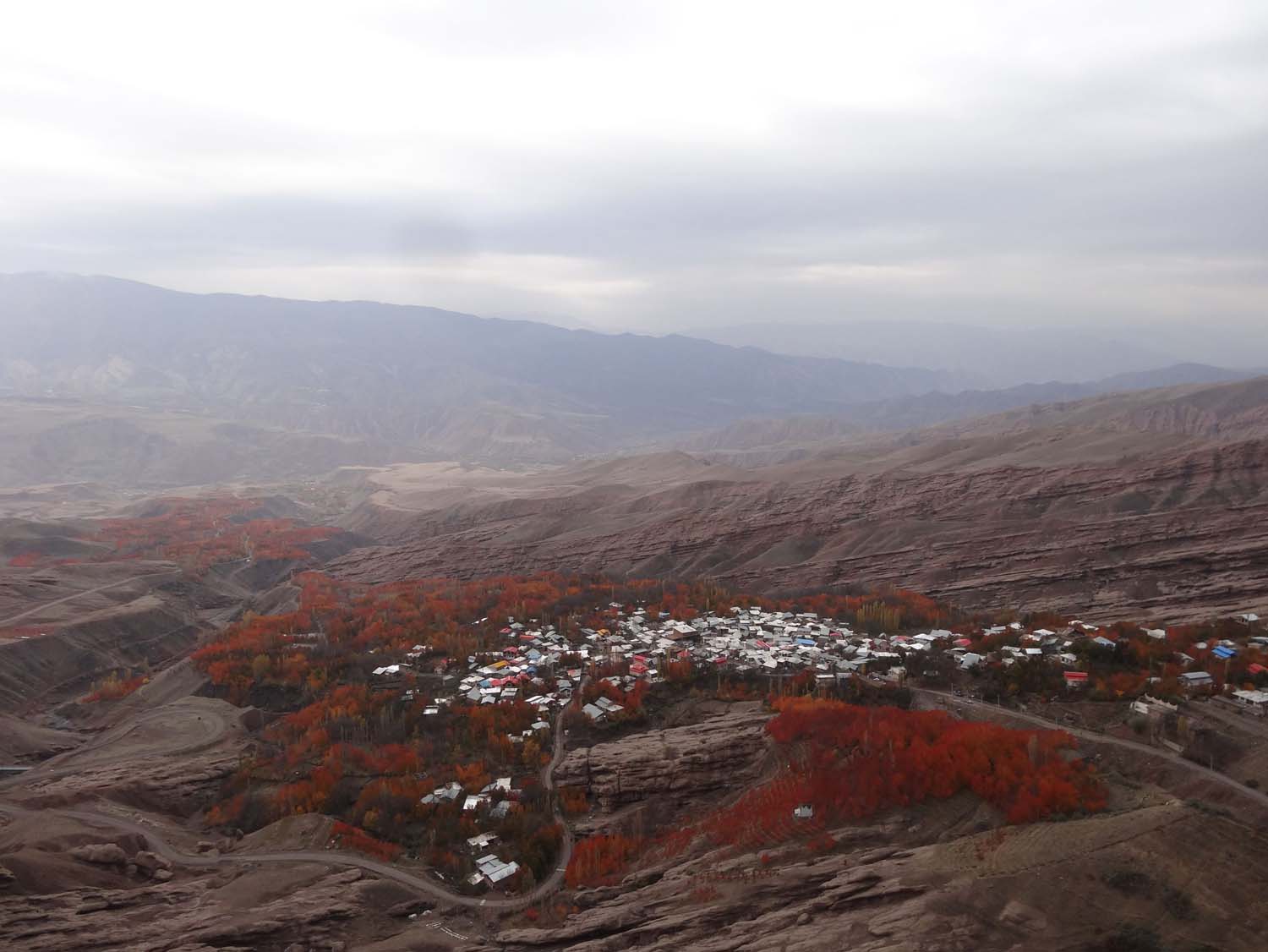 autumn colours in the Alamut valley, the reds are cherry tree orchards 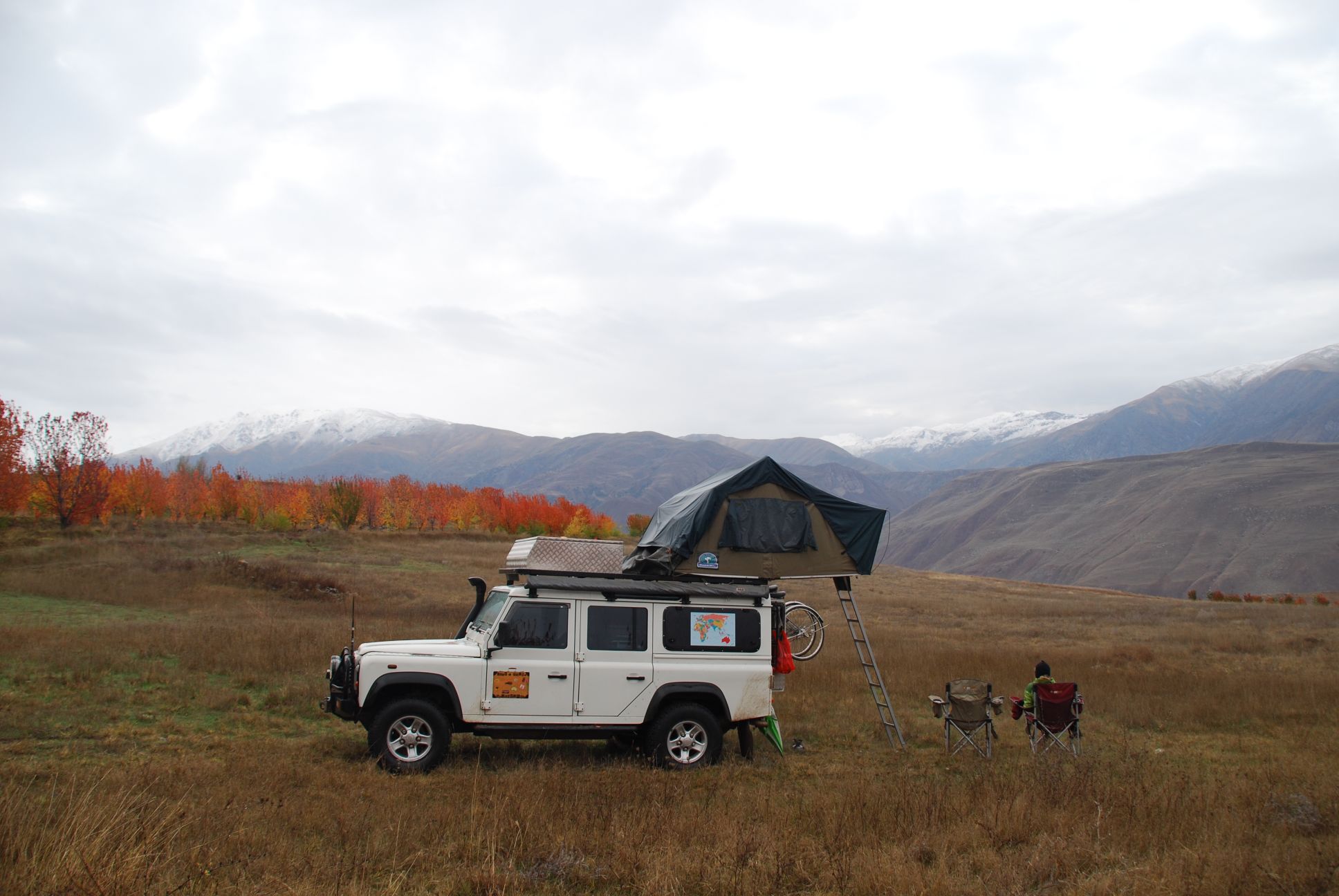 cold but stunning campsite, with the Alboroz mountains in the distance (we were too early for skiing) 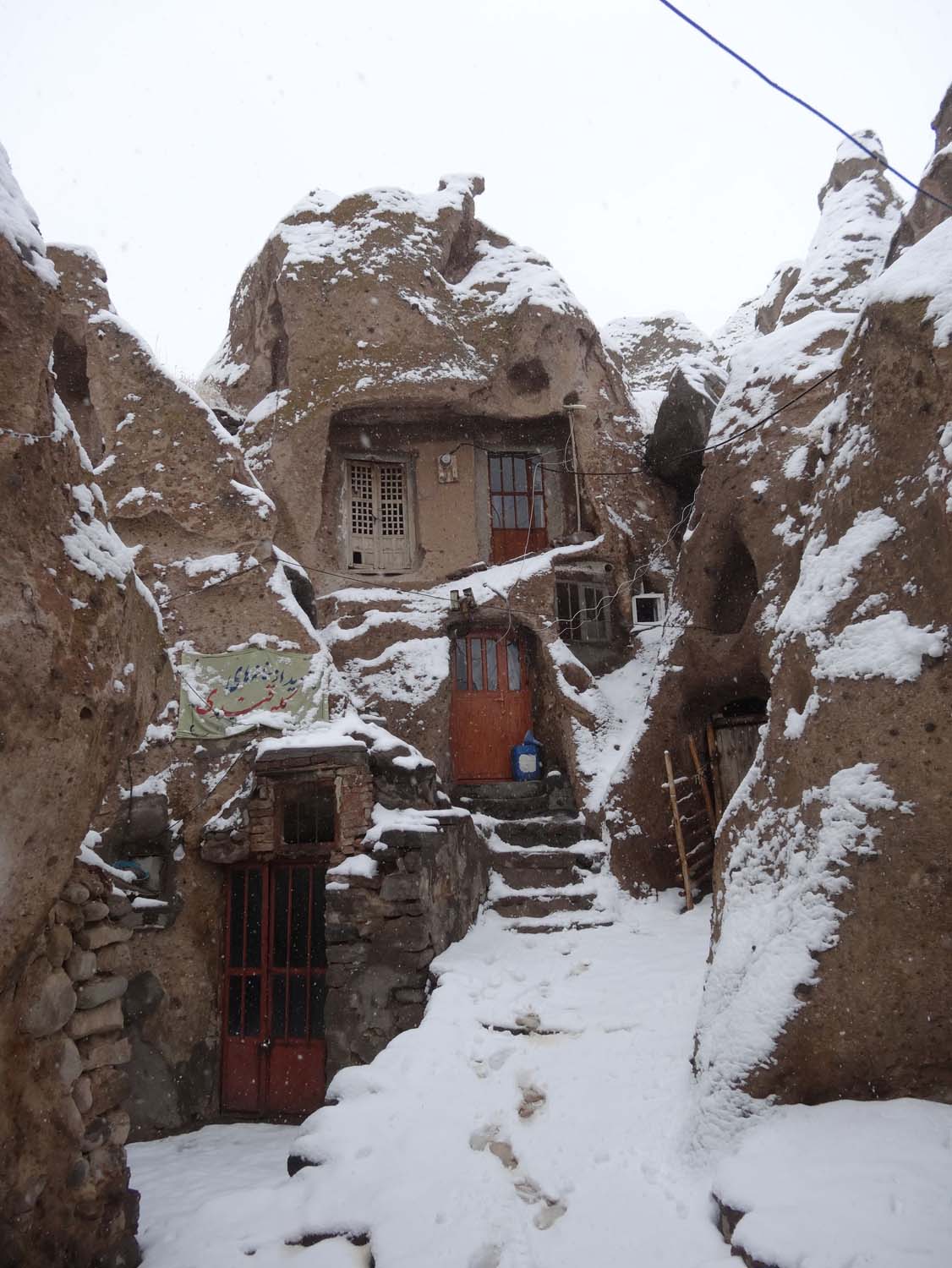 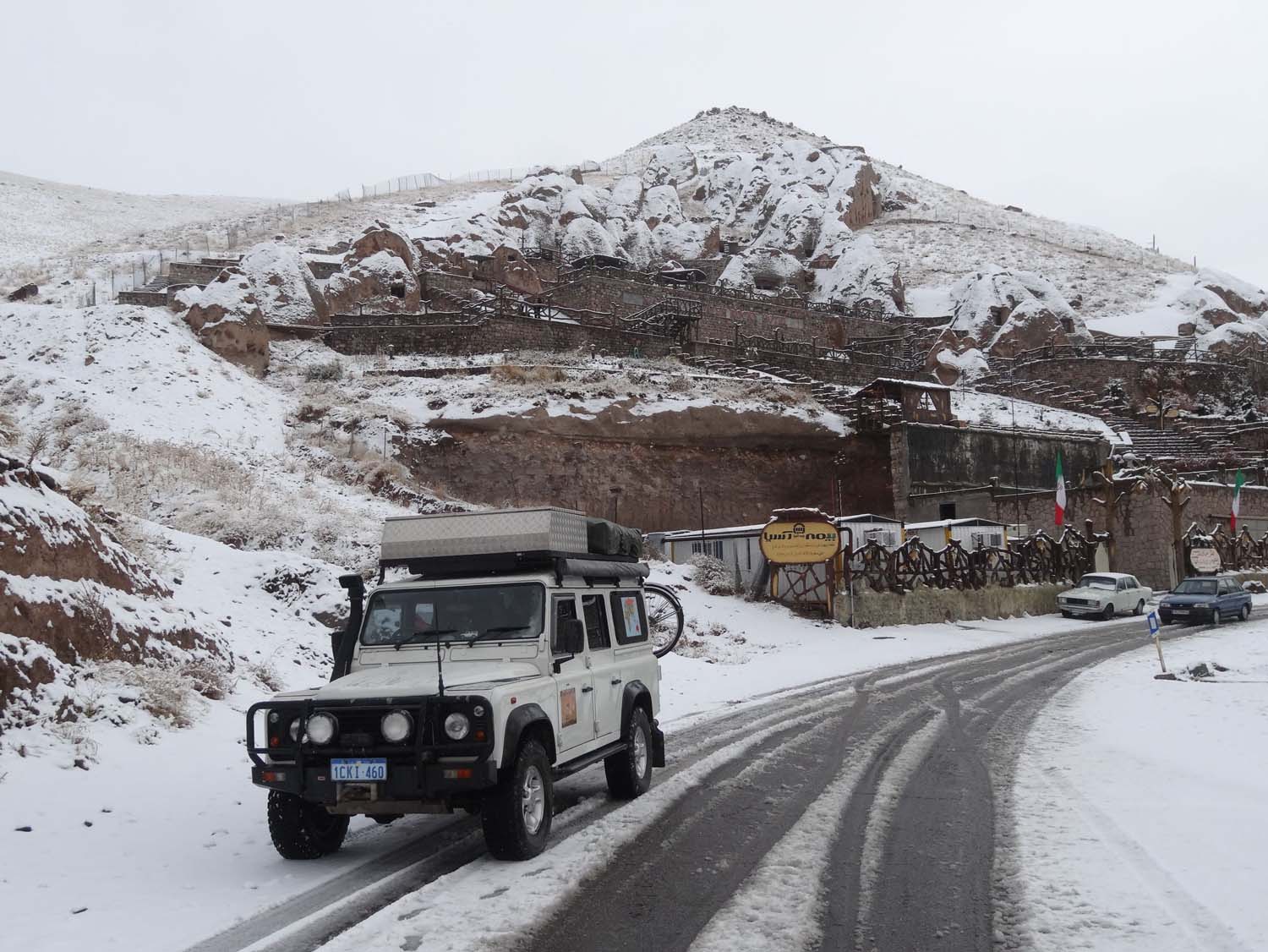 By the time we got to the salt lake it was dark. We parked in the middle of it and woke up to a stunning sunrise on the desolate salt flats. The sand dunes were beautiful and we saw many Iranian families gathered for picnics and driving around the dunes, it’s a Friday – their weekly day off. 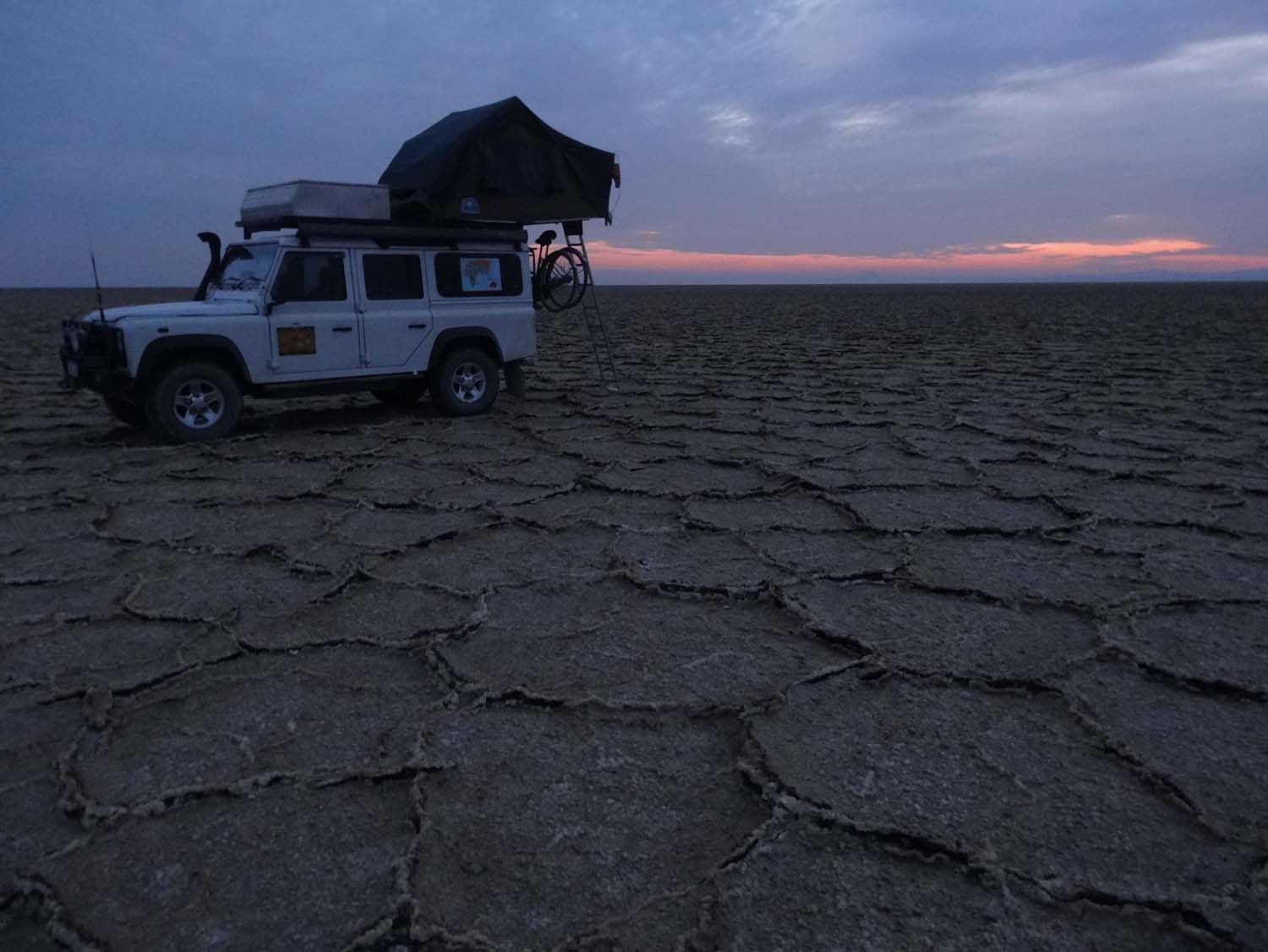 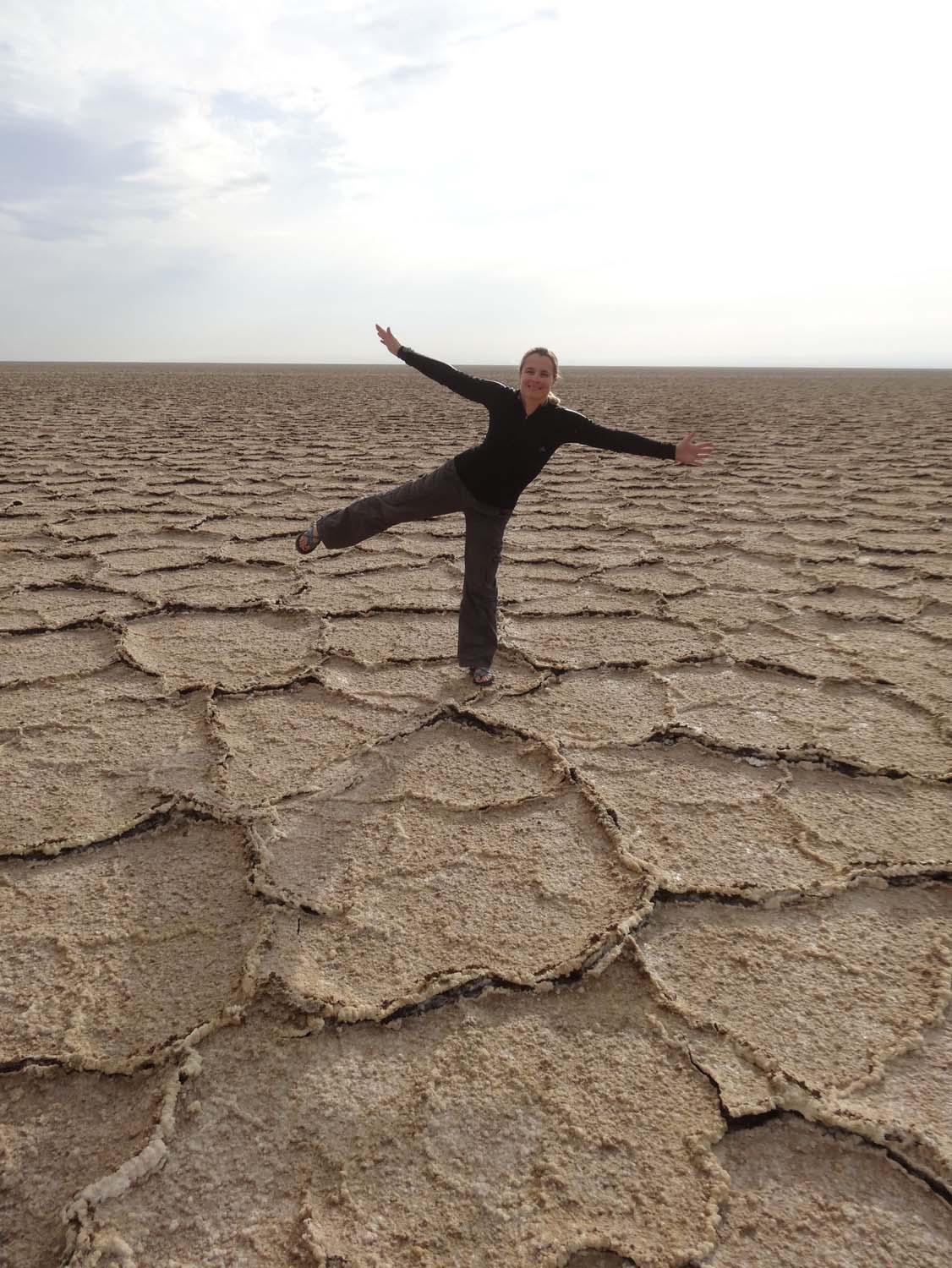 nothing on the horizon 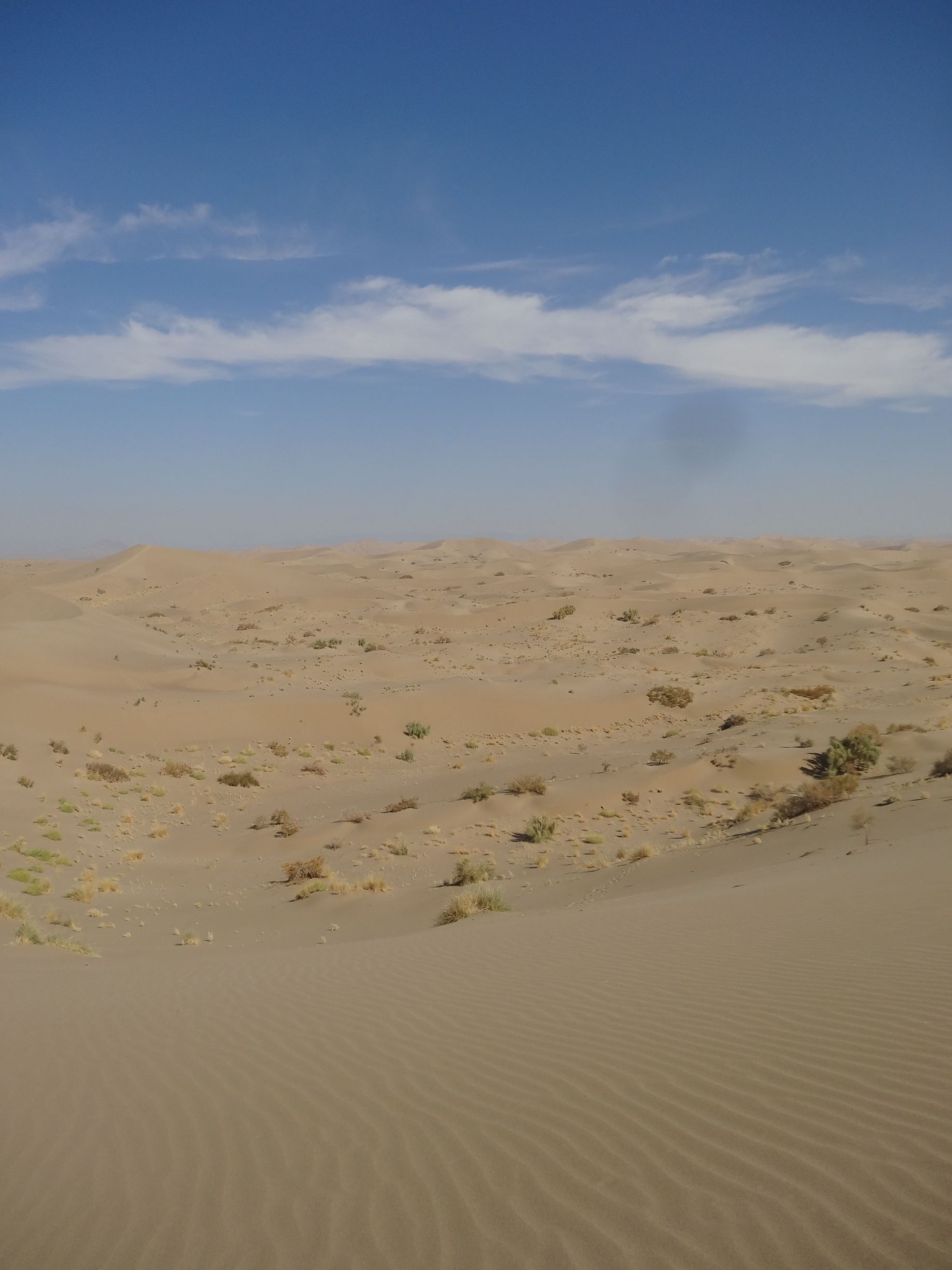 the dunes of the Dasht-e Kavir desert are simply stunning. It can reach 50degC here in summer! 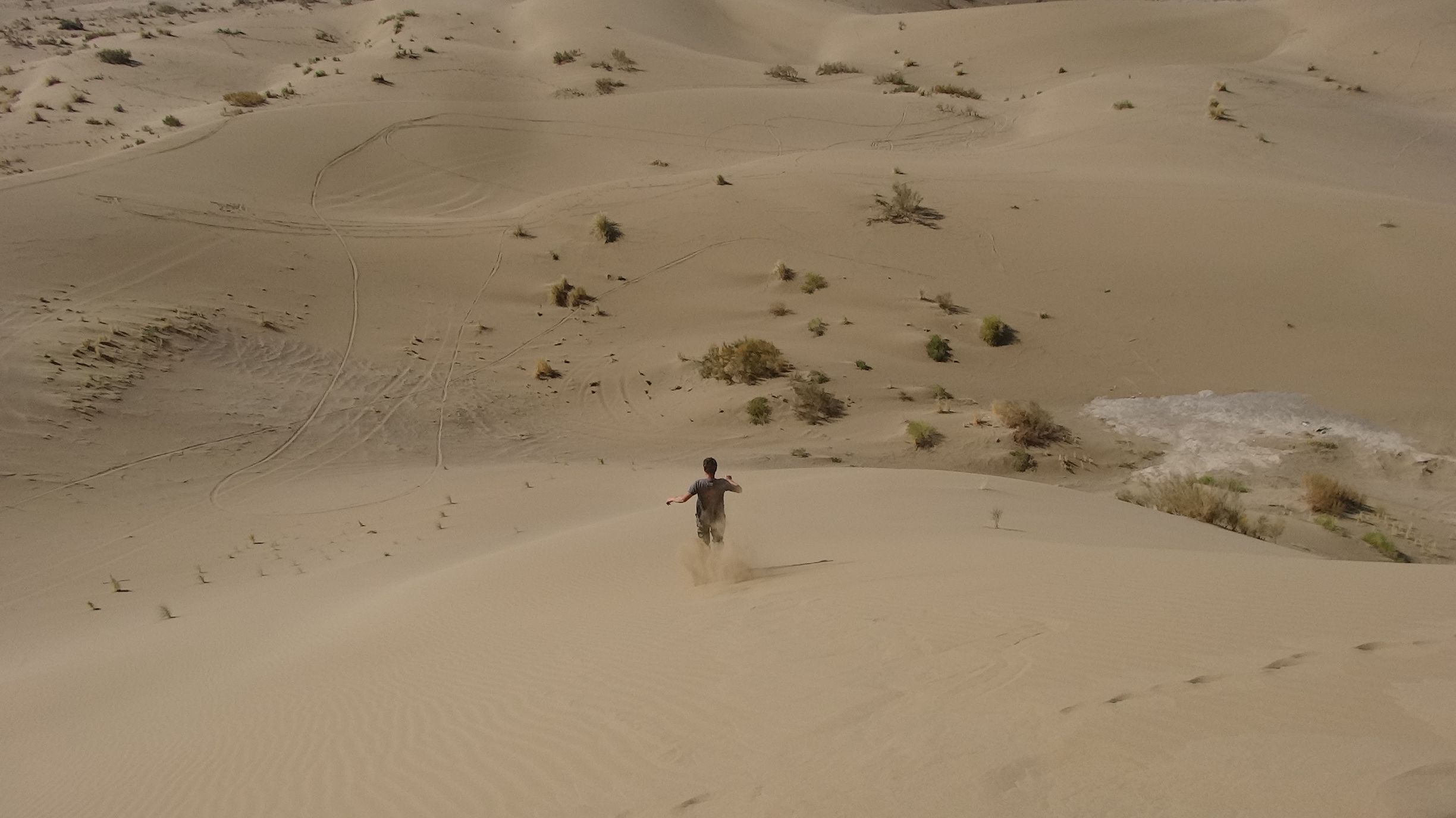 We got really excited when we see the Defender’s Iranian clone, a Pazhan, in the sand dunes. We drive over for a closer look and after a few minutes one of the girls jumped out and started to talk to Jude in perfect English. They are here for a day, 4WD-ing in the dunes and having a picnic with some friends. Even though at first glance the Pazhan looks like a Defender, it had a Mitsubishi engine and can’t be relied on for spare parts for a Defender as every part is slightly different. It is funny to see they have chosen to locally copy the Defender, in a weird way we felt a bit honoured.

The other local car, the Paykan, is apparently no longer made (although we did see some new Paykan Utes on the back of a big lorry).  Its based on the 1960’s British Hillman Hunter and they seem to last forever. Sadly everything moves on eventually, and nowadays you can see everything driving around. Peugeots are even made locally, but there are still plenty of Paykans on the street, making the scene look a bit like the 60s at times, without the sex, drugs and rock ‘n roll of course! 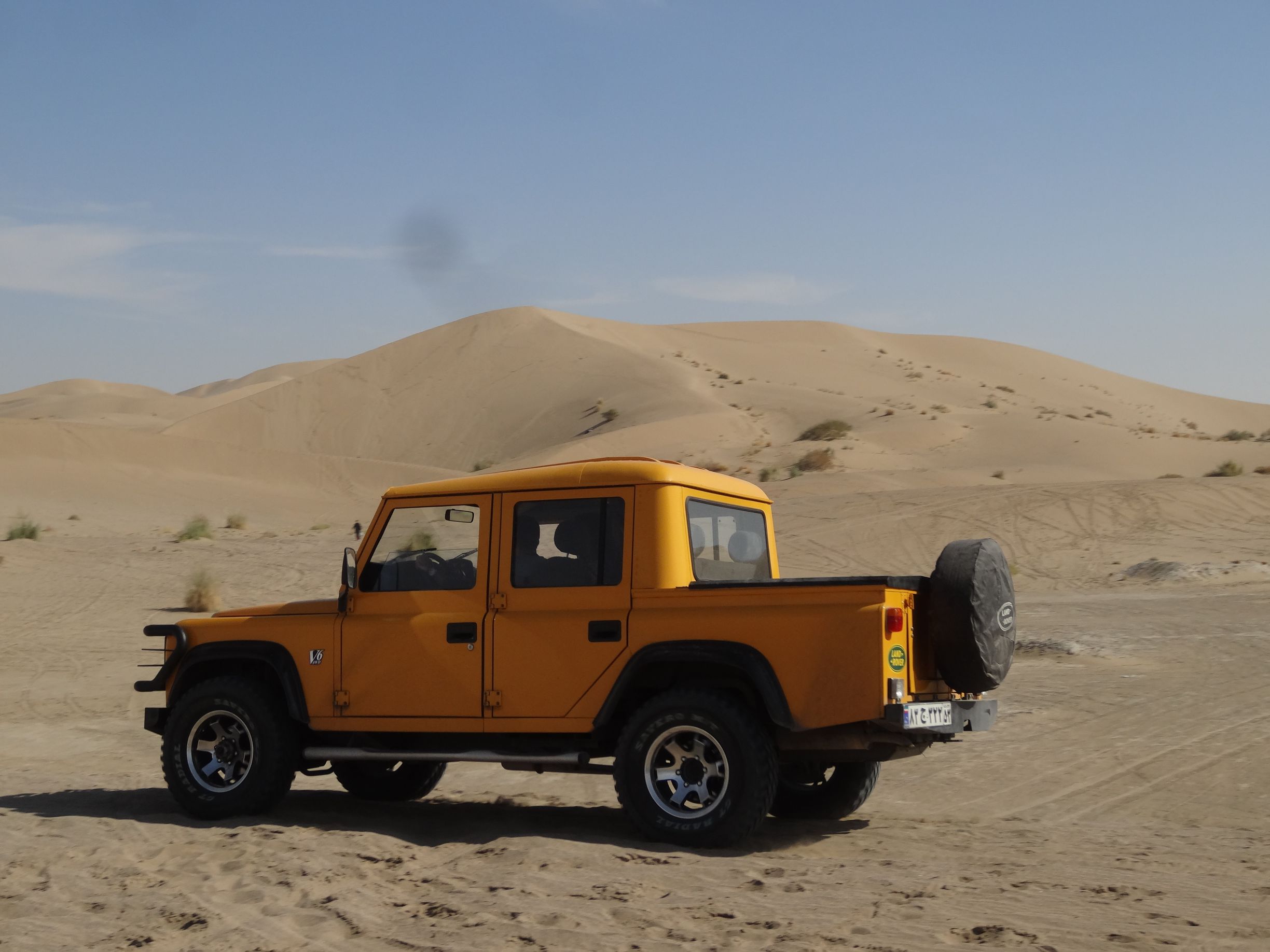 the Pazhan, a local copy of the Defender 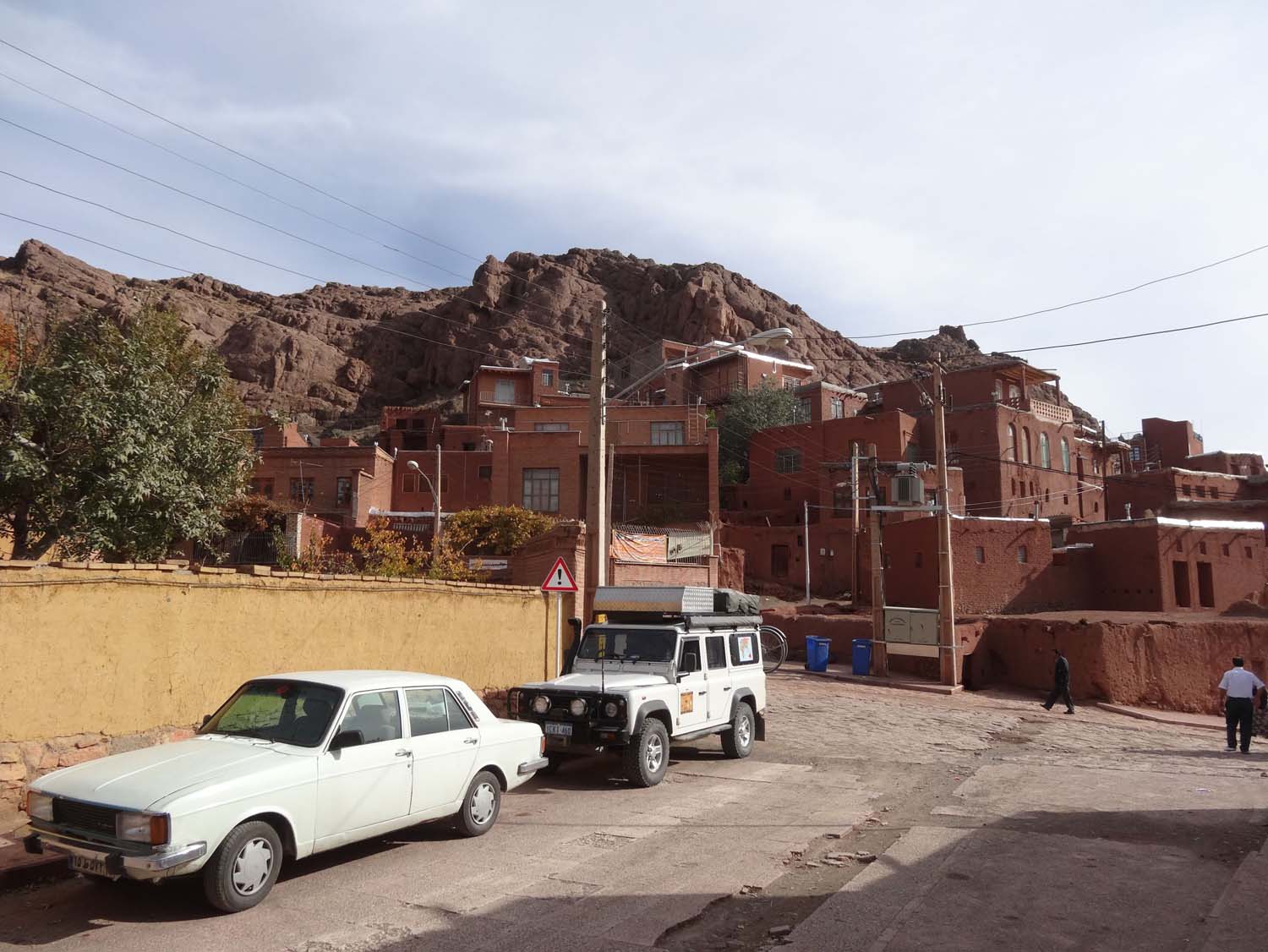 the Paykan, you still see many on the streets but they are no longer made