As has become tradition, we will share with you our favourite panoramas in our final Iranian blog post.

Iran was certainly one of the most surprising countries we travelled through. The country is certainly not perfect (but which country is?), the traffic is a nightmare and the pollution can be unpleasant (like everywhere else in Asia). But Iran has wonderful sights and overwhelmingly friendly and generous people, and that includes the officials. No matter where we were, something or someone would make us smile at least every 20 minutes – we just loved it.

If you have not decided on a holiday destination for 2014, we would definitely recommend a trip to Iran.

Iran is a vast country, we did nearly 5,500km in total and over 2,000km crossing the Dasht-e Kavir alone. Not recommended in their summer, apparently it can regularly reach 50degC.

A beautiful campsite on the long desert road from Mashhad to Yazd through the heart of the country. The mounds of dirt in the foreground are from the qanats, ancient underground water channels dug to bring water from the mountains to the cattle.

These two Zoroastrian towers of silence lie on the outskirts of Yazd. In use until the 1960’s, the dead were brought here to be picked clean by vultures. The walls built at the top of the mounds prevented anyone but the official attendants from seeing in.

View from our campsite over the ruins at Pasargadae, an ancient Persian city built by Cyrus the Great but soon superseded by Persepolis.

Incredible reliefs on the Apadana Staircase, shown here are the Imperial Guard. Plaster-casts taken over 200 years ago are on display in the British Museum.

The Palace of 100 Columns was believed to be where the empire’s military elite would meet the Emperor.

The ruins of Persepolis, the capital of the Persian Empire, its heyday was 300BC before Alexander the Great burned it to the ground.

Carpet anyone? The bazaar is absolutely full of them, with endless varieties of style, size and weave. If you are going to buy, make friends with a local to help. The Iranians buy them, as with gold, for an investment.

The Jameh (Friday) mosque is the most important mosque in Esfahan. The ablutions block in the centre of the impressive square is a replica of that at Mecca allowing would-be pilgrims to familiarise themselves with the layout.

Imam Square fountain in Esfehan, dating from 1600, is the centrepiece of this grand city. The square is second in size only to Tienanmen Square in Beijing and was originally used to play polo. The polo posts can still be seen on the square.

The Ballasting sand dunes in the enormous Dasht-e Kavir desert which covers the heart of Iran. It was a beautiful day without a breath of wind.

This extravagant merchant’s house was built in 1880 and there are several you can visit in Kashan.

Sunrise over Namak salt lake, 1,800km2 and located in the Dasht-e Kavir desert. 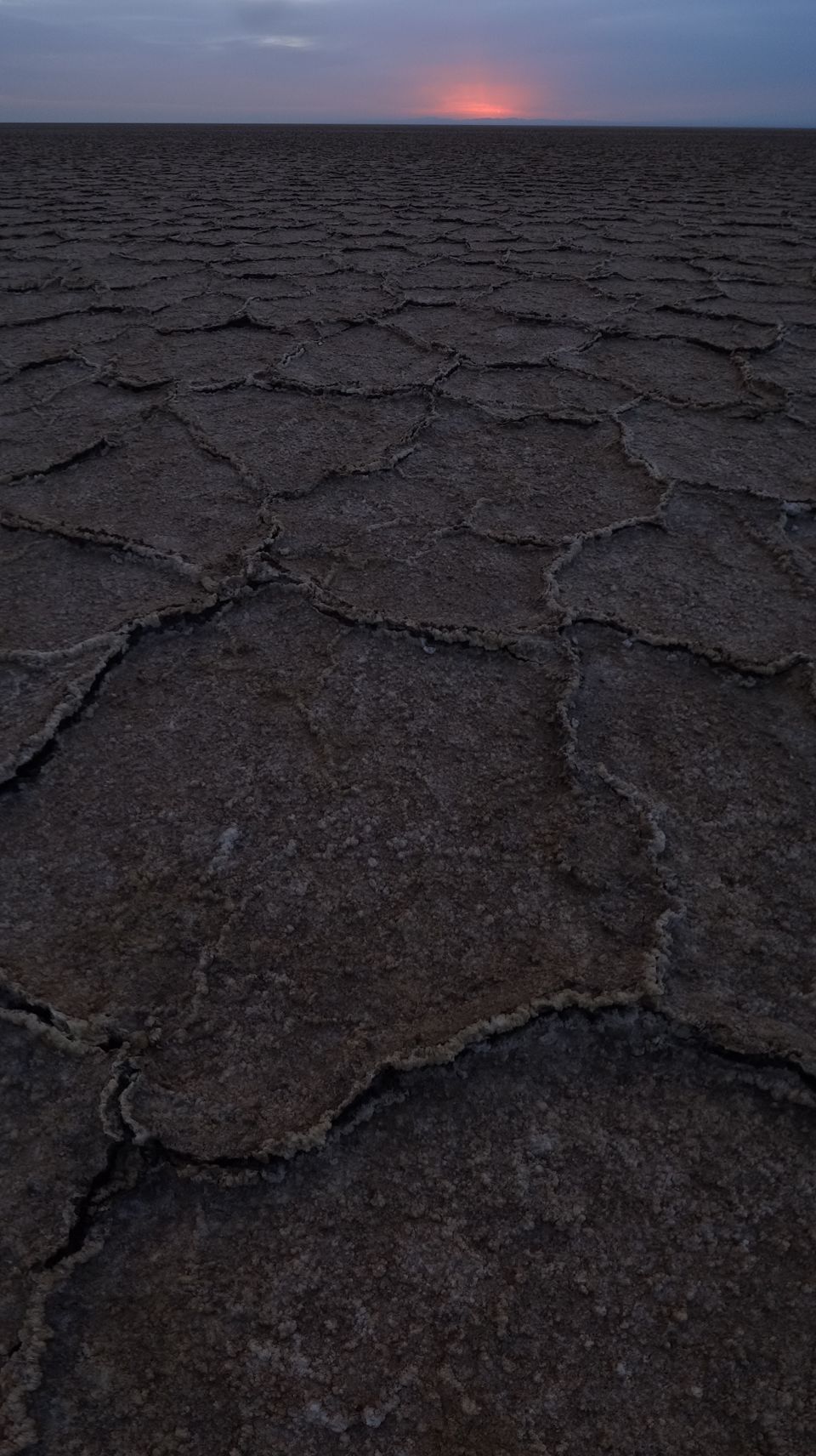 It wasn’t hard to find a flat camp site here.

Beautiful views over the Alamut Valley with the Alboroz Mountains in the distance and the autumn colours of the cherry orchards in the foreground. The view was from one of the Castles of the Assassins, it was from here in the 12th century that the leaders of the unconventional Ismaili sect hid and sent raiding forces to kill or kidnap leading figures of the Persian establishment.

Catch of the day at the Caspian Sea

We watched a whole team of fishermen working to bring in the catch of the day on the southern shores of the Caspian sea. A gaggle of ducks waited expectantly in case there were any scraps left for them. In the end the catch was so small it didn’t even amount to one fish per fisherman. Things look bleak for this ecosystem.

The volcanic crater lake is the centrepiece of the Takth-e Soleyman fire and water temple. The temple site is 1,500 years old and was once the spiritual centre of Zoroastrianism, which at one stage was the state religion. Followers worshiped earth, wind, fire and water, all present in this site with the fire being provided by volcanic gasses channeled to the fire temple in ceramic pipes.

We were invited to share a memorable meal with this Kurdish family in Takab. The Kurds live in the North West of Iran with large populations also in Iraq and Turkey.

We did our best to get the whole family in one picture, but failed. They certainly know how to party, with dancing, singing and card games enjoyed by all generations well into the night.

After a long day exploring the huge bazaar in Tabriz, we stopped for a well earned tea and qalyan (water pipe) with our hosts Sina and Mohammad. Whilst Jude was allowed in, these teahouses are usually male only.

Our hosts Sina and Mohamed snuck us in to see the celebrations to commemorate the death of Imam Hoessein in the Tabriz bazaar. Groups representing different areas of the city would perform in turn with beating drums and chanting, very dramatic.