Our grand ride on the Super Bus

Another early Saturday morning and we were ready to go before 7am. Chan came to our place to leave her car, and Hugh and Mingyuan picked us up with the luxurious bus (the old trusty Range Rover), needed particularly for the last 3km to our starting point as it had rained and the track in was a mud-slide.

After donning our pack covers as we skidded around in the mud because some drops were felt, we quickly started our hike on Mount Superbus (dubbed the Super Bus for the weekend). It was the last rain for the weekend, so everything stayed nice and dry which was lucky as the temperature overnight dropped to below zero at our Lizard Point South campsite. 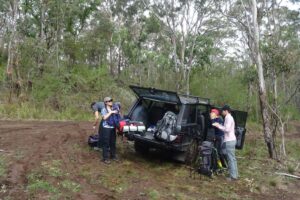 getting ready for the hike at the Super Bus

The first section of the trail was on a gentle slope but with lots of massive trees down it meant we had to climb over, hike around, and limbo under many. Progress wasn’t fast, but we covered good ground. There were some signs hinting of the place of disaster a few years after WWII when a plane carrying a sick baby crashed into the mountain, and soon after we went from a gentle slope to a near vertical climb to get to the plane en route to Mt Superbus South Peak campsite. 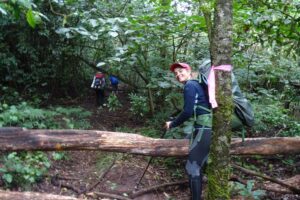 Jude climbing over one of many fallen trees, Mingyuan and Chan are up ahead 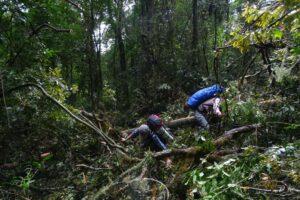 Mingyuan and Chan trying to get across a fallen tree

Hanging onto roots and small scrubs we pulled ourselves to the location of the plane, at times hiking up in the creek and sometimes to the side of it. We ate our lunch in the dry creekbed and had another short stop at the plane crash site. Not long after that we reached flat(ter) ground and a campsite. We had another short little mini-break there, but pushed on as we still had quite a bit of ground to cover before we would reach our campsite. We bumped into two other hikers who were looking for the summit of Mt Superbus, but didn’t see anybody else until we reached our campsite in the dark. 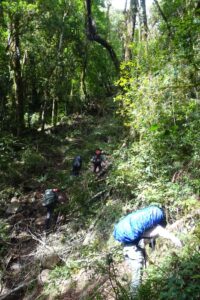 Mingyuan, Hugh and Jude climbing up the steep slope, Chan traversing to get to the slope 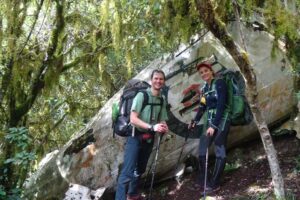 Jon and Jude at the plane wreck

Unfortunately somebody had already set up a tent despite Hugh booking both spots available, so it was a bit of a squeeze with our 3 tents. We enjoyed a delicious dinner (although Hugh lost quite a bit of his), wine from a can and some port. And of course chocolate. 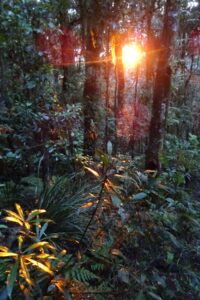 the light at sunset dancing through the trees, it was pure magic 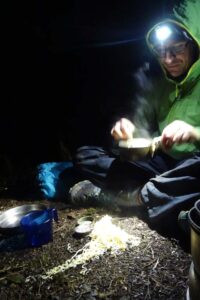 oops, half of Hugh’s dinner on the ground

It was freezing up there! Luckily we were sheltered in amongst the moss and lichen covered trees as we could hear the wind howling over the top of the trees and around the cliffs.

The next morning we saw our views when peaking through the trees, taking care not to step too far as the drop off was very steep and very sudden…

After breakfast we hiked to Lizard Point and bumped into many people. Something must have gone wrong with the booking system as quite a few claimed they had booked the same site as us… The views were amazing from this point and in the sheltered area it was actually getting warm in the sun. 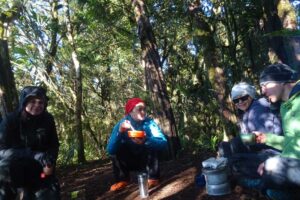 Chan, Jude, Mingyuan and Hugh at breakfast, it was very cold 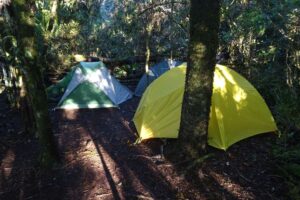 our 3 little tents squeezed into a small area 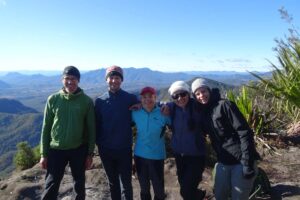 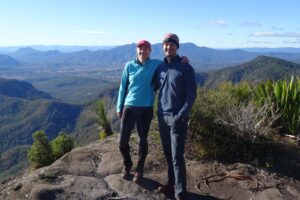 Jude and Jon at Lizard Point on Mt Superbus

We continued our hike, the scenery changing every few hours. We passed giant spear lilies (Doryanthes palmeri), hiked trough moss- and lichen covered gnarly trees, rainforest, montane heath sections, and open eucalypt forests in the valleys. On our second day we were exposed quite a bit to the steep cliffs as the path wound its way to the Steamers – the Stern, Prow, Funnel and Mast. Named because the four peaks that stick out resemble an old steamship.

The hike was stunning, and although we didn’t go to the lookout due to time constraints, we enjoyed the views (but not the cold, strong wind trying to blow us off the narrow and, at times, exposed track) and even found a tiny patch of ice on our way back. 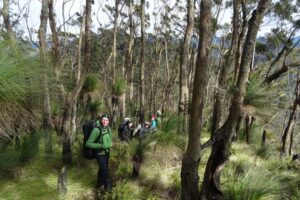 Hugh, Chan, Mingyuan and Jude heading down from Lizard Point 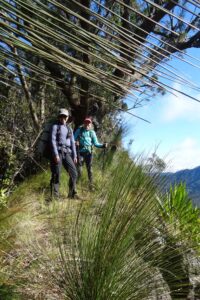 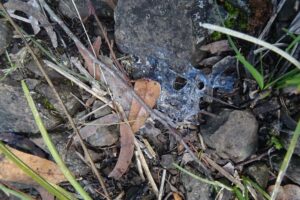 ice! see, it does get cold in Queensland 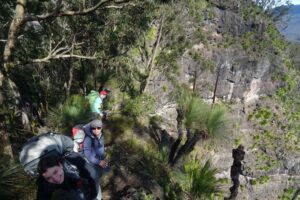 Chan, Mingyuan and Jude on a slightly exposed section of the trail 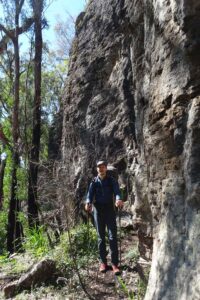 Jon at the bottom of the cliff 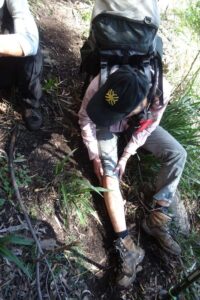 Chan has a stack, luckily it isn’t too bad and she can walk out 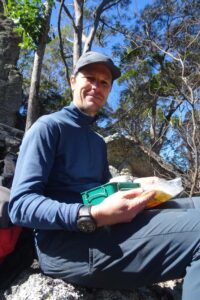 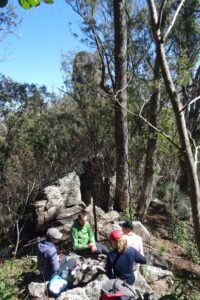 At one point we lost the trail for a bit and Hugh went out to explore, we had gone too far along the base of one of the steamers and had to backtrack a short, steep section. From there on, after passing one of the last imposing Steamers, it was an old-fashioned off-track bush-bash for the last kilometer back to the car. 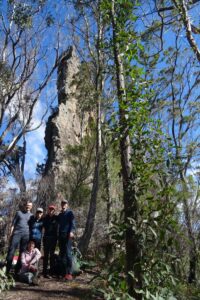 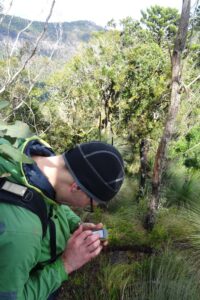 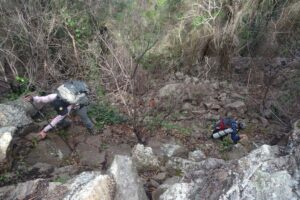 Mingyuan and Chan hiking down, it may not look steep, but it is 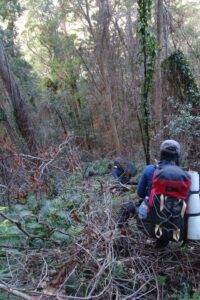 Hugh and Mingyuan bush bashing through the thick scrubs back to the car, we had 1km of this

We got changed, and had a (now obligatory) thick-shake on the way home. It was great discovering a completely new area so close to home.