Our first taste of freedom in Tanzania

Before we were allowed to drive ourselves in Tanzania, we had to jump through some hoops. Luckily we had already done some of these in Kenya, so after not too long we were given the all clear and, most importantly, our own immobilizer keys so we can actually start the car.

Our first weekend of freedom was spent in Dar es Salaam where we were invited to join Karl, Scott and Ahmad for some wakeboarding and biscuit riding. This was followed by a yacht race in the bay with Ahmad, Tim and Karl in the afternoon and some kayaking with Paul the next morning. We also had to jump some more hoops that weekend to become full members of the Dar es Salaam Yacht Club. 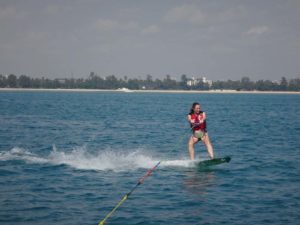 Jude wakeboarding on a kitesurfing board 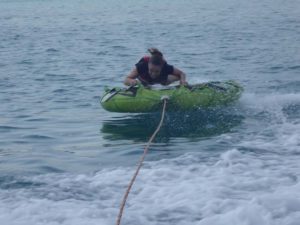 Jude getting some air on the biscuit 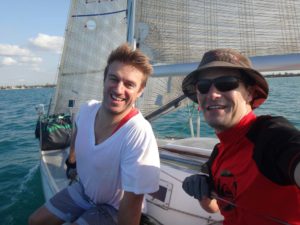 Tim and Jon adding weight to make us go faster 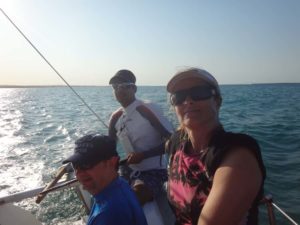 Ahmad, Karl and Jude doing all the hard work 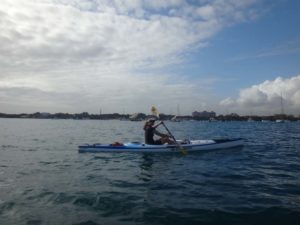 a quick paddle in the bay on a Sunday morning

Becoming a full member of the club involves lots of paperwork, and even more signatures from all sorts of minor club dignitaries. Next, we had to do at least 5 activities (more signatures to prove this) before we were able to hand in the next form to apply for full membership. As the submission deadline was coming up very soon, this was a bit of a challenge. Then, you are discussed at the ballot meeting which is only held 4 times a year. But, all paperwork has now been submitted and we can relax. The only thing left to do now is attend the introduction meeting, also only held 4 times a year. If you miss it, you wait 3 months… We should be full members soon, so we can invite you to the club too, which is actually lovely and worth the effort!

The real freedom came when we decided to drive to Saadani national park on the coast in Tanzania in our next weekend (north of Dar es Salaam). As there have been many restrictions on driving due to the security challenges, we were one of the first to go out of the ‘zone’. And that meant we had to submit a ‘Journey Management Plan’. Yes, more hoops and more signatures. The journey management plan is a 10-page document that has to be filled in, maps added and routes measured and described. It also requires a full risk analysis and signatures of both a line manager and the security department… A lot of work for a weekend away…

It was all approved and we were off on a Saturday morning just after 6am. The road was better and quieter than we expected and after only 2 hours we arrived at the park gate. Maybe we didn’t need to get up so early… We continued to the main tourist office within the national park to pay our fees, checking out campsites along the way to decide where we wanted to stay. It wasn’t a difficult choice: the campsite next to the beach was our favourite.

An empty bus at the campsite was being raided by cheeky vervet monkeys whilst the school kids were all out swimming. One of the monkeys scared all the other cheeky buggers by hooting the horn several times! Luckily we had seen this so we could keep our windows closed whilst enjoying our lunch in the back of the car (for shade), although that didn’t stop a bunch of them climbing on to our car and checking us out! 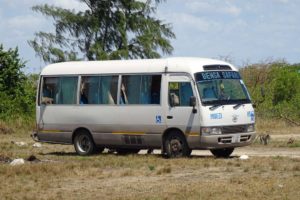 cheeky buggers in the bus, the one in front managed to scare all of the others (and himself) by hooting the horn, several times. Hilarious!

cheeky moneky checking us out, he looks a bit confused about the glass…

At night the national park really seemed to come alive. During the day we struggled a bit with finding animals, but as soon as the sun set they all appeared. And it was at our campsite where it was all happening!

Jon was taking some long-exposure photos of the beautiful night sky as there was no moon. With all our torches off, he heard some rustling in the bush next to us, and after taking the photo, he used his torch and saw eyes. Jude went to investigate and soon discovered the source of the rustling: an African civet watching her from less than 5m away! He then disappeared into the thick bush, but we were lucky enough to find him again walking along the edge of the bush on the beach. We followed him for a bit, he seemed totally oblivious to us walking behind him. 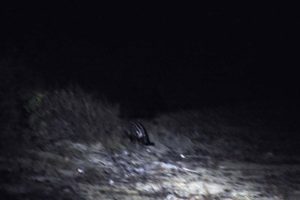 an African civet bumbling along the edge of the beach

As we came back to our campsite, Jon noticed we had a flat front tyre. We had planned to go to bed early so we could get up early for another game drive, but now we had to change the wheel. As it was our first flat with this car (actually our first flat in Africa), we had to get the manual out so we could follow the instructions as the wheel hangs underneath the car and requires some specific steps to get it out. We got the job done and were still able to do our game drive early the next morning. It was worth the effort, because we spotted some more new animals, including a couple of new birds for us like the Madagascar Squacco Heron. 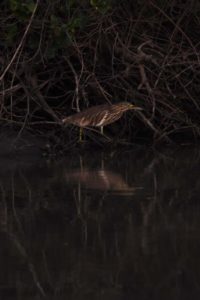 Lunch was again at our beach campsite before we started our journey back home. We wanted to drive back through the forest, an area where you can still find colobus monkeys. The track is indicated as a main road through the park, but after a short distance this quickly became a very overgrown and narrow forest track. Branches on both sides were making ‘nails-on-black-board’ sounds whilst we desperately tried to avoid making any scratches on our brand-new-looking car on our first weekend out of Dar…

Progress was slow, but we had to continue as we needed to leave the park by 4pm at the latest so we would not have to drive back in the dark (not allowed). Turning around was not an option as that would add a lot of km. And then we found a huge tree laying across the road at the tiny deserted village of Gongo. Bugger! Turning around now became the only option which is not easy on a narrow bush track, but using the car as a battering ram we managed to make a million-point turn and start the long drive around, past all those branches attacking us again from both sides!

the end of the road for us…

In a race against the clock with the debilitating factor of speed limits and speed bumps, we managed to arrive in Dar as the sky darkened. With twilight in the tropics not being a long time of the day, we had just made it! A good thing as we had to still make the call to the security department to let them know we had returned on time! Weekends away in Tanzania come with their own interesting challenges, but we are cherishing the freedom and can’t wait till the next road trip! 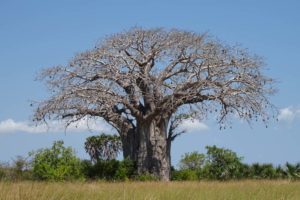 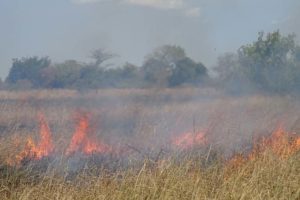 they seem to do a lot of controlled burning here in Tanzania in the national parks, have not seen that anywhere in Kenya.