We wanted to build our dream car, so we would have a forever car with all the creature comforts we want, plus space enough for all our toys that have to come on a long trip. But which car would we buy to build this dream car? That became the million-dollar-question…

We want to build a BOB (‘box on the back’), so we needed a car that can carry all that weight. We learned about empty weight, GVM, kerb weight, and payload. We needed to find a car where we could build a box that would be big enough to build a king-size bed (north-south facing of course so we don’t have to climb over each other to go for our toilet stops in the middle of the night), have space for a toilet inside as well as a fridge and some seating. So we learned about wheelbase, width of car and how to calculate how far you are allowed to ‘hang over the back’ (thanks John M).

We quickly whittled it down to a few contenders and discussed the merits of a Mercedes G-wagon professional, a Toyota Landcruiser (79-series) and a Landrover Defender 110 and 130. We even created a spreadsheet with all the details for those (and several other) cars. It came down to a few key-things for us.

Toyota Landcruiser (the one we looked at near Rockhampton)

The weight of the car was quite critical for us as we anticipated a BOB including all toys and essentials would weigh quite a bit. ‘Payload’ especially became our favourite word of 2020,

Or, in words, payload is the maximum a car is allowed to weigh (Gross Vehicle Mass) minus what it already weighs (this is what most car manufacturers call ‘kerb weight’, which includes some fuel, a weight allowance for a driver and all other things that are normally attached to a car to make it a car). Here is our summary spreadsheet for the main options for us.

* the Toyota Landcruiser doesn’t come standard with a maximum weight of 3780. It needs to have an upgraded suspension etc to achieve this, which means they are quite hard to find on the second-hand market.

Next we looked at the wheelbase and the fuel consumption of the cars.

*a standard Toyota Landcruiser has 2 back wheels that DO NOT follow the tracks of the 2 front wheels…. Only some cars that have been modified have this, making it again harder to find one on the second-hand market.

And finally we looked at the cost of each type of vehicle. This is a bit hard as of course the price tag greatly varies depending on how well it is looked after, how many km it has on the odometer, how old it is and how many modifications have been added to the standard vehicle.

But simply put, a Mercedes G-wagon Professional G300 sells for around twice or three times the price of the other cars. You can pick up a decent Toyota Landcruiser 79-series (with the necessary modifications of a GVM upgrade and axles widened properly to ride in one-tyre-track) for about 50% more than a Land Rover. And Defenders are an odd bunch. As they are no longer made, they seem to have gone up in value significantly. A Defender 110 should be a lot cheaper than a Toyota Landcruiser, and the 130 a little more expensive (also not as common to find for sale), but in these crazy times with covid we often saw Defenders that were more expensive than a Landcruiser. We also found several Defenders for sale with hardly any kilometers on the clock. Their owners bought them brand new with the idea to sell them several years later (now) and make money selling them at a higher price as they get scarcer as the years go by…

We’d be very interested to hear what you would pick based on the information above. We went around in circles for a long time. Looking for G-wagons, hoping a reasonably priced one would pop up one day (dreamin’!!), then shifted our attention to the Landcruiser with all the modifications and even went for a test drive in one near Townsville. The payload of the Toyotas with increased GVM made them appealing and we dismissed the Defender as it seemed it wasn’t possible to build a box on the back (BOB) with only 1200 or nearly 1400kg for the 130.

But then we realized that:

A random bunch of reasons, but we finally decided to start looking for a Defender 130, preferably a single cab, and preferable one with low km. We won’t tell you what it’s like to find a needle in a haystack….

In the end we settled for a dual cab with low km that already had a snorkel fitted, a bull bar plus winch as well as a long-range fuel tank. We found her towards the end of 2020, and picked her up mid January 2021. She was located on a farm in northern NSW, so last weekend we drove down together with Mingyuan and Hugh (thanks again for all your help guys! wouldn’t have been able to do it without you), and after spending the weekend in Wooli getting to know her a bit, we drove her back to Queensland on Australia Day.

And here she is, meet Lara 3, she doesn’t know it yet, but she will be undergoing some major surgeries and modifications in the next months. But we think she looks pretty cool already. 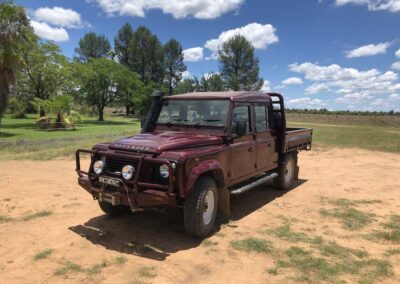 meet Lara 3, we are super happy

Stay tuned to see where we are going to be working on the car as we had been looking for a while for a house with a garage that is high enough so we can park her inside and start working on the modifications.

By buying this car we are nowhere near finished with our journey to build our dream car…. It is just the start…. You’ll be able to follow our progress over the next 6-12 months right here as we will try to capture it all and tell you about it!