Orkhon Valley – also known as the road to nowhere

We arrived in Kharkorin (Karakorum) late in the afternoon and stopped at the imposing monastery, Mongolia’s first Buddhist monastery. The grounds were still open, but the ancient temples were closed so we only walked around for half an hour before venturing into town to find a restaurant. We don’t often stay near towns so when we do we like to eat out.

We had a good meal and got chatting to an English guy who had just spent a month in West Mongolia and had heaps of information. He told us the border had been closed, as well as the national park Altai Tavan Bogd due to foot and mouth. He had also heard of the impassable river on the northern route to the border and suggested we check with Murray, the owner of the Fairfield hostel in Tsetserleg for current updates.

That night we camped next to the monastery and the site of historic Karakorum. An amazing town set up by Chinggis Khan around 1200. In that time there were no towns in Mongolia as people were nomadic, but this town was built to attract the smartest people from around the world, many of whom were invited to live there. It featured 12 places of worship, all for different religions! 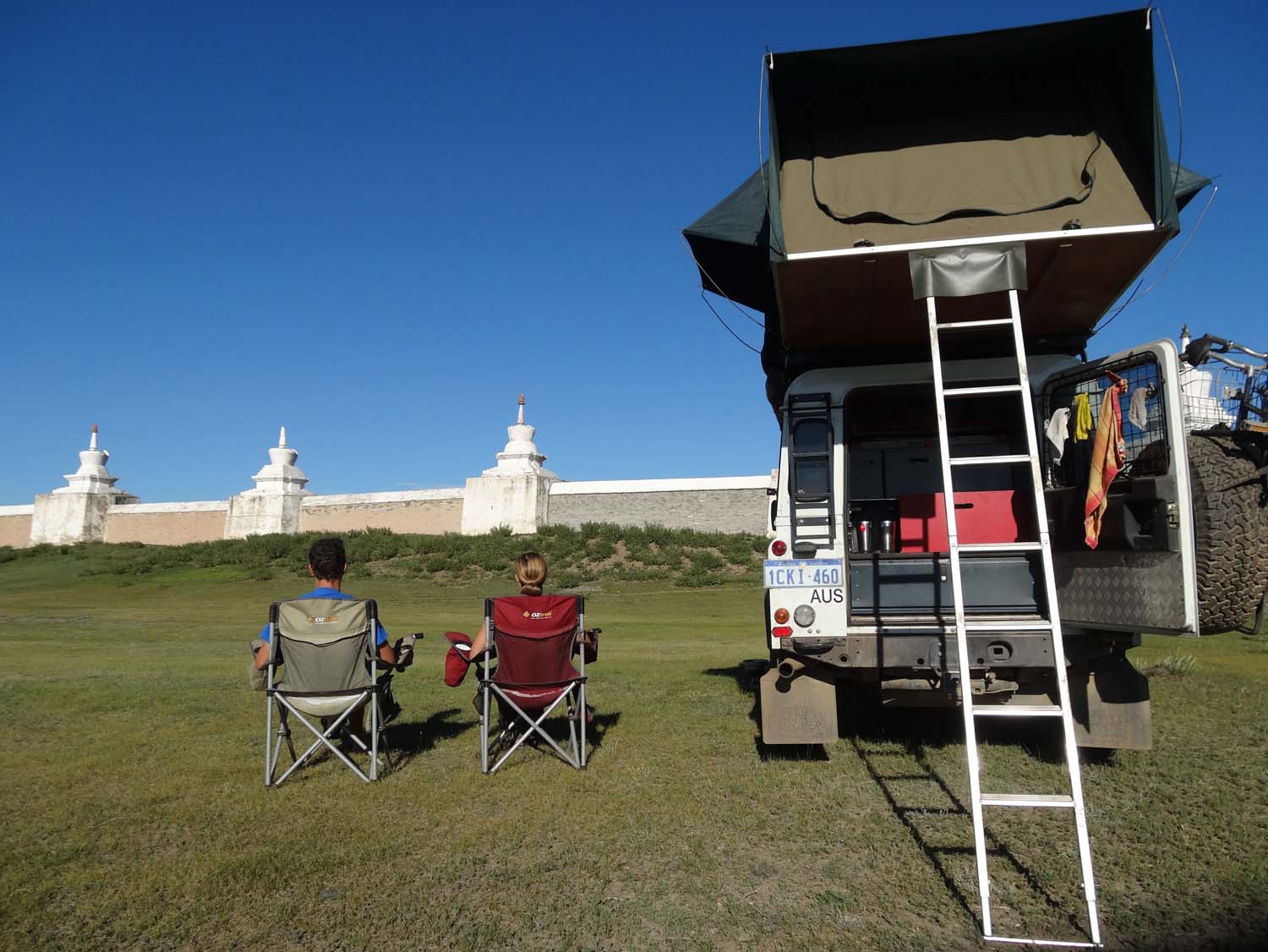 breakfast next to the ancient town and monastery of Kharkorin

The next morning we added another Unesco World Heritage Site to our list: the 3 remaining Buddhist temples inside the old monastery. They are now a museum and we enjoyed a guided tour of the temples learning a lot about Buddhism. Did you know the reason Buddha is usually depicted with a yellow or golden body, blue hair and long earlobes, is because when they tried to capture the enlightened Buddha, his image was so bright they had to use his reflection in a pond. This meant his body appeared yellow / golden, his hair blue and his earlobes stretched! And they have used that image of him ever since. I never knew! 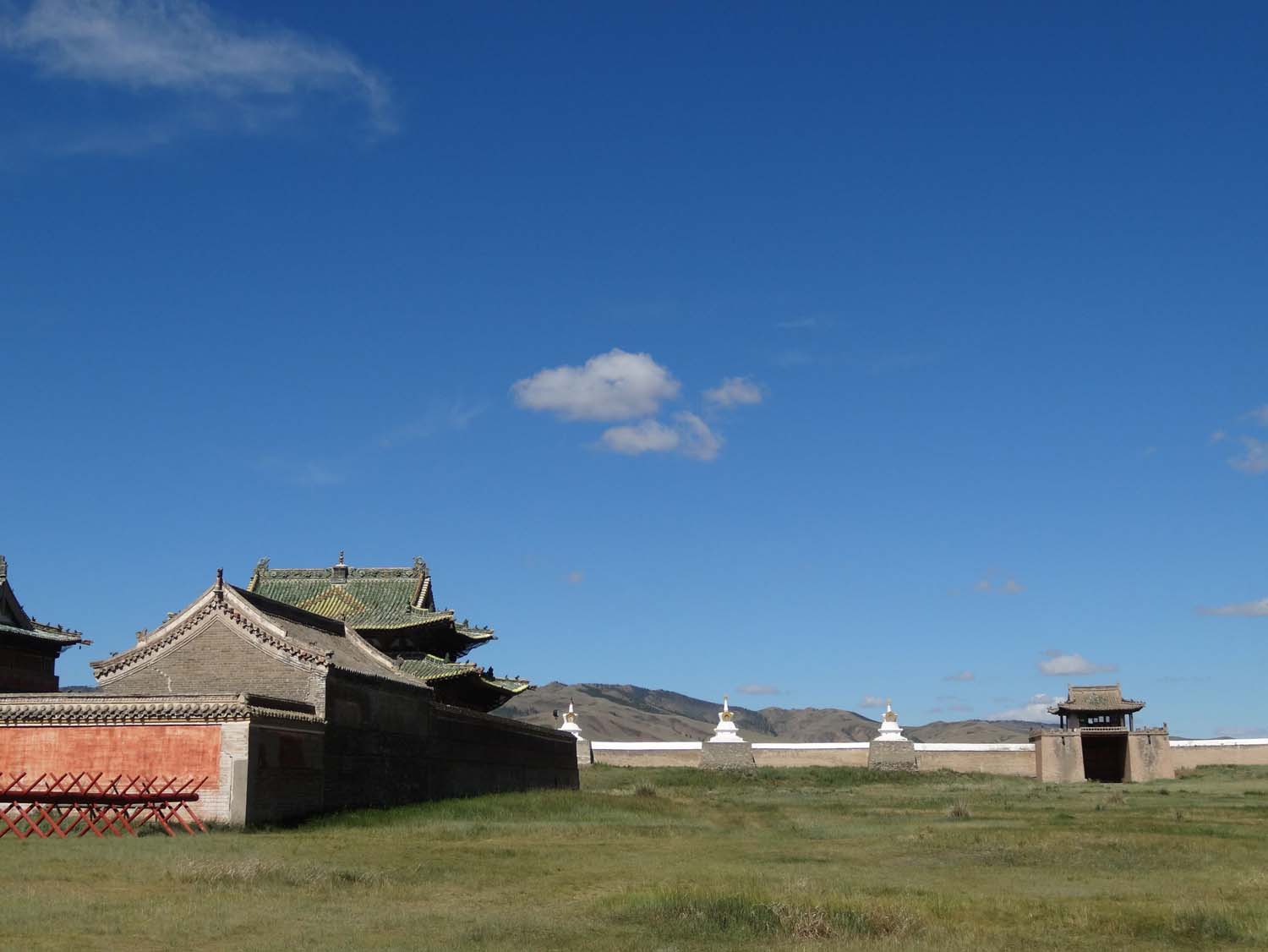 one of the 3 remaining temples inside the monastery 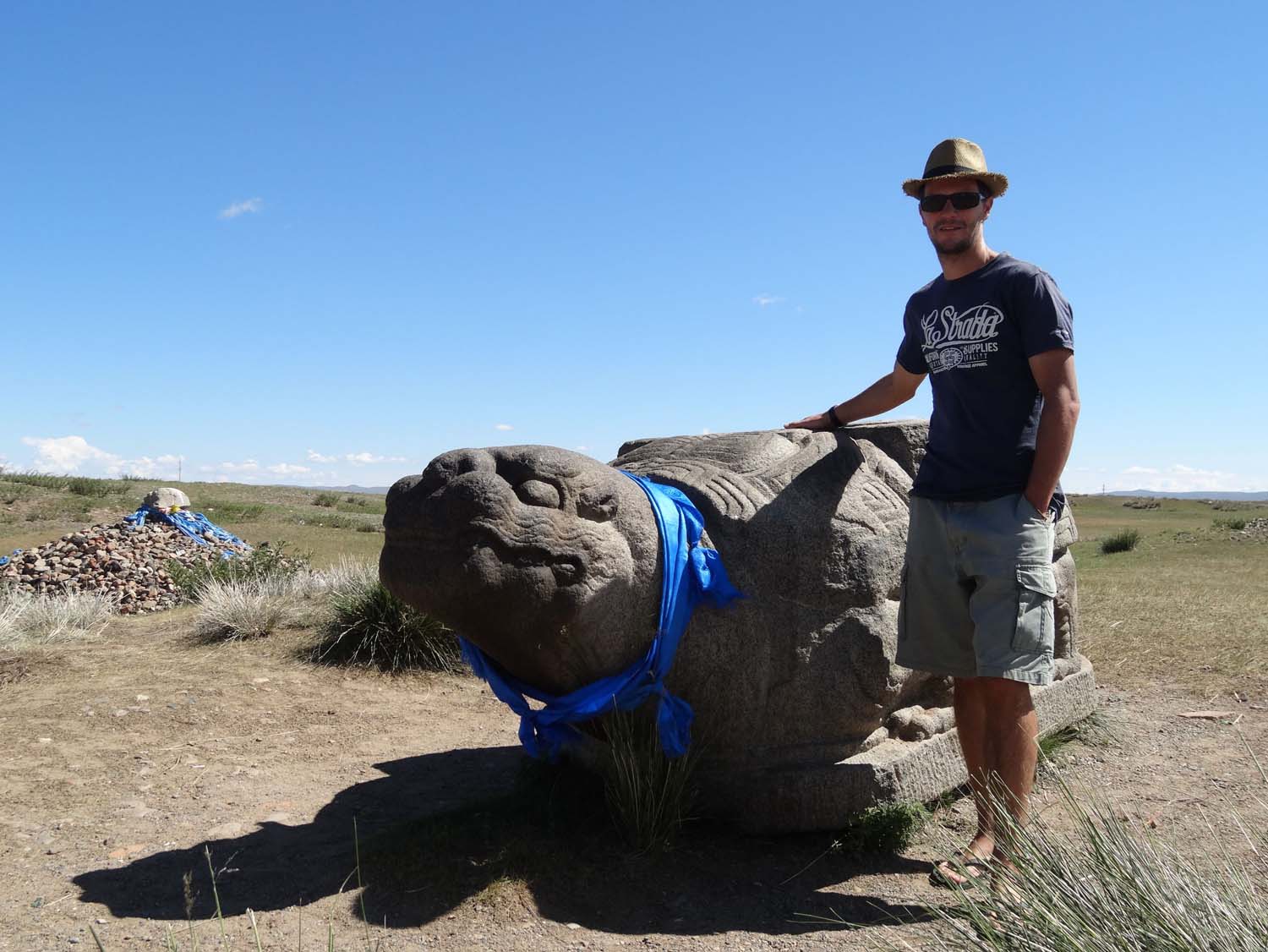 once this turtle marked one of the corners of Kharkorin, now people come to take a photo and say a prayer

From Karkhorin we drove to Tsetserleg, the long way. The beautiful, scary, bumpy, rocky, there-are-no-roads-or-tracks-here way. We left on a beautiful sunny day and enjoyed the scenery of the Orkhon Valley (yet another Unesco World Heritage Site). I went for my first run in months and loved my cold shower from the creek where we stopped for lunch. We saw lots of wildlife, found the local polo club with a deerstone in their playing field and dreaded to think what the track would look like in wet weather. Little did we know we would find out soon… 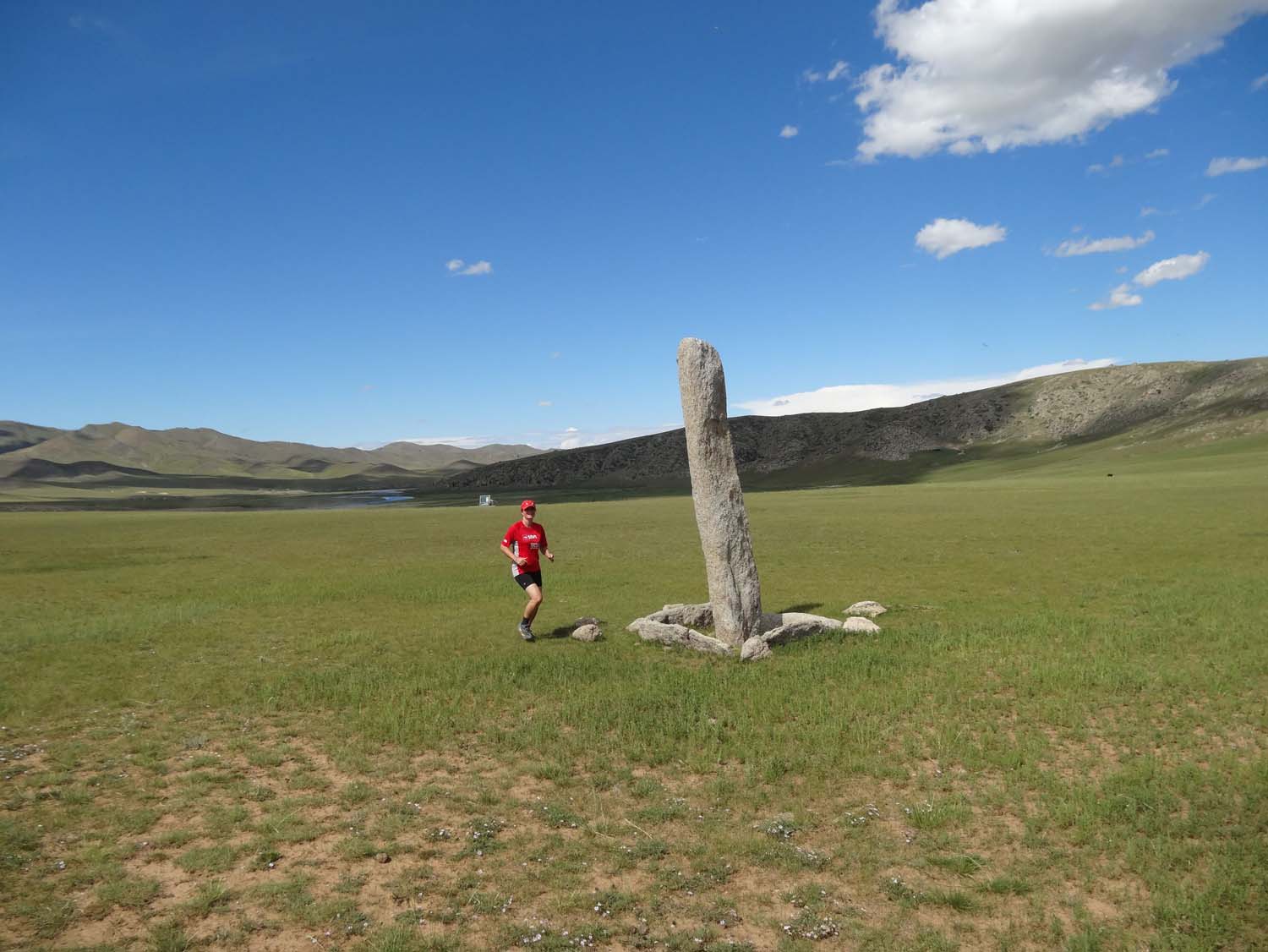 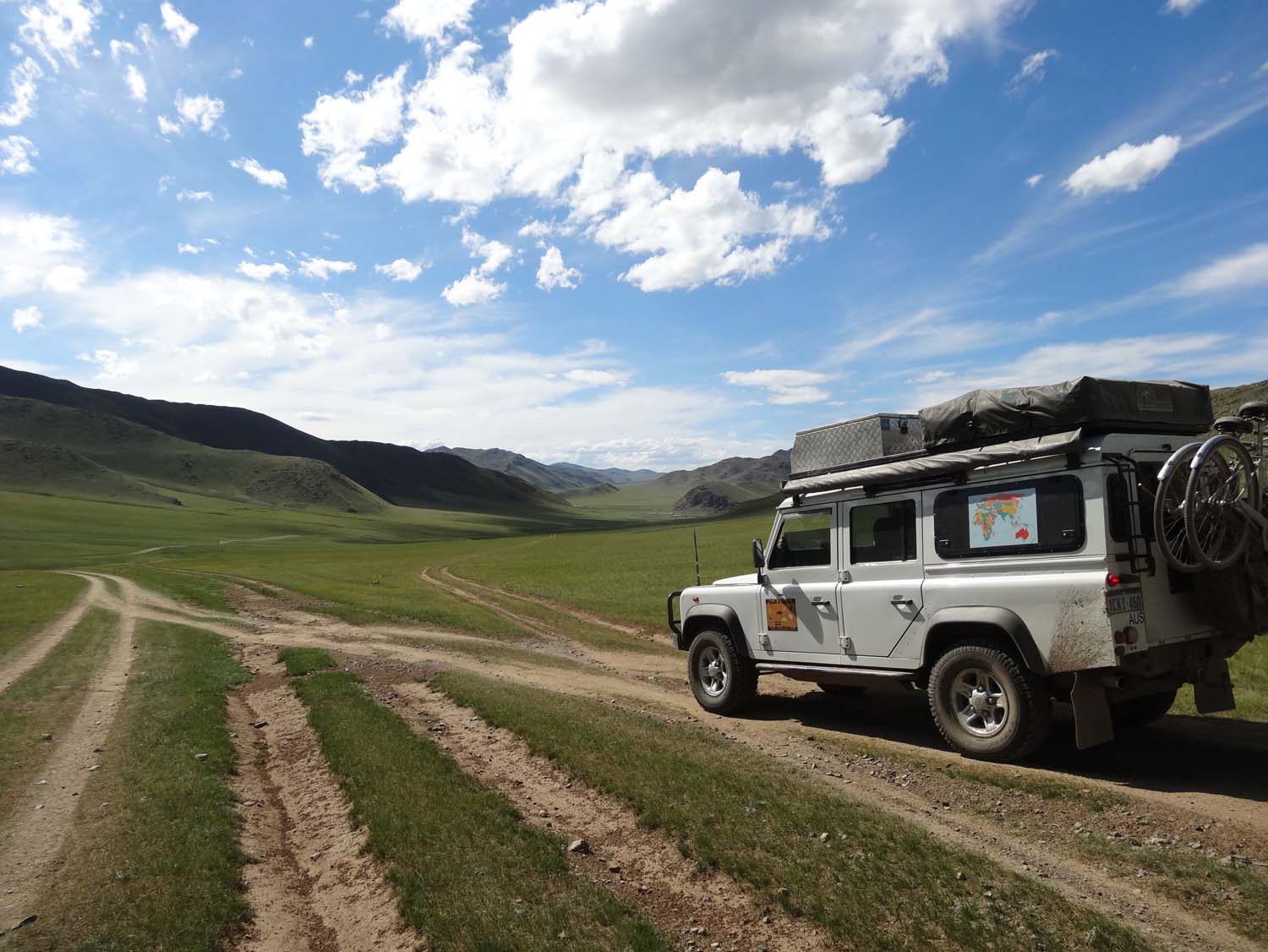 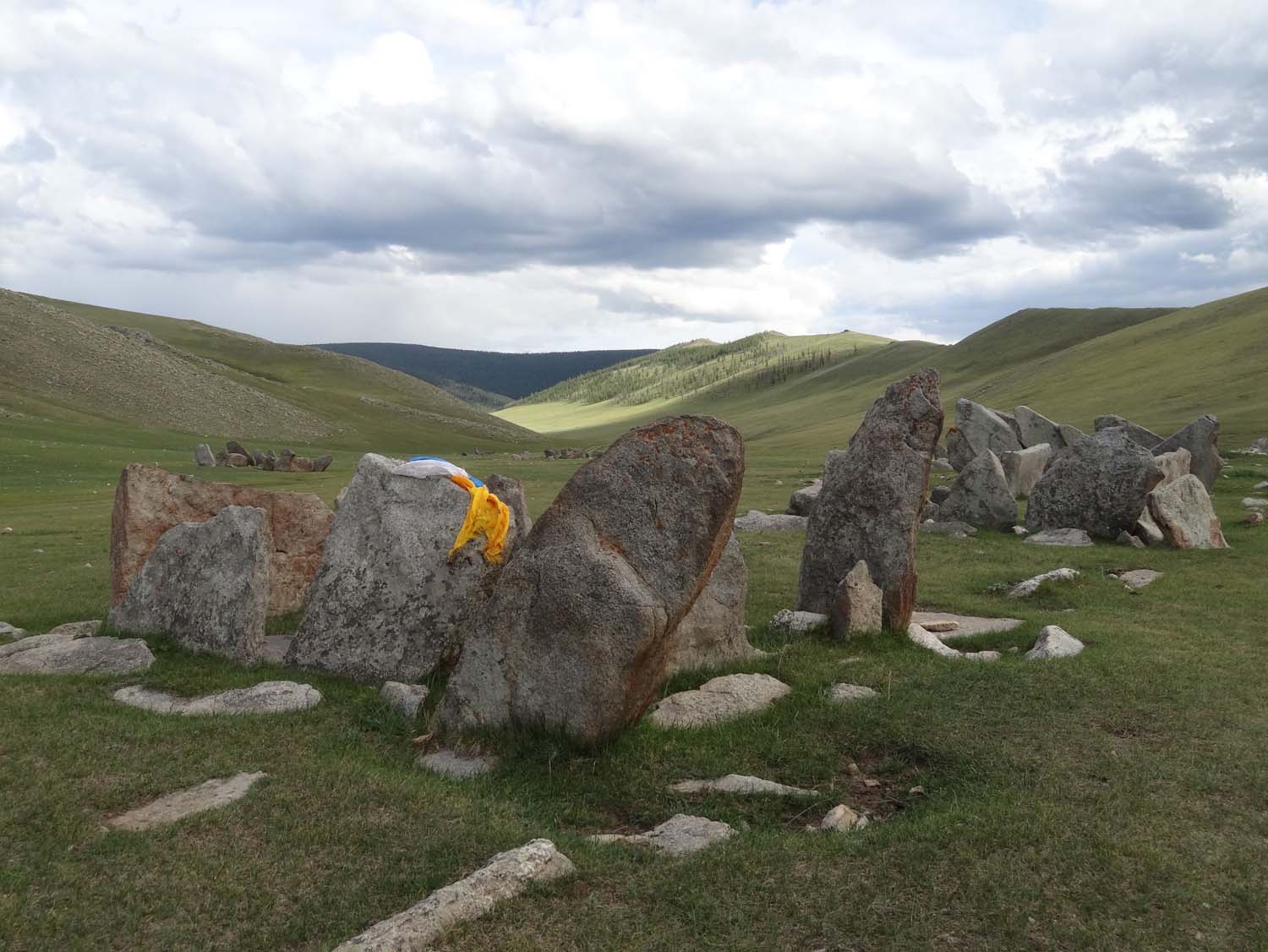 We camped near a creek in between some rocky outcrops and had a few visits from some locals. Some on horses, some on their motorbikes. Even the 2 dogs from the nearest ger came to say hello, but never barked at us once. They did bark at everybody else who would drive or walk near. After a beautiful evening we went to bed, to wake up to the sound of rain on our tent. 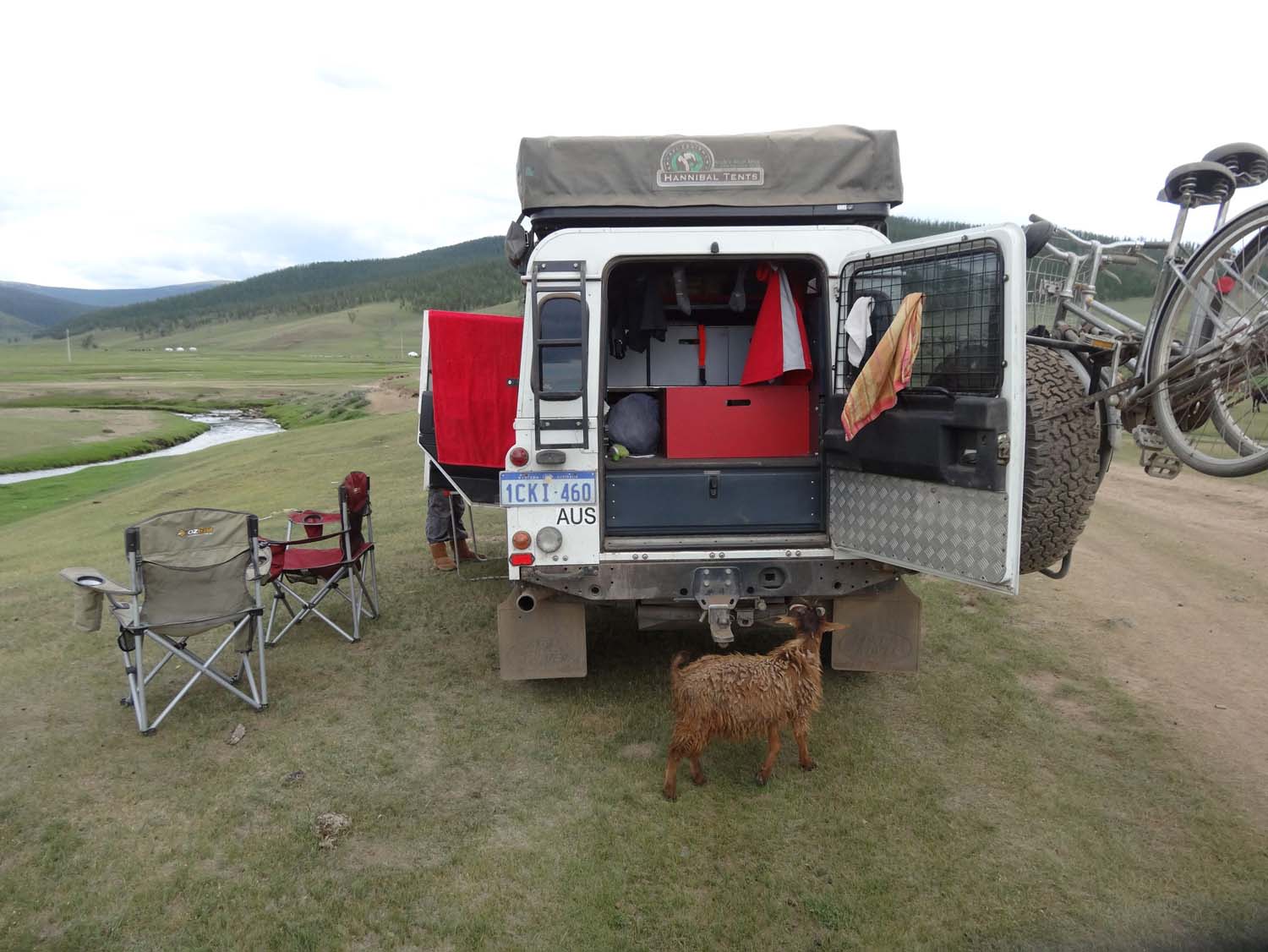 some of the locals were quite interested in Lara

A bit worried we got up later than usual, wondering how we would fare on the now muddy track. In places it is very steep, very potholed and – most worryingly – very angled. Now it would also be muddy and slippery. But Lara was fine, we slowly made progress towards the waterfall which sits in the middle of a huge flat plain, having carved an impressive canyon out of the rocky ground. After many hours of driving we enjoyed a walk in the drizzle to the bottom of the waterfall. 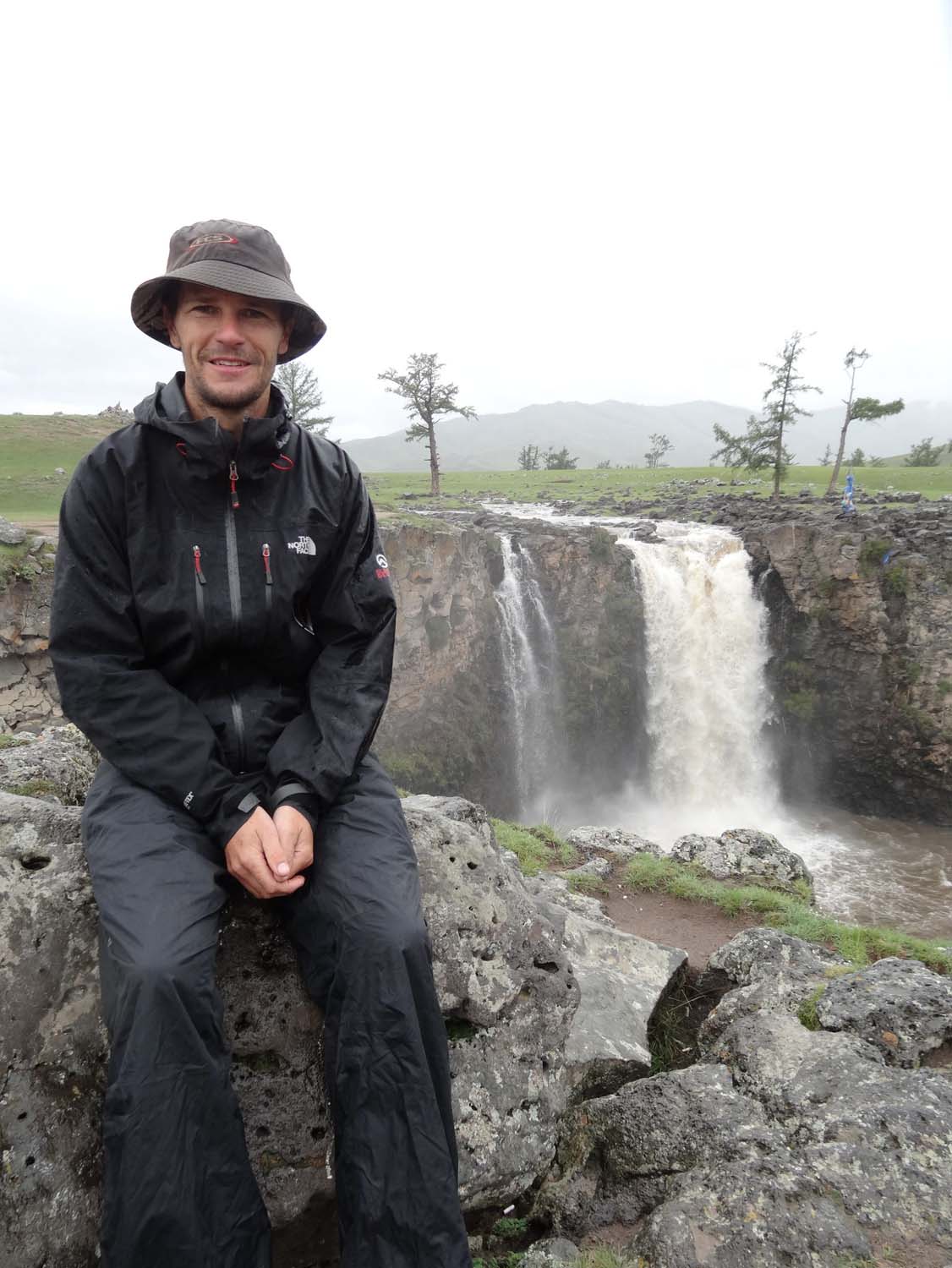 a waterfall in the middle of a flat, wide open plain

Now we had to find the way to Tsetserleg from here. In theory there is a track that goes straight north from the waterfall, it shows on the map and many locals indicate it is possible to drive there. But we had to cross the river first… Somebody had told us we just had to follow the track further and it would take us straight there. We crossed the river for the first time and talked (mimed) with the locals living next to the river, but from their drawings and hand signals we understood we would have to cross the same river 12 times, sometimes up to waist high. Drive over some seriously steep passes, and down again, over some pretty non-existent tracks to get there. They explained there was a bridge about 30km back down the valley where we could cross and then we wouldn’t have to go over passes that were that steep and the river wouldn’t cause any problems that way either. 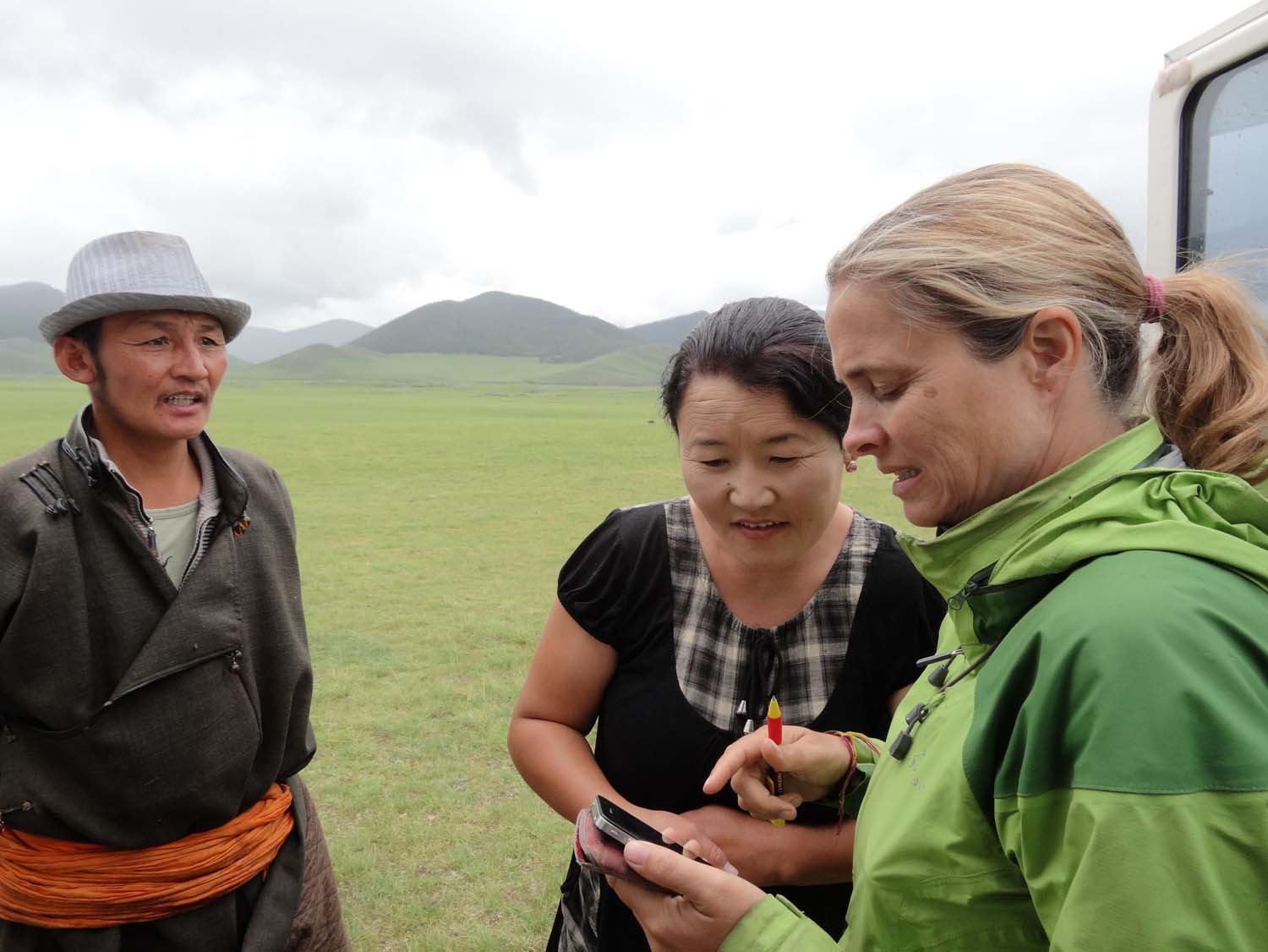 trying to get directions from the locals

Off we went in search of this bridge. We had just come from that direction and had not seen any bridge, but there were more tracks down the valley and by sticking closer to the river we eventually found the bridge and some tourists in a Russian van. We flagged them down to ask their guide and driver for directions. “Very simple”, they said. Follow this track, there is only one junction in about 6km where you have to turn left and then you just follow the main track to the hot springs (which happened to be on the way to Tsetserleg).

How wrong can a guide and a driver be? Very, very wrong. There was a junction after about 6km and we took the left turn. Not long after we realised it was the wrong way… we turned around and followed the right track. Soon we came to another junction and another, every time we had to guess (with the help of our gps) which way we would go. There are no tracks marked on the map or on the gps so we were driving on a bearing directly to the hot springs. ‘Only’ 80km from the bridge, over mountain passes, through different valleys… 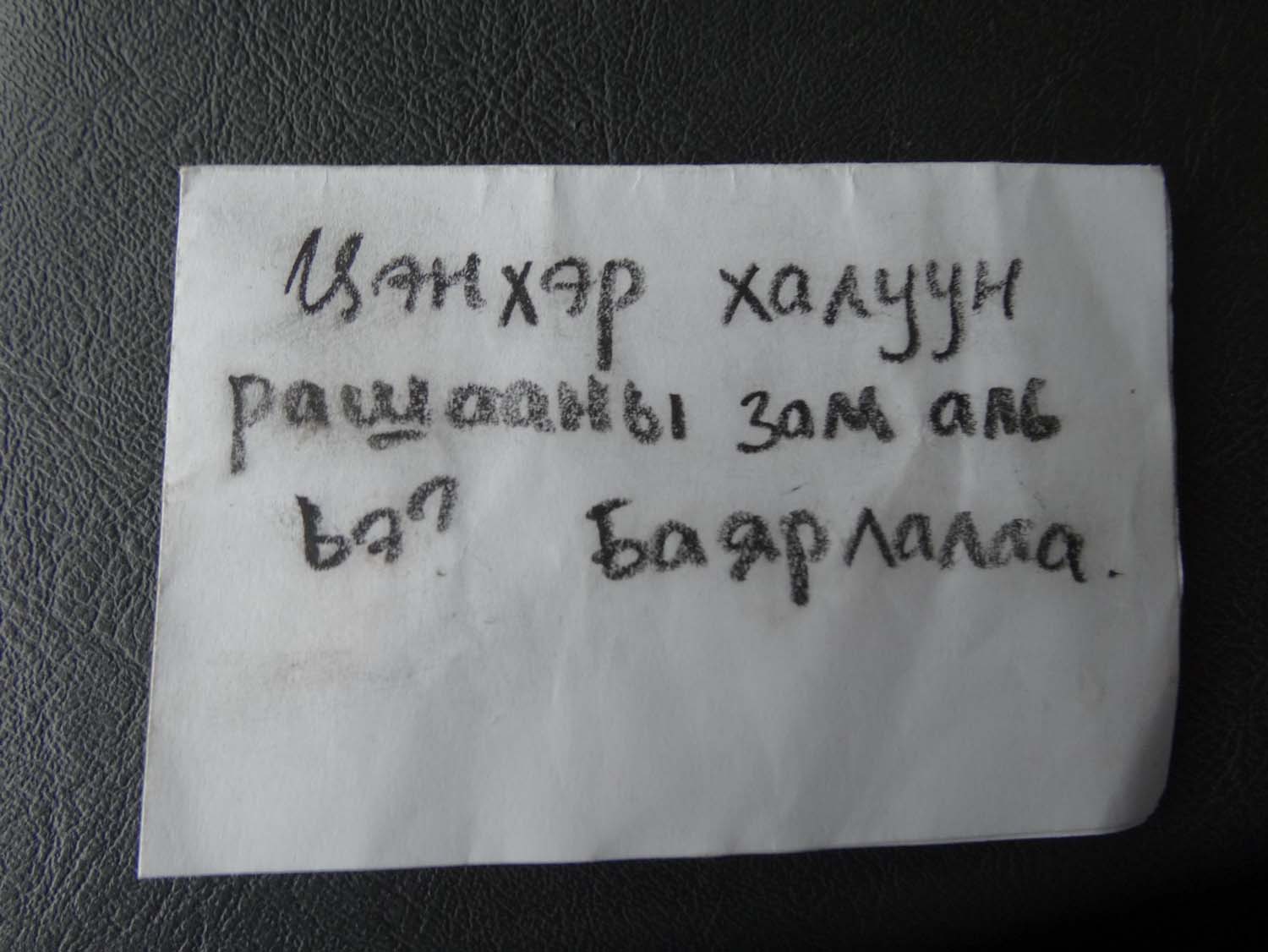 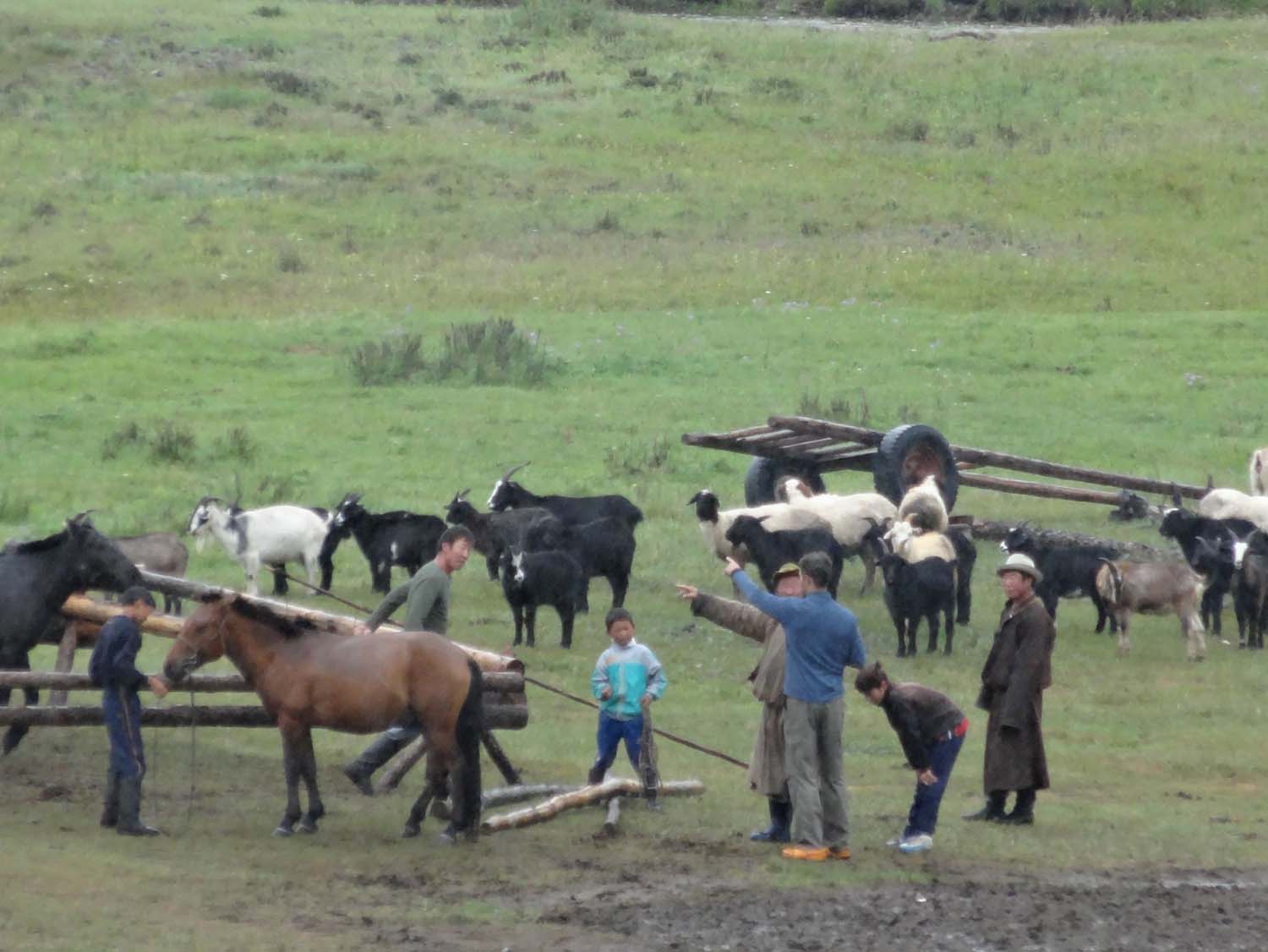 asking for directions at one of the gers

Whenever we saw somebody we asked if we were on the right track, sometimes we drove off the track to ask at a ger. We stopped to camp in the middle of nowhere. It was the most beautiful valley with wildflowers, a river, some trees and decent hills on either sides of us. Again Mongolia gave us a beautiful sunset to watch as we cooked dinner and enjoyed the views. 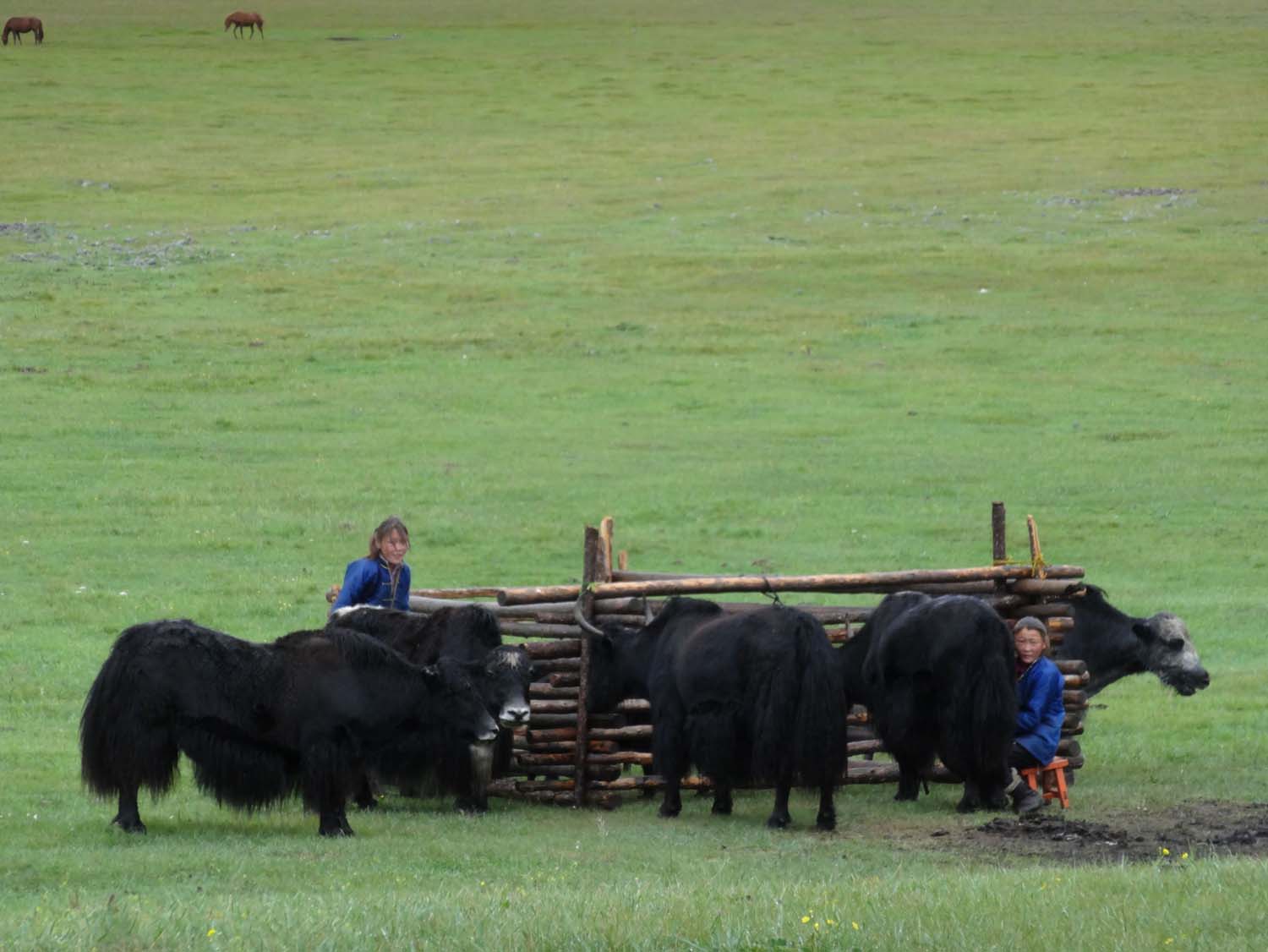 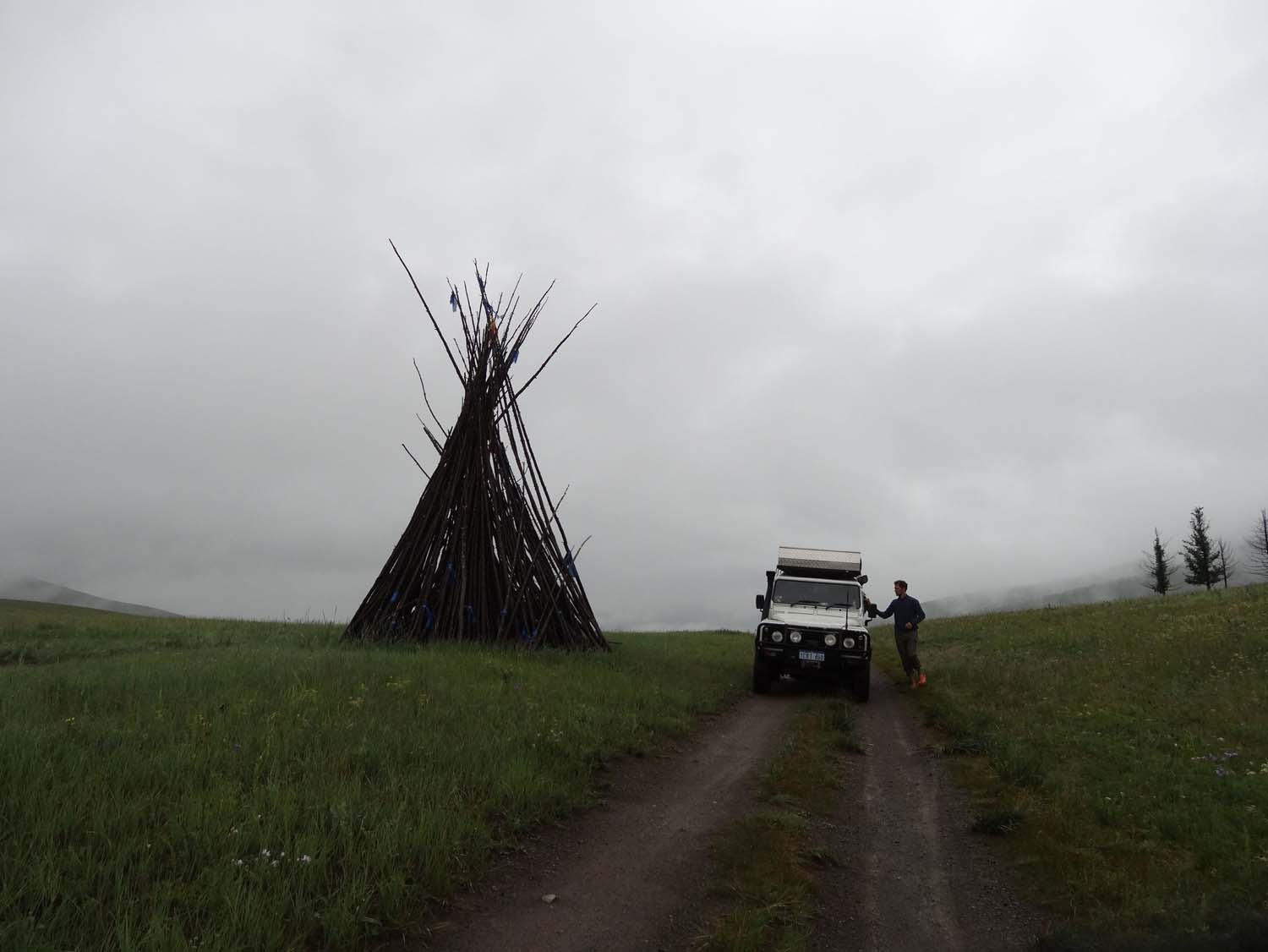 offering site in the middle of nowhere, they are usually at a pass 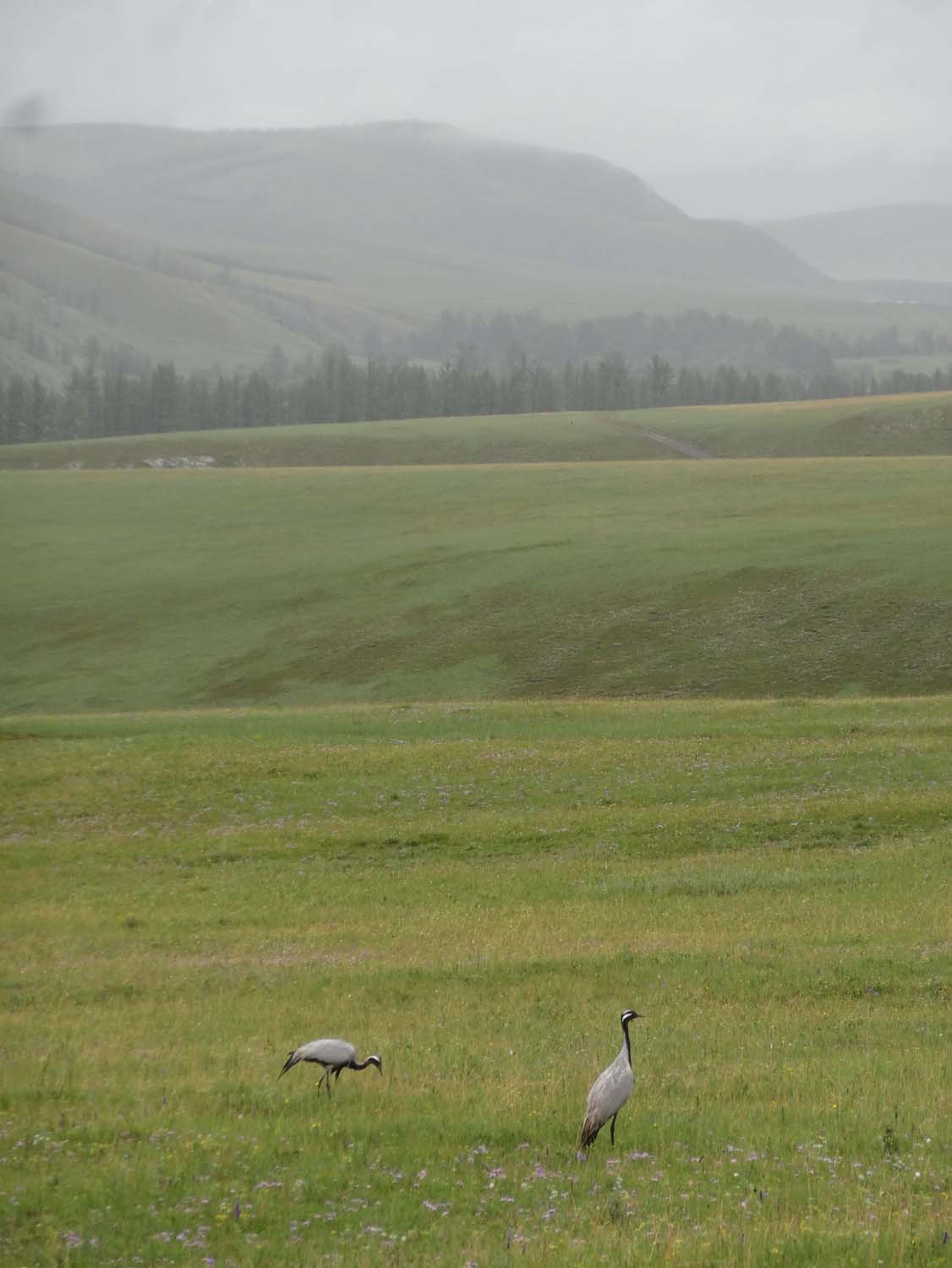 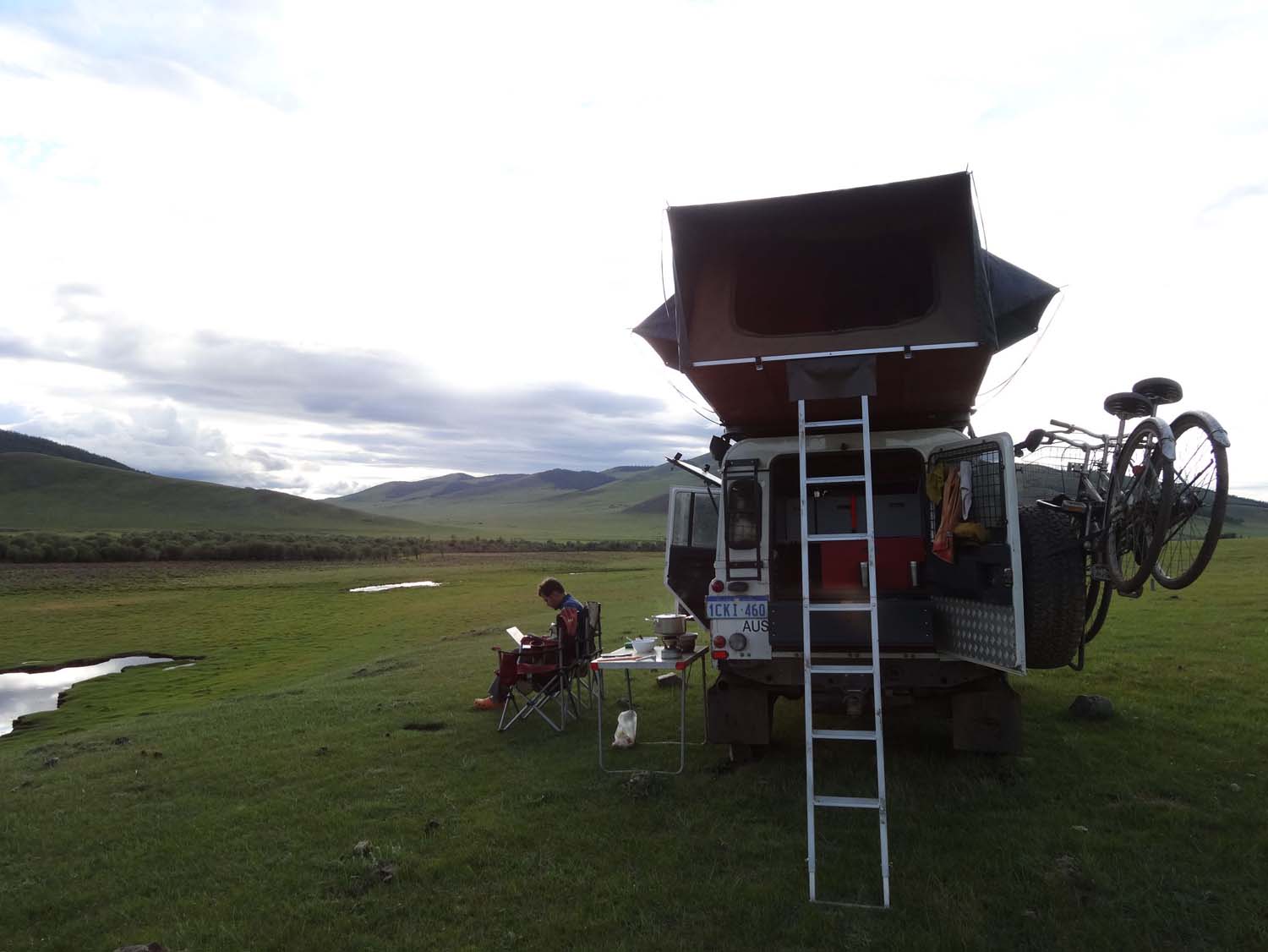 our super stunning campsite, just in the middle of nowhere

The next day (it had rained some more overnight), we slowly made some more progress on the muddy tracks. Once we found ourselves in a pine forest with millions of wildflowers mixed in with the tall grasses. The tracks were now very faint, maybe 4 or 5 cars had driven here before and we went higher and higher up the pass. It was beautiful, but we were also nervous for the descent. Wondering how slippery this grass would be and how steep. 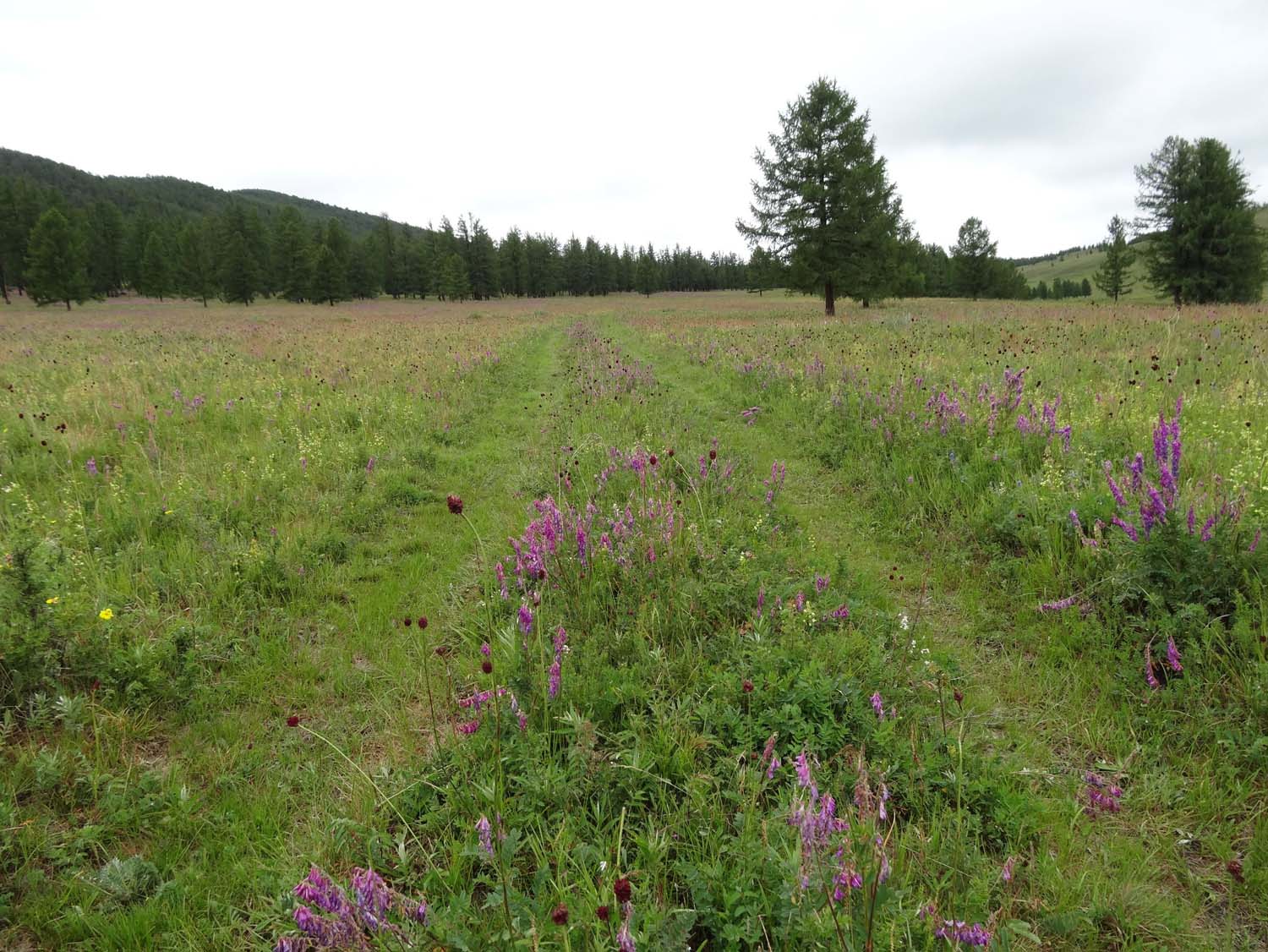 (mums, please skip the next 3 paragraphs)

Very steep and very slippery. In fact, the ABS kicked in a few times as we were sliding down the steep slope. It was trying to stop the locking of the brakes, but we were still skidding uncontrollably in the grass towards a big open gully on the right. The track bent back to the left at the start of the gully, and (pretending Lara was my mountainbike) I released the brakes so we could drive her around the bend, avoiding the big abyss on our right… it worked. Adrenaline was definitely pumping and we could breathe again!

We had another very scary moment when Jon was driving. I had just jumped out to start my run and was wondering how she would go down a particularly muddy slope in the middle of a pine forest (again!) with some gutters on the right when Jon hooted. Time for me to run back and find a way around the track as she was just hopelessly sliding into the gutter time and time again, but after a right turn this small. harmless gutter turned into a massive ditch which would certainly eat up Lara. 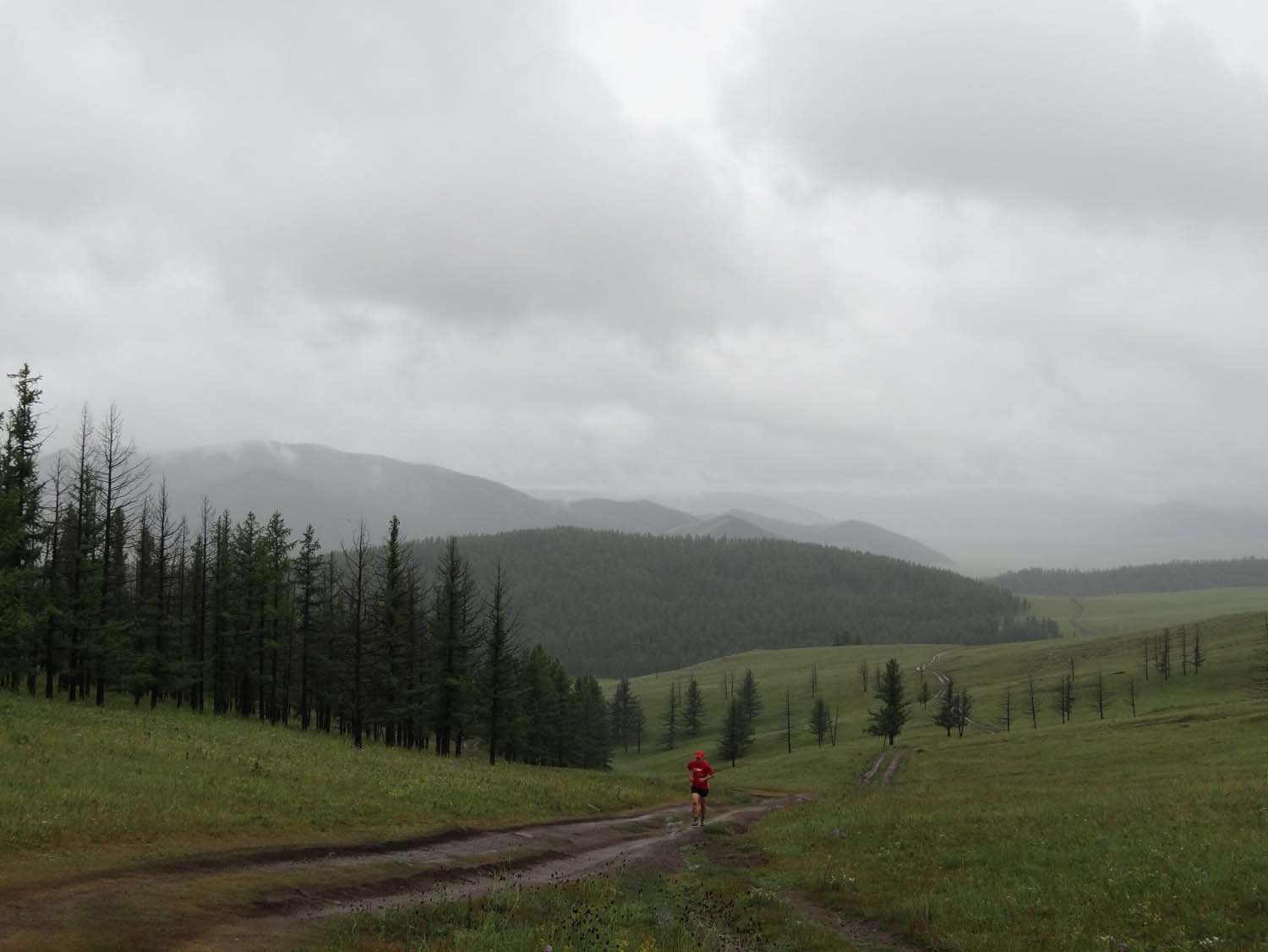 running in the middle of nowhere

I managed to find a way around it, scouting a route on foot and then running back to tell Jon which way to go. Holding back branches of big pine trees as we went along, slowly but surely further down. We were only another 5km or so from the hot springs! It was nerve wrecking again, but luckily soon the muddy slope became a more sandy slope and Lara found her grip, happily cruising down to the last valley with the hot springs.

(mums, you can start reading from here again)

We arrived at the hot springs and found a nice one with some rocky pools and a backdrop of pine trees. We had a lovely soak and well-deserved hot shower (for the first time in weeks) before cruising up the last valley towards Tsetserleg. On the way out we saw some locals in normal 2WD cars in this muddy and slippery valley. Only in Mongolia! 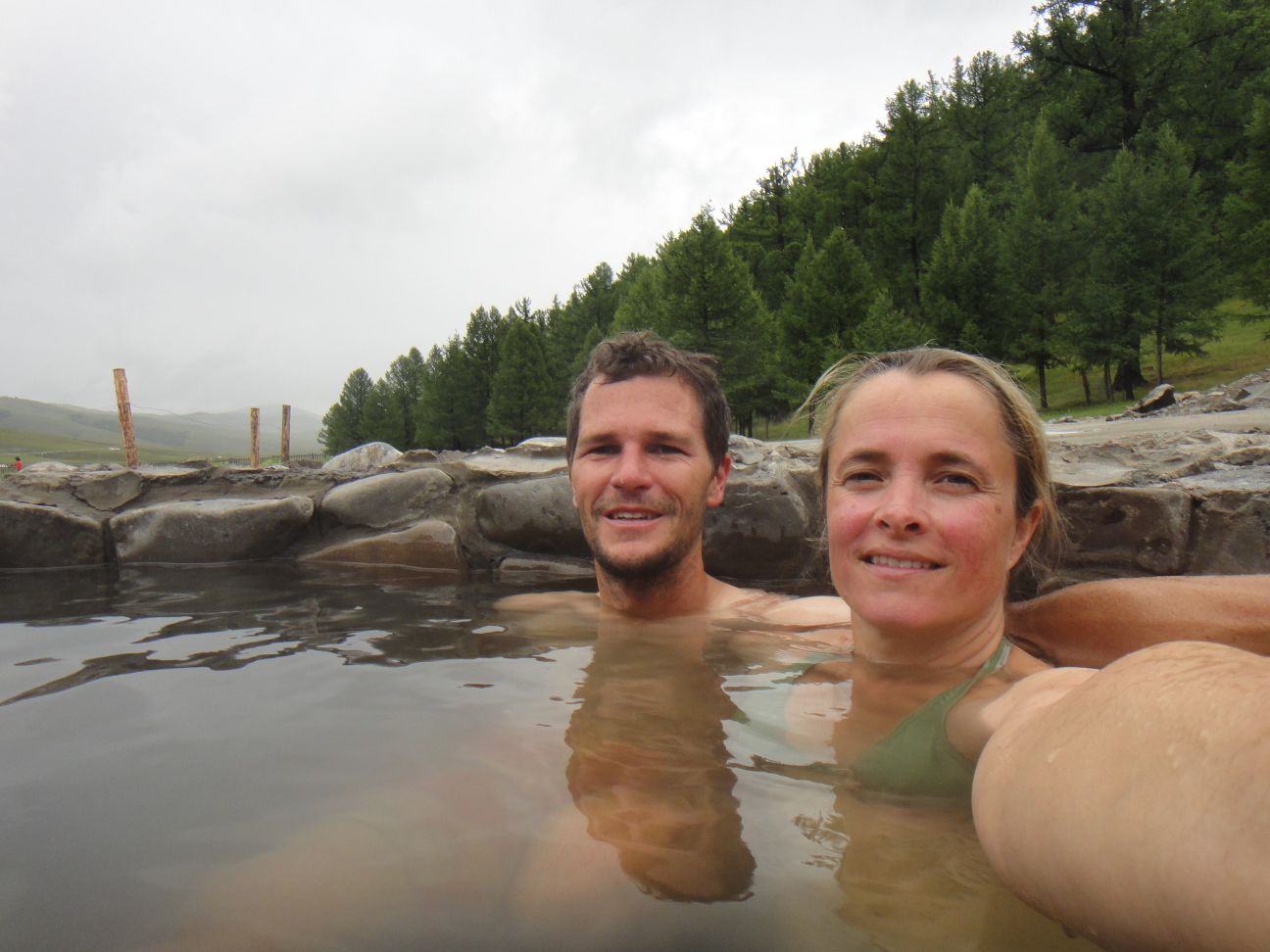 We washed Lara in the river near town and drove on to the hostel. Our first paid accommodation in weeks as we had to do some laundry and we wanted to use the wifi. Jude spent a few hours updating the blog and writing emails, Jon did a gearbox oil change and some shopping. They had a great bakery so we bought some fresh wholemeal loafs for the next couple of days. Yumm! 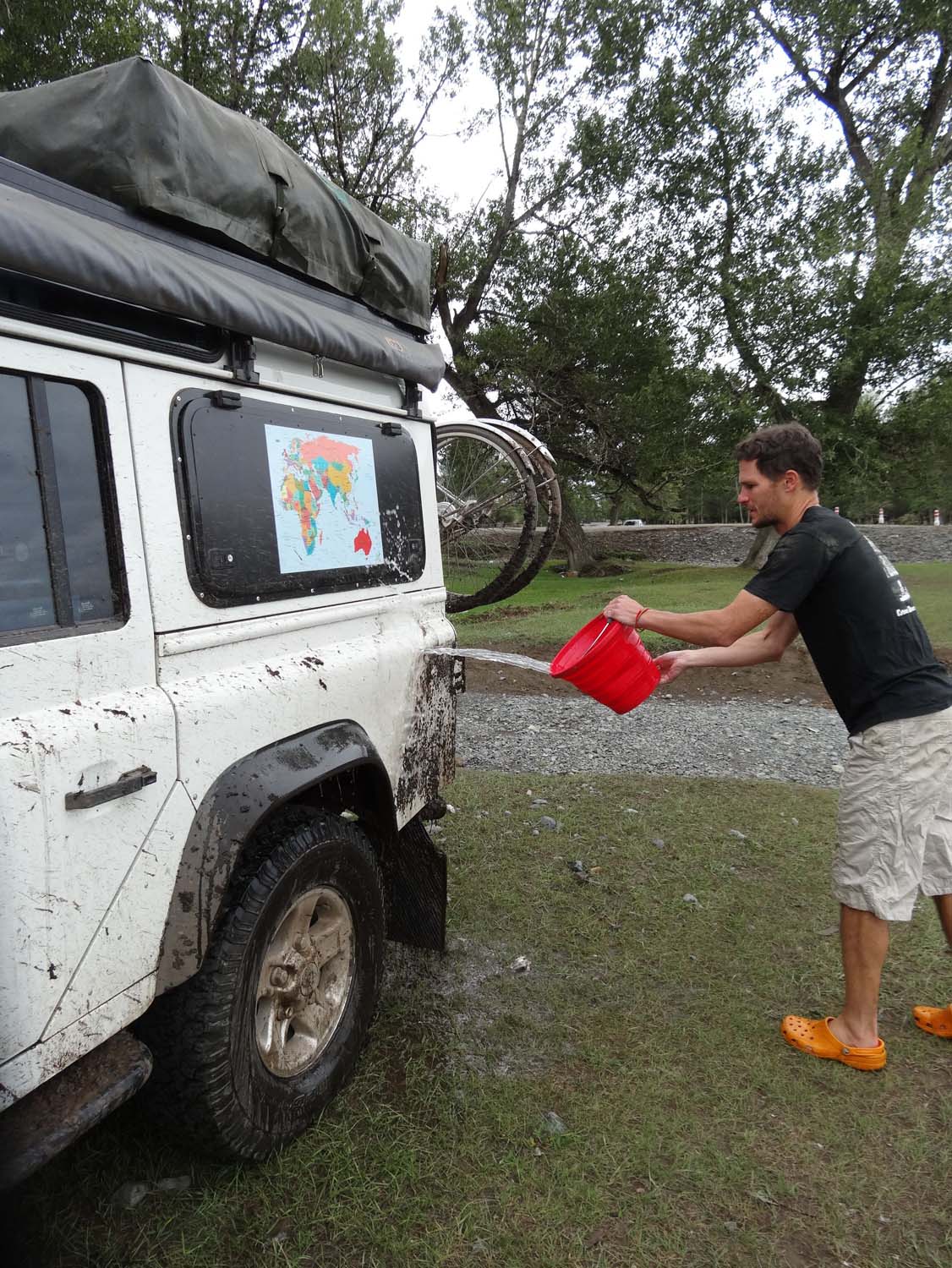 much-needed wash, we use the local rivers to give Lara a wash when we can 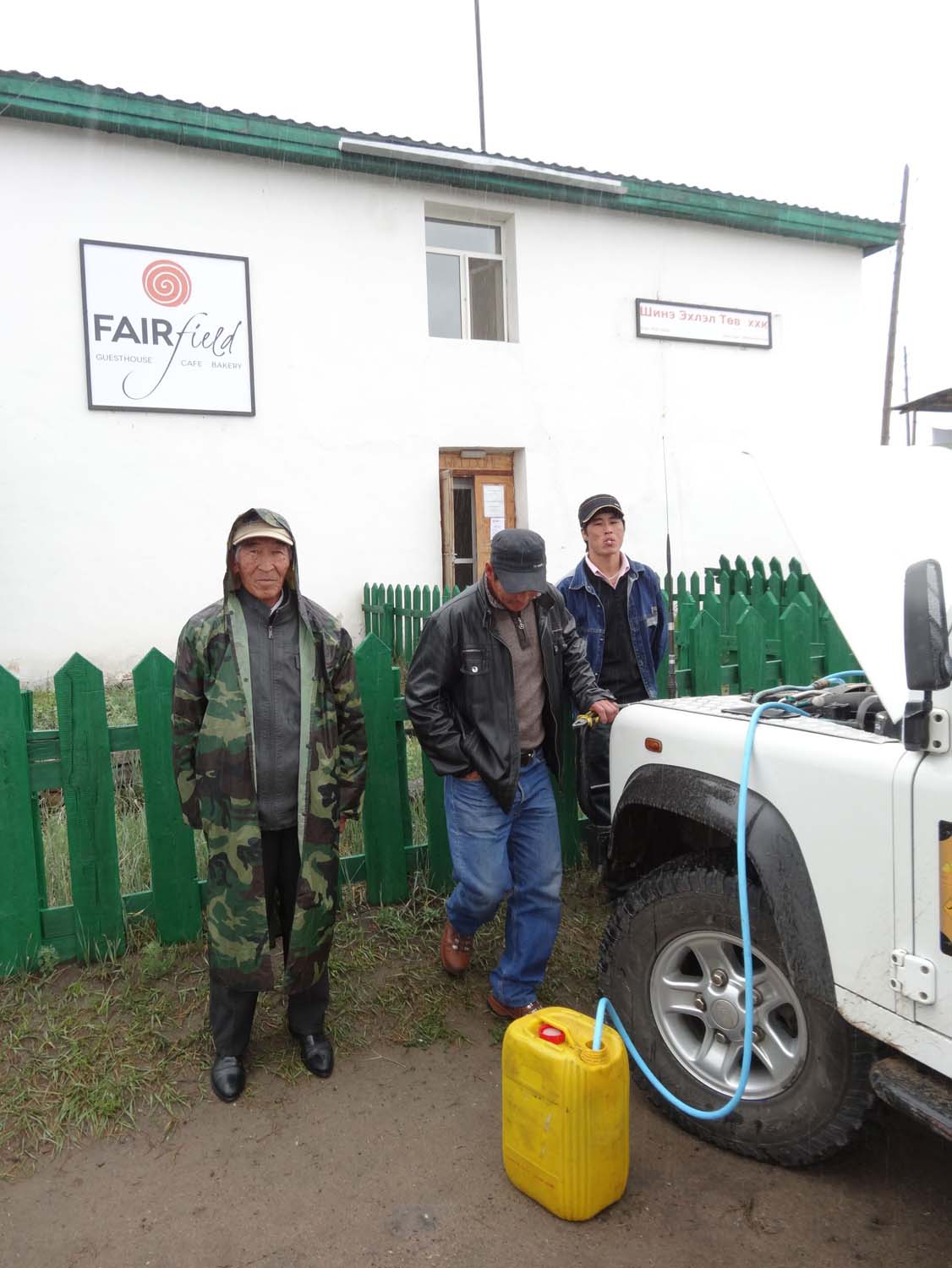 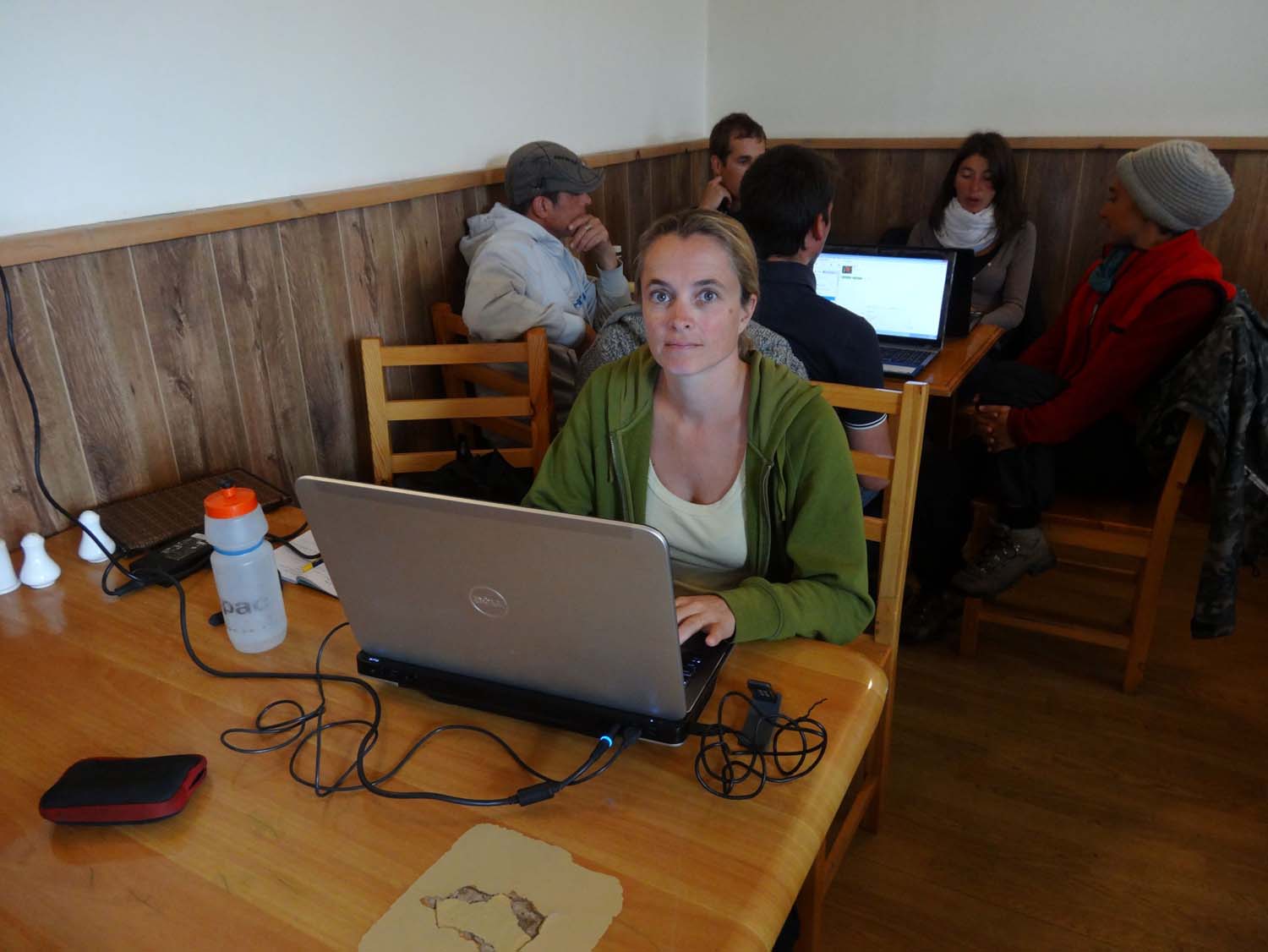