The Rift Valley Odyssey – it is not a race, but a chance to experience some of Kenya’s amazing scenery whilst riding a mountain bike. The real deal takes participants on a 5-day journey through the Rift Valley, but there is also an option to ride the last 3 days only, an option we happily took as even the 3 days would see us ride more than 250km with around 4000m of altitude gain… 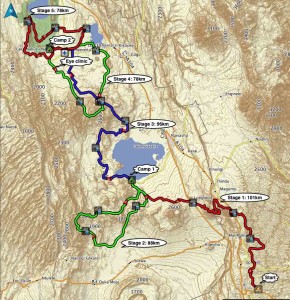 A tough day with big climbs into the clouds. Get off the mountain before it rains at 15:00.

The stage commences with an easy ride through the magnificent private conservancies of Oserengoni Wildlife Sanctuary, Kongoni Game Valley, Mundui Sanctuary and Crater Lake Conservancy, before riding across a network of small farms to waterpoint 1. After that the going is tough and scenic, ascending two massive climbs up the western saddle of Mount Eburru to waterpoint 2. From this high point it’s mostly downhill to waterpoint 3 and eventually race camp, nestled within Soysambu Conservancy, adjacent to Lake Nakuru National Park. The ascent and descent of Mt Eburru is through rich agricultural land, which was deforested from Mount Eburru during the last 20 years.

The start line of the (3-day version) RVO is at Camp Carnelly’s on the south side of Lake Naivasha and that day ends at the Soysambu Conservancy. We drove up from Nairobi in convoy with Farook and Patrick as we were staying at Farook’s place in Naivasha the night before the race. He has an amazing place set up with some friends on a huge block of land, with views to Longonot and Lake Naivasha. Bonus of his place was that it was only a 15 minute drive to the start the next morning.

Bernard, our driver, had driven us to Farook’s place and dropped us off at the start line. He then drove our car to the camp at the finish line that day – yes, totally making the most of having a driver here in Kenya again! 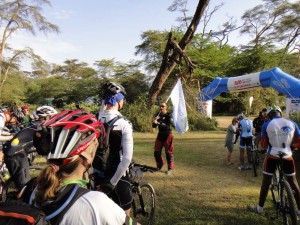 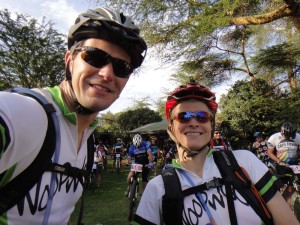 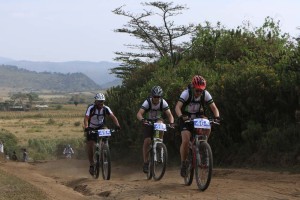 Jon and Jude on day one, Farook right behind us. 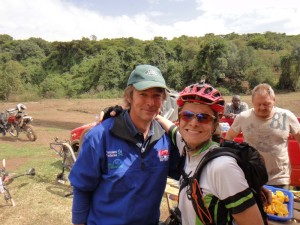 Gerald at the first waterstop 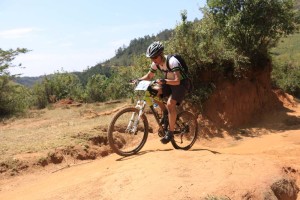 Jon riding up a hill 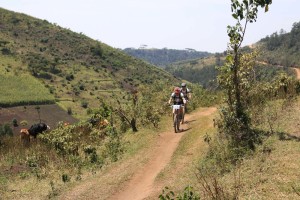 the views are stunning most of the time! 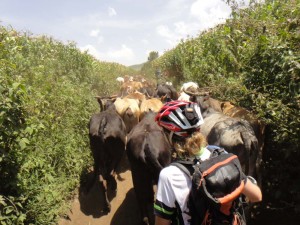 not your every day problem on a ride… 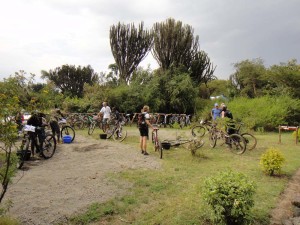 for a few 100 bob they clean your bike for you at the end of the day – winner! 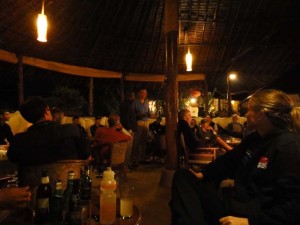 race briefing in our lodge for the next day

It was a tough day for sure, with lots of climbing, but we survived and enjoyed a massage at the end of it. The massage therapists are all visually impaired people. It is a great job opportunity for them, and as the ride also raises awareness and funds for ‘seeing is believing’, it is a perfect match with this bike ride.

A very long climb to the mountaintop! Get off the mountain before it rains at 15:00 otherwise you will be miserable.

Riders return to the high altitude of Mt Eburru, with a never-ending climb up to waterpoint 1. The next 10 km goes through the enchanting indigenous forest of Mt Eburru, a precious island ecosystem, completely encircled by threatening human activity and home to 10% of the world’s population of the critically endangered Eastern Mountain Bongo antelope. Only 12-15 Bongo survive in this remote forest. It’s a circular trip, peaking at 2600m, around the mountain summit that comprises 50 volcanic craters. A steep, non-technical descent will guarantee big grins! Regain your wits and breath at waterpoint 2 before enjoying an extremely long and fast descent into the Elementaita Badlands. The movie Tomb Raider 3 was filmed in these Badlands. A brief ride along the original Lunatic Railway alignment (lifted in 1954) leads to the rock strewn, rugged lava wasteland before waterpoint 3. The final 19 km into camp is across the Soysambu Conservancy. Enjoy the plains’ game, as race camp is still a long way across the dusty pan flats.

Some of the prominent volcanic craters that will be viewed from high above (before being ridden past) include ‘Sleeping Warrior’, ‘Horseshoe Crater’ and ‘Scout Hat Hill’. The route tracks through the middle of a volcanic crater that the local Maasai call ‘Puff Adder’ as it was once famous for the very large specimens that lived there.

The ride through the forest on top of Mt Eburru on day 2 was fantastic, and very welcoming after a hot, long climb to get there. Unfortunately we didn’t see any bongos… We both really enjoyed the badlands, but were feeling the lack of training by now. A great meal and of course another massage made us feel human again at the end of the ride. 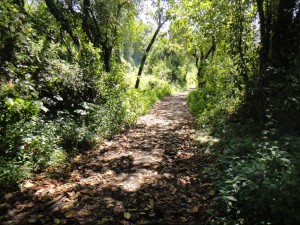 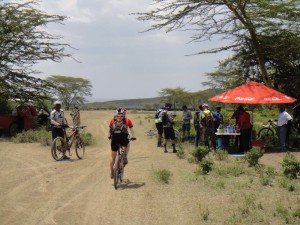 riding into another waterstop after the longest descent ever – so well organised!

The easiest day, a jolly through Lake Nakuru National Park.

The final day is the princess stage. It leaves Soysambu Conservancy for the lower slopes of the Mau Escarpment. Navigation will be challenging across a labyrinth of small farm roads before entering Lake Nakuru National Park. Riders will be batched at the gate for escort as the park is home to the Big 4 – lion, leopard, rhino and buffalo. Waterpoint 1 at 29 km is the stunning ‘Out of Africa’ viewpoint overlooking Lake Nakuru and waterpoint 2 is located at the exit. This will be wildlife viewing at its very best, keep your eyes open for rhino, buffalo and the odd lion, this might be the most enjoyable ride ever. Waterpoint 3 is on the shore of Lake Elementaita where plenty of flamingoes and pelicans can be found. It is an easy ride from here to the finish line where a cold beer awaits.

Up at the crack of dawn as the last day starts earlier to ensure everybody is back for lunch and presentations. After an enjoyable ride, narrowly avoiding wet feet at the river crossing, we arrived at the gate of Lake Nakuru NP. It was a bit confusing how long we had to wait, but after one other person arrived we were told we could continue. We thought we would be escorted from here, but we were allowed to ride on our own. It was only 4km to the top of the hill where the Out of Africa viewpoint is located. 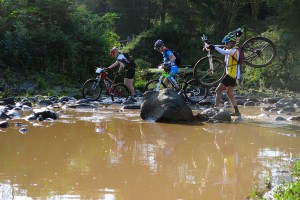 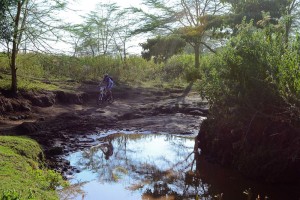 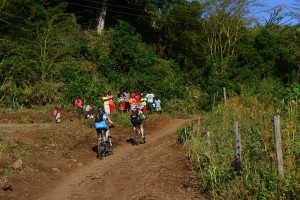 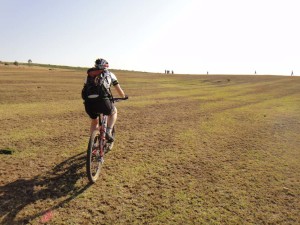 navigating using the crowd – they always stand at a turn or road junction so it is usually pretty easy to work out which direction we need to go! 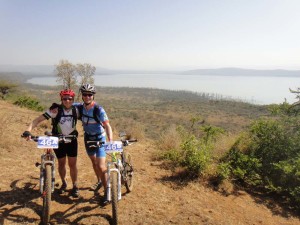 the Out of Africa lookout in Lake Nakuru NP – stunning location! 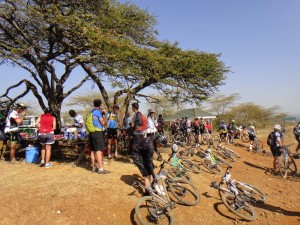 the busy waterstop at the Out of Africa lookout

When we arrived there, many people were already milling around and taking photos. We joined them and had some drinks until they announced that the first peloton was leaving. We decided to join this fast group, hoping they would go slowly through the park. We hadn’t even ridden 50m down the hill when we were all stopped. Confusion at first until we spotted the solitary buffalo wandering towards us, about 10m away… A ranger jumped out and ‘chased’ him away by walking towards him and we were off again. Exciting start!

After a few kilometers flying down the hill we spotted some giraffes who spotted us and panicked. Panicked giraffes seem to gallop parallel with whatever it is they are scared off, unless they were just racing us? It was quite comical to see them run, it almost appears to be in slow motion, but still going pretty fast! We enjoyed their company until they finally stopped and we kept going. As the terrain was now flat at best, and sometimes slightly uphill, we were struggling to keep up with the fast pace and were slowly being dropped. 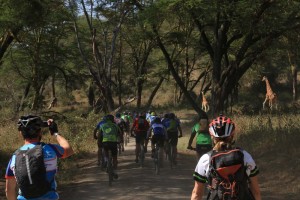 And then we saw the peloton had stopped. We thought they were waiting for us, but no, they had spotted some lions! We stopped at the back and watched the lions to our left and in front of us, until the ranger pointed out the lion right next to us… About 20m from us was a lioness chewing on some bone in the grass!!! OMG WOW. There was a lioness less than 20m away from us and we were standing there with our mountain bikes. The only protection we had was a helmet… It was an amazing moment, very exciting and totally awesome. 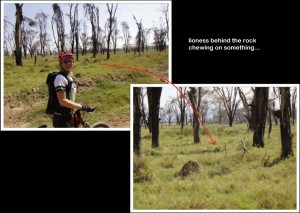 After a while the peloton continued on its way and at first we tried to keep up, but soon had to admit they were just too fast and we found ourselves riding alone through the park. Alone with all the lions, buffalo, rhinos and leopards… At first we thought surely a ranger would stay with us, but no, we were on our own! Occasionally one of the motor bike riders would wait for us and make sure we were ok before he would zoom off again. But that was it, we were on our own. We actually quite enjoyed the solo ride and continued to look for wildlife until the exit. We spotted heaps of wildlife, but nothing as exciting as that pride of 13 (!) lions or the buffalo right next to us. 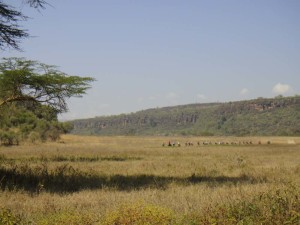 the peloton disappearing into the distance in Lake Nakuru NP 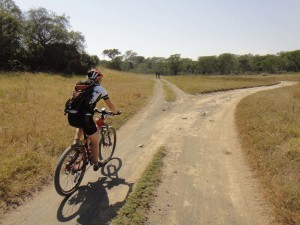 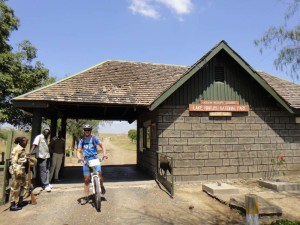 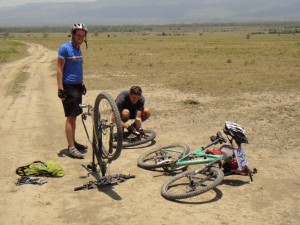 this is what happens a lot to people not riding tubeless tyres in Kenya!

The rest of the ride was easy, lucky as we were pretty tired by now. We enjoyed the ride to Lake Elementaita where we spotted some pelicans and flamingos and were very happy it was mostly downhill or flat to the finish line from there, although our bums would have liked a smoother ride in places… 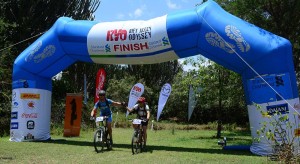 finishing after 3 days of beautiful riding!

It was a fantastic experience, definitely one to repeat next year. The dates have already been set (very unusual for Kenyan events). Put them in your diary if you want to ride through some amazing African scenery!

You can find more information on the Rift Valley Odyssey website – the dates for 2016 are 20-24 September.