When asking around we were told the drive to Mikumi NP is around 4 hours. Perfect for a weekend we thought. We filled in the required journey management plan for Jon’s work, a mere 10-page document (not kidding!), and set our alarms for an early departure. The night before we had already loaded the car with our camping gear, so in the morning we just had to grab the things from the fridge and we were off.

When you leave at 6am you are supposed to get a clear run out of town and despite it being quite busy we made good progress. Unfortunately even after leaving the city in that direction you never really get up to speed. Village after village is strung along the highway and every little house gets a 50-zone, and most have a cop with a speed gun. The few sections where you were allowed to drive 100 you often get stuck behind a truck and a no-overtaking line, the only sections where you can overtake were usually the downhills when trucks also manage to get up to a reasonable speed…

One speeding ticket later (for Jude) and 30,000 Tzs poorer we arrived at the Kikumi NP sign. But that doesn’t mean you are there yet though. It’s another hour or so to drive to the entrance gate as the main highway cuts right through the middle of Mikumi NP. This shouldn’t be a problem if people would obey the speed limits, but they don’t. At night they race down this section (speed guns don’t work at night) killing any animal that might cross from one side to the other, including elephants…. 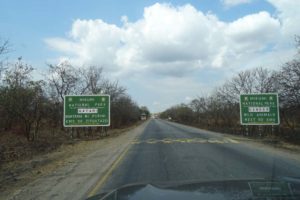 entering Mikumi NP, this highway cuts right through the middle of the national park and many animals are killed each night by speeding trucks 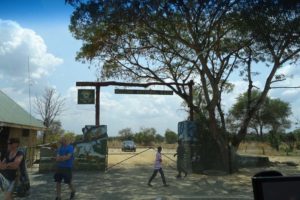 actual entrance of Mikumi NP where you pay your entry fees

But we were cruising at the compulsory 50km / hr until we finally arrived at the gate around lunchtime. We paid our entry fee and drove in, our first aim was to find a good lunch spot. That was easy. We had a rough mud map of the park and went to the nearest waterhole where we parked the car and enjoyed the view of zebras, elephants and loads of birds in the area as we made and ate our sandwiches. 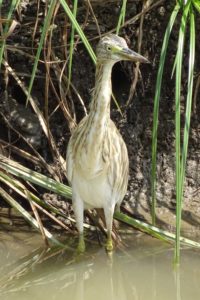 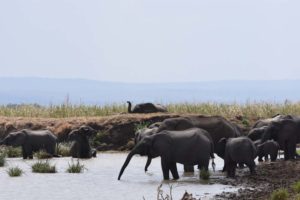 elephants come from all directions to drink during our lunch stop 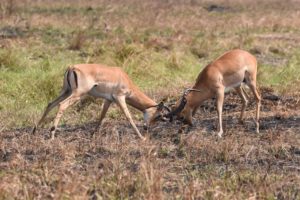 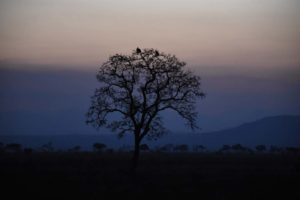 vultures in a tree

The rest of the afternoon we cruised around, exploring more and more of this new national park for us, stretching our legs at the hippo pool and checking out the public camp sites for our camping options later that night. We decided to camp at the public camp site near hippo pools and found a private area where we watched a spectacular sunset before cooking dinner and watching the stars come out one by one. Far from any major light pollution, the sky is magic around here. We went for a short walk at dark as we heard some rustling a few times and spotted a civet quite far away, but with the characteristic walk it is easy to recognise. 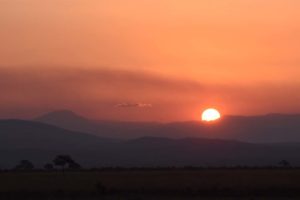 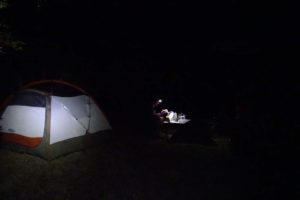 Jon cooking dinner in our campsite at Mikumi NP, we stayed at the public campsite near the hippo pools

We had a peaceful night with a bright moon shining down on us later in the evening. As usual we got up early and started our morning drive before breakfast. We had enjoyed the waterhole the day before so we went back again to see if we would be lucky there. Not long after we arrived a beautiful male lion strolled in. It appeared he was going for a drink, but then he decided to walk straight over to where we were. And, really nearby, he pulled up his upper lip in a typical flehmen grimace. There must have been a lioness there not long before we arrived and he was picking up her scent, checking if she was ready for mating. It was a beautiful sight, right in front of us in the early morning light. 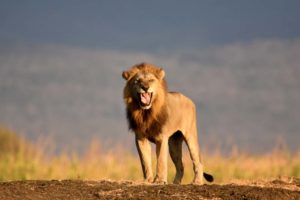 a flehmen grimace from a male lion before he walks down to the water for a drink. He is sniffing in the air to determine if a female is ready to mate. Maybe the female has just left?

Soon afterwards we headed for a picnic site as we were getting hungry. It was located underneath a beautiful baobab tree and we enjoyed looking at the many birds that came to the tree whilst having our breakfast. 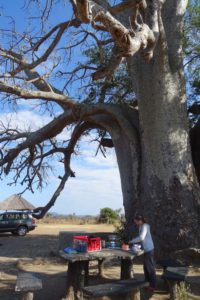 Jude preparing lunch underneath this magnificent baobab full of birds 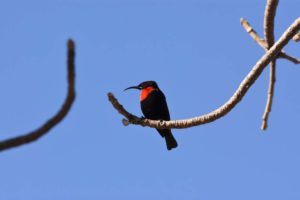 a male scarlet-chested sunbird in the baobab 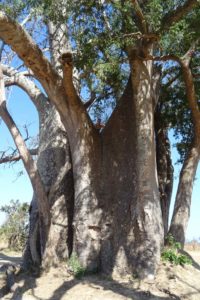 Jude in the baobab, this tree is huge!

After our late breakfast we drove north, wanting to leave from the northern gate instead of the main gate. You can’t enter there, but you can exit. It was a slow drive, enjoying our time in Mikumi and by lunchtime we were checking out the lodge next to the northern gate. As we had a long drive back we had lunch on the track back to the main road.

The drive back took a similar time and we arrived just before dark in Dar, with yet another speeding ticket, this time for Jon. We enjoyed Mikumi and think the park is definitely worth the long drive, but next time we’ll probably go for 3 days. 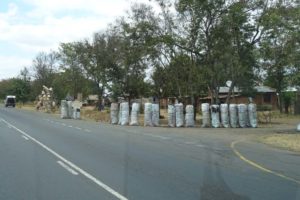 unfortunately also here in Tanzania we see a lot of charcoal for sale by the side of the road. This is illegal, but police turn a blind eye when paid the right amount (either daily or weekly)