Awesome weekend! Great course, great to be out there again! Team Dysphasiacs had a ball! We even had gorgeous sunshine and warm evenings – very nice!

For some reason I arrived at the international airport in Sydney and had to wait a long time for my bags ;-( but after that it was all easy. I drove up to Wangi Wangi (pronounced the same as Dodgy Dodgy), set up camp and went shopping. Then I had to find the airport near Newcastle to pick up Marcus, which I assumed would be signposted on my way there… NOT! With my tourist map I managed to find Williamstown and as I walked into the building, Marcus appeared looking like a donkey with work and race gear!

We registered and took our maps to the local hotel for a pretty good meal and a table with light for some route planning. We also ordered a pizza for during the race – oh that was a brilliant move! Then back to the campsite where we finished packing our boxes and off to bed for a few hours sleep. 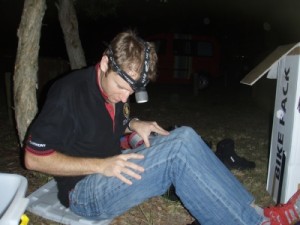 preparations the night before the race

The next day we had a very civilised start time for the first leg in the kayaks: 9AM so we had plenty of time to get ready. Unfortunately the wind was picking up and of course most of the paddle we had to paddle directly into it, causing many tears as we tried to keep the salt out of our eyes… We did very well and continued strong on the bikes. A cruel 4km steep uphill slowed us down a bit, but we made it without stopping! 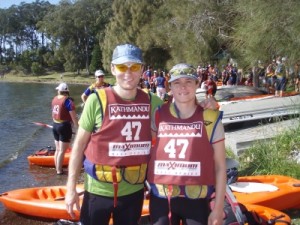 The ride was followed by a hiking leg which was set up as an orienteering leg (follow the CP’s in order). There were some beautiful sections on this hike: amazing creeks and very steep hills along the Great Northern Walk. Back on the bikes again to get us to the next section. This was kept secret until you got there. We had to collect 9 CP’s with a minimum of 4 on foot and the rest on the bikes. But we weren’t shown the location of the bike CP’s until we completed the foot rogaine… We decided to go for 6 on foot and find the rest on the bikes. This was the first time the navigation was a bit more challenging as it had been quite easy until then. Again some amazing spots, shame we were there in the dark as some spots would have had awesome views in daylight! (for those of you who have done Espresso 2008 – there was one CP in a very similar spot to CP15 on top of the hill…). 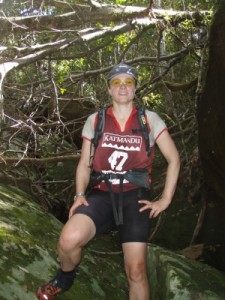 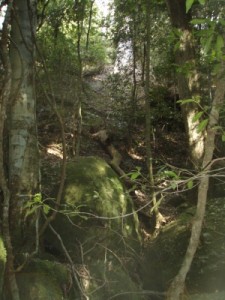 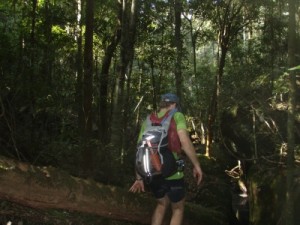 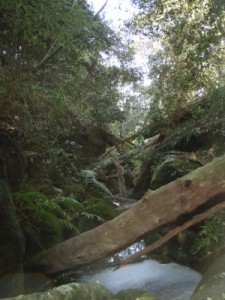 somewhere down there was one of the CPs 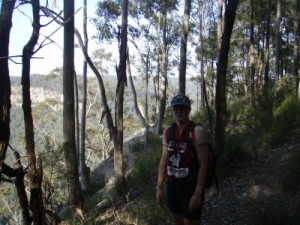 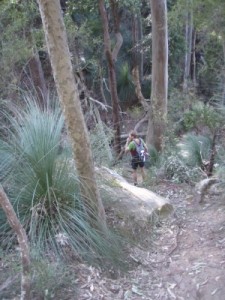 we find a trail which makes things easier 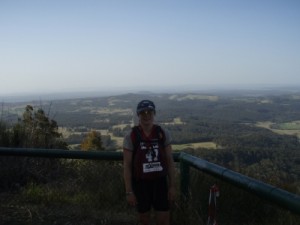 another CP at a great lookout

The bike rogaine was easy and after that we quickly continued on the bikes to the bus transfer. We had 5 minutes to get onto the bus so we had to be very quick! The bus dropped us off at the kayak start and at this point it was getting quite cold. The kayak with the moon up was beautiful and by the time we got to the end of the paddle the sun had come up too. As we had to start the last section (coasteering) with a swim and I was still shivering I decided to keep my longs on – what a mistake! Of course it warmed up soon after we emerged out of the mud and the soggy long trousers were a pain! We did really well until a hidden control in a small cave which we ran straight past! Grrr. This meant going back for it and having 3 teams that we overtook catch up with us again… Sprinting to the finish was the only way to keep them behind us, so we ran as fast as we (I) could 😉

Knackered, but very happy we sat down for some food and immediate results. We won some very handy spot prizes and spend the rest of the day packing up, cleaning, trying to find Marcus’ wallet and relaxing near some other lakes (forgot the name…). On the way back we did a scenic route through Sydney to get to the airport and we even had time for a drink in the lounge – thanks Marcus 😉