Making the most of our car and driver

Thursday evening we were loading the car. Tents, mattresses, sleeping bags, clothes, fridge full of food and drinks, chairs and table, and our head torches. Nothing unusual for a weekend of camping, right? But we still had to work on Friday…

As you know, we live in Dar, and we love to explore the country. But, Tanzania is huge, and the only way we can get to certain areas is to fly. Driving takes forever due to villages springing up alongside the major highways which in turn brings in ambiguous speed restrictions which are enforced rigorously by police with speed guns. Oh, and then there are the overloaded trucks….

So what do you do when you want to visit the national parks of the northern circuit and all the common options are crazily expensive? You come up with a clever scheme to make it more affordable and use all the tools you have at hand – our car, our driver and our camping gear…

And that explains why we were loading up on a Thursday night. Frank, our driver, was leaving Dar early on Friday morning to head up with our car and all our gear to Arusha in the north. It would take him all day to cover the 600kms to get there (around 11 hours), and he would find a safe spot near Arusha to stay overnight. We were still working on Friday, sleeping in our own beds on Friday night and then took a flight to Kilimanjaro Airport (about 50km out of Arusha) on Saturday morning. There we were picked up by Frank, with our car and camping gear ready to go.

We dropped him off in Arusha to spend the weekend with his family and continued to Lake Manyara NP. Lake Manyara NP is one of the smaller national parks of the northern circuit, a popular one for day-trippers on their way to the Ngorongoro Crater and the Serengeti as they drive past the entrance. From the airport this was still a little over 3 hour drive. 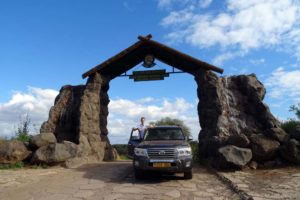 Jon with our car at the entrance of Lake Manyara NP

But we weren’t on a daytrip. On a friend of a friend’s recommendation we had booked the Lake Shore private campsite and were planning to spend 2 nights there. Tanzania had a 3 or 4-day long weekend because of the Eid holiday (you don’t find out exactly when Eid falls until the new moon is sighted, marking the end of Ramadan). Whatever the outcome, this was the perfect opportunity for us to see the sights of this small (for Tanzanian standards), but interesting national park.

We arrived around lunchtime and went through the arduous process of paying our entry and camping fees. As not many people come here privately to camp it took a little while… 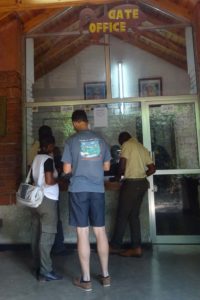 On the road in, just before the turn off to the gate, we had already seen a huge number of yellow-billed storks in the big trees, and they were all around the entrance gate too. There were thousands and thousands of them. Some of the trees are completely white. It looks like it’s snow, but they are covered in stork poo!

Once in the park our first mission was to find a picnic site as we were pretty hungry by now. We found a lovely spot with a stunning view, overlooking the open plains and the lake behind it and sat down for a relaxed lunch. 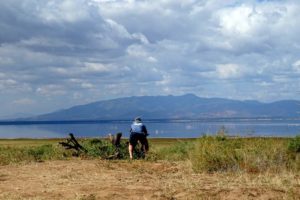 Jon at our first lunch spot in Lake Manyara NP

Lake Manyara NP is a small strip of land wedged between the soda lake and the escarpment of the Great Rift Valley. Large parts of it are very forested and spotting animals is not always easy, you have to work hard but occasionally are rewarded with great animal sightings. We loved the variety of birds here and discovered quite a few new species (for us). 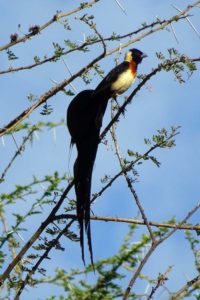 a stunning ‘new’ bird for our list – eastern paradise-whydah 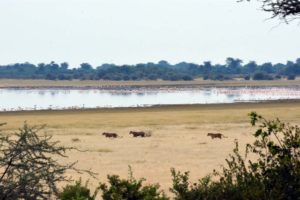 early morning lions out and about by the lake, we followed them to where the pride met up after a night’s hunting 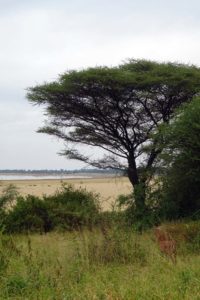 this bush buck watches the meeting of the lions with interest, oblivious to our presence right behind her 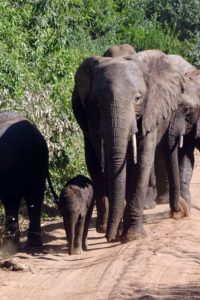 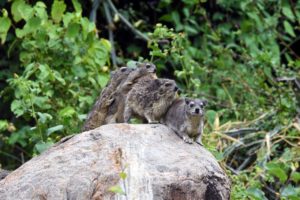 after rain or a cold night, these hyraxes huddle together for warmth, together they are called a colony of hyraxes 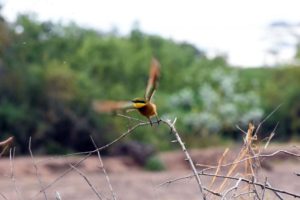 this little bee-eater is off to catch another fly or bee, you can see them in the photo if you look carefully 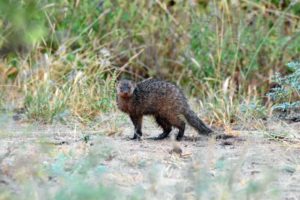 a rather scruffy-looking, damp banded mongoose

We travelled all the way to Maji Moto, the hot springs, on our first afternoon and got out to walk a section of the boardwalk. We didn’t want to disturb the dozens of yellow-billed storks perched on the balustrades and turned around before reaching the end. It was getting dark anyway and we had to get back to our campsite. 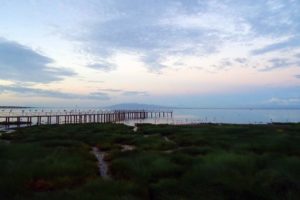 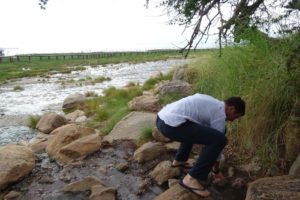 On the way south we had popped in for a few minutes to check out our campsite, which was a beautiful spot at the edge of the forest and overlooking the strip of open grassland at the lake’s edge. Being a ‘special’ campsite, we had the whole place to ourselves too. We pitched the tent, made dinner, gazed at the spectacular stars of the southern hemisphere, and enjoyed some chocolate washed down with a delicious port. 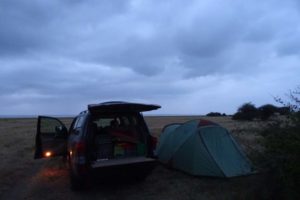 our stunning campsite (Lake Shore special campsite) at Lake Manyara NP, all to ourselves

Very early in the morning we were woken up by rain and had to rush out to put the flysheet on. As usual we prefer to sleep without, so we can look at the stars as we fall asleep and enjoy the breeze as it blows through the mesh of the tent. It’s a little cooler in Lake Manyara at night as we were at 1,000m but the breeze was still very welcome. 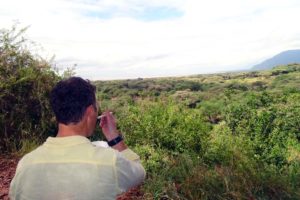 Jon eating breakfast with a view in Lake Manyara NP

The next day was a full day safari from early in the morning till the sun went down around 6.45pm. We loved the birdlife at the edge of the lake and were stunned by the number of great white pelicans here. There must have been many thousands of them, all of them deciding to fly overhead as we were standing at the lake’s edge after lunch. 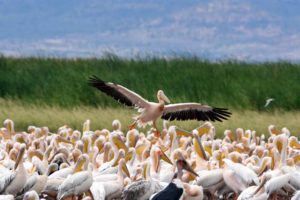 tricky landing with so many other pelicans around 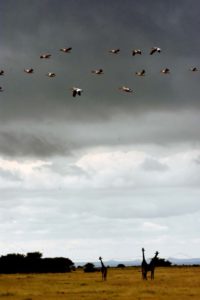 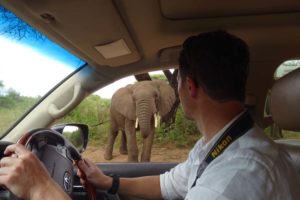 we haven’t done many self-driving safaris in Tanzania, we enjoyed being back behind the wheel ourselves 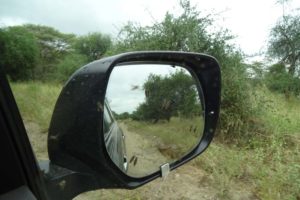 some areas of Lake Manyara NP have a few pesky tsetse flies zooming around, we close the windows when that happens! How many can you see here?

And we didn’t stop after a full day of driving… we had organised a night safari. Lake Manyara NP is one of the very few national parks in Tanzania where this is allowed, and we were very keen to head out at night. Self driving is not allowed, so the tour company would pick us up from our campsite at 8pm and we would be out until 11pm. We had never been out that late. They arrived with the open vehicle and three people; Sam the driver who was also our guide, a Tanapa (National Park) ranger, and Doctor, our spotter extraordinaire who sat on the front of the vehicle with his very bright spotlight.

Within minutes we had spotted a porcupine! We were off to a good start. It’s hard work on a night drive, but the rewards can be worth it if you are lucky. We found a beautiful large spotted genet right next to the road, oblivious to us for the first minute. We saw several bushbabies (galagos) and hippos, nightjars (birds), the genet and porcupine, and Doctor even managed to find a chameleon. They are hard to find when walking at a snail’s pace so spotting one from a driving car was very impressive. 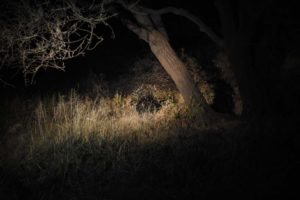 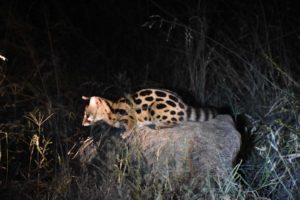 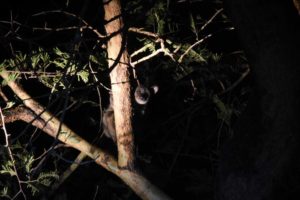 a galago, also known as a bushbaby, checks us out. They normally jump away as soon as they see you

Jude was allowed to take over the spotting seat for a while and found a hyena and some more bushbabies. Jon kept spotting dikdiks… The light was really powerful and made spotting easier. You could actually see the animal instead of having to guess what it is with our head torches (the ever trusty ay-ups). 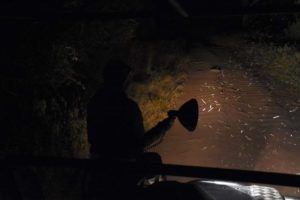 The next day we finished exploring the remaining tracks in the park before leaving just before 5pm. After a quick stop at the viewpoint from the escarpment over the national park, we had to drive back to Arusha where we were picking up Frank. He dropped us off at the airport where our plane took off about 40 minutes early… only in Africa… 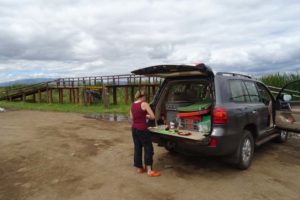 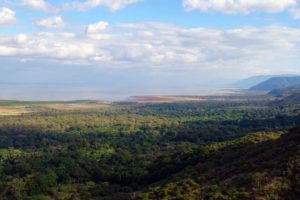 view of Lake Manyara NP from the road up the escarpment towards Ngorongoro Crater.

The next day Frank drove the car back and on Tuesday night we unpacked. Our experiment was successful, this was a perfect way to explore the north of Tanzania and we will definitely do that again! flying spiders with their webs – the gentle breeze blew the webs with spiders across the open grassland, we were covered in it!