We’re not quite sure who told us about Klein’s camp or when. But we had always been keen to check it out, and when Jude’s birthday came up we decided to book a long weekend. 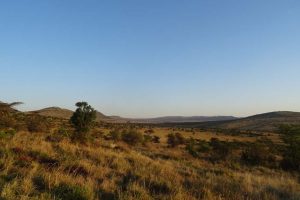 view from our hut over Loliondo

Loliondo is a large (6,221km), roughly a third of the Serengeti in size, Game Controlled Area (GCA). Being a GCA (and not a national park) means people can live in the area, cultivate the land and keep livestock. It also means hunting is allowed and, in the case of Loliondo, land is leased for trophy hunting by the Otterlo Business Corporation (OBC) with links to the royal family and parliament in the United Arab Emirates. According to Penny, the manager at Klein’s camp, the sheik only comes sporadically, but when he does it creates a clash between tourists who usually don’t want to see wildlife shot… unless it is with a camera… News articles seem to suggest hunting tourists, the version with rifles, seem to come more often than just ‘sporadically’. 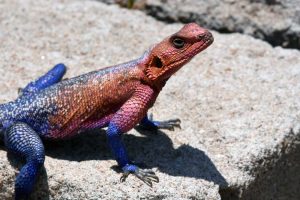 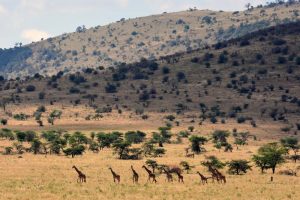 a journey of giraffe is dwarfed by the scenery In November 2017 Tanzania ditched the plan to move some of the Maasai people to create a large, protected area for the OBC (of course this area would not be protected from hunting), which caused a lot of demonstrations. The hunting licence has also been cancelled (but apparently the hunting hasn’t stopped). 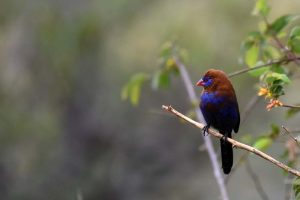 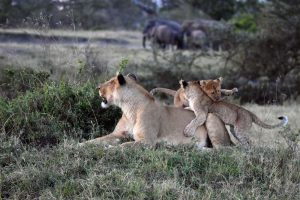 At the moment the area is peaceful and game drives take place in a tiny section of the Loliondo GCA, right in the top left corner where it borders the Serengeti NP and Kenya. It is a small area with a variety of ecosystems and sufficient numbers of wildlife to keep people happy for a few days. But you can also pop into the Serengeti to see the migration cross the mighty Mara River if you are there in the right time. 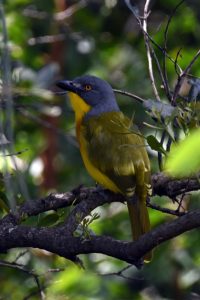 We made the long drive, but unfortunately had to spend it with 4 other guests who were more interested in seeing elephants wonder about than trying to see a crossing, so we were unsuccessful. It felt wrong, and we certainly expected more from a luxury camp, but couldn’t change it unfortunately.

In Loliondo there are no restrictions on night driving, and one night, late, after dinner, we hopped in the car again with Alpha and Joseph to see if we could find the elusive aardvark… we tried really hard, but were unlucky. In fact we didn’t see much wildlife at all, but towards the end we managed to catch a glimpse of a serval. 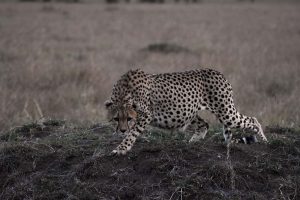 this cheetah is aware she has been spotted by the lioness who is enjoying the remains of her kill and she quickly wonders off, note her full belly 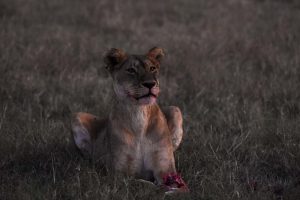 this lioness is enjoying the leftovers of the cheetah kill, looking rather smug with her lipstick on

Klein’s camp itself is built in a stunning location. There are only 10 cottages, spread at the foot of the Kuka Hills, basically overlooking the 10,000 hectare private concession. The birdlife in and around camp is fantastic and we loved walking around the trails spotting old favourites and even some new birds. Chameleons could also be found in the bush and we even saw a slender mongoose trotting away as we went for a dip in the pool. 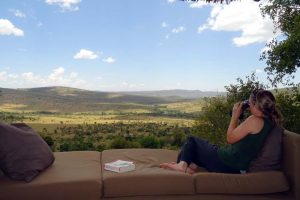 Jude checking out the view from our hut 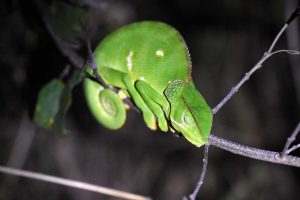 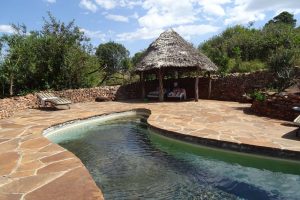 Jon relaxing after a swim 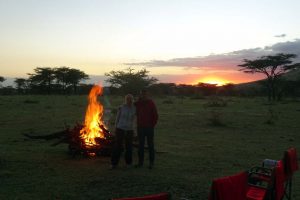 During one of the drives Jude was allowed to take the seat on the front bumper, and, for a short drive on the open plains, she was the spotter. The next day, staff surprised Jude with a birthday cake and songs after dinner, we were happy to share the cake with them for their efforts. It had been a good birthday weekend with some new birds, lots of elephants, plenty of wildebeest, incredible views and campfires, bushbabies and genets, some chameleons, loads of vultures feasting on a carcass in a little creek, lion cubs and even a cheetah. Jude in charge of spotting 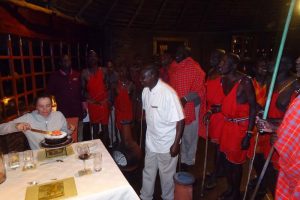 Jude cutting the cake whilst the Masai hum their sung