One Sunday morning we got up in the dark and quickly put on our down jackets, beanies and uggies. We had breakfast before hopping in the car to drive to Mt Barney where we were meeting Mingyuan, Hugh, Josh, Laurene, Ian, Moira and Mariano at 7. Sipping our hot mugs of tea we saw the temperature gauge in the car drop to 1 degree! It was pretty cold out there. 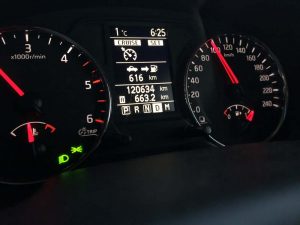 it was pretty nippy on our way to Mt Barney

As we left the cars in the Yellowpinch carpark and walked out into the sunshine through the paddock, we were all slowly defrosting and shedding layers. Even the wedge-tailed eagle pair were sunning themselves in the top of a dead tree, trying to warm up. 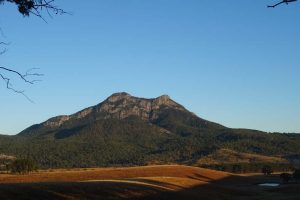 stunning view of Mt Barney once we start the hike 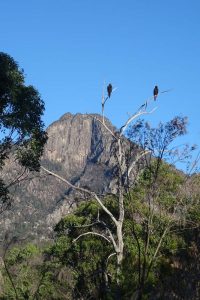 It wasn’t long before the incline of the ridge became steeper and Mingyuan, Laurene and Jude took up position in the back of the group. We regrouped at certain points until we all went a lot slower as we now had to navigate our way up Logan’s ridge as there is no trail. Hugh had the track notes, and both Hugh and Mariano carried a gps, but at some points it wasn’t clear where to head next and some scouting of options was necessary. 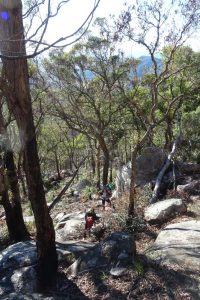 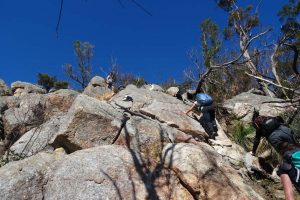 Occasionally we had to clamber up some rockslabs and at one point a few beached whales were spotted after flopping onto a tricky rock above a chimney.

Logan’s ridge slowly became steeper and steeper, and occasionally quite exposed. We were making good progress and were getting higher up the ridge. The weather was stunning, sunny and only the tiniest breaths of wind. 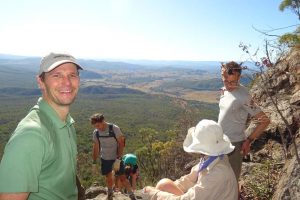 a breather for Jon, Mariano, Laurene, Moi and Hugh 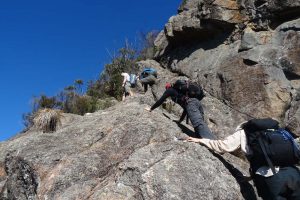 Getting higher up, Moi, Jude, Ian and Hugh 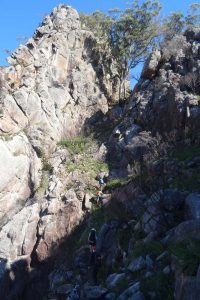 Jude and Moi following Ian and Mariano up into the gully 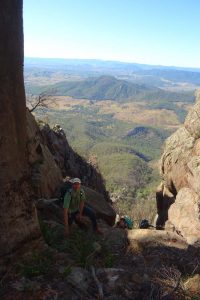 Jon, Laurene and Mingyuan coming up a steep section 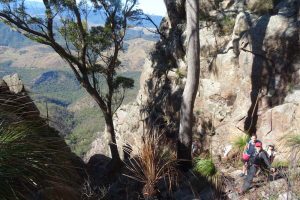 Jude, Mingyuan and Laurene having a little break, Hugh coming up

At the top of yet another slab we found ourselves on a small saddle and as it was getting close to lunchtime, we decided to have a break here as we were still a bit too far from the top to get there for lunch, and we didn’t want to get hungry partway up the last section as it would include one of the sketchiest bits. 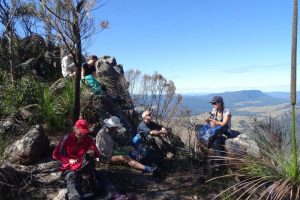 time for our first lunch stop

The rope came out on a tricky bit so we could haul ourselves up on it. 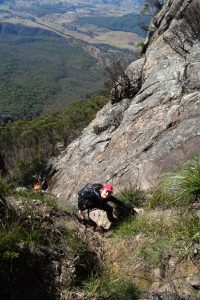 Jude coming up another steep gully with Mariano behind 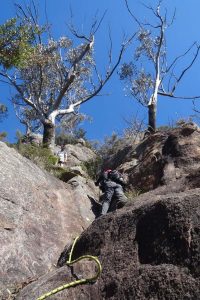 Jude using the rope to get past a tricky section

Jon used the harness and rope for one section that was too exposed for him, with Hugh belaying him from above. It was a good thing he had lugged it all the way up (thanks Hugh!).

Not much later we reached the top, after another short semi-exposed section. Time for a second lunch, before taking the obligatory piccies and starting our descent via Peasant’s route, a much easier way to get down. 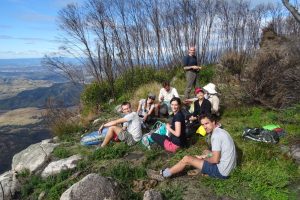 we made it to the top – time for a second lunch 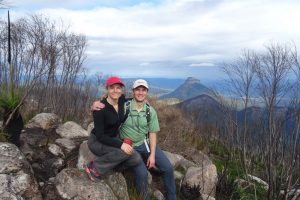 the obligatory piccie at the top 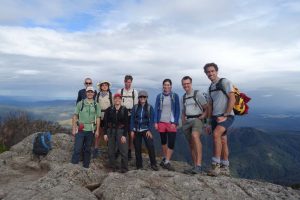 As we reached the forested saddle the heavens opened up a little and the rain jackets came out. The path down was easy, a little steep in places, but a nice single track winding its way through boulders and stately trees.

Just before we reached the fire road out for the last section, Moi had a stack. Her feet went out from underneath her and she landed on her bum. Unfortunately whilst trying to break her fall she broke her wrist and the first aid kit had to come out. Luckily we were nearly at the carpark but it still meant an agonising walk out for her and a trip to the hospital once back in Brisbane. 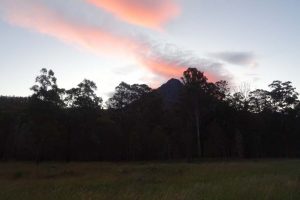 the sun was setting by the time we were off the mountain, we still had a little way to go to the carpark so by the time we reached our cars it was dark – a long, but very rewarding day

Despite this we had an awesome day, enjoying the views, company, food and perfect weather. We’re ready for our next mini weekend adventure!