There are countless majestic valleys in the Pamir region and we wanted to explore at least one of them a little bit before leaving this beautiful region. We had read about homestay options in Geisev, a miniscule village in a small side valley of the Bartang Valley. To get there you must cross the wide, raging river on a pulley ‘bridge’ and then hike for 2-3 hours as there are no roads to the village itself. That sounded great. 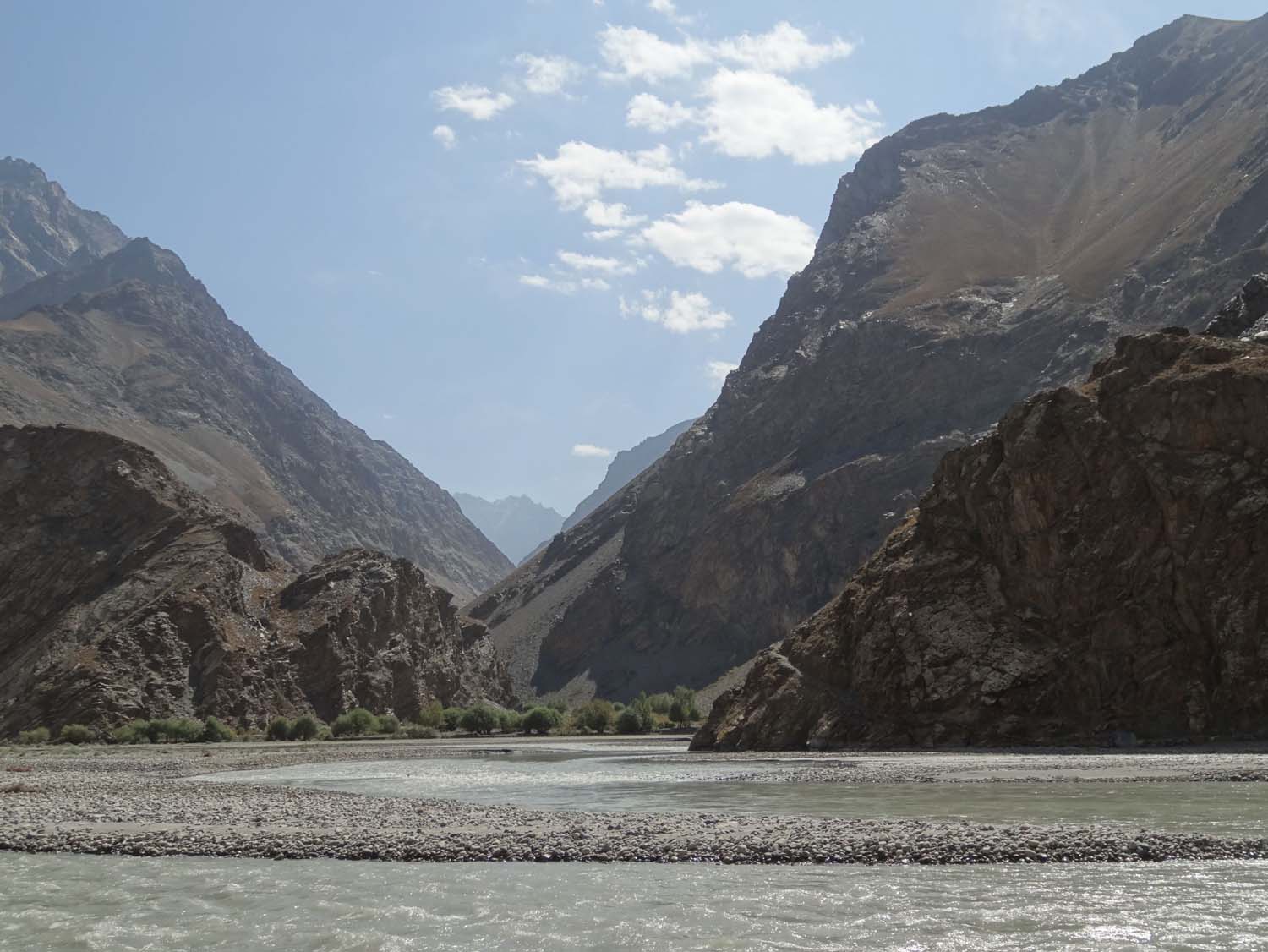 But after we had parked the car and took a closer look at the pulley ‘bridge’ we realised that the last person who used it had also gone in the direction of Geisev and the little cabin was parked on the other side of the river. The only thing remaining on this side was a crude construction made of some wires slung around the cable with a few branches as a very uncomfortable make-shift seat. We have to cross the river on that?!

Jon wasn’t getting anywhere near the thing, so Jude decided to give it a go. Sitting on the ‘seat’ you need to heave your full weight along the 80m cable, shuffling the wire a few centimeters at the time. Pretty hard on the first half of the crossing, and almost impossible once you are already exhausted on the second half when the sag of the cable means you are pulling yourself uphill. Shaking from exhaustion and covered in bruises on arms and legs from the wire, Jude finally managed to crawl into the little pulley-driven cabin after about an hour, and Jon was hoarse from shouting encouragements over the raging river. 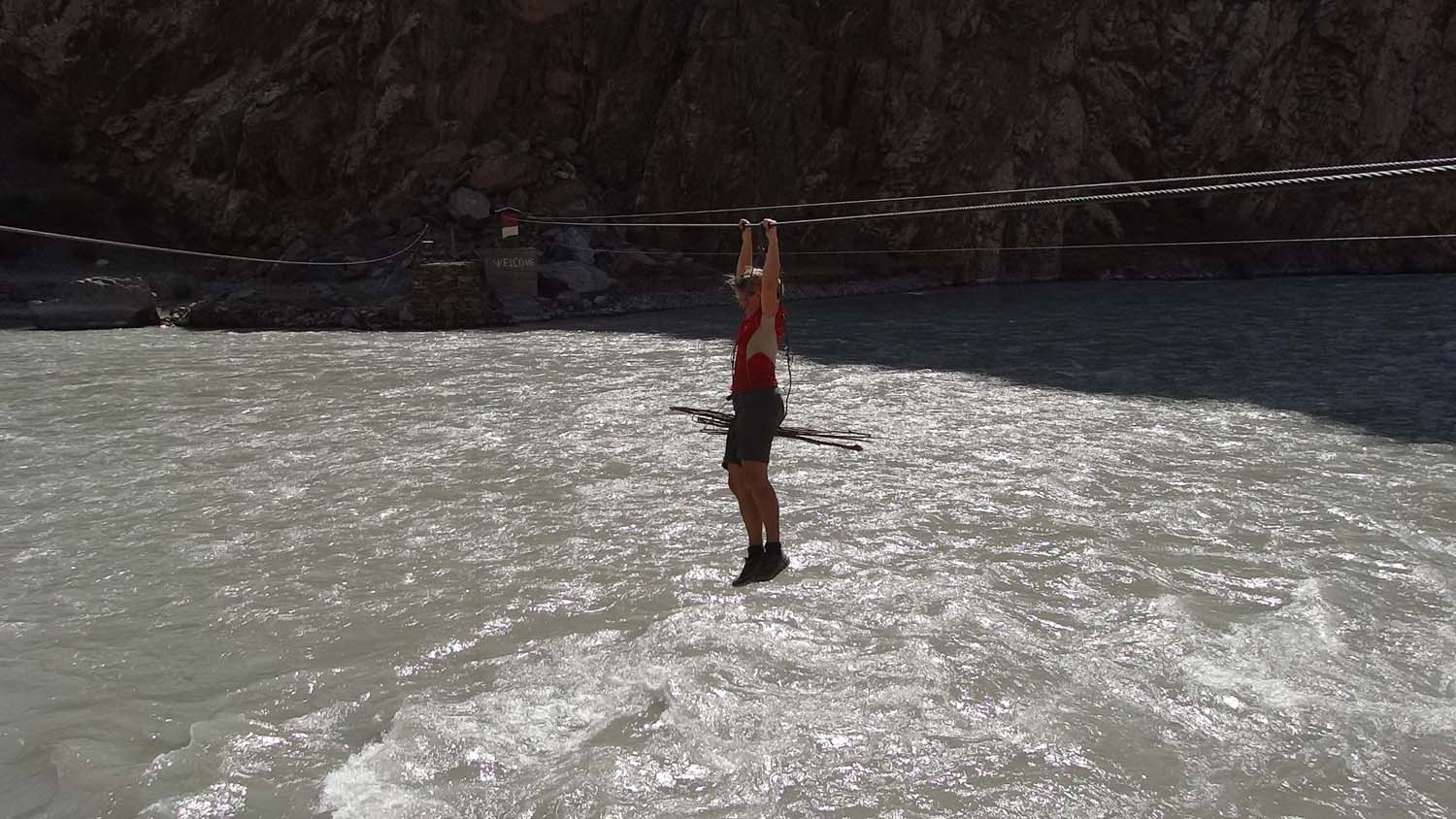 the very comfortable and secure way to cross a river… 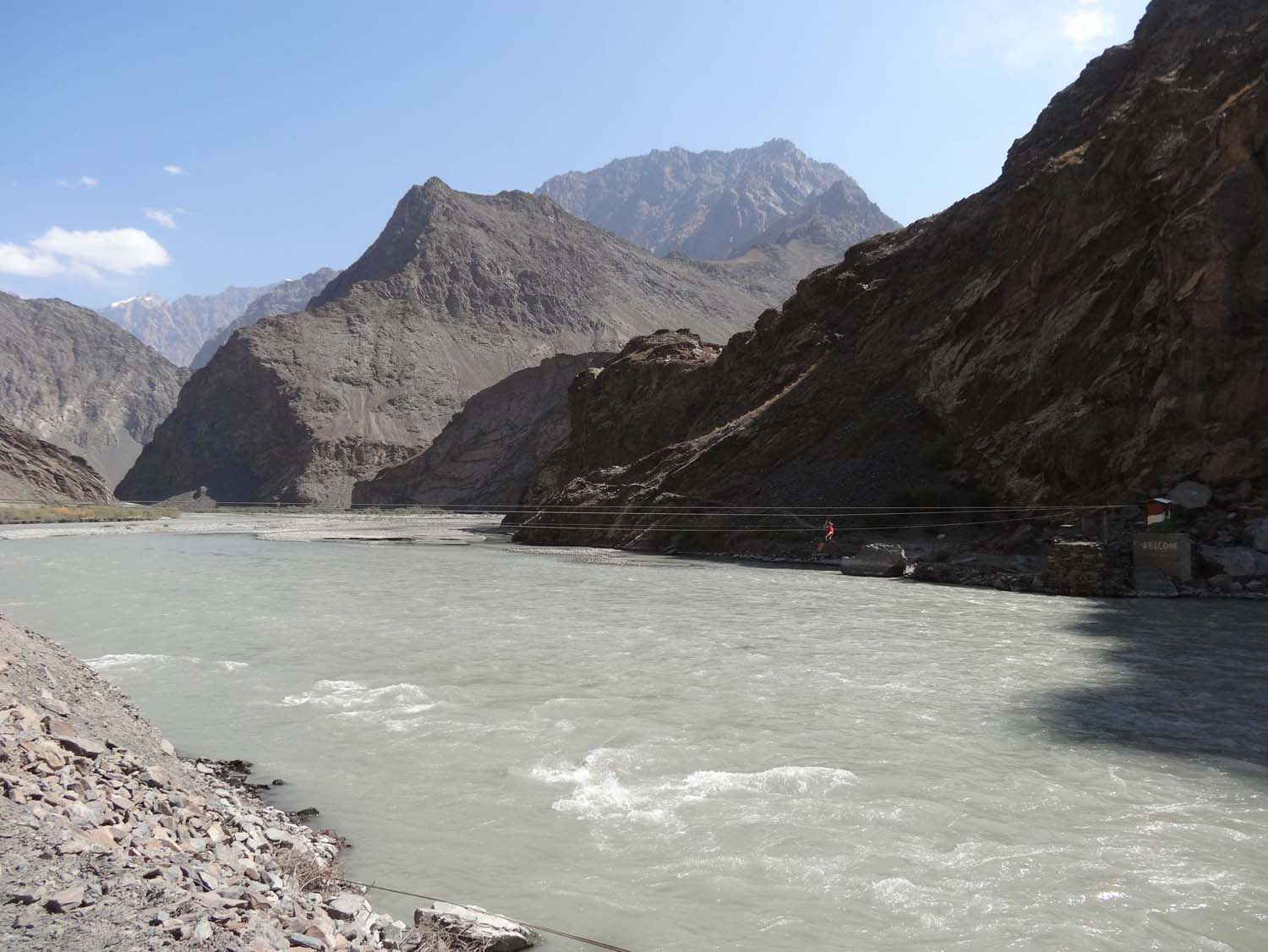 slightly going up makes it even harder on the second half

After recovering, Jude climbed into the little cabin and wound it back to Jon and the 2 bags. The cabin was big enough to carry everything, and we finally all crossed to start our hike. It was a short and beautiful hike, and a few hours later we walked into Geisev where we were invited to stay with Lola in her traditional Pamiri home. We enjoyed dinner underneath the big apricot tree and sat there drinking tea with the locals until long after the stars had come out. Then the party moved inside and the vodka came out. We managed to get away with drinking only a few cups before crashing onto our multiple matrasses that had come out from a pile in the corner. Thick blankets were added to make sure we had a perfect night’s sleep. 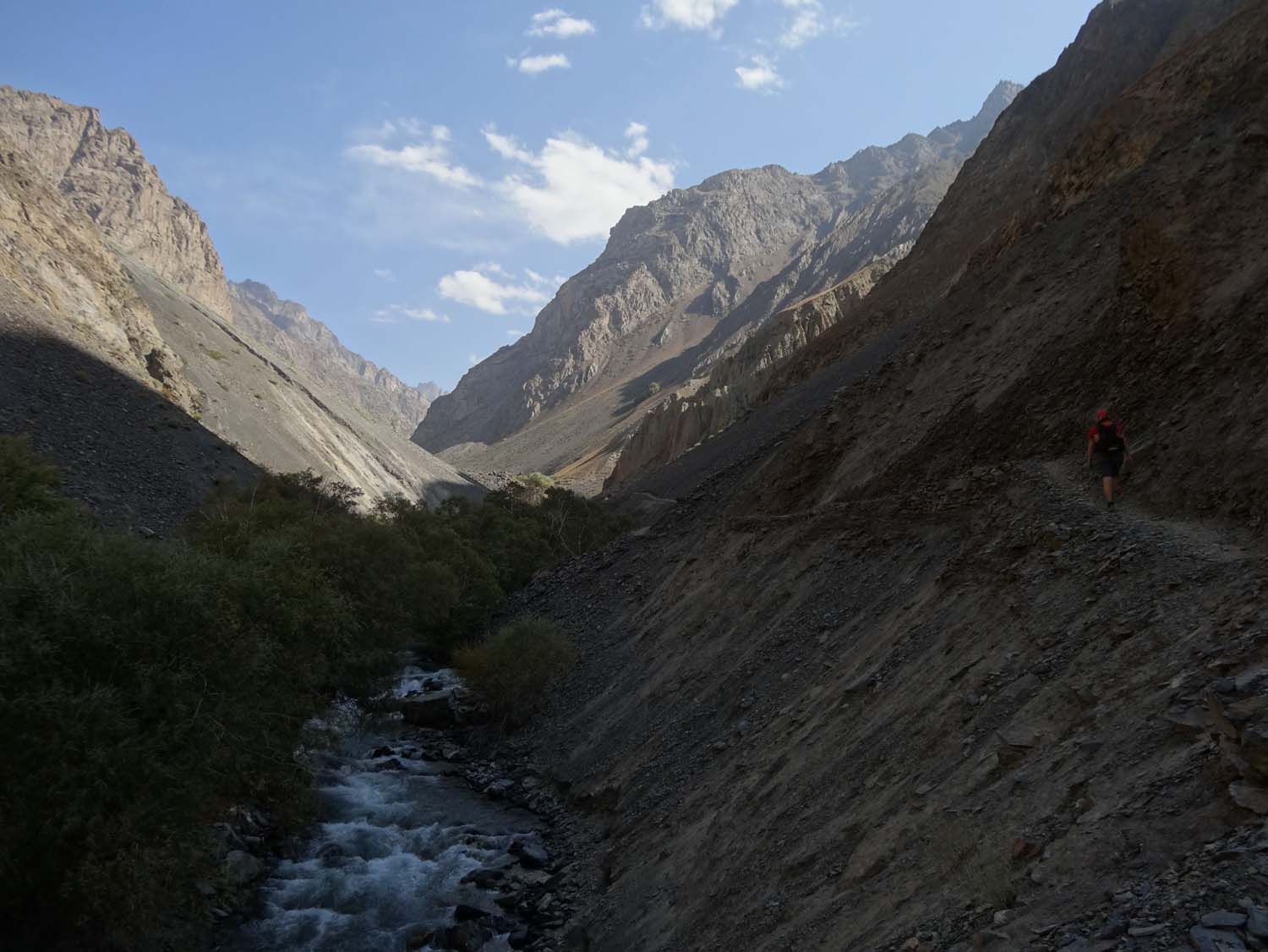 hiking up the Jizev Valley 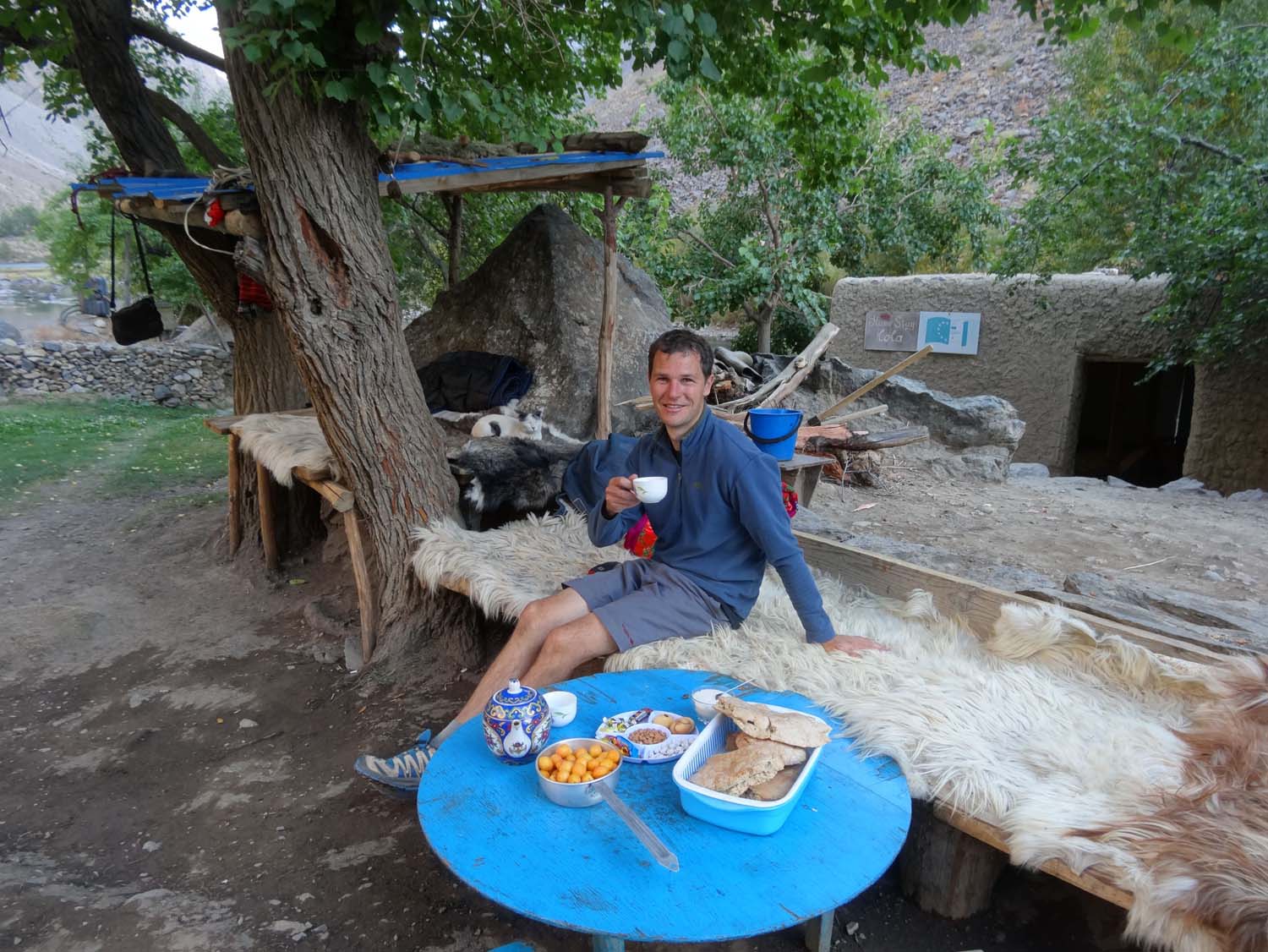 our homestay in the background, this was where we had tea, dinner and breakfast

After breakfast the next day we walked around the tiny village and explored the local lake. It was interesting to see the villages preparing to hibernate for the long winter, stacking up the hay for the animals and preserving fruits. After saying our farewells, we headed back down the valley to the river to find yet again the little cabin was on the other side of the river! But luckily we had a trolley on a second cable that could be pulled across. Jon was the lucky one this time, and as it had wheels it took him only 5 minutes to haul himself across to safety. 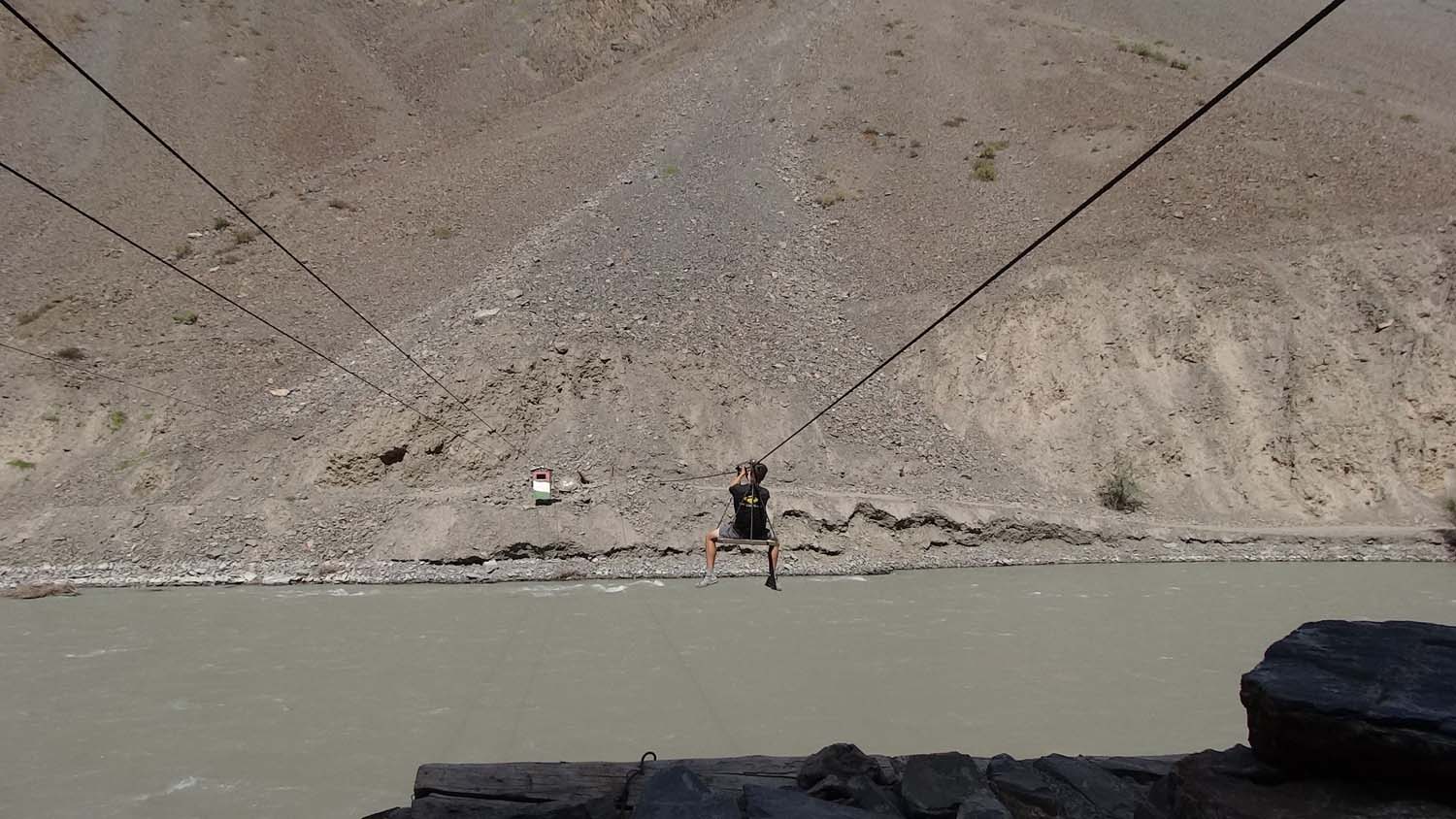 Jon’s turn to pick up the cabin, note the comfortable seat and wheels on his trolley

From the Bartang Valley it takes 2 days to drive to Dushanbe, the capital of Tajikistan, due to the bad roads. Our mission in Dushanbe was to pick up our last visa for the trip at the Turkmenistan embassy. First they told us it wasn’t open that day, but after some insisting (it was open according to their sign), we were allowed in. They still wouldn’t help us, but after some further negotiating they did tell us where the bank was we would have to use the next day to pay for our visas, saving us valuable time the next day. We returned in the morning, filled out yet more paperwork, waited, then we were finally given the receipt needed to go to the bank, battled traffic across the city, paid at the bank, drove back to the embassy all before it closed at midday… We were now the proud owners of all visas required to drive our originally planned route. 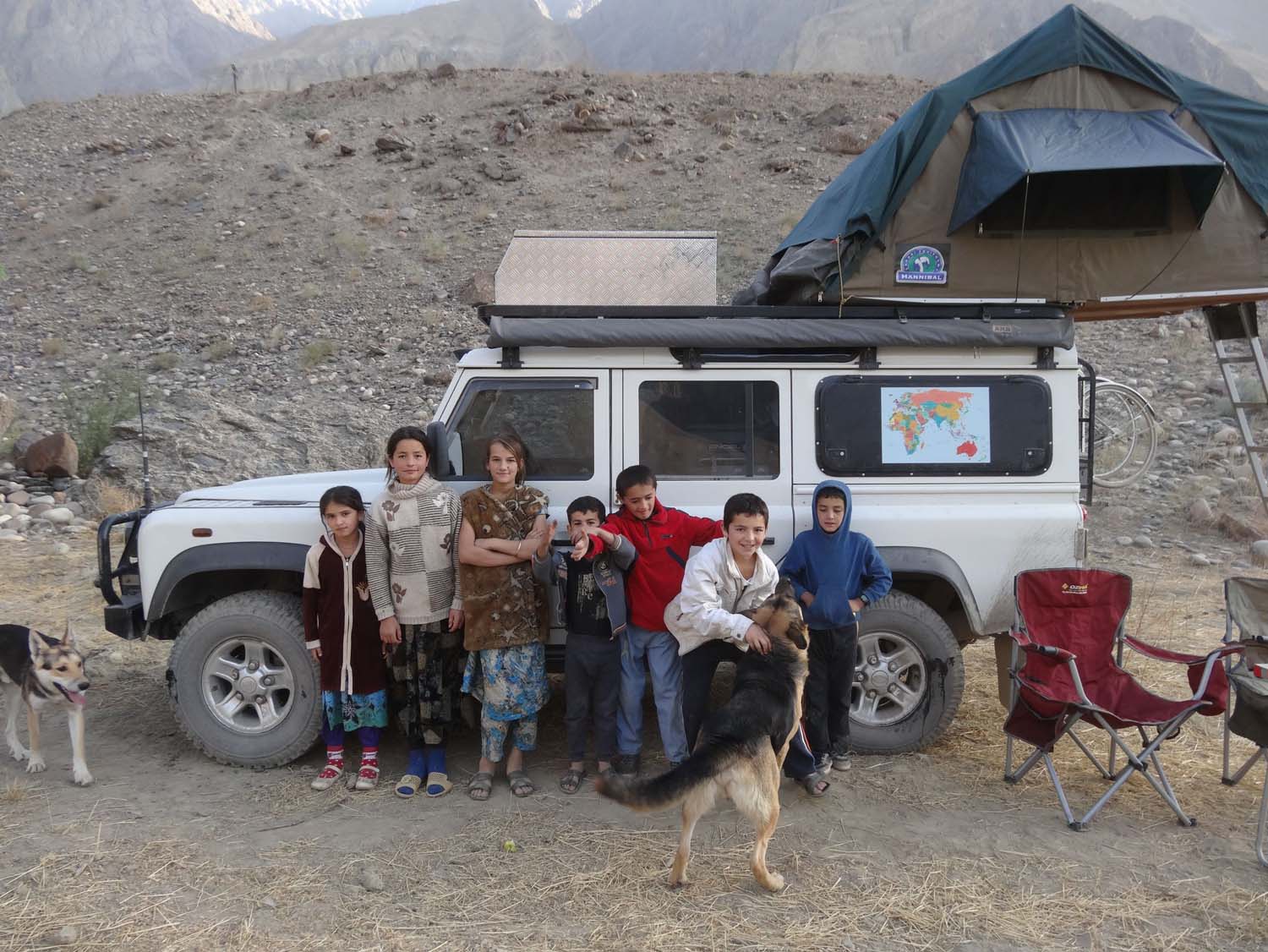 breakfast visitors, this time a bunch of kids spotted us before they had to go to school 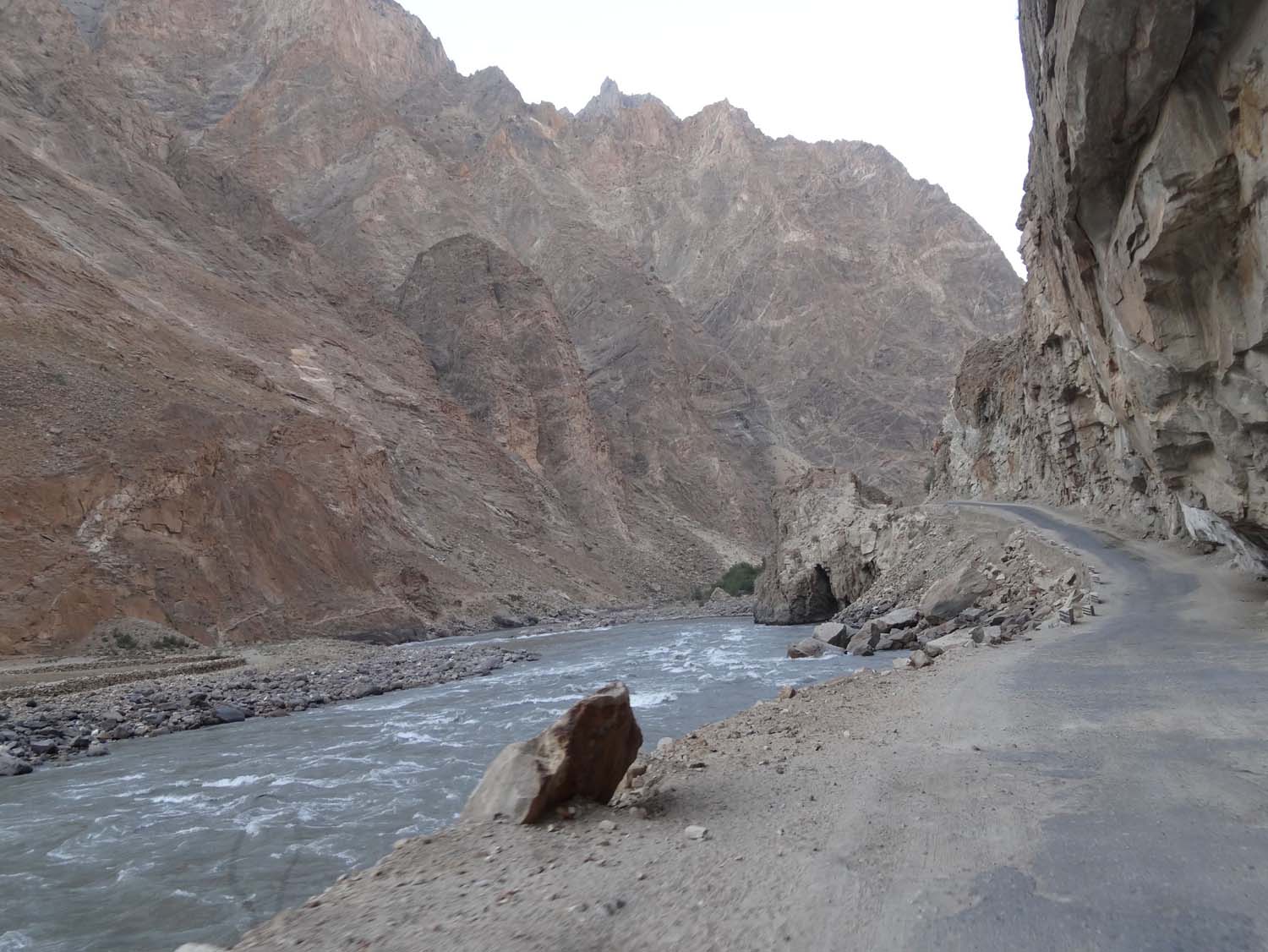 the road to Dushanbe from Khorog 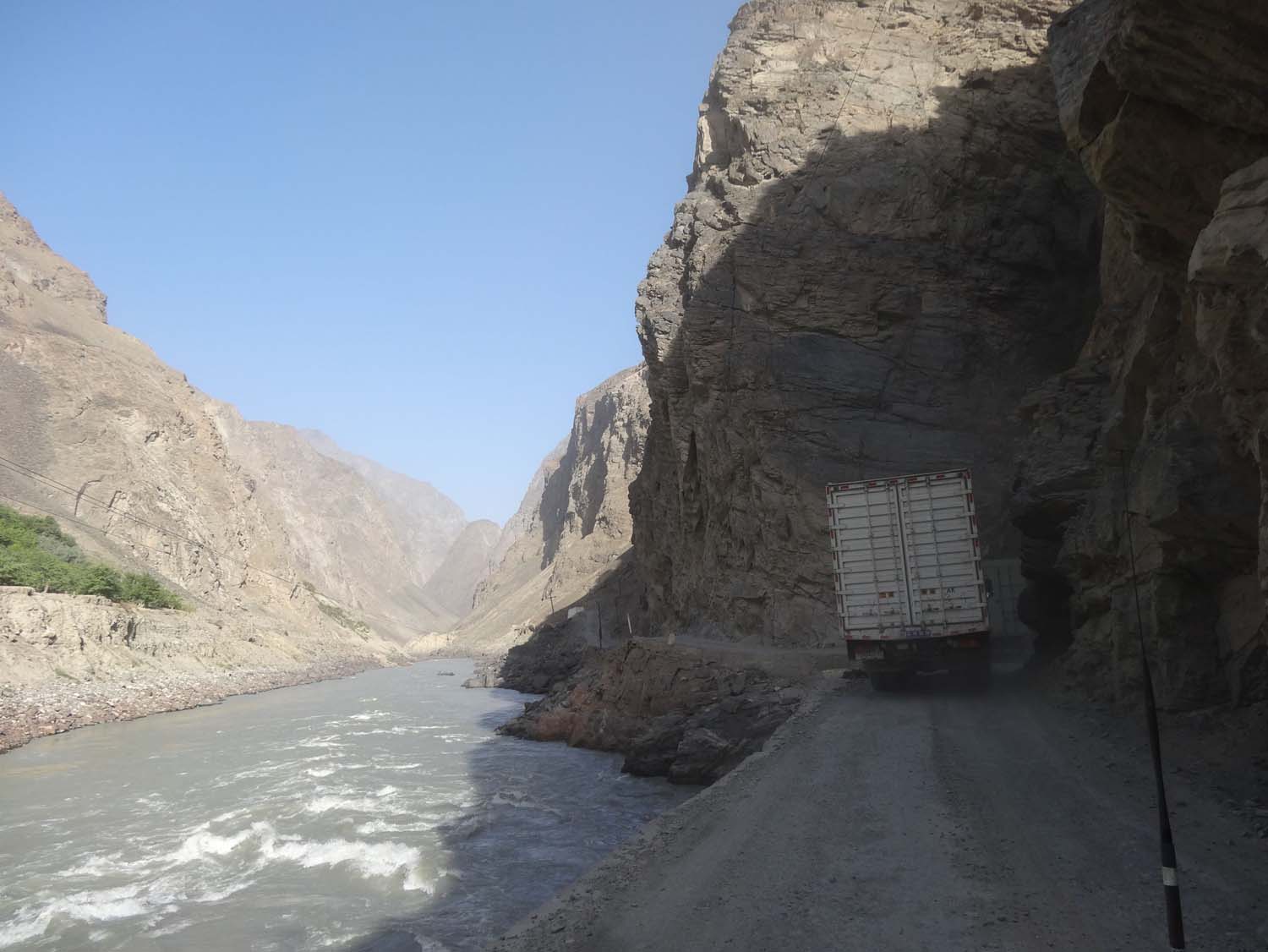 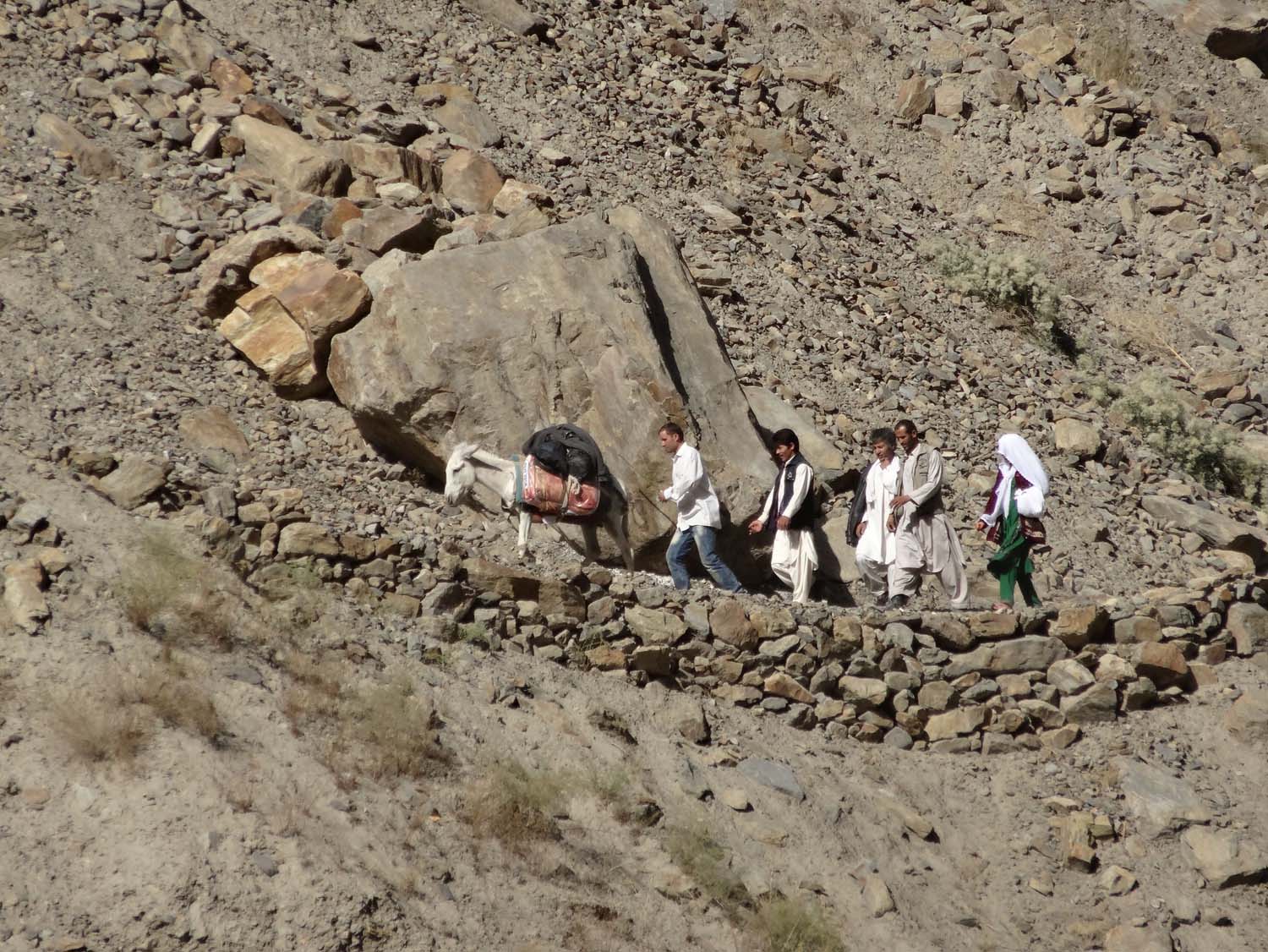 Afghans walking on the amazing trail, often hacked out in the rocks 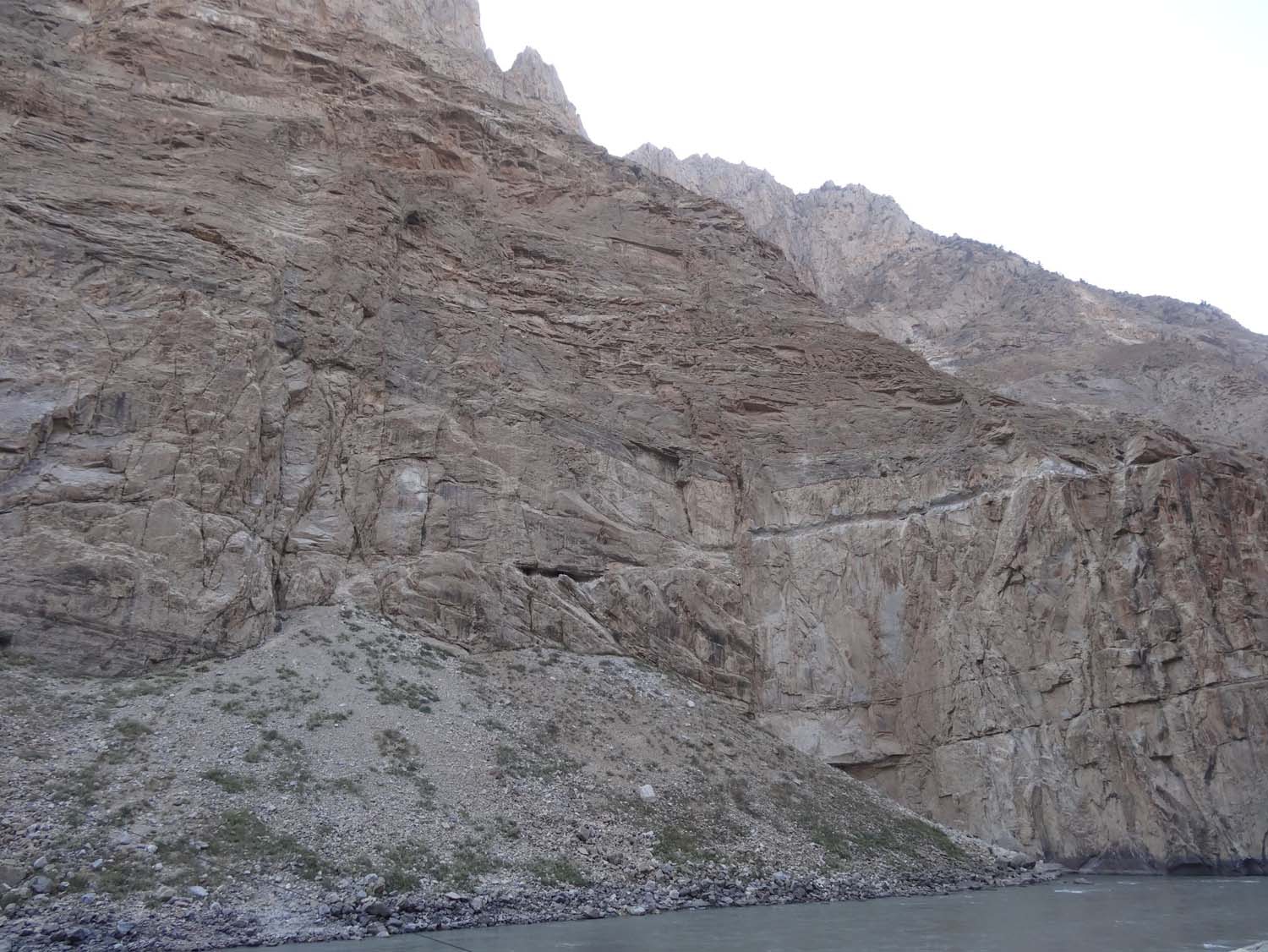 can you spot the hiking trail on the Afghan side? 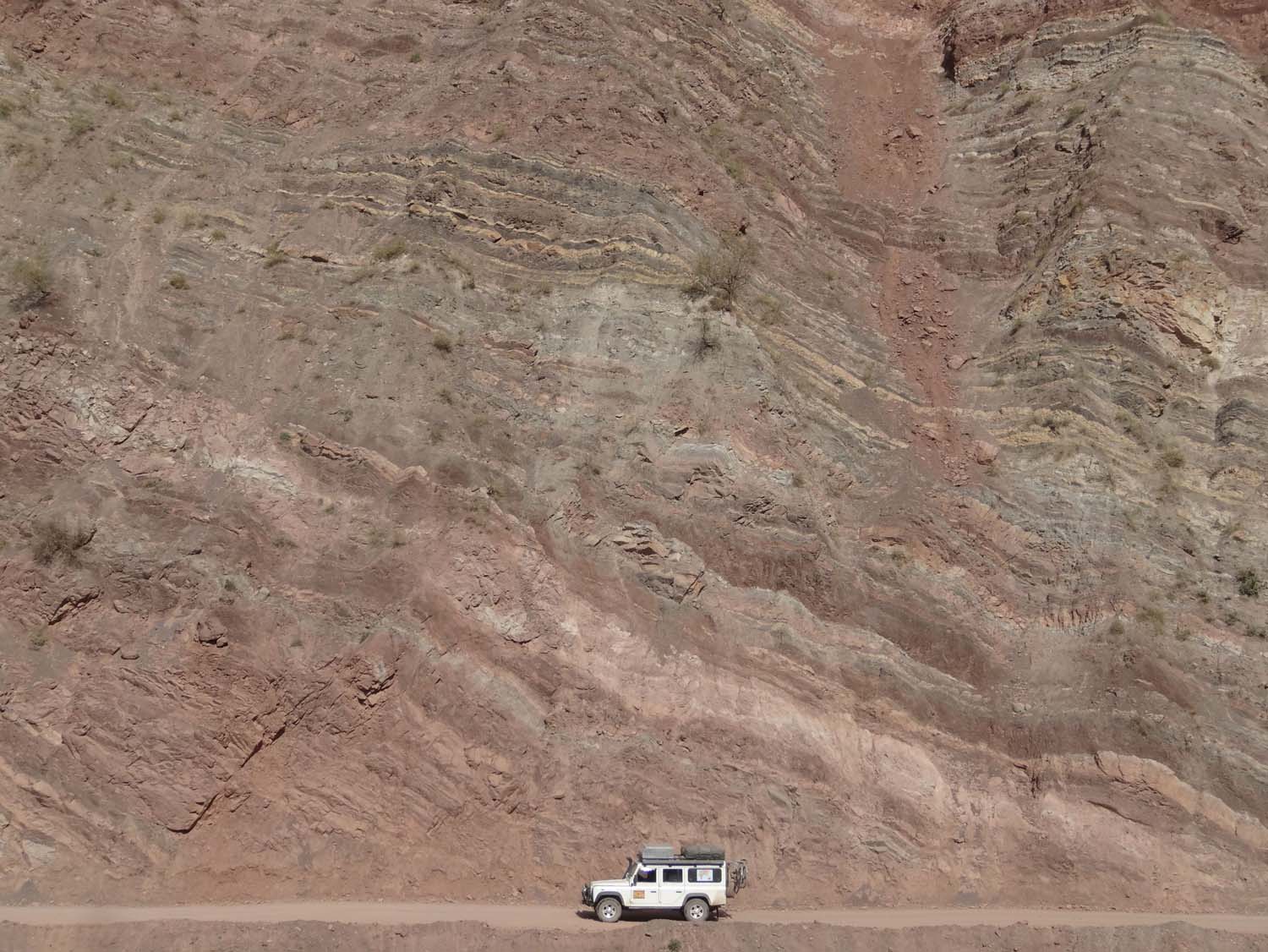 cool rock formations for the geologists amongst you 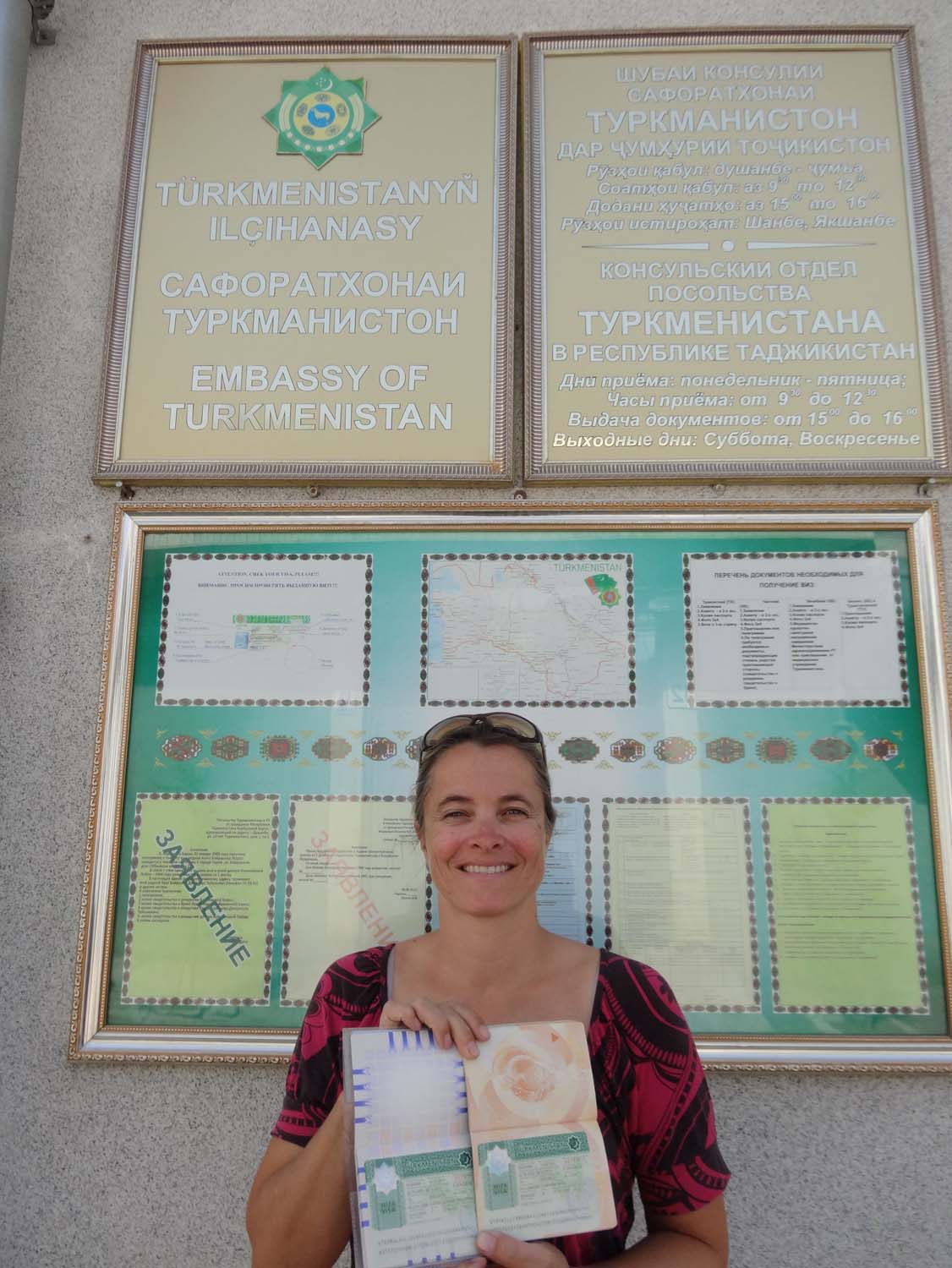 our last visas needed for the trip! (we think)

We decided to push on, as Dushanbe is not really a city to linger in, despite our excellent camp-site at the 5-star Serena Inn. We stopped at the market and replaced the bits which had been stolen in Murgab, stocked-up on food and drove straight out to the Hissar fortress. The fort, the medrassas and the old bathhouse were very impressive and looked stunning with the last rays of sunshine on them. But being there at this beautiful time of the day also meant we were leaving as it was getting dark. That, plus a chaotic traffic jam meant we were trying to find a campsite amongst the lavish mansions of the rich in the Varzob Valley just north of Dushanbe in the dark. Not the best time and place to look for a campsite… We found one in the end on a little side road, next to a fast-flowing stream that drowned the sound of trucks and buses thundering past through the night. Their headlights just reached the tent when passing, so we had a complete sound and light show. 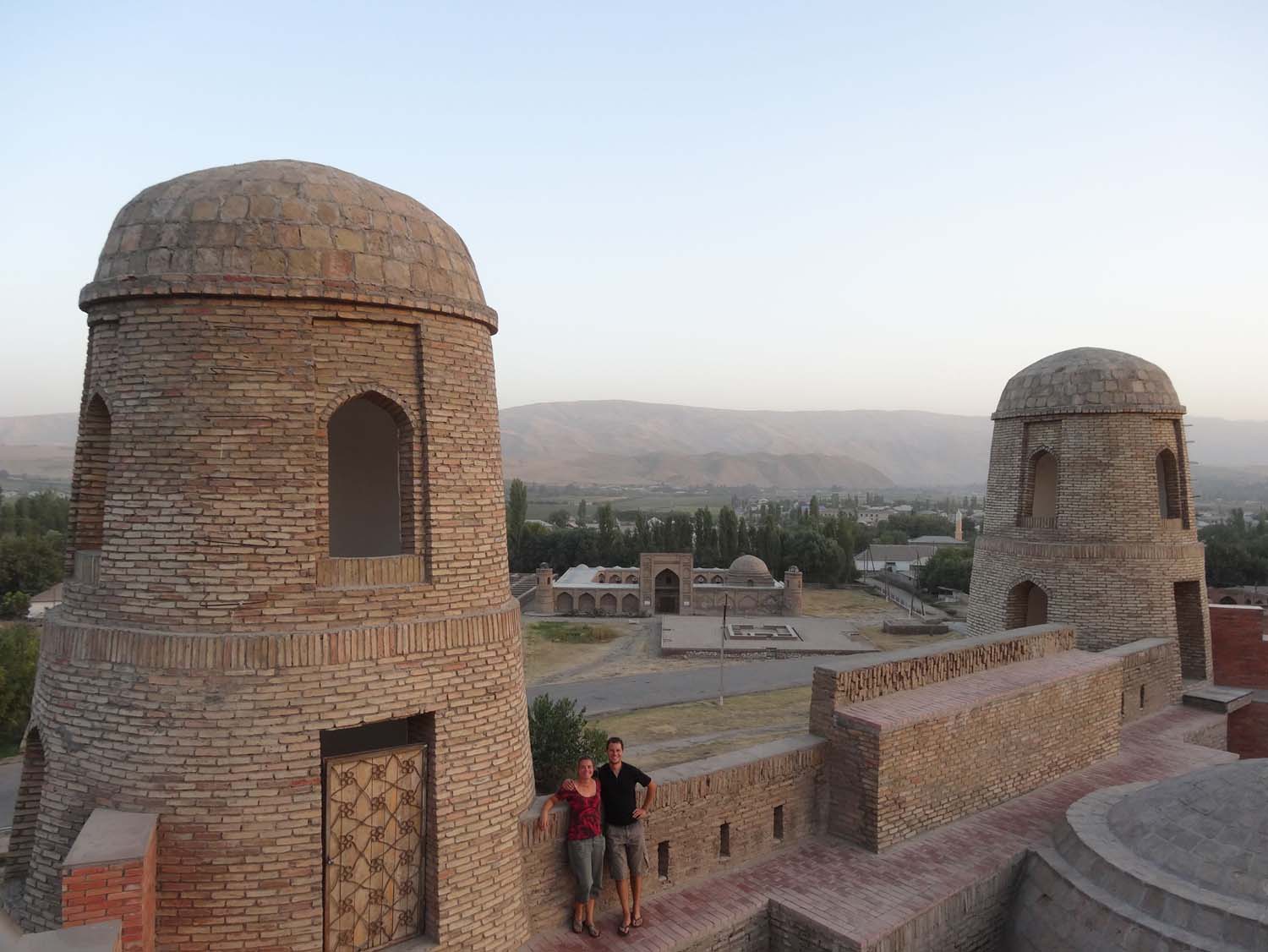 gate of the old fort, one of the medrassas and the old bathhouse in the background 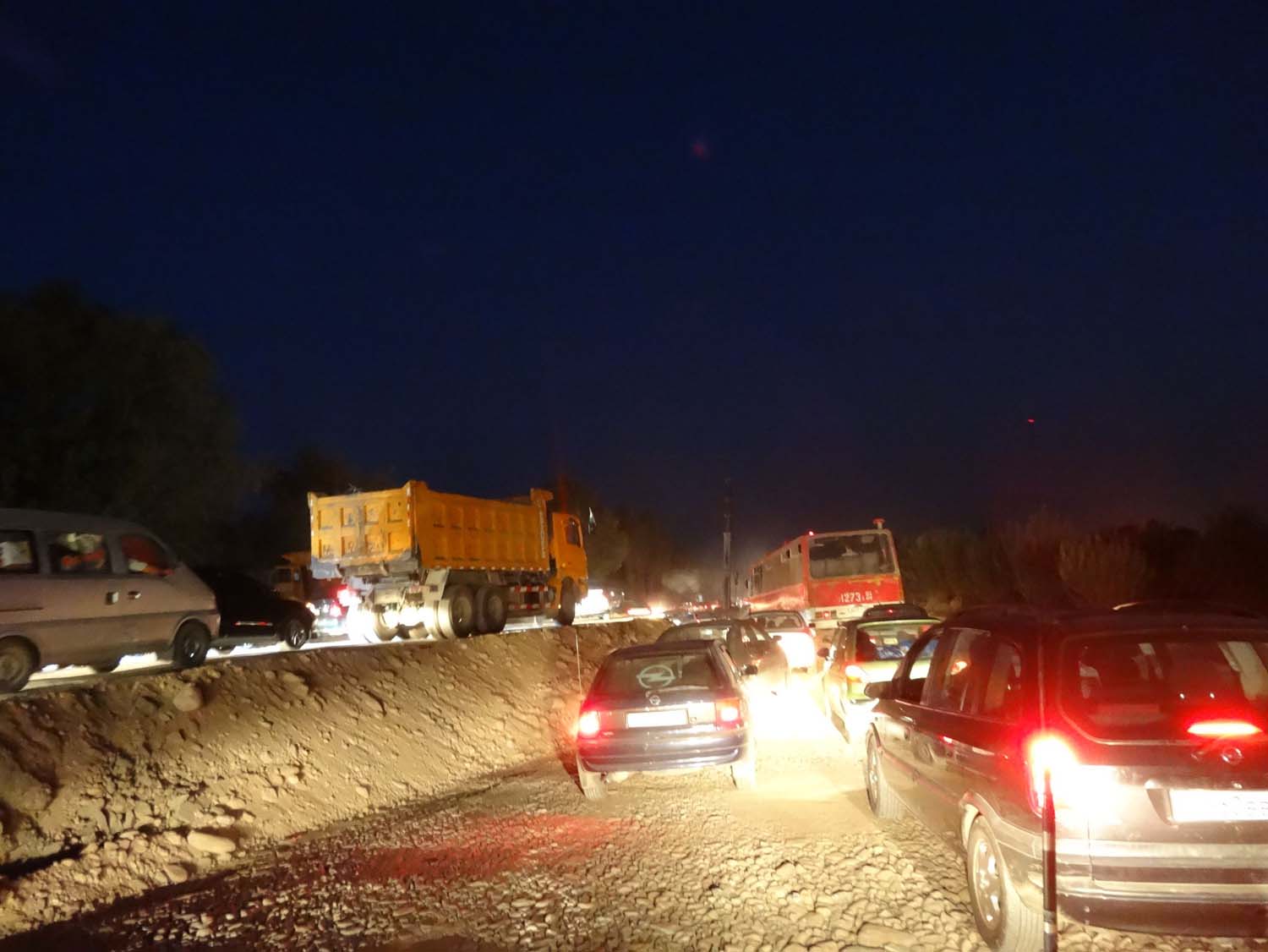 In contrast to the road into Dushanbe, this road is brand new, built by the Chinese and paid for by the Germans, and we were flying along when we got to a tunnel. This tunnel had been built so vehicles wouldn’t have to go over the dangerous 3,372m Anzob pass anymore. But we would take the pass any time. Oh My God, this is no doubt the most dangerous tunnel in the world. It’s about 6-7km long, without lights, reflectors or fans. Its surface has completely disintegrated, with massive potholes everywhere and has flooded in most areas making the potholes invisible under a layer of water… It’s just wide enough for 2 vehicles, but they planted 2 massive – but not working – fans in the middle of the road. Then, to top it all off, part of the ceiling had collapsed in one area, leaving a ginormous piece of rock blocking one of the lanes too. 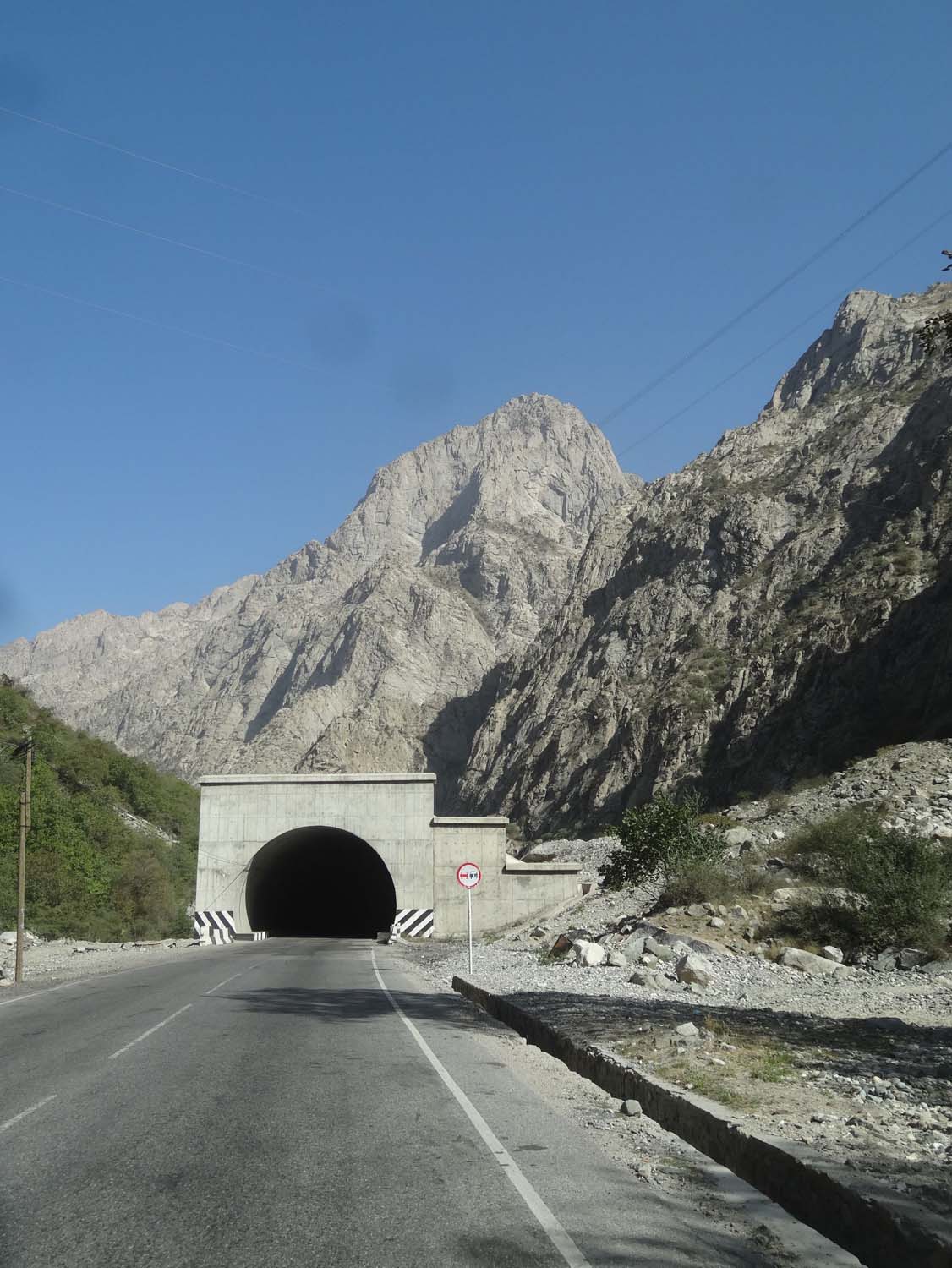 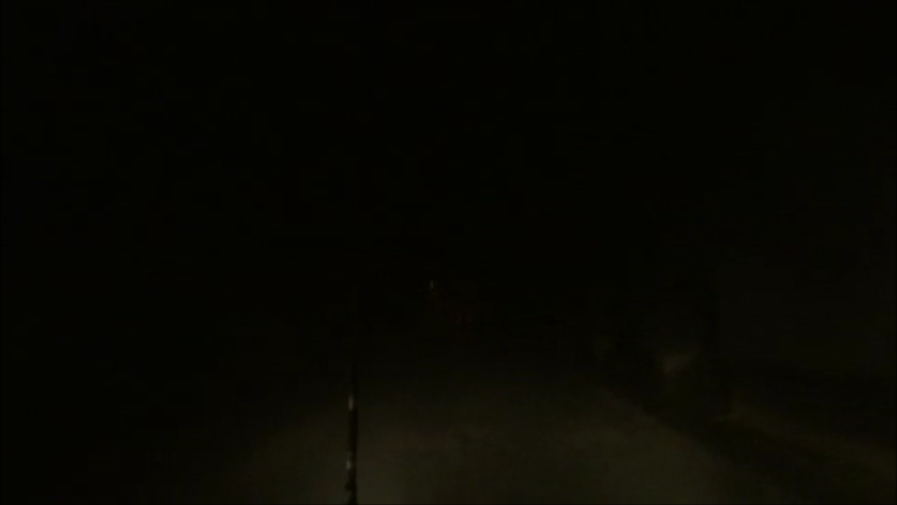 until you get inside! (can you see the taillights of the car in front of us?!)

Due to the lack of ventilation and the clouds of fumes coming out of ancient trucks you can imagine the visibility and quality of air. About halfway through we were getting nauseous and were feeling light-headed. And then we spotted one little reflector which turned out to be 2 men sitting next to an enormous puddle. Their job? Helping people safely through the submerged potholes…

We’ve never been so happy to see the light at the end of a tunnel, which by the way only became visible about 200m before we popped out into the fresh air so thick is the cloud of smoke hanging in the tunnel.

Soon we were sitting next to vibrant blue Iskander Kul lake, enjoying fresh air, lunch, a wash, watching a large bird of prey circling the rocks and some reading. It felt like a little holiday, until it was time to continue our journey to Penjakent and the Fan Mountains. Unfortunately this also meant turning off the smooth main road and turning onto yet another severely potholed dirt road. Jon was not happy. 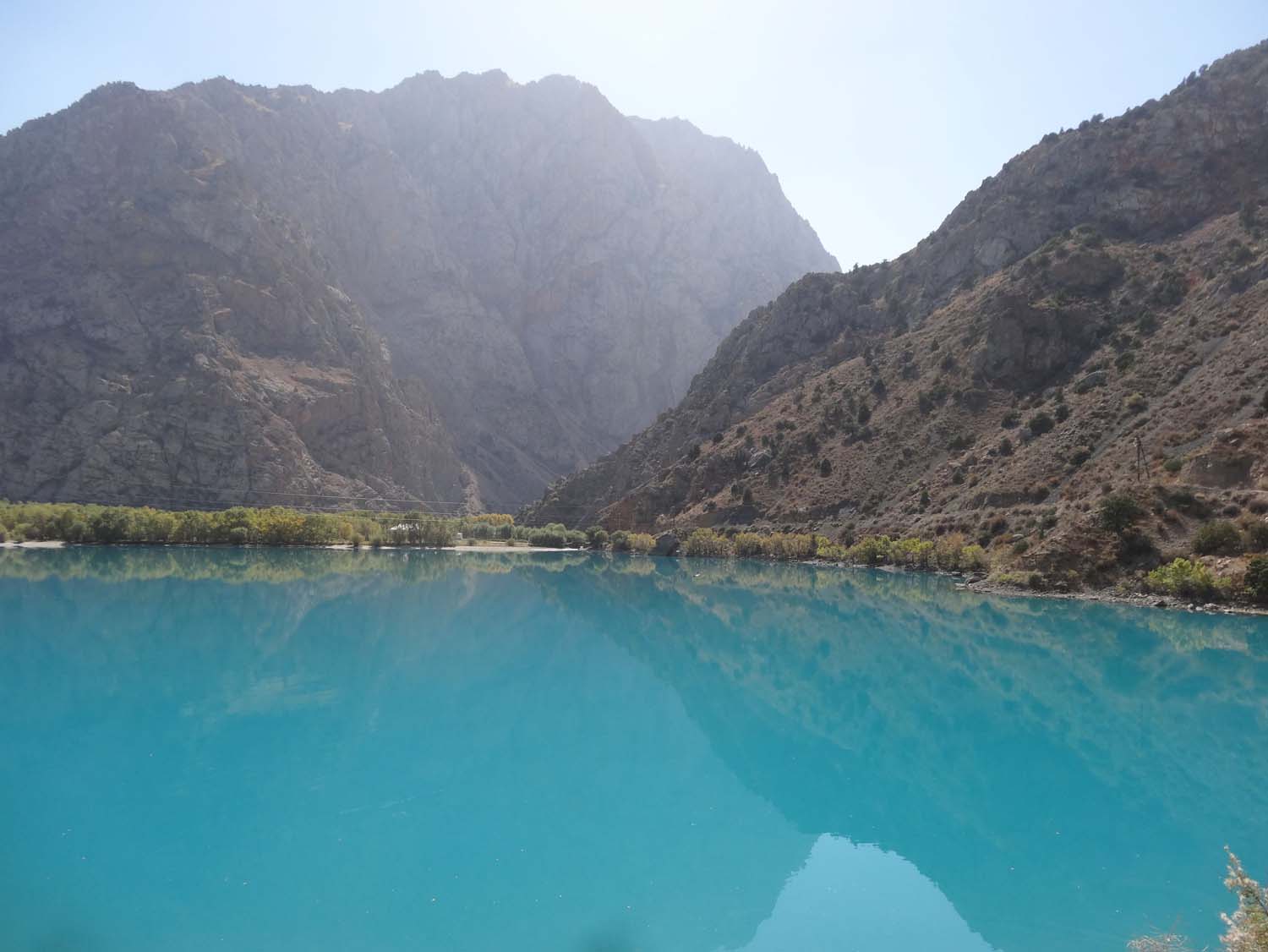 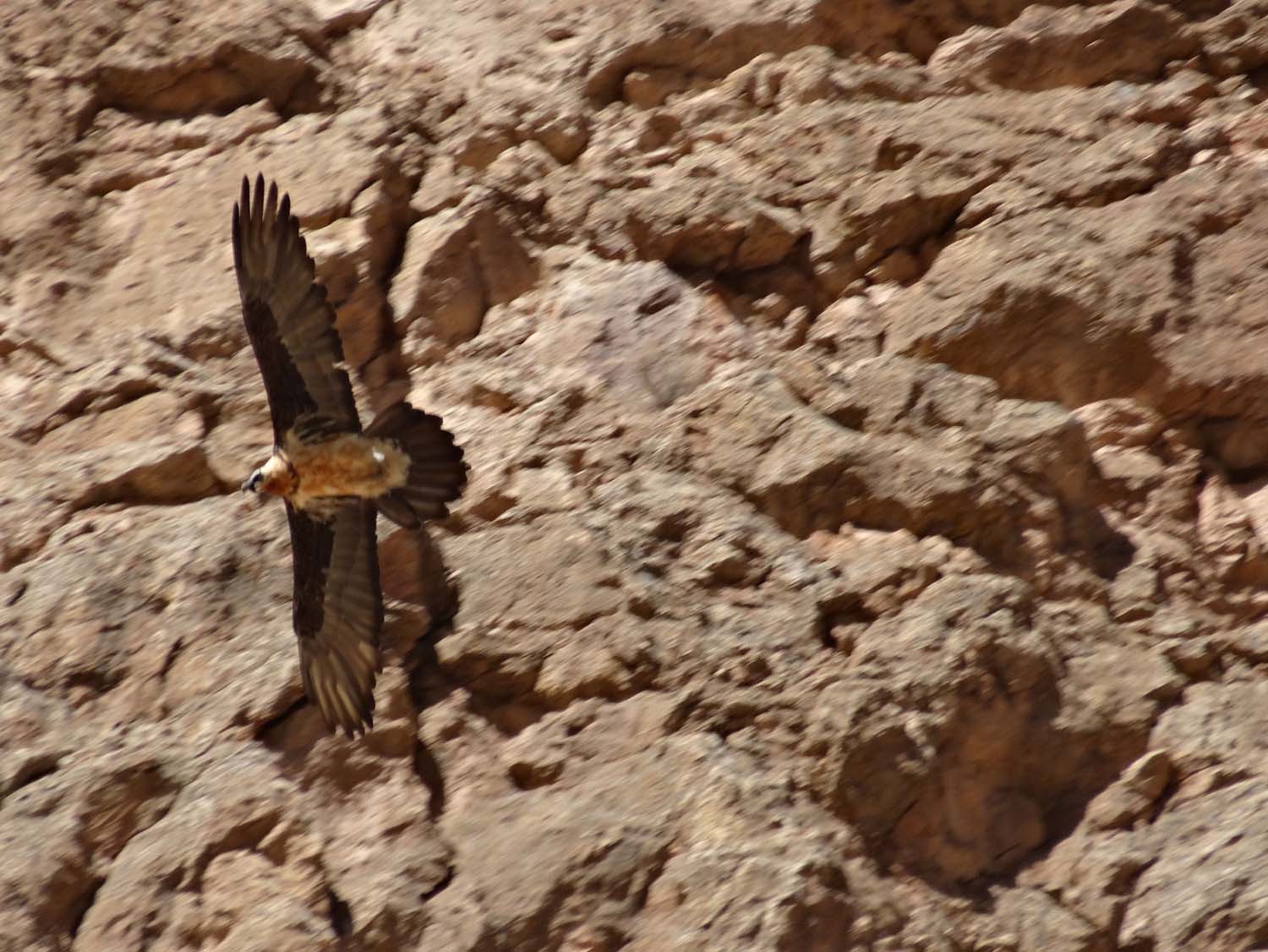 When we finally reached Penjakent, we had to look after Lara again. Over the past few days we had seen she was leaking a little bit from the diesel tank and with the bad roads continuing plus the fact there is hardly any diesel for sale in Uzbekistan, we wanted to fix it now. We found a garage with the help of the fantastic tourist information centre and they were soon removing the tank to have it welded. They also noticed the rear brake pads were virtually worn out and needed replacement, contrary to advice received by Land Rover in Almaty… We would need to find new pads somewhere, as they don’t sell Land Rovers in Tajikistan, or any other countries we were going to visit until Turkey.

We left Lara and took the bikes out for a spin to the ruins of ancient Penjakent, which we decided would make a perfect campsite for that night We had dinner in a great local shashlyk restaurant where they showed us all the salad dishes they had on a big plate so we could choose – perfect for Jude – and Jon was invited up to the shashlyk bbq to make his selection. When we had finished dinner we rode back to the garage and still had to wait another hour before they were finished. Again the garage had to stay open late for us, but that night we had our non-leaky Lara back, ready for Uzbekistan. 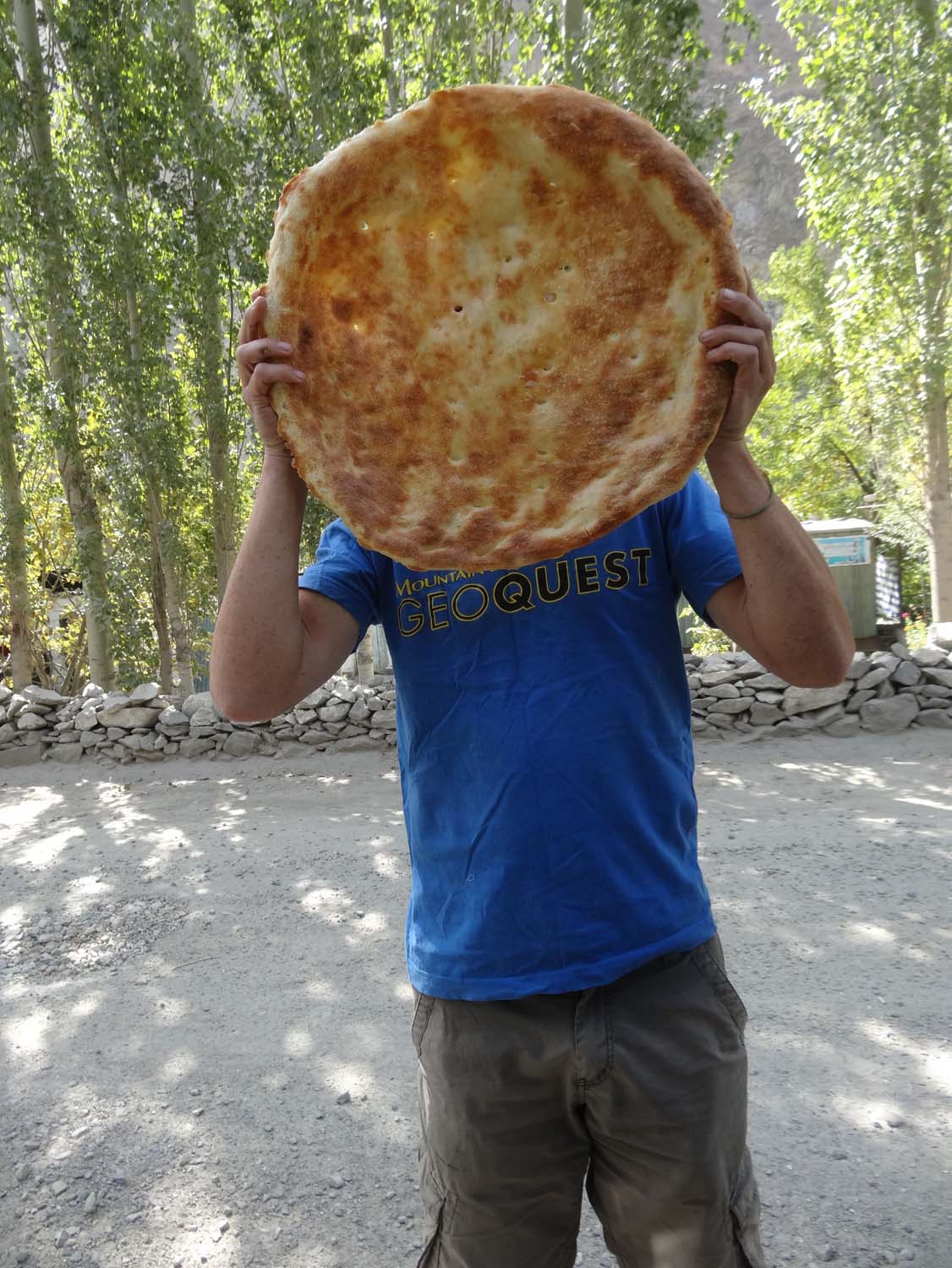 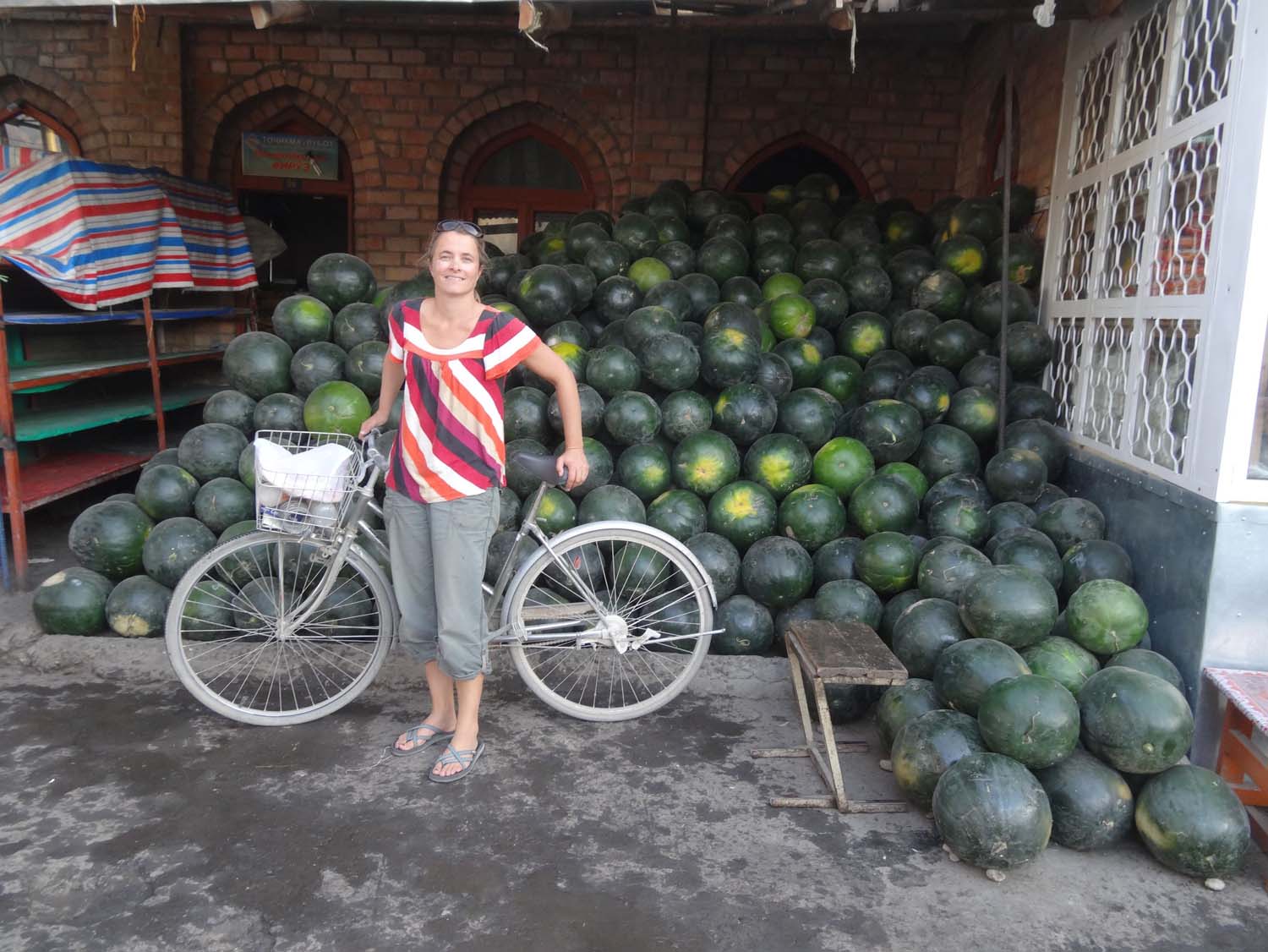 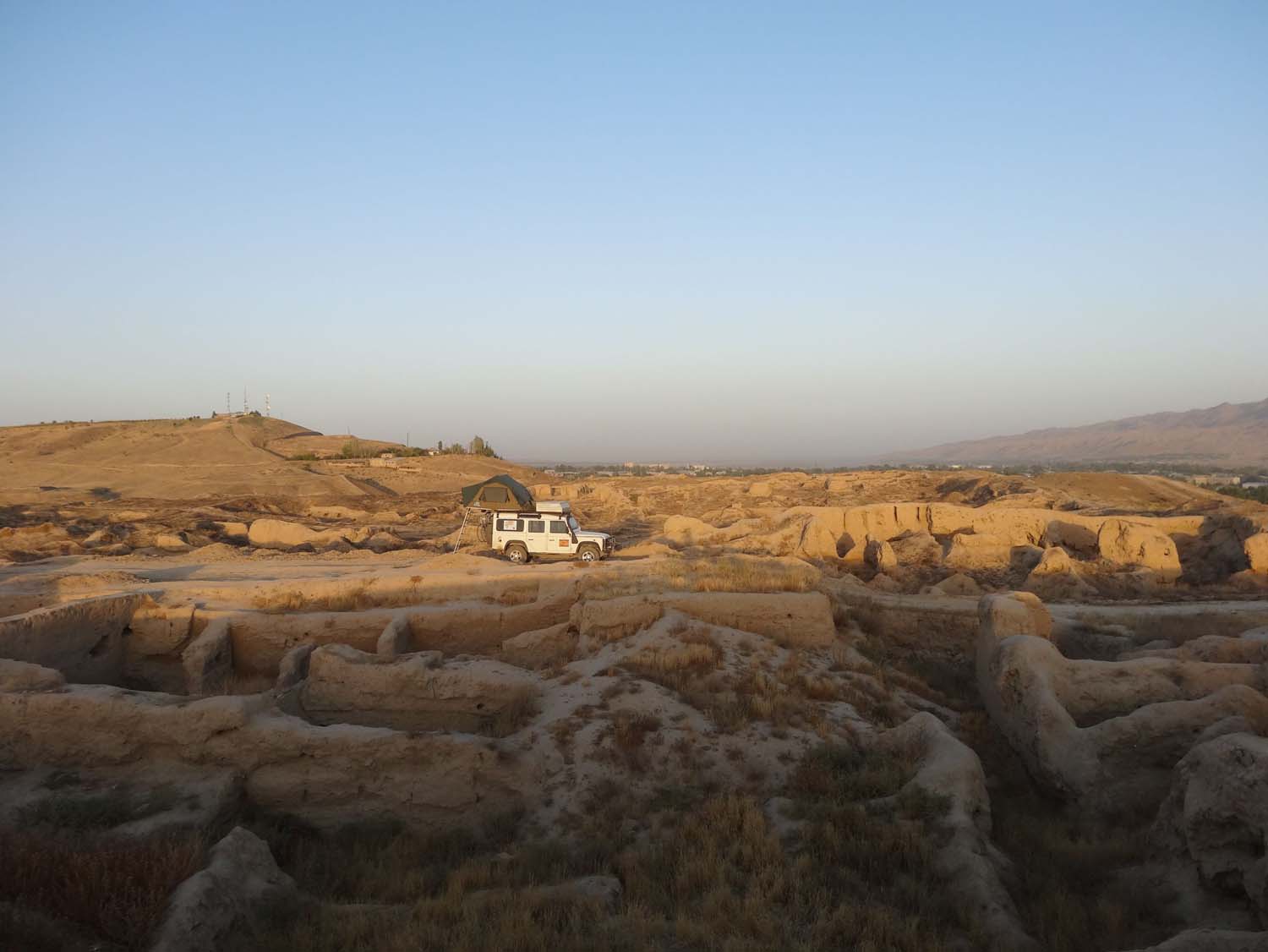 camping in the middle of the ruins of ancient Penjakent

We drove further towards the closed Uzbek border the next day as we were told there were some more ruins 15km west of Penjakent. Sarazm didn’t disappoint. The ruins of houses, shops, workshops and graves here are 5500 years old. Yep, that’s right, that is older than the Egyptian pyramids and nobody has ever heard of them. In fact, they don’t even get a mention in the Lonely Planet! They even found a mummy – ‘the queen of Sarazm’ – in one of the graves, complete with jewelry and pottery by her side. She is of course no longer there, but the sight was nonetheless very impressive. 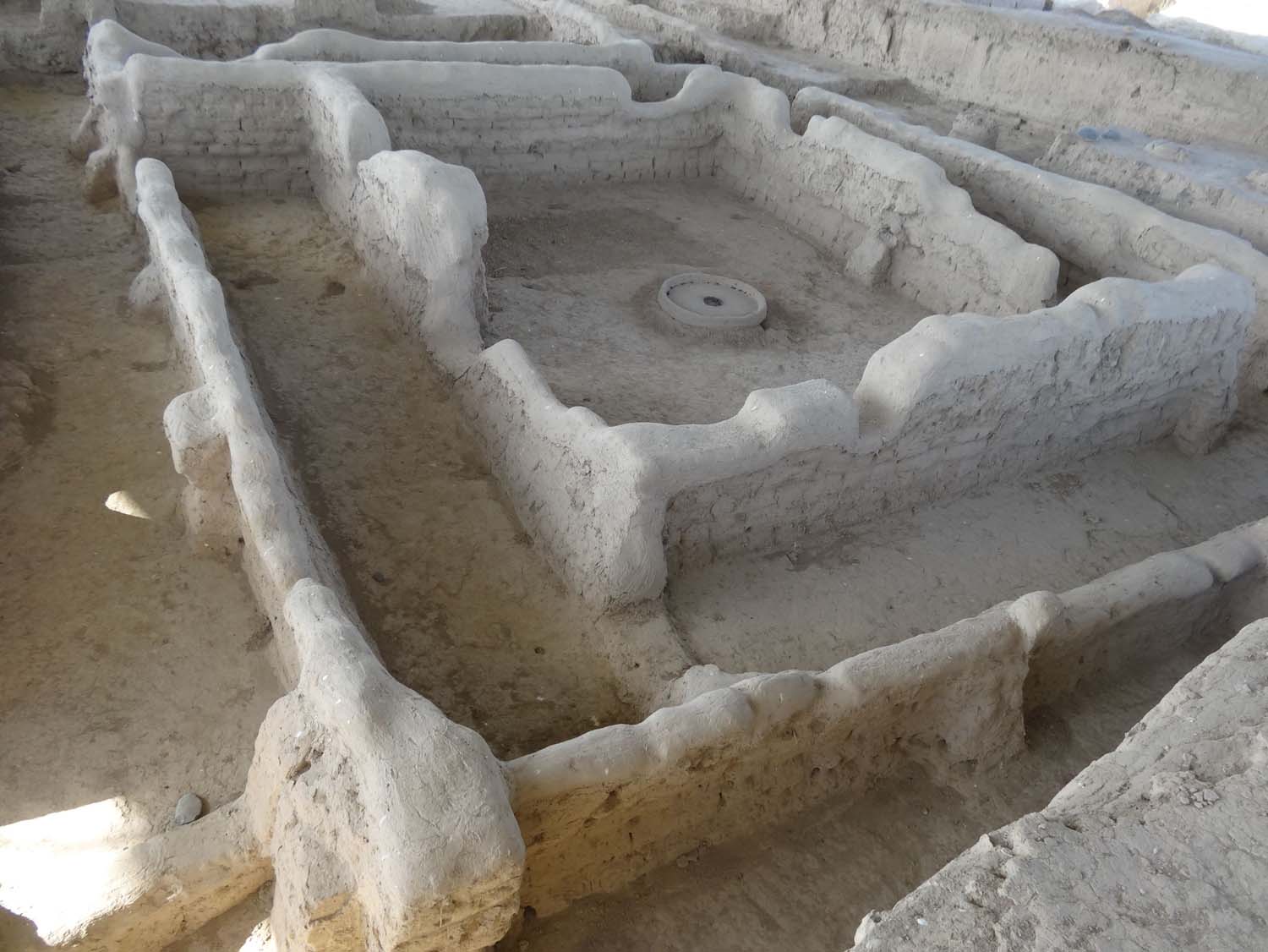