Lara doesn’t have feet, but she still needs a sock, just the one….

When you have a pop-top you need some way to close the gap between the walls and the roof when the roof is ‘popped’ and up. This is called the sock, and it is usually made of canvas, or a single layer of some sort of vinyl.

We wanted a sock that was insulated and at first struggled to find someone who could make it. We visited a shop on the Gold Coast, but they were doing socks just made of one piece of vinyl and were calling that insulated. Not good enough for us. We asked around a lot, and then Mark came to the rescue (wouldn’t be the first nor the last time). He had found a place on the Sunshine Coast called Cutting Edge Canvas.When Mark and Floss picked up their sock they came to Esk and we could actually see it and feel it. We liked it, it has 2 layers of vinyl around an inner layer of insulated foam, the silver shiny stuff, it feels really thick and solid. 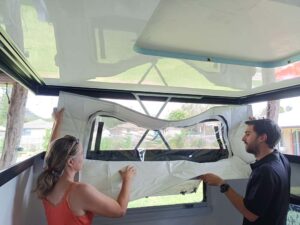 Mark and Floss pop into Esk and have just picked up their white sock for their truck. A perfect opportunity to have a look at it and see how it would look on Lara

We visited Mike and with his help we measured the exact dimensions for the sock and, most importantly, we picked a colour. And then we had to wait. Mike is super busy and it would be a few months before we drove back to pick up the sock. 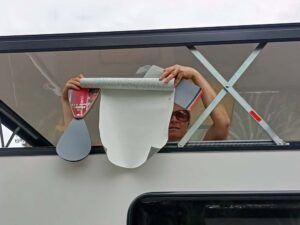 trying to pick a colour for the sock

When we finally picked up our sock we decided to wait a bit longer before putting it on. It was quite bright and easy to work inside Lara without the sock blocking the light. And as we were doing more and more jobs inside Lara as things were being glued down, and often we can’t take our work to the workshop anymore, good light was a bonus.

But, eventually the day came to put the sock in. Jon had pre-drilled holes in the pop-top extrusion so we could put tiny little screws in to make sure the sock wasn’t going to pop out with some major gust of wind. Most people don’t bother with that, but we felt it was a good thing to do. 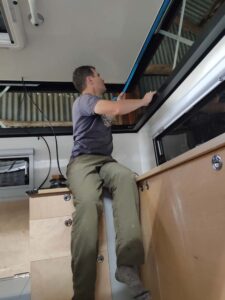 All we had to do was push the bead into the runners and screw in the screws. But of course it wasn’t as easy as that….. we struggled to get the bead of the sock in, getting some pretty sore fingers in the process. Eventually we managed to get the majority of the panels in, but we struggled with a few sections and really couldn’t get them in. After helping Mark and Kristy do theirs, we realised it shouldn’t be that hard and we contacted Mike. He was happy to do the beads of those tricky sections again and off we went on another trip to the Sunshine Coast. This time we stayed the night at Todd and Jenn’s place, enjoying a lovely dinner and sumptuous pancake breakfast before popping in to see new bub Harry at Jonno and Angie’s place. 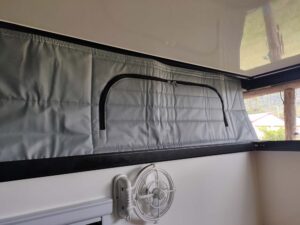 the first panel is in 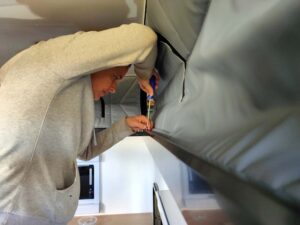 Jude screwing the sock in place 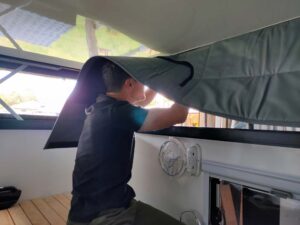 Jon adding some screws on the other side, we did the top section first where the screws are located on the outside

With the sock now securely in place, Lara’s build really is nearing the finish line…. 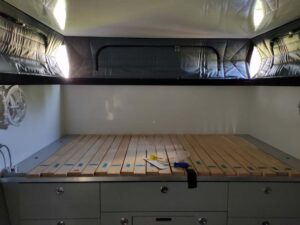 pretty much done, just close up the corners using the velcro strips and Lara’s interior is sheltered from the elements