When we arrived in Kenya many years ago now, Lamu was on the FCO’s (Foreign and Commonwealth Office) list of places that were considered too dangerous to visit. And as Jon’s employer followed the FCO’s decisions on this, we weren’t allowed to explore this beautiful little Swahili paradise during the time we lived in Nairobi.

Several months after we moved to Tanzania though, the FCO lifted this negative travel advisory for Lamu, and the plan was hatched to head up there to check it out. Our friends Helen and James, who live in Nairobi, always rave about the place so they were going to be our ‘local’ guides for the long weekend.

We were due to fly out on Friday morning, but when we checked in the day before, they had moved us to the afternoon flight, too late to connect with our flight to Lamu from the domestic airport! Jon received a call and was first offered a swap to the 3AM flight as the 9AM flight we were on was cancelled, not just overbooked. He managed to get us onto the 11PM flight for Thursday, which was great as we would arrive in time, but did mean we had to change our plans a bit and start packing early, and that meant straight away…

We caught up with Alex and Marcel for lunch and then we were on our way to Lamu. Lamu is actually an archipelago consisting of several islands, including Pate, Manda and Lamu Island. Pate Island is the largest of them all, but most tourists stay on Lamu Island.

The airport is located on Manda Island, and a few minutes after landing you are whisked away on a small, motorized dhow to Lamu Island. We weren’t staying in Lamu town however, but had booked a house in Shela, a smaller town within walking distance from Lamu Town, also on Lamu Island. It was a great choice. 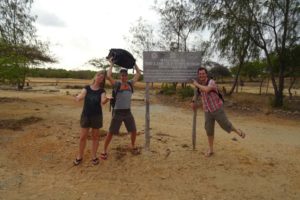 Helen, James and Jon have arrived at the Unesco World Heritage sign of Lamu… 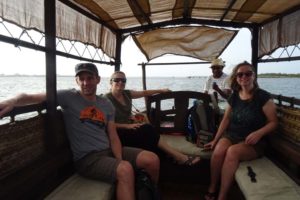 our taxi from the aiport to the house in Shela, a bit different from the usual taxis

After sundowners at Peponi’s, the local bar and restaurant only a stone’s throw away from our abode, we had a delicious home-cooked meal before we retired to the roof terrace. The houses here usually come with a chef who does all the shopping too, and Mwembe certainly was an excellent cook. In fact, his food was so good we decided to eat at home the next night too. 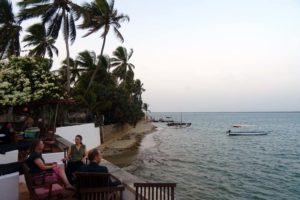 sundowners at Peponi’s, you can tell it is rather windy!

Of course we explored Lamu town, the oldest continually inhabited town of Kenya. They think it was originally set up in 1370, although all the current buildings are from later periods including the Lamu Fort which was finished in 1823. We enjoyed seeing an original Swahili House with the kitchen upstairs to ensure young kids can’t get to it, it even has enormous steps so they can’t climb up even when they are a little older. The fact they have a room completely dedicated to the beginning and the end of life seems a little wasteful on the limited space in the house, but we did like the way they made use of the roof terrace as an additional living space. 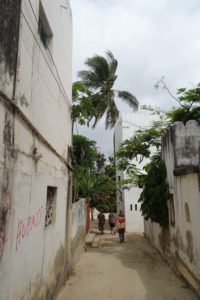 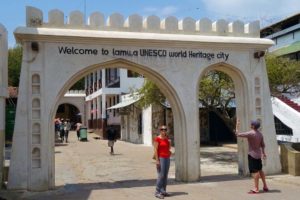 Jude has arrived at the Lamu Unesco sign in town 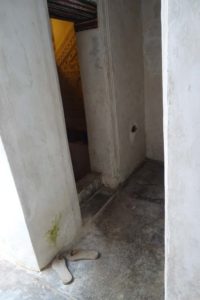 in a typical, traditional Swahili house there are special slippers for bathroom use, if there are no slippers, it means the bathroom is occupied, clever!

The best of Lamu Town are the narrow streets and the fact it is still very much a ‘working’ town. In that regard it is different to Stone Town on Zanzibar, which is also an old Swahili town, but feels more geared towards the tourists, although you can easily get away from that by wandering a little away from the main streets. Another difference between Stone Town and Lamu Town are the way the benches are set up in front of the houses. In Stone Town they run the length of the houses, and in some streets they can even be used as raised walk-ways when the heavens open in the rainy season. Usually though people ‘hang out’, chat, rest or play a game on them. In Lamu Town they are all just in front of the door, like a little room, where you can relax and sit down after you knocked on the door. They don’t seem to be used very much there.

But in general the two towns are quite similar. Beautiful wooden front doors, outdoor lifestyle, friendly people, good food, stunning architecture and plenty of narrow, winding streets to get lost in. We enjoyed our walk with our guides Helen & James, found an excellent café for lunch and a fresh coconut along the way. And when Jude’s handbag strap broke whilst chatting to a craftsmen about his intricate wooden chairs and other furniture, we were quickly directed to a tailor, who brought us to a shoe repairman. Five minutes later the bag was as good as new, and another 10 minutes later change had been found to pay for it. 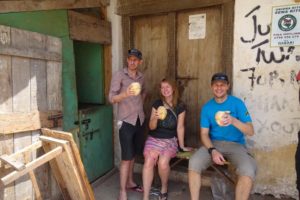 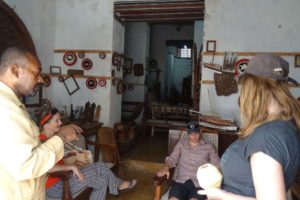 Omar the craftsman explaining stuff to Jude, James and Helen in his workshop in Lamu town 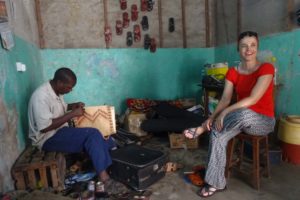 It was a very relaxing weekend, and it is no wonder people stop in here after a safari and before flying home. Especially if you head to Kenya in the winter of the northern hemisphere… ! 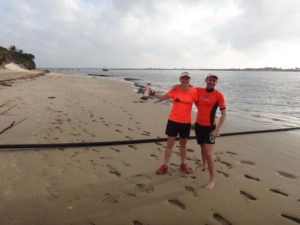 team orange goes for a run (Jude) and a swim (James) 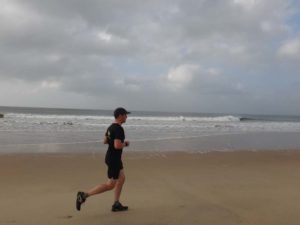 Jon on our morning run on the long beach 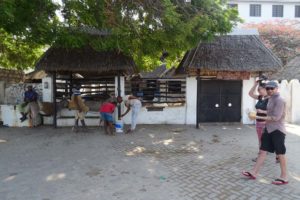 there is a donkey centre on Lamu, but we still see quite a bit of abuse in the few days we are there 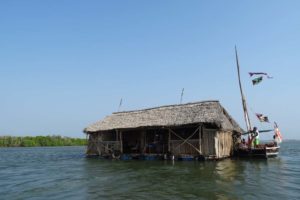 in between Manda and Lamu Island is a floating bar where we popped in for a quick drink, looking at the fish and enjoying the views 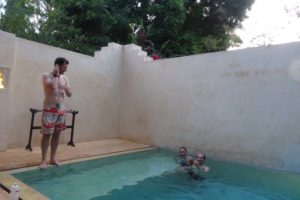 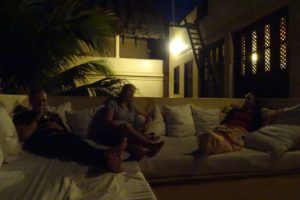 sundowners and stargazing on our roof top terrace 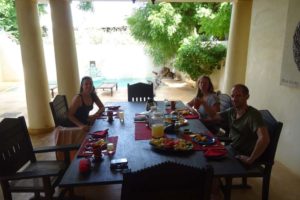 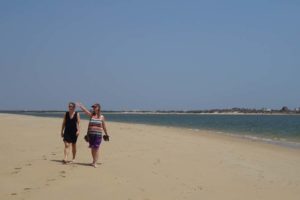 Jude and Helen on Lamu beach 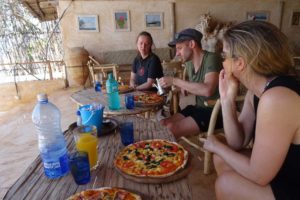 Helen, James and Jude having lunch on Manda Island 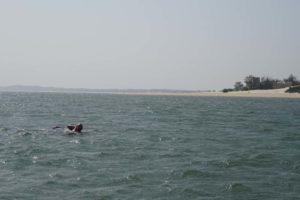 Helen & James swam across the channel, but as it is a bit cold for us compared to Dar es Salaam, we opted to hop into a little dhow to get us across 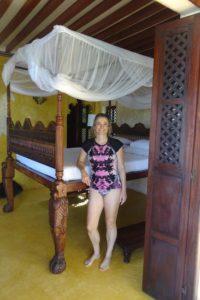 this is the height of our bed in Shela… you need a step to get in!