We wanted to share a weekend away with our best friends as our farewell to Kenya. Little did we know when we planned this trip that we would have quite a few more weekends away with them before we were actually leaving…

We booked Pelican House, a beautiful place overlooking a waterhole inside Ol Pejeta conservancy and coordinated carpooling for the ride up, early on Saturday morning. There was of course a compulsory stop at Barney’s en route. Coffee for some and a second breakfast for others.

On arrival we all noticed the plane sitting at the entrance of the airstrip, Barney’s is right next to the Nanyuki airstrip, and wondered why there were so many people gathered around the open cargo door of the aircraft. But we sat down and ordered until a few minutes later we spotted a keeper walking past! Keepers from the David Sheldrick Foundation’s elephant orphanage are easily recognisable by their green overcoats and this instantly got our attention. Would there be a rescued baby elephant in that plane?

We got up to investigate and soon found out that yes indeed, a baby elephant was already on board, ready to be flown to Nairobi’s elephant orphanage. Our request for a quick glance was met with an ‘absolutely not possible’ at first, until one minute later we did get permission! We all had a look at the one year old female elephant who had been found without a mother on the lower slopes of Mt Kenya, after the weekend we found out she had been named Tagwa. She was of course sedated and oblivious to all the action around her and soon they were closing the doors and off they went, straight to Nairobi where she would be introduced to her fellow elephant orphans and of course the keepers who do an amazing job teaching these babies everything they need to one day go back to being a wild elephant again. We are all planning to adopt her as soon as we can. 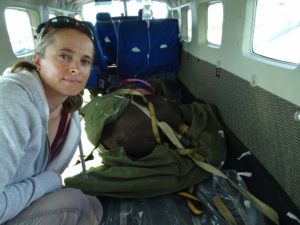 After that excitement we continued to Ol Pejeta with a quick stop at the Nakumatt supermarket so Hafiz could buy some cream for his dessert, and discovered they were working on the access road and we had to slip and slide through the huge mudpit they had left for us… With our 4wd this shouldn’t be a problem, but as our tyres are almost bold we ended up sliding all over the place and with the help of some pushing got back on the right track again and finally made it to Ol Pejeta. A bit muddier than before and minus James’ thongs.

After paying our entry fees and Helen buying the official bird and animal spotting list, we had our compulsory stop at the equator sign for a group photo. A shame that Marcel and Katharina weren’t there yet. 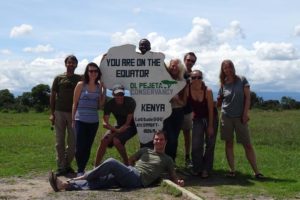 the crew minus Marcel and Katharina at the equator sign: Hafiz, Eva, James, Hervé (behind the sign), Jon (on the ground), Anne-Marie, Gerald, Jude and Helen

Another stop was made at Baraka, the blind black rhino. He loves a treat of sugar cane and being scratched behind his ear by Jude, which yet again elicited an excited reaction… 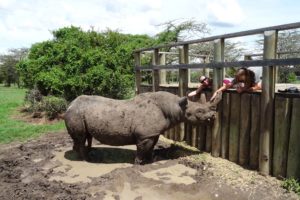 On our way to our accommodation for the weekend, we already spotted both white and black rhino and many other animals. Ol Pejeta never disappoints. Pelican House is a lovely old cottage with a great deck overlooking the waterhole and we quickly organised lunch before watching Hervé trying to put a chair up. It was quite entertaining seeing Anne-Marie, Eva and Helen already sitting in the same style chairs whilst Hervé couldn’t quite get the hang of it. 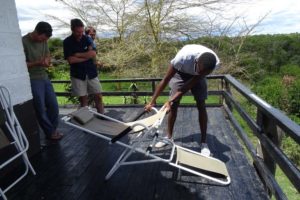 Hervé showing his amazing skills to put a chair together 🙂 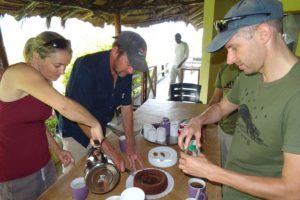 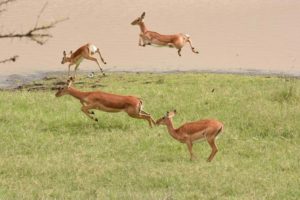 We went on a long afternoon game drive, only occasionally having to turn around because the tracks were impassable after the rains, enjoying all the animals, including some new bird species! 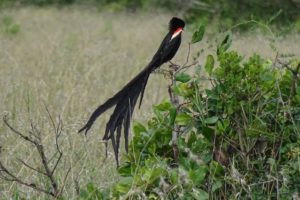 one of the new bird species for us: a beautiful male long-tailed widowbird, its tail is between 60 and 70cm long!!

After a late potluck dinner with way too much food we sat in front of the huge fireplace, enjoying the great selection of booze and swapping tales. We will definitely miss this great crew. 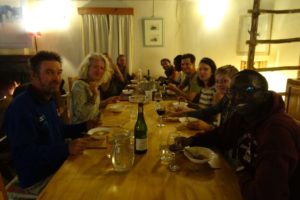 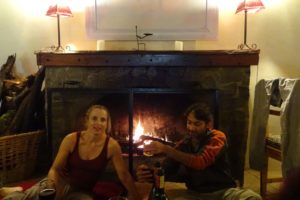 drinks by the fire 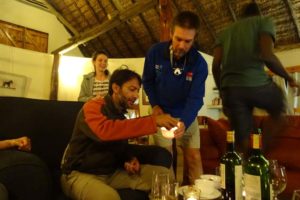 Hafiz and Gerald trying to light the ‘huhuma’ balls 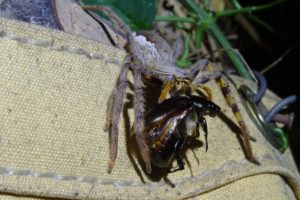 this beautiful spider (some sort of huntsmen?) got himself a nice meal with all the beetles flying around the lights

The next morning only 4 people got up at the obligatory crack of dawn for the morning game drive, the rest still snoring away in their beds as we left. We were rewarded with a stunning view of Mt Kenya in the background and a few lionesses in the foreground, a crash of rhinos (yes, really) and the other usual animals. That was until we got a call from Marcel. Marcel and Katharina had also gotten up early and gone for a drive with Katharina’s small 4wd. They had taken a little track off the main road, near Pelican House, right where we had seen the lions earlier that morning, and had gotten stuck in the mud! 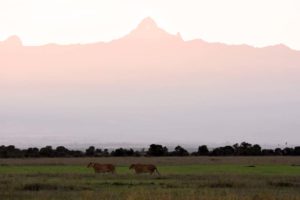 2 lionesses on their way to a quiet spot for their beauty sleep, Mt Kenya in the background 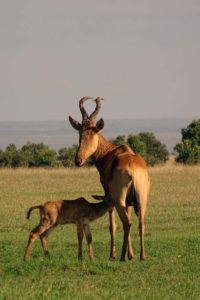 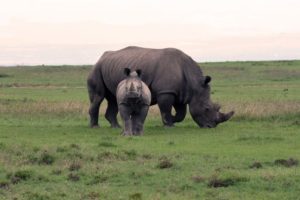 They didn’t want to call people in the house as they thought they would still be sleeping, but we were on the other side of the conservancy and at least an hour’s drive away. They tried Gerald after 8am who hung up on them thinking it was a Sunday morning work call – not interested in working on Sunday morning, obviously.

So after an hour of waiting and a few more phone calls to try to determine where they were exactly, we found them. Katharina covered in mud and Marcel squeaky clean. We got the Maxtrax out (sand ladders) and with some additional pushing we got the little car out, but not until Katharina had another shower of mud. Well delegated Marcel. 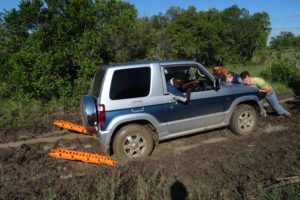 Hafiz, Katharina and Jon pushing Katharina’s car out of the muddy pit 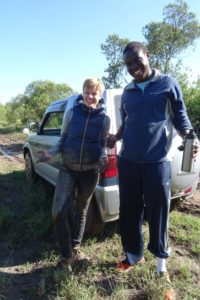 Katharina and Marcel, spot the one who did all the hard work to get the car out…

The rest of the weekend was spent eating, more game viewing and more eating before driving all the way home again. It was a memorable farewell weekend to Kenya, we will miss our new found ‘home’, but even more so we will miss our new friends. A crazy bunch who are always up for anything adventurous, just how we like our friends 🙂 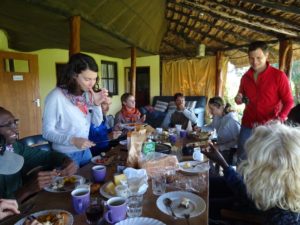 we did a lot of eating delicious food that weekend, this was lunch 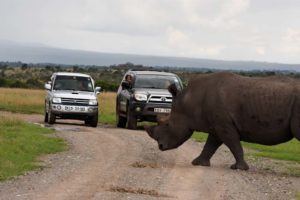 a rhino crossing in between our cars makes you realise how big they are! 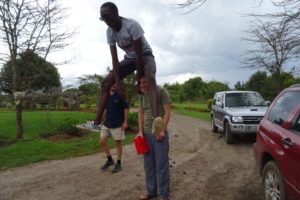 Thanks Anne-Marie, Eva, Gerald, Hafiz, Helen, Hervé, James, Katharina and Marcel for a great weekend we will always remember! And thanks to Kenya for providing such a beautiful backdrop. 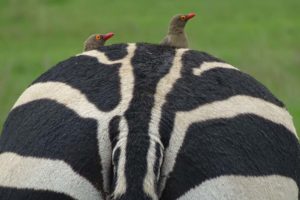