The Anzac long weekend was spent in the Kalbarri gorge with Kathryn, Dymph and Graham. A long weekend meant we could drive a bit further so we decided to hike the Kalbarri gorge. Kathryn, Dymph and Graham were also keen, so we had our little party leave Perth on Friday afternoon. We left just after 4pm as it was going to be a long drive and car shuffle when we got there.

Along the way we had a few stops to buy the most essential bits of the trip: a 1l tub of Connoisseur icecream (Chocolate Obsession of course), some petrol and a couple of bottles of wine. With the shopping done, all that was left was the car shuffle. We dropped our packs off at Ross Graham’s carpark and all drove to the end of our trip: Z-bend. We left Kathryn’s car there and all hopped into Graham’s car for the drive back. 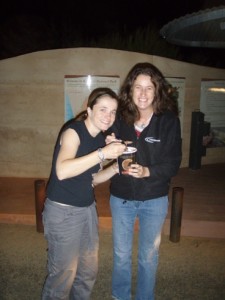 the essentials for a hiking trip – tub of ice cream!

There were heaps of kangaroos on the road and although we were driving slowly, one decided to jump in front of the car and do a somersault over the roof of the car! It was a bit dazed and disoriented when it landed on the tarmac, but after a few panic leaps it disappeared off into the bush. No blood on the car and we couldn’t find it anywhere so we’re hoping it was alright. Great way to introduce Graham & Dymph to the Australian bush and its wildlife! They got a good close up of a kangaroo 😉

Picking up our packs back at Ross Graham’s carpark we quickly started hiking down as it was quite cold at this point. We soon warmed up on the easy track down and found the river flowing when we got to the bottom. Jon found a spot to cross and we all hopped across without getting wet feet. From there it was a short walk to the first camp ground. The same spot as I camped a few years ago – a beautiful sandy beach with some big river gums and a lovely red cliff face on the other side of the river. It was 3AM when we finally got to bed! 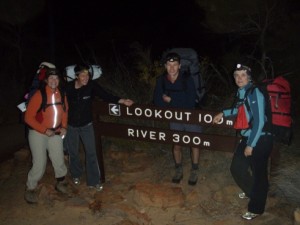 ready to go in the car park

The next morning we were woken up by the sun as it was heating up our sleeping bags. To travel light we had decided to only bring one emergency tent between us and sleep out under the stars. The night was cold and very dewy, but it was not too cold. After a relaxed breakfast we started our hike and soon found we had to cross the river again. This time we decided to take off our boots and wade across – it was the easiest way and also very nice and refreshing as it warmed up nicely in the gorge once the sun was out! 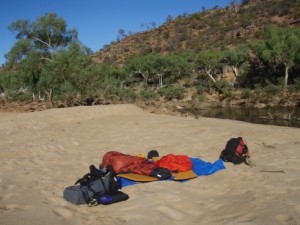 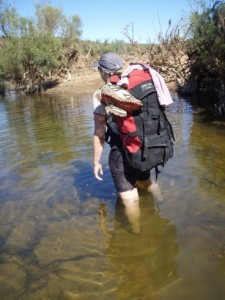 plenty of water in the gorge, unfortunately all salty so not good for drinking 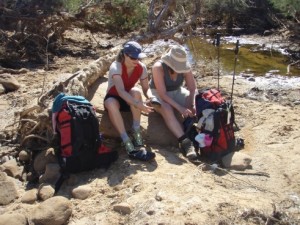 putting shoes back on after the crossing

The rest of the day we hiked, rested, had a nice lunch along the river in the shade and generally enjoyed our packs getting lighter as we were drinking away the kilos of water. It is rather ironic that we had to carry our water with a flowing river right next to us. Unfortunately the water is salty (saline watertable) and even when the river is flowing it is too salty to drink. 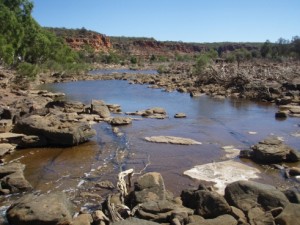 the sensational rock of Kalbarri gorge 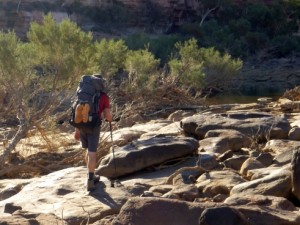 Jon walking down the gorge, there is no trail marked

Around 4pm we found another lovely beach for our camp that night and decided to stop early and enjoy a swim. The water was a bit nippy at first, but once you were in, it was very enjoyable. Dymph was definitely the fish in our group! 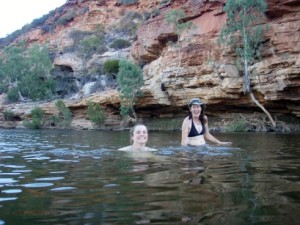 Time for a glass of wine and some gourmet cooking after the swim before going to bed early (around 8pm). Again we enjoyed the stars as our ceiling. It is so nice to watch the shooting stars before closing your eyes and falling asleep after a long day of hiking. The next day can pretty much be told by the pictures. Another amazing day of hiking through beautiful scenery. We had a swim at lunch time and even spotted a turtle on our walk! 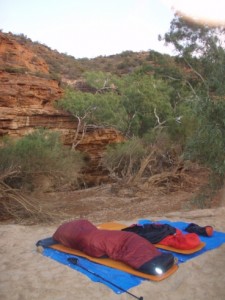 yes, that is Jon somewhere in that sleeping bag 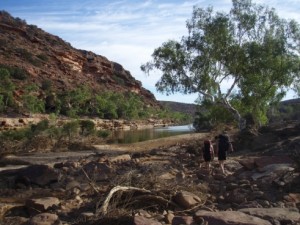 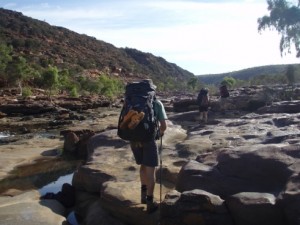 we continue our hike downstream 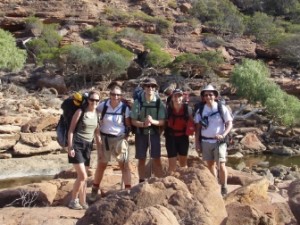 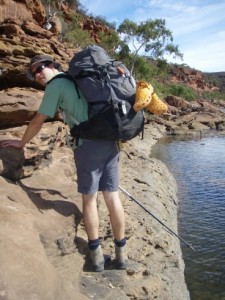 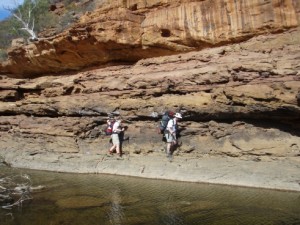 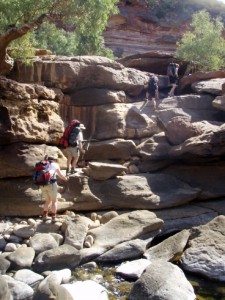 occasionally we have to go up

another swim at our lunch stop 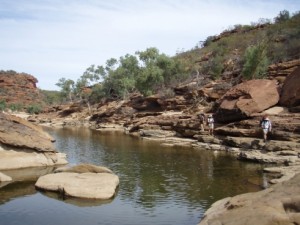 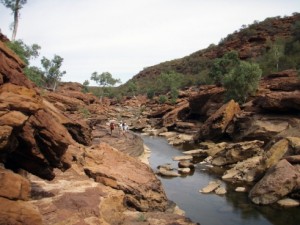 the river is narrow in some places 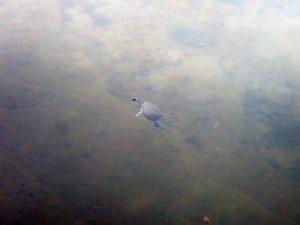 we spot a turtle! 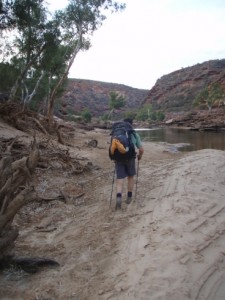 nearly at our campsite

But then, just as we were getting very close to our campsite for the last night, disaster struck. Dymph slipped and fell with her head on a sharp rock. We pulled out the emergency first aid kit. Stopped the bleeding and decided what to do next. As we weren’t carrying a sat phone we had to get out of the gorge to alert the rangers. We decided to pitch the tent, Graham and Kat were going to stay with Dymph and Jon & Jude were going to hike / run out of the gorge as fast as possible, pick up the car we left at the end and drive into town to find the rangers. We’ll let the report tell you the rest of the story:

Do not under any circumstances discuss or admit responsibility or liability with the other parties or any witness. Advise all parties that the matter will be referred to SOHQ.

Name of injured person or owner of damaged property: Dymph

How did the injury or damage occur:

Dymph was hiking with a group of four other people from Ross Graham to Z bend – and was into the second day of this planned 3 day hike when the accident occurred. At 16.30 hours, while walking along a rocky, boulder strewn terrace on the eastern side of the Murchison Gorge, Dymph tripped and fell a vertical distance of about 0.6m, striking her head on a sharp rock.

Details of injury or damage:

Deep cut and lacerations to the left side of head – just above temple and towards front of head.

Details of any action taken to help minimise and contain any further injury or damage:

First aid was immediately rendered to Dymph by members of the hiking party with sterri strips and bandages used to stop the blood loss from the wounds – which were bleeding profusely. Dymph was also showing signs of shock and was pale and feeling nauseous (as advised by Jon). She did not loose consciousness during the incident.

A tent was erected and used to provide shelter for Dymph. Two members of the party (Graham and Kat) remained with Dymph while two members (Jon and Jude) hiked out to Z Bend (commencing at 1700hrs approx) in order to raise the alarm. Jon & Jude picked up their vehicle from Z Bend carpark at approximately 20.30hrs and drove it into the Kalbarri National Park Headquarters and phoned senior Ranger Mike on mobile phone; time 21.30hrs.

Mike then advised Kalbarri Police (Constable Simon) and the Kalbarri SES (Ron); the SES was requested to contact members in readiness for a possible gorge rescue. The Kalbarri Health Centre was also contacted by Kalbarri Police. Mike then picked up ranger Russell and met up with Jon and Jude at the Park Headquarters where maps were produced and GPS location of injured person was plotted. Kalbarri Health Centre advised Mike that Nurse Tracy and visiting locum Doctor Klaasje would be made available to attend the injured person.

Other Park staff, Danny and Michael, were requested to remain on standby. DEC Regional Operations Officer Nigel was contacted by Mike and advised of situation.

DEC staff then drove to Kalbarri Health Centre at about 22.20 hrs approximately with John and Jude – where John and Jude discussed accident details and patient’s condition with Doctor Klaasje and Nurse Tracy. Medical supplies and equipment (including stokes litter and Furneaux) were loaded and DEC staff (Mike and Russell) then drove the two medical staff (Tracy and Klaasje) and John and Jude to the Little Z Bend car park, arriving at about 00.30 hrs. Mike contacted Kalbarri SES (Ron) and DEC Midwest (Nigel) via satellite phone to advise of progress. This group of six people (2 DEC staff, 2 medical staff, 2 hikers) then hiked into the gorge from the Little Z Bend car park, arriving at the injury site at 02.00hrs approximately.

Klaasje and Tracy attended to Dymph and made a thorough assessment of her condition. Klaasje advised Mike that there was no immediate urgency to evacuate Dymph and that it would be best if she remained resting and under observation overnight and her condition be reassessed at first light.

Mike then advised same to Ron via satellite phone (02.30hrs) and advised that an SES stretcher rescue may be required early next morning subject to the Doctor’s advice; Nigel also advised.

The group remained in the gorge overnight and Dymph was examined at 06.00hrs the next morning. The Doctor advised that the patient’s condition was sufficiently improved such that she should be able to hike out of the gorge slowly and with assistance, without the need for a stretcher carry. The camp was then packed up and the group made a slow return to Little Z Bend car park with frequent rest and reassessment stops on the way to continually monitor Dymph’s condition. The group arrived at the car park at about 09.30 hrs and arrived back in town at about 1100hrs where Dymph was taken directly to the Kalbarri Medical Centre.

Any other relevant information: 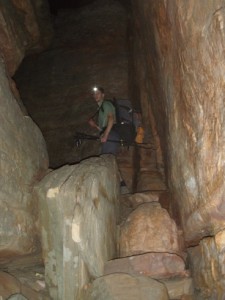 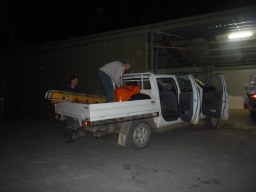 getting ready to head out again with the doctor, nurse and rangers 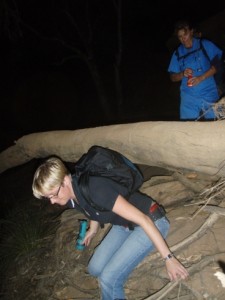 Doctor Klaasje and the nurse hiking back into the gorge 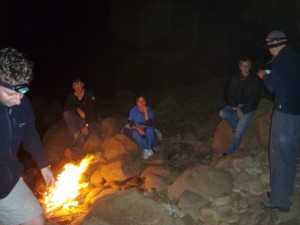 the rangers build a fire to keep us warm overnight 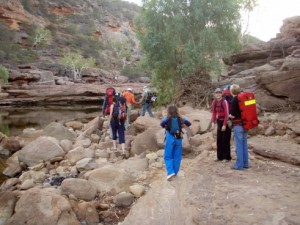 the next morning Dymph is ok enough to slowly walk out 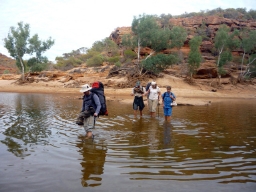 we have to cross the river 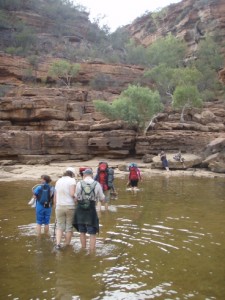 Dymph is supported and makes it across without any problems 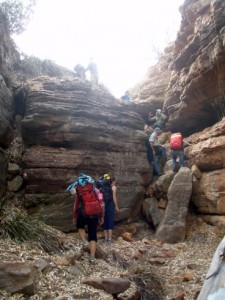 and then out the narrow side gorge 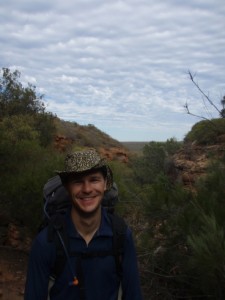 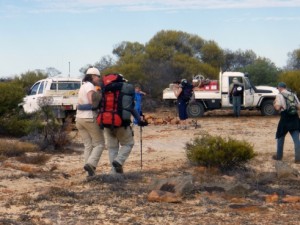 we make it ok and get back to the cars 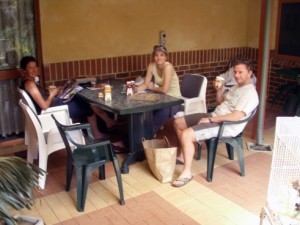 Dymph was all fine and released from hospital the same day. And luckily she loved the hike and was not put off by her fall to continue hiking!