This story starts a long time ago. I guess it started already when Jon decided as a teenager that he wanted to see the Rolling Stones in concert.He may have missed several opportunities from that time onwards, including when they were playing almost right outside his doorstep when he was living in Den Haag, Holland. But this story really started in 2013, on our year off when we drove from Malaysia to London in Lara (our trusty Land Rover 110).

We were driving through Kazakhstan when we saw on facebook that Scooby had bought tickets for the Rolling Stones concert in Adelaide. Knowing Jon really wanted to see them in concert, Jude asked Scooby if there were still tickets for sale. As he had bought two extra we bought them off him and were planning on joining them for the concert.

Fast-forward several months and we were already back in Australia. The band had arrived in Perth for their first concert, and then the unthinkable happened. Mick Jagger’s girlfriend killed herself, everybody flew back to the UK and all concerts in Australia were cancelled.

Not to worry, the tickets would remain valid and all concerts would be rescheduled. So we kept the tickets and waited.

Fast-forward another few months and Jon was offered a job in Nairobi, Kenya. We would fly out on Jude’s birthday at the end of September. Some time after Jon was offered his new job, the Rolling Stones announce their new concert dates. They were in October…

After much deliberation, we sold our tickets to Angie’s parents who had a great time, and Jon was forced to keep this item on his bucket list.

Some years later Jude reminded Jon of this particular bucket list item as the clock is ticking for these boys. It is a miracle they are still playing together and are all still able to tour. One day they won’t be able to do this any more and then it would be too late.

Jon checks their official website and finds nothing scheduled, he downloads the Rolling Stones app and then forgets about it again. But, a few days later a notification from the app pops up. A new European tour is announced and tickets will go on sale soon. That day arrives and Jon is super excited and buys two tickets for the concert in Amsterdam. Only after he bought them does he realise it clashes with the Rift Valley Odyssey, a multi-day mountain bike ride in Kenya we had already signed up for!

We desperately try to get tickets for the concert in Arnhem and in the process manage to purchase another four tickets for Amsterdam…! (don’t ask) But in the end we finally manage to buy two tickets in the grand stand for Arnhem on 15 October.

We flew to Europe on Thursday evening, landing in Birmingham the next day where Jon’s dad picks us up. Andrea (Jon’s cousin) as well as Claire (Jon’s sister) & Russell with Olivia and Sophie all arrive the next day to celebrate Ian & Bernice’s golden wedding anniversary. 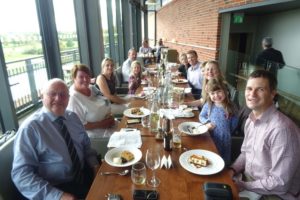 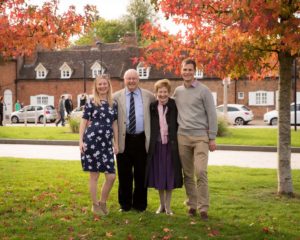 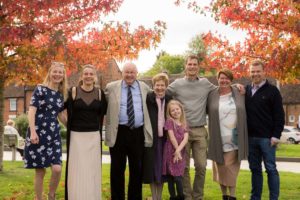 And then, finally, Jon can tick this item off his bucket list. We arrive in Arnhem and make our way to the Gelredome. He buys the obligatory t-shirt and after all those years he can see, and hear, them play live. It’s not every day that a dream comes true.

It really was a fabulous concert – they played all the hits, including personal favourites ‘Honky Tonk Woman’ and ‘Sympathy for the Devil’, but what was really good to see was that they really enjoyed playing and were grateful that everyone still showed up to see them! 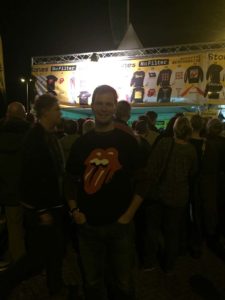 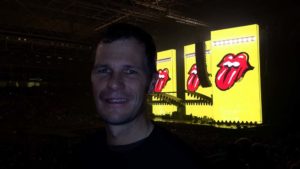 Jon waiting for the Rolling Stones to come on 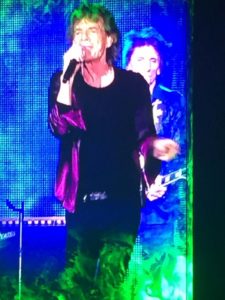 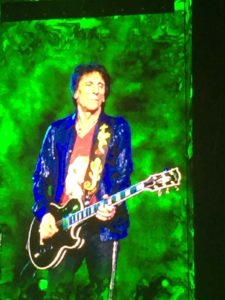 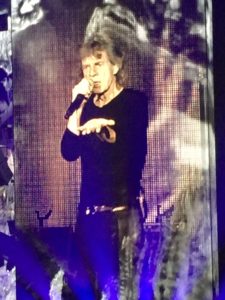 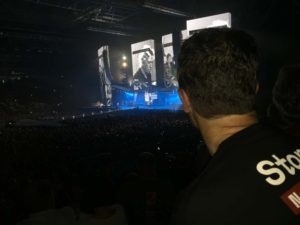 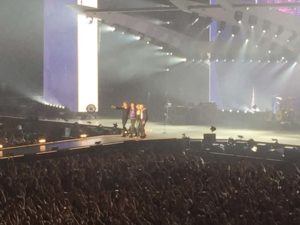 The rest of the week Jon works from the office in Den Haag and Jude catches up with friends and family. We spend a day in Antwerp in the Comic Station with mum and dad, Sandra & Peter, Jessie, Niels and Jens, followed by a great dinner, before we have to fly back to Dar again. 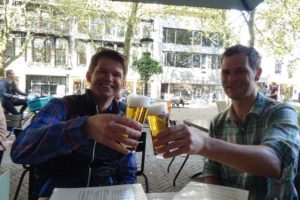 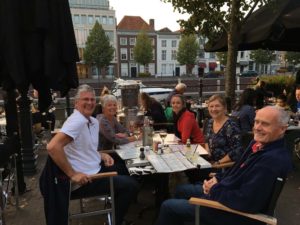 catching up with Hans and Dini in Breda. They had cruised there with their boat and were spending a few nights in town. You can just see their boat in the harbour behind us 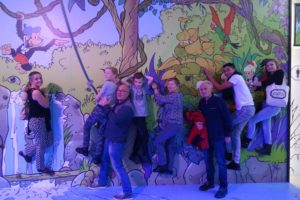 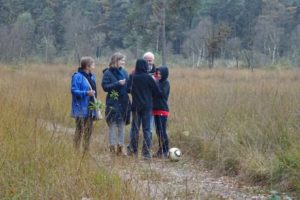 mum, Sandra, Niels, dad and Jens having a giggle 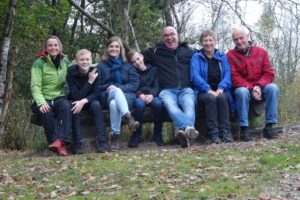 Jude, Niels, Sandra, Jens, Peter, mum and dad on the walk before dinner. Jessie and Jon joined for dinner too

So that’s one item ticked off Jon’s bucket list, now we’ll start on the next one!