As most of you will know, you cannot normally get us into a shop, unless they sell mountainbiking or kayaking stuff, running or hiking necessities, camping equipment or other outdoor related gear. We get grumpy if we have to go to a shopping mall and usually get lost within 5 minutes – do they make these places impossible to find your way round on purpose? If one of us needs clothes it usually ends in an argument of some sort, usually about something completely unrelated. Groceries are purchased as fast as possible, with a list, and preferably only once a fortnight. I think you can safely say we are not the type who go shopping for fun.

But in Iran we loved shopping. We loved the bazaars and spent hours exploring. Browsing the various stalls, talking to the owners and other friendly shoppers, and even entering shops just to check out what they sell. And although the Lonely Planet always warns that the huge bazaars can be overwhelming and disorientating, we never lost our way. Sure we found some dead-ends, but we generally knew where we had entered, were always able to find our way back or out and simply enjoyed the winding, narrow streets lined with stalls selling everything imaginable (sanctions don’t limit what you can by, it just affects the price).

Every tiny corner is used to sell things and the variety is staggering. Bakeries that are churning the bread out whilst you watch, smell and salivate. Every city in Iran seems to have its own favourite style bread and we hardly ever ate the same type twice. Tiny butchers with the animals hanging on hooks to show they were killed the correct, halal way. They carve off a bit for a customer, or get the axe out when the going gets tough. Vegetable stalls with local and seasonal produce. It doesn’t always look perfect, but the taste definitely is. Clothes shops selling every imaginable style dress in every colour of the rainbow. They are often extravagant and very revealing, and yes, short dresses and skirts are all part of the assortment. 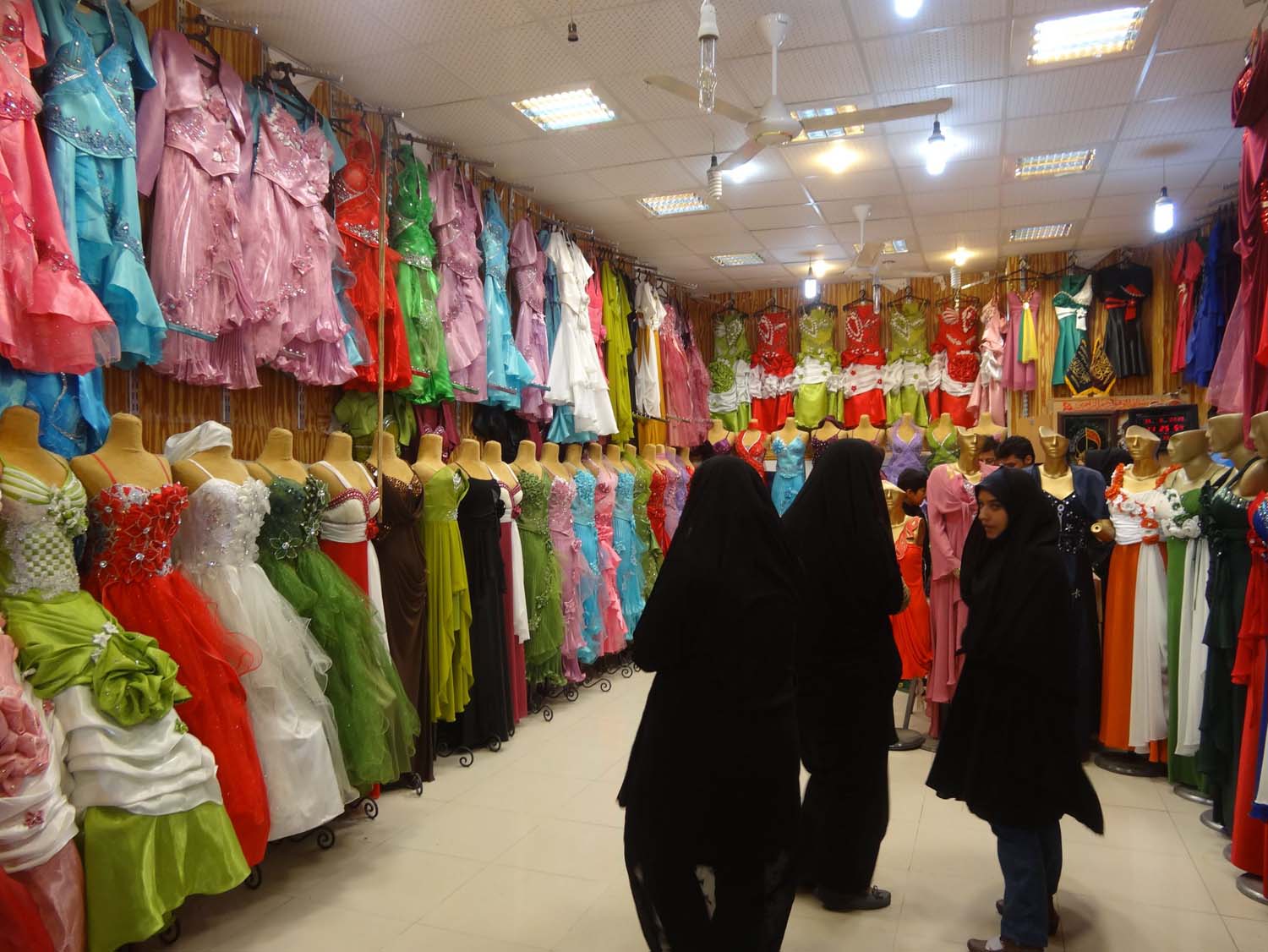 chador or a sexy, colourfull dress?

But the best are the specialty shops. Shops that only sell rope, in every size and colour you can imagine. Bras are on display in another place. Not lingerie, but just bras. For your knickers you have to go elsewhere. Another shop sells scarves. The range is staggering, stacked from floor to ceiling, and even though the majority are dark coloured, many now have bright and colourful designs for, mostly, the younger generation who want to add a dash of colour to their outfits. 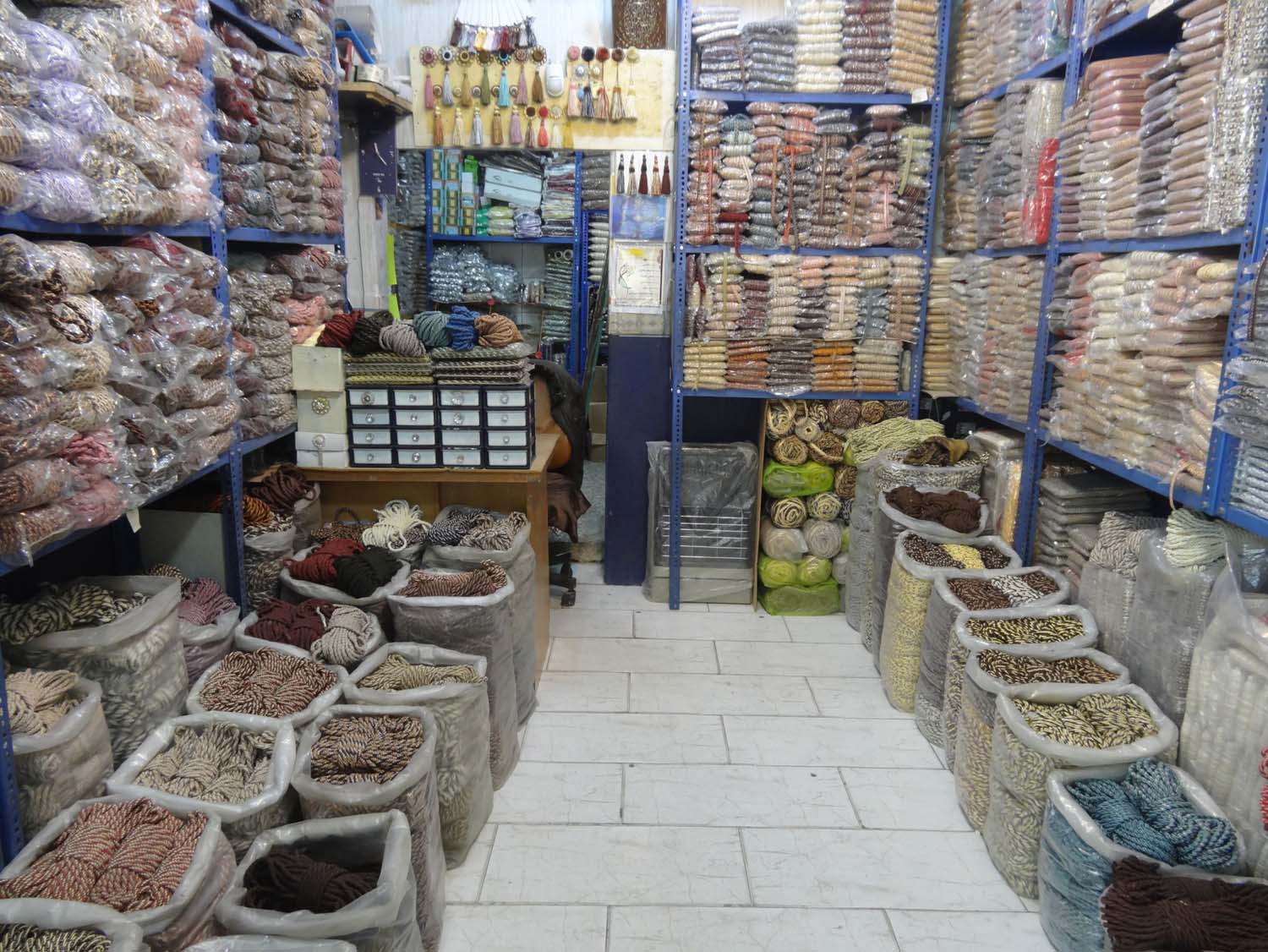 even though this shop only sells rope, it looked beautiful 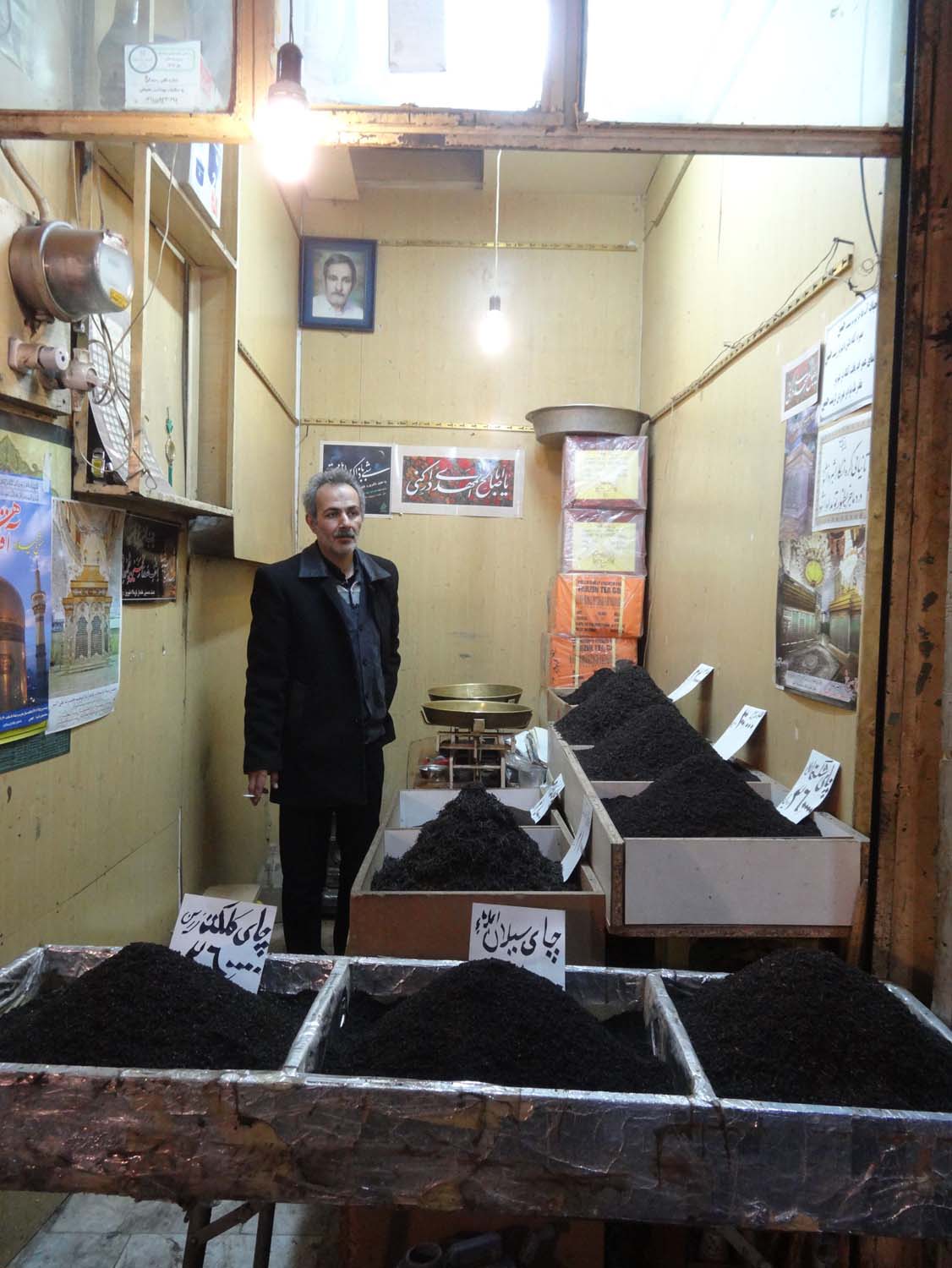 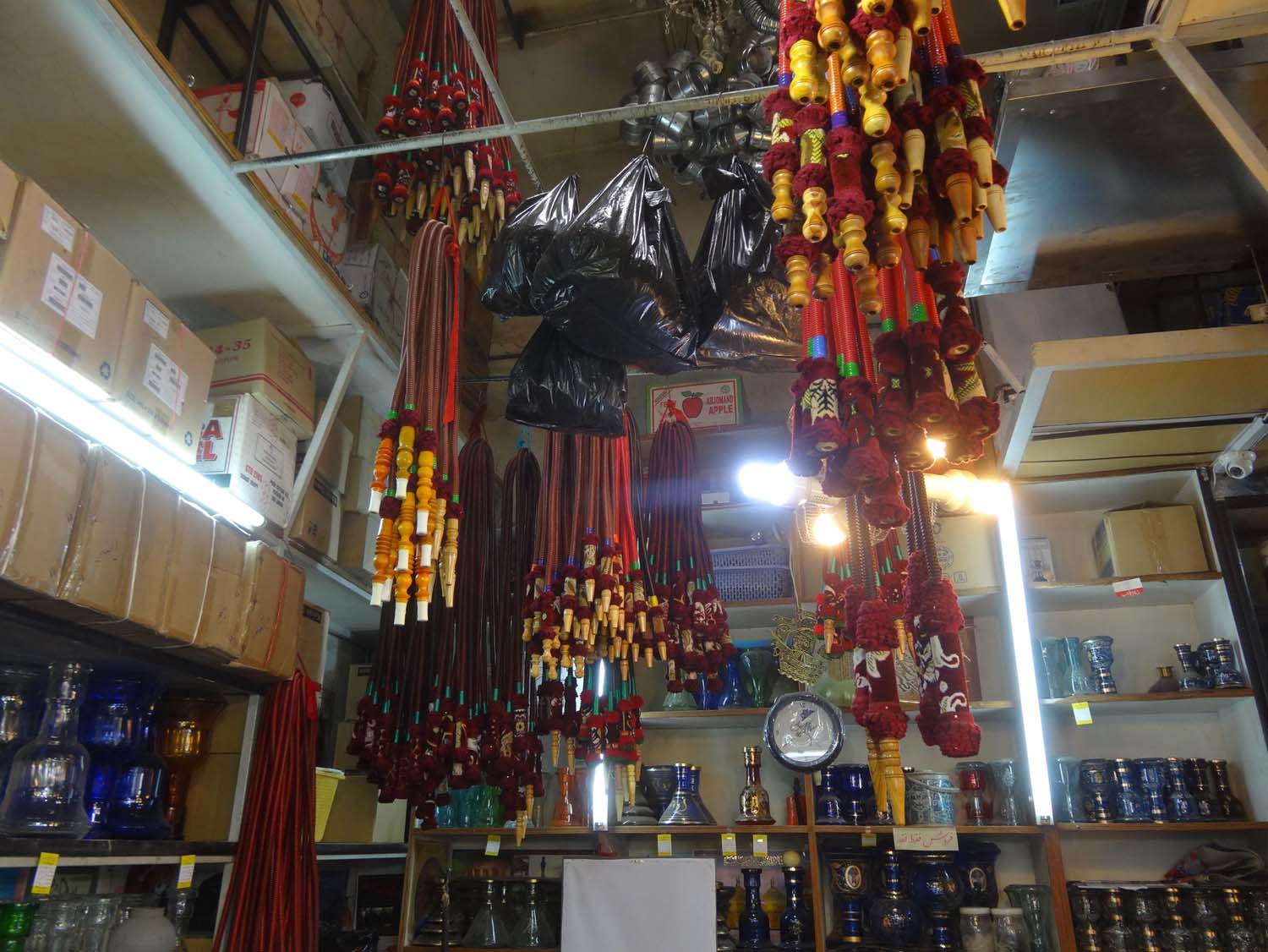 build your own qalyan (water pipe) 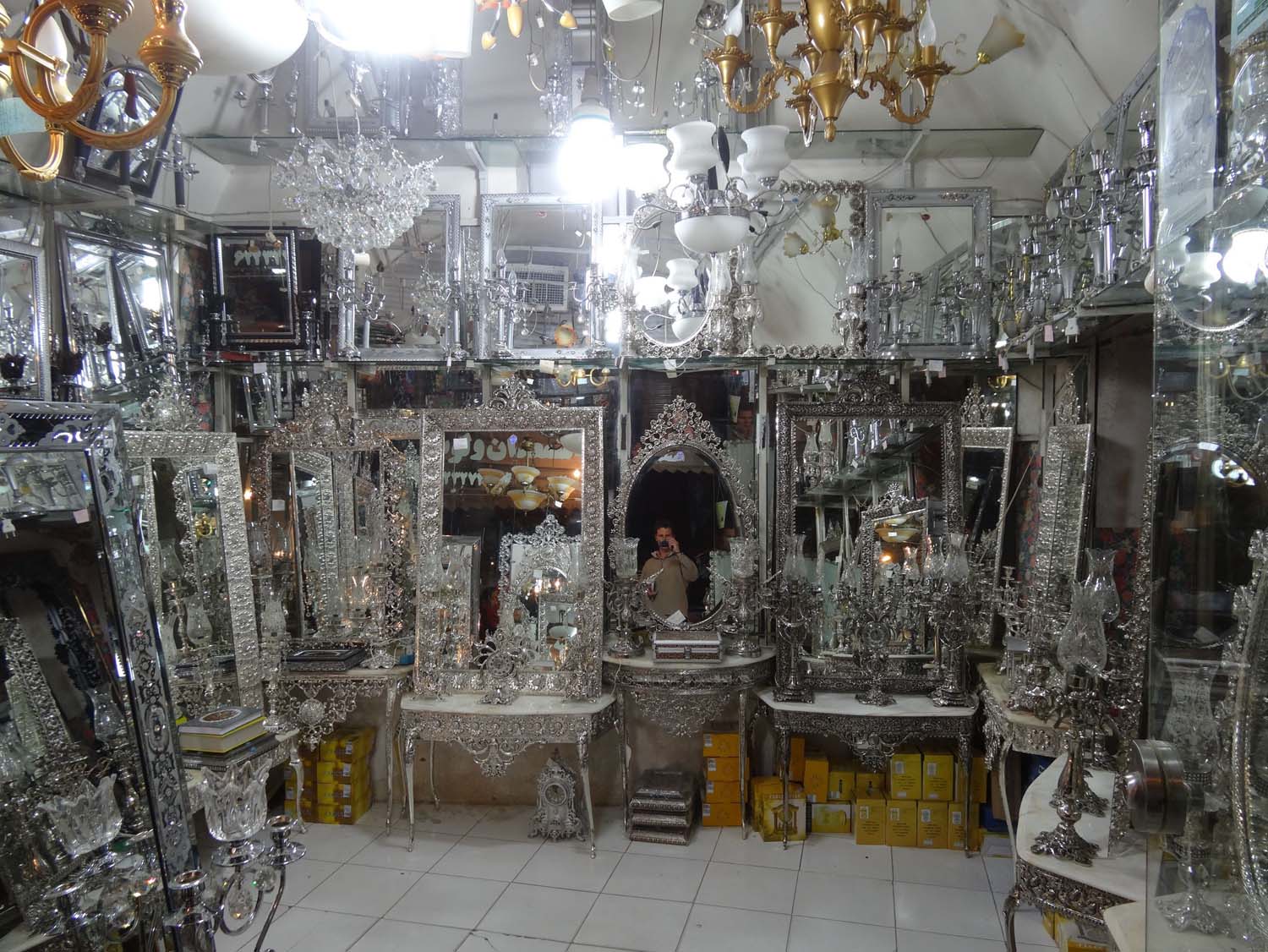 And then there are the spices. The tiny shops that sell spices smell delicious and at some places a grinding wheel is still in use. Whilst no longer being pulled around by a camel, it is nevertheless still in use everyday. Some have all the spices you need for cooking, others are specialised in medicinal purposes. We sat in one such shop for a while, chatting with the owner who had lived in the US, watching the world go past. Every few minutes our conversation would be interrupted by a question from a passer-by. If he had what they needed they would become a customer and he would get the well worn, dented manual scales out to measure the quantity required, inherited, like the rest of the shop, from his father. 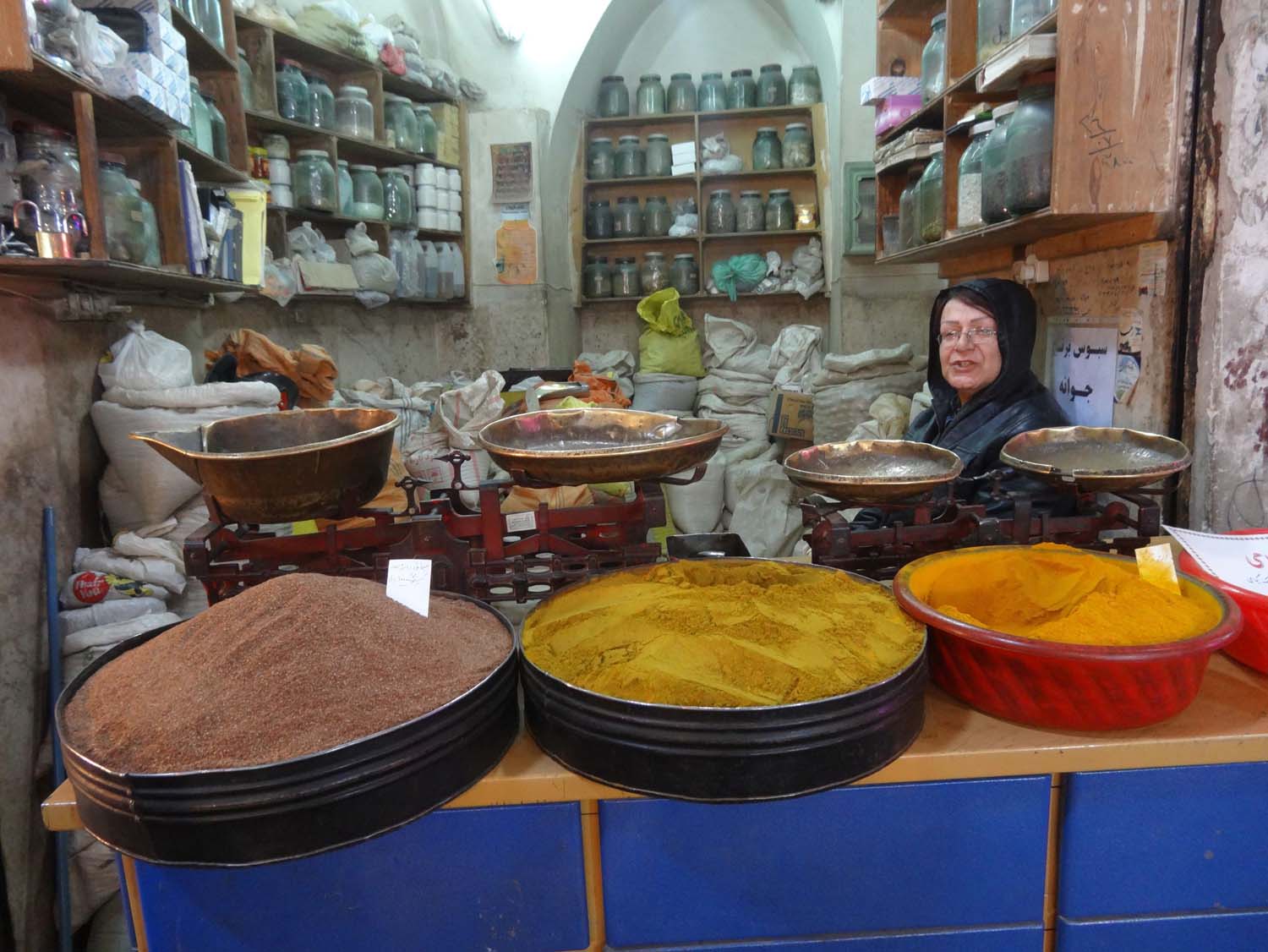 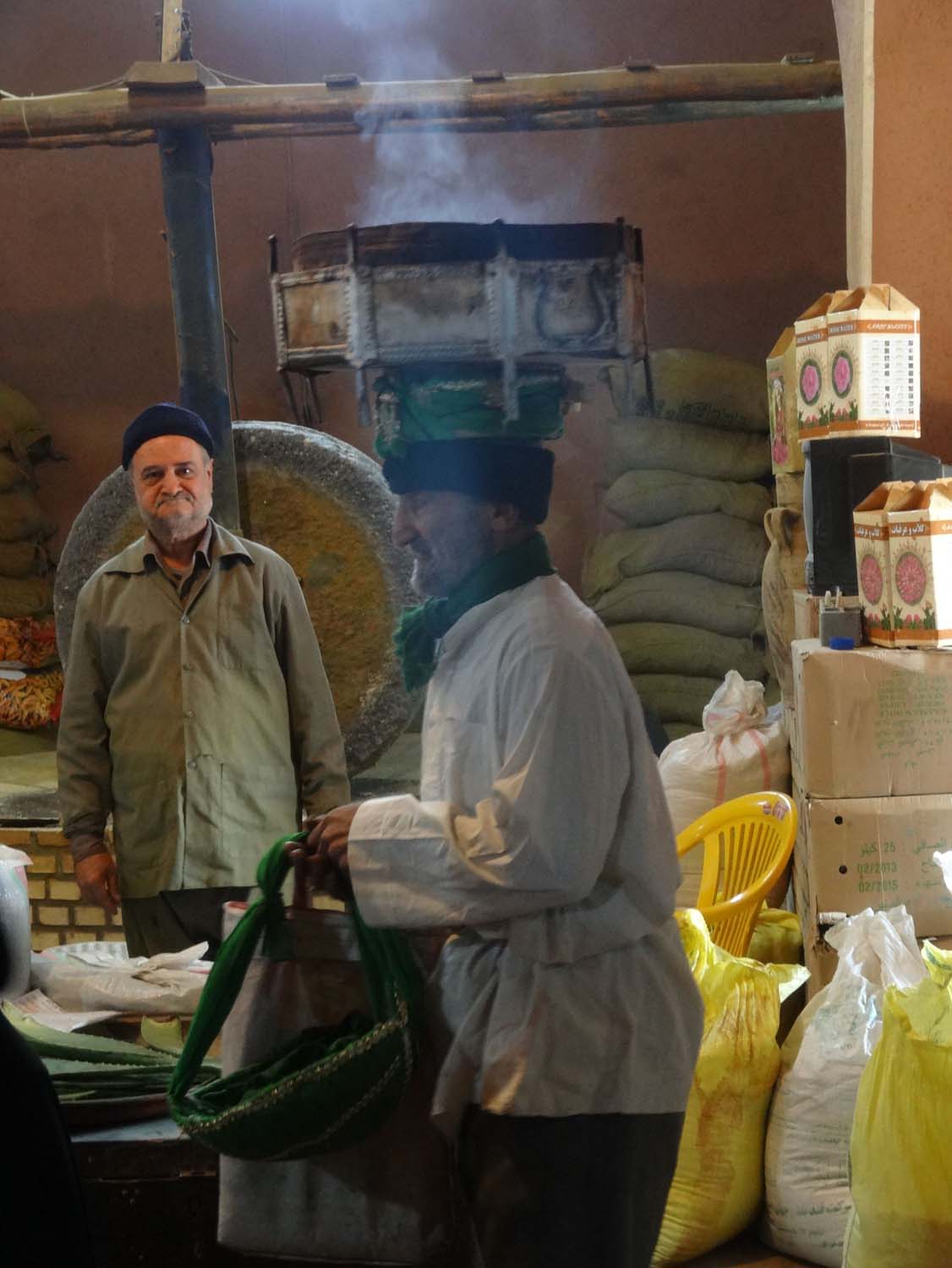 a spice shop is blessed, check out the huge grinding wheel in the background – still in use every day

We saw copper pots being made. The fires roaring, their craftsmen hammering away until the required shape was achieved. Painters were decorating little boxes or jewelry, people were weaving or embossing metal plates. Everywhere you looked things were being made instead of trucked in from China. 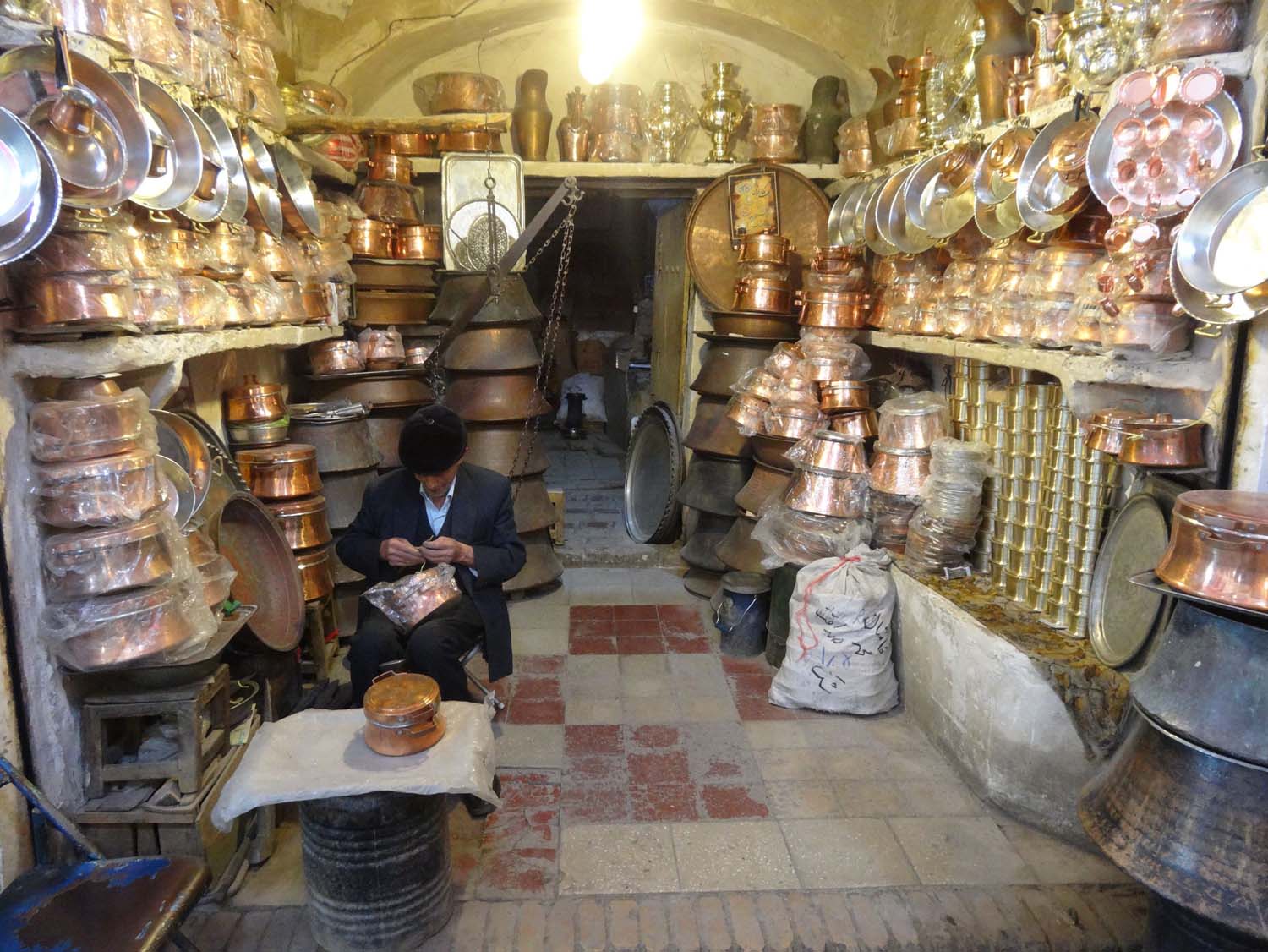 need a copper pot? He can also make you one if you can’t find the right size here.

Carpet sellers were also at work, repairing old carpets or adding leather strips to the (under) sides so they don’t curl up. And there are many, many carpet shops. We had tea in a few of them, watching them unfold many carpets whilst they explained the different techniques used, natural colours versus synthetic colours, nomadic patterns versus ‘city carpets’ and the different materials used in various areas of Iran.

It may come as a surprise that older carpets sell at a premium, and so do carpets that have already been washed. These have already proven they won’t fade or loose colour. A higher density of knots also gives the carpet more value (as it takes a lot more time to finish a carpet) and a repetitive pattern is easier to make (as it can be learned and repeated whilst a single design has to be checked and counted many times).

One carpet shop might specialise in Kilims (woven carpets), others sell the knotted variant. Some specialise in silk carpets from Esfehan, others have nomadic designs. Of course a lot have a mixture of all of them for customers like us who don’t know what they want yet. We were having tea in one such carpet shop when we met Alma and Francoise, two long-time friends. We got chatting about our trips and of course carpets. Francoise had already bought a few and they warned us not to buy any in this shop.

When we all hastily left the shop the seller didn’t look happy, but we were. We visited the Ali Qapu Palace on Imam Square together and we then asked for their help in buying a carpet. We went to a tiny little shop tucked away in a corner of the bazaar, where Francoise had also bought a kilim or two, and with Alma translating for us we sat down on a pile of carpets to look at some more carpets. Very quickly we had narrowed it down to 3, all very similar in design and quality. And then the negotiations started. And continued for a little while. Some time later we agreed on a price and thanks to Alma hands could be shaken on the deal. Smiles all around. No idea where we would put it in Lara though…. 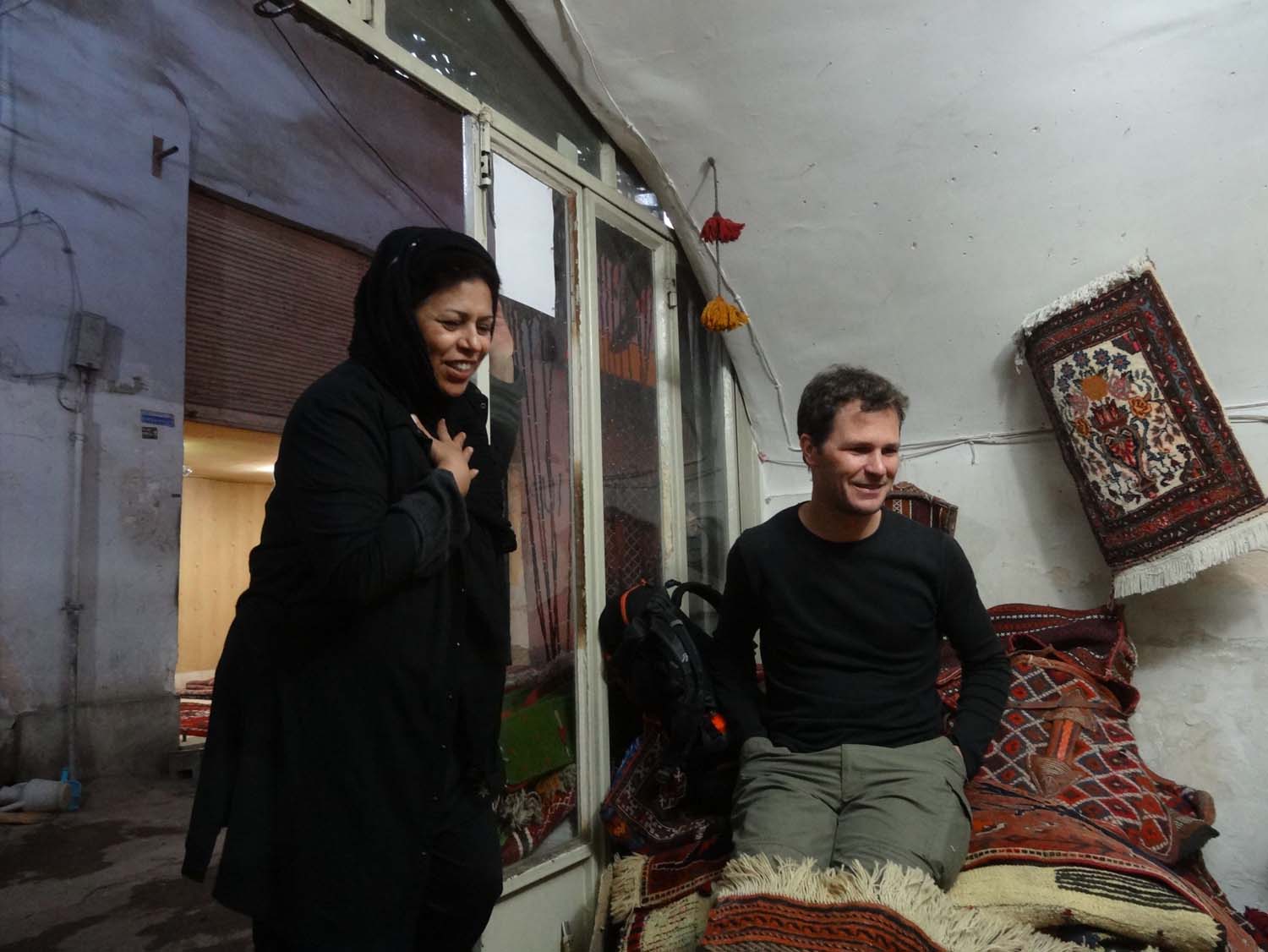 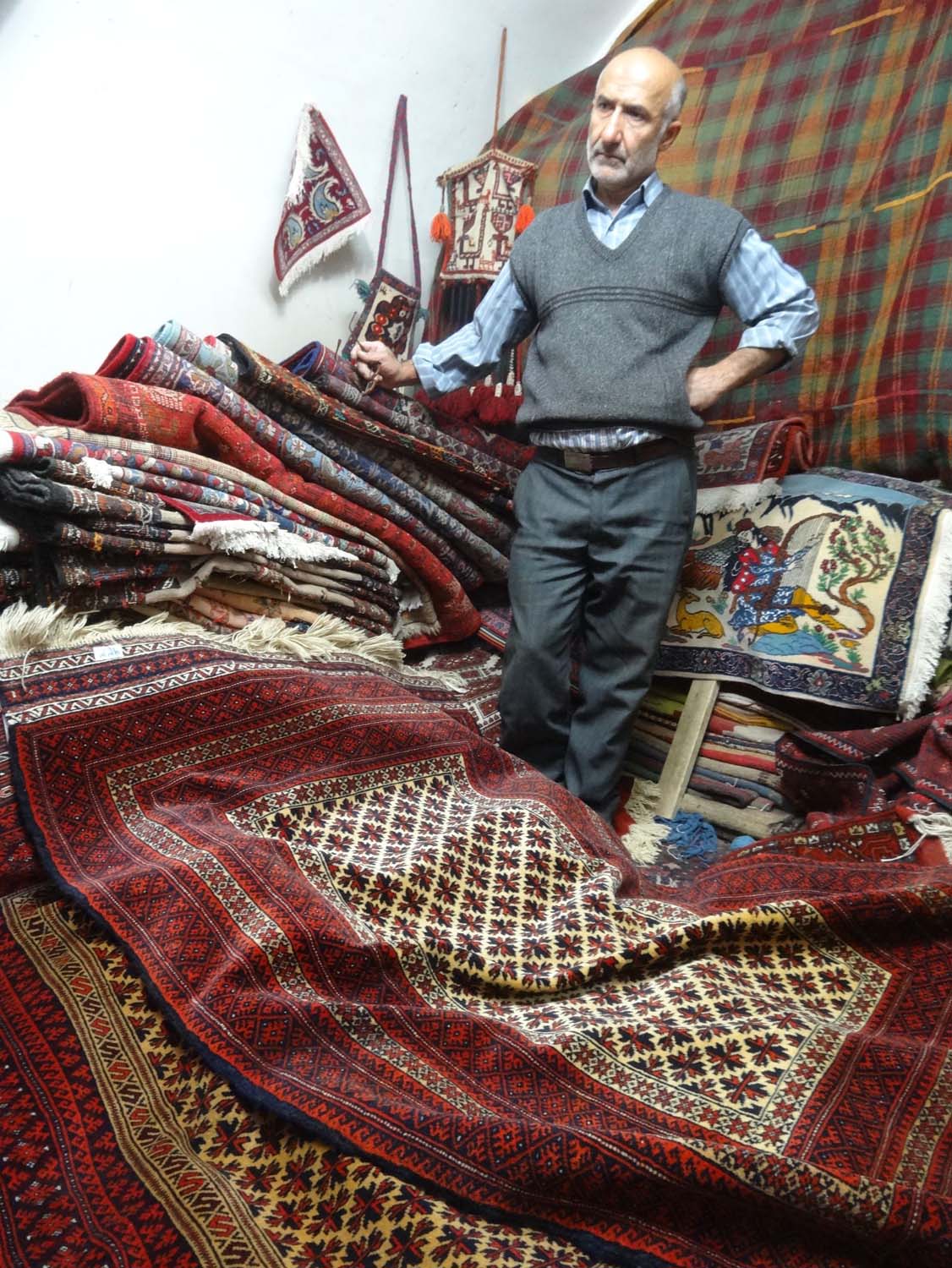 We didn’t have the total amount of cash on us so we agreed we would come back the next morning to pay, pick up the necessary receipt and carpet of course. We said goodbye to our new friends, but hopefully we’ll see them again – one day. After buying our carpet we trudged off to enjoy some more bazaar wanderings before finding a traditional restaurant inside an old hammam for dinner.

It’s not just the variety of shops and the fact people still make things on site that made us fall in love with the bazaars. The bazaars themselves are also something to marvel at. The vaulted ceilings, the domes allowing natural light to come through, the many mosques hidden in the many alleyways. There are plenty of caravanserais with even more shops nowadays coming off the bazaar streets and often there is even a second floor or basement to explore if you are keen. These bazaars have been in continuous use since the 15th century. 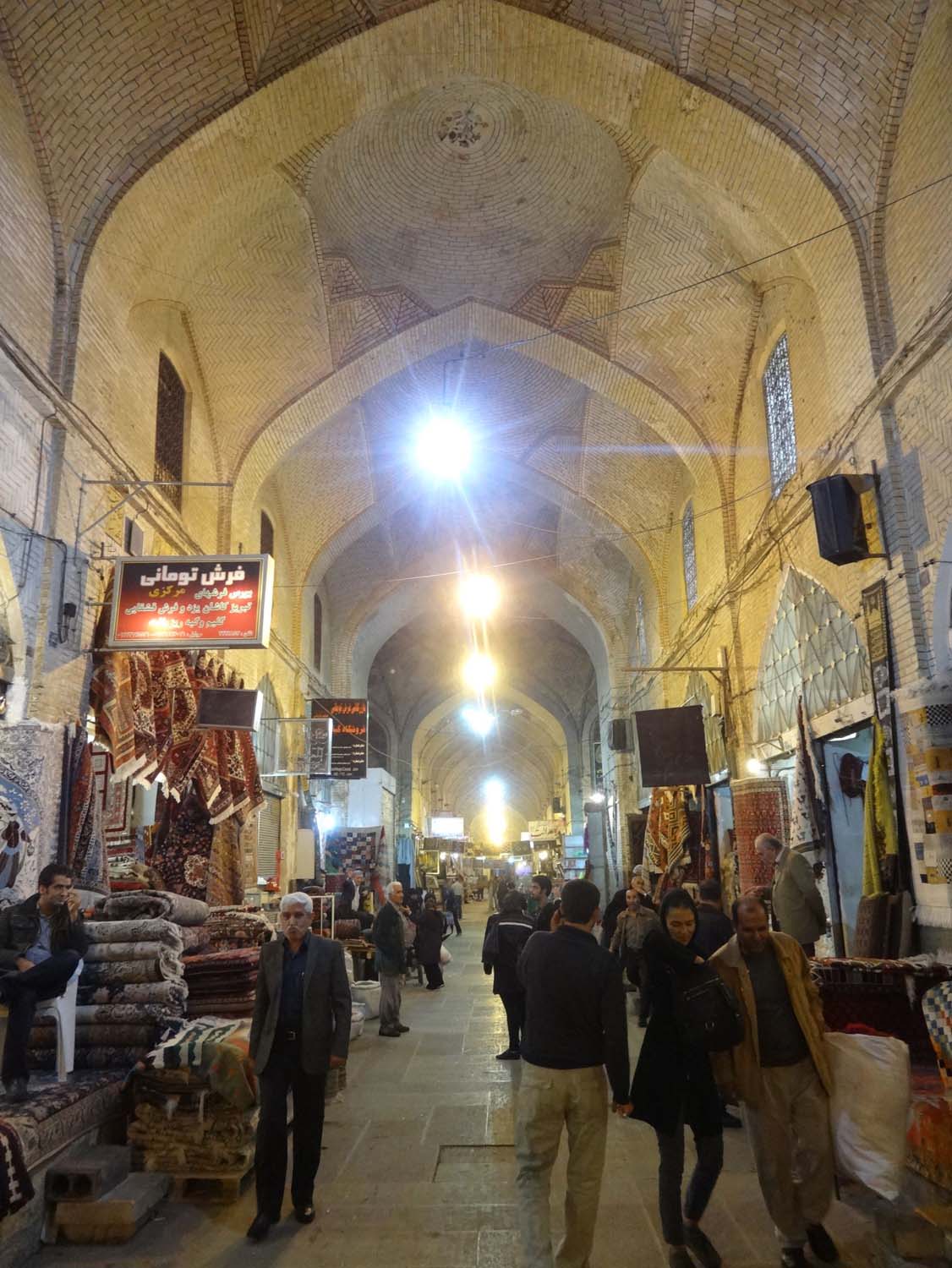 the stunning bazaar in Shiraz

The biggest covered bazaar in the world is in Tabriz and this was definitely the most impressive. Unlike the bazaar in Esfehan and other places around the world, this is still a proper working bazaar where a lot of shops still use traditional scales and amazingly many even still use the abacus (ancient calculator using beads). We didn’t see any tourist souvenir shops, although we might have missed that part as the bazaar is 7 square km! 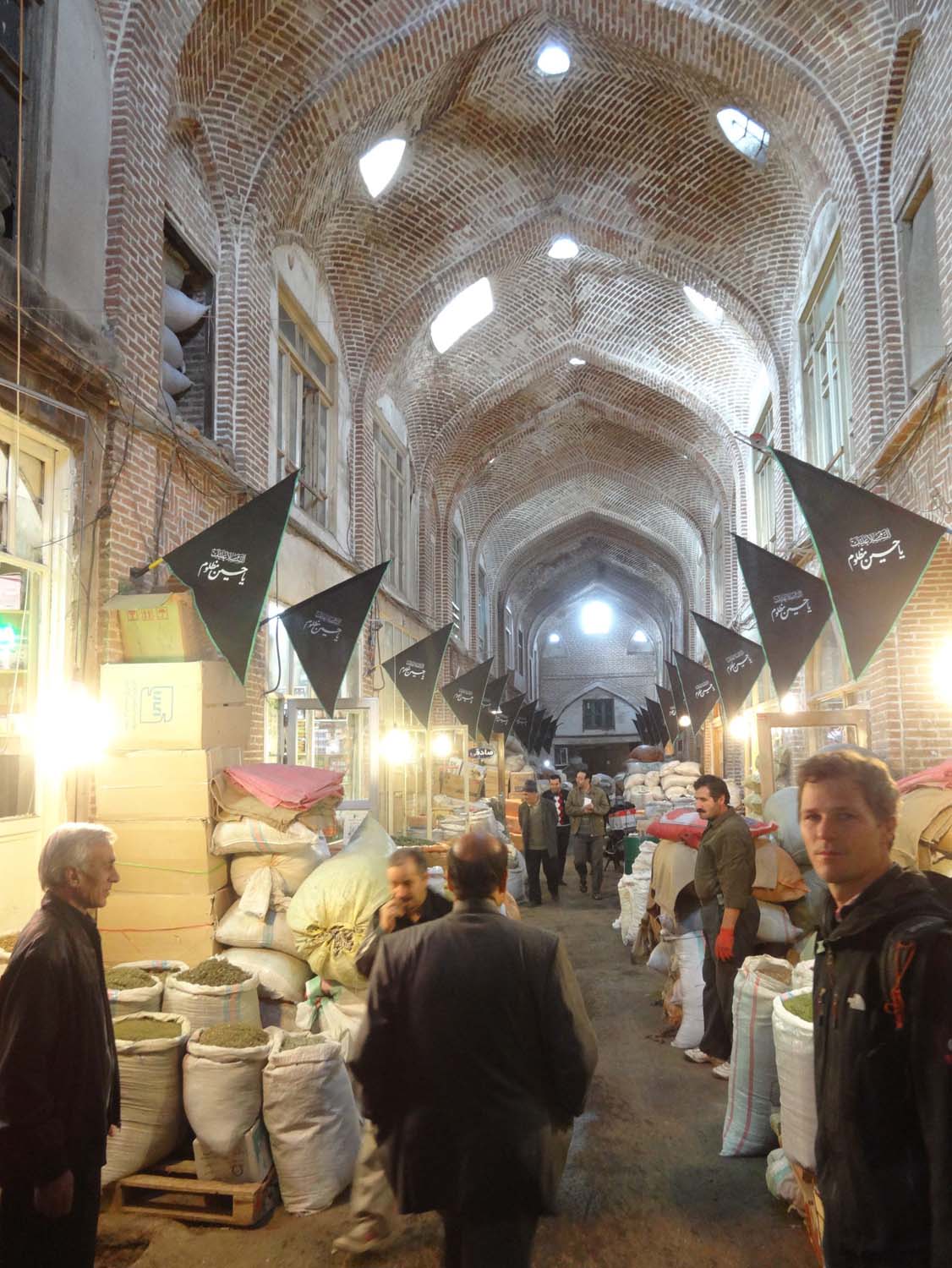 herb street in the Tabriz bazaar, thanks to Mohammad (on the left) and Sina we were shown every fascinating corner of the biggest undercover bazaar in the world and didn’t get lost once 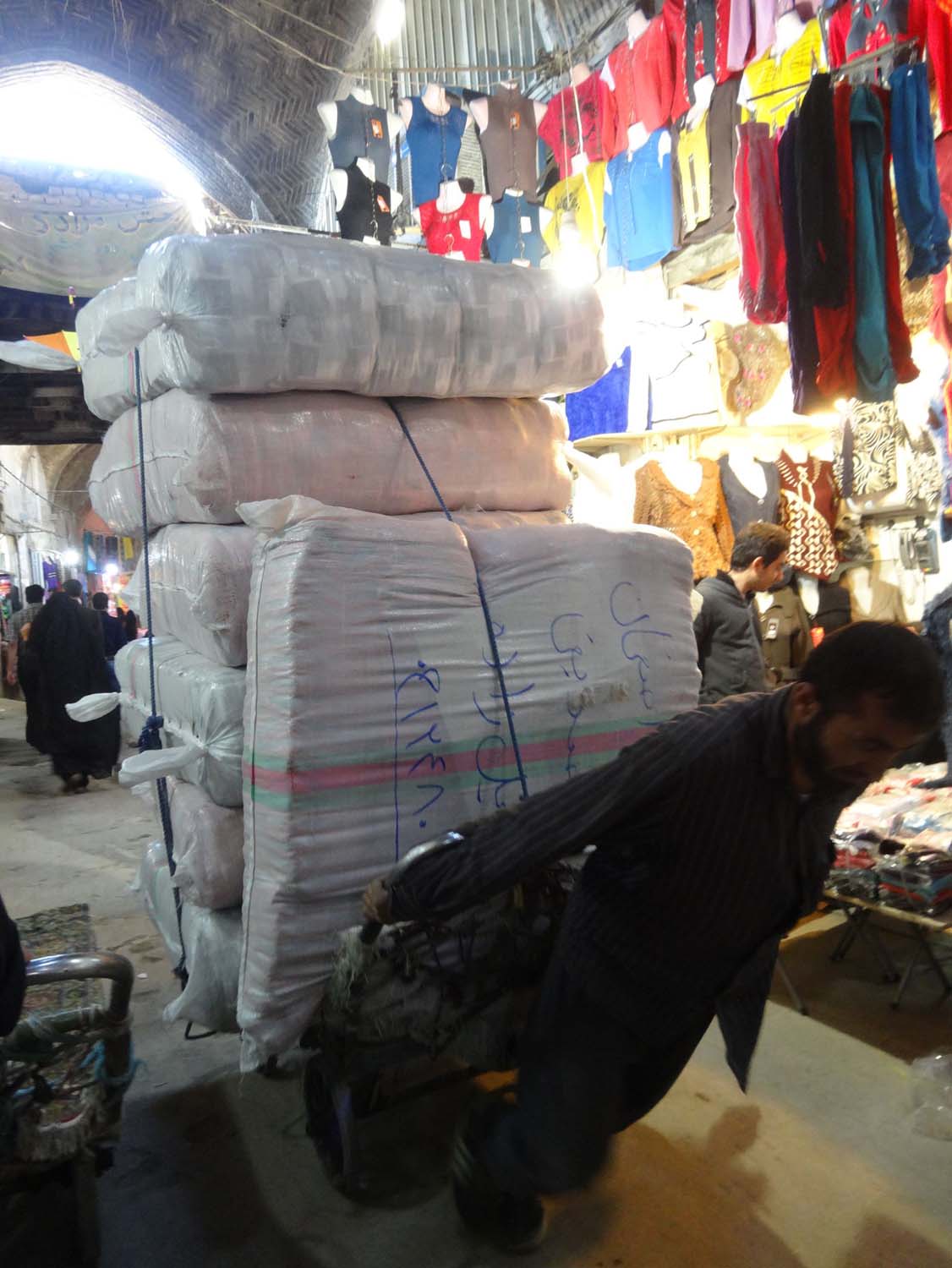 Again we were extremely lucky. On our first evening in Tabriz we met Sina and his uncle Mohammad and they offered to accompany us, not just that evening, but also the next day if we wanted. And so we enjoyed what was probably our best bazaar experience ever as we were guided expertly through the maze of alleys. Shopping was elevated to yet another high and we’ll definitely miss these bazaars.

Mohammad is a carpet salesman, and under his tuition, we learned a lot about carpets. In the short time we had it was hard to take everything in, and perhaps in a similar way to appreciating wine, it is a subject you can study for a lifetime. 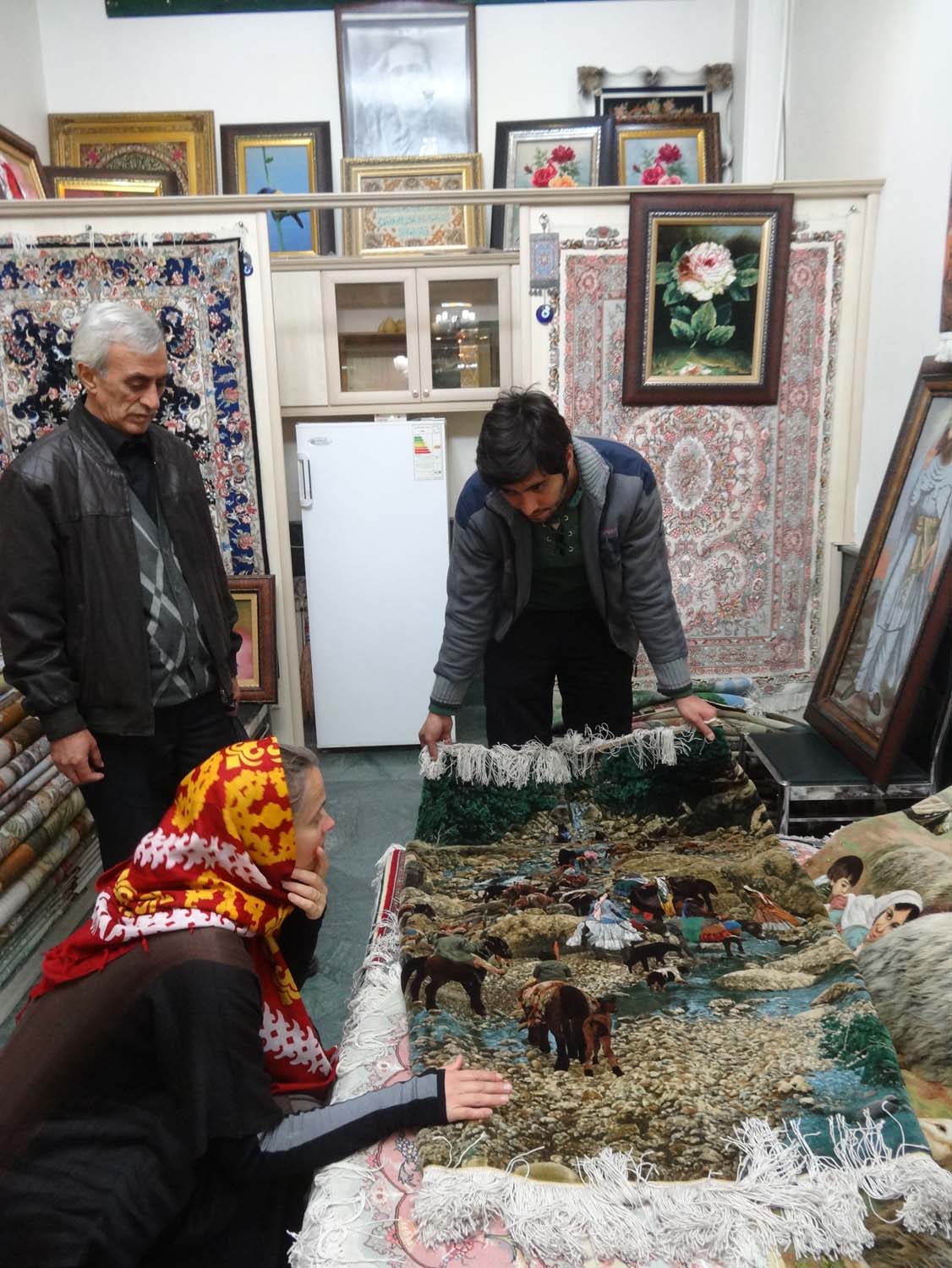 Sina and Mohammad show Jude a different style carpet with a 3D effect.

Our visit to Tabriz coincided with the most important day of Ashura, the period in which Muslims commemorate the death of Imam Hoessein. People wear black, his death is re-enacted with plays on the street and many processions can be seen in towns and villages with participants chanting, hitting their right arm on their chest or beating themselves with a stick and chains on their backs. 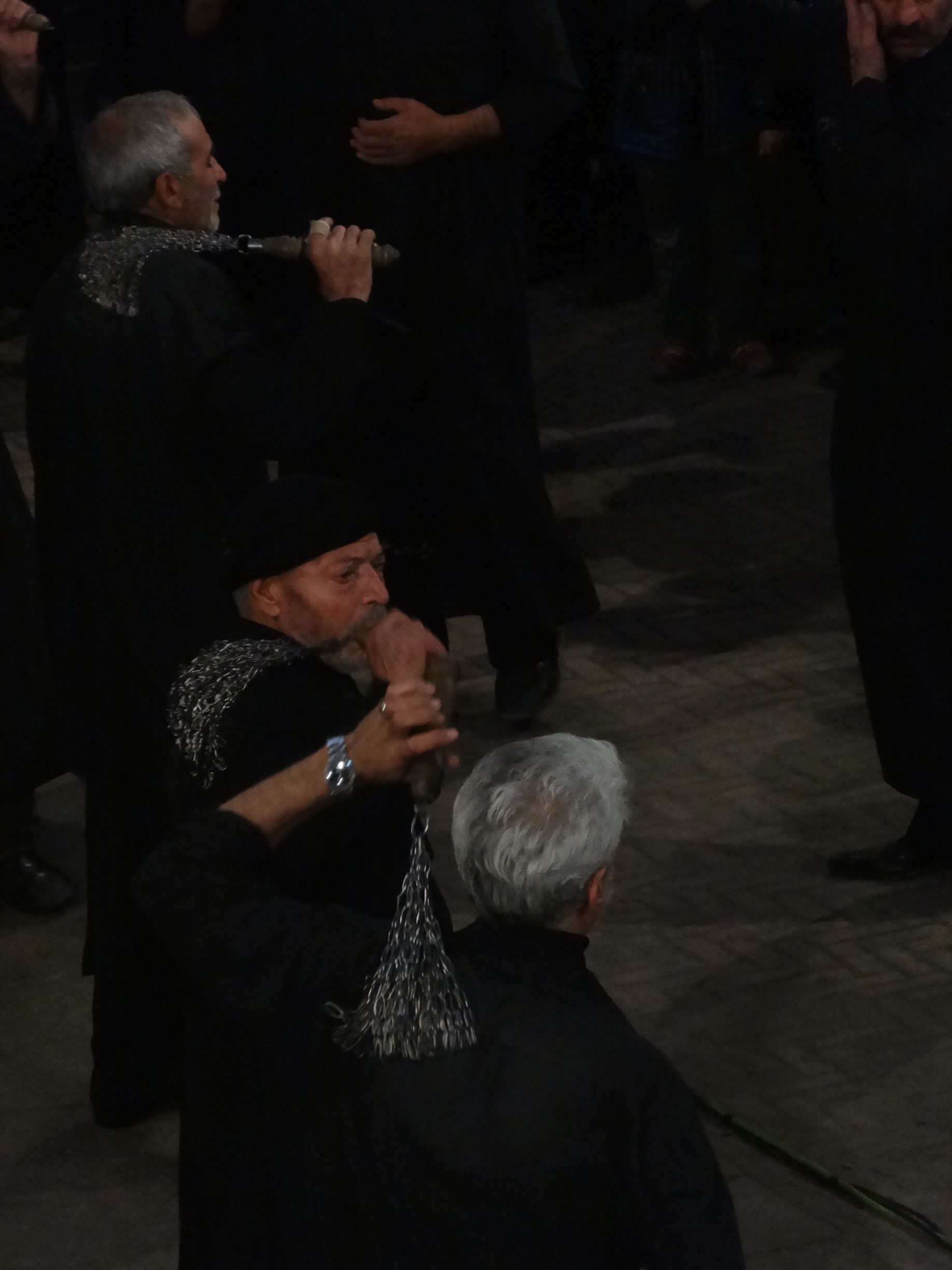 In the most beautiful alley in the Tabriz bazaar, full of the most exclusive carpet shops, groups from local mosques parade in turn to commemorate the Imam. These parades are accompanied by music, and chanting. The bazaar is packed-out with spectators and a TV crew, making it quite a sight. Sina and Mohammad managed to get us in as they know a shopkeeper on the first floor, from where we had a perfect view of the processions (females are not allowed in as it is considered too crowded, it required a change of guards and asking twice before we were both allowed in). An Ashura tradition is that the carpet shops all cease trading but keep their doors open. Instead of selling carpets they hand out cups of tea and food to anybody who would pass by. We lost count of the number of cups we enjoyed. 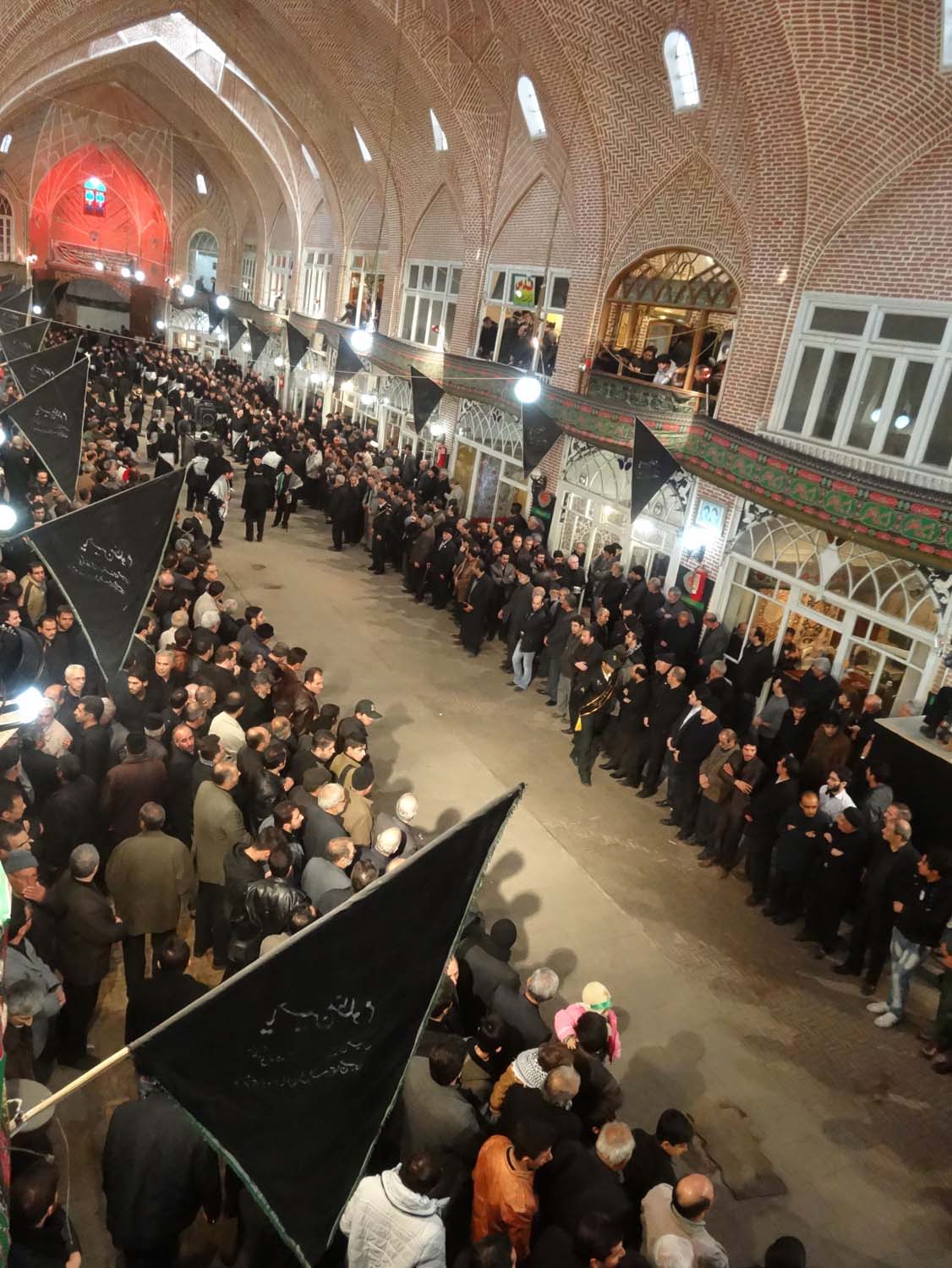 the next group commemorates Imam Hoessein in the spectacular Tabriz bazaar

The bazaar is a wonderful regional tradition, lost to our western societies, and of all the countries we have been fortunate to visit, Iran does it best. 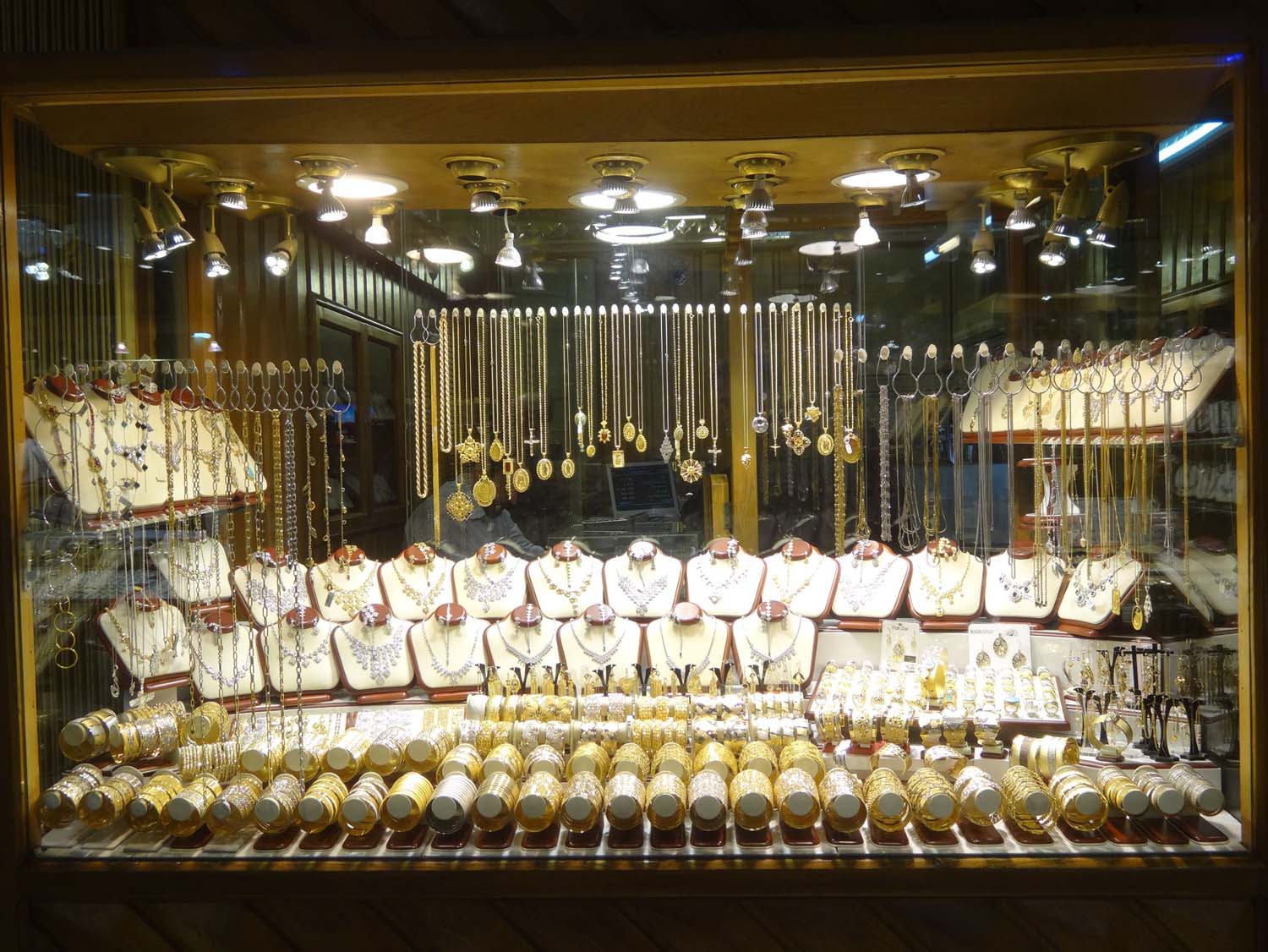 bling, Iran style. this was just one of many gold shops 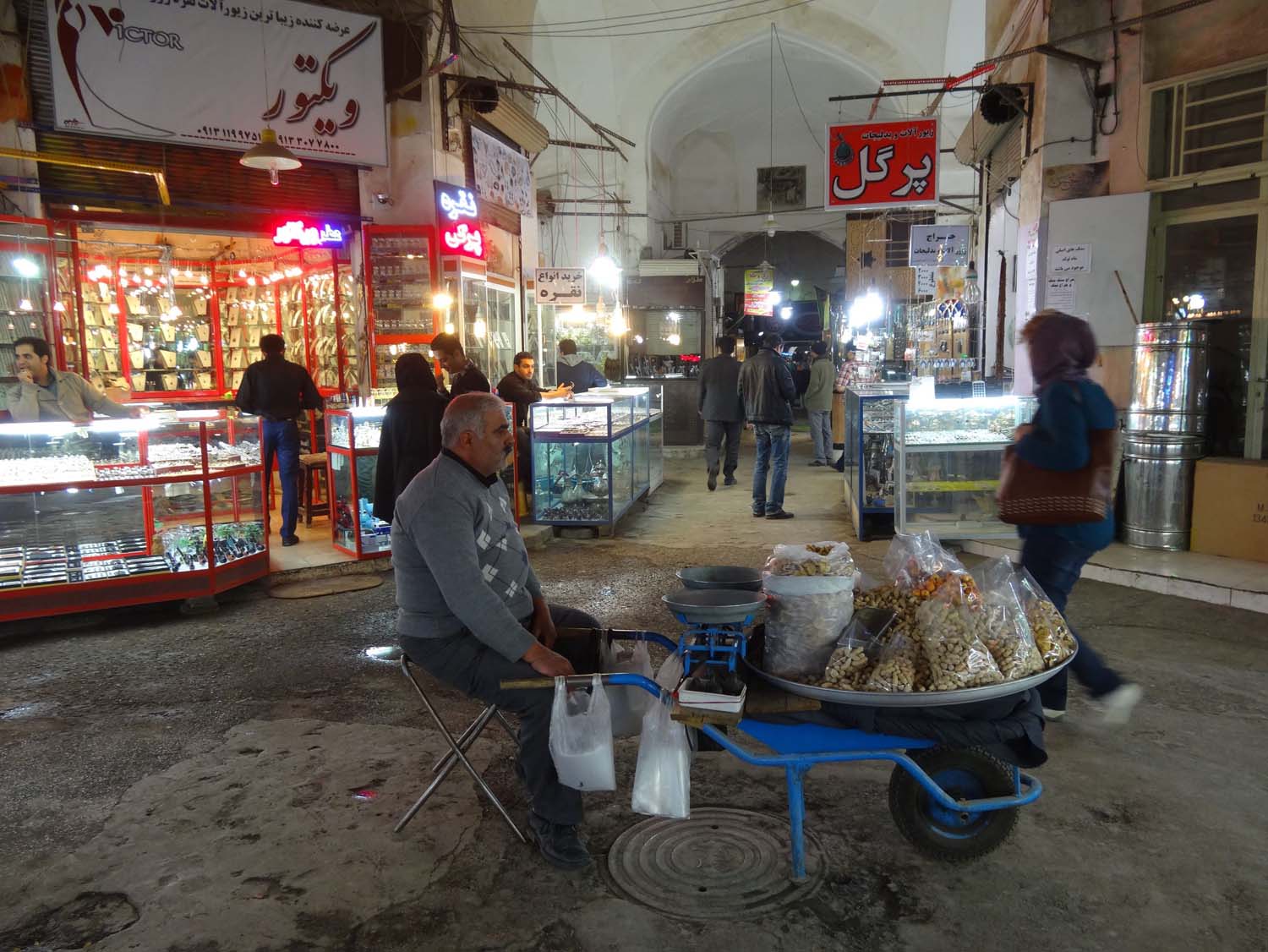 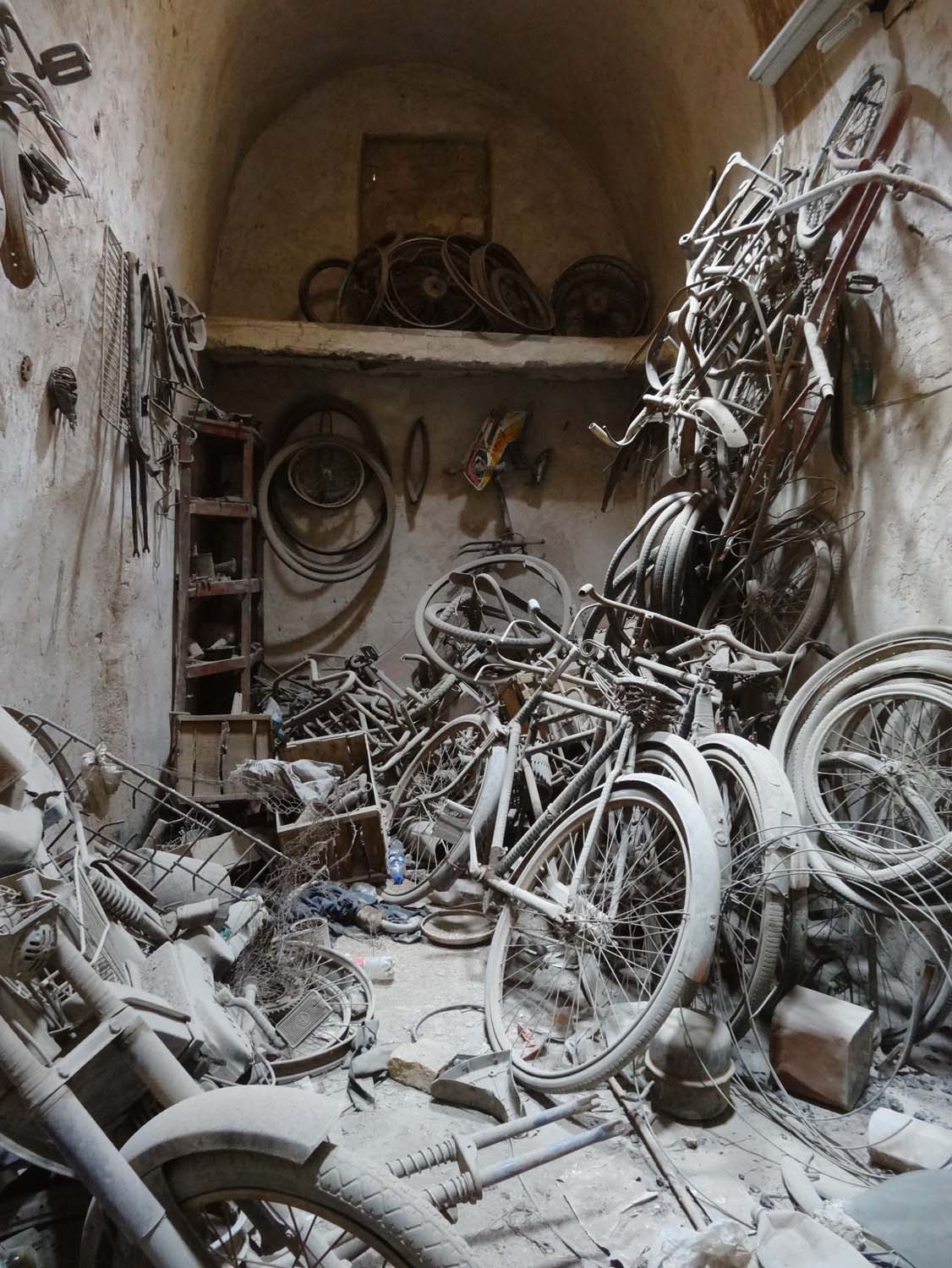 somebody’s shed or a shop? We weren’t sure. 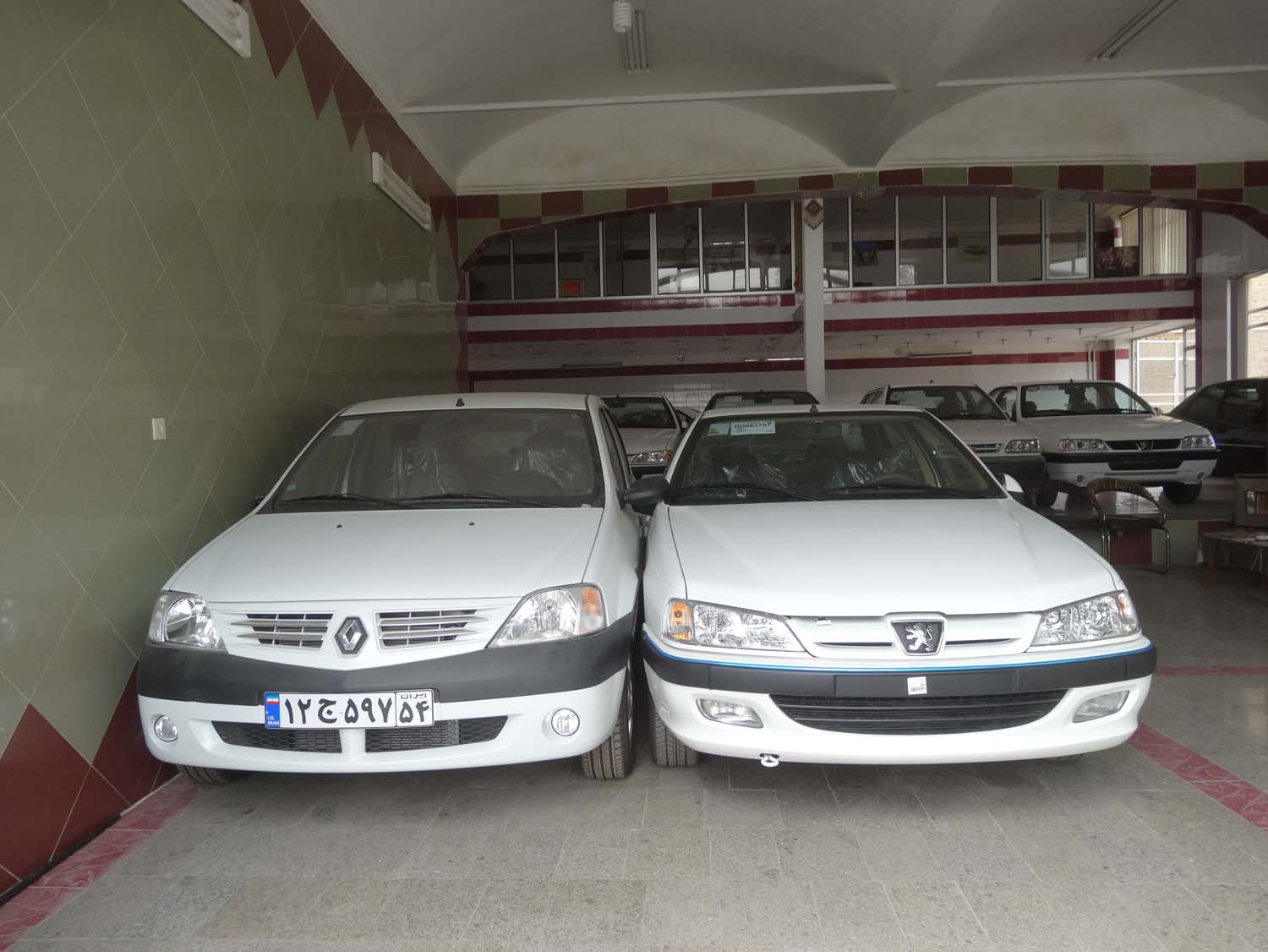 I’d like to test drive the one on the left please!