Jon and Jude in Athens

Andrea, Jon’s cousin, had just moved to Greece, or more precisely, Crete, and we were keen to visit. To get there we had to fly via Athens, and as Jude had never been and Jon had only visited once as a young boy, we decided to spend a few nights there before catching the connecting flight to Crete.

From Dar you can fly Turkish Airlines to Istanbul, and then on to Athens. Great, although rather annoyingly it has a departure time of 03.25am…. do you go to bed before driving (or being driven) to the airport, or not…. Half awake we turned up at the busy airport and on autopilot we dragged ourselves through the various steps.

A bit tired we arrived in Athens and hopped into a taxi, straight to our AirBnB. Our lovely host met us and left us with a full set of instructions on what to do, where to eat, how long to spend where, perfect. With her suggested itinerary in our mind we set off enthusiastically. 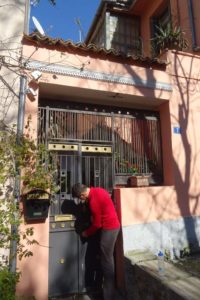 Whilst we can go for a run around the streets of Dar during daylight hours, we miss the simple pleasure of strolling around an unknown city. So that’s exactly what we did. We just walked the streets of central Athens that afternoon and soon caught our first glimpse of the Acropolis on top of the hill. An impressive sight for sure. We found some delicious ice cream whilst enjoying the thriving tourist centre. Lots of cafes everywhere, lots of people eating and drinking and generally enjoying a sunny, spring afternoon. 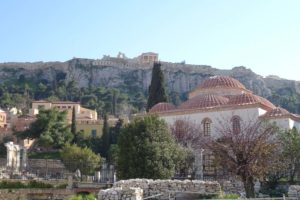 first view of the Acropolis 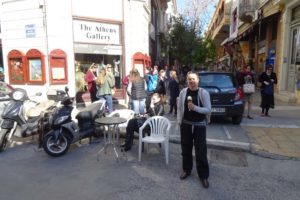 Jude enjoying an icecream in Athens

After getting our bearings and first impressions of Athens we headed back towards our AirBnB where our hostess had pointed out a local café in the area that also served food. We had a delicious smorgasbord of everything Greek for dinner, served with a good local red wine. We didn’t like the fact that everybody in Greece seems to smoke, European laws about banning this indoors has not really caught on yet in Greece, but this is the same everywhere you go. 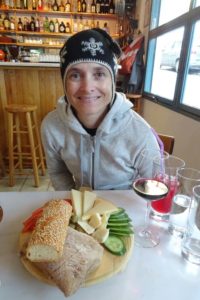 a smorgasbord of Greek food in a local cafe, recommended by our host

Opposite the little café was a bakery and before heading home we investigated and bought far too many treats for dessert and breakfast. The winner was definitely something called Skantsoynia and we would go back the next night to pick up some more… 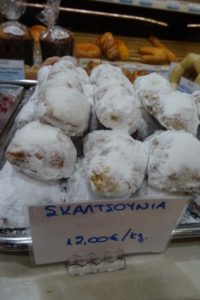 we bought some skantsoynia in a local bakery – delicious! If you know the english name please let us know as we would love to find a recipe for it!

The next morning the serious sightseeing began, accompanied by the sound of a Brazillian drum band cheering on the runners of the half marathon that day. First stop was the Acropolis, trying to avoid the crowds that would rock up in a few hours by bus. It is all very impressive, although Jon recalled the Parthenon it was under renovation when he visited about 30 years ago, and they don’t seem to have made much progress! After wondering around, reading the descriptions and taking plenty of photos we found another café for a drink before checking out the Athenian Agora, the commercial heart of the city from 3,000BC. We were lucky we did as it closed 4pm – we were chased out by security! 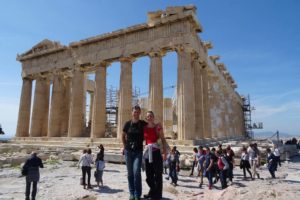 Jon and Jude in the Acropolis 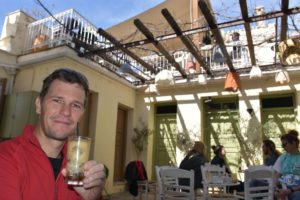 the cafes are too inviting, we seem to be stopping at every second one that we pass… 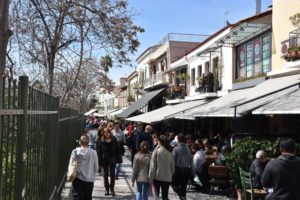 Jude on the streets of Athens. Despite the state of the economy, the whole population appears to be out to lunch. 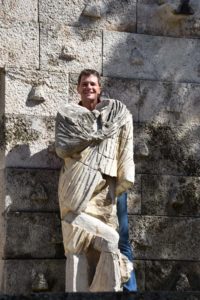 We find Jon’s statue in the Athenian Agora 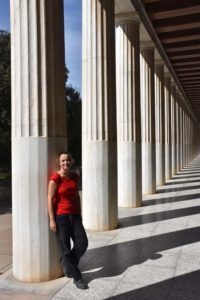 Jude in the Athenian Agora 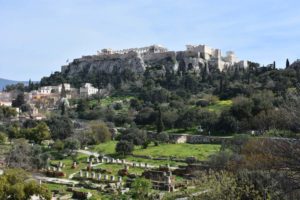 the view to the Acropolis from ancient Agora

Time to find a restaurant for dinner, following yet again the suggestion of our AirBnB hostess we decided to go to the Old Tavern of Psara, one of the oldest restaurants in town serving food to all the celebrities and doing it well. Sitting out on the wide steps of the old part of town, watching the world go by as we were enjoying some excellent Greek food was a great way to end our first full day in Athens. 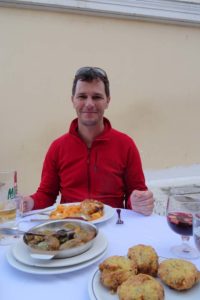 Walking back through Athens at night gives you the opportunity to view the ancient ruins differently as they are lit up during the night, a beautiful sight.

The next day we visited the Acropolis museum as we wanted to see some of the original things now removed from the site. They have some impressive pieces spread over a few floors and we spent a couple of hours exploring the different sections, loving the colourful replica of the Acropolis built with Lego. Its in better condition than the real thing. 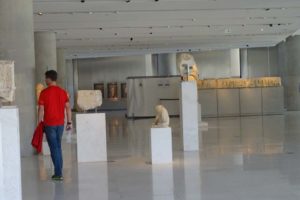 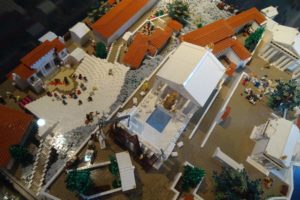 We had enough time to watch the changing of the guard in Syntagma Square at the Monument of the Unknown Soldier. This is an hourly event so it wasn’t too busy. Quite a pompous affair, but it does look impressive as they go through the ritual in perfect step. 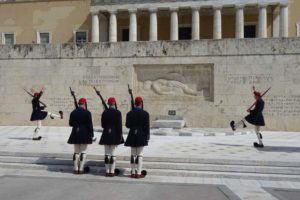 On our way back to pick up our suitcases we passed the Panathenaic stadium. Originally built around 330BC it has undergone several refurbishments over time. It hosted the opening and closing ceremonies of the first modern Olympics, and was used again as an Olympic venue in 2004. Even today, this is the departure point of the Olympic flame to each host Olympic city. 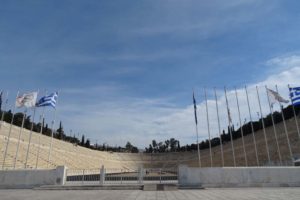 Another taxi took us back to the airport, and we were off to catch up with Andrea, Jon’s cousin, and his parents who were waiting for us on Crete. But that’s another story…