We wanted to go trekking in Laos and decided to go to the most northern province, to a tiny town called Phongsali. This area is meant to be the most scenic, forested and still has a lot of tribal villages that have an animist culture.

After 2.5 days driving from the Viengxai caves in the east (to cover 260km as the crow flies, 662km via the road) we finally arrived around 6.30 at night. According to our gps this drive should have taken us 12 hours, but we spent 20 hours actually driving to get there. We were hungry and tired, but determined to find a tour that would start the next day so we wouldn’t have to wait a full day before we could start the hike.

We had just found a trekking company and were looking at their different treks when 2 people approached us. Damian (from Buenos Aires, Argentina) and Dvash (from Israel) were leaving the next day on a 2-day, 1 night trek and were looking for some other people to join them to bring down the cost per person.

We joined them for dinner so they could tell us about the trek they had booked. Dvash is Jewish, so we were both trying to make sure the food wasn’t cooked in pig fat. She can’t even eat the fish sauce they use in many dishes, so for a change I was the least ‘difficult’ one to cater for!

They had booked exactly the trip we wanted to do, at half the price the other company was charging, so we decided to join them. As it was my sister’s 40th birthday we decided to book into the same guesthouse as they were in, the only one in town where they have wifi, so I could call her on Facetime. Luckily the powercut from the big storm didn’t last too long and I spent the next hour talking to the whole family!

The next morning we drove to Boun Nueau as the trek would start and finish there. We met them and our guide at the bus station. Our guide, Boun Houng, was an Akha man himself (we would be spending the night in an Akha village), very knowledgeable and enthusiastic. A great combination. 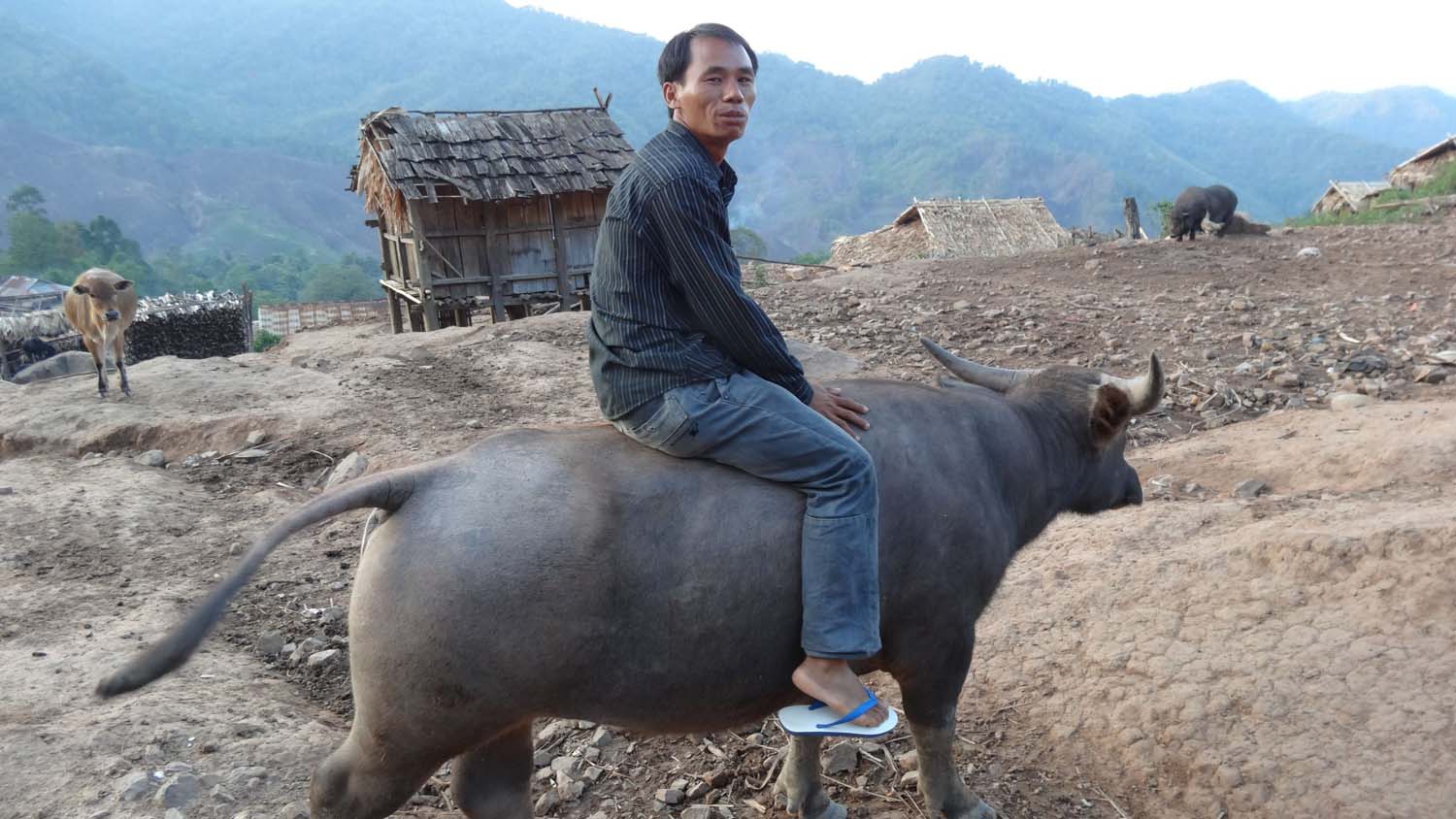 After finding a place to park our car and do some laundry (both at a small guesthouse in town), we started the hike. Only a few km later we were in the jungle and Boun Houng continued to be a wealth of information about everything. Jungle food, Lao life, Akha life and also very easy to talk to about anything else. His English was excellent, but required a little tuning into.

He also turned out to be a fantastic cook. He had made our lunch himself that morning and we all loved it! We just sat on some rocks on the path, the tablecloth was made of some big leaves he had cut off earlier. With sticky rice you don’t need a spoon or chopsticks, you can just ‘peel off’ a little clump with your fingers, and use that to grab a mouthful of food. We finished it all, making Boun Houng very happy as he wouldn’t have to carry it anymore. 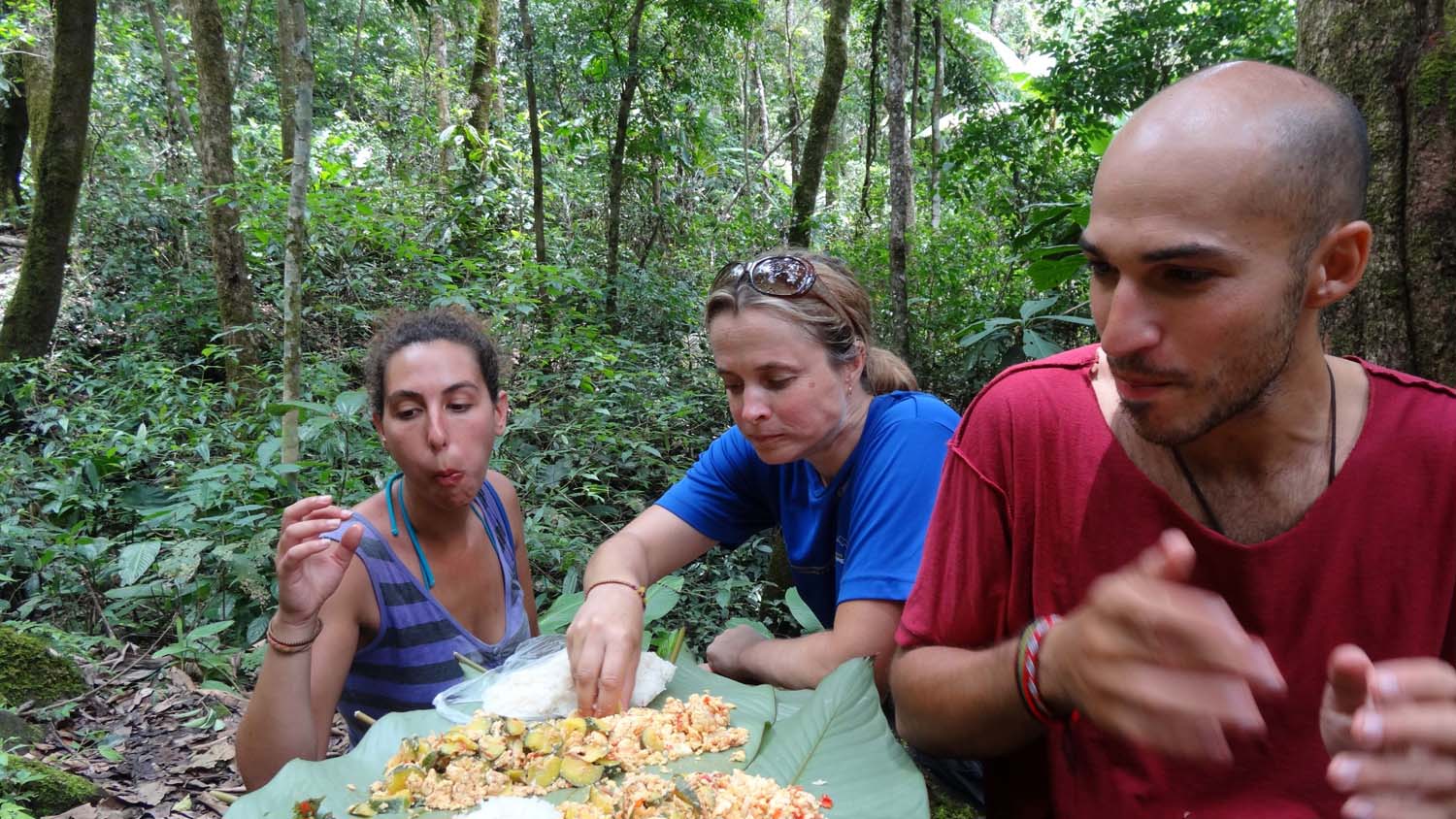 We hiked for about 5 hours that day before arriving at the small Akha village where we would be spending the night with the village chief’s family. We were introduced and shown our sleeping area in the big house. We dropped our bags and went for a walk in the village. Having Boun Houng with us made it easy to talk to the people, but mostly we would just ‘talk’ to them by pointing, laughing or playing with them. 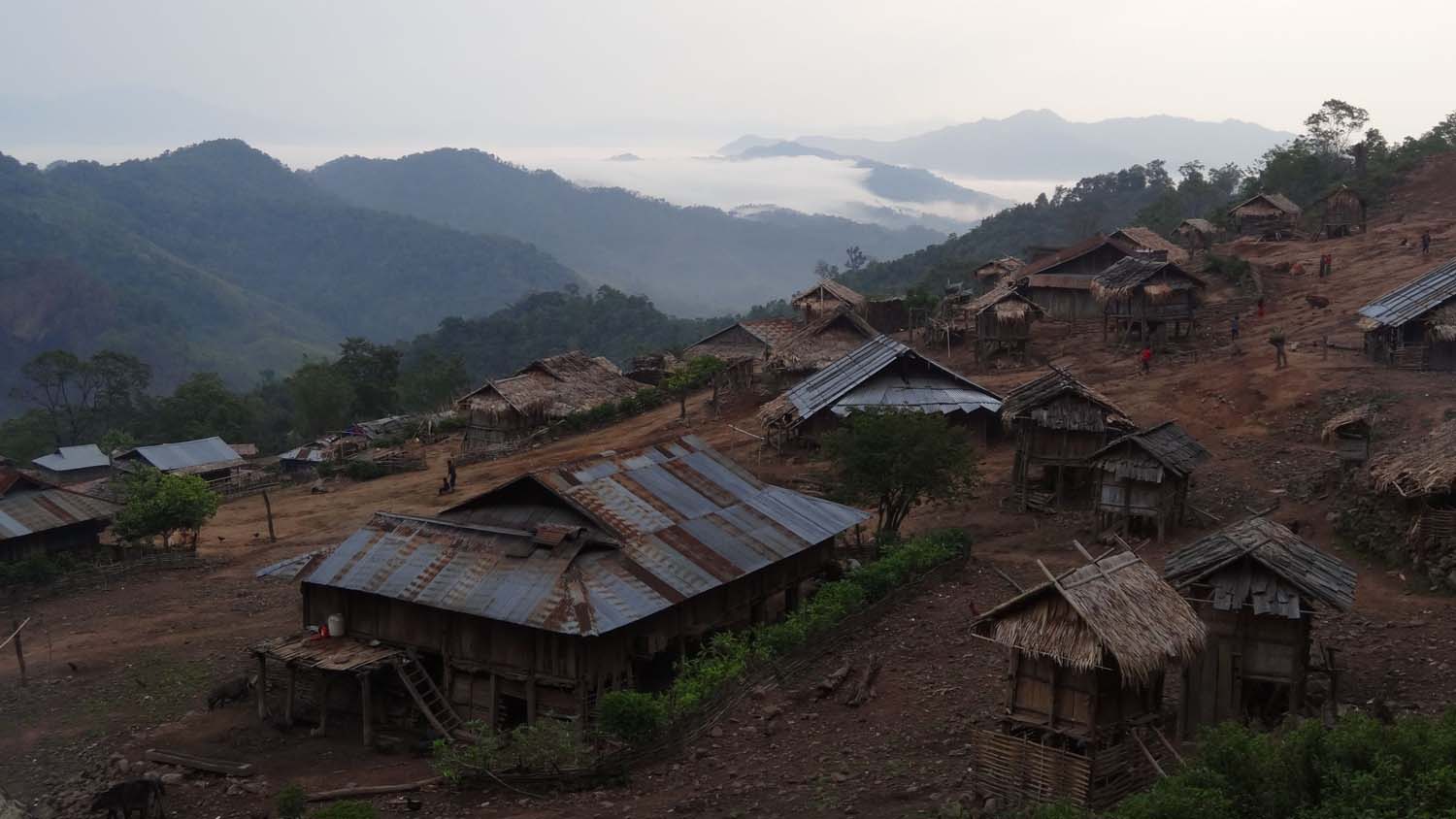 ‘our’ Akha village. No roads and no electricity.

The kids had a cart made from wood, including the wheels. We pushed them on it for a while until we got tired and then they took it for a spin on the steep, rutted hill! It was great, we filmed them and then they ran over to come and watch the little movie. Lots of giggling and pushing and falling off the cart. 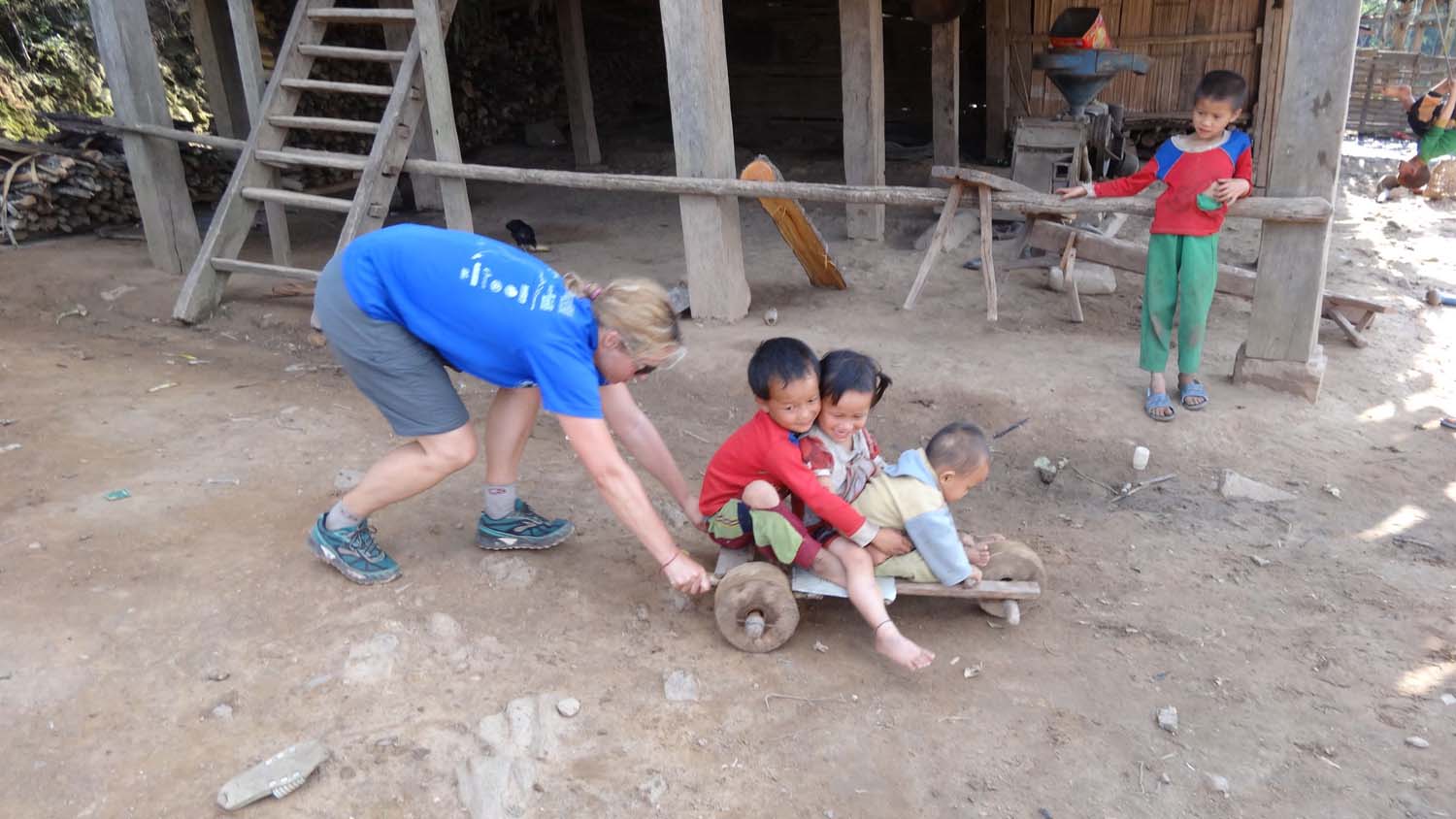 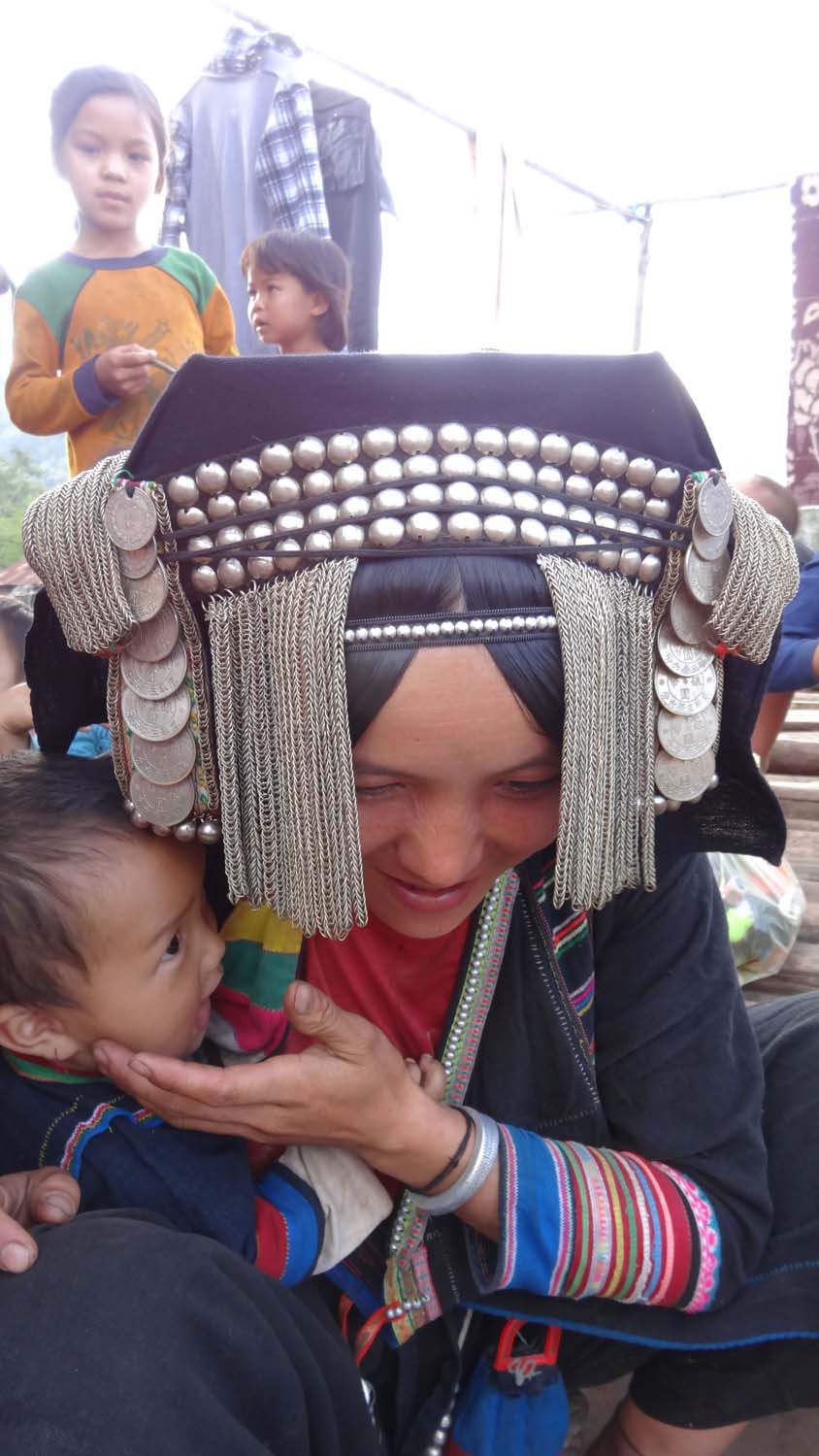 typical headdress and clothes for an Akha woman 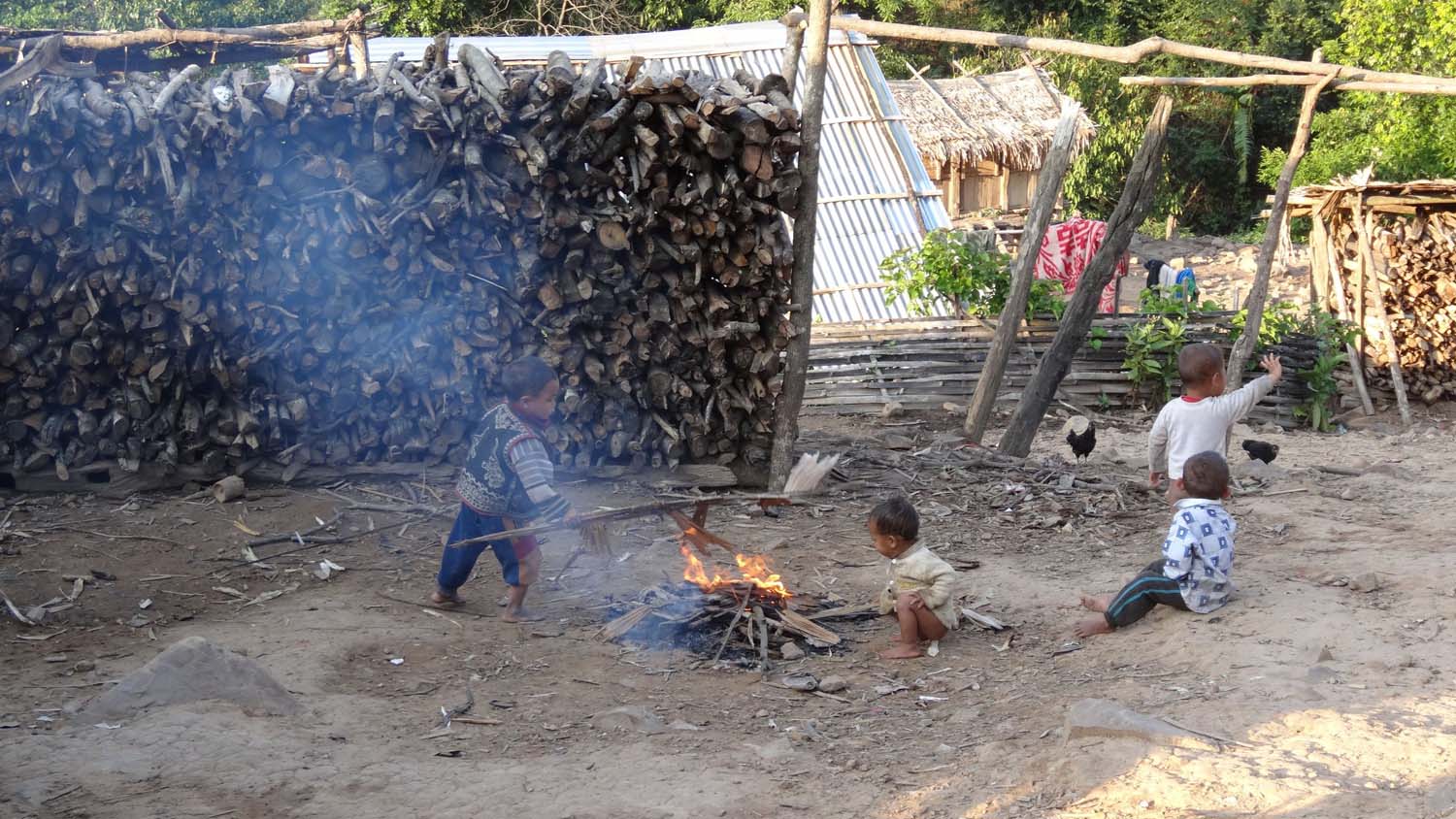 no supervision when building fires 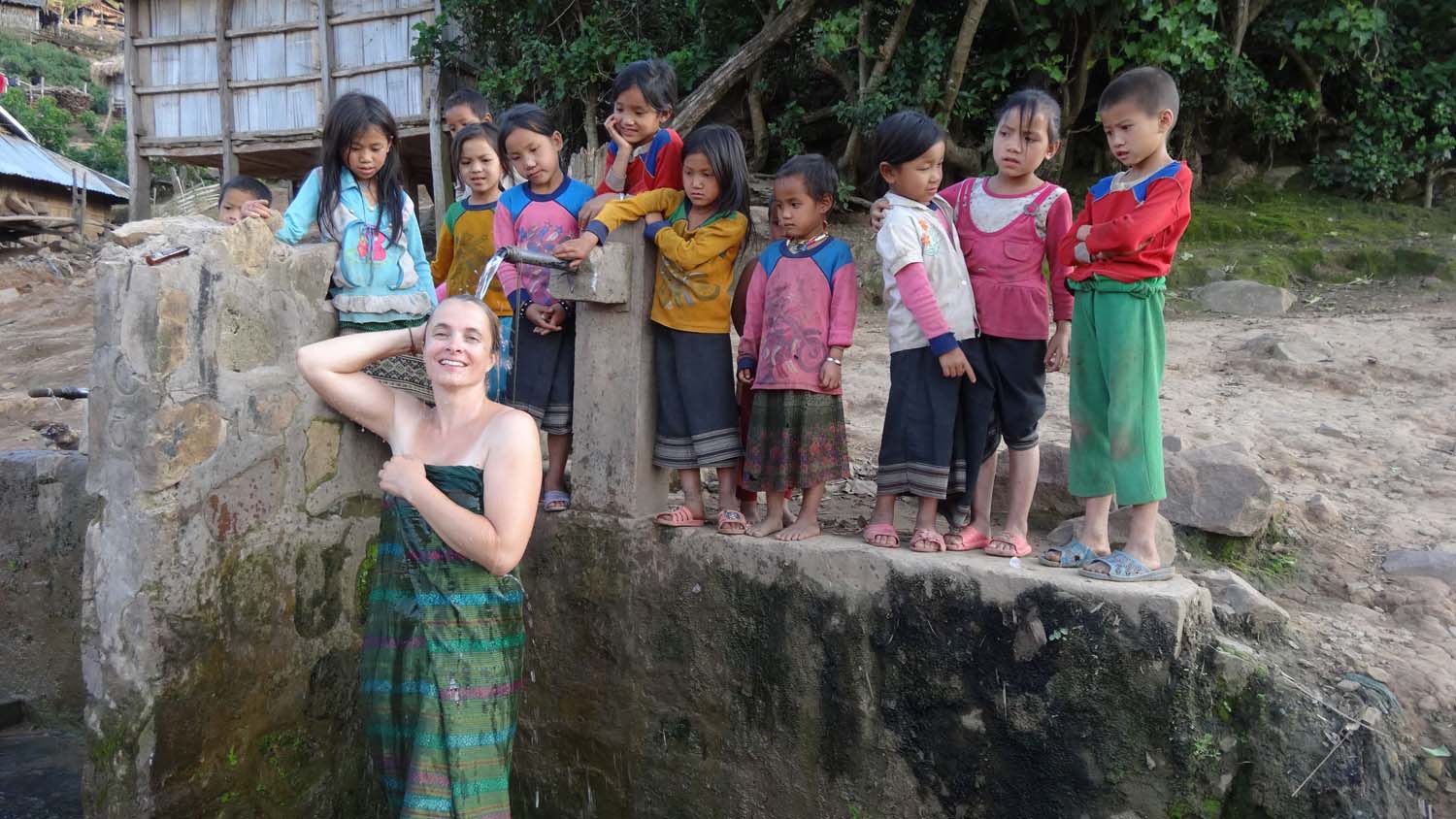 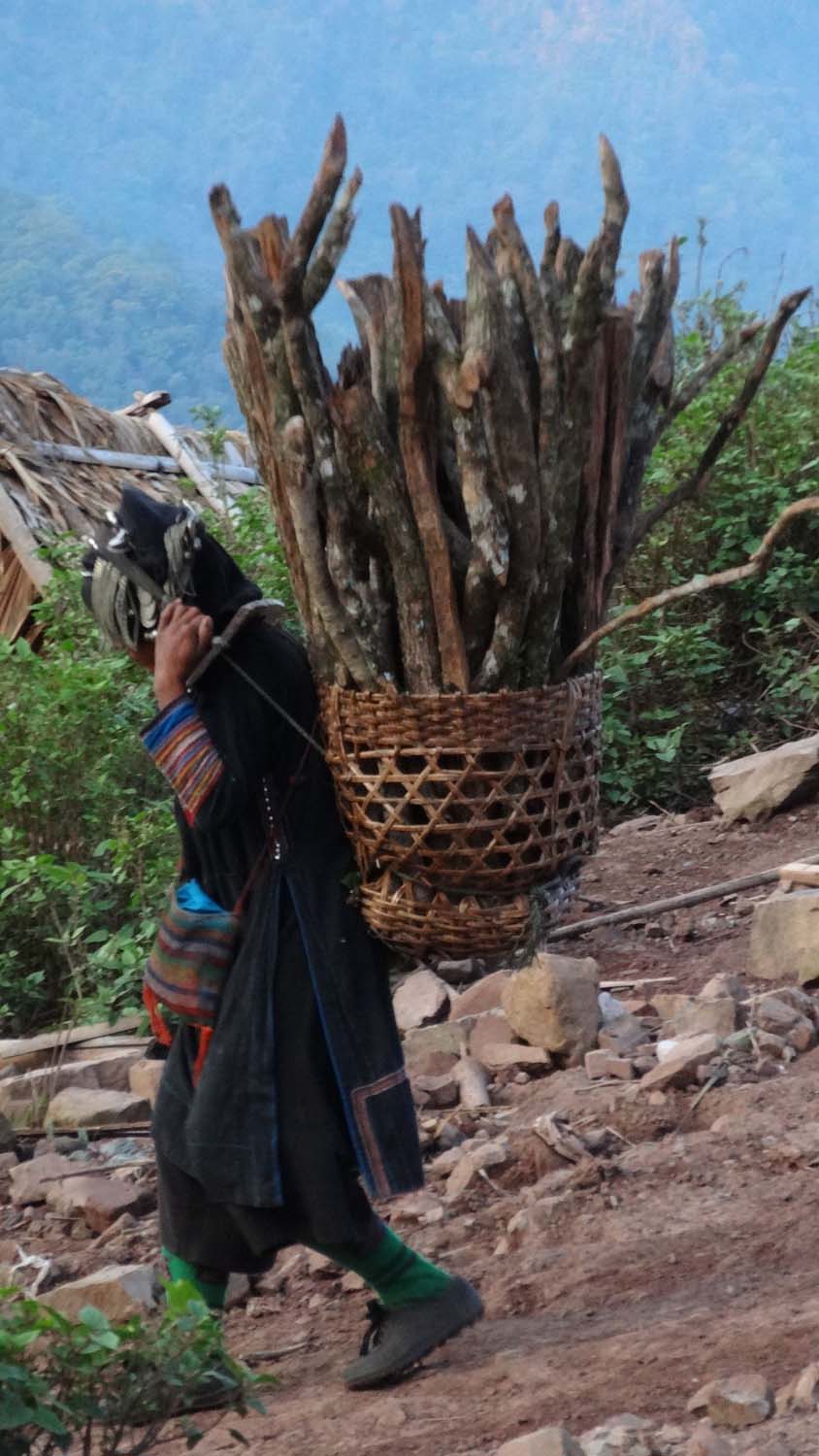 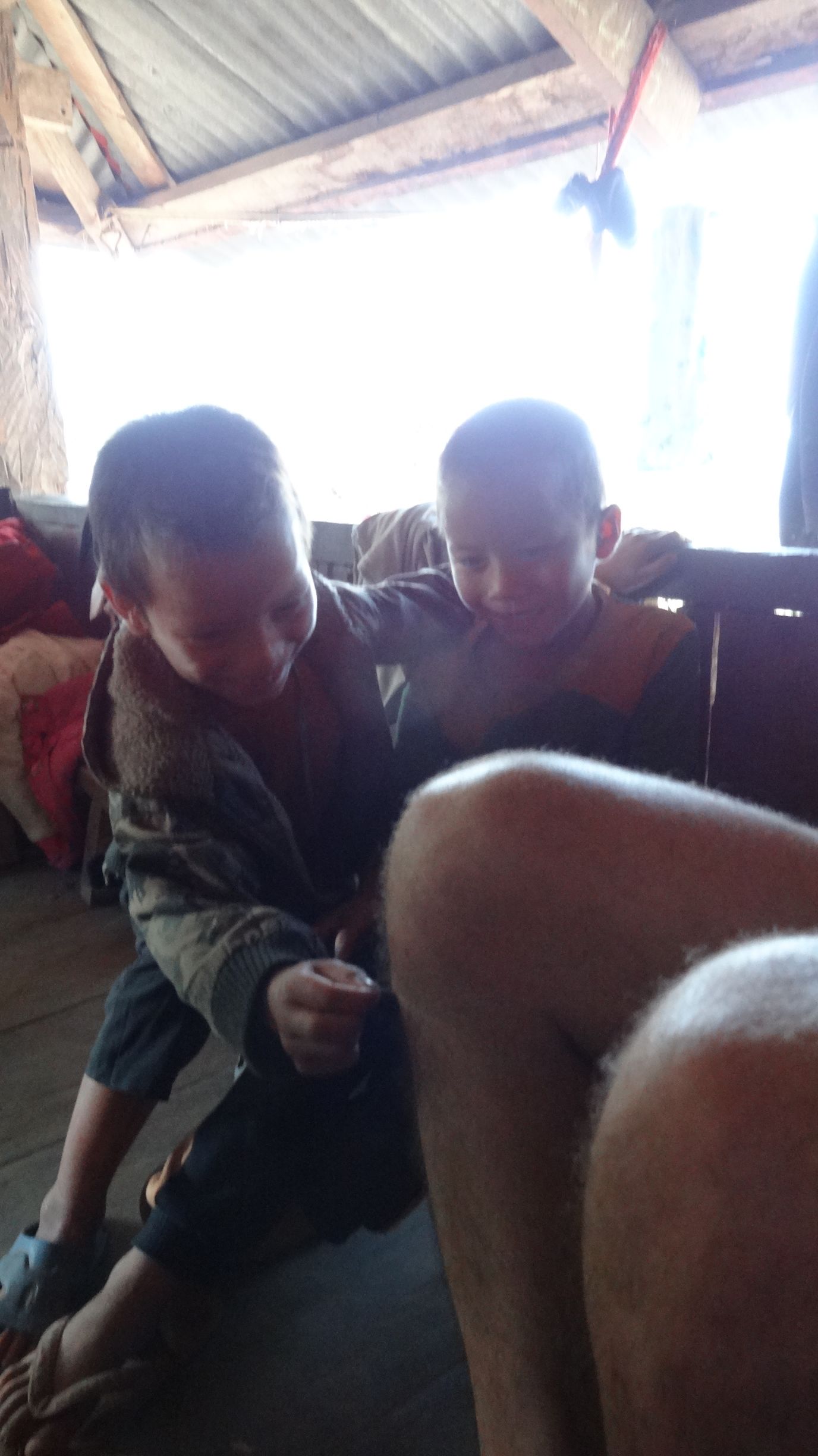 what?! hair on your legs? 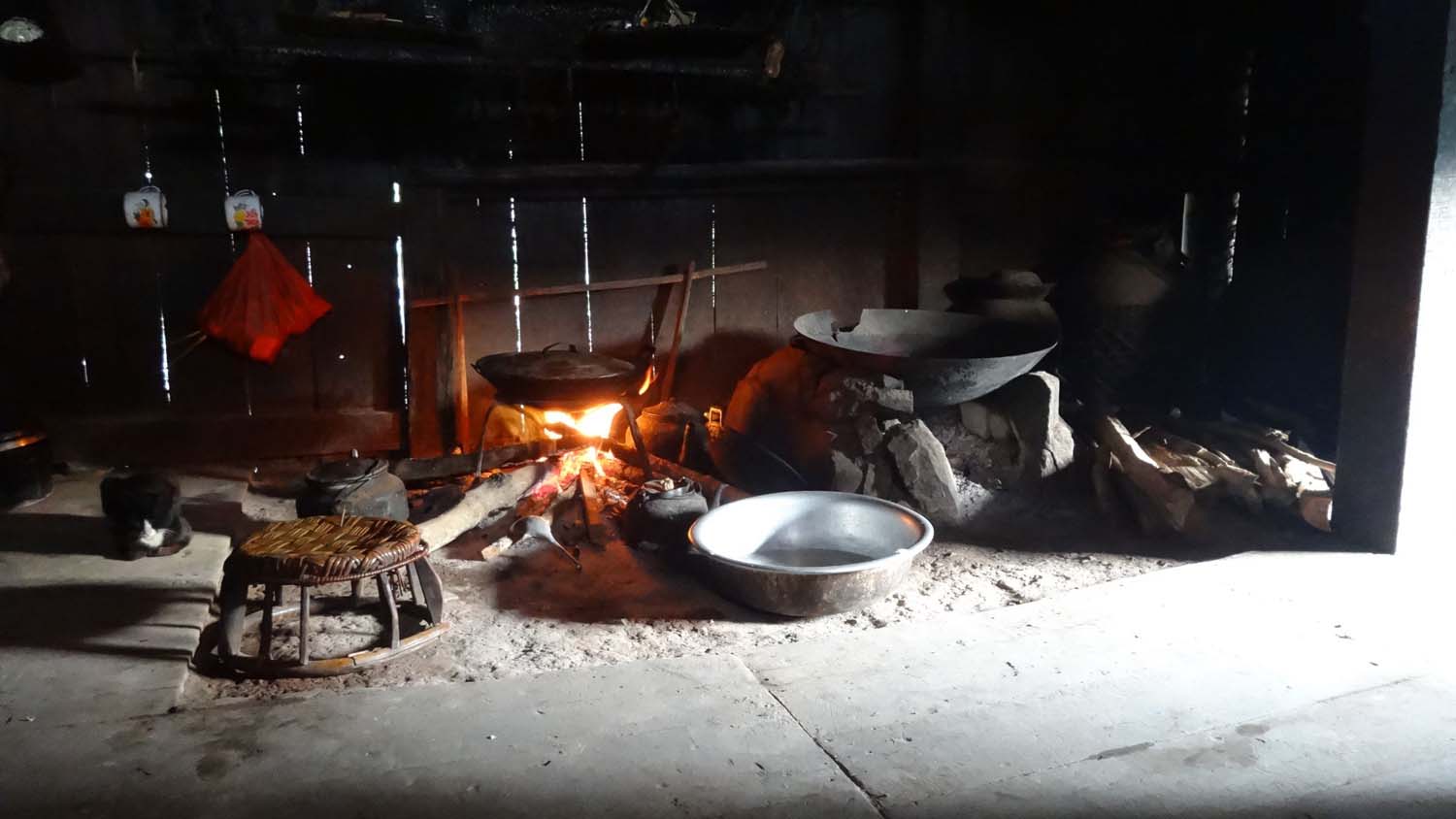 Boun Houng showed us the Akha swing, only used during New Year’s celebrations where multiple villages celebrate together and young men and women can invite each other onto the swing. This is their way of finding a partner (and the origin of swinging?) from outside their own village.

swinging in an Akha village

Dinner was in the chief’s house, again the food was amazing and all vegetarian, making it easy for us to share it all. Green, homebrew whiskey and green tea were served at dinner. Half way through dinner a rat fell from the ceiling, very odd as they are usually very agile, until we realised it had been zapped by the open electricity wire…

An Akha massage followed and then it was bedtime. They are early risers and this means getting into bed early too. We had asked if it was possible to help the family with their farming activities and were told we could help them plant rice if we wanted. It would be more than one hour hike to their fields and they would send one of the kids with us as a guide across the many small jungle trails.

The next morning it took us one and half hour to get there. It had been raining the whole way, the path was very slippery (that was our excuse why it took so long to get there) and I fell through the small bamboo bridge (who ate all the pies?!), but when we arrived at the field the rain cleared.

The family members living on the field were surprised to see us, but very proud and happy to let us help. They live out in the field so they don’t have to walk there each morning and back in the afternoon, saving them a lot of time.

Dvash and I were given a little basket with rice to strap around our waist and Damian and Jon received a bamboo pole each with a metal point to create a hole in the ground. We were helping them with planting mountain rice, not water rice (the rice you always see in the paddy fields). It’s rice that doesn’t need as much water and can grow without terraces needing to be created. 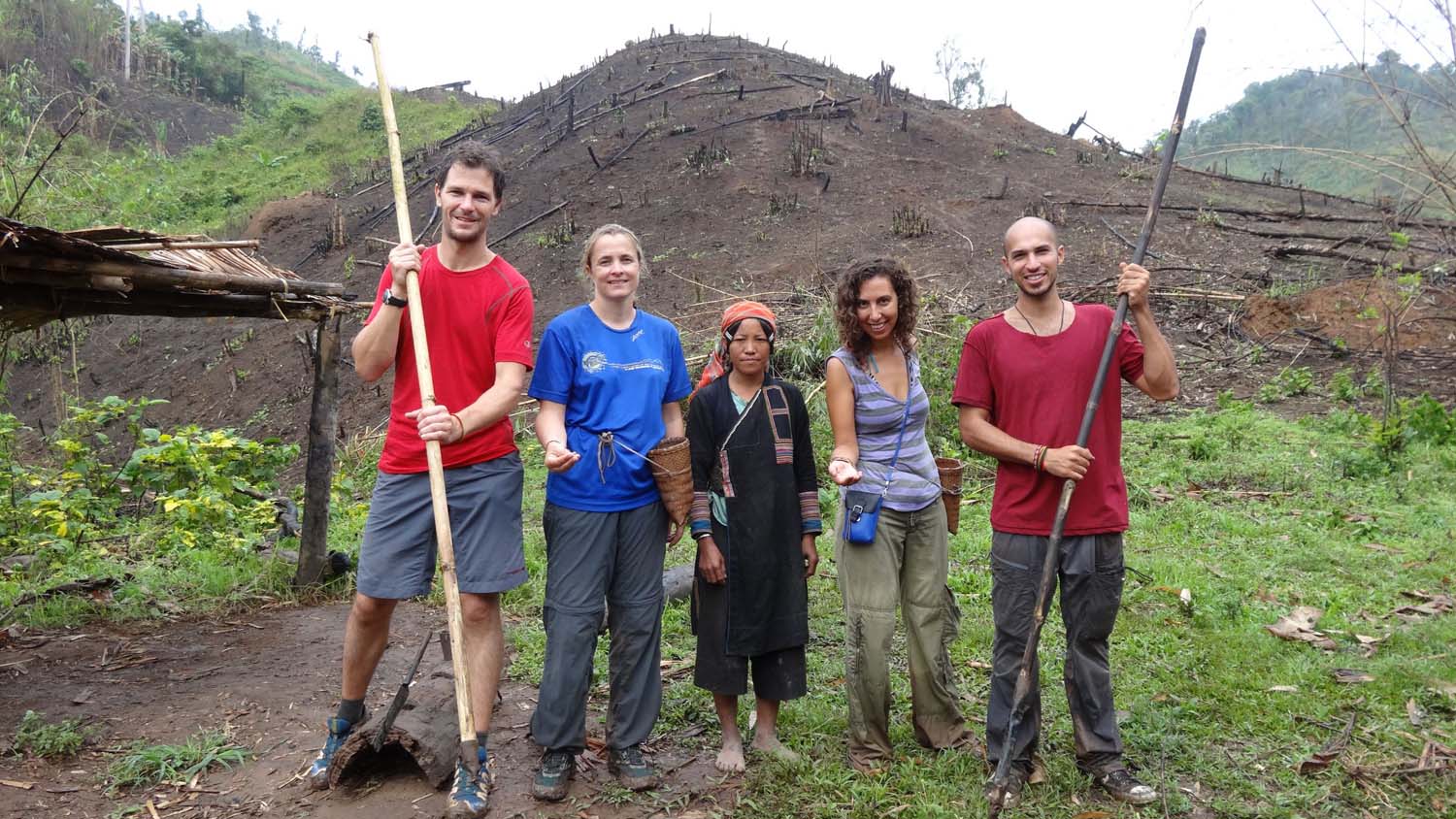 Soon we were getting the hang of it and planting like pro’s. Prod, prod, prod, sew, sew, sew. All to the rhythm of the Lao music they were playing whilst planting. Jon would make the holes and I would throw in a few grains of rice. We also swapped around, as the locals did, so we could get a feel for both jobs. We really enjoyed it, but after 2 or 3 hours we were ready for lunch! It was hard work. Check out Jon and Jude go farming (opens in you tube – 3.36 min) – we’ve finally managed to upload the video, enjoy! 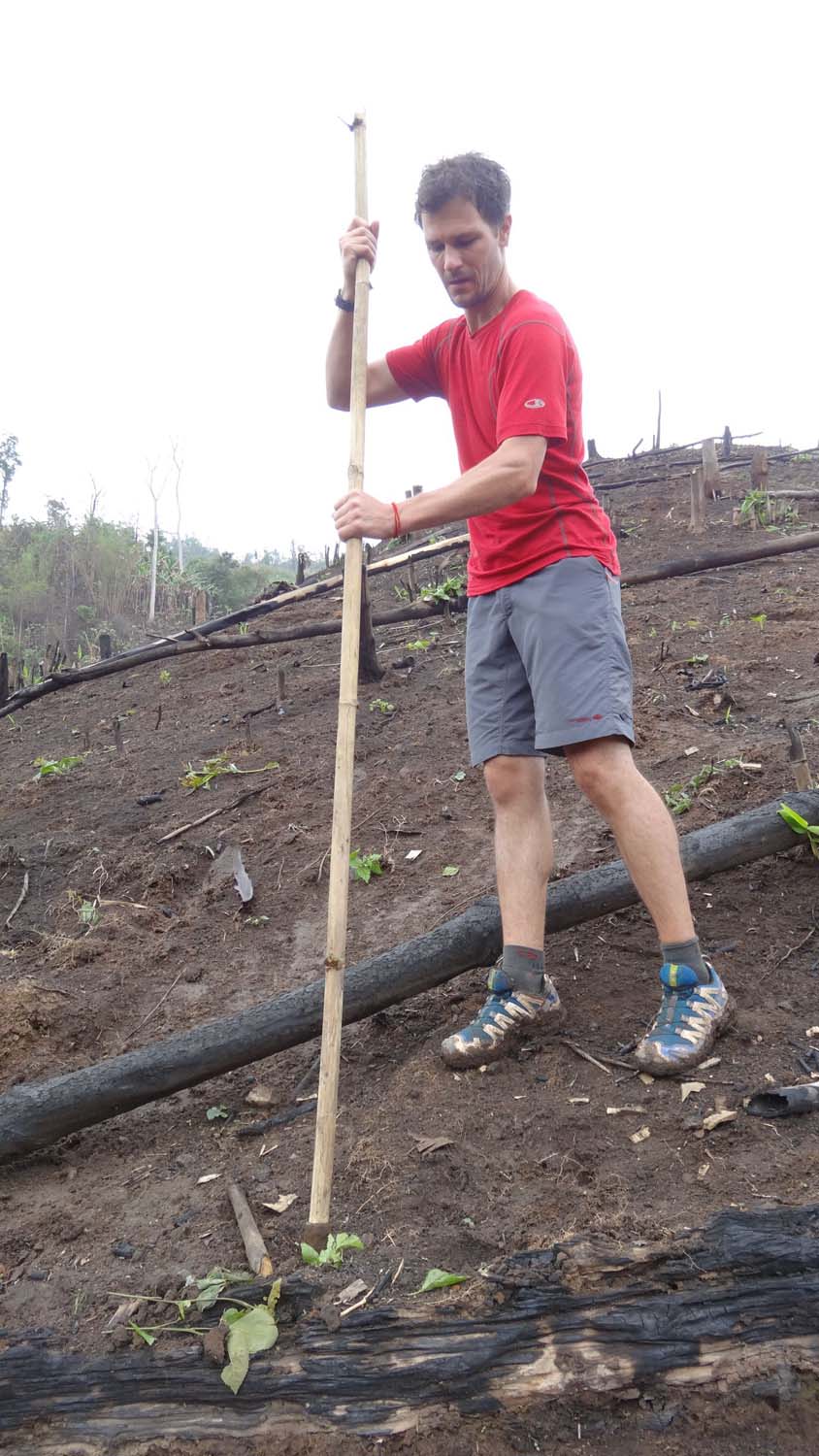 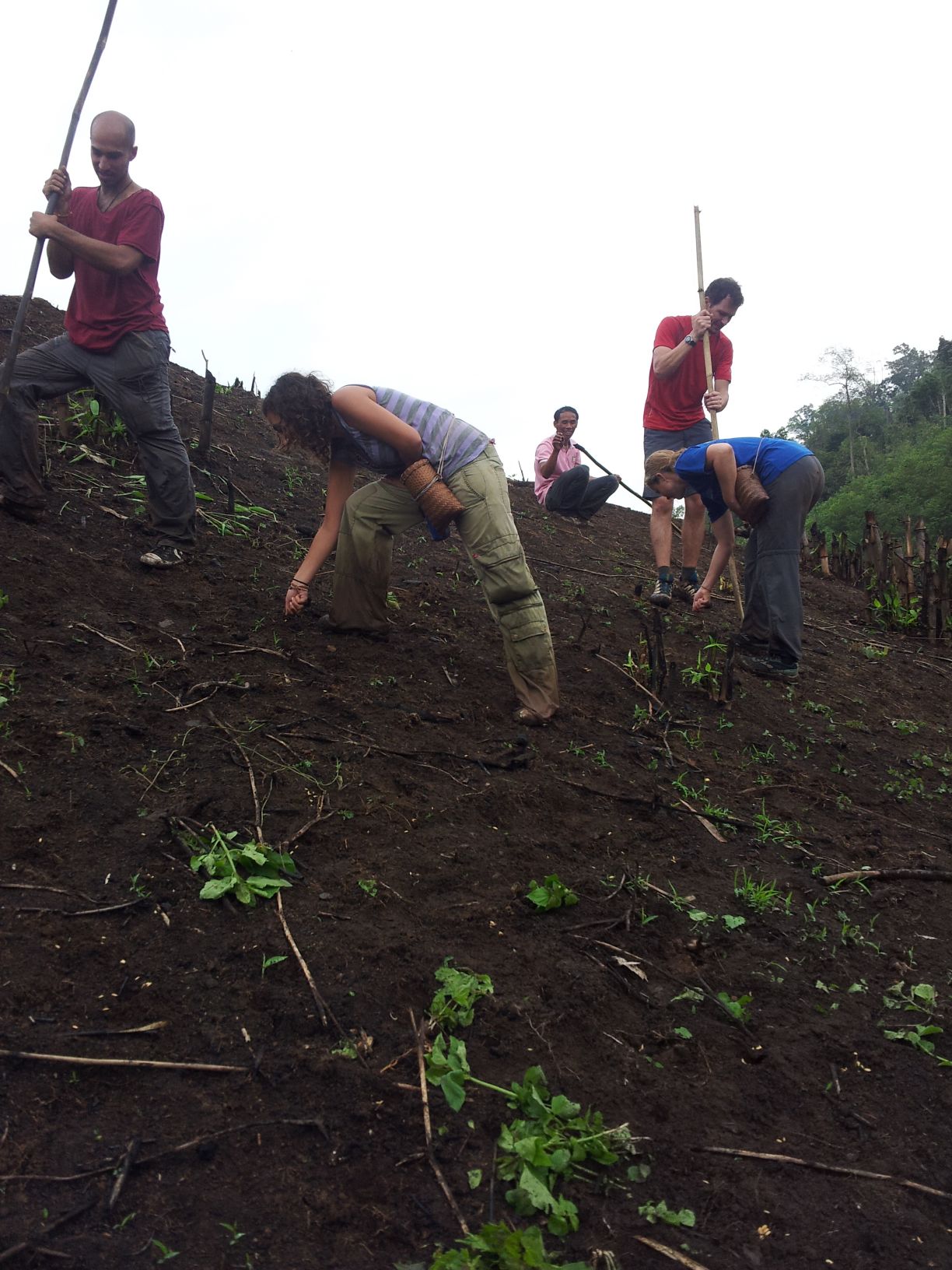 don’t think we will become farmers in Laos

After our fantastic, vegetarian lunch we hiked back to the village to pick up our bags and say goodbye. It had been an amazing time, but we still had to hike back to Boun Nueau. Damian and I decided to run most of it back, occasionally waiting for the others to catch up. We were going to have dinner at Boun Houng’s place that night. He was going to show us how to make the 2 dishes he had made us for lunch on the first day, but first we used his tap in the front garden for a much-needed bucket shower.

We bought the ingredients to make dessert, it was meant to be a bannofee pie, but had to be changed to a lime version as we couldn’t find bananas on the empty market. We had been back too late from the walk. His cousin and house mate also joined us for dinner, after cooking most of the dishes on an open fire in the little kitchen.

It was a great night. Fantastic food, some beers, an amazing dessert and the best company!

The 2 recipes from the dishes we made are below, unfortunately we were also too late on the market to buy the young pumpkins we needed for the second dish we had on the trek. Have fun making them!

Heat up the oil in a wok on an open fire and add the garlic.Fry for 1-2 minutes and add the tomatoes. Use a big spoon to squash the tomatoes. Add the eggs with the salt and keep stirring until the egg turns yellow. Eat with sticky rice.

Banoffee pie with a lime twist (for 7 people) 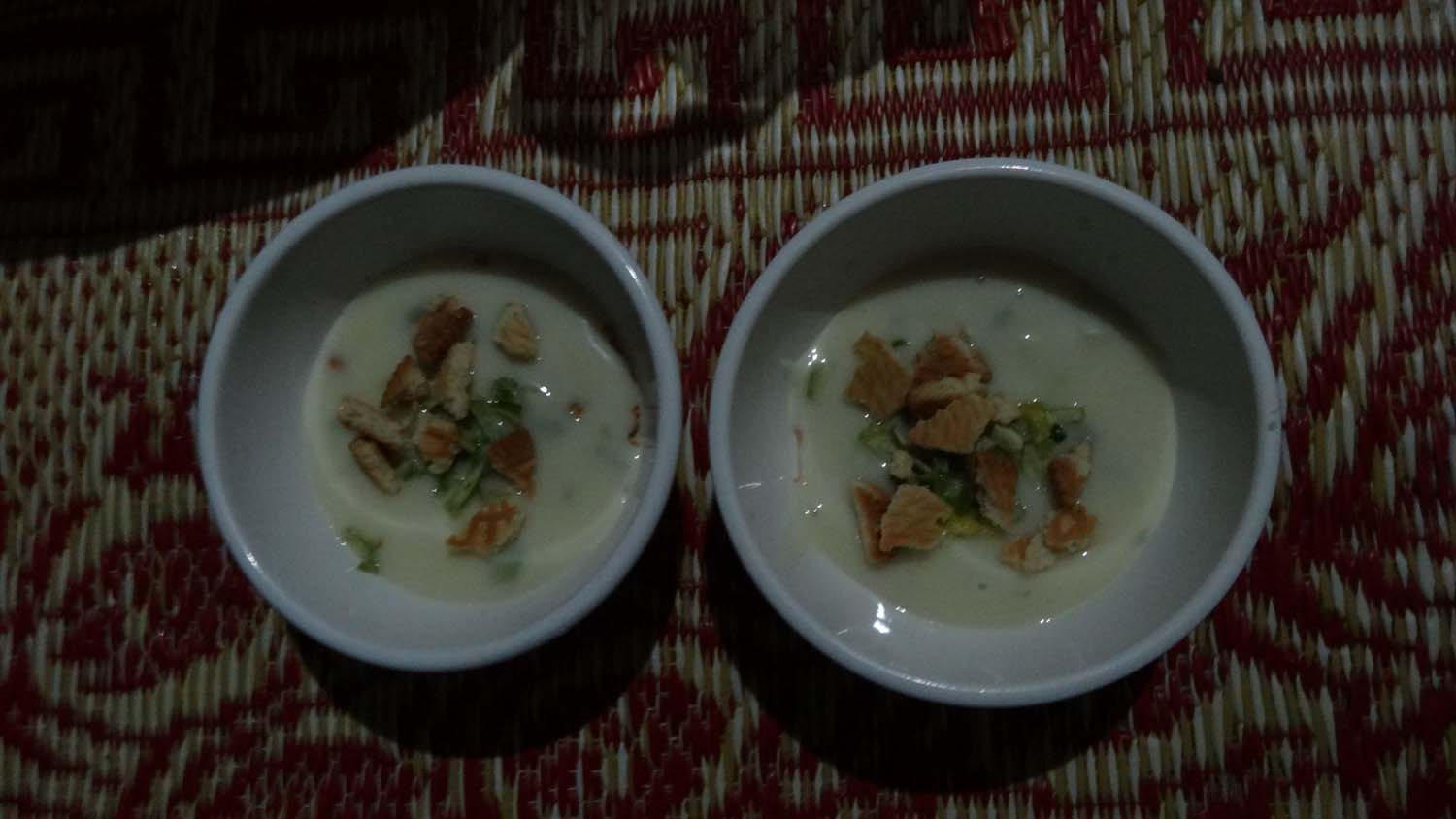 banoffee pie with a lime twist

Melt the butter and mix with the crumbed biscuits, put into the bottom of the bowls. Get some rind (we just used a knife to cut thin slices of the peel) of the limes before squeezing the lime juice into a bowl with the tin of sweetened condensed milk. Mix the lime juice with the milk and add some of the rind. Pour the mixture over the crumbed biscuits. Use some of the leftover lime rind and bits of biscuits to decorate. No fridge or oven required.