Two countries with a confusing history, we’ll try to give you a brief history lesson here in case you also need it (we certainly did).

At the end of the First World War (in 1922) Palestine became a mandate of the British Empire when they dissolved the Ottoman Empire. Palestine at the time consisted of what is now called Israel, Palestine and Jordan.

After the Second World War (in 1947) the UN (as a very new company) accepted the suggestion to split Palestine into a zone for the Jewish people (Israel), and a zone for the Arab people (Palestine). In this proposal Jerusalem was to be a separate body with a special legal and political status, administered by the UN. This is because a lot of historical, religious sites are thought to be (according to the religious books) located within this city and both Israel and Palestine want Jerusalem to be their capital. 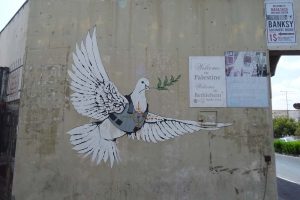 the armored dove, one of several pieces of art created by Banksy in Palestine

With this suggestion on the table the British withdrew from the region on 14 May 1948, but the Arab people rejected the idea. However, one day prior to the end of the British Mandate the Jews of the British Palestine declared the independence of the State of Israel. Civil war broke out afterwards.

Many things have happened since this turbulent beginning, but one of the core issues in the Israel–Palestinian conflict is the status of Jerusalem, as the UN never established the suggested separate body. In 1980 Israel declared Jerusalem to be the capital, but this is not recognised by the international community.

Israelis object to the name Palestine and call the area the West Bank. And when you visit for example Bethlehem, you cross a heavily guarded border with an 8m high (!) concrete wall extending into both directions. Every person our age remembers The Wall in Berlin, separating east- and west Germany, but we were shocked to see a concrete wall here too, twice the height of the German wall. It doesn’t just enclose an area, it randomly zigzags around fields and homes, at times splitting families who can no longer pop over to each other for a cuppa.

We struggled to make sense of it all.

The people living there are trapped, and even though they have an airport within the closed-off area, they cannot use it. There are people who have jobs across the border, for example in Jerusalem, so they cross the border on a daily basis. Others, without permits, can’t, and this creates difficulties when they try to get to a hospital when they are sick or when they simply want to visit family on the other side.

Many intelligent people have been trying to broker peace in these lands, but the solution has still not been found. To us, non-religious folk, the solution seems simple. Create two countries with the same capital, all problems solved?

The reason we came to Israel was to meet Jude’s teammate for the world championships adventure racing in Reunion as she lives there. And as they had never met, the plan was hatched to visit Israel and do some training together before the race.

After arrival we spent two days exploring Jerusalem. Of course we visited the Western Wall, walked the Via Dolorosa, hiked to the top of the Mount of Olives and the Chapel of the Ascension (where Jesus is believed to ascend to heaven after his resurrection) via the Tomb of the Virgin Mary, the Grotto of Gethsemane (where Jesus went to pray the night before he was crucified) and the Garden of Gethsemane with the Church of all Nations.

Back in the centre we entered the Church of the Holy Sepulchre, where fights erupted in the queue to see the grave of Jesus (this religious stuff seems to truly bring out the best in people…), queued to enter the wooden walkway to the Temple Mount and the Dome of the Rock, ate and drank our way through the Yehudai Mahani (Jewish market), and sauntered up the ramparts of the old city’s fortified walls. 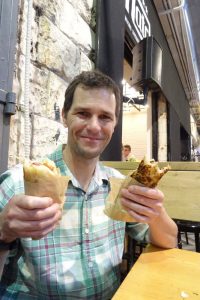 Jon eating a Jahnun in the Yehudai markets, they were pretty good

One of the highlights of being a tourist in Jerusalem was the tour with our guide Yoni into the tunnels underneath the Western Wall. Highly recommended if you are in the area. We were lucky we picked the last tour of the day as that meant we had to walk back the same way instead of popping out at the far end of the western wall. Another highlight was drinking a glass of wine and enjoying a cheese platter in the aptly named Cheese and Wine restaurant on the roof terrace of the Notre Dame of Jerusalem Centre. Built as a hostel for French pilgrims in 1888 it still serves as a guesthouse for the many pilgrims of all nationalities today. 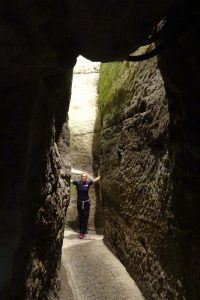 Jude in the underground tunnels, our guide was excellent 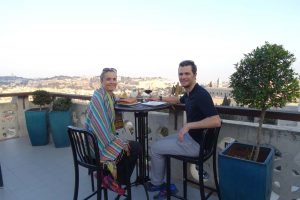 Before we went underground to see the tunnels, we took a little local bus to checkpoint 300, the cheapest way to get to Bethlehem, where we wanted to visit the Church of Nativity. It’s a very interesting church, but we were rather disappointed there were no three wise men, no baby Jesus, Maria, or Jospeh in the cave. No sign of the donkeys or the sheep either… At least there was no fighting or pushing in this queue… 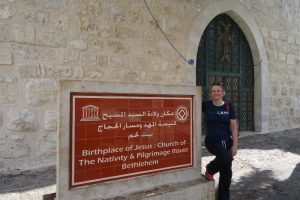 apparently this is the birth place of Jesus

We did find some Banksy art, and read many of the moving stories written on the wall. We also had a chat with a Christian lady who now runs a gift shop in her house, the wall, 8m high concrete slabs, looping around her home on three sides, cutting them off from fields, their family, and their jobs. This needs to end, the wall needs to come down and Israel and Palestine need to live in peace next to each other. Governments, but also a lot of Jewish people we discovered, need to pull their heads in and deal with this in a humane manner. 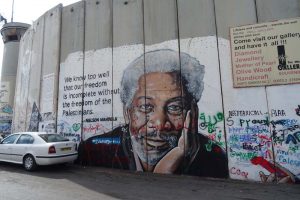 a different wall, here people really have a reason to cry

We hopped on a bus south to meet with Carin in Beer Sheva. She certainly asserted herself in the first hour as we drove down to Midreshet, the dessert town where David Ben-Gurion, Israel’s first prime-minister, is buried. It appeared desolate, dry and hot. Full of army people as the Israelis seem to have a base everywhere. But we enjoyed the mountain biking and hiking through the rocky canyons, and were lucky enough to see the Nubian ibex, a fox, a Lanner falcon and some Rüppell’s Griffon vultures. On the way back north to her house we stopped in Avdat, one of the stations on the ancient Incense Route which extended from the Arabian Peninsula to Gaza, and from there to all parts of the Roman Empire. 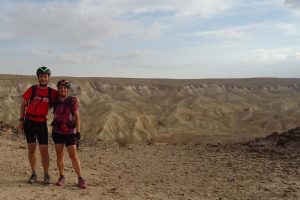 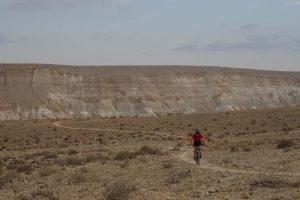 Jon riding in the Negev desert in Israel 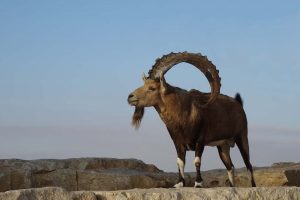 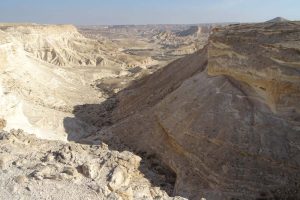 stunning views over the Negev desert 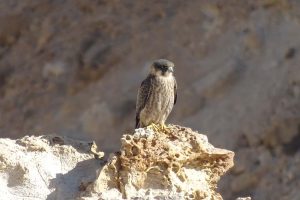 a lanner falcon perched in the Negev valley

Carin had generously invited us into her lovely home, close to the beach, in the small village of Dor. It baffles us how people can be so hospitable on one side, and rude and acting superior to others, as they certainly made us feel very welcome. The contrast however is huge.

We went on some runs, swam around a little island, went for a short paddle on the Mediterranean, and even an open-air concert in a large Roman amphitheatre by the sea, part of the Caesarea ruins. A stunning setting for an evening listening to the tunes of America, famous for their song ‘A Horse With No Name’. More walks in the hills and a visit to the lovely Tishbi winery for some obligatory tasting. Pairing it with superb chocolate is definitely a winner. 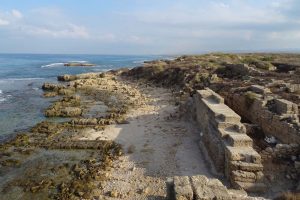 the Mediteranean coast here is full of ruins 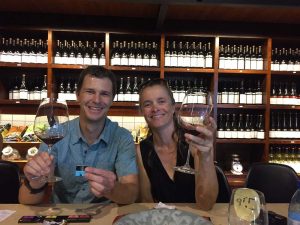 exquisite chocolate and good wine at the Tishbi winery

A trip to do a longer hike in the Yehudiya Forest Nature Reserve near the Sea of Galilee was slightly cut short as some of the trails were closed, but the hike we did with Carin and her daughter Nicole, who was home for a few days before heading off to Jerusalem to start uni, was stunning. A dip in the Zavitan Hexagon Pools before hiking down to the Zavitan waterfall was refreshing, and on the way back we spotted gazelles, hyrax, a Palestine sunbird, and a Chukar partridge. 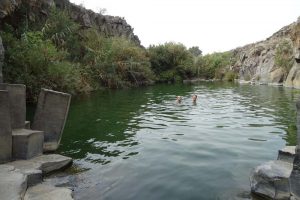 a refreshing swim in the Zavitan Hexagon Pools

The exploring of this small country continued with a trip to Mt Bental where we had a drink at Coffee Anan, whilst looking out over the Golan Heights and Syria (Damascus is only 60km from here) from the bunkers dug out on top of the mountain. On the way home we explored Nimrod’s Fortress, having to wait a few minutes because the heavens opened up as we arrived in the carpark. It is a medieval Muslim fortress from 1228, built to stop the Crusaders from invading Damascus. Today it is an impressive ruin on the top of a hill with spectacular views to the surrounding country side. 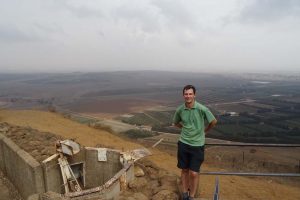 Jon in the Golan Heights, Damascus is not far from here 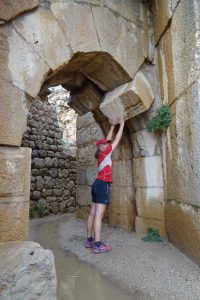 Jude holding up the massive bricks at Nimrod’s Fortress

As Carin had a family gathering, we were given her car to explore on our final day in Israel. We went for a hike in Carmel Mountain NP, before a late lunch in Akko where we wandered the ancient streets and walked the underground Templar’s Tunnel that led from the fort to the port. 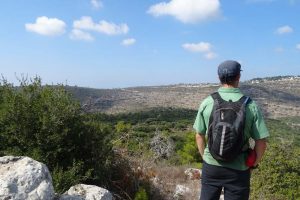 A final walk in the Carmel Mountain NP

The next morning Carin dropped us off at the station for our train to the airport. Like sardines in a can we travelled the first few stops until it luckily emptied out a little and we found a place to sit. The process to get out of the country was smooth, and, without a stamp in our passports (having a stamp from Israel in your passport prevents you from entering many other countries so they no longer give stamps to tourists), we were soon on our way home again.