After saying our goodbyes in Škofja Loka, we drove straight through Austria, without stopping, into Germany. We spent the whole day driving and finally ended up in Stuttgart. Jon, the car lover, had figured out we could spend the night here, visit the Porsche Museum in the morning and still be in Paris the following night to catch up with Alan and Elaine. 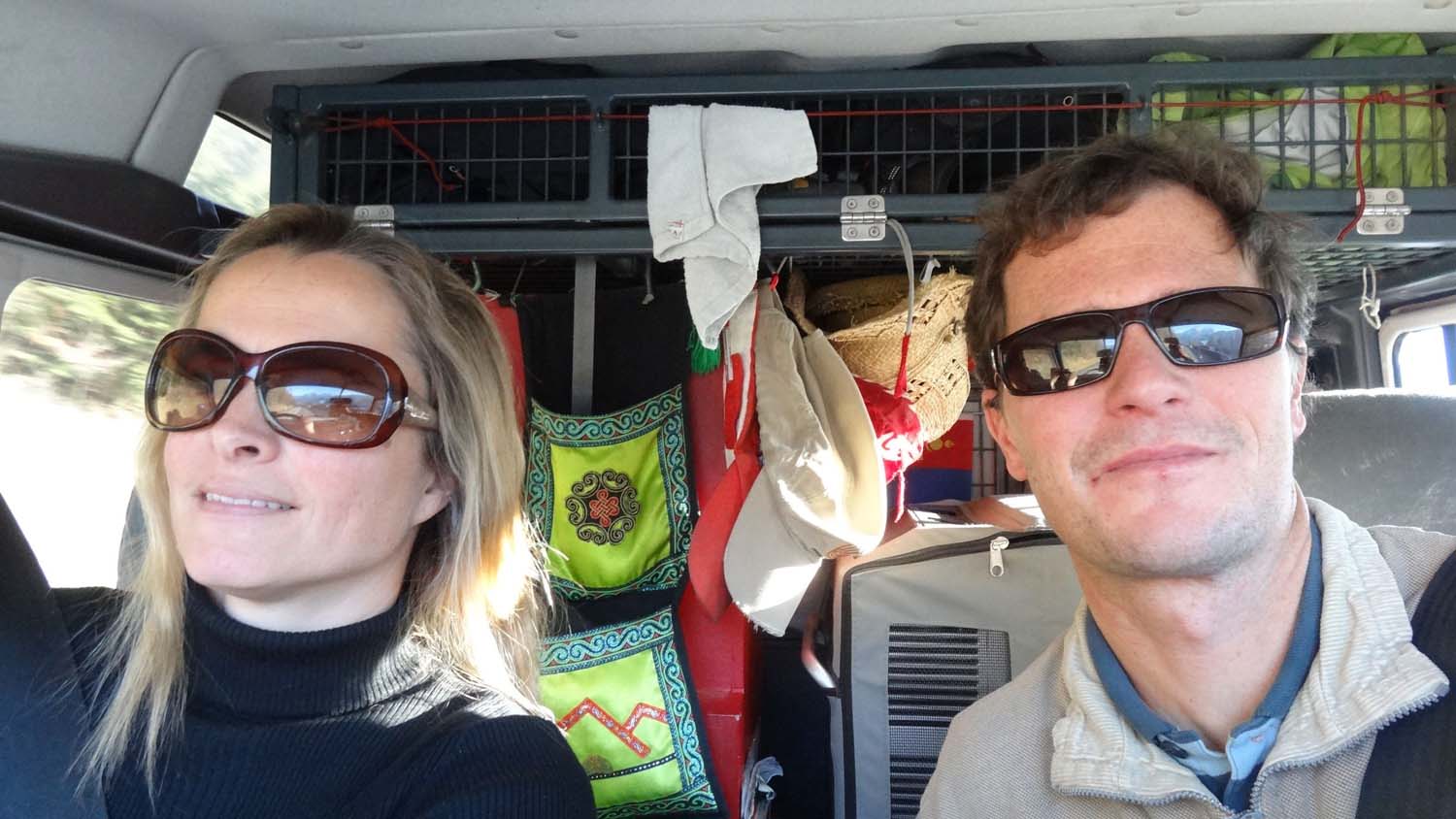 driving the last kilometers in Europe 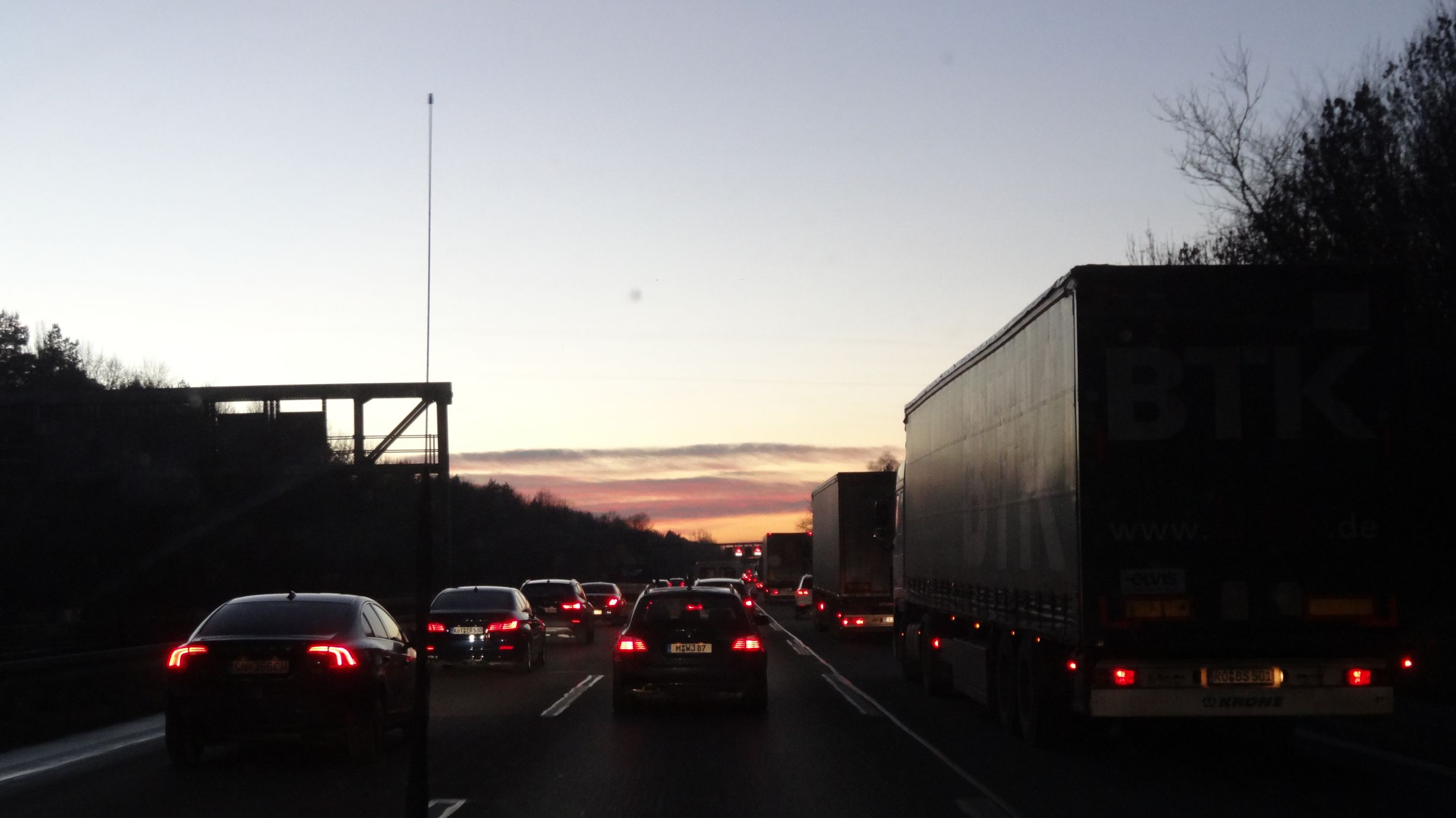 welcome to traffic in Europe

As you can imagine there aren’t many great overnight places in a town like Stuttgart, and we ended up using one of the campervan spots in a carpark in a nearby village. It was pretty disappointing as the last campsite of the trip and we attracted quite a bit of attention from the locals the next morning when we were cooking porridge for breakfast. 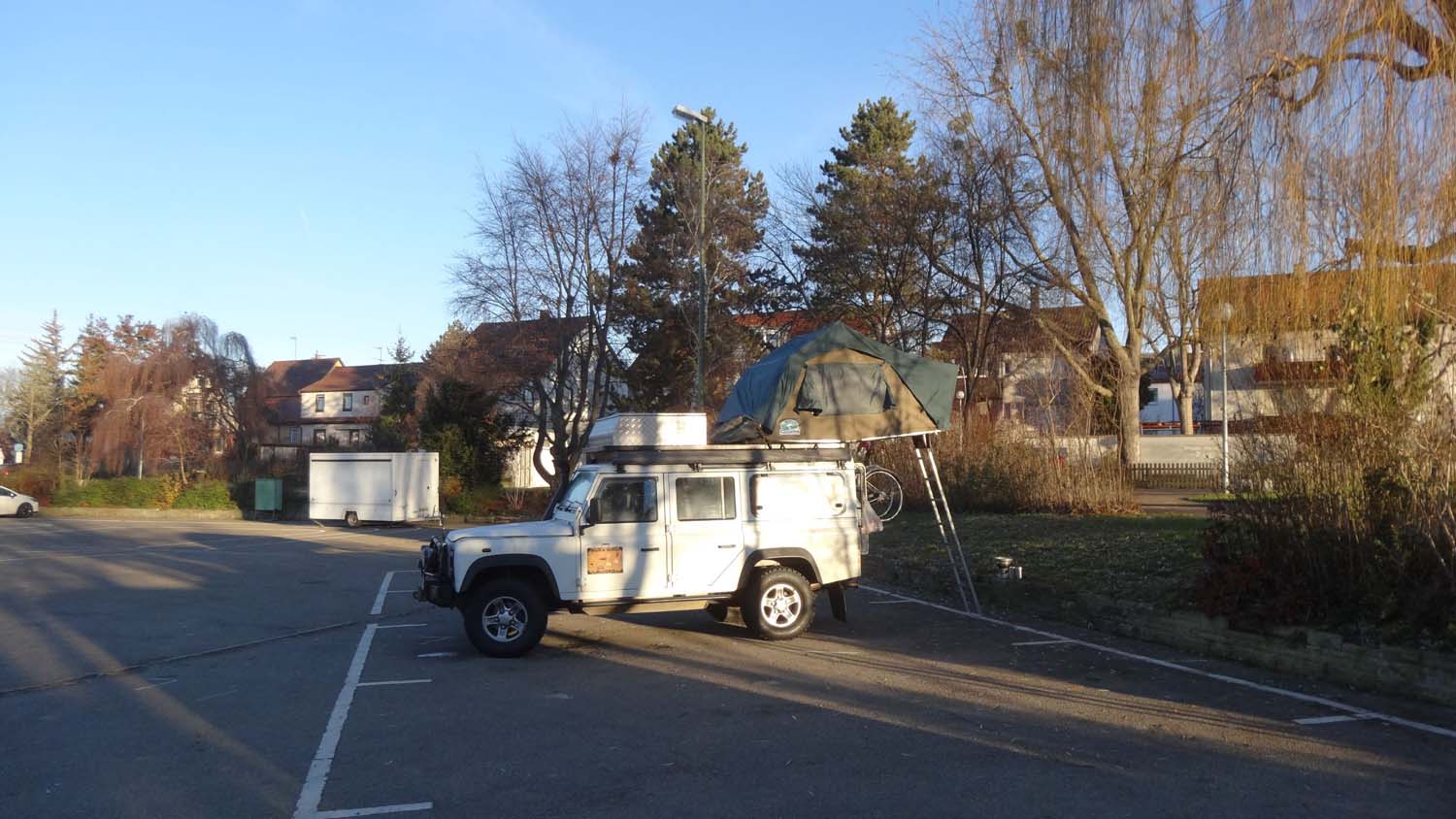 our last campsite of the trip – not our favourite

The Porsche Museum was excellent and we spent a few hours admiring the wide range of cars they have on display, including the famous Pig and Jon’s favourite Porsche, the 904 Le Mans racer from the 60’s. 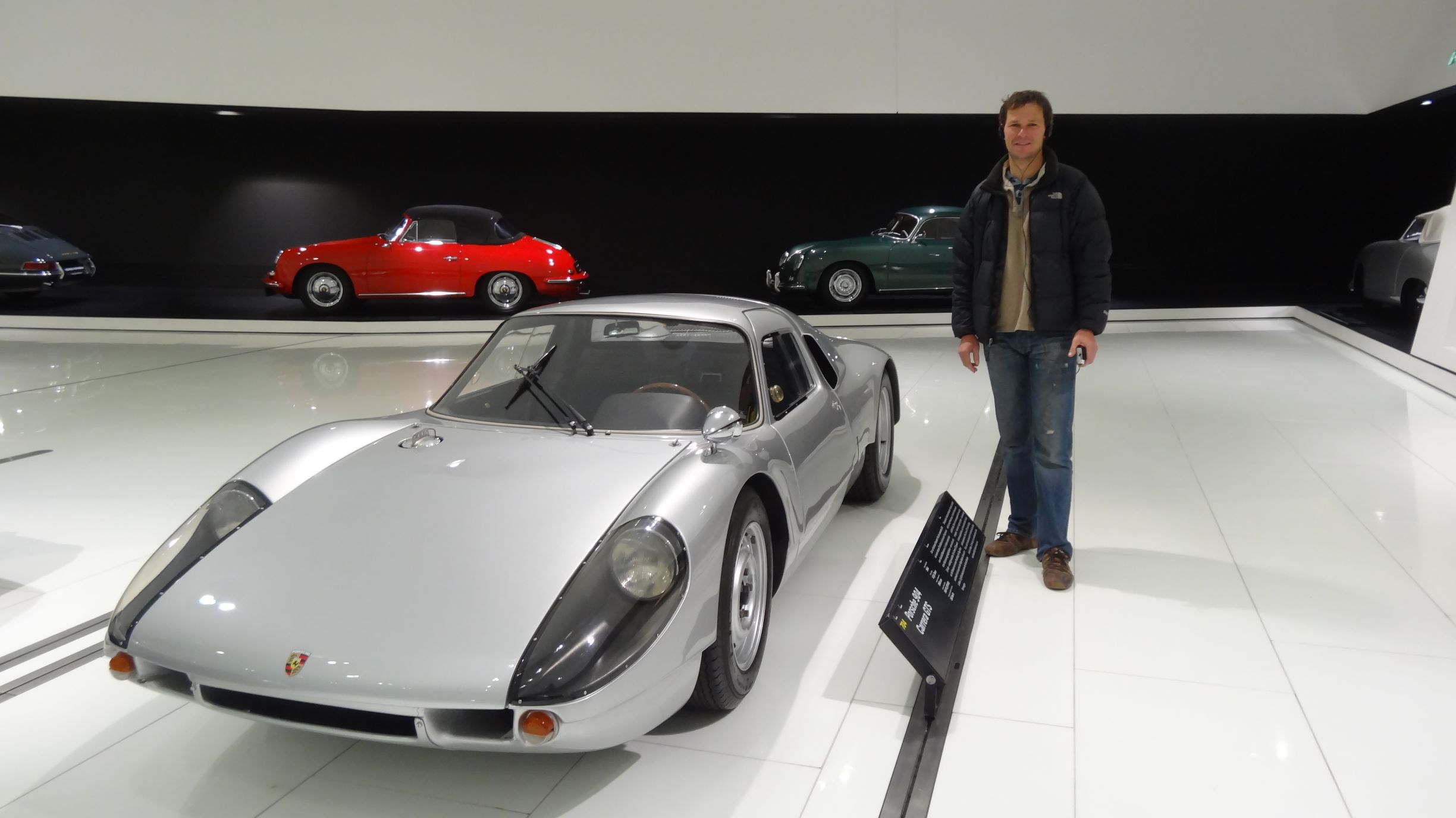 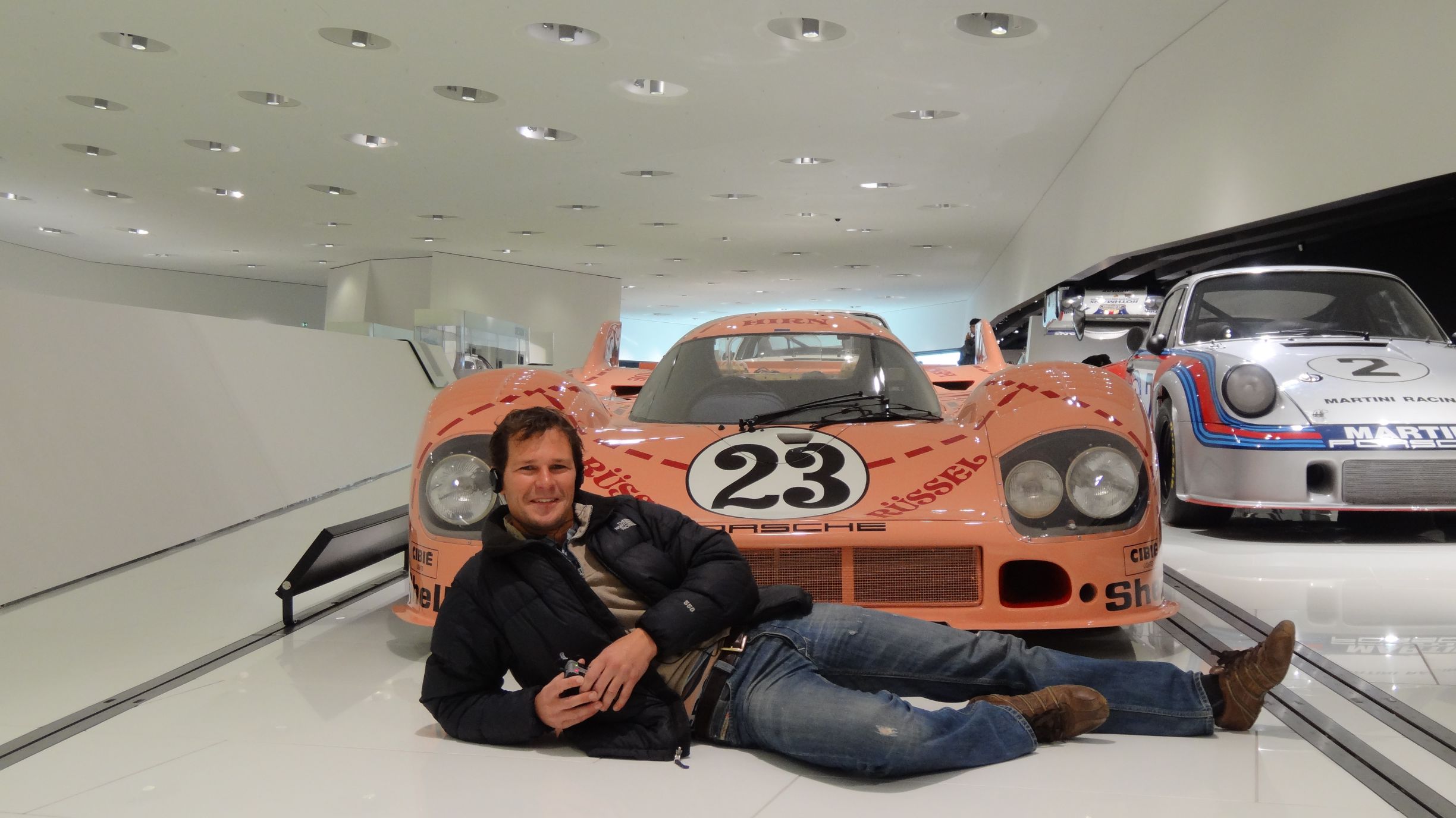 To avoid a detour to get into France, Jon suggested a shortcut which would take us off the motorways for 10km and back onto the very expensive French toll roads at the other end. We didn’t know, but the shortcut took us across the border on a small, free ferry across the Rhine. It was a bit dubious if we would fit as the maximum height signs wanted us to be no higher than 2.2m. The ferry workers told us if we fitted underneath the barrier we would be fine. The barrier was probably at least 2.7m and we were allowed on board. A grand total of 5 cars fitted in a circle on the ferry which was powered by the current. A novel way to cross a border. 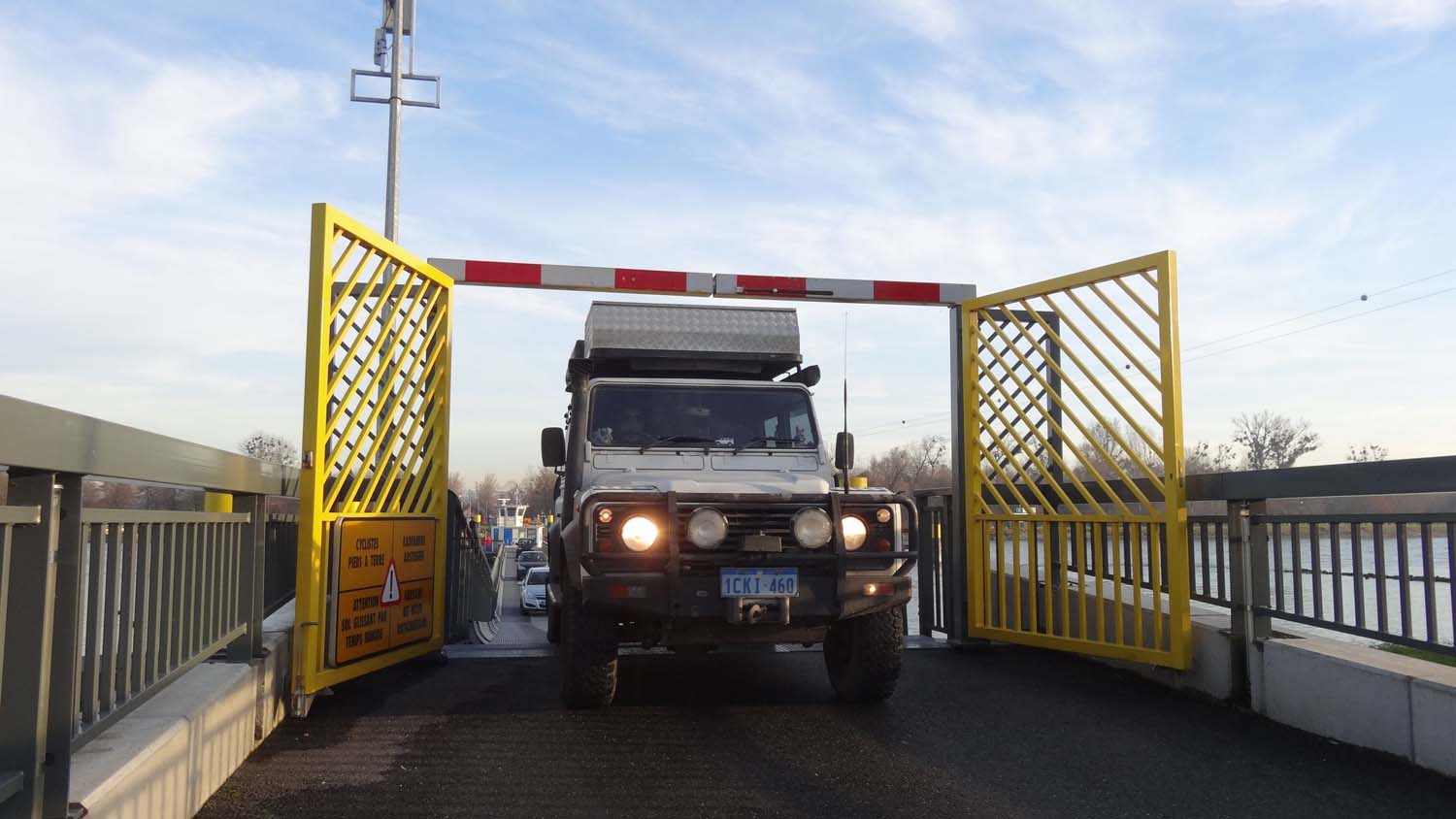 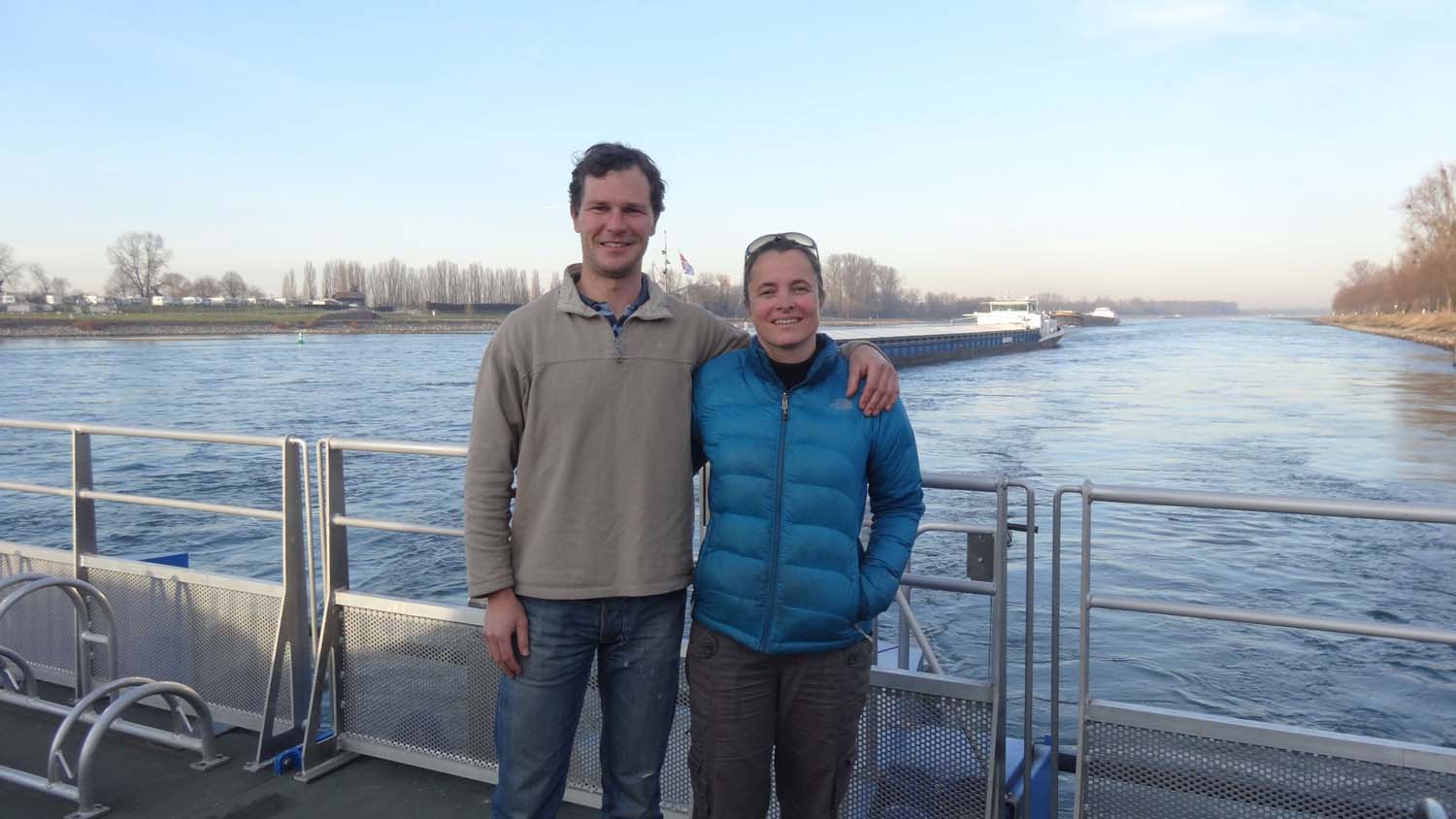 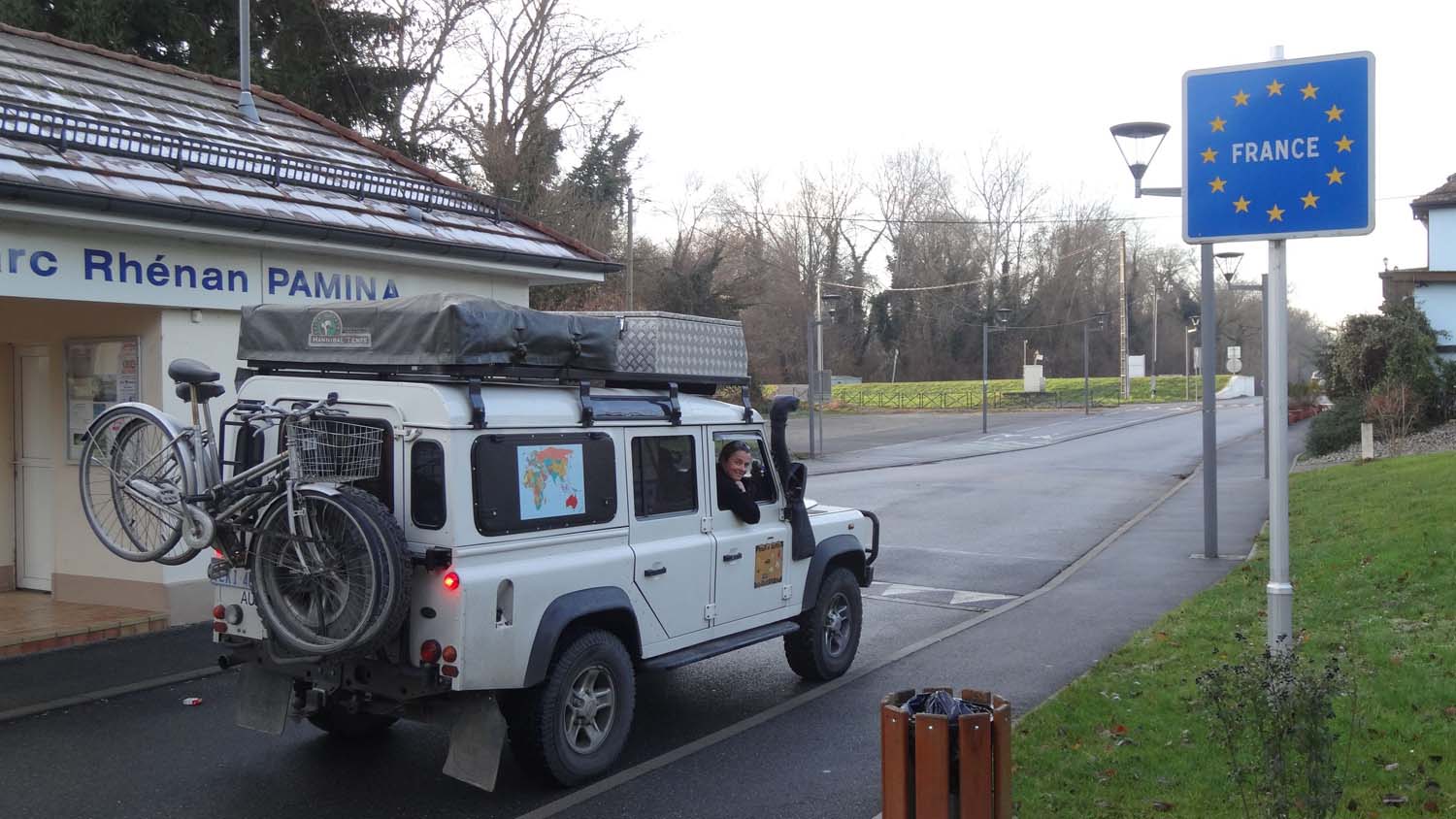 and we roll into France

First we paid the exorbitant French toll with notes and coins, but we soon swiped our credit card. It somehow seemed less expensive that way… and we were rapidly running out of cash. As we were without local simcard we were relying on free wifi en route to find out how we would get to Alan and Elaine’s place as we had forgotten to download the relevant GPS map. And that’s when France proved to be better than Germany! No free wifi in Germany, but plenty of it at the motorway stops in France. We managed to get an idea of their location, were given some secret codes to let ourselves into the apartment block and then we threw ourselves at the mercy of Parisian traffic. We were lucky it was after rush hour when we entered the inner circle of grand avenues and mansions and the only problem was our rear right Lada brake had reached its limit of usefulness and was sounding worse by the minute. We were afraid we would have to explain ourselves to the French police, but luckily arrived at our destination before being detected. 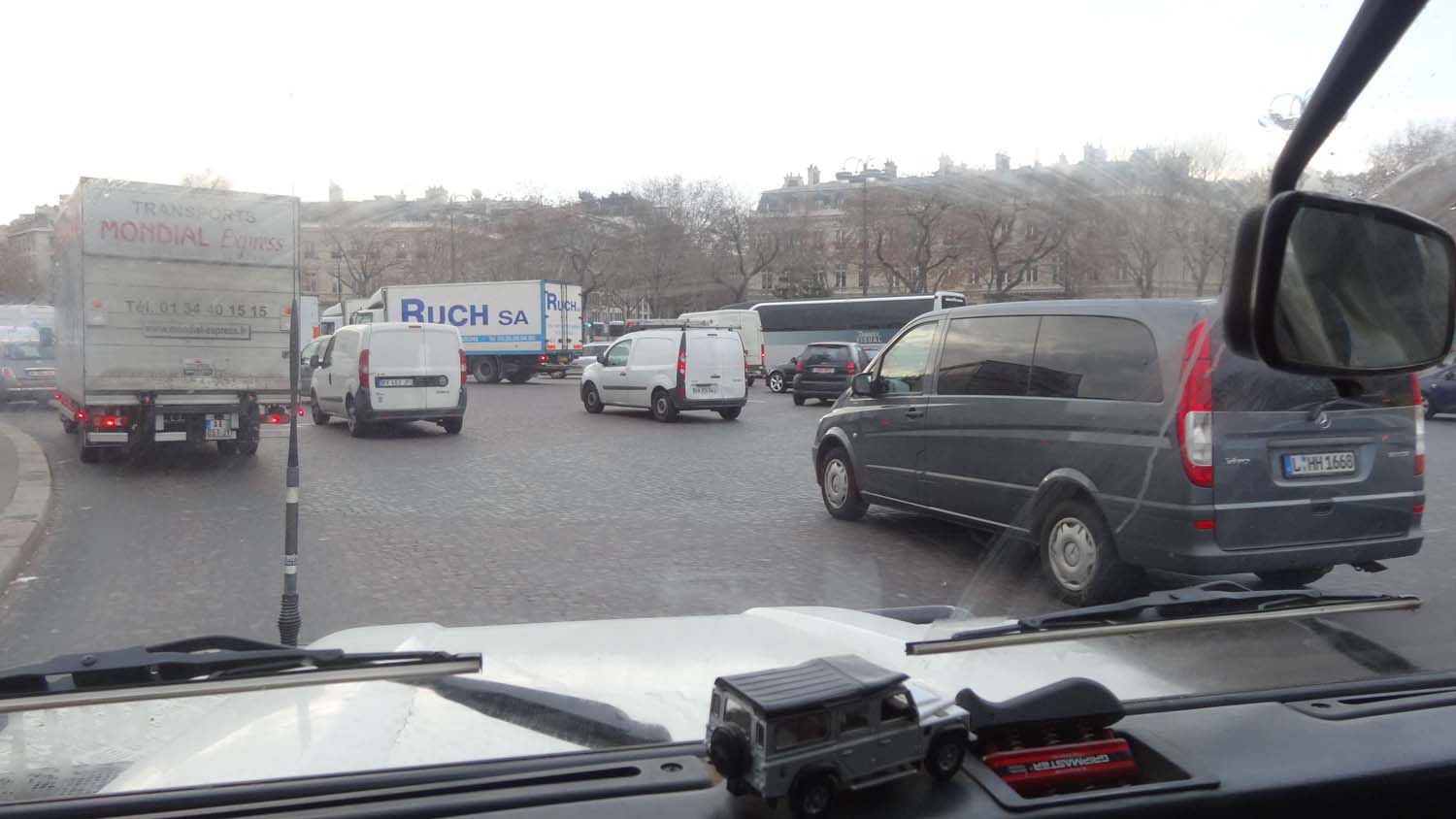 traffic around the Arc de Triomphe

Parking at night wasn’t an issue, but Jon and Alan did spent a bit of time finding a parking spot the next day as all Parisian garages are 1.95m high… They found one in the end where she fitted with a few cm spare and she was allowed to stay for 24 hours if we left the key! The garage is so small they double park every car and keep every key so they can move cars out of the way when an owner comes to collect their car. Quite a contrast to Mongolia… 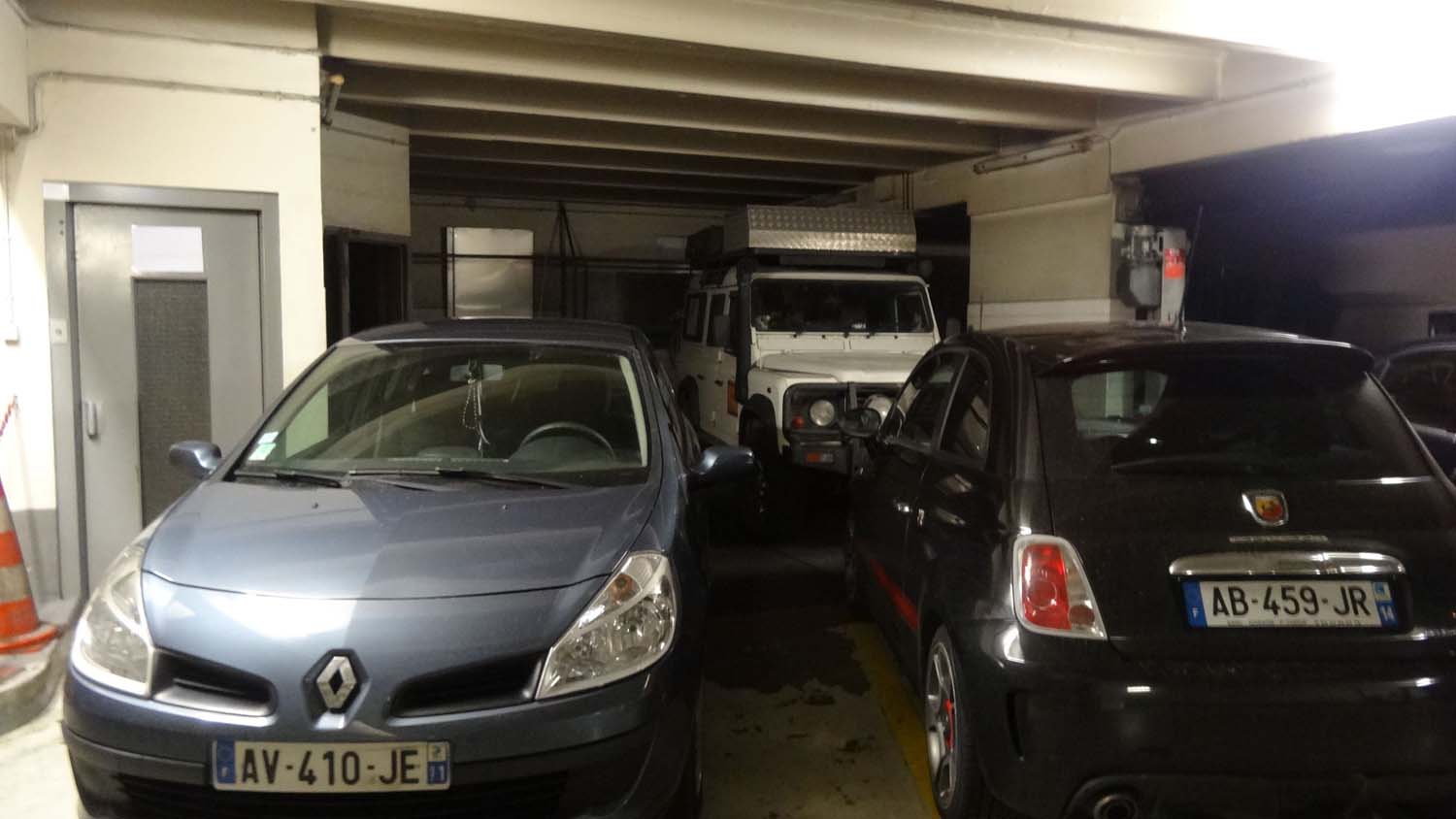 we find an underground car park in Paris where she just fits!

But first we had to get into Alan and Elaine’s building trying out our secret codes on the doors, hike up the endless flights of stairs (of course the lift wasn’t working) and then we rang the doorbell, hoping it was the right place. We received a big grin from Alan emerged in the open door and after lots and lots of hugs we sat down with a beer and the long anticipated catch up began!

The next day we had a leisurely breakfast, followed by a long walking tour of all their favourite spots in Paris, which seemed mainly to consist of bakeries and stops for drinks – no more glühwein but vin chaud now. We did manage to catch the sparkles of the Eiffel Tower (every night after dark on the hour) before heading back home via the Arc de Triomphe. 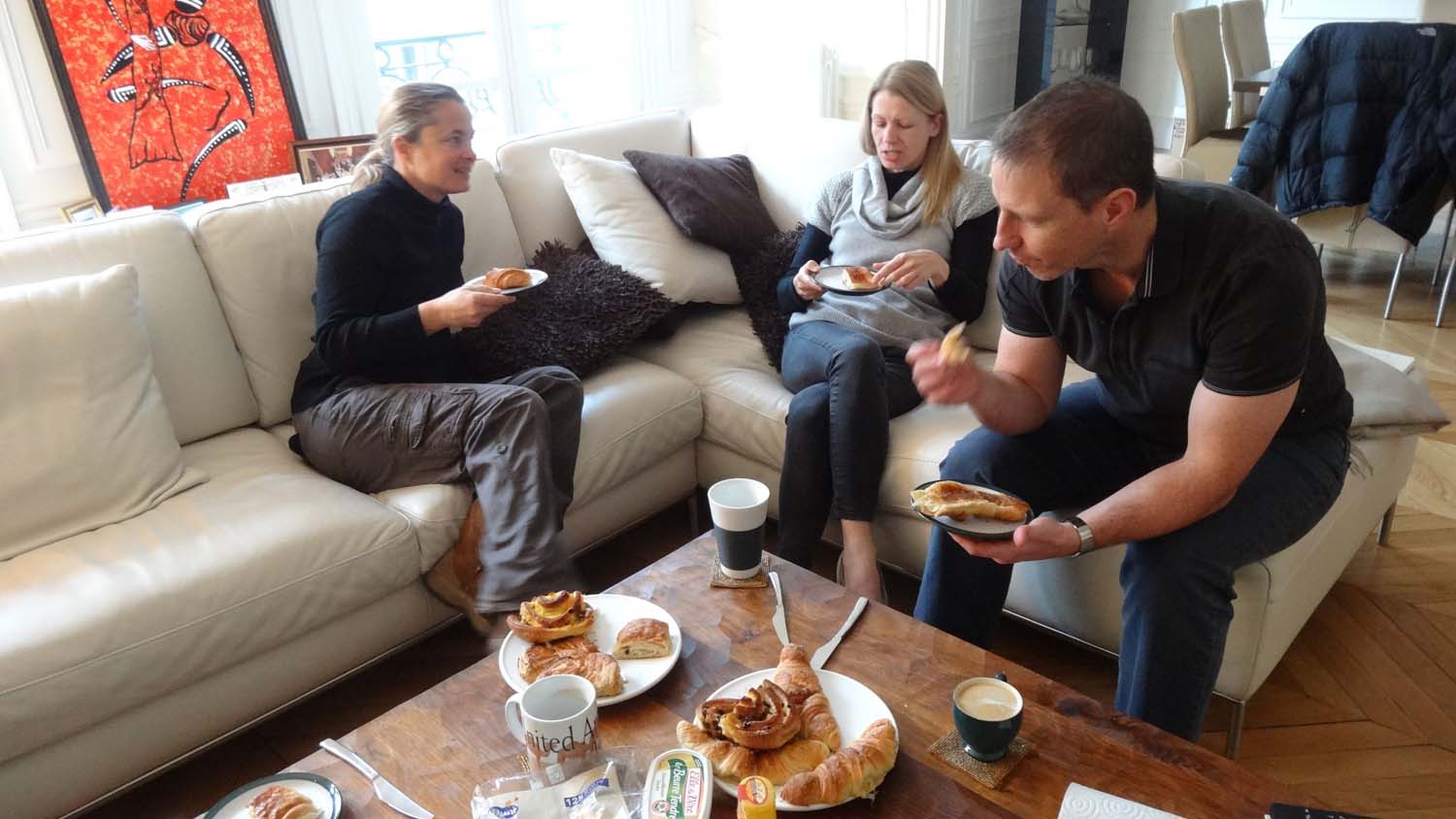 a typical French breakfast with Alan and Elaine 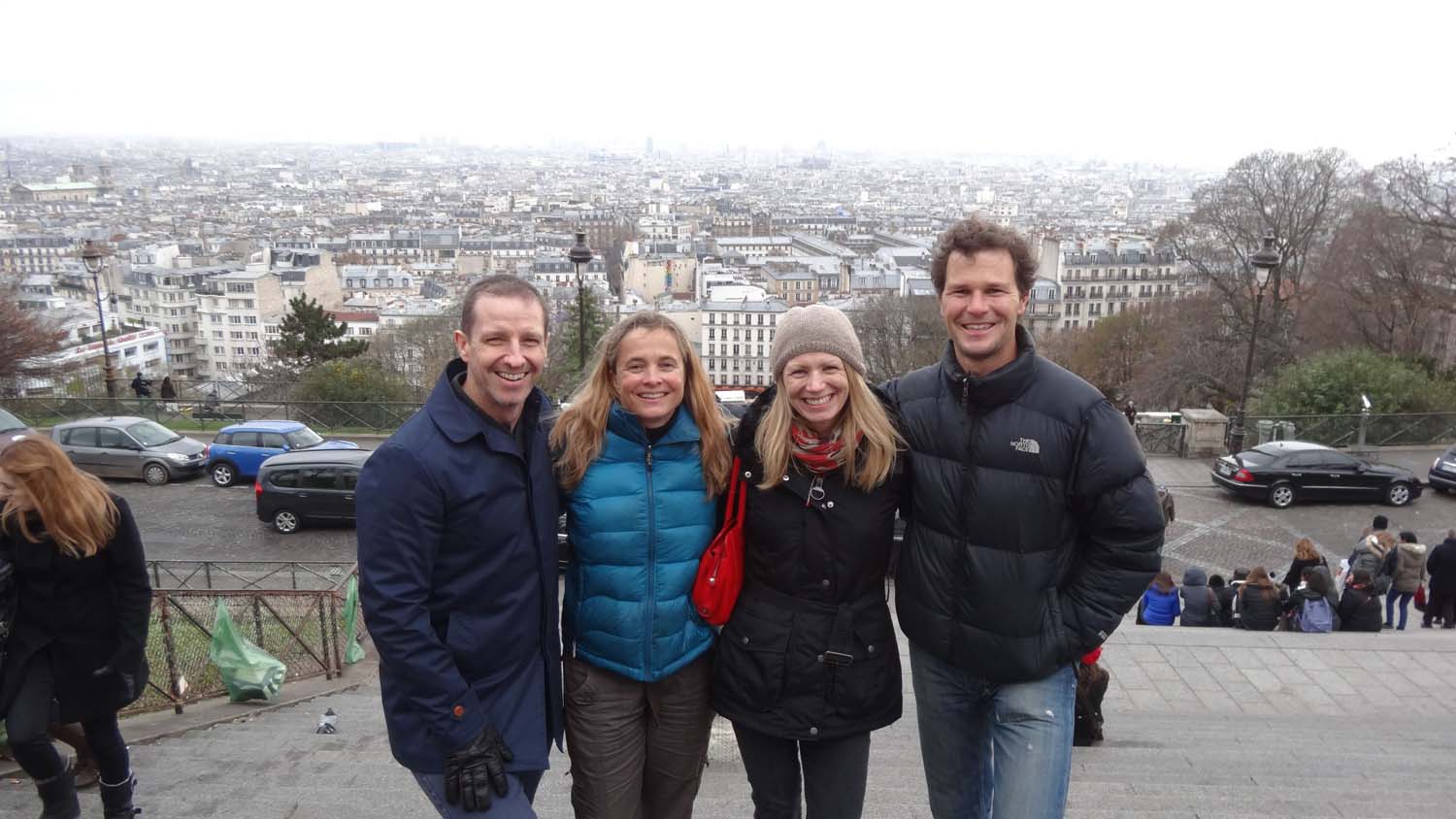 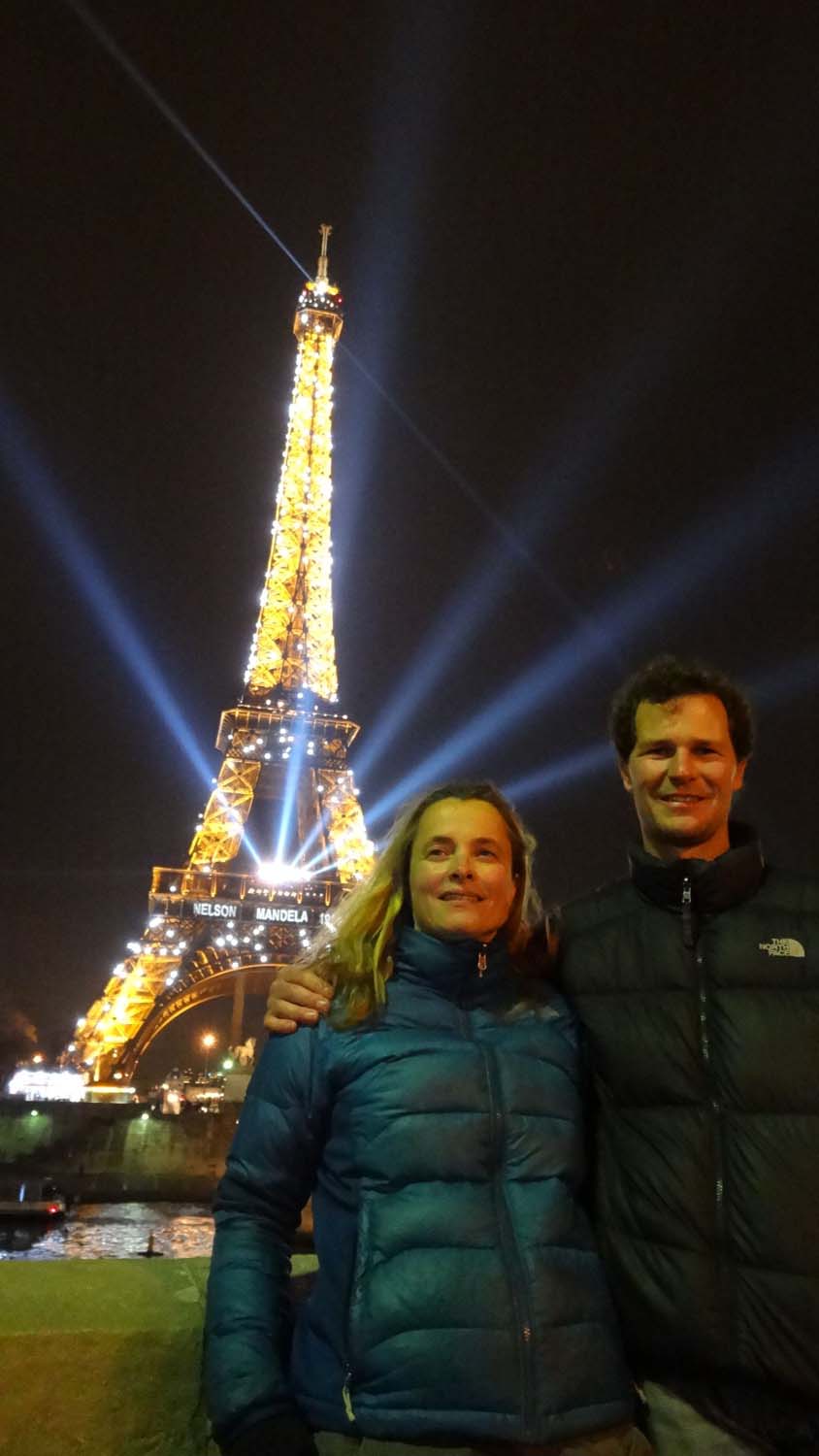 sparkles on the Eiffel Tower 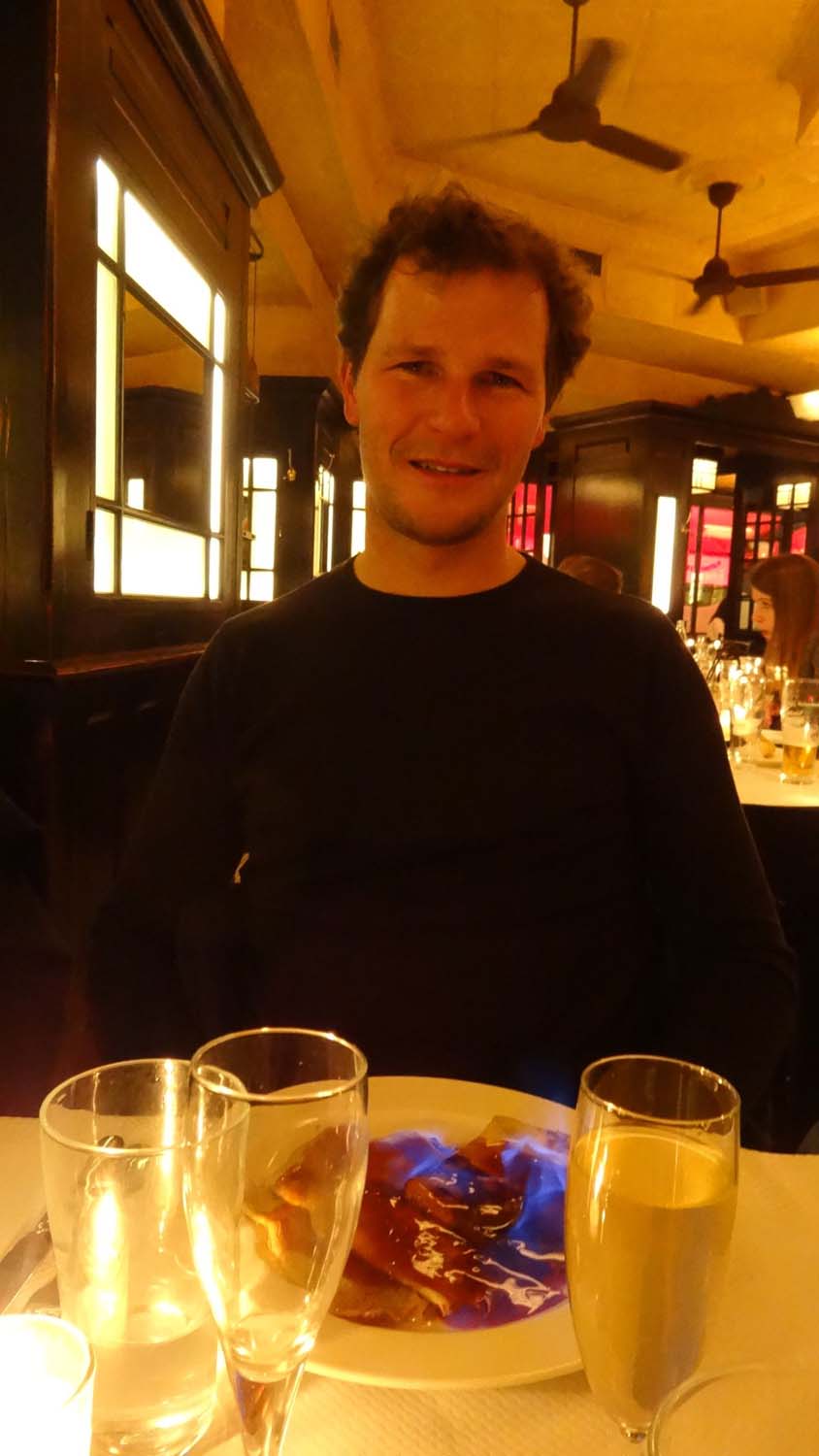 Jon is happiest when his desert is served with flaming alcohol!

Unfortunately we had to leave the next day, beating rush hour traffic by leaving early in the morning. Today we had an important deadline to make: we wanted to pick up Niels and Jens (Jude’s 2 youngest nephews) from school. And they didn’t know about our intended pick up!

Of course we got stuck in a few traffic jams and we were anxiously watching the ETA (estimated time of arrival) on our GPS to see if we would still make it. But finally after many, many kilometers of driving we were on familiar Dutch territory and it looked as if we were going to be on time.

Driving into the street where Jude’s sister Sandra and her husband Peter live with Jessie, Niels and Jens felt otherworldly. But soon Sandra and Jude’s mum and dad came running out and a few tears of joy were running down our faces. We had made it with time to spare before school was out! Peter arrived home from work minutes later and we all sat down for a wonderful lunch together. Lots of smiles around! 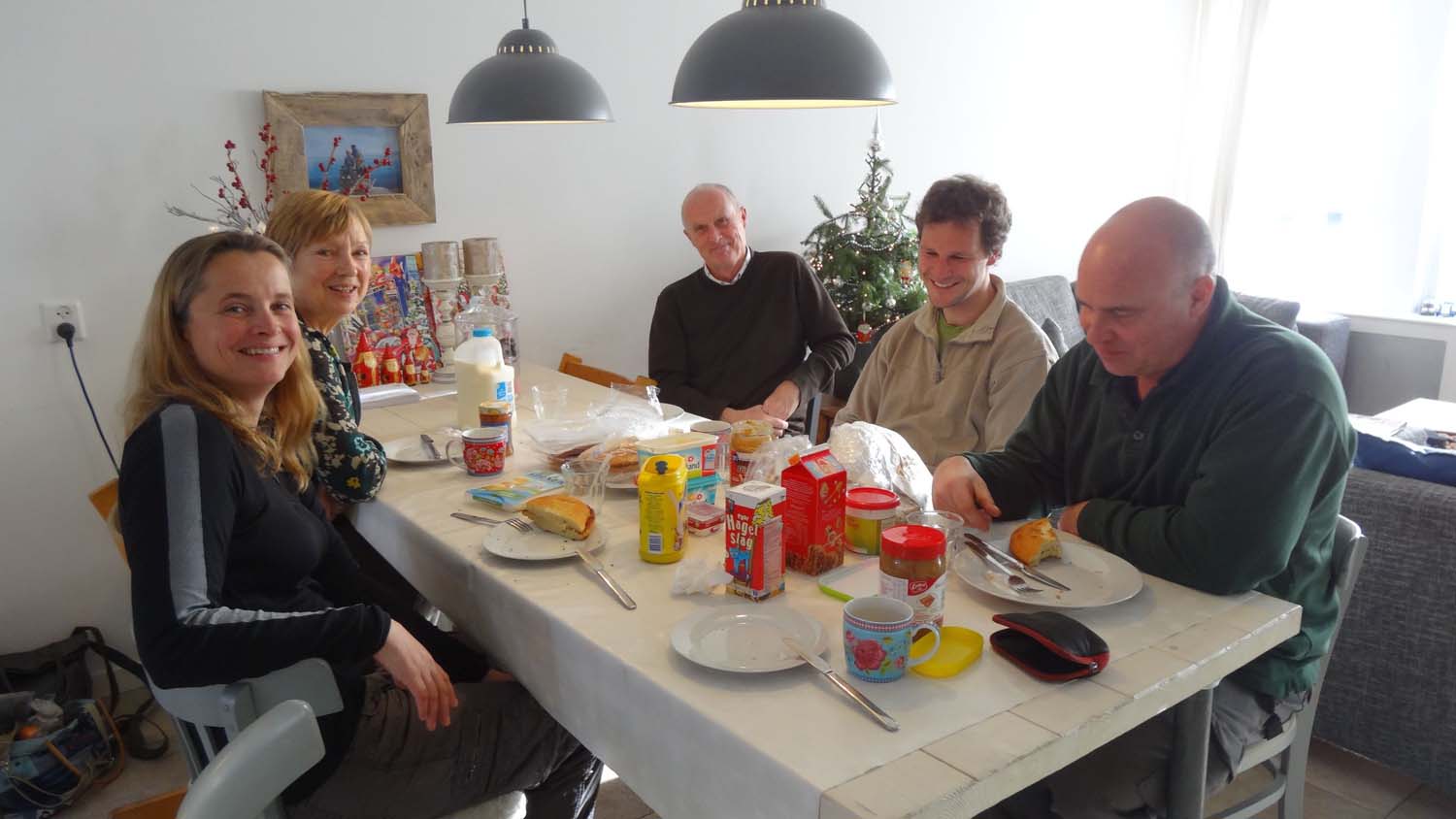 a typical Dutch lunch with Jude’s mum and dad, Sandra (her sister) and Peter (brother in law)

And then we drove off to school. First we picked up Niels. Jude spotted him and she knocked on the window to let him know we were there, he could probably see Lara from where he was sitting as we had parked right in front of the school. He came running out a little later with a big grin on his face and after big hugs it was time to pick up Jens at a different location. Niels jumped in the car with Jude, of course he went to the wrong side first, and together they drove off. Jon followed with Sandra and Peter on bikes.

Niels disappeared to alert Jens and together they emerged running across the school playground. Jens didn’t know what to do with so many people there and decided he would say hi to his mum, but then we also got our big hugs. (see ‘We made it‘ for photos of the school run)

Driving home with Niels and Jens in the car was a highlight and then we just spent hours talking and showing the car to everybody, including Jessie who had come home from school too. Oh and Jon changed the Lada brake pads back to the old worn Land Rover ones as the noise was getting unbearable on the way into Holland. 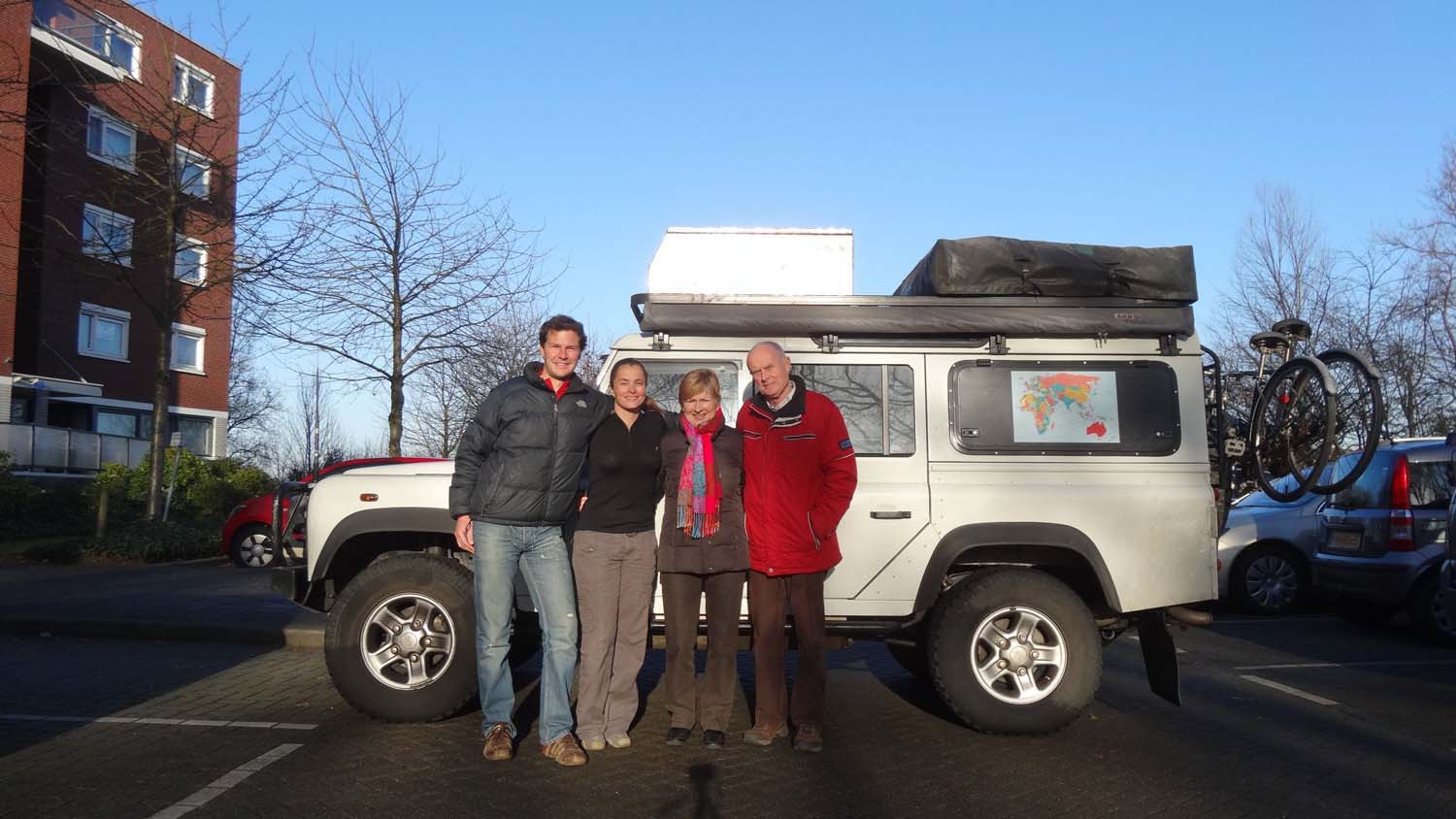 Lara in Bergen op Zoom with Jude’s mum and dad 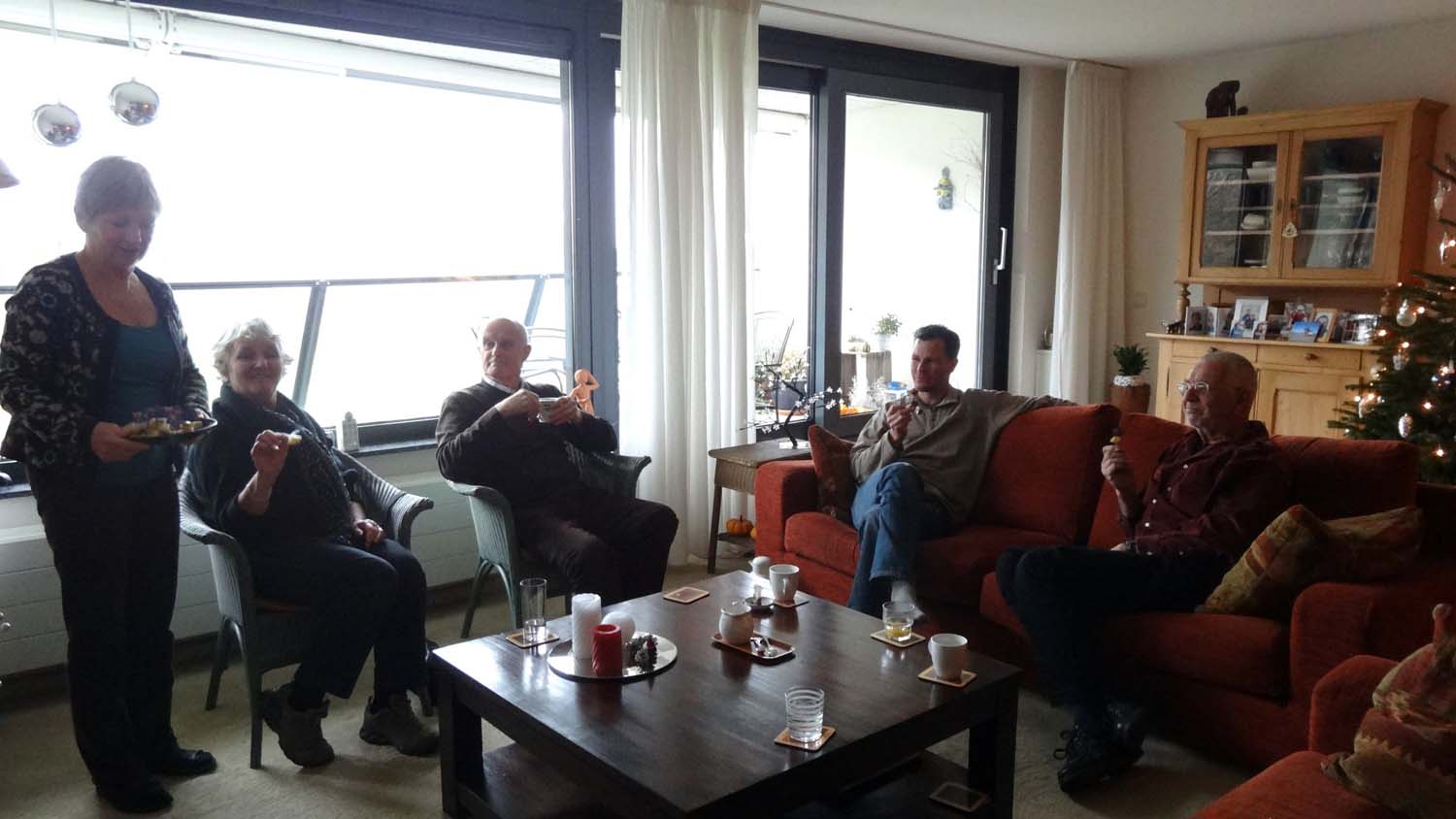 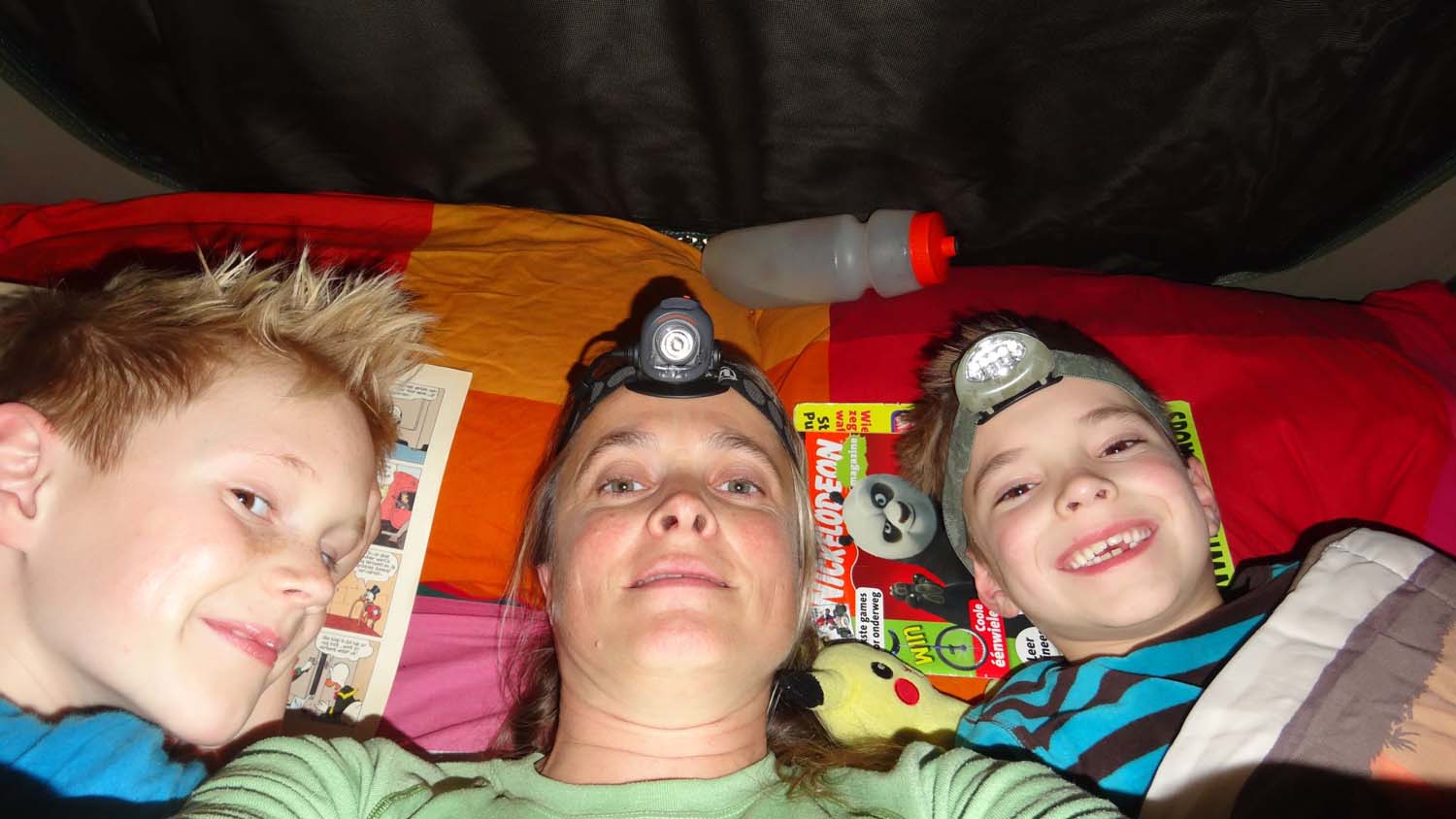 Niels and Jens join Jude for a night sleeping in Lara’s Taj Mahal. The camp site is the carpark in front of Jude’s parents’ house. 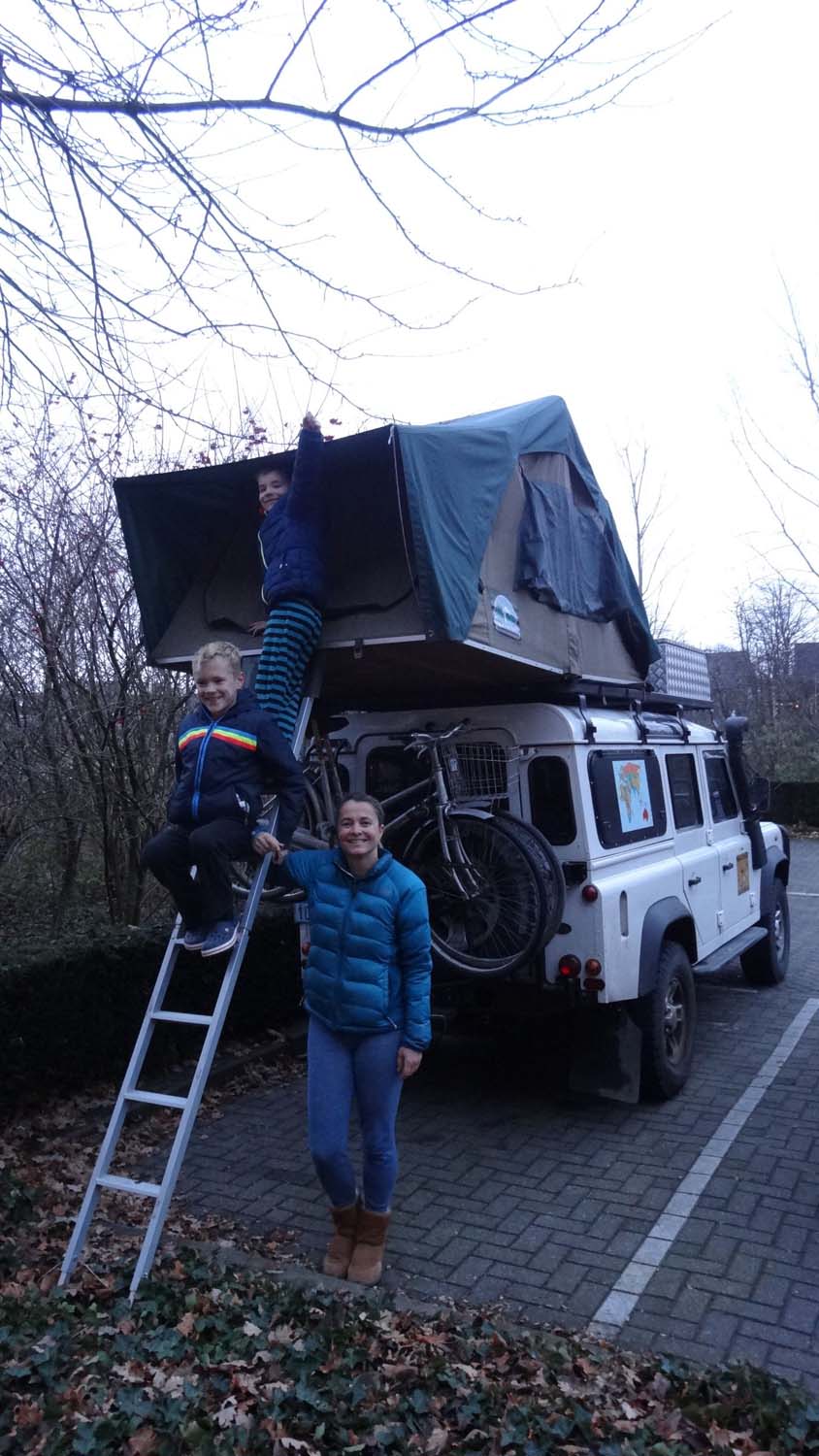 ready to have breakfast inside

That night we drove to Bergen op Zoom with Jude’s mum and dad as Niels and Jens still had to go to school the next day… We caught up with family the next day and even managed to see old friends Gert-Jan and Simone before we headed off to the ferry.

We were almost at our end point. Only one more country to add to the list for this trip… 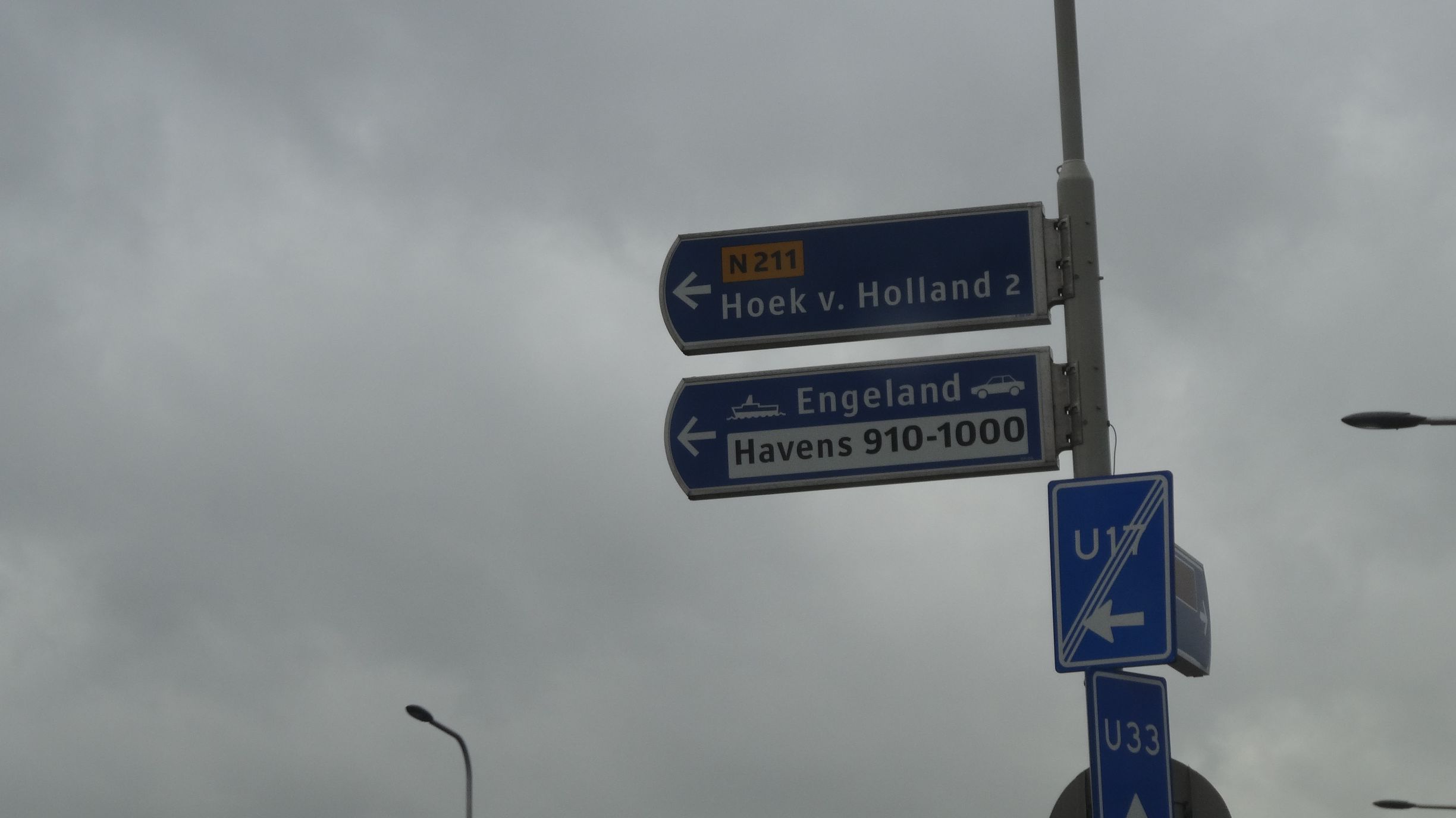 We arrived at the ferry and could drive straight on, very efficient. After parking Lara we went up to the passenger decks to find a comfy spot to spent the next hours. We found a great spot in the cinema area with a power point to charge the computer and set up shop. The weather outside was typical English so we could already get used to it…. 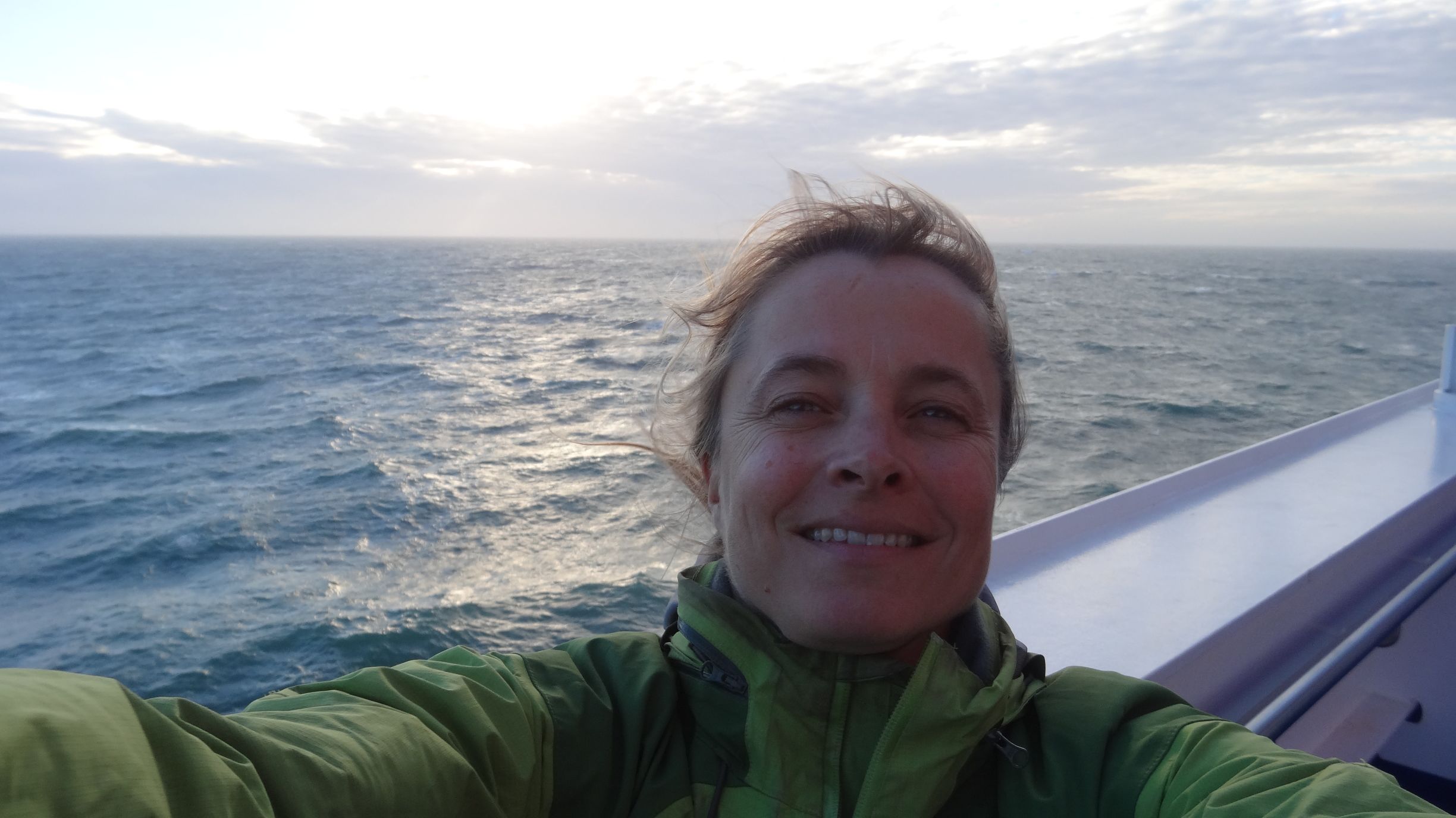 Seven long hours later we drove off the ferry and queued for the last border crossing – into the United Kingdom. And then we were off, the final kilometers to our final destination.

We arrived late at night at Claire and Russell’s place in Penshurst, south of London where of course Sophie and Olivia had already long gone to bed. We’ll have to wait until morning before we can see them… A bottle of red and stories came out until we eventually headed to bed, keen to see the girls the next day. 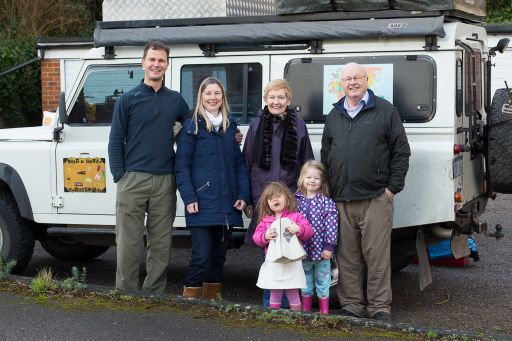 Jon and Lara with Claire (Jon’s sister), his mum and dad and the 2 nieces Sophie and Olivia

Sophie and Olivia were also very excited and happy to see their uncle and aunty again and we spent a lovely day together, trying to cram one year of adventures into one day of story telling!

The next day, the day before Christmas, it was time for Jude to say good-bye to Lara. It was rather weird leaving her at Gatwick airport to return to her family for Christmas. The ecstatic feeling of ‘Having made it’ was slightly overpowered by the depressing feeling of

But, fear not. There is more to come. We still have the answers to all your questions…

… and many, many more details and statistics shall all be revealed in our next blog! There might even be a graph or two for all the spreadsheet lovers amongst you!

And who knows, maybe we will share more adventures with you one day.

Thanks for reading, caring and commenting! We have certainly enjoyed writing our blog and hope you have enjoyed reading (some or all of) our posts too! 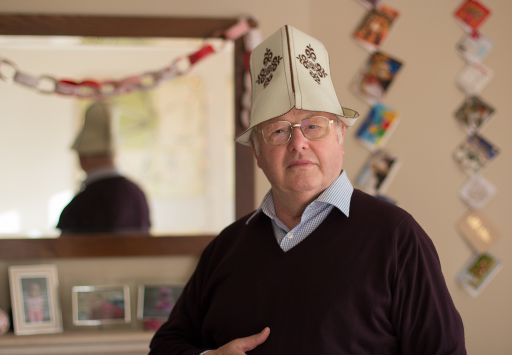 Jon’s dad with his hat from Kyrgyzstan 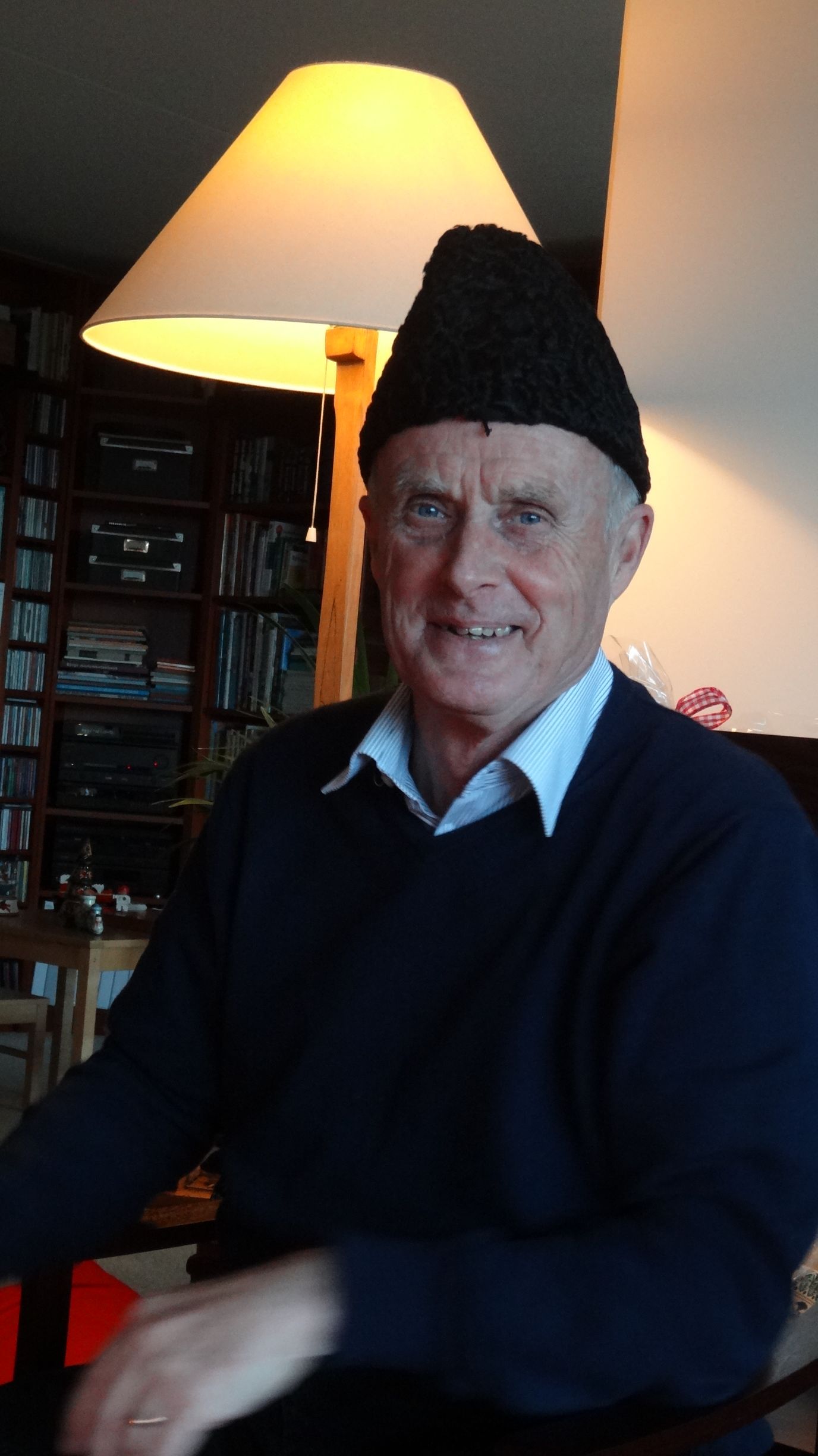 Jude’s dad with his hat from Iran 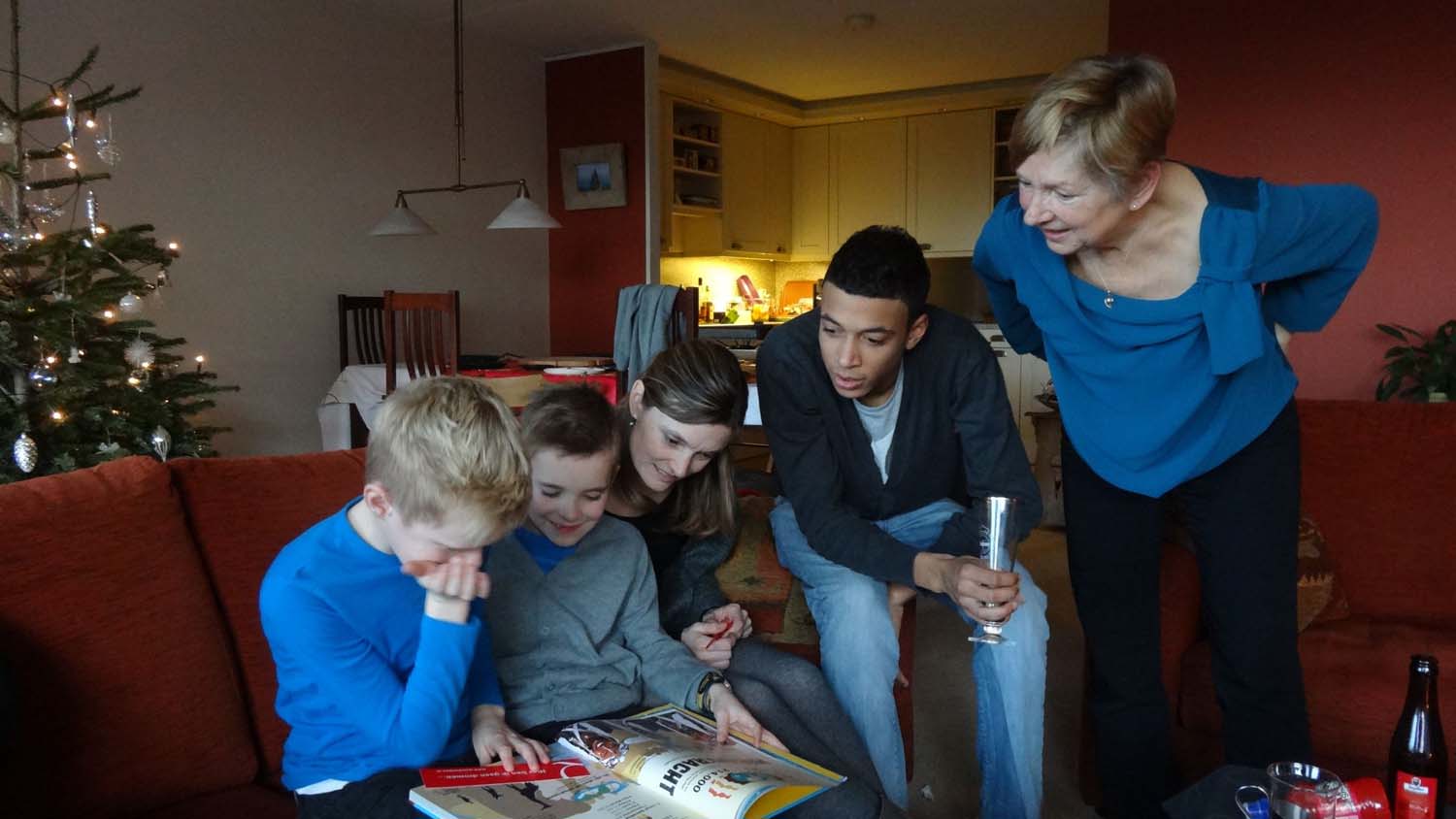 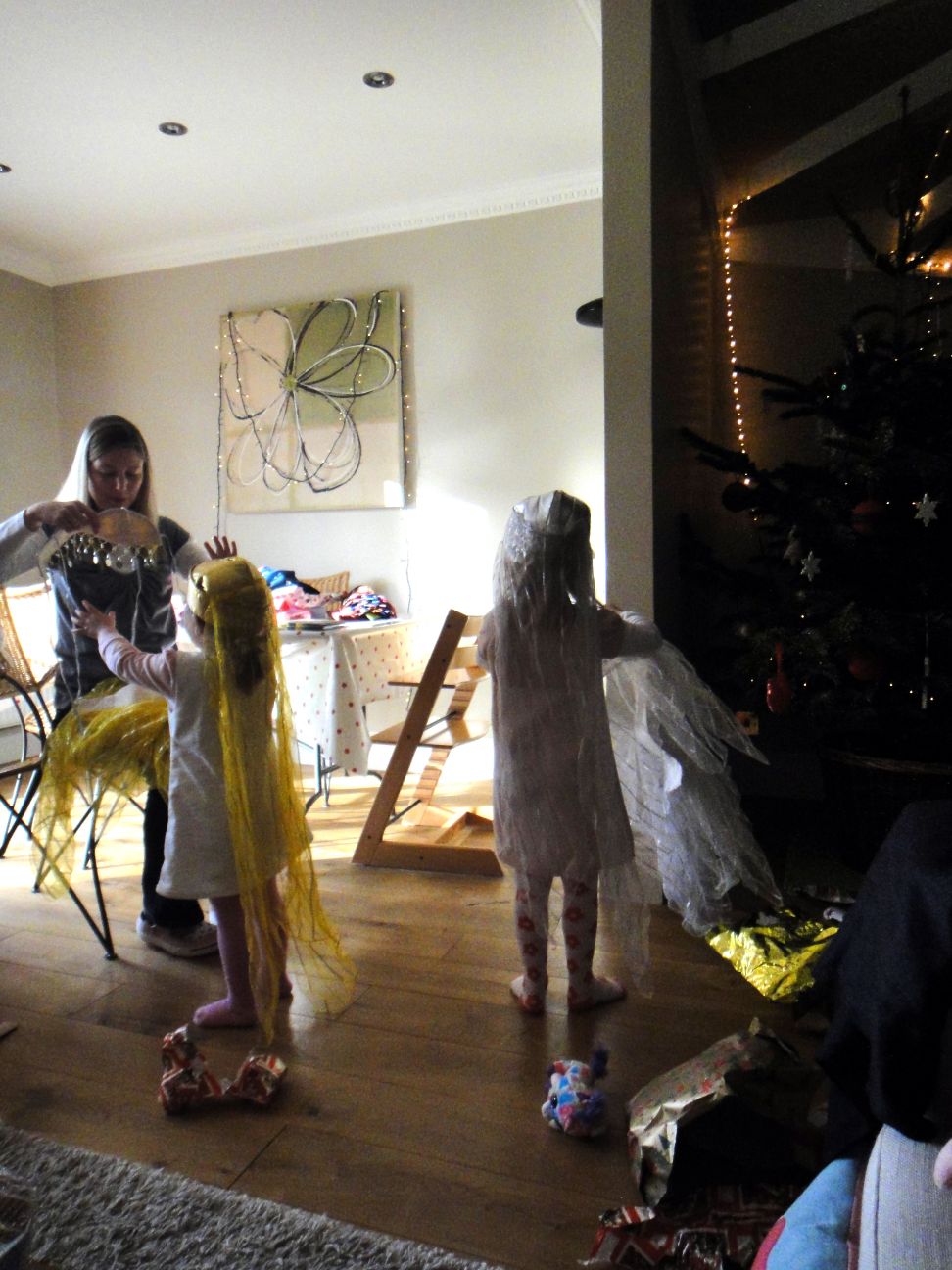 Sophie and Olivia trying on their princess outfits