Marcus, Muz and I fly to Queensland for Hells Bells. Things that come to mind when I think about that race are a leaking kayak, Marcus running fast on the hike + bike section, cheese and bubbly at the top of Mt Beerburrum and mud, lots of mud at the start… 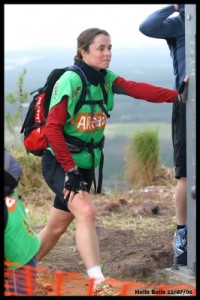 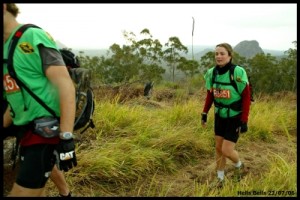 getting to the top of Mt Beerburrum 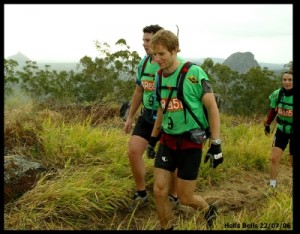 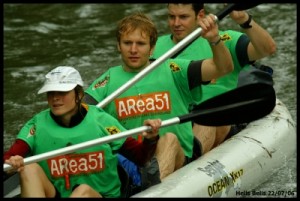 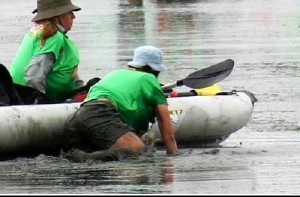 this is not us, but it was like that – trying to get out through the mud at the start…

This is another team’s race report (on half of the race I think) to give you an idea of what we did:

One of the best things about 24 hour races is that they usually start at midday. This means that you can get up at a civilized hour (like after the sky starts getting light). I was up at 6am and eating as big a breakfast as I could and boiling some chunky soup to put a vacuum flask for the race. As usual it all took longer than expected and I was at Darren’s place 15 minutes late. Race HQ was nice and close this year at Toorbul (on the mainland near Bribie Island) so it wasn’t going to take long to get there.

First thing was to drop our bikes at the transition area. This navigational task was given to Darren while Matt and I drove the cars. We drive into Race HQ and park the cars… “What about the bike transition Darren?”, “Bike transition? Is there a bike transition?” This did not bode well for the race – we’d made our first team error already. Good thing we were there with a little time to spare so we dropped the bikes off and got back to Race HQ in time for the release of the maps.

This year we had a full 2½ hours to plan the race and pack the three 55 litre containers (these containers are transported to specified transition areas (TAs) around the course) so there wasn’t the panic we had last year. Still, we managed to waste 45 minutes trying to figure out how the 6 A4 size maps fitted together. For some reason I was expecting a lot of overlap but it turned out they just butted up against each other – doh! We highlight our proposed course, mark the locations where the containers will be, pack the containers with way more stuff than we need, contact the maps, etc. etc.

All too soon we’re assembled on the beach ready to start with our inflatable kayaks listening to the race briefing. Craig (the race director) announces a few changes to the clues for the controls. I commit them to my 60 second memory. The tide is out. If you know Morton Bay you’d know that this means the water is usually hundreds of meters out and in its place is mud flat. This is no exception. To the north (the direction we wanted to go) is hundreds of meters of mud. To the east there is only about 50. Darren suggested we could gain some time by dragging the kayak north. Matt and I weren’t so sure. I decide to test the mud and I immediately sink half way up my shins. East it is! And man that mud smells.

The start hooter sounds and Darren (our control card specialist) runs down the shore line to pick up our control card. Matt and I start dragging the kayak towards the water. The further we go the deeper the mud gets. With still 10 metres to go it’s up to the tops of our legs and as smelly as ever. It must have been a funny sight from shore – 50 teams wallowing about desperately trying to get their kayaks to water. I feel sorry for people with short legs. Some competitors find it easier to slide along on their stomachs so they don’t sink.

Soon the kayak is floating in enough water for us to hop in and smear everything with mud. We’re about 20th and the first kayaks are already well into the distance. We paddle round to the mouth of the river and up it. Naturally the tide is going out so we have a nice current against us. The channel zig zags around sand banks and mud flats. The temptation is to take a short cut and portage across a sand bank, so of course, that’s what we do. As we haul the kayak it gets heavier and heavier. When we get to the other side we’re a little behind the kayaks we left – we didn’t gain any distance and we spent a lot more energy – won’t do that again. We resign ourselves to paddling the rest of the way trying to ride the stern wave of any kayak that passes us and avoiding the occasional pirouette of a kayak whose helmsman has lost concentration.

Finally we arrive at the TA after more than 2 hours and drag the boat up the slippery bank. We find our 55L container and start eating, changing socks, refilling water bottles, etc. I find that I’ve packed my spare bike lamp battery in the wrong box dammit! So I decide to leave it there and risk running out rather than lug the heavy thing with me. Matt shares his rice and tuna meal – it tastes fantastic! Once again proving the fact that every one else’s food always tastes better than your own.

Getting onto the bike felt good after hours in the kayak. The bikes are our strongest discipline. After a length of bitumen we head off into pine plantation to see how accurate the map is. Turns out it is pretty good. Most of the tracks are marked on the map. We pick up the controls without a hitch and arrive at the next TA. We swap our bike shoes for runners for a short trek up Mt Beerburrum. It is short but steep – 280m vertical. Darren is feeling good and full of energy (as he usually does in the first 10 hours) so he is running ahead trying to coax Matt and I to go faster. We resist and set a steadier pace so we can save some energy for later. Matt’s finding it hard going because of all that hill climb training he didn’t do before the race. On the way we pass teams heading back down – “There’s cheese and Champaign at the top!” they say. “Yeah, ha ha ha, very funny” I think. Funny they all said the same joke though. I’m looking forward to the compulsory 10 min stop so that I could enjoy the view and have a little rest. When we get there guess what?!? Complimentary cheese and Champaign! The race organisers had laid a table with cups of bubbly and cheese and crackers. I grab some of the food but leave the drink – I don’t want any alcohol in my system! What? It’s Maison? Alright! I drink the sparkling grape juice all too quickly. Now what do we do for the next 9 minutes? It would have been beautiful if the sun was out – but it wasn’t. It’s overcast with a cold breeze. I change into my thermal. At last it’s time to go and we carefully run down the steep pathway, back onto the bikes.

The next few controls pass easily and we reach the next TA. Now it’s time for the ride and tie – a mean leg where the team is only allowed two bikes to get to the next TA. And NO dinking! So one poor team member gets to run their lungs out while the other two have a leisurely ride. Darren and I share the running to save Matt’s legs for later. We leap frog – I ride 100m in front of Darren, drop the bike and start running, Darren picks up the bike and rides 100m in front of me, drops the bike, etc. This works well for us. One of the controls is located 200m down a side track. We head down and find Craig waiting to catch out any teams that are tempted to break the 100m rule by allowing their runner to continue while a bike does the side trip to the control. We think he might catch a team or two but he doesn’t – all teams stuck together – yay! We reach the next TA where our container full of goodies is waiting for us. I hoe into one of my baked potatoes stuffed with a mixture of fried onion, capsicum, peas, cheese and mashed potato – yummo (not as yummy as Matt’s rice though). We eat as much as we can while we refill our water bottles, etc. I scald my mouth trying to down Darren’s peppermint tea which is still too hot to drink – refreshing though.

Now we’re on the longest and most challenging trek. I’ve been looking forward to it because it give’s us a chance to gain some time by playing our best card – navigation. There are two controls in the bush both in creek beds which is usually more challenging and it’s almost dark so hopefully other teams will waste time looking for them. We stick to the dirt road until it’s time to leave the trail and there’s already an elephant track forming, so we follow it into the creek. 40m down the creek and we pick up the control no problem. But damn! There’s a team approaching and we’re giving away the location of the control! The women’s team catches up to us and nabs the control with surprising speed. We head off up the ridge at a steady pace to try and loose them. We gain some time on them and when we reach the road we switch our headlamps off so we don’t give anything away. There’s no moon so it’s very dark. I start to get a little nervous as we continue because we can’t count side roads to keep track of where we are but Darren insists we keep our lights off. Darren asks “What’s coming up next Smiffy?”, “I don’t know – I can’t read the map!” The women’s team catches up and passes us at a decent trot.

Darren wants to run too but Matt and I rein him back. At least we can turn our headlamps on now and the women’s team gives away the next couple of turns before they disappear. The next two controls are at track junctions so are easy to find. Then next two are good ones. The first was tricky because of the number of creeks the 4wd trail crosses and a number of unmarked tracks coming in from the side. Fortunately I was able to track our progress on the map correctly and find the correct creek and we head down a small ridge that leads us directly to the control. Darren walks straight under it without seeing it. Unfortunately a male team behind us follows and grabs it just as easily. Then we head down the creek for a 1km shortcut to the next control. Shortly we find at least 3 other teams searching for the control we just found. He he he – it was a flat, not well defined creek bed and densely wooded – we knew they could be in there for hours. We continue and soon we’re on our own again, up a steep ridge to the last control and back to the TA where we discover we’re now coming sixth! Alright! Eat our dust!