Half a century run

Half a century is a long time.

Half a century is how long Jude has been running around this planet.

In anticipation of the milestone birthday, Jude came up with a plan to celebrate and commemorate.

She wanted to run 50km on her 50th birthday.

As it is getting pretty warm here in Queensland in the middle of the day during spring, we set out early. Just after 6am we were on the trail. Jude had worked out that the distance from Esk to Coominya on the Brisbane Valley Rail Trail is 24.5km. It’s the trail we run pretty much every day with our two lovely companions Spike and Ruby, but we only get to see a part of it as we turn around to head back the same way normally.

The Brisbane Valley Rail Trail is a multi-purpose trail that runs from Wulkuraka to Yarraman and uses the route of the old railway line that was built here between 1884 and 1913. It’s the longest rail trail in Australia with 161km from end to end. It is very scenic on the section between Esk and Coominya and the trail here cuts through quite a few small hills, crosses creeks and winds its way through sections of forest and fields. It only intersects with one major road along the 24.5km so you feel like you are miles away from everybody.

Where it crosses major creeks you can find the remnants of the old railway bridges with the tracks still on them. They are no longer in use and we had to trot down one side, and up the other on the 4 or 5 bridge locations along our way. 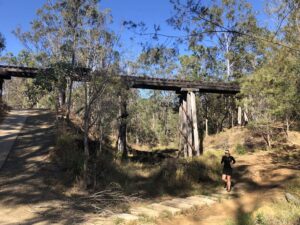 Jude at the bottom of one of the old railway bridges, no longer in use

We had always talked about running all the way to Coominya one day, and this was our chance!

The dogs didn’t come on this run as it might have been a bit too long for them. So early in the morning, when it was still quite cool, we set off, just the two of us. 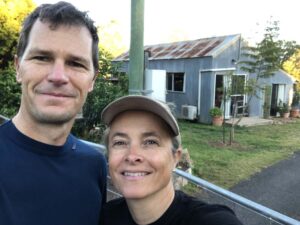 Jon and Jude at the start in Esk

We enjoyed the birds, the wallabies still hopping around in the fields next to the track and after 7.5km we also enjoyed the excitement of a new section (for us) of the track. 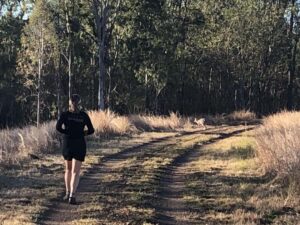 Jude near the start, wallaby crossing the track. We often see lots of wallabies here in the morning 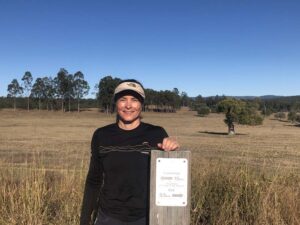 Jude nearly 10km into the run 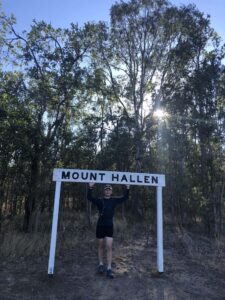 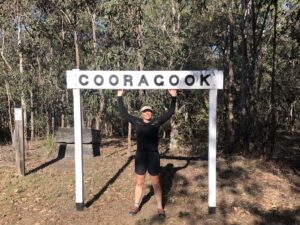 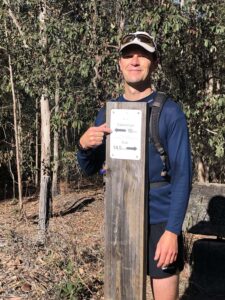 Only 10km to go to Coominya 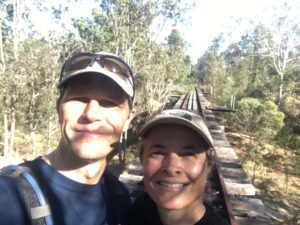 part of the old track

Arriving in Coominya we were met with Roland and Sue who had brought their dogs (Spike and Ruby) to join us for a little picnic in the park before we would run back. We had to extend the run a little bit to make up for the fact the trail wasn’t exactly 25km, so we just continued through town and headed back when we reached the turn around point to make it 25km. 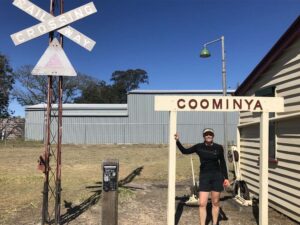 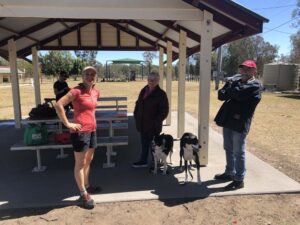 morning tea with Roland and Sue in Coominya, and of course Ruby and Spike are there too

The biggest disappointment of the day was the café. Jon had found a little café called the Blue Tea Pot, but unfortunately it is only still there in name. It is now no longer a café but just a petrol station selling deep-fried junk food and couldn’t even make us a cuppa (tea or coffee). We bought some drinks from the fridge and headed out to the park next to the Brisbane Valley Rail Trail and found a shaded picnic table that was perfect.

After about an hour we swapped our long-sleeve tops from the morning for a short-sleeve top for the run back. It was definitely getting hot now. We set off for our run back to Esk (which took a little longer than the run to Coominya), again extending the run a bit before turning into the driveway at home to make sure we got to the 25km mark.

The knees and hips were protesting a bit after our run, but we were very satisfied and happy we had managed to complete the challenge. It’s certainly a birthday Jude will remember.