Greece without the sunshine, beaches or islands

It was raining in Greece. And when it wasn’t raining fog descended on us when driving through the beautiful mountain roads, making it very hard to enjoy the views.

Our race back to the Netherlands and the UK had started the moment we crossed from Asia into Europe at lightning speed (you can read about our Turkey into Greece border crossing on the Europe page under ‘Countries’). We were due at our family homes for Christmas, so not much time left to cover the remaining kilometers. But we still wanted to try to see some of the countries’ highlights en route. No more detours though, just more or less a straight line to Western Europe.

Greece was eerily quiet. The brand new toll roads were simply empty. Even when passing through Thessaloniki, the second largest city in Greece, there was hardly a soul on the roads. Other signs of the recession were everywhere you looked: restaurants were empty and building projects half finished. 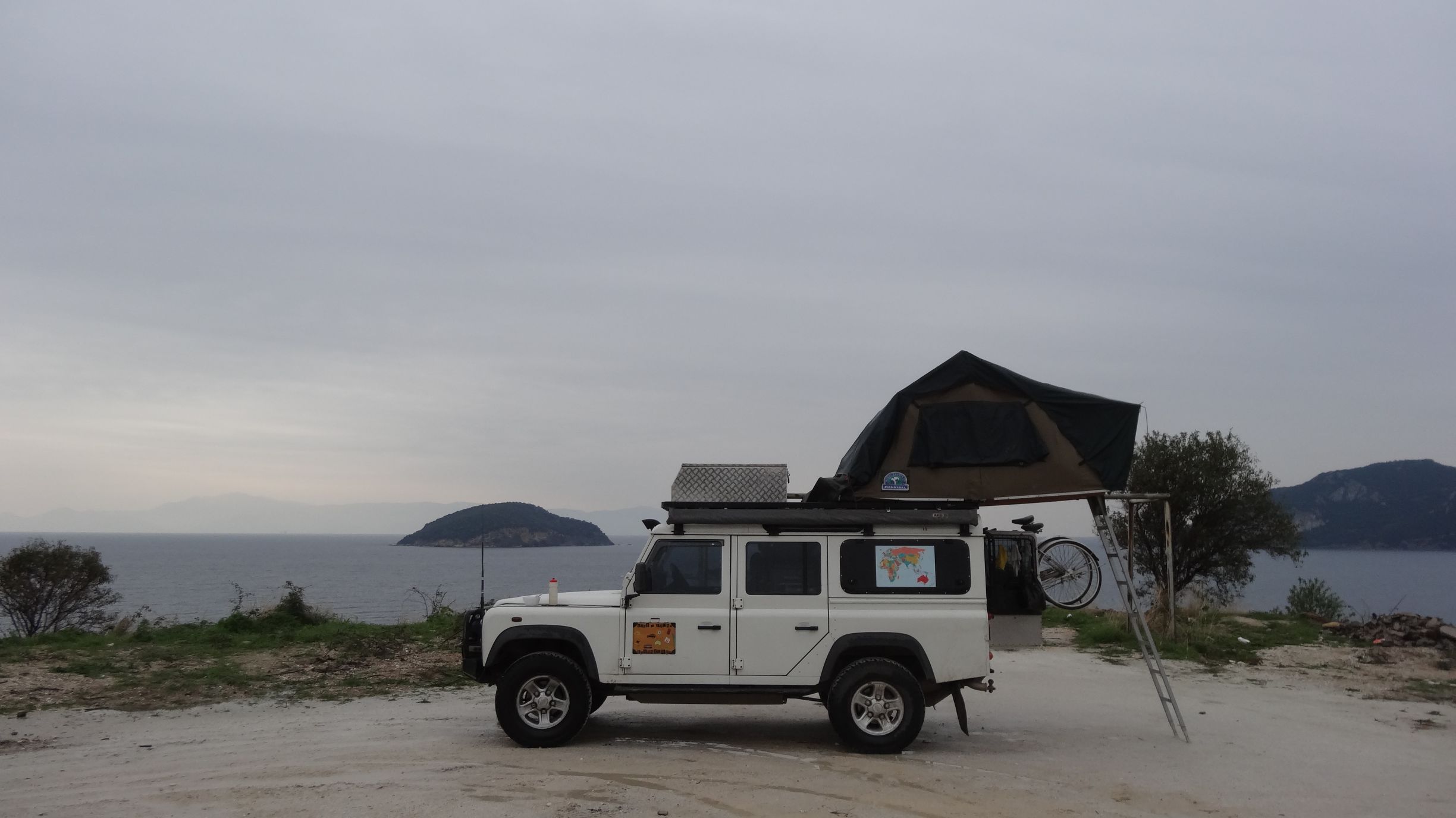 thanks to the recession we can camp on this unfinished building site, a lucky find in the dark on this heavily built-up part of the Greek coast

In Greece we decided we wanted to stop at just 2 places: Meteora and Zagori. At Meteora we wanted to see the famous monasteries and nunneries built on top of rocky outcrops and in Zagori we wanted to have a wander through the world’s deepest gorge according to the Guinness Book of Records.

Meteora was covered in low hanging clouds when we arrived late in the afternoon, and heavy rain and cold temperatures added to the doom and gloom. We found a spot to camp, overlooking a monastery we could occasionally see through the mist. After reading our books for a little while we decided to head into town for a meal – it was not the weather for cooking. 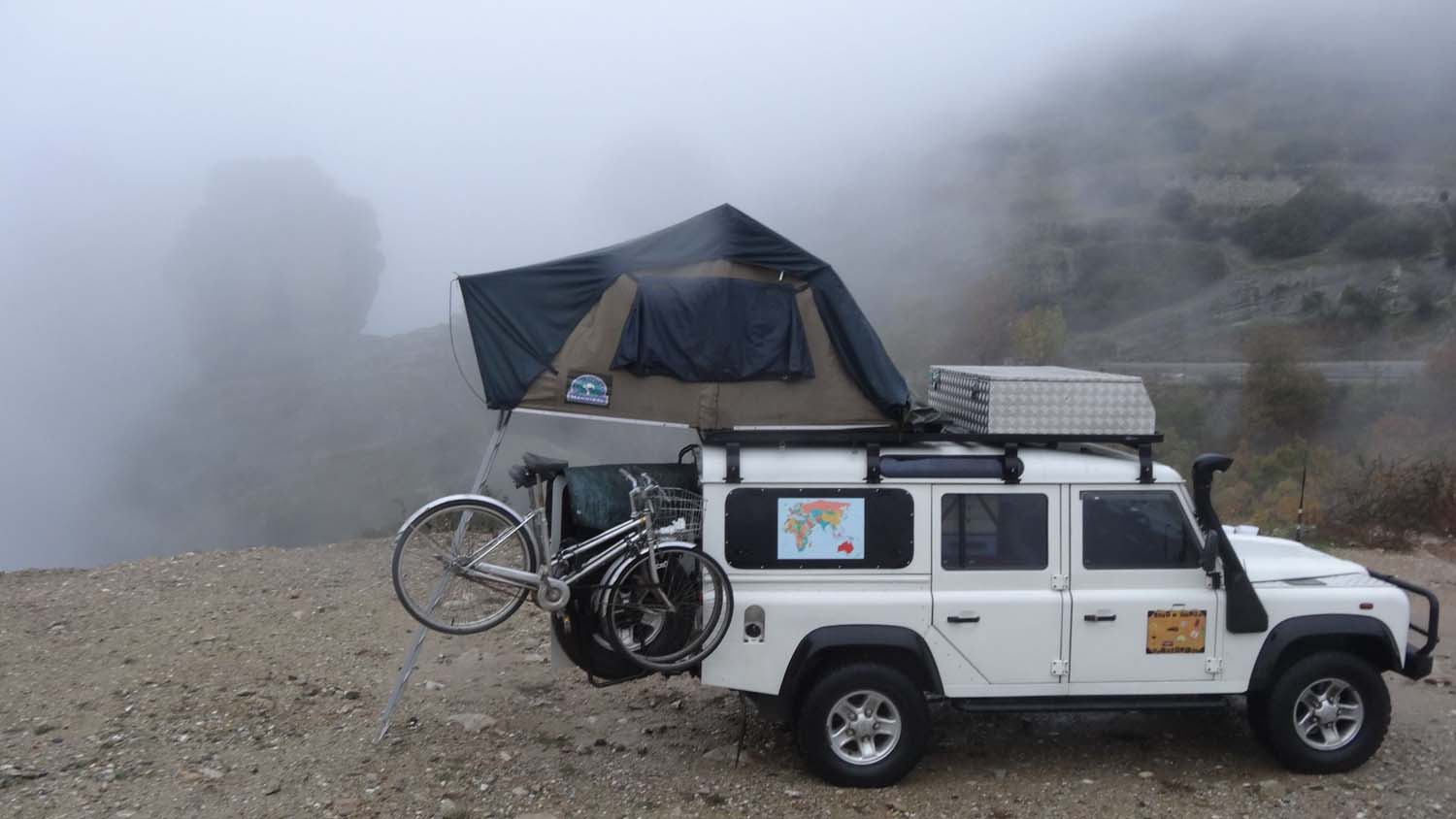 That proved too difficult as most restaurants were closed, some places only served drinks, others only had meat on the menu. We even found the vegetarian owner of one of the restaurants who told us he always struggled to find food as a vegetarian in Greece…! He offered a salad for Jude, not what we had in mind on a cold and wintery evening.

Back at our campsite the weather hadn’t improved and we pitched the tent in the rain, settling down in our Taj Mahal with a good book and the laptop for a movie. As long as you don’t have to go out for a toilet stop it is quite cozy up there, even in the rain. 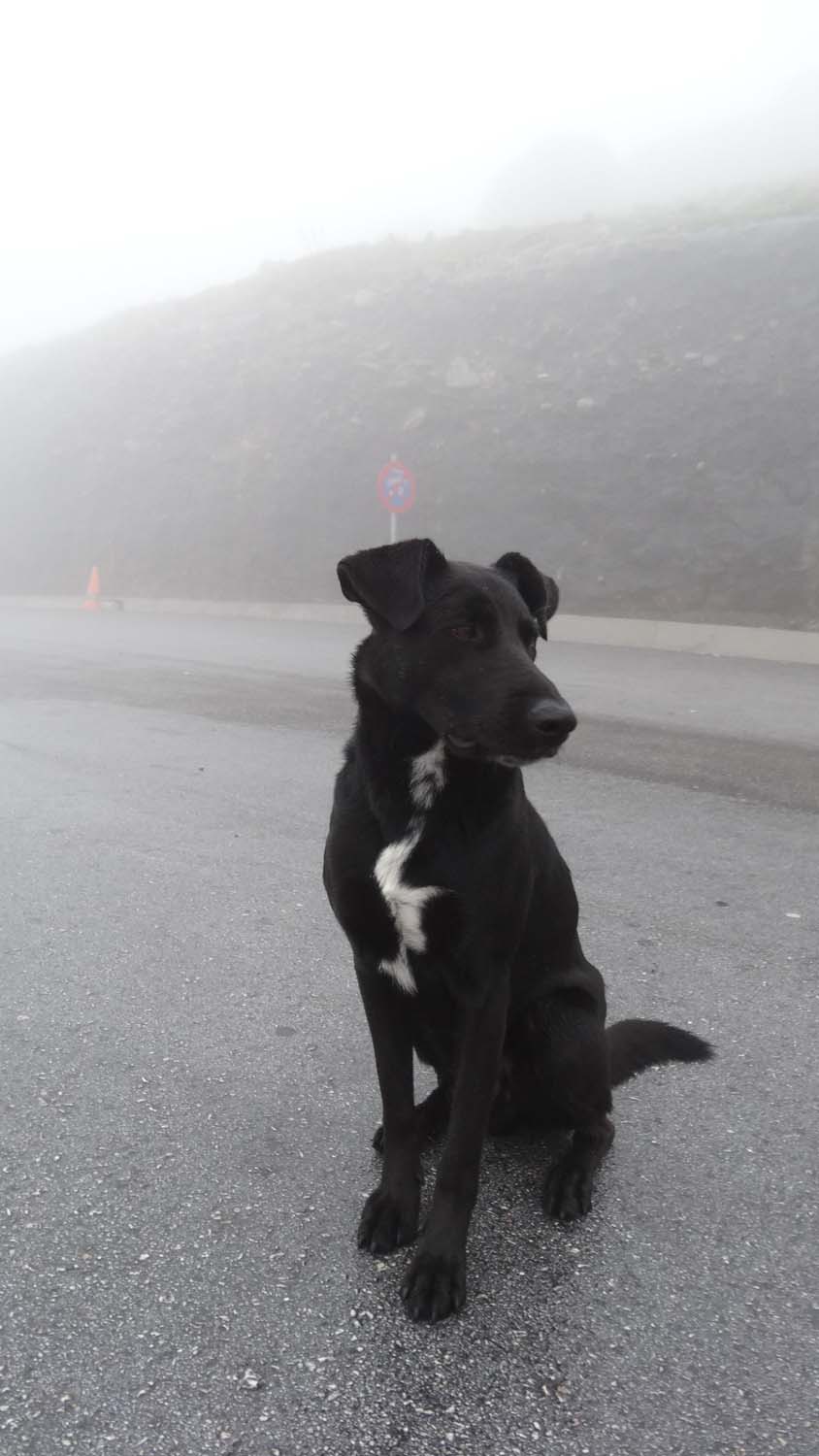 again we have a cute 4-legged friend visit us

Unfortunately we now have to protect our mattress and duvet with plastic sheets and tarps when we drive in the rain, as the waterproof cover of our roof top tent has completely warn and leaks like a sieve. Five years in the harsh Australian sun plus a year on the road had taken its toll. Even with all the plastic and tarps protecting it, we get an occasional wet patch inside, making traveling in the wet a bit more laborious than it should be. Luckily the actual tent is still perfectly waterproof. But it’s definitely time for a new cover when we get back (so we don’t have this problem on our next trip!).

The next morning it did stop raining, but the clouds stayed low, so we visited just one monastery and one nunnery without getting the full impression of their stunning settings. Dating from the 12th and 13th centuries, groups of monks built a series of monasteries perched on rock columns, accessible only by rope ladders, which kept them safe over the next 800 years from political instability, Turkish invasions and even the Germans during WW1. The collections of artwork and literature they still house is incredible. 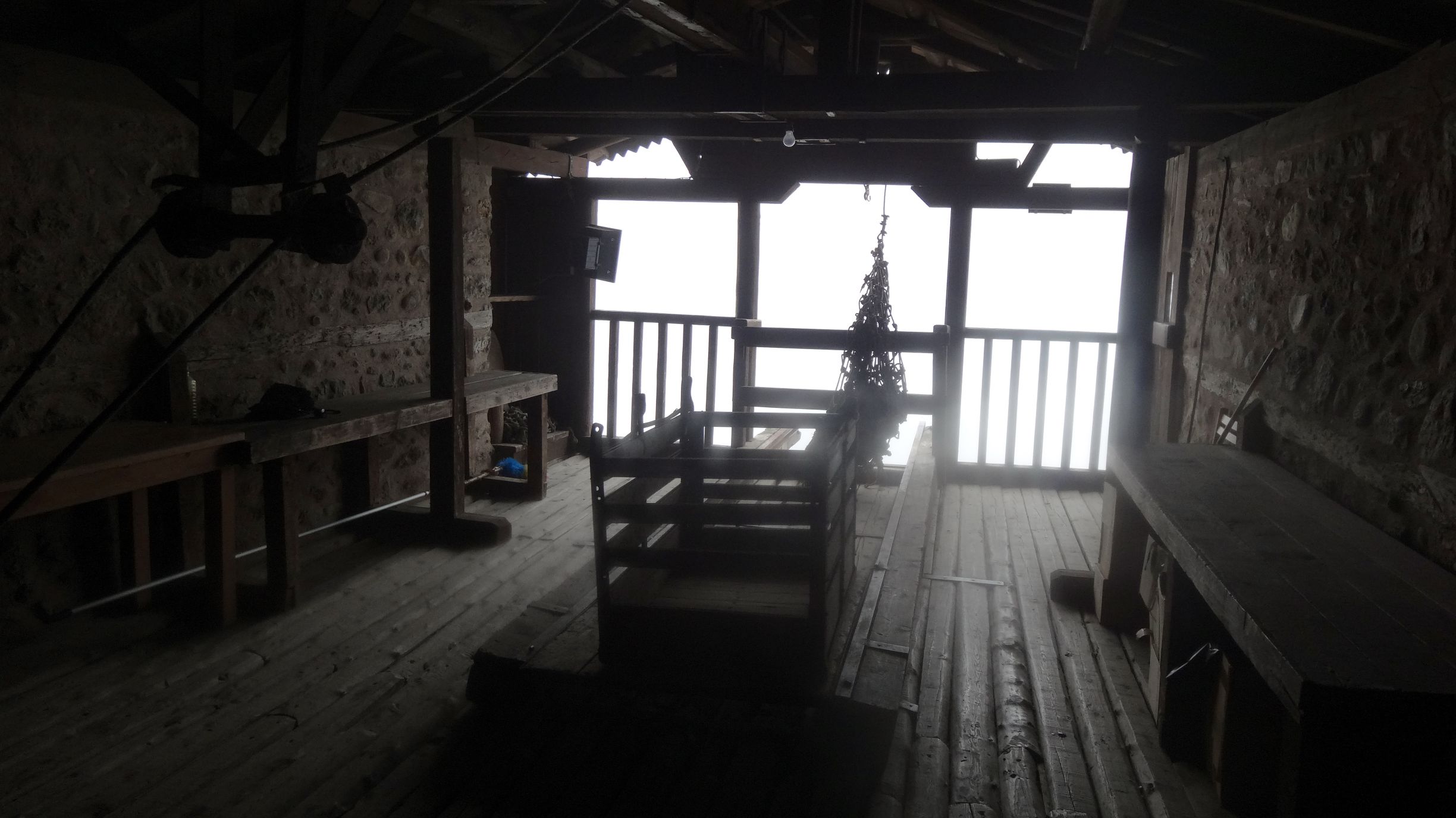 this used to be the only way into this monastery, via a rope ladder or hoisted up in a hessian bag 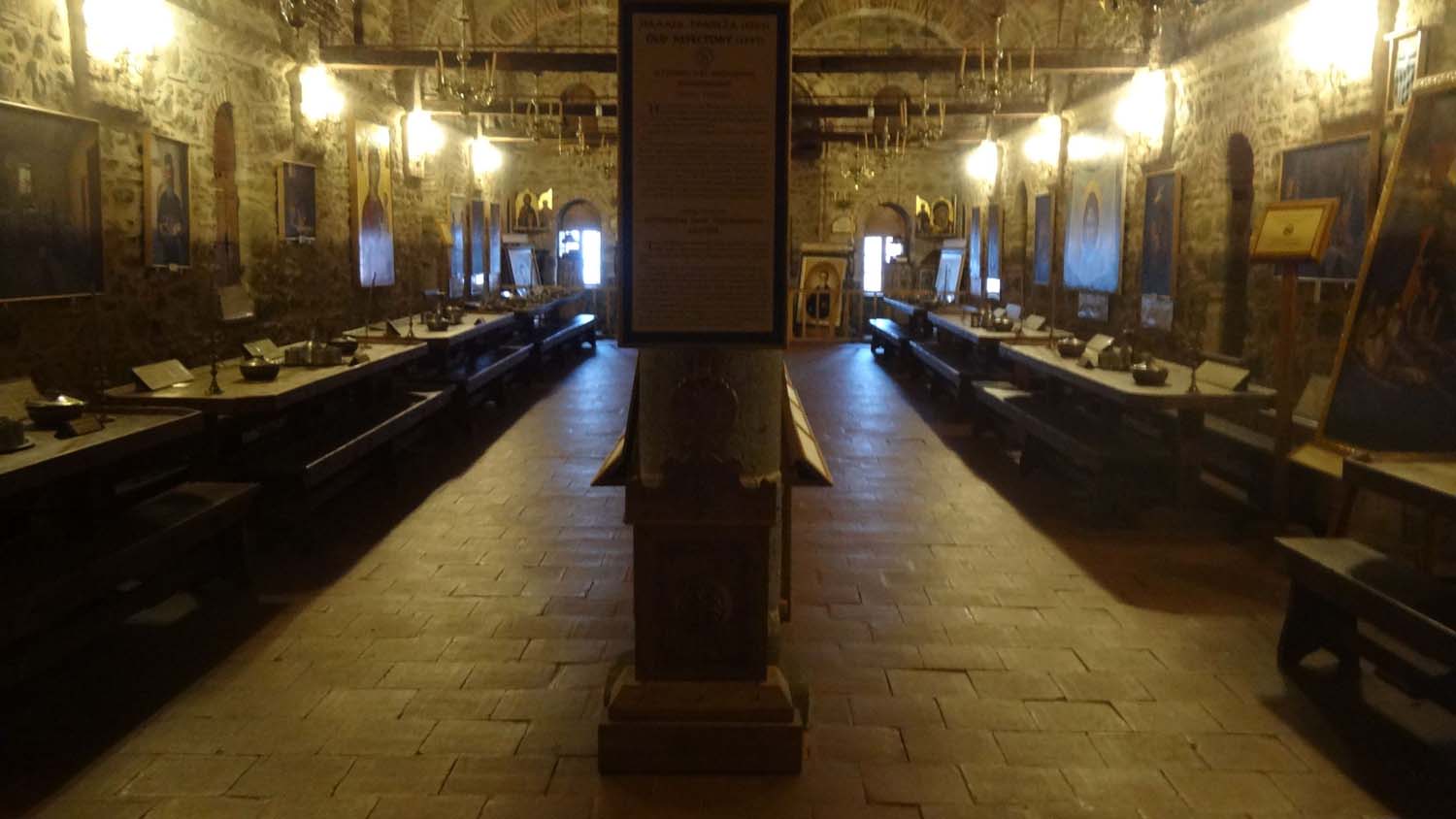 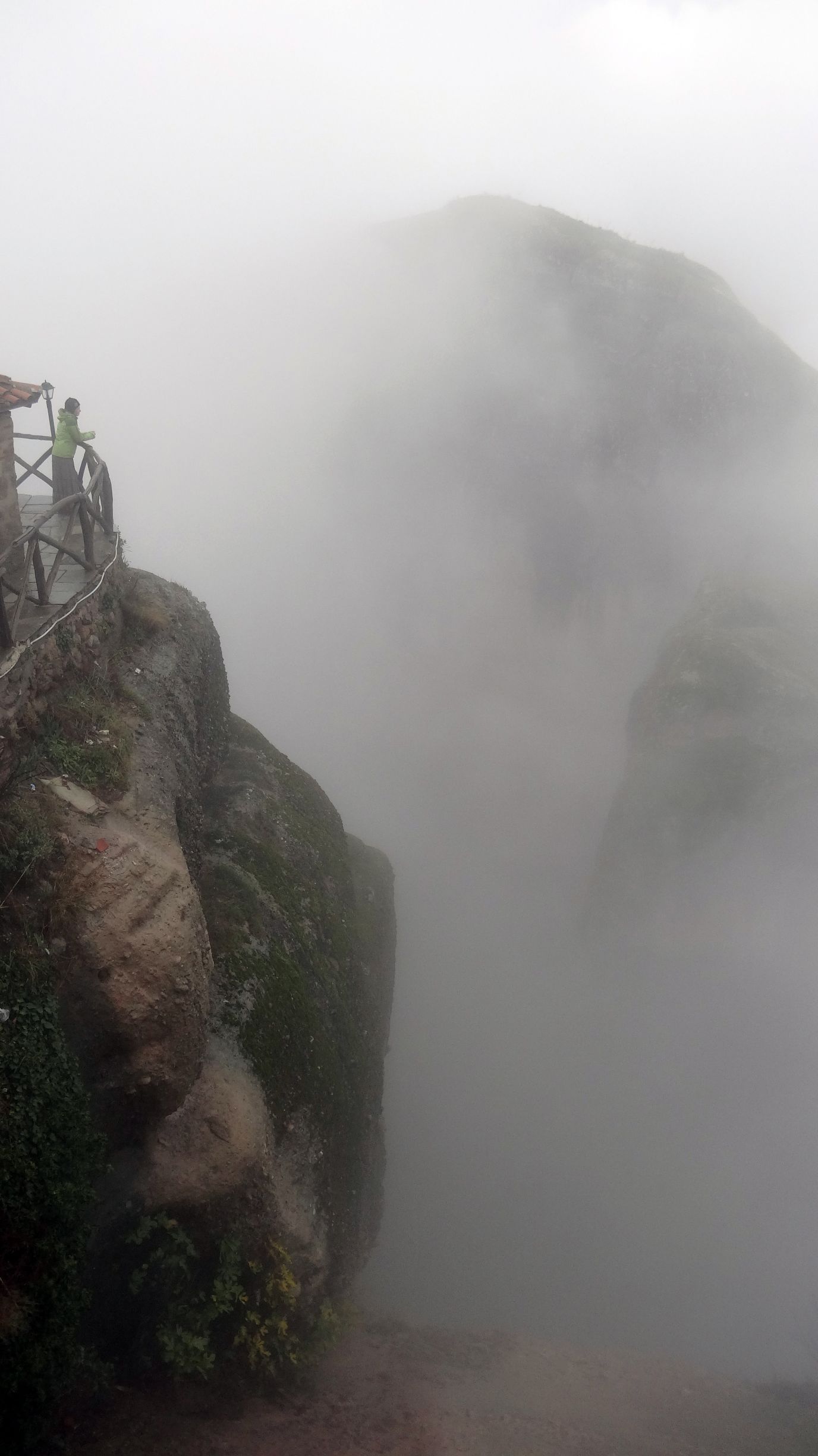 trying to find some of the amazing views 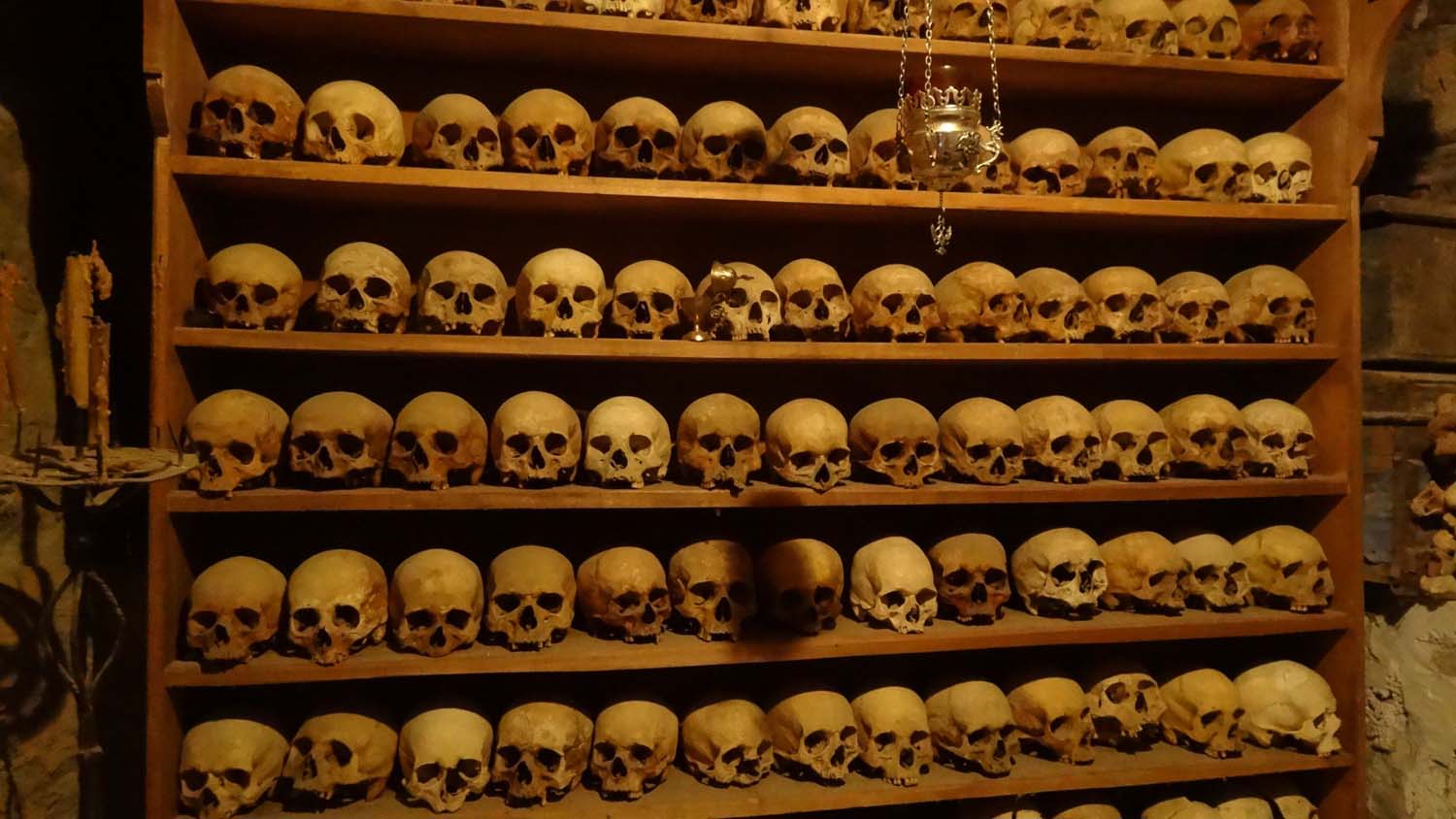 burying was not an option on the rock

Despite the mist, it was very impressive, but the bakery with its ginormous chocolate croissants was calling and quickly established itself as our favourite attraction in town. 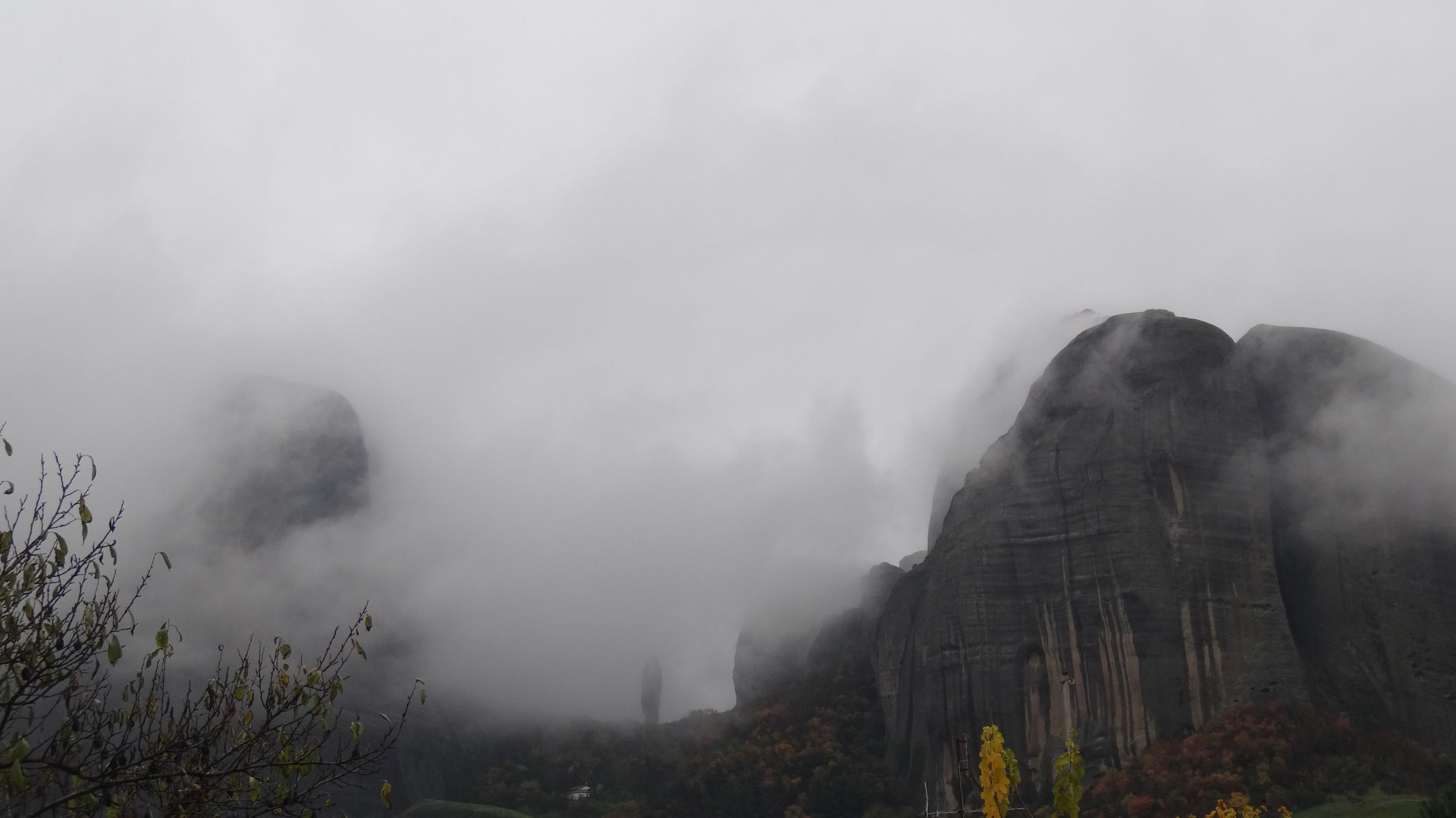 view from the village of the rocky outcrops

In Zagori we had a bit more luck. It was still raining when we arrived and did the short walk to one of the old and now empty monasteries for a view down the Vikos Gorge, which claims to be the deepest in the world (1,750m). The definition is a bit arbitrary: to be a gorge, the depth must be greater than the width, so deeper places such as the Colca Canyon in Peru (3,500m deep) don’t qualify.

It was spectacular nonetheless. Even better, we found a lovely restaurant serving local dishes which included a vegetarian pie so we spent the evening next to a roaring open fire. Just what we needed. And our luck continued. That night and the next morning it was dry. It was still cold, windy and overcast, but we had set our minds on the 12km gorge walk from Monondendri to Vikos and this weather wasn’t going to stop us.

Rugged up we started our descent into the beautiful gorge, disco legs settled in about half way down, but the views were spectacular. In summer it must be a treat to swim in the beautiful river. 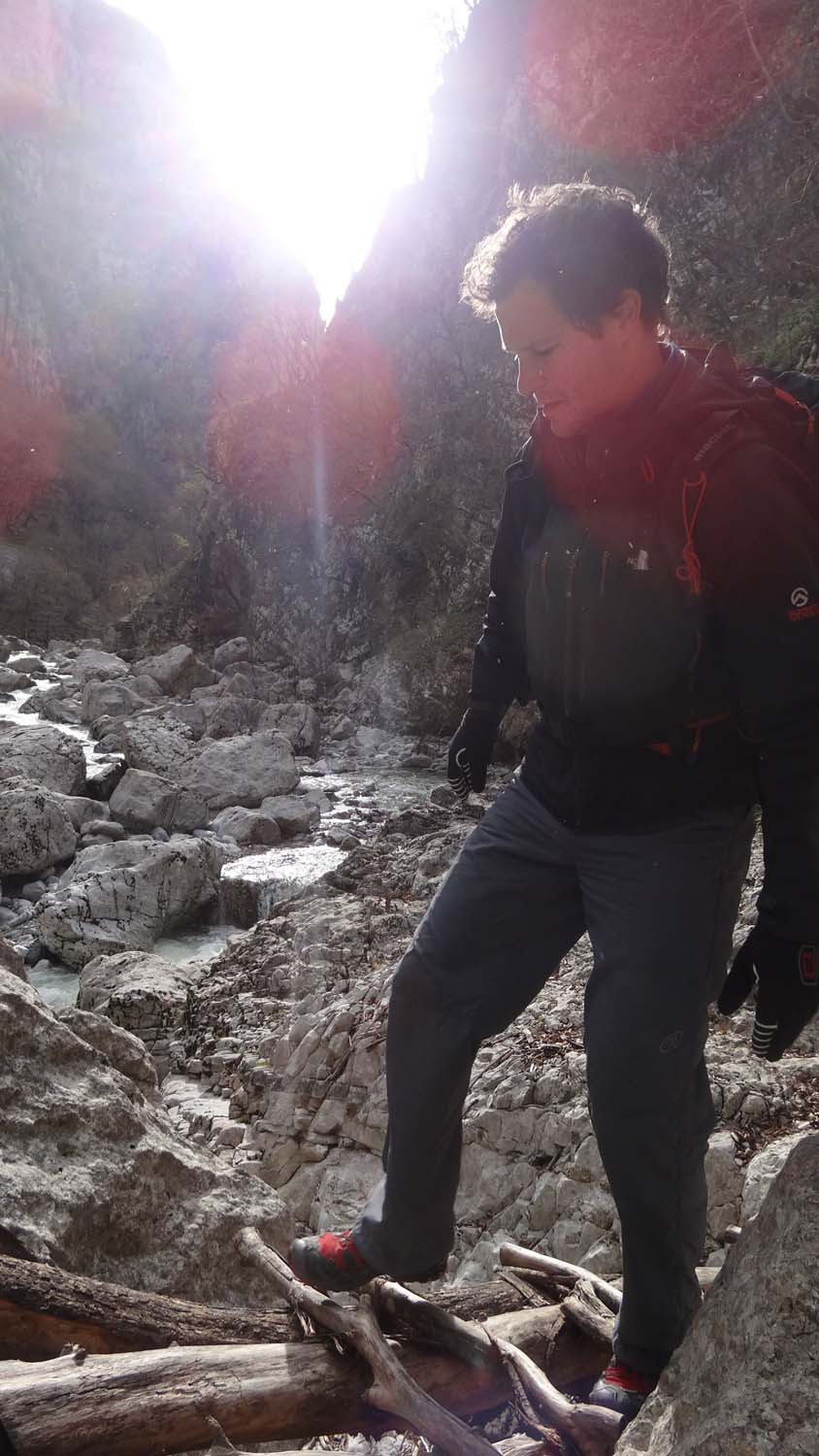 dodgy ladders on our trail in the Vikos Gorge 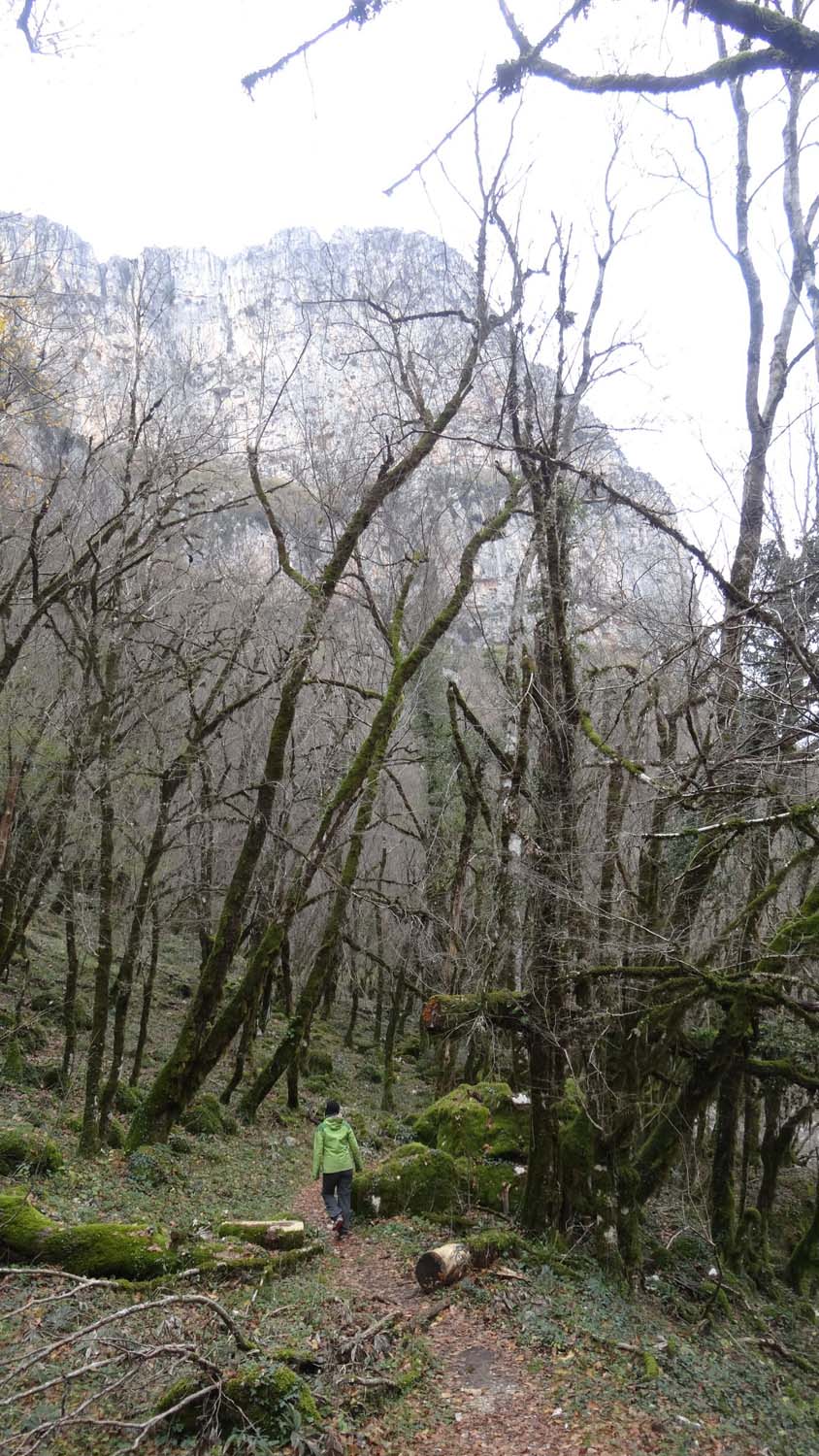 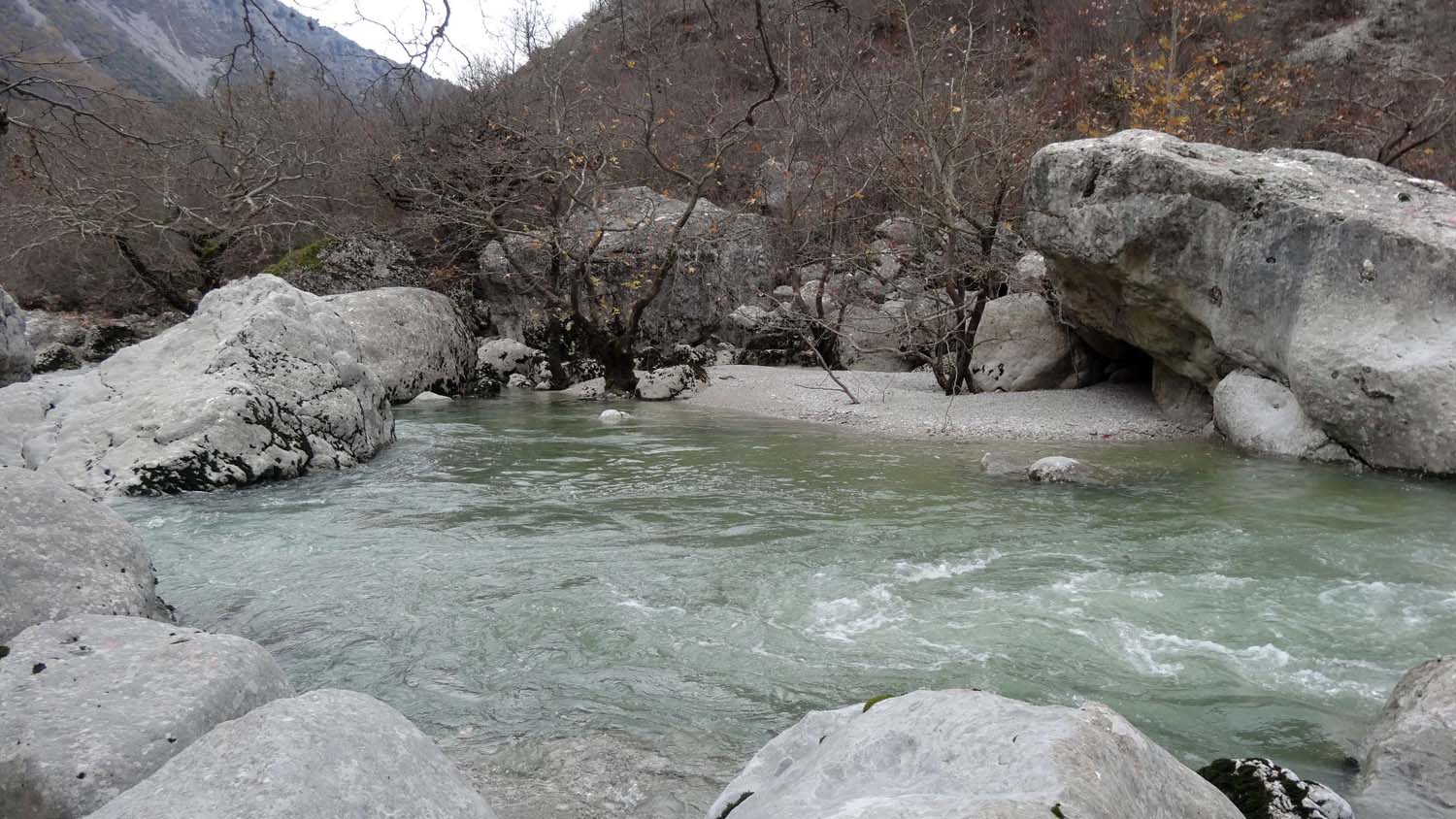 a great swimming pool in summer 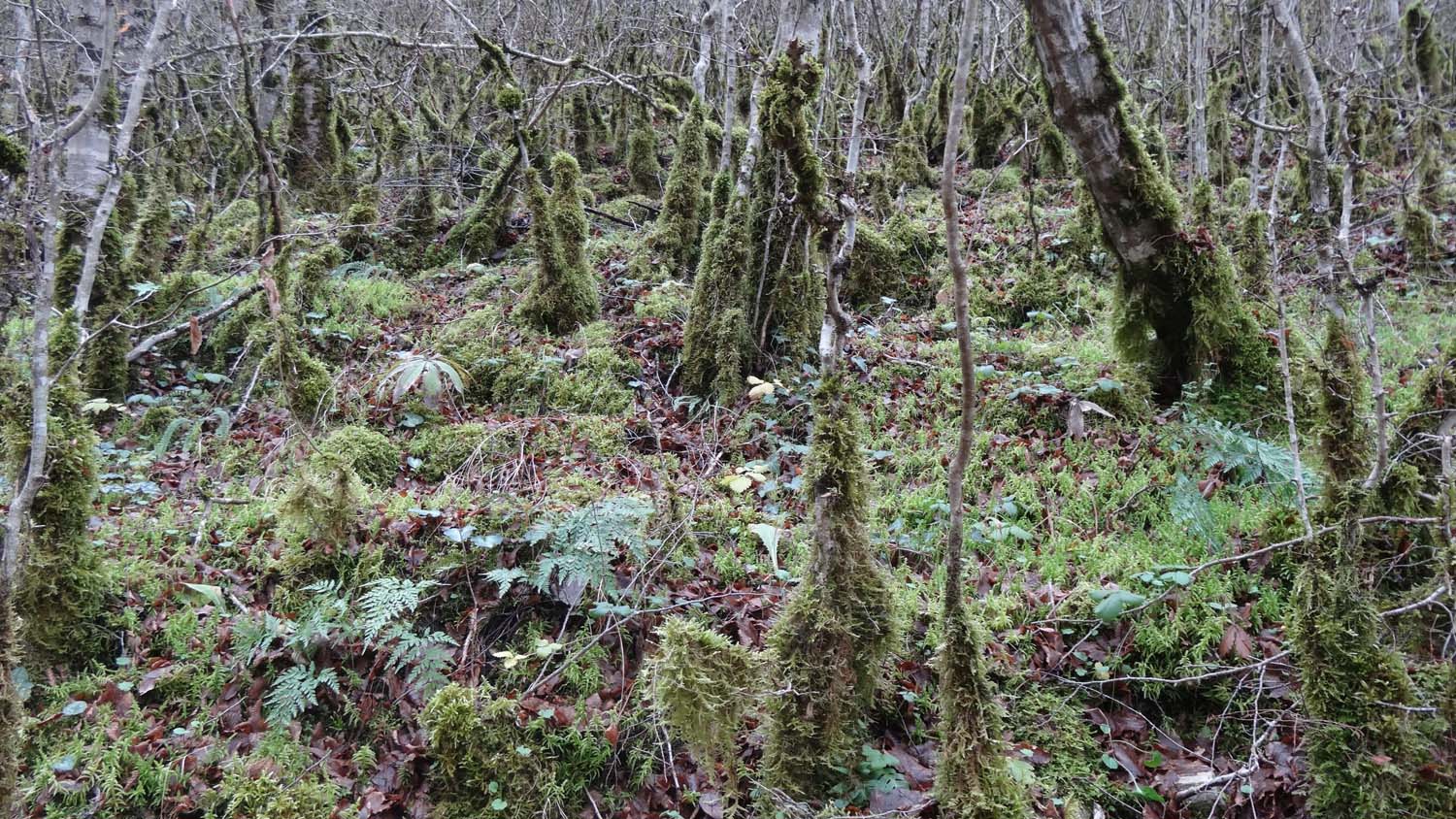 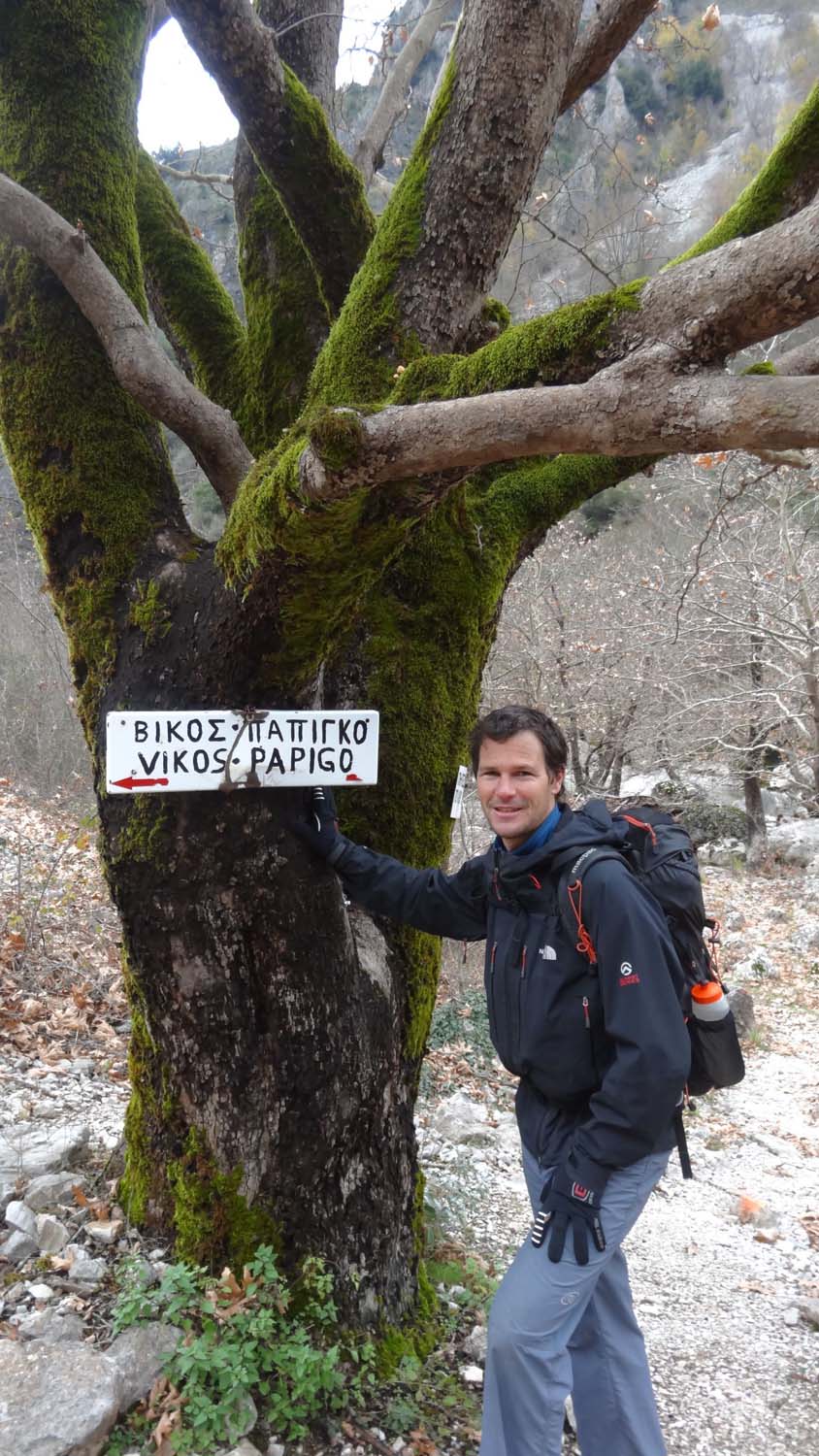 on our way to Vikos 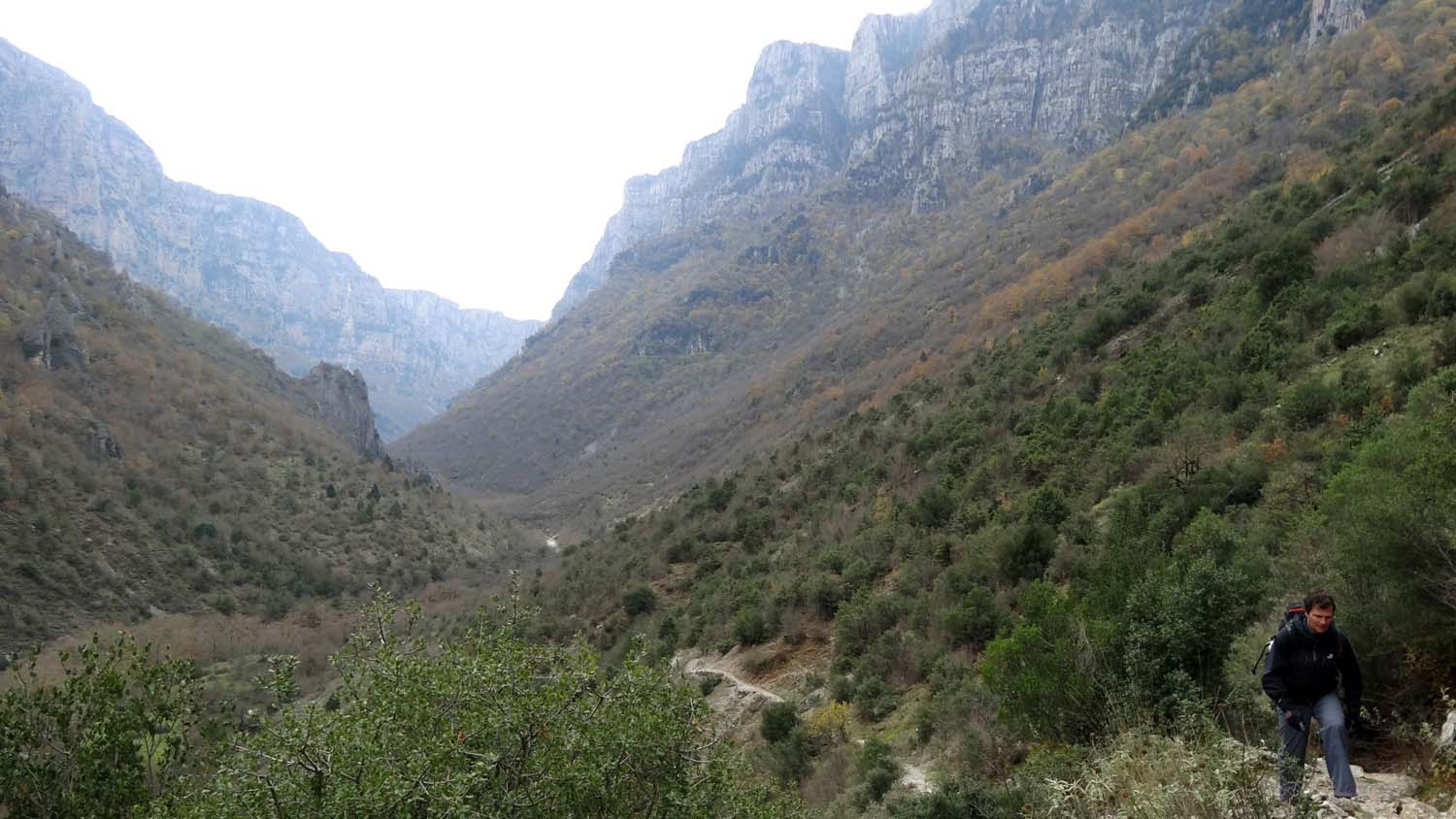 We kept a look out for brown bears, wolves and wild goats, but the most exciting thing we saw on that walk was a brilliantly coloured salamander. They are not scared at all and it just sat there whilst we took its picture. The colours are amazing. 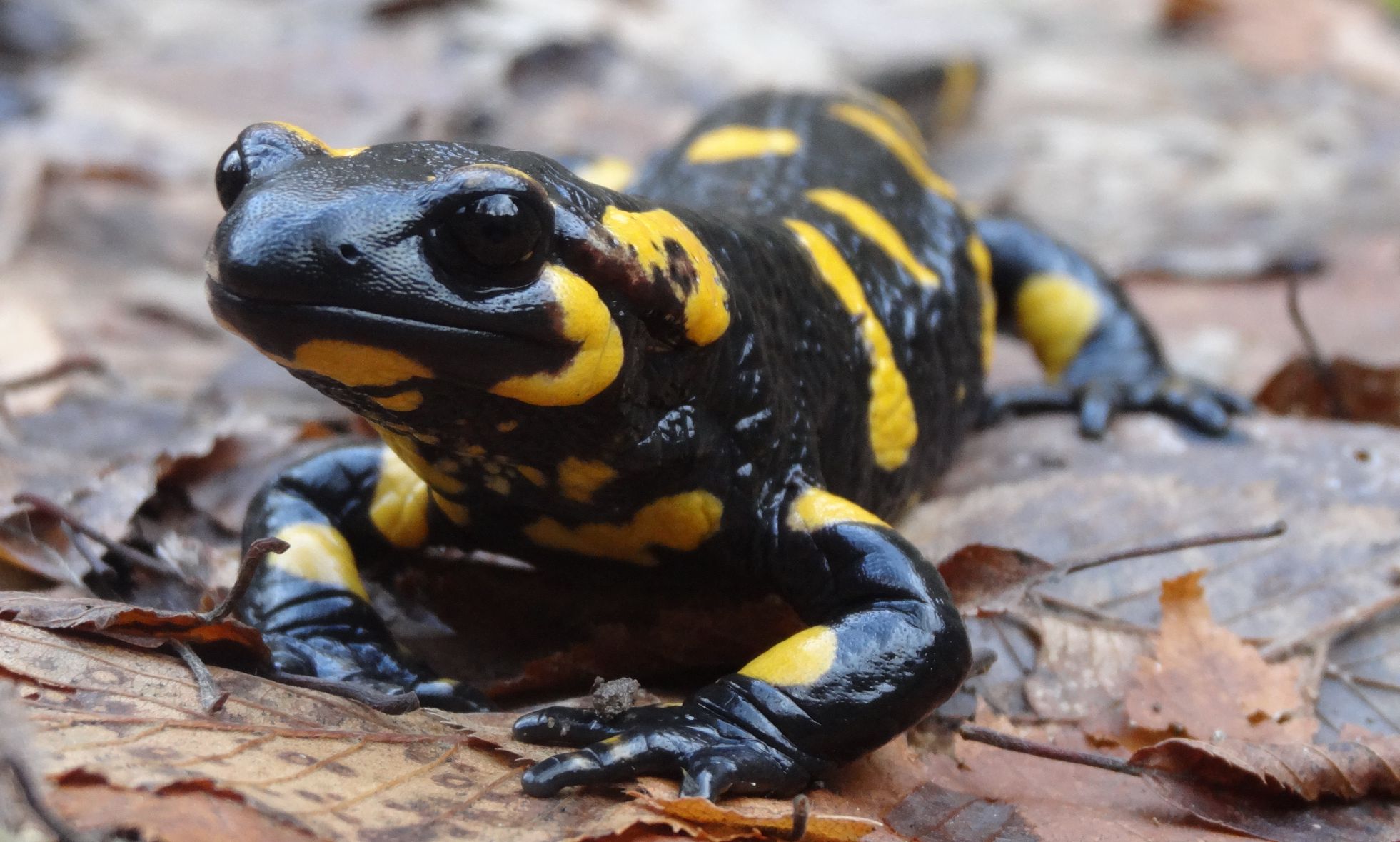 very cute salamander who wasn’t scared of the camera

At the end of our hike we even saw the sun a few times and when we asked around for a taxi in Vikos we were invited in for a coffee, freshly squeezed orange juice and some homemade biscuits by Dora, before Costas drove us back to Lara, the long way. 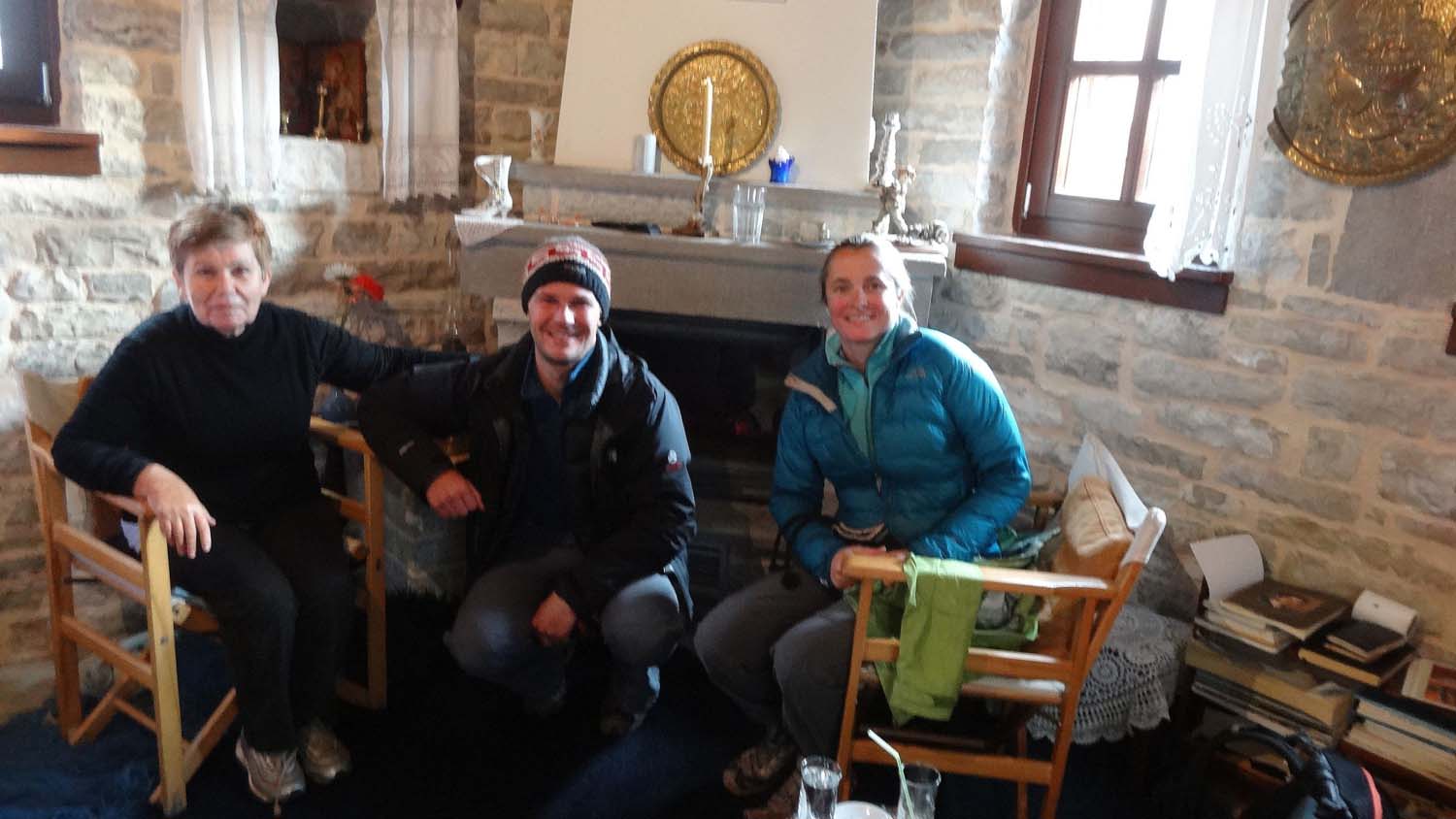 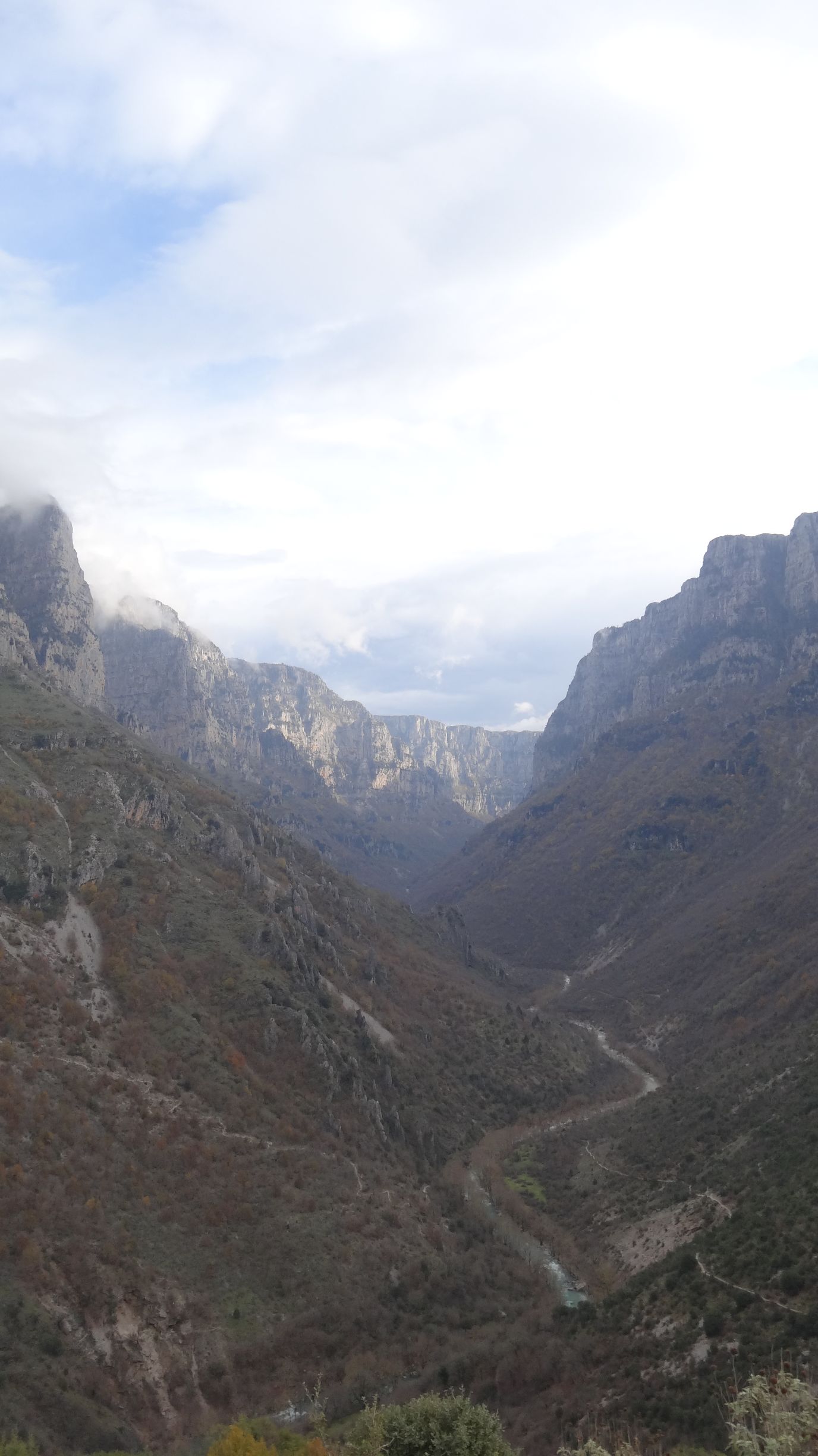 view from the village Vikos over the Vikos Gorge 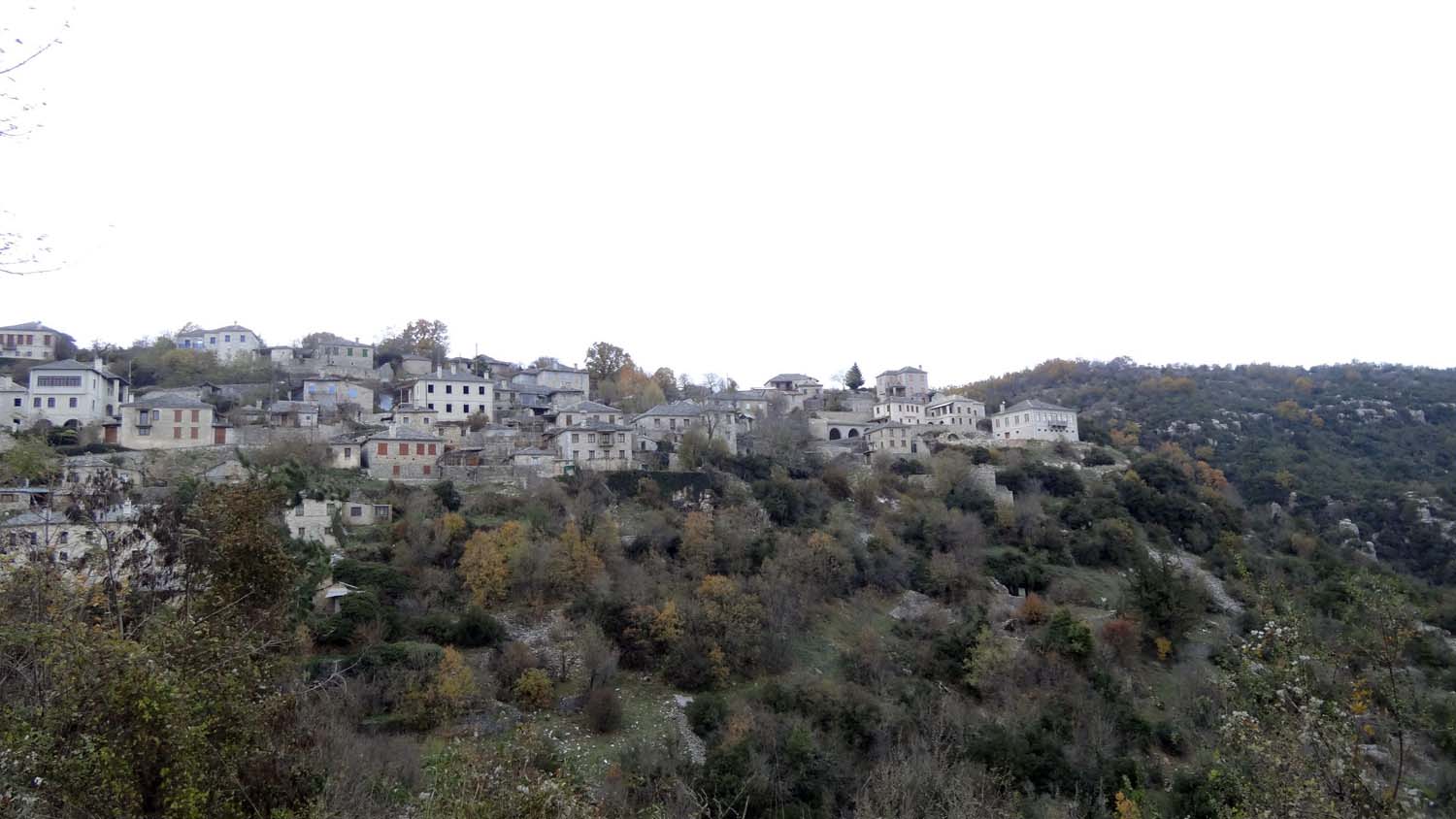 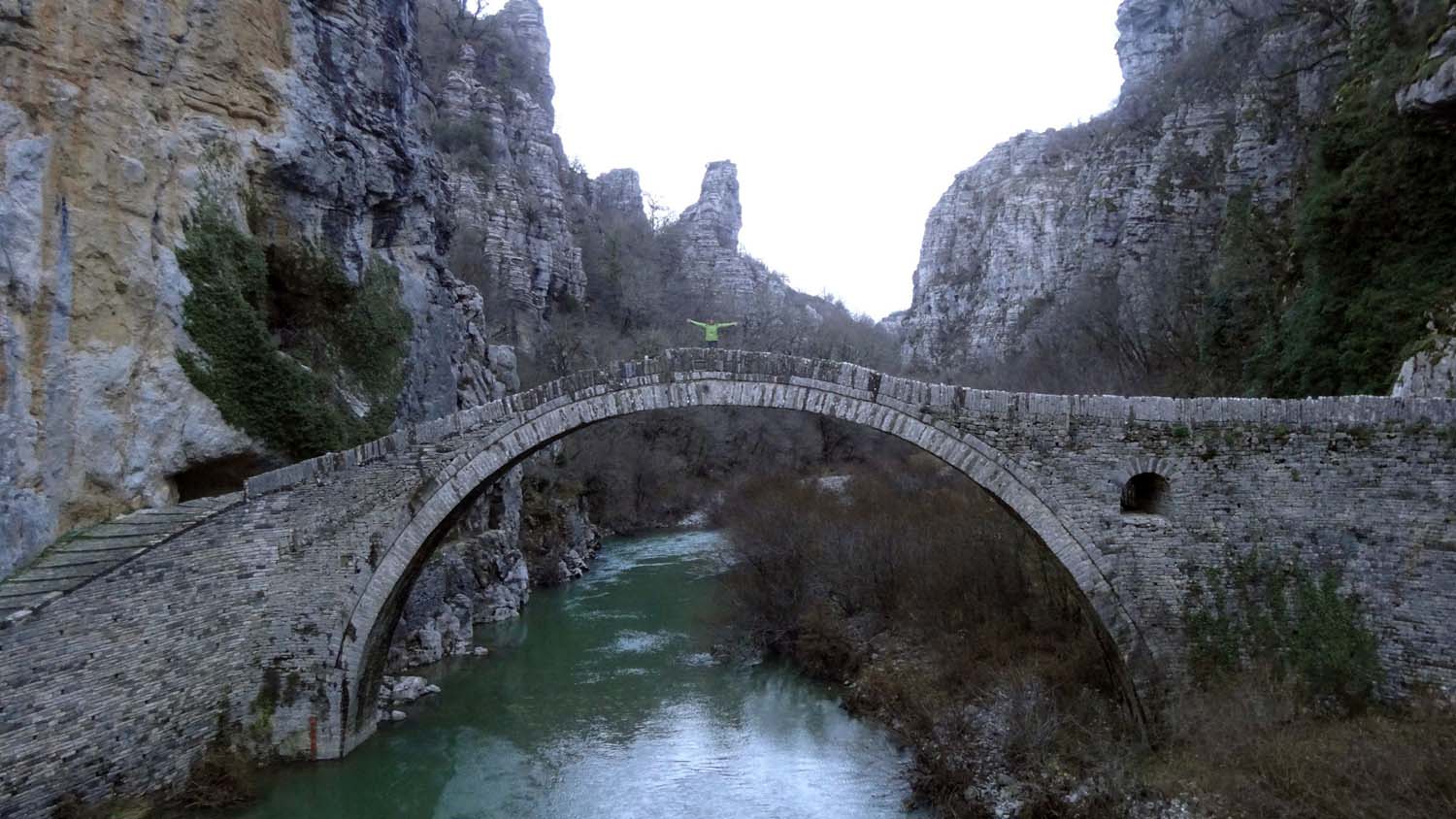 Noutsos (or Kokkoris) Bridge, built in 1750 over the river Voidomatis

It was quite an unusual Greek experience (no beaches or islands with whitewashed, blue roofed houses and blue waters for us), but we enjoyed Greece. We’ll have to go back one day for a more typical Greek experience. 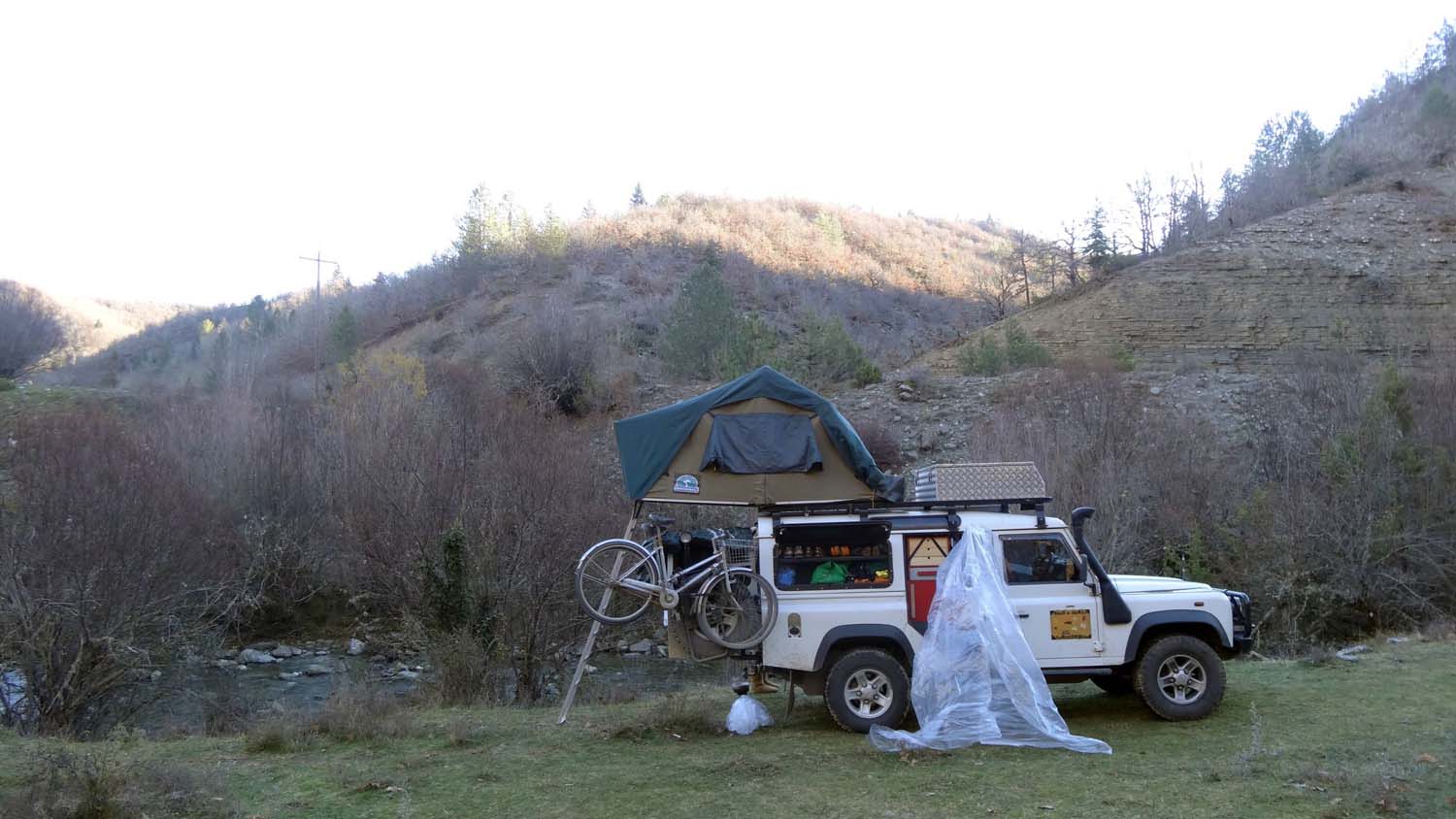