A few weeks before the long weekend we each had to fill in a questionnaire about our previous horse riding experience and Jon got a little worried about the questions they were asking.…

We were about to join 8 others (we had only previously met one of them) for a long weekend of horse riding on the Laikipia Plateau. And as you are riding through the bush and across the planes where the wild animals of Kenya roam freely, your horse might get spooked at any time or you might need to leave an area quickly for safety reasons. So there were questions like “are you able to control a lively horse…”.

Jon prepared for the weekend by taking some riding lessons in the little time we had left and Jude discovered she still had her old riding jodhpurs from 25 years ago (and they fitted perfectly!).

The weekend started well with drinks by the huge fireplace where we met everybody, followed by a gourmet dinner in the grandiose dining room of the lodge. We discussed riding histories, tried to remember people’s names and listened to Leszek play the piano. 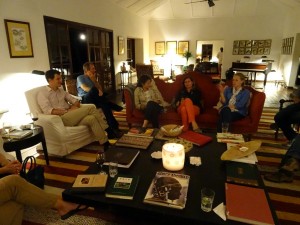 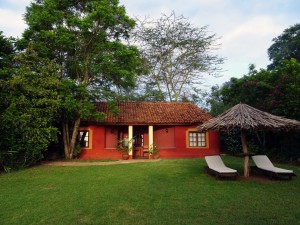 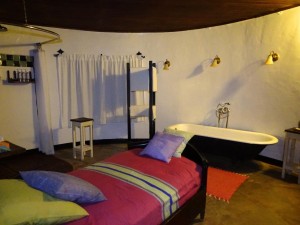 our huge bathroom with daybed! 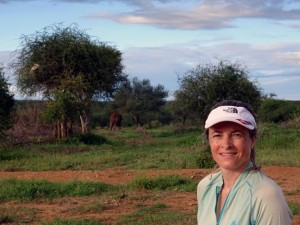 morning run and we spot an elephant

The next day started with a leisurely breakfast on the veranda before walking over to the stables. We were all given our horse and mounted eagerly. Jude’s Ethiopian pony came with red tape around the tail as a warning for others as Bella bucks. Jon’s ex-polo horse Alfie was chilled-out and made Jon feel in control. 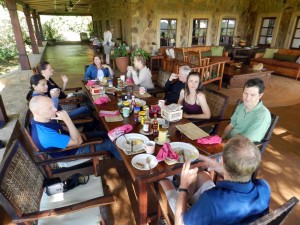 breakfast on the massive veranda of the lodge

We set off on the road but were soon into the bush. It was amazing to see the wildlife from a horse’s back. Getting relatively close to giraffes, zebras, antelopes and even the occasional elephant is just awesome. Apparently in the Maasai Mara, where they run 8-day horse riding safaris, you can even get very close to lions! 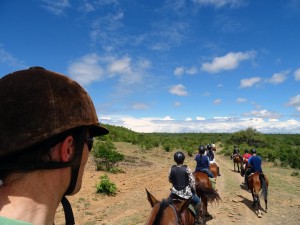 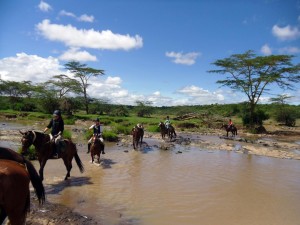 crossing rivers, we are the 2 last riders crossing 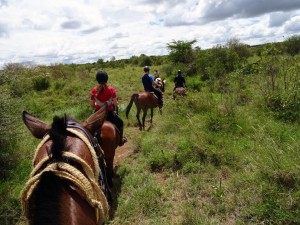 riding through the bush 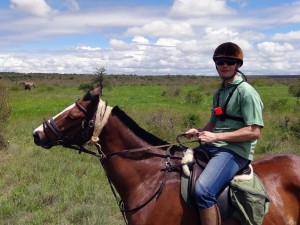 Jon with an elephant

A delicious lunch was served in the bush on a purpose-built platform overlooking a watering hole with the horses scattered around us, resting a few hours before we jumped back on again for the next 3 hours of riding through the bush to the northern stables. We got there just as the heavens opened and after riding through a huge herd of about 50 giraffes. 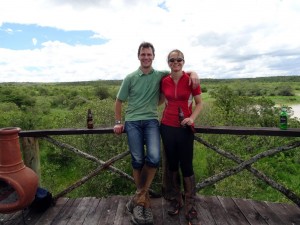 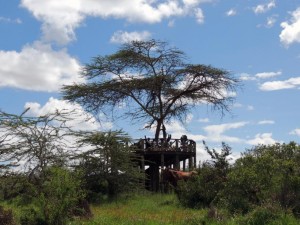 lunch on top of a platform overlooking a waterhole 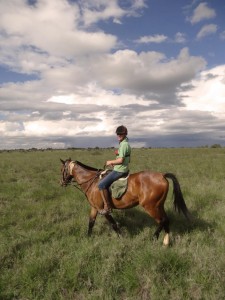 Jon on the planes of Sosian

dramatic skies above the planes of Sosian 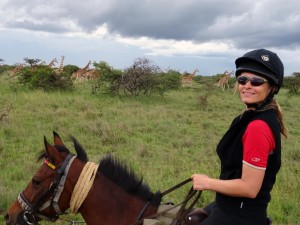 We left the horses at the stables for the night and jumped in the safari vehicle that would take us to our overnight fly camp. Only 2 people had fallen off during the rides that day, Ruby being very unlucky as her horse slipped during a river crossing causing him to sit down on his bum, leaving poor Ruby sliding off into the river. Luckily both riders and horses were unharmed and the riders jumped straight back on to continue the ride.

The fly camp was seriously impressive. They had erected a shower tent and a toilet tent, created a bedroom made from hessian nets, provided shelter for our bags and things, set up a bar (!), a perfectly laid dining table, and built a great fire. Now that is what you can call proper glamping! (glamorous camping) 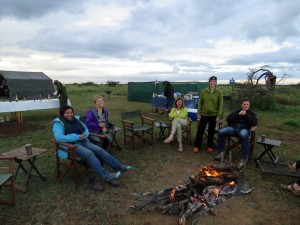 We enjoyed the hot (!) shower, had a few sundowners around the fire and then had beef fillet cooked on the open fire for dinner. Some said it was the best steak they ever had (don’t worry, they had a beautifully roasted butter-nut pumpkin stuffed with lots of delicious flavours for Jude too).

After a few more drinks around the fire, people went to bed and we asked if it was ok to pull our swag out of the ‘bedroom’ and sleep around the fire – with nothing between us and the animals. 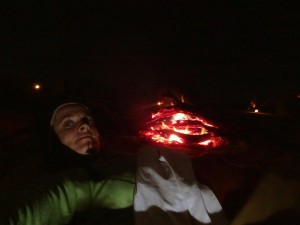 Jude in bed by the fire

Leszek also joined us and the 3 of us slept around the fire that night, watching the shooting stars and listening to the mating lions nearby. It was a night to remember forever and we hope we will be able to enjoy many more like that. 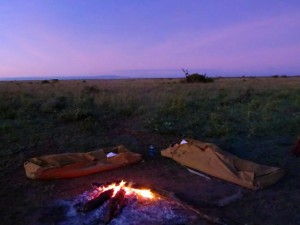 sleeping under the stars by the fire

The next day we weren’t even that sore, so we happily got back onto our horses for the ride to breakfast before returning to the lodge for lunch served by the pool. 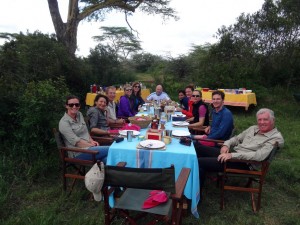 posh breakfast in the bush 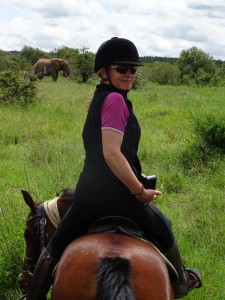 Jude and an elephant

That afternoon some people wanted to relax, others went fishing and we chose to go on a game drive. Unfortunately it rained whilst we were on the drive and we didn’t see many animals. It seemed they were all hiding for the wet weather. Luckily we had spotted 2 leopards, a hyena, reticulated giraffes and rare Grévy’s zebras on the drive in through the Laikipia plateau so we didn’t feel like we were missing out completely. 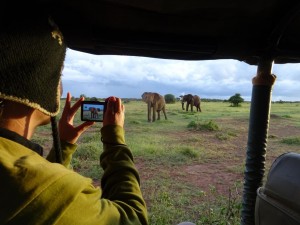 on the game drive

We couldn’t find the wild dogs or the lions on our game drive (they have several groups with collars so they can be tracked by radio signal), but we did see a few hyenas on the carcass of an elephant that had recently been shot (poached). Strangely the lions hadn’t found the carcass yet.

The wild dogs, the Grévy’s zebras and the reticulated giraffes are all unique to the Laikipia plateau and it was the first time we had seen the Grévy’s zebras. They are distinct from the plains zebra and so cute with their oversized ears! We’ll have to come back one day to see if we can find the wild dogs… 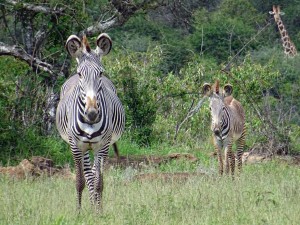 Grévy’s zebras, so pretty and quite rare 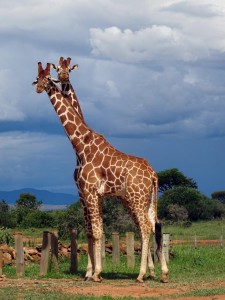 2 reticulated giraffes, probably the most pretty giraffes in Kenya

That night we played snooker with Mark and Ruby on a full sized table. Who knows how they got it to the lodge in one piece? We had a great time trying to remember all the rules and of course trying to get the balls in the pockets. It’s not easy! 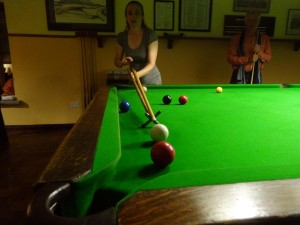 The next morning was our last ride and this time they had decided to split up the group in 3. Jude, Mark and Leszek went for a fast ride with some cross-country jumps. Jon joined the group that went for some trotting and cantering whilst another group took it easy and went for a slightly shorter ride before all meeting at the same time next to the river for another breakfast in the bush. 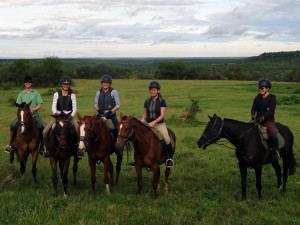 Jon and his harem 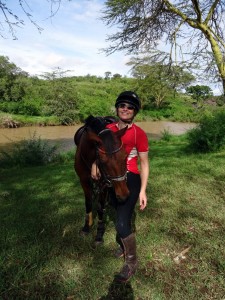 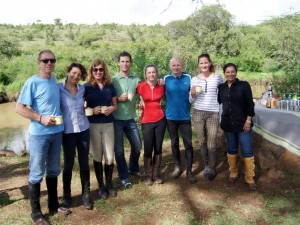 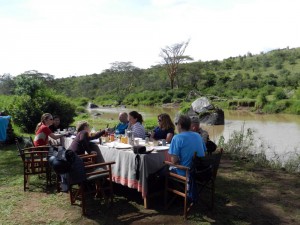 breakfast by the river

Hippos in the river, beautiful yellow fever trees around us and with a fantastic swimming hole with waterfalls just a 5 minutes’ walk from the breakfast table. Most of us went for a swim, but as you had to jump off a 7m waterfall to get in, not all were keen. The fact that there is a perfectly safe swimming hole right next to a river with hippos made it even more special. What a way to end a fantastic weekend! 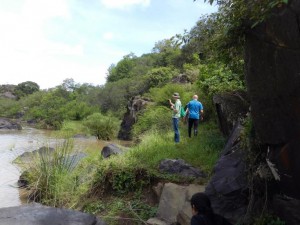 Jon walking to the swimming hole, taking pictures of the hippo in the river (can you spot the hippo?) 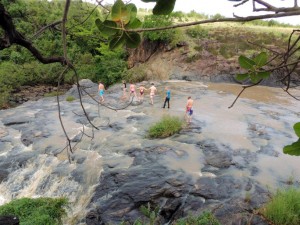 walking to the 7m waterfall 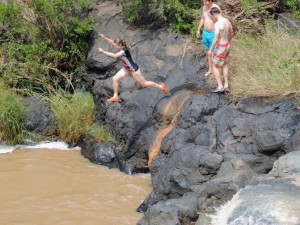 Jude jumping in (this is not the 7m drop obviously!) 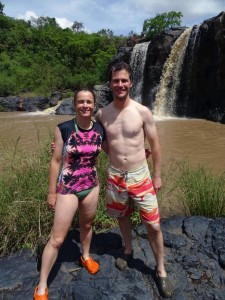 Jon and Jude at the waterfall and swimming hole