Opening night was on Friday 27th which we missed unfortunately. But on Sunday after coming back from the south, we headed out to the Garden of Unearthly Delights for our first Fringe indulgence.

The Garden is great fun and even on a Sunday evening was busy, the show we went to see: Sort of the Rings, was really good! We laughed a lot and had a great time. Afterwards we strolled around the garden and watched the Pyrophone Juggernaut perform across the street from the Garden. That was really cool.

Imagine a ship with sails made from metal pipes (the organs) and lots of other metal drumming bits (see photos). And the performers using fire and drumsticks to create songs. Really cool and great sounds with a funky rhythm too! 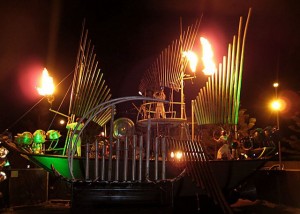 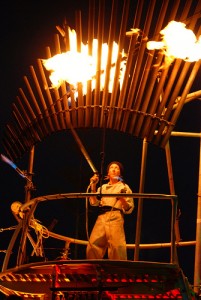 they play the pipes using flames amongst other things

We’ll be watching some more shows, eating and drinking a bit more in the Garden.

Monday night was not much of a success. ‘A dingo stole my latte’ had 3 performers. Two were ok, but one was a bit sad actually… And when we got back to the car we had a parking ticket too ;-( Hopefully Tuesday night will be better!

Hmmm, Tuesday night was not much better. It was rather strange and left us wondering what we just saw…

Wednesday night was much better as the 3 performers tried to protect the last bucket of water on earth… Dimitri and Jude certainly had a good laugh! Wednesday arvo Jude went to the aboriginal cultural event on my own as Jon was (again) in Perth. They talked about the culture, sang and danced, explained things as they went along, we danced (Jude was an emu, a kangaroo and a brolga) and learned about bush tucker and some bush medicine (green kangaroo apples are used as a morning after pill…!) and survival techniques (chew on ‘leaves’ of sheoak to keep all moisture in your body when you run out of water). Afterwards they served some bush tucker and we checked out some of the awesome paintings they have on display in the centre. 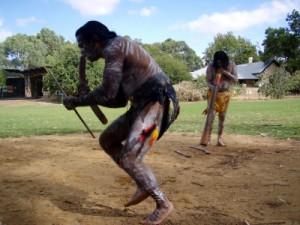 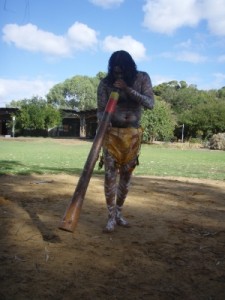 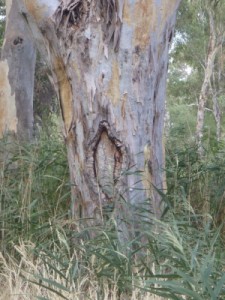 a shield was cut out of this tree years ago 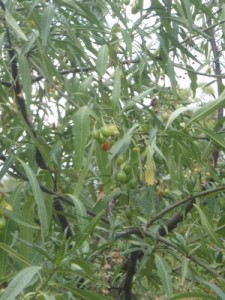 green kangaroo apples – used as the morning after pill… 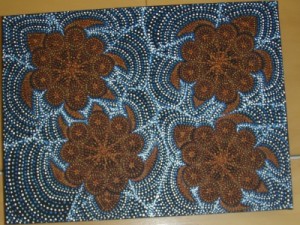 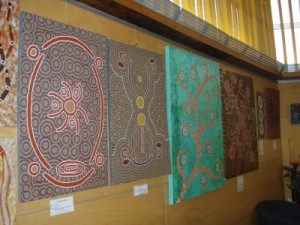 We joined in a Flash Mob Mission from the Playground (famous for the ‘freeze’ in Grand Central Station New York) was great fun! We all had to wear either yellow, red, blue or green tops and bring an umbrella and an empty balloon… Oh and of course our i-pods with the instructions loaded onto it so we could all start at exactly 12 o’clock. If you ever have a chance to participate in one of his missions: go for it! 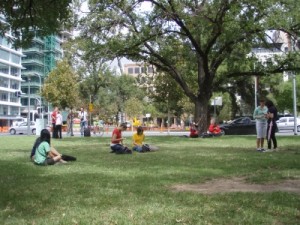 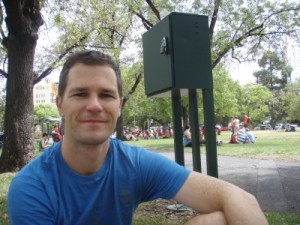 waiting for the noon start in our primary colours 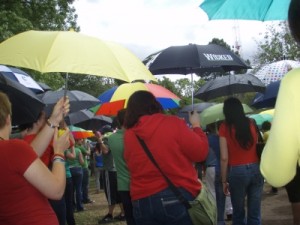 with the umbrellas up 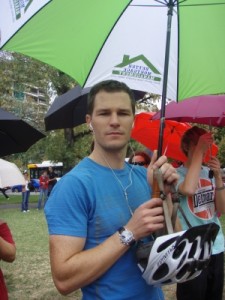 listening to the ipod for instructions 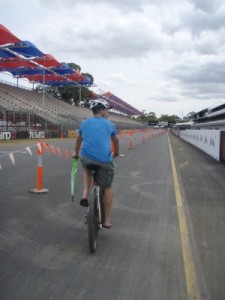 cycling home across the Clipsal 500 track 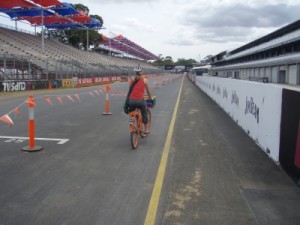 On a Friday night we went to the opening night of Faulty Towers – a dining experience. That was also amazingly well done and a heap of fun. If you’ve ever watched Faulty Towers and know what goes on in their dining room… you know what happened to us as we were trying to eat a meal, served by Basil, Sybil and of course Manuel… Can definitely recommend it! 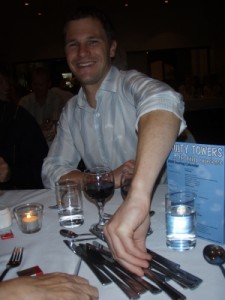 Jon getting knives at our Faulty Tower dining experience 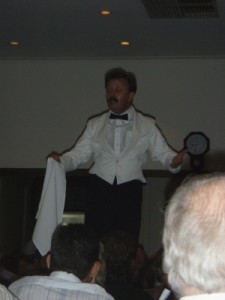 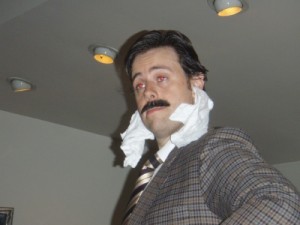 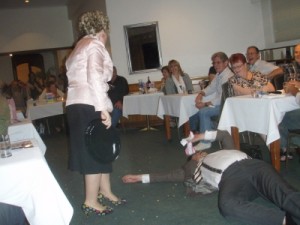 and of course Sybil trying to rescue it all

Last thing during the Fringe for us was Womadelaide. It’s a fantastic world music festival with about 7 stages. We spent only Sunday (the last day) at Womadelaide and we were exhausted! So much music, great food, lots of stalls and heaps of relaxed people all trying to enjoy the amazing atmosphere. We met up with Cynthia, Dimitri and Jo & Michael and the kids. We all kept coming back to their spot near stage 1, sometimes splitting up if people wanted to see different things. The quality of our little camera is not great when recording so I’ll give you some links to their recording on you tube. 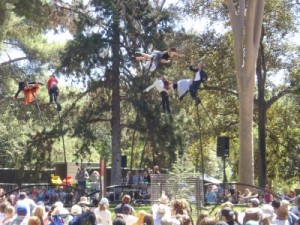 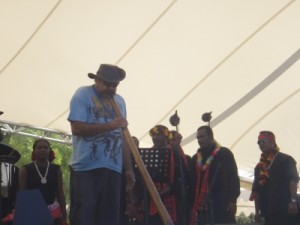 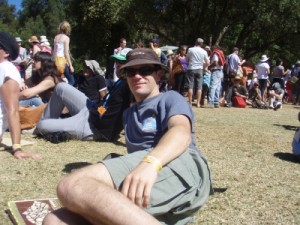 it was hot that day! 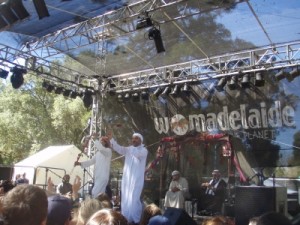 really cool music from the Bedouin Jerry Can Band

hanging out in between shows 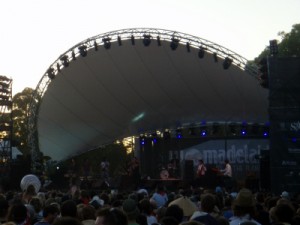 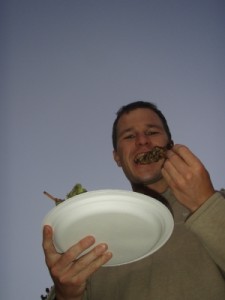 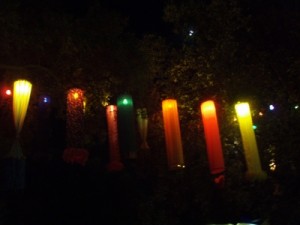 Mark Atkins on didgeridoo. I recorded him playing with another group. Unfortunately you can hardly here on my recording that he is playing. So this is a link to his solo performance on you tube.

The Bedouin Jerry Can Band are a group of nomadic Bedouins from the Sinai who perform Bedouin Sufi and Rabba folk songs on traditional instruments and an assortment of scavenged percussion, including jerry cans and ammunition boxes. Their perfomance includes a coffee grinder who prepares and serves coffee for the audience, reflecting the ancient links between Bedouin culture and coffee. I also recorded a little bit of the Bedouin Jerry Can band. Quality again is not great. If you want to hear a better version check this out on you tube again.

If you want to get an idea of what the Juggernaut Pyrophone sounded like, check out the link to you tube. It’s not recorded in Adelaide, but the performance is pretty much the same. Absolutely amazing!