We knew what we wanted, we just didn’t know it would take so long before we would get it and how hard it would be to figure out what code we needed to actually order it.

We wanted a drawer, to trap the cold are in the bottom when you open it, it seemed like a good idea. The ones we liked were made by Vitrifrigo and there was one shop here we could have a look at the different models. But then we realised there was another model. And it was exactly what we wanted, but not anywhere available in the country.

The ‘old’ version of the fridge requires you to lift and lower 2 pins every time you want to open the drawer. We could already see that end in the cheese melting and the beer getting hot as we would most certainly forget to close those pins at times. They had a newer version with a latch that locked the drawer automatically when closed. And it was a one-hand job to open it, just lift the latch up and pull, very similar in working mechanism to our latches on all our drawers and cupboards. However, it was a fridge-freezer, meaning you could either decide to run it as a fridge or as a freezer (not both at the same time as there is no divider in it). But for that extra option we would have to add 15kg more to the palace and we felt we would never use it as we don’t have another fridge somewhere. It was also more expensive so when we discovered there was an ‘in-between’ option where we could have the nicer locking mechanism, but not the freezer option, we wanted that one. We spent quite a bit of time making sure we had the right codes before we ordered it as they are made in Italy. We even emailed directly with the company to verify as the shop here in Australia wasn’t quite sure either. In the end we used the right order and 7 months later we had a phone-call to say we could pick up the fridge.

Job done you would think. Not so.

We picked it up and at some point we had to fit it in the palace to see exactly how much space it took and how we would have to build around it. 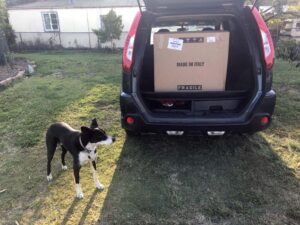 our fridge arrives, and of course Spike is there to check it out 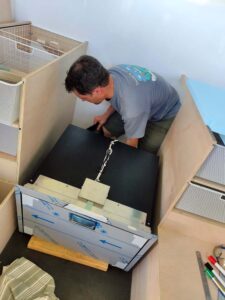 adding the fridge to the palace

To cut a long story short, we moved it too often and broke the pipe that connects the fridge to the compressor. When we bought it we thought it was a great option to have it separate to the fridge, but if we had know what we know now we would have definitely gone for one that has it built it. Or we would have somehow mounted it to the fridge at the back so the pipes wouldn’t ever have to move. We ended up with quite a tricky operation to get it fixed, but eventually we did manage to put it in place and it is not ever leaving that spot anymore. Too bad we forgot to add the additional insulation we wanted to add to the sides and top. But hopefully she will do ok the way she is. 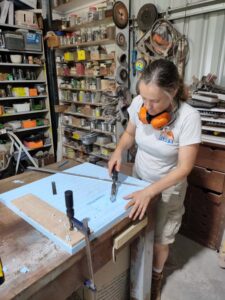 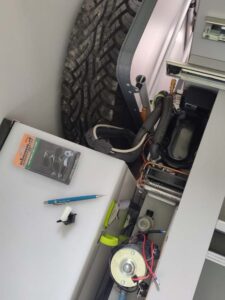 we don’t have much space for everything behind the fridge 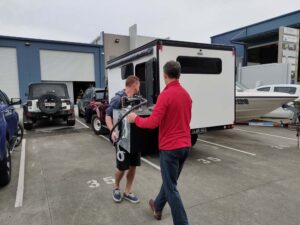 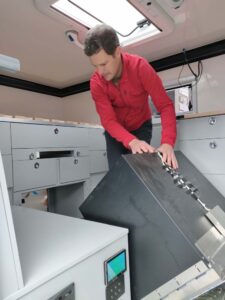 it’s going in for the final time 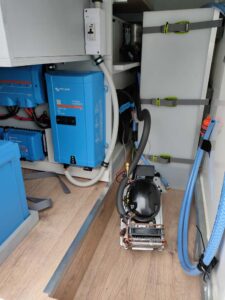 the separate air compressor – very tricky to deal with

We are still very happy with the drawer now it is in. 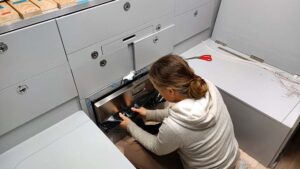 and then the moment is finally there, we can peel of the protective stickers 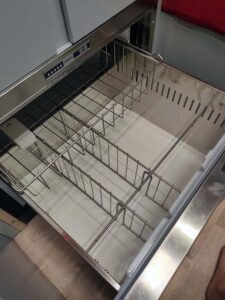 and the inside with the white nitrile on the bottom

It is whisper quiet, which is great as we sleep pretty much straight on top of it and doesn’t seem to draw too much power (at the moment, the real test will come when we are using it day in day out for weeks on end). We added a bottom of white nitrile to protect it a bit and to stop things sliding around too much. White nitrile is basically food grade rubber, the other bit we glued on the kitchen hatch so we don’t damage the fiberglass and don’t have to worry too much when we put a hot drink on the hatch. 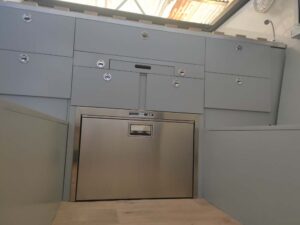