Fraser for xmas!! On Friday morning Marjolein and Jude go shopping for the small crew going to Fraser Island for xmas. At 2pm we meet up at Marjolein’s place where Bjørn has also arrived with Stefan (a German climbing friend) and Olga – fresh from the airport.

We jump in the cars and start the short journey up to Rainbow Beach where we have a booking for the campground. We get there after dark and first have dinner at the hotel where they serve fantastic steaks and (lucky for me) also a lovely salmon. As soon as we arrive at the campground we quickly pitch our tents and pull out the awning because it is raining. With the addition of Olga’s tarp we create a perfect little shelter to have a drink before going to bed.

The next day it rains on and off and after deflating our tyres we drive to the ferry at Inskip Point – only a few km’s away. The ferry quickly fills up and soon we’re away to Fraser Island – the world’s biggest sand island. 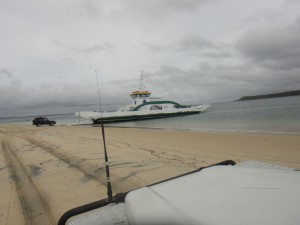 the ferry to get to Fraser Island

The tide us high so we have to take the inland route for the first section, a pretty shitty and corrugated road, but luckliy we are soon on the Eastern beach where we make quick progress towards Waddy Point where we camp for the first 3 nights.

On our way we have lunch at Lake Boomanjin in a bit of a drizzle and we drive the green scenic drive past Lake Benaroon and Lake Birrabeen. At night we watch sunset from the beach near Waddy Point and nearly get washed away from the little sandy ridge where we are sitting.

The next morning we wake up, have a leisurely breakfast, celebrating xmas with the awesome pressies from Olga and then realise we are cut off from the rest of the island due to unusual high tides because of a combination full moon and a cyclone further away to the East. We check out the champagne pools where Bjørn and Stefan get pretty cut up because they sit in one of the channels when a big wave comes in that pushes them right past Jon who manages to escape by jumping behind the rock. We patch them up and drive to Wathumba on the West coast where we have a picnic lunch and explore the creek area. Jon, Olga and Jude for a run on the way back followed by a quick swim in Ocean Lake where we pick up a stranded paddler who we drop off at the campground so he can alert his mum to pick up his dad. We have a Christmas chocolate hunt followed by a delicious xmas dinner and go to bed not long after that because we are planning to get up at 5AM so we can get past the beach before Indian Head before the tide comes in to high again. 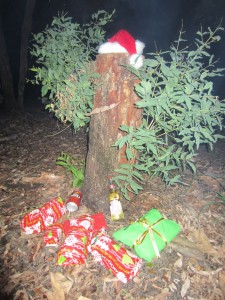 our xmas tree at our Waddy Point (first) camp site 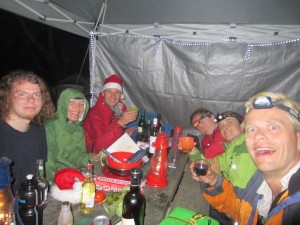 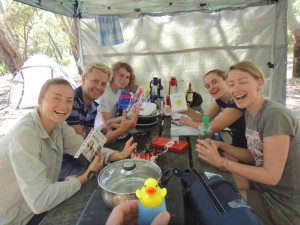 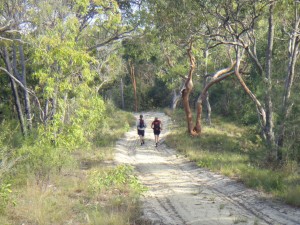 Jon, Jude and Olga going for a run

We have breakfast at Dundubara before we hike to the Wungul Sandblow for some playing in the sand before we continue to Lake Bowarrady for a swim. Bjørn and Jon run the same route back from there, Marjolein and Stefan walk back and Olga and Jude run back a different way to the beach where Jon is waiting to pick them up. We decide to check out Eli Creek as we are so close and enjoy floating down the little creek, watching the fish and eels and playing with the water bouncy ball. A last quick stop at Indian Head for a drink and some nibbles before we have to hurry back before the tide will cut us off… 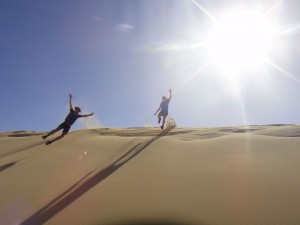 Bjørn and Jude playing in the sand dunes at Wungul Sandblow 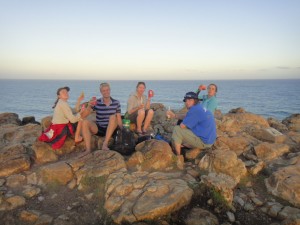 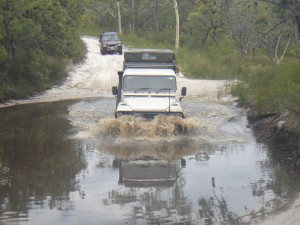 driving the trails on Fraser Island

The next morning we do the same again and leave really early to avoid being stuck in the north the whole day, but this time we have to pack up everything because we are moving to a different campground in the South: Dulara – a campsite without any facilities.

We stop for a few minutes at the Pinnacles before having breakfast at Lake Garawongera (?) where we watch heaps of turtles and do a short loop around the lake. The next stop is Lake Wobby, but instead of driving to the lookout and the carpark we decide to hike in from the beach. It’s only 3km and we enjoy the hike through sand dunes in the forest. We take our empty cartons cardboard so we can surf down the sand dunes rather unsuccessfully… hahahaha that would be an understatement! We have fun anyway and swim, relax, build sand castles and persist in trying to sandboard on different dunes. A great way to spend an afternoon! 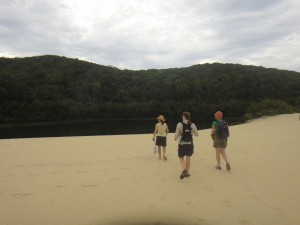 heading for a swim at Lake Wobby 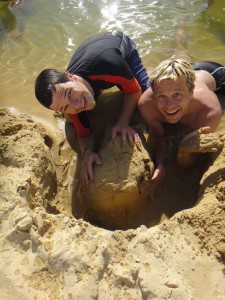 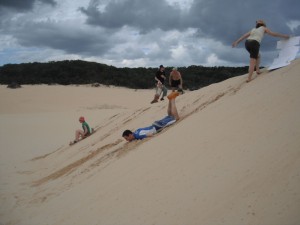 face plant? no we are trying some sand boarding – not a real success… 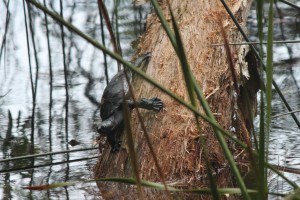 a cute longneck turtlewas sunbathing on the tree

Just after pitching our tents at Dulara a storm approaches so we quickly set up the gazebo with all the tarps we have to cover 3.5 sides of the gazebo and we manage to stay pretty dry this way! 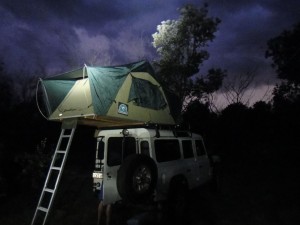 our next camp site at Dulara

The next day we park the car at Central Station where we have breakfast before running or walking to Lake Mackenzie for a swim. It is amazing how busy it is on the beach there! We go for a swim, have lunch in the fenced off picnic area and then all walk back the same way the walkers went earlier so we can stop for another swim at a tiny private lake where we find our own turtles! Amazing, if you are happy to walk for a little bit you can find the most beautiful spots and have them all to your self! 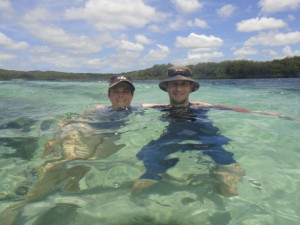 a swim in Lake Mackenzie 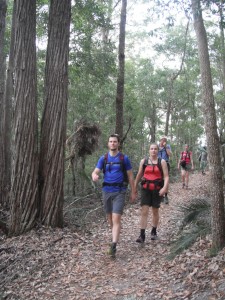 instead of driving to Lake Mackenzie as most people do, we decided to walk / run there and swim in our own private lake with the turtles 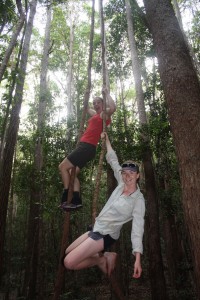 vines are great fun as swings and for climbing

When we get back to Central Station we walk around the creek a little bit, before going back to our campsite for our last night already… The next morning we get up early again to catch an early ferry back to Inskip Point. We are lucky with the tide this time and can drive back over the beach. A little later we are cleaning the cars followed by a well-deserved coffee in Rainbow Beach. The cafe is rather slow with the service and we have to hurry up now to make sure Olga can catch her plane! 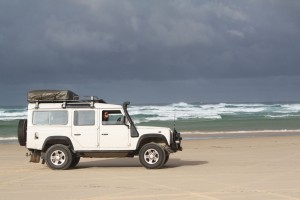 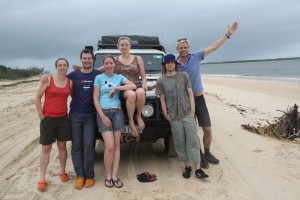