This is the route we drove in Europe. If you are interested, you can click on this image below and it will take you to the actual Google Map online. You can then zoom in (or out) to have a more detailed look. 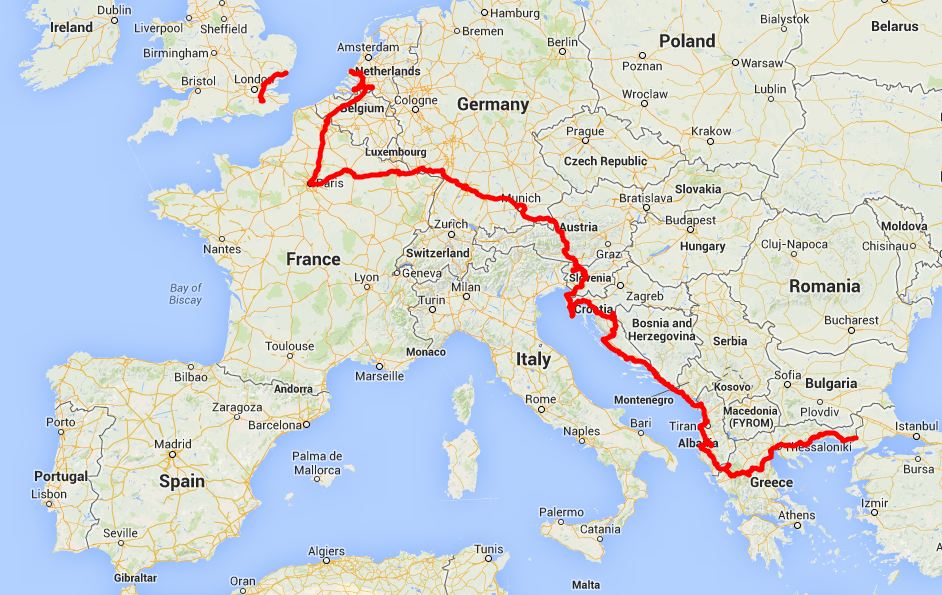 The countries we drove through in Europe:

As we both have European passports, we don’t need to apply for any visas in advance. One less thing to arrange before we leave…

In Europe every car needs a Green Card. It’s your third party insurance and it is compulsory. As we have an Australian registered car, this is not easy to find. Australian companies don’t insure for Europe and most European companies only insure cars registered in their own country.

As we were driving through Iran we started our third party insurance there. Some companies include Iran in their policy, some don’t. Make sure you check. Another country to check is Turkey, as some companies only insure the European part of Turkey (the part west of Istanbul, connected to Greece and Bulgaria). If you need Turkey covered, make sure you double check this. Most other European countries are automatically included with all companies, but of course it’s always best to check before paying.

Another downside of all companies we spoke to and got quotes off, is they only offer cover per month. You can have one, two, three, four or more months, but they don’t offer 3 months and 10 days or even 3.5 months. We didn’t ask if it was possible to get coverage for longer than 4 months as we didn’t need any longer.

Below is an overview of the companies we asked quotes from (to be added). We used Tourinsure (German company) as they were the cheapest option including Iran and Turkey. They also offered to email a pdf of the green card so we could print it. We had the original mailed to an address in the Netherlands for no extra charge. If you want to receive the original whilst traveling, they offer a courier service to an address of your choice too, for example a hotel (probably between 75-100 euro extra for this).

We had decided to cross the border in the evening as it had already gone dark after leaving Galipoli and we didn’t want to ‘waste’ driving time the next morning as we are now racing across Europe.

The first sign of the border approaching was the enormous line of trucks waiting patiently. They left a lane open for cars who all just zoom past, straight to the front of the line.

At the first control post we handed in our passports and they were given back in a few seconds. Keep on going we were told. A little further, past some more trucks, we came to the second control booth. The process was repeated, and it might have taken 2 minutes before we were given our passports back, with exit stamp. It seems they are looking for the little visa stickers inside the passport, but we have a stamped visa, which seems unusual and they have to look for it.

Next under the enormous covered area was customs. We drove on and again we needed to hand over our passport. Just one this time, Jon’s as his has the entry stamp of the car in it. He even knew Jon’s name before I gave the passport so he must have typed in the licence plate number into the computer. He just looked for the name and when it was the one he was expecting, gave the passport straight back. No stamps, nothing.

A third booth, after passing more trucks, checked our exit stamps in the passport and waved us through after a few seconds. Wow, this had taken 6 minutes and we were out of Turkey, into Greece no-men’s land. We hadn’t even left the car!

It seemed we drove over a bridge although we couldn’t see the water beneath us because it was dark. No-men’s land was not very big, but yet again we passed many trucks, all waiting in line to get into Greece, and into the European Union perhaps?

The same system on the Greek side, where everybody stays in their cars and you just drive from one booth to the next. Greece only had 2 stopping stations. The first wanted our passports, and as they are EU passports we didn’t even get a stamp.

The next stop was customs and we expected him to want to see the inside of the car or at least the registration papers or green card. But he just wanted to see the passports again and that was it. We were waved through and without a final check we were now in Greece. We had reached Europe and it had taken us a total of 10 minutes without leaving the car! Amazing, our fastest border crossing yet. I guess we ‘saved’ ourselves 10 minutes driving time… 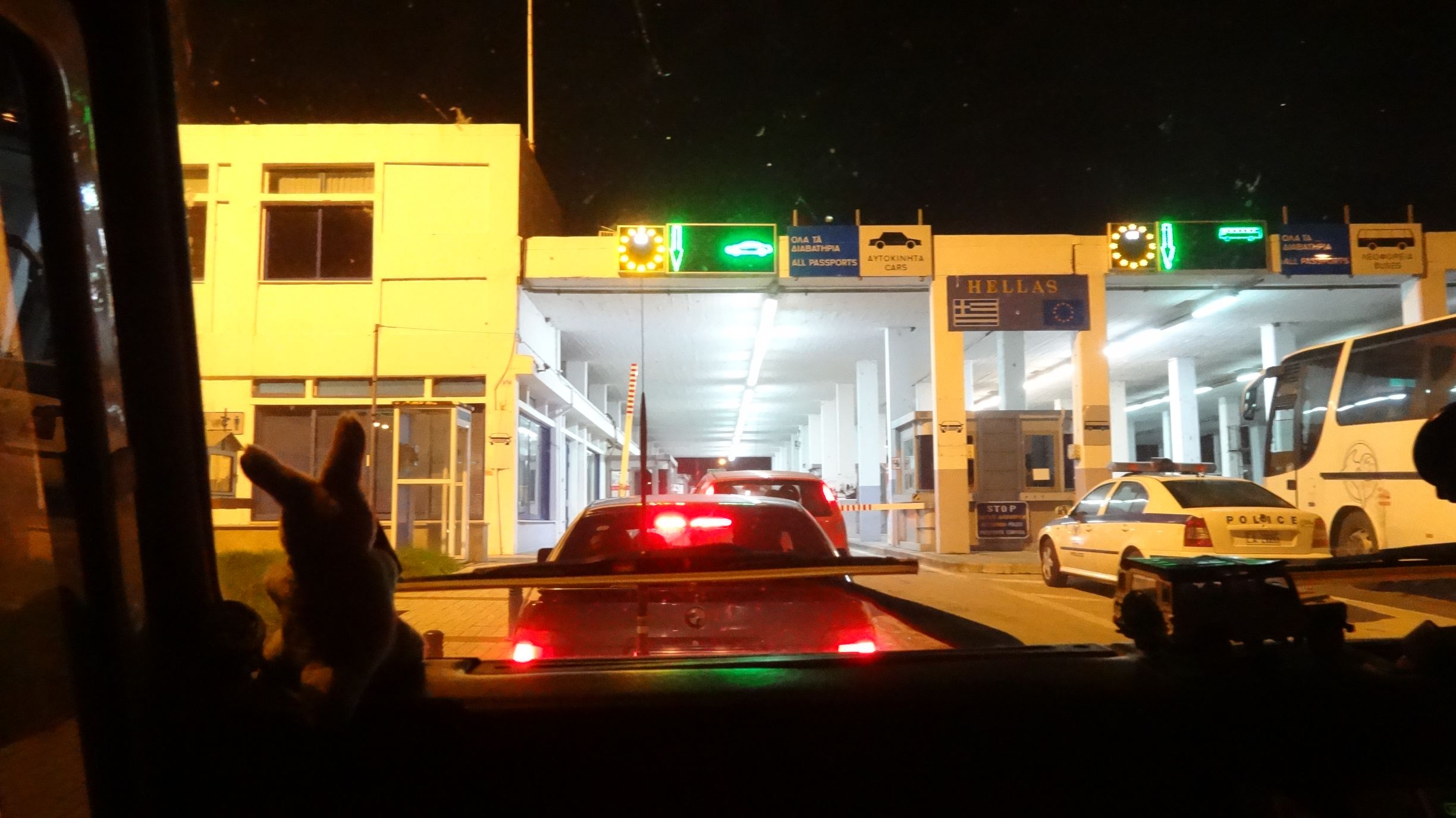 crossing into the European Union at last (border Turkey with Greece)

Another efficient drive through border. And we’re lucky there is only one car in front of us. It doesn’t seem to be a busy border. No lines of trucks here either.

The first booth is for our passports and, as we both have a European passport, we get them back quickly without any stamps. The window is on the left, but as we are with two in the car we don’t have to get out to hand over our passports.

The next booth is customs. We get out and walk to the window where they want to see the car registration paper and the passport with the same name. We hand them over and they seem a bit confused. But when we tell them the registration papers are from Australia they seem happy, hand it all back and we’re free to go. They don’t even look at the car.

Not much further we arrive at the Albanian border post. We do drive past a duty free diesel pump, but this is only for trucks and buses.

The Albanian booth is again on the left, and we hand over our passports. The only question is if this is our first time to Albania. Not much later we have another stamp in our passport.

When we ask where customs is, they say that was customs too. One of the man in the booth was customs, the other immigration. We’re done. They didn’t even want to see the registration papers or the green card.

There are some shops past the immigration booth but we drive on, straight into Albania. There is another gate with a control booth, but the gate is open and there is nobody there. Easy. This might have been even faster than the border crossing from Turkey into Greece. All up it was just under 10 minutes, for both borders!

We arrived at the border crossing quite unexpectantly and, similar to previous borders in this area, we joined the queue for a drive-through border crossing.

They disappear with our paperwork and let us wait. After 10 minutes we are told to move to the next window and we wait again. They indicate we can park the car a little further, but we remain where we are as currently we are blocking any other cars from being allowed through. A good way to make sure they deal with us first.

After 5 minutes they ask for a driver’s licence so we hand over our international licence.

Another 10 minutes pass, we are reading our books so we don’t mind, when we are handed back our paperwork. First check of our passport shows there is no exit stamp, so we stay where we are and ask for it.

Just as we’re about to leave they want to look under the bonnet. Just satisfying their own curiosity as not a single look is cast inside the car.

Half an hour after arriving at the border we’re driving into Montenegro.

There was a sign 200m before the border to announce we were there, so we were a bit unprepared. We got our passports out and handed them over to the officer who was sitting, strangely, on the right hand side in another drive-through booth. It seems a bit illogical to have the officer on the right hand side when drivers here are all on the left. Maybe they prefer them to get out, but as there was nobody in front of us we couldn’t see what they normally do.

The officer asked for our car registration paper and green card as well. We hand them over and not long after we get everything back after he gives us our exit stamp. When we entered Montenegro we had to specifically ask for our entry stamp and they seem to give us an exit stamp without asking for it, so we’re now not sure but it seems we did the right thing by asking for one when we entered.

After a short windy road through no-men’s land, littered with closed duty free shops, we arrive at the Croatian border post. It is a lot more professionally set up and when we enter we notice a sign: built with European Union money. Later that day we find out Croatia has joined the European Union on 1 July this year (2013), so that might explain it.

Again it is a drive through border, you can tell the majority of people crossing do so by car here. There is one booth, on the left, and the officer asks for our passports, car registration paper and green card. He asks about the originals of both, but when we tell him that’s all we have as they have been printed after receiving them by email he seems, begrudgingly, happy. He also asks about having an Australian registered car and us traveling on UK and NL passports (for obvious reasons Jon is now using his UK passport), but when we tell him that we live in Australia he seems satisfied.

We get everything back after a few minutes, no stamps for us as Croatia is part of the EU. That took only 10-15 minutes to cross both sides of the border. The most surprising thing is they don’t even look in the car, not at the Montenegro side, nor on the Croatian side. We’ve entered the EU without them even looking inside.

It’s a modern, well-organised drive-through border where both countries have a booth right next to each other to make it easier. When we arrive from Croatia the second booth of Bosnia-Herzegovina is empty, so we only show our passports to the Croatian immigration officer.

He doesn’t ask to see any of our car papers and as we are driving with European passports we get them back after a few seconds. No car check, so after only a minute or so we’re now in Bosnia-Herzegovina.

Only 10 km after driving into Bosnia-Herzegovina we leave the country again. Similar to the border post entering the country, this border crossing is very modern and again a drive-through.

This time we face the officer from Bosnia-Herzegovina first. He checks our passports and we get them back almost immediately. Next was the booth for Croatia again. He looked at our passports briefly, asked if we had anything to declare, alcohol. And when we said no he immediately waved us through. This time some customs officers were working, they checked the 2 cars in front of us. One was a German campervan and the other a Croatian sedan. They didn’t want us to stop and we drove straight through. Back in Croatia again. As there were 2 cars in front of us when we crossed it might have taken us 3 minutes.