Most people just buy drawer runners, build their drawers from wood, aluminium, or another lightweight material, and that’s it. Job done.

We have to try to keep weight to a minimum wherever we can, and it is surprisingly heavy to add runners for each drawer and build them out of plywood, even if we are using lightweight plywood.

So we had to come up with a different solution. And we settled on baskets in plastic runners.

Will they be strong enough? Who knows. Will they be easy to use? Most definitely. Was it quicker to go this way? Possibly not…..

We initially bought aluminium u-channel and put felt inside to keep the baskets running smoothly. It worked well, but, when you pulled the baskets out, they could every so slightly dip because there was a few mm of play in the aluminium channels. This meant that they were scraping over the edges of the aluminium, and of course the felt won’t cover that very edge. 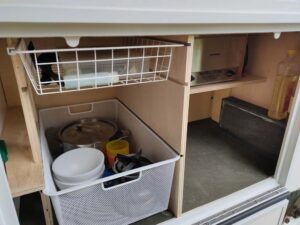 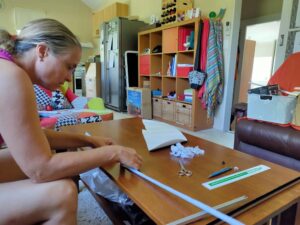 Roland mentioned a plastic he had used in his caravan when he built his own outdoor kitchen. It is known for its non-friction qualities. Ideal for making runners. We sourced some at a small factory in Brisbane and ordered a small quantity to trial it.

We cut it to size (it had to be exact to fit the grooves we had already cut into the plywood) and then routed out a smaller channel in the middle along the length. It seemed to work, but it required a very, very precise fit. Both into the already cut-out channels, as well as the for the sides of the baskets.

The reason it had to be such a precise fit into the wood was that this non-friction plastic can’t be glued into place. There just isn’t any glue that can be used on it. We initially thought we would drill a screw through the end part and left a small bit at the end uncut for this purpose. But, as we were doing our trials, we realised if we could get it to really, really fit exactly into these grooves we had, it would just stay in there. Like magic.

We remembered John C talking up his precision router and decided to ask him for some help on this. So one day we drove over in Lara with a new supply of uncut plastic and he very kindly helped us out. Again we did some trial runs with his precision router and decided we needed to buy a 4mm router bit for the baskets to fit in snugly. Celia drove with Jude to the nearby Bunnings and upon return we started the real job. 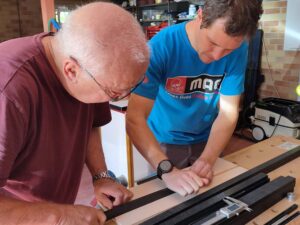 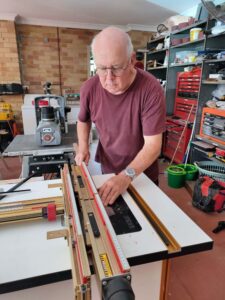 John C with the precision router

After a lengthy process of working out the exact requirements for each bit of plastic, we finally managed to get a bit of a production line going. With the three of us working the router, the planer and test fitting each piece we got there in the end. We now had some runners for our drawers (the baskets). 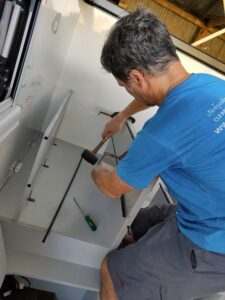 We still had to trim off the small amount of excess plastic at the front of each runner, but that was a job we could do at home. 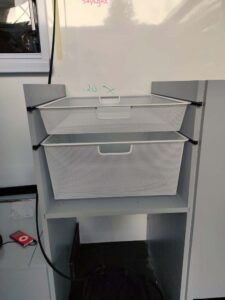 the first drawers with their plastic runners

The baskets we are using are Elfa baskets. They are supposed to be sturdy enough to withstand corrugations. I guess time will tell….

We were lucky as the drawers fitted into our dimensions perfectly (or we could of course claim that we designed it that way!). They only come in two sizes (front to back), have three options for depth (top to bottom) and most come in a wire or mesh option. Unfortunately the smaller ones don’t have the mesh option, but we will somehow line the wire baskets so we can put smaller items in them as well without things falling out. We only needed three wire baskets in the end. The other 10 baskets are all made of mesh.

But drawers need a front, as well as a latch as otherwise they just start flying open when driving and that wouldn’t be good. As mentioned when we showed you how we made the cabinets we had already tested the concept for the drawer fronts, but we hadn’t done anything about them since that initial trial. We wanted to add a wooden front so we could cut a hole for the latches we bought. We had seen them on pictures and they were exactly what we wanted. A latch that didn’t protrude (as our space is so small, we didn’t want to bump into latches or handles that stick out), would open in one smooth pull and when you closed them, they have to immediately lock into position. We didn’t want to have to press something or do something else to lock it (as we would surely forget). 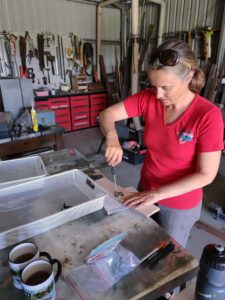 Jude adding the first latch to a test drawer front 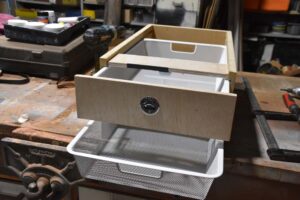 our test set up – it works

When doing the initial searches we found loads on ebay, Alibaba and amazon, but none in Australia. The hardest part was knowing for sure what the size was as we wanted small ones. The majority were huge. Luckily Mark had already bought the exact latches we wanted and he shared his link on AliExpress. Knowing for sure they were selling the small ones made it an easy purchase. They have been sitting under our coffee table (which we are using as a storage place) for many, many months now. But finally, last weekend, the bag was taken to the workshop and one by one, each drawer front was given a latch (and the accompanying catch).

Jon did all the work on the drawer fronts. He cut them to size. Routed out the groove where the basket would slide in. Cut out the holes for the latches, measured exactly where the catches needed to be, and then added all the brackets (and nut inserts) to attach the wooden drawer fronts to the metal baskets. 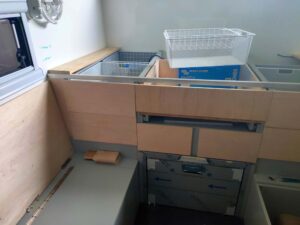 finally the drawers (baskets) are getting their fronts on, ready for their latches and catches 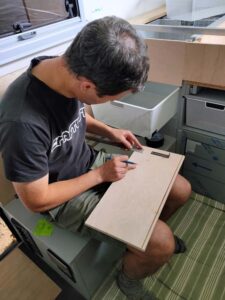 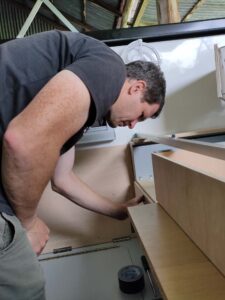 Jon taking more measurements – it is precision work and Jon did all of it, amazing 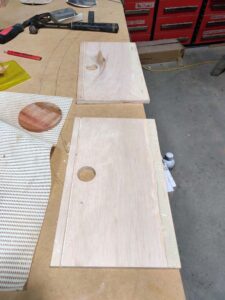 sometimes we get it wrong, but luckily this is the back of the drawer front so we used wood filler to hide our mistake – nobody will every know!

Once the fronts are painted, we will attach the brackets to the baskets with super strong fishing line. We’ll let you know how well that works once we are on our way! 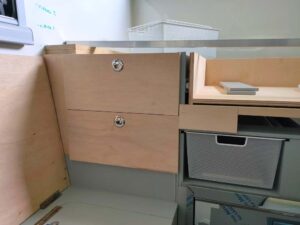 more drawers now complete (although the top one still needs its catch as that will need to be attached somehow to the bed frame….)

We now have eight basket drawers with plywood fronts, three basket drawers without any fronts (in the kitchen box) and we actually did make one drawer out of plywood, with standard runners. We wanted to mount a powerboard inside that drawer so we could charge our laptops and phone inside it. Out of sight basically. To do that we needed a drawer made of wood. Jon made that one too after watching a few YouTube videos on how to make strong drawers, it has several grooves routed out so things slot into place perfectly. Super impressive.

And this is the result, doesn’t it look amazing?

Of course we now need to do a lot more painting, but for now we are very happy with how it looks. What do you reckon? 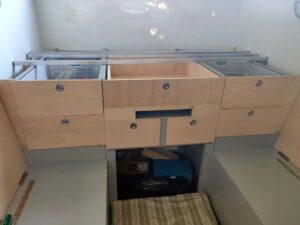 the finished result – now they just need a coat of paint…