Double farewell trip to the Tip

We decided that before selling Lara, and before leaving the country we wanted to do one final trip, a last (for now) holiday in Oz. And, when you live in Queensland, what better trip to do than Cape York? It’s on the list of many enthusiast 4WD-ers and many plan this iconic drive ‘up north’ for years before finally tackling the long kilometers to ‘the Tip of Australia’.

It’s a long way from Brisbane to the Tip – 2647km to be exact – but we were lucky to break up the journey north catching up with friends. First up were Jan and Jeanet. They were returning from their Cape York trip and were full of tips and recommendations. Places and creeks that didn’t ring any bells yet were scribbled down and many questions asked (and answered). We shared a fantastic first campsite with a lovely fire right next to the beach – the first of many. 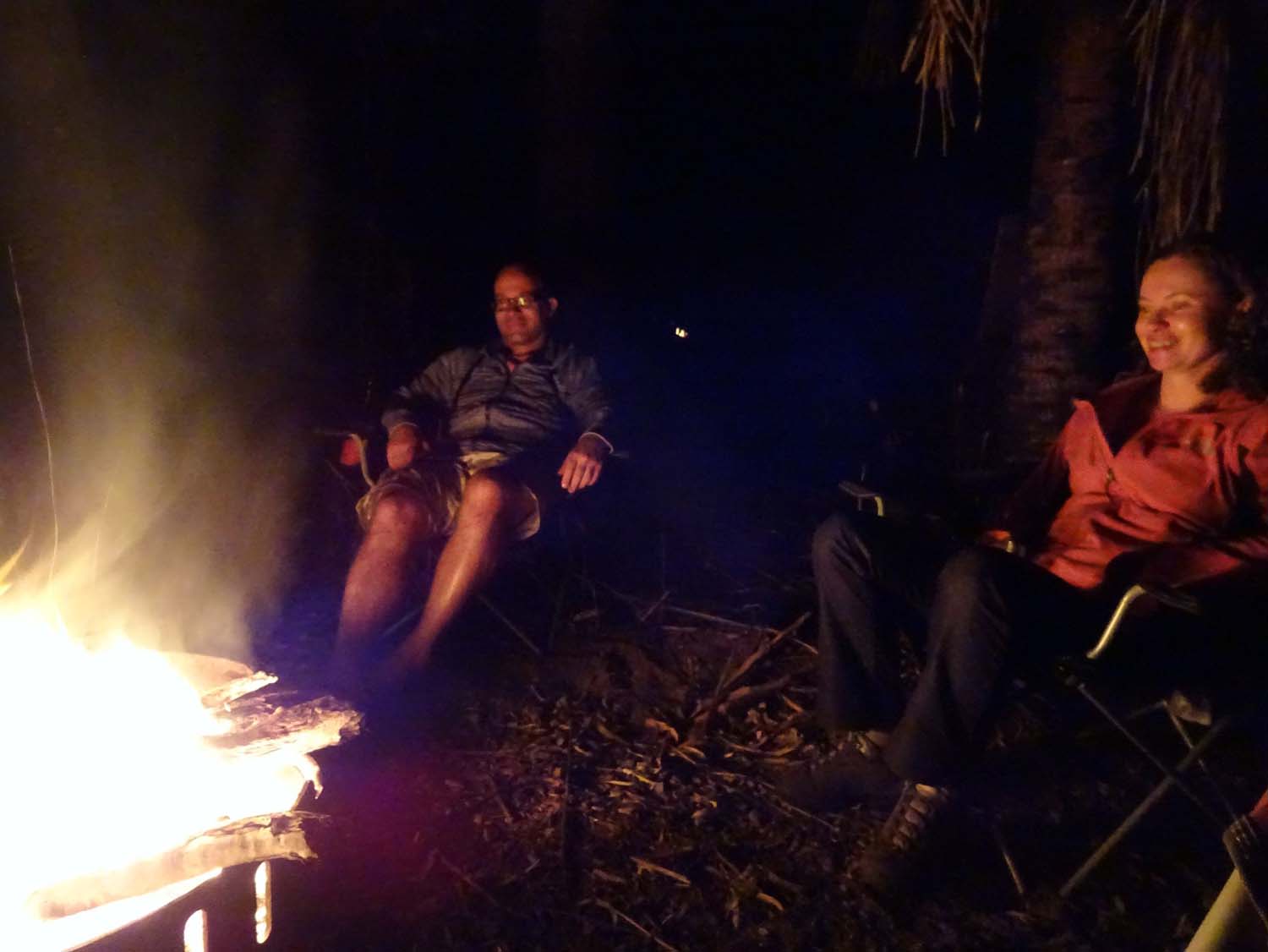 The next day we caught up with Darren, Kirsty and Maya in Gladstone. Isabel was asleep so we’ll have to meet her next time. Unfortunately we only had time for a short stop, but we’d see them again on the way down so a quick catch up after three years was a good start. 24 hours later we were in Townsville where Jason was visiting family and friends for another quick ‘coffee stop’ on the Strand. We made time for a quick stroll along the Strand and a drive up Castle Hill for some good views. 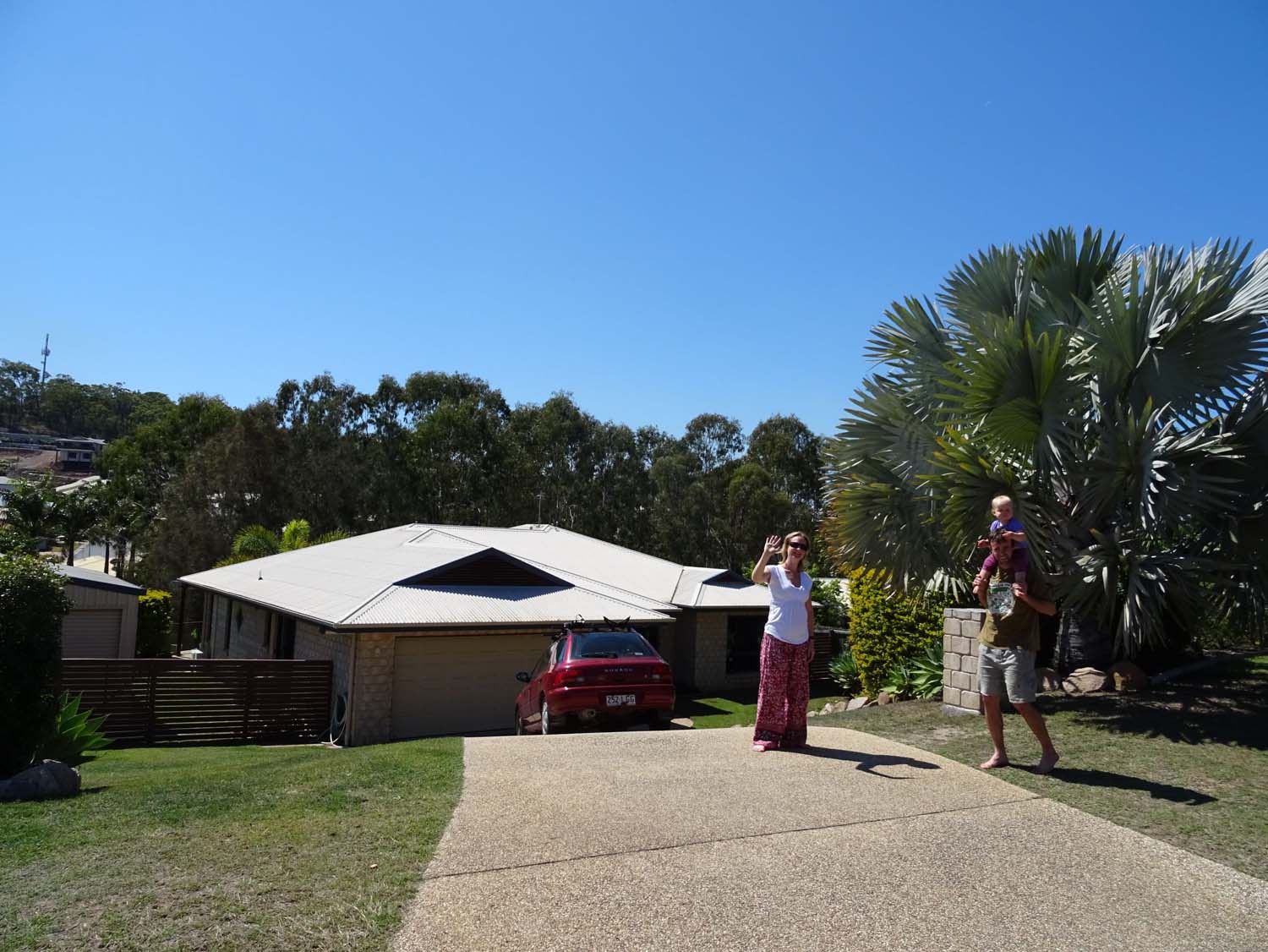 short and long catch up with Darren, Kirsty, Maya and Isabel in Gladstone 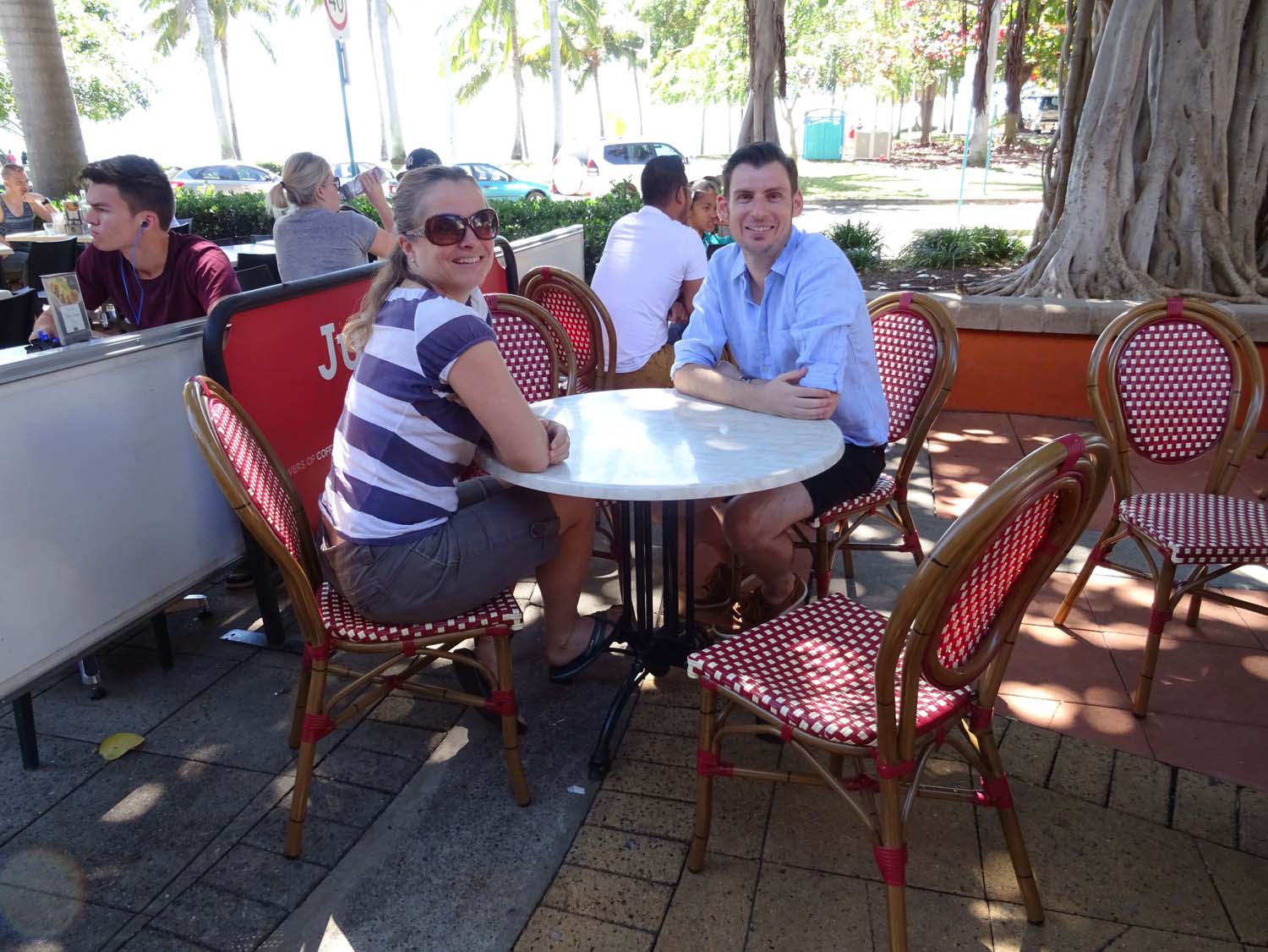 catch up with Jason in Townsville

Our destination for the night was Bartle Frere, which at 1622m is the highest mountain in Queensland and conveniently located only 8km off the Bruce Highway. Of course we had to hike to the top, an estimated 10-12 hour hike. Most people spend the night at the top, but we didn’t bring our hiking tent. It’s a great way to break up the long drive to the Tip, as we’d just spent more than 2 days in the car and had many hours driving still to come, only occasionally interrupted for a short boardwalk or beach walk, lunch on the beach or a paddle with our trusty kayak off Cape Tribulation. 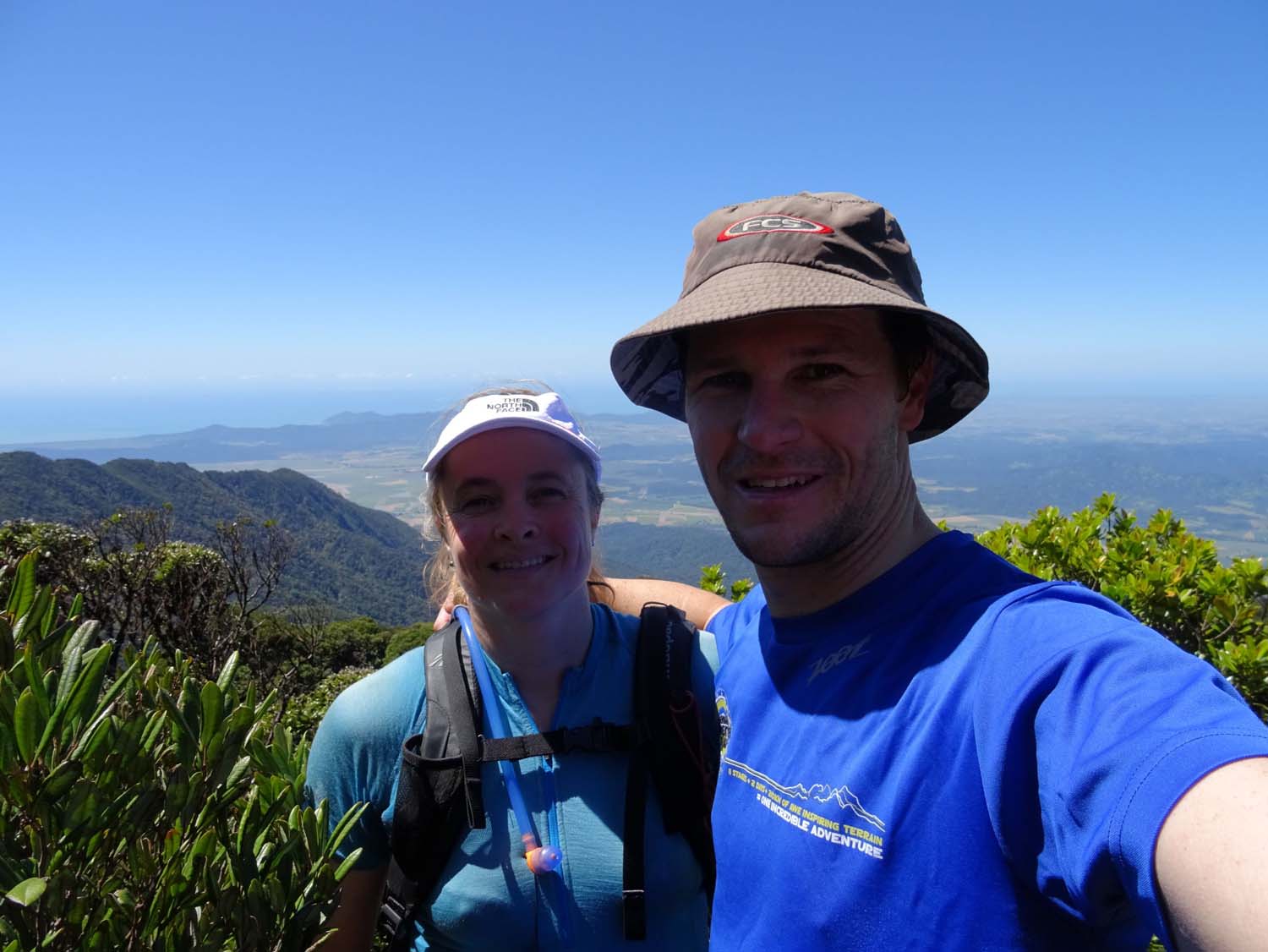 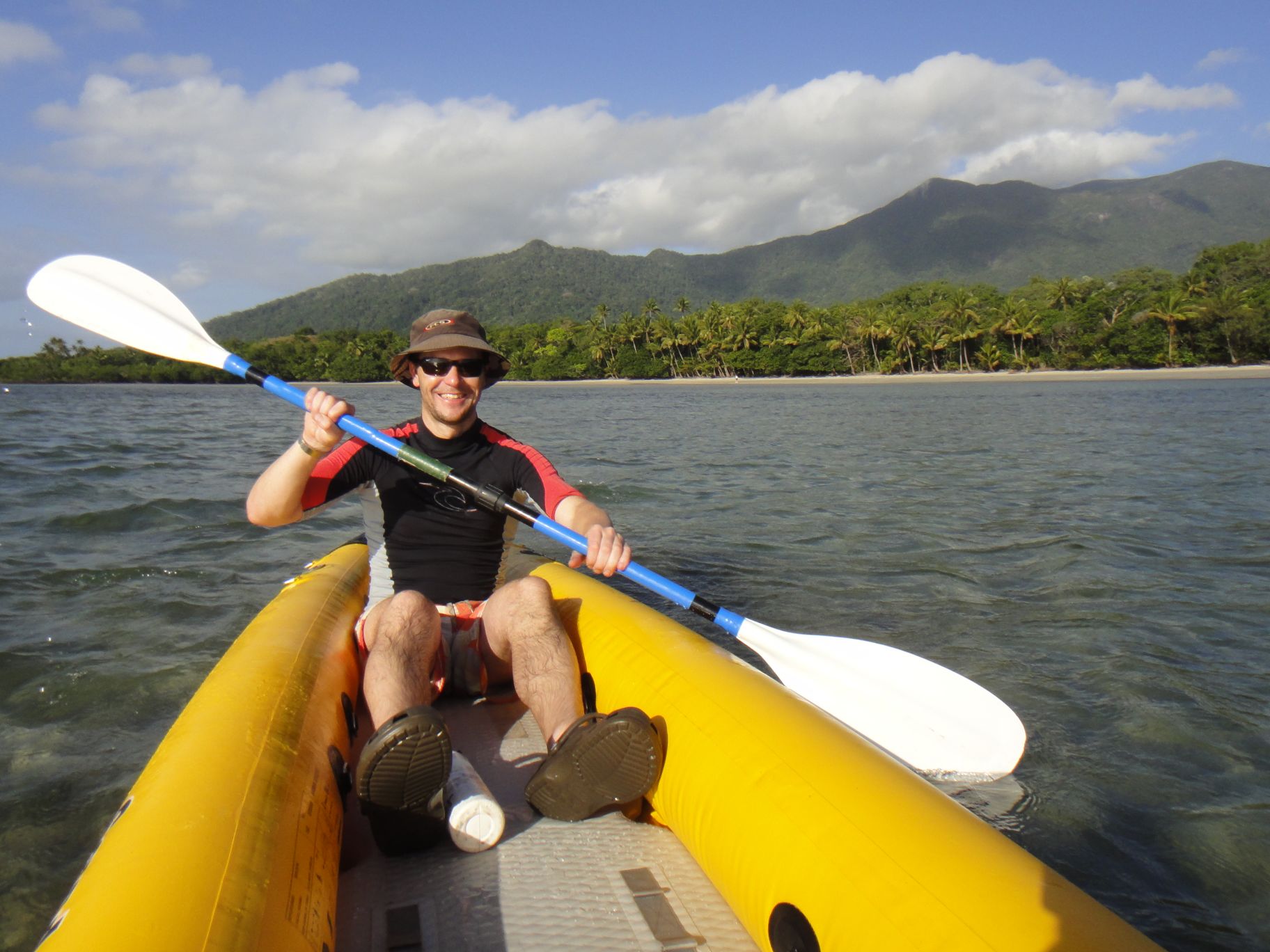 After the Daintree NP we hop on our first 4WD track – the Bloomfield Track. An easy track with some very steep climbs over the various mountain ranges it crosses. We spot our first big saltwater croc, visit the very impressive Bloomfield Falls and have a drink at Queensland’s oldest pub, the Lion’s Den. 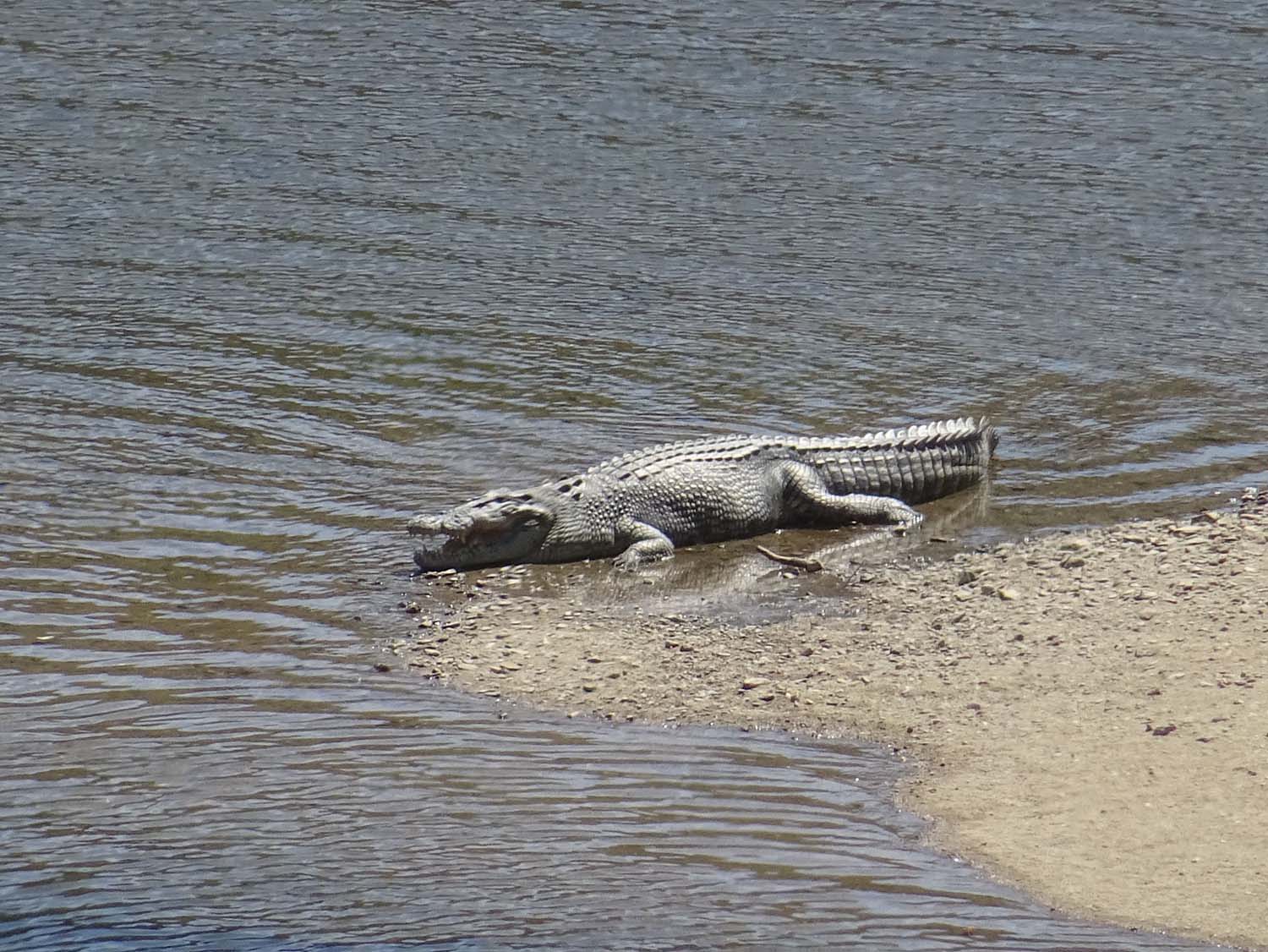 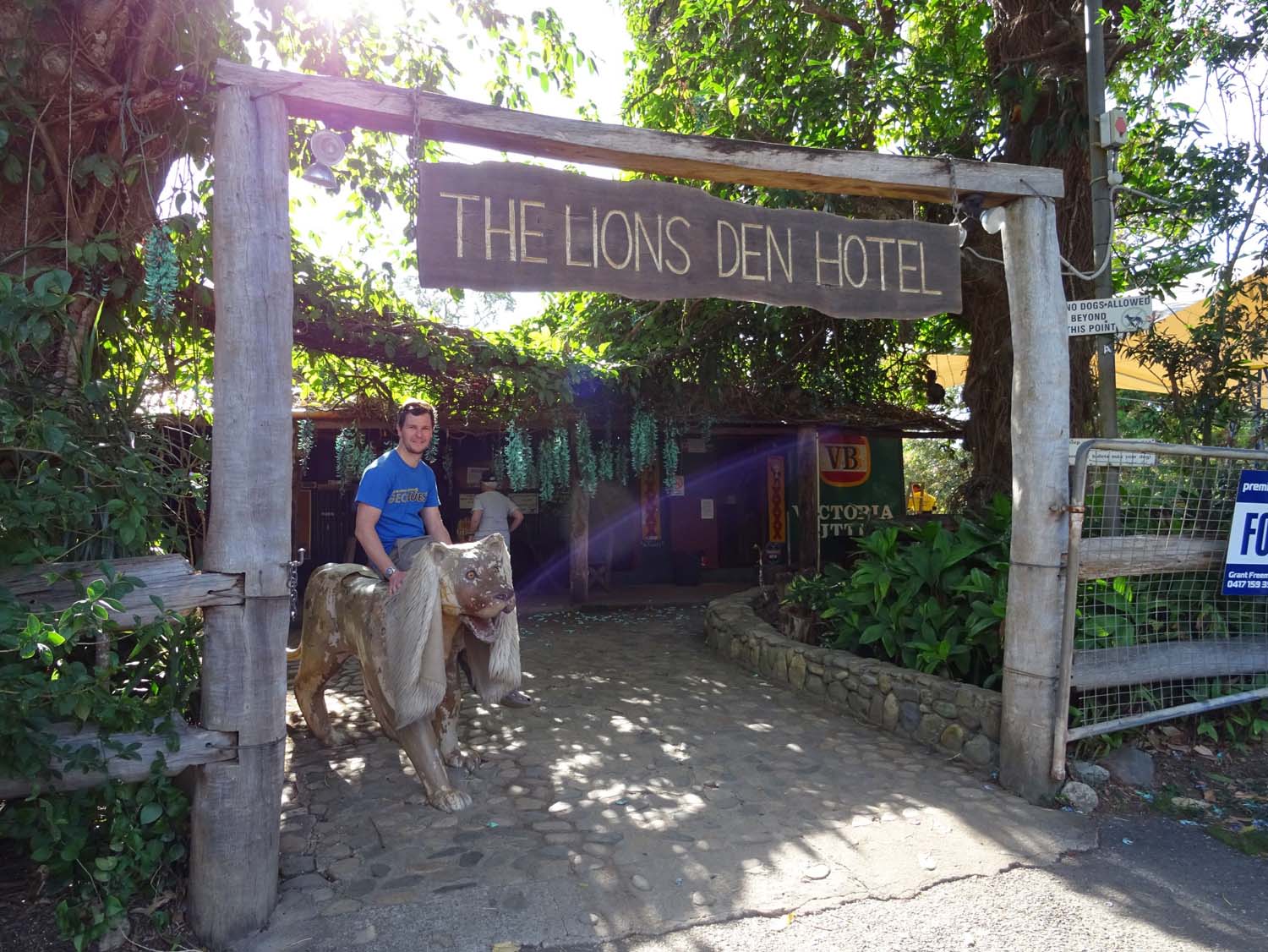 We manage to find a beautiful campsite on a working station near Hope Vale so we can join the very informative and entertaining aboriginal art tour from Willy Gordon the next morning. Willy is quite a character and we were lucky to hear his stories first hand as soon he’ll hang up his hat and pass his story on to the next generation. That night we sleep at another perfect bush camp – Hann’s Crossing in Lakefield NP. It’s just us and the local croc hanging out by the river. Whilst we enjoy a good red and hang out by the fire beneath an almost full moon, the croc cruises up and down the river, occasionally splashing around when he catches another fish. 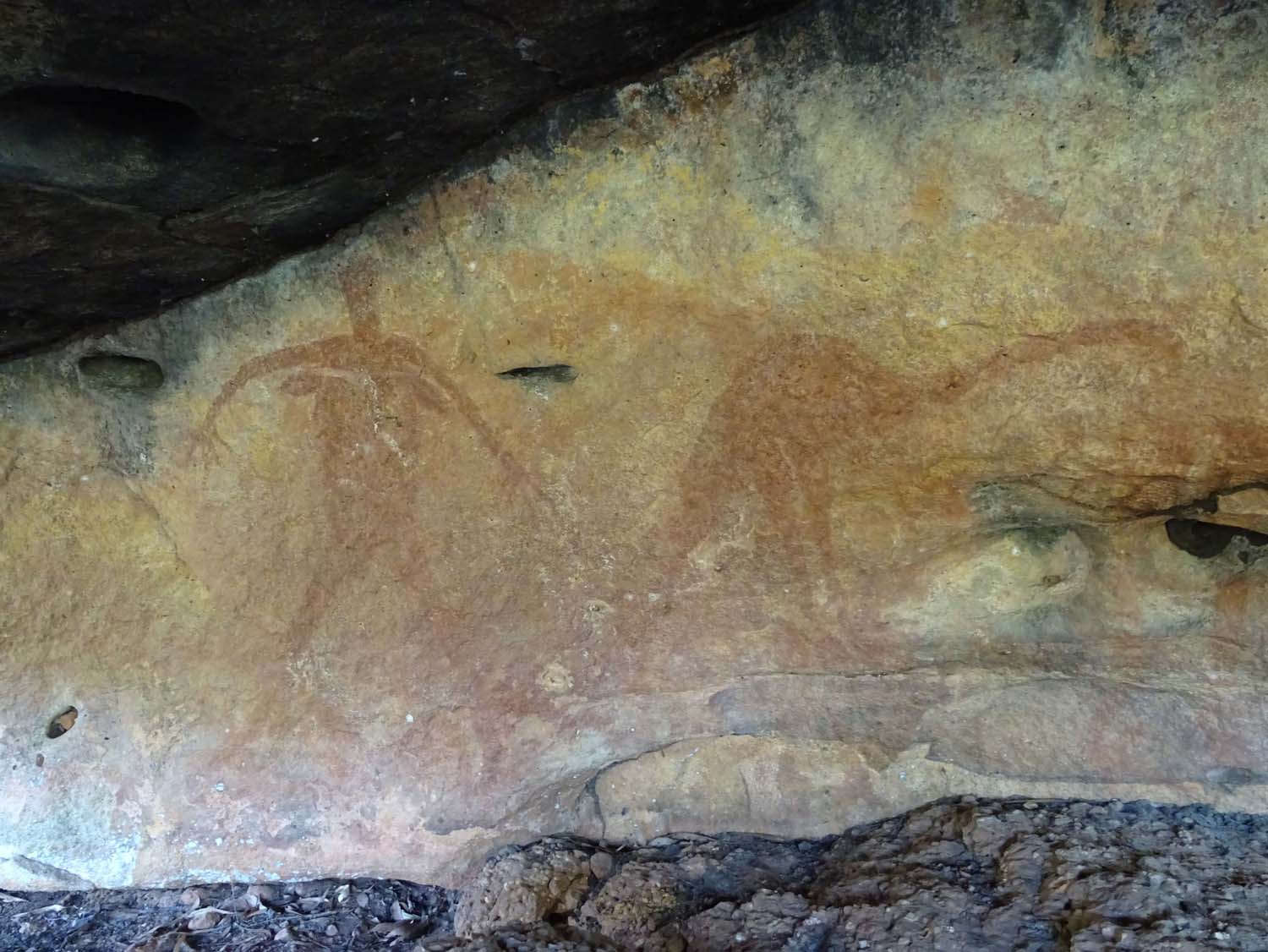 As we’ve heard good things about the Frenchman’s Track, we drive to Chilli Beach enjoying the many animals, birds and termite mounds on our drive out of Lakefield NP. Pretty Chilli Beach is rather smelly, windy, rainy and cold, but when we go for a walk at night we manage to spot a huge Tawny Frogmouth Owl and a few native rats. And thanks to the tips of Jan and Jeanet we are at least sheltered from the wind so we can enjoy another fire and some G&Ts this time. 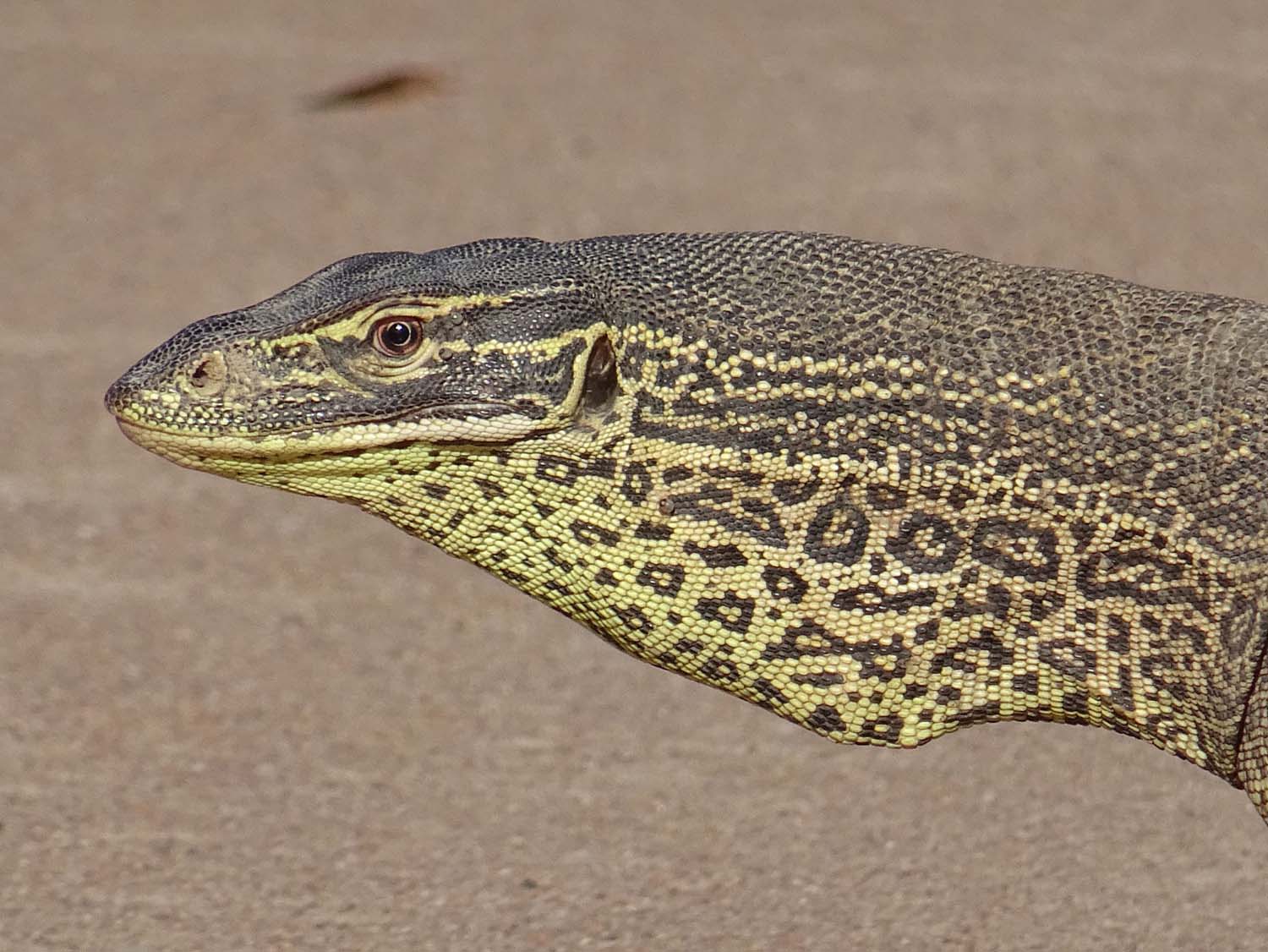 Frenchman’s Track was fun and starts well with the crossing of the Pascoe River. We take our time scouting the entry and exit, bumping into 3 quad-bike riders from Weipa and just as we are about to cross 2 more vehicles turn up: our neighbours from Chilli Beach.

The crossing was deep with a few hidden rocks and plenty of boulders on the way out too. But Lara showed us how capable she is and cruised easily through and out. We did get a bit of water in the cab though! The rest of the Frenchman’s track was easy and we enjoyed the occasional creek crossing, sandy patch, gutted tracks and boulders along the way.

The Frenchman’s Track ends on the PDR – the Peninsula Development Road. We were going to see a bit of the PDR later on, including some of its horrid corrugations, but for now we just had 2km to drive on it before turning off to Weipa. Many times on our trip we told each other how happy we were that Lara was booked on the barge back from The Tip to Cairns, so we wouldn’t have to drive this car-wrecking PDR all the way back. The little bits we saw of it on the way up were enough!

Weipa sits on the west coast of Cape York and with the huge Gulf of Carpentaria in between it and Arnhemland in the Northern Territory we enjoyed something we hadn’t seen for a long time in Oz – a sunset over the ocean. Mother Nature put on a stunning show just for us as we were the only ones camped at the edge of the beach near the Pennefather River. 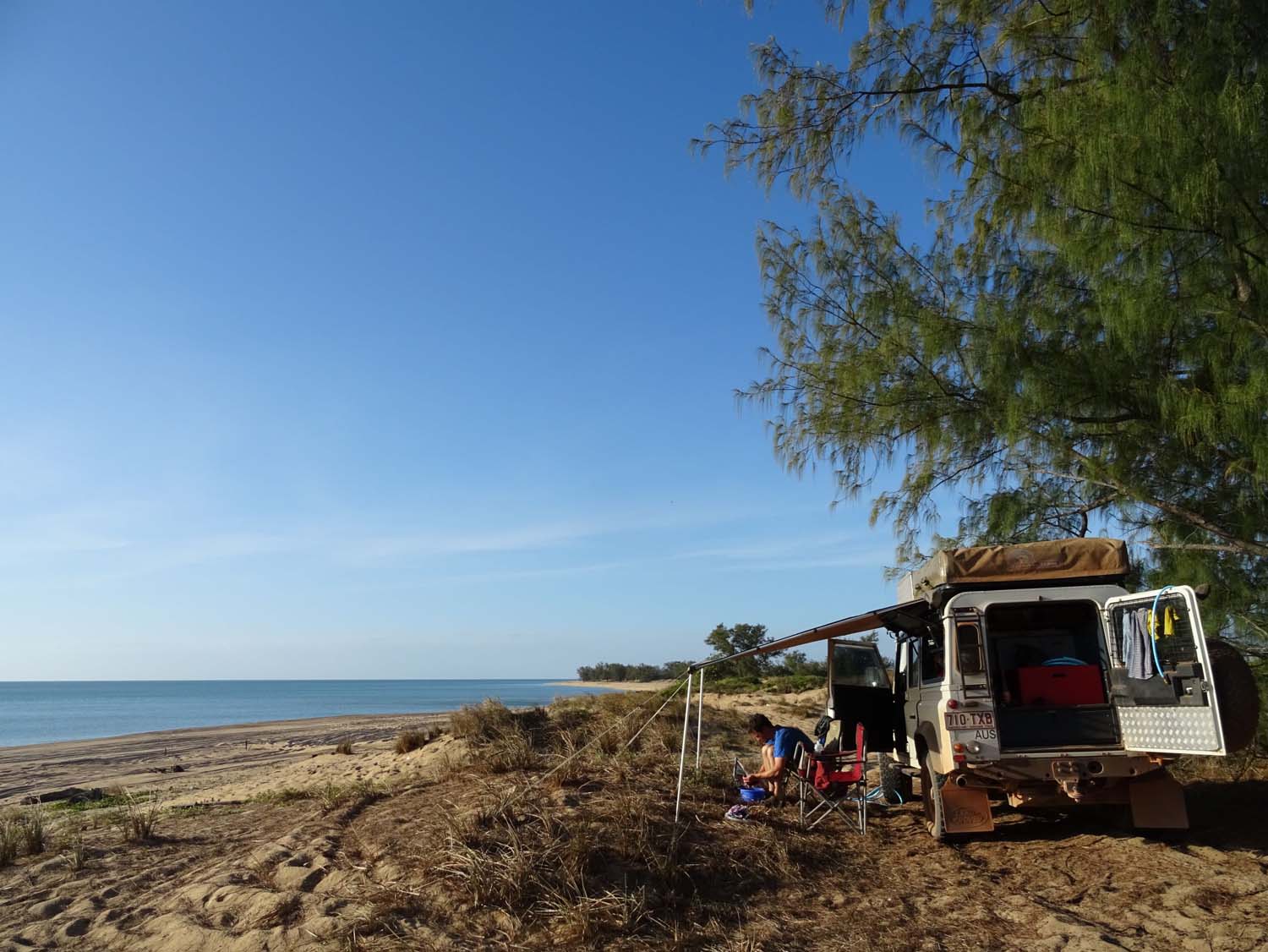 On day 10 we finally make it to the start of the Old Telegraph Track (OTT) at Bramwell Junction where we try to get our tyre swapped after an earlier puncture. No such luck. They can’t break the bead with their hand tools and we decide to plug it ourselves and not put the brand new spare tyre on the rim. After pumping it up to the right pressure it seems to hold so we set off on the actual OTT with fingers and toes crossed for not too many flats along the way! 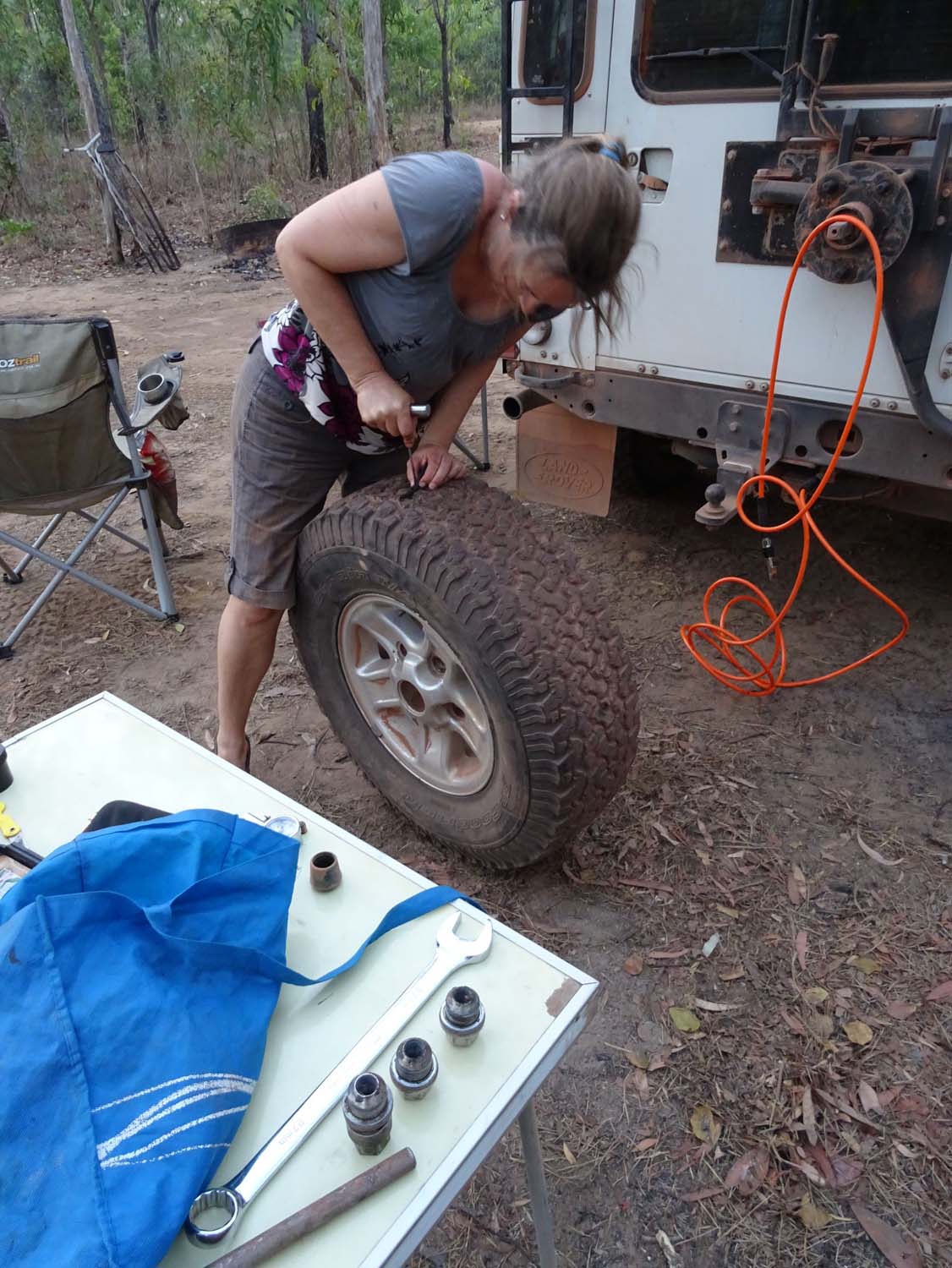 plugging our first puncture ever with these tyres

After only 4km we come to the first creek crossing – Palm Creek. This one is almost dry, but deep with a daunting exit climb where we are supposed to winch ourselves out. With nobody else to be seen we opt for the chicken route – the first of many – and drive down the steep entry to the right. Lara seems to laugh at us as she easily drives straight out. One creek down, quite a few still to follow. 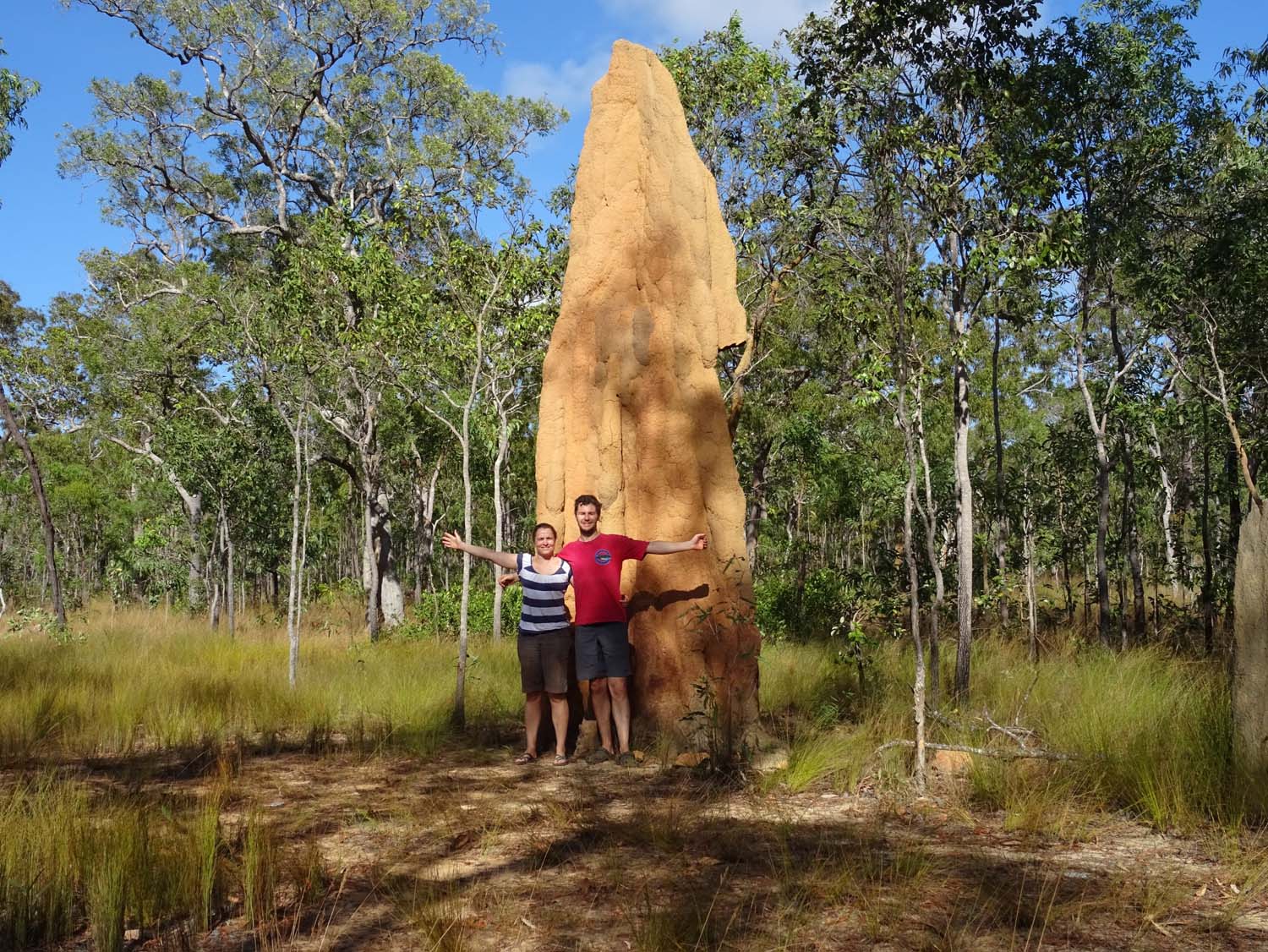 they have some huge termite mounds here 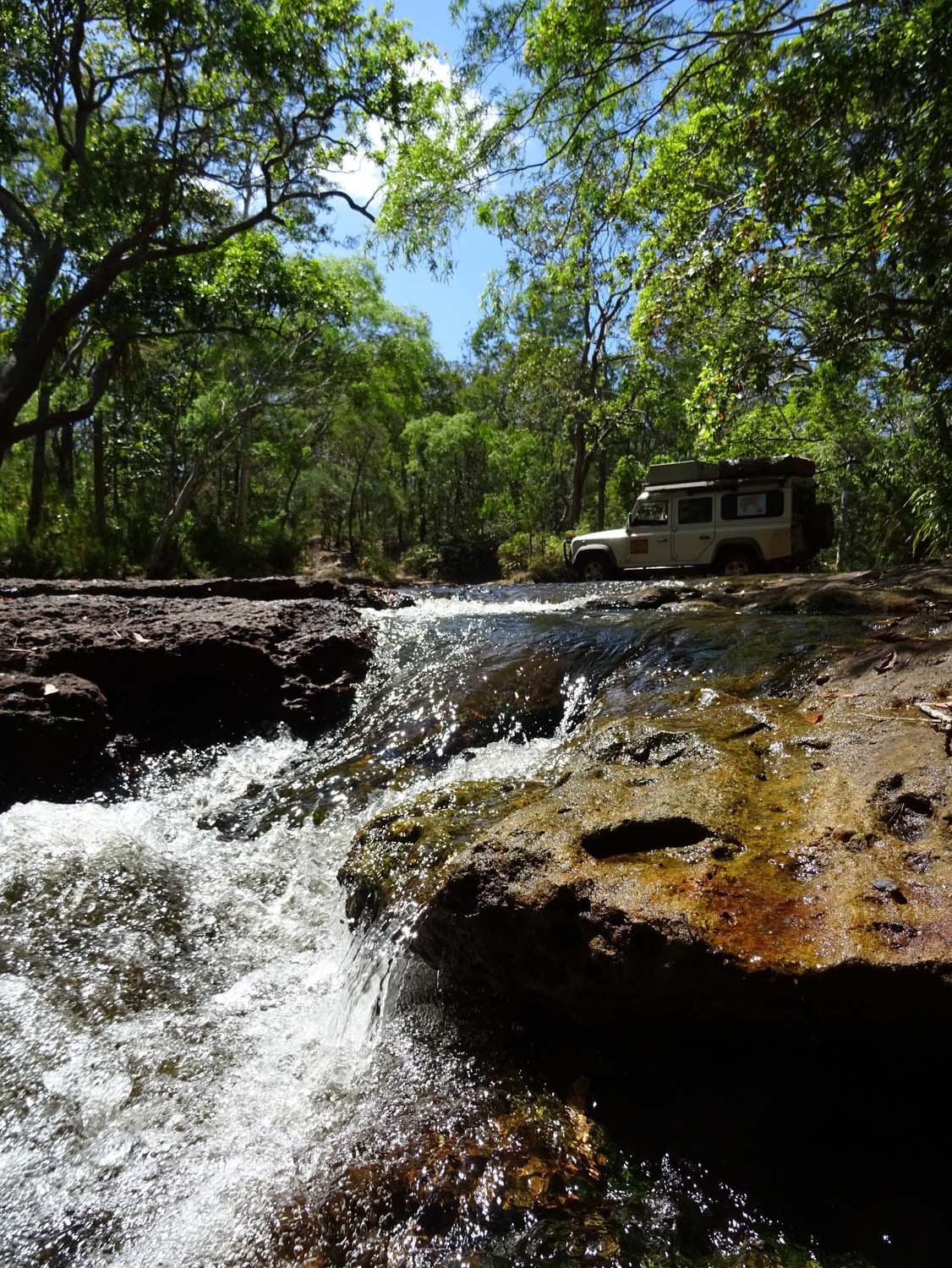 crossing one of many stunning creeks on the Old Telegraph Track

There are about 15 creek crossing along the OTT, and one of the most notorious is Gunshot with its almost vertical entry. Luckily it has another option for those who would like to keep their cars in one piece. Last up was Nolan’s Creek – the deepest of the lot – the level was ‘only’ up to the headlights. Lara did really well, not hesitating once, even though we had a few shaking hands and sweaty palms at times. We’re definitely gonna miss her! 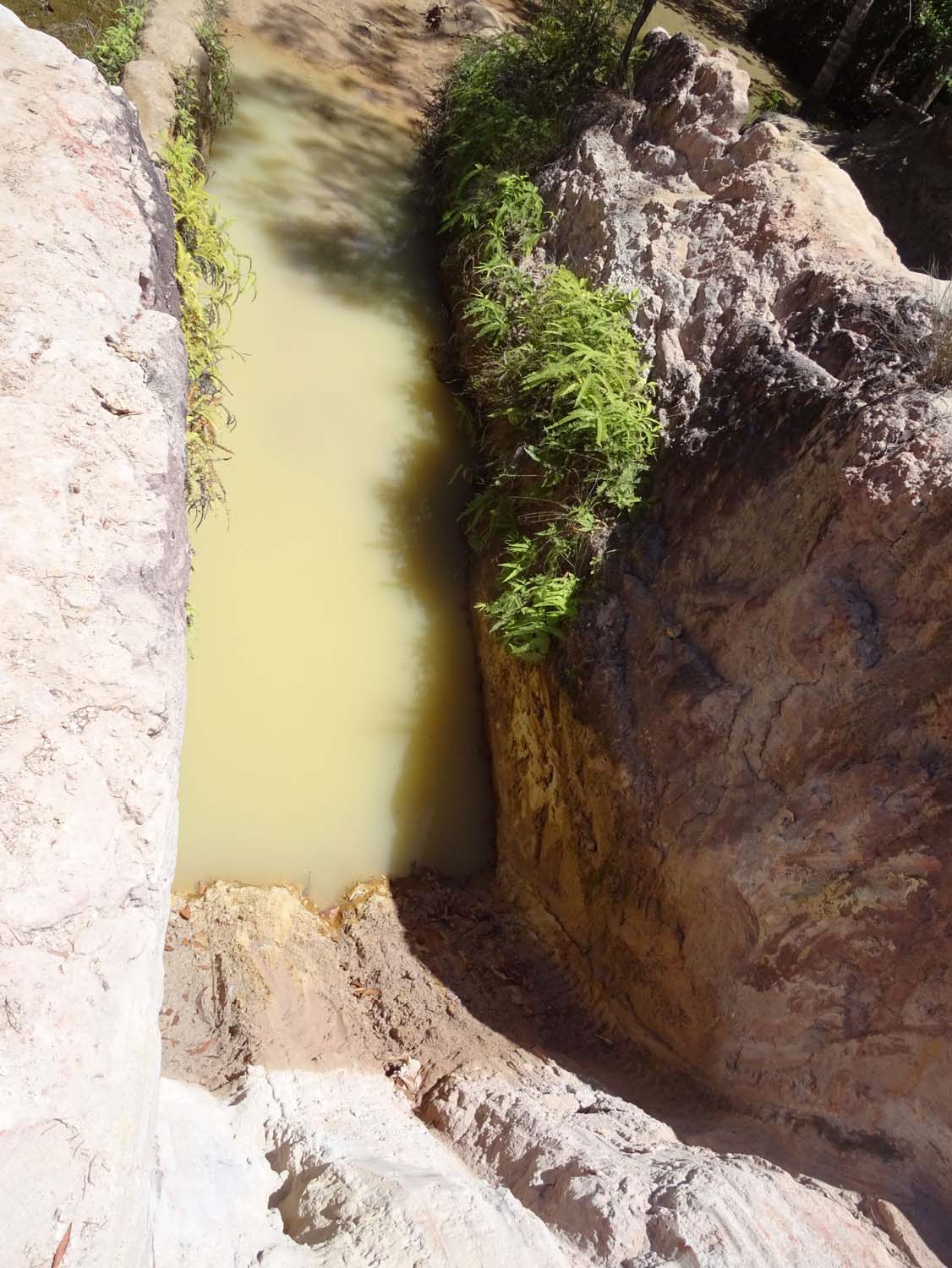 entry to Gunshot Creek if you are game 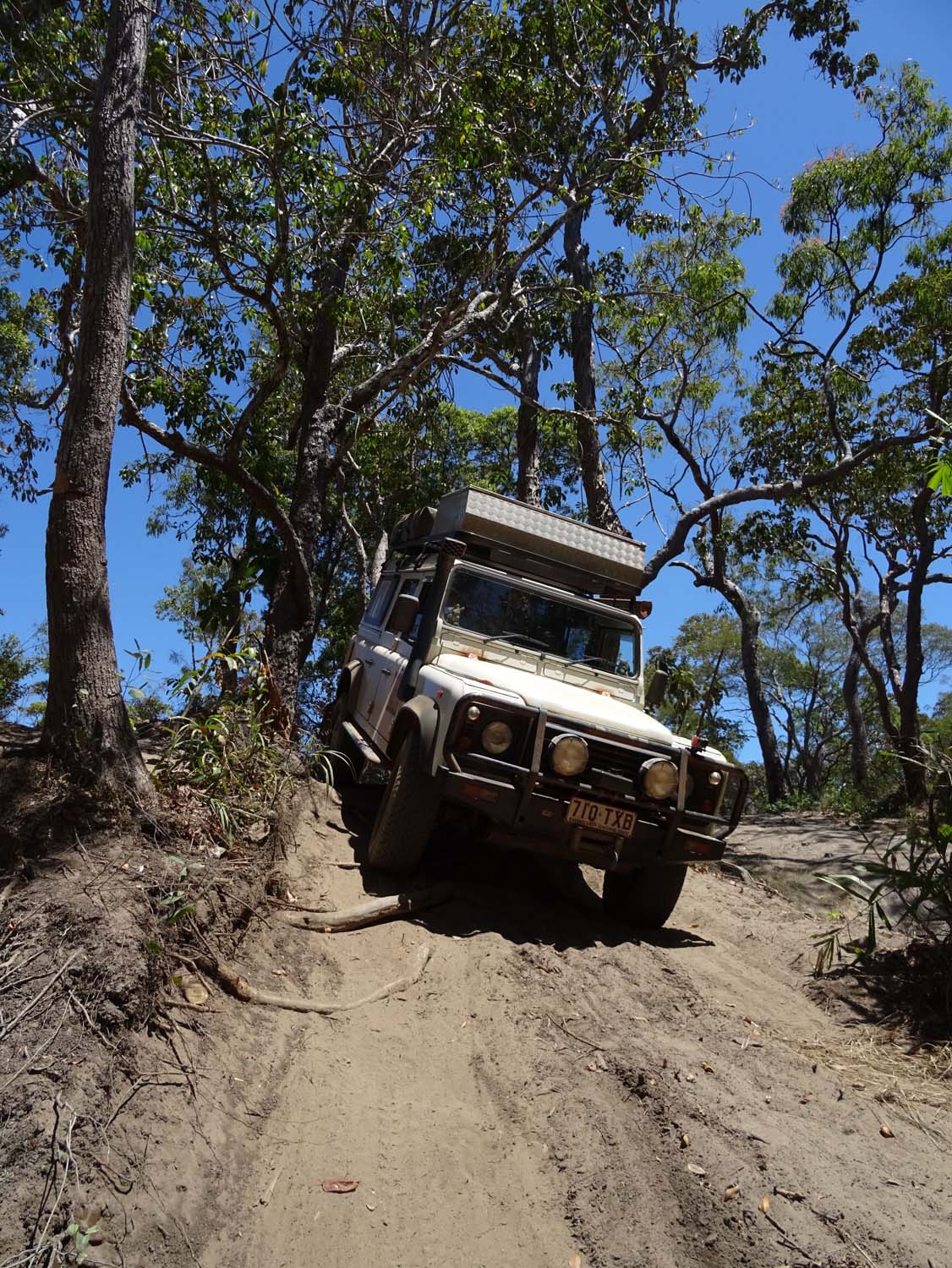 the not so gnarly entry option at Gunshot Creek 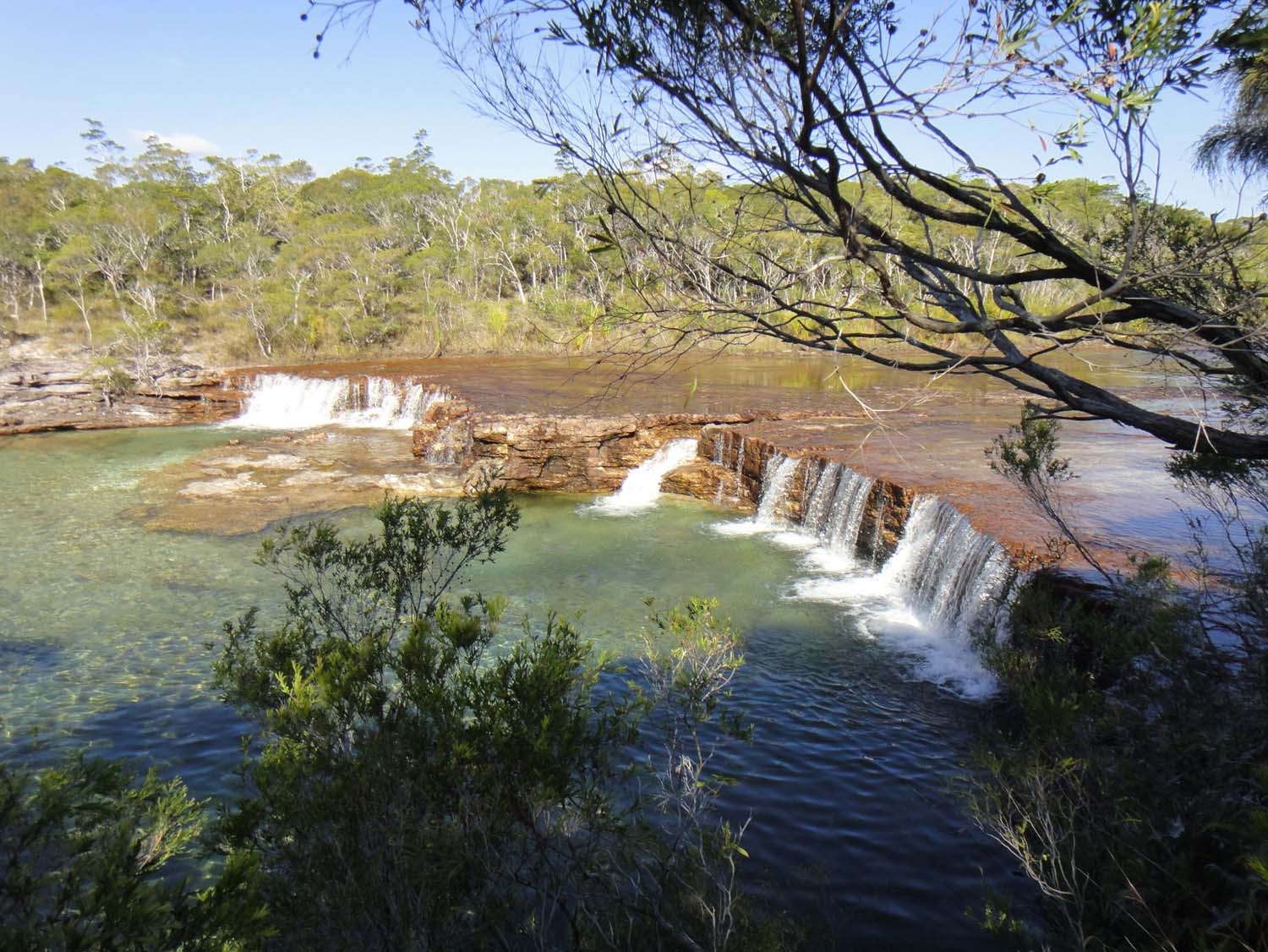 Fruit Bat Falls – another perfect swim hole we had pretty much to ourselves! 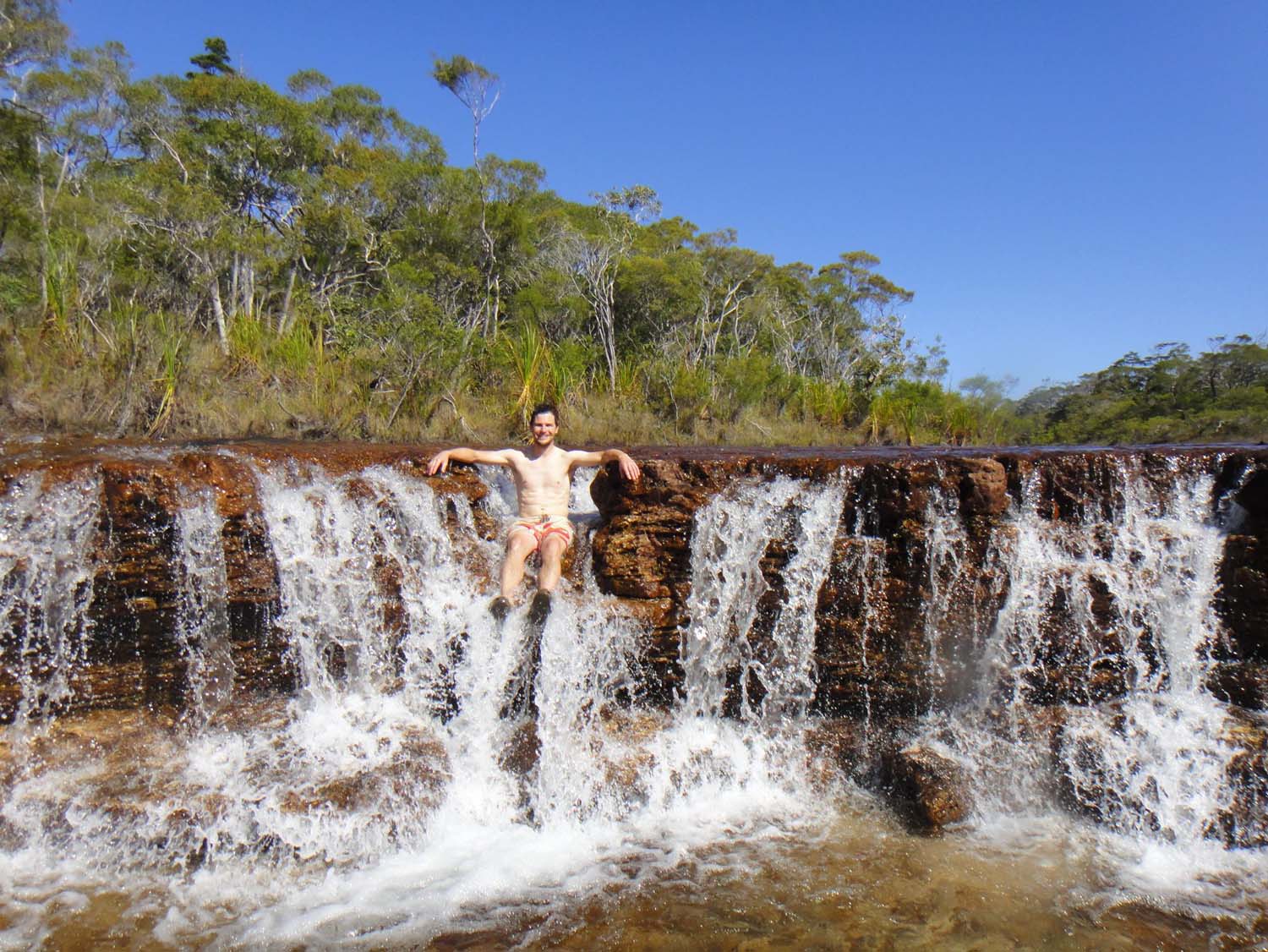 Jon on the throne at Fruit Bat Falls 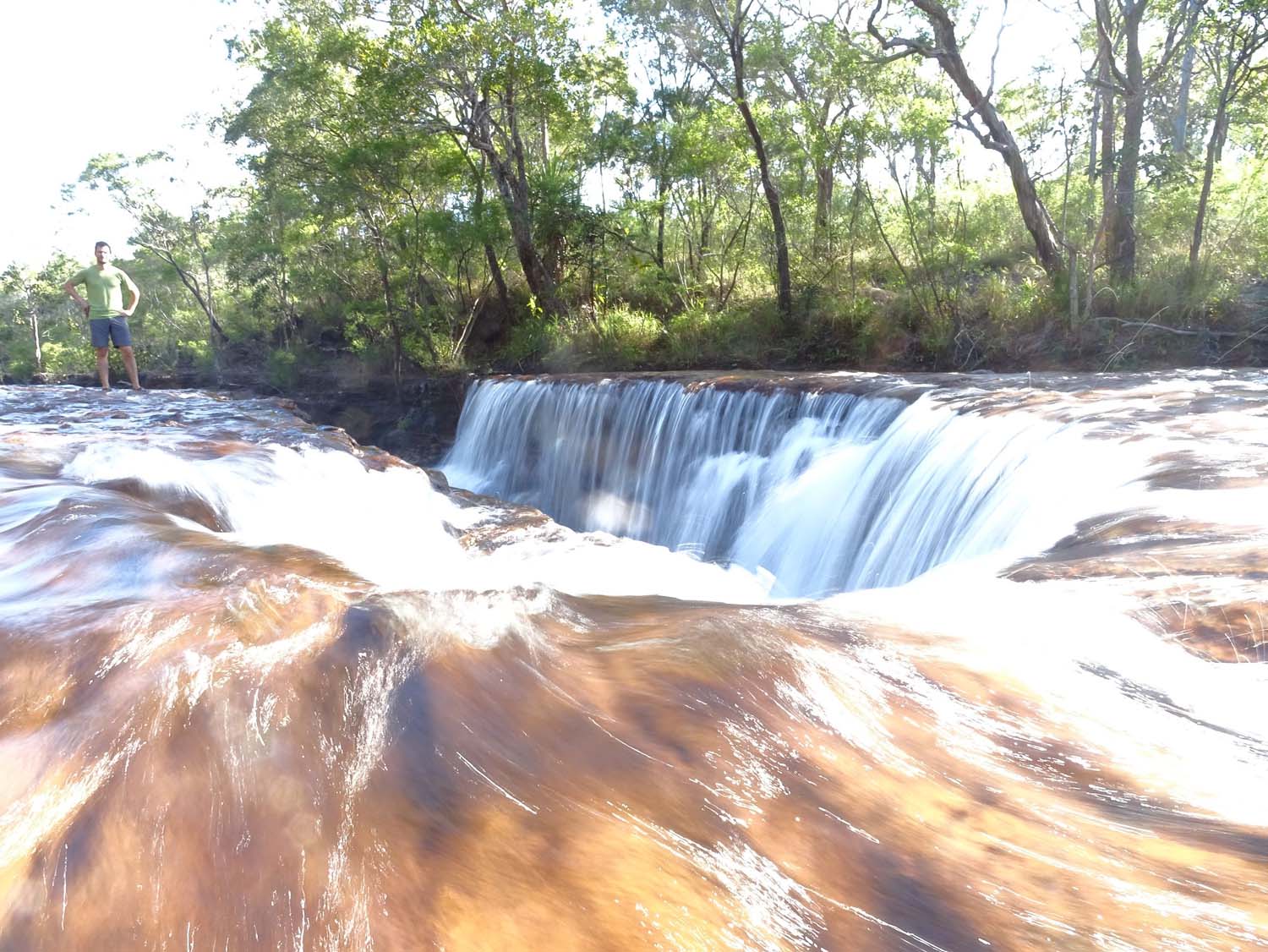 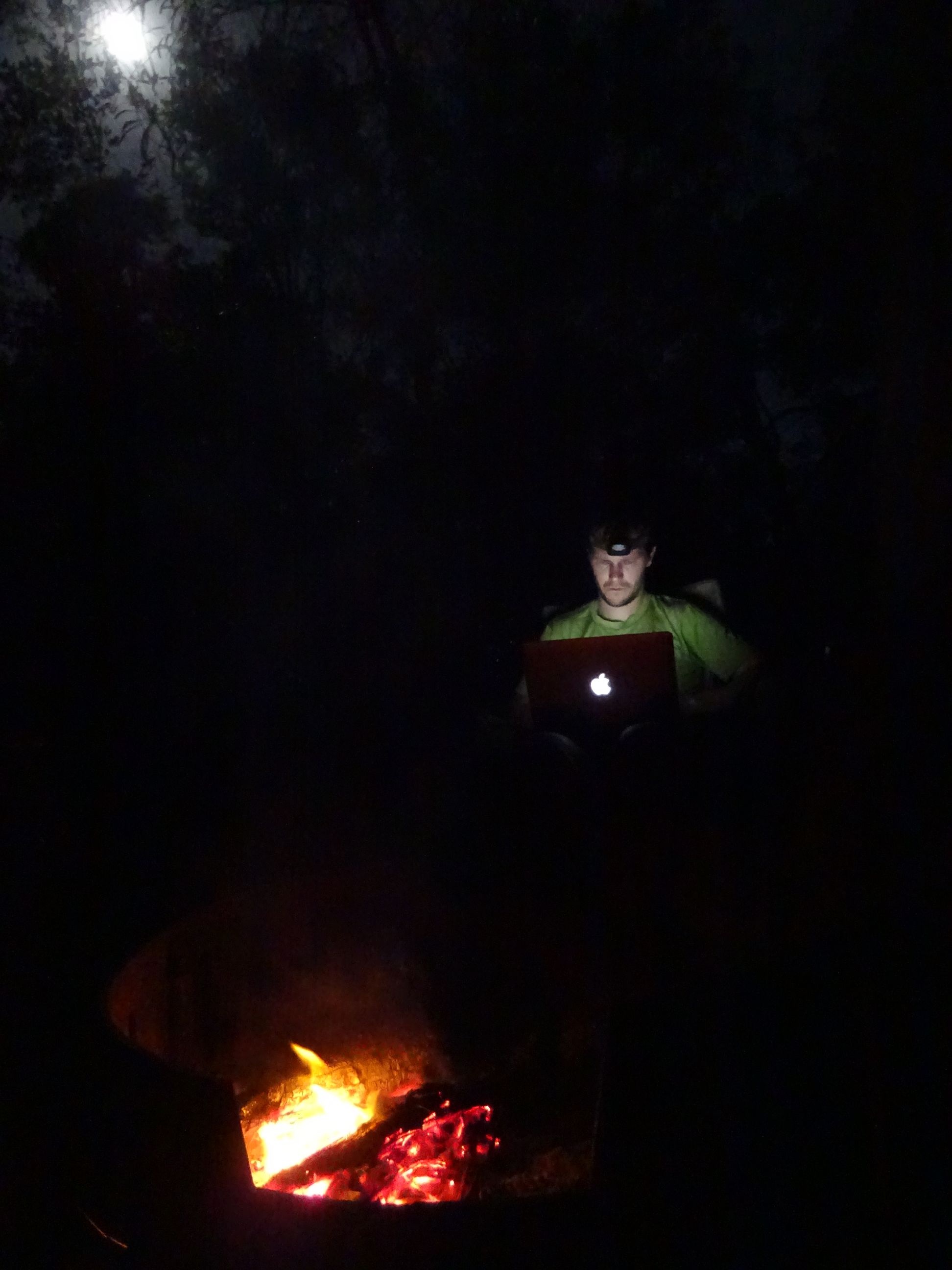 we had amazing campsites on the whole trip 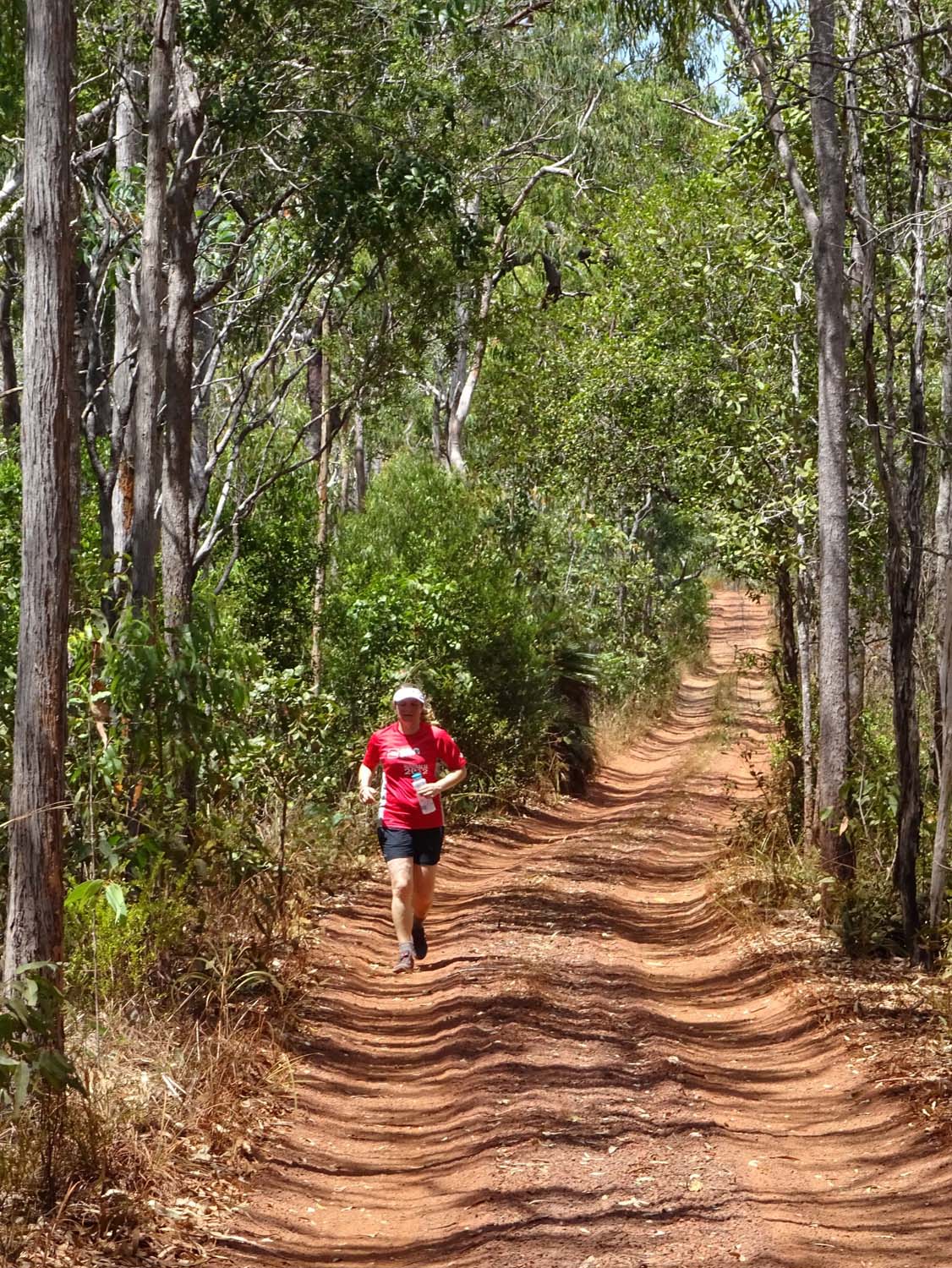 a run on the Old Telegraph Track – this would be an awesome ultra run! 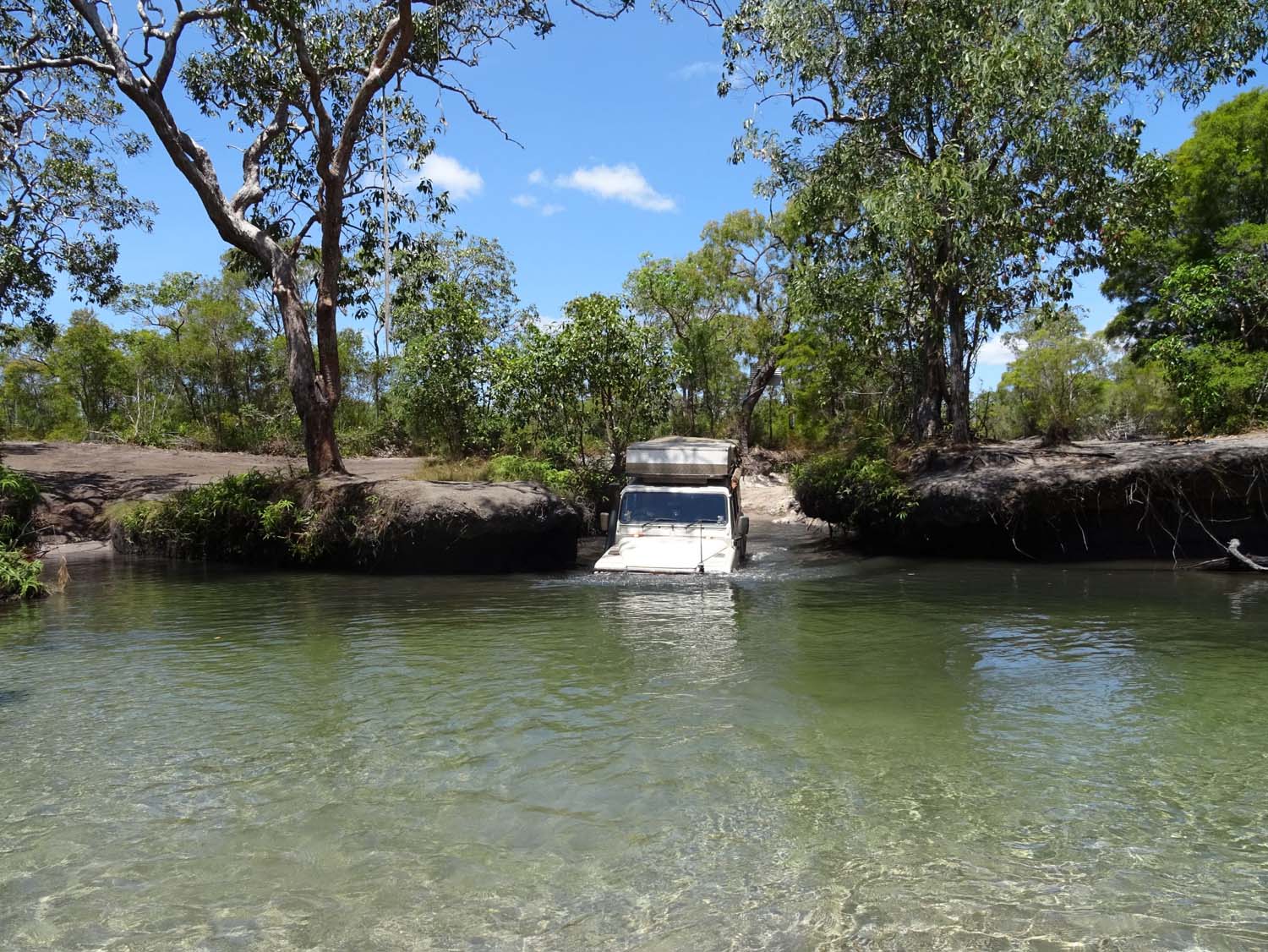 Lara going for a swim at Nolan’s Creek

a beautiful bee bird, looking a bit like Zorro

From the top of the OTT it’s only a short drive to The Tip. Getting to the actual tip of the country involves a short walk over the last headland. We enjoyed lunch there, whilst watching the many turtles and dugongs pop up their heads around us in beautiful turquoise water. The next morning we dropped off Lara at the loading docks in Seisia for her trip to Cairns on the container ship. We watched her being loaded and then drove out to Somerset beach where Hamish and Selena picked us up. Mick, a good friend, had put us in contact and it was the best possible end of our trip up the Cape. They run a brilliantly located fishing lodge on Albany Island and we thoroughly enjoyed staying with just the 4 of us on this tropical remote island. Amazing! 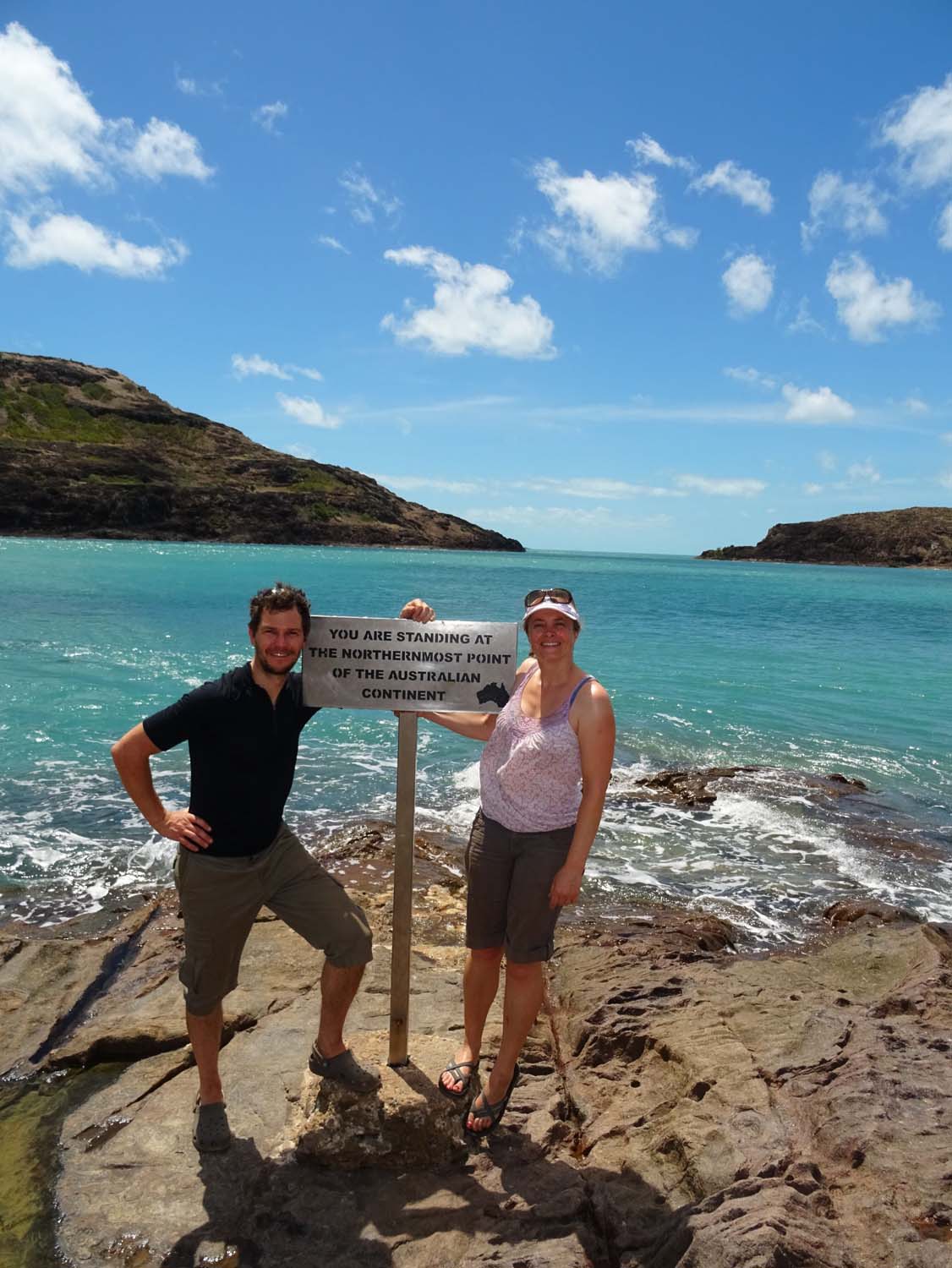 we make it to the Tip, Australia’s most northerly point on the main land 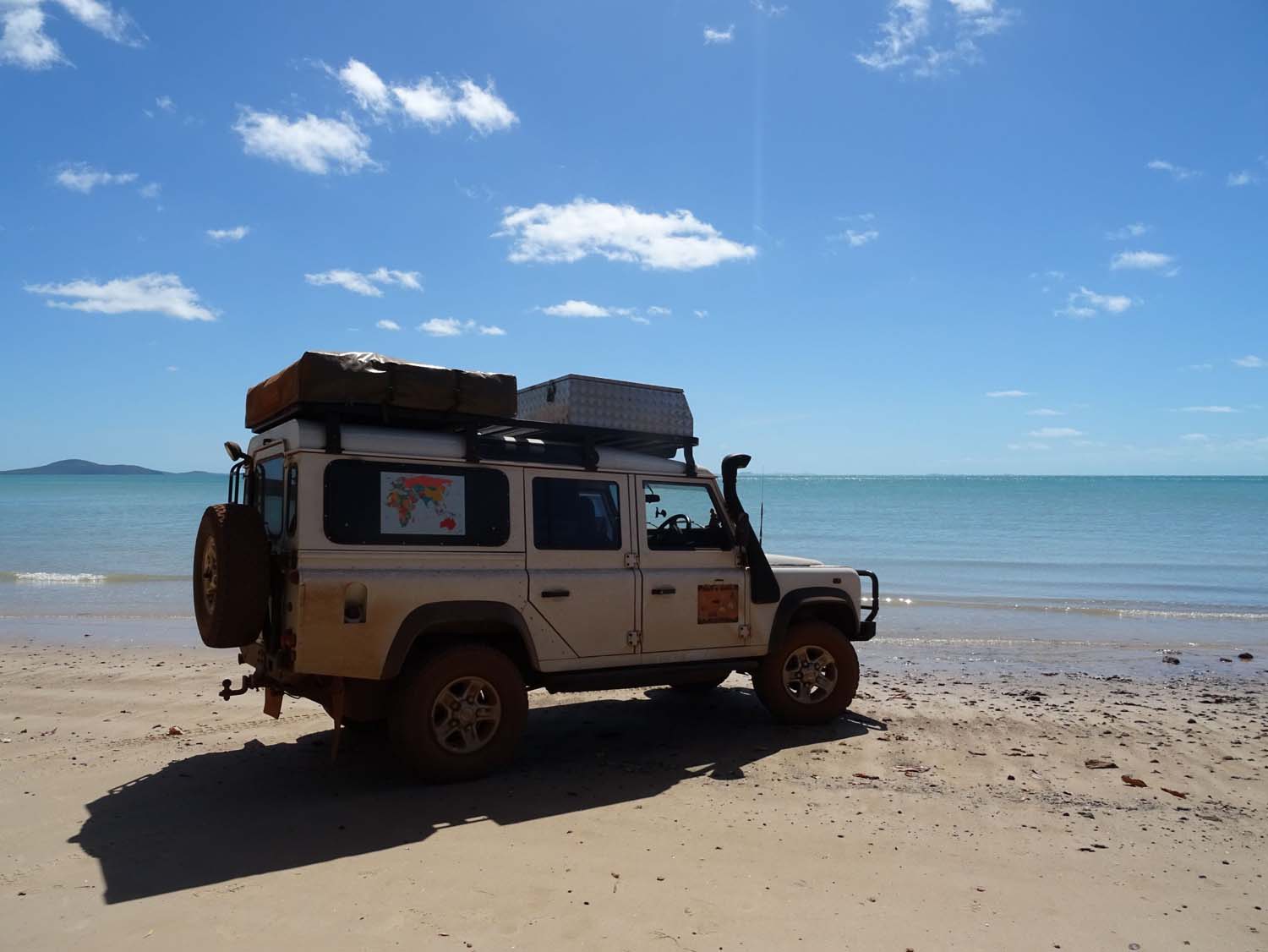 Lara at the tip of Australia 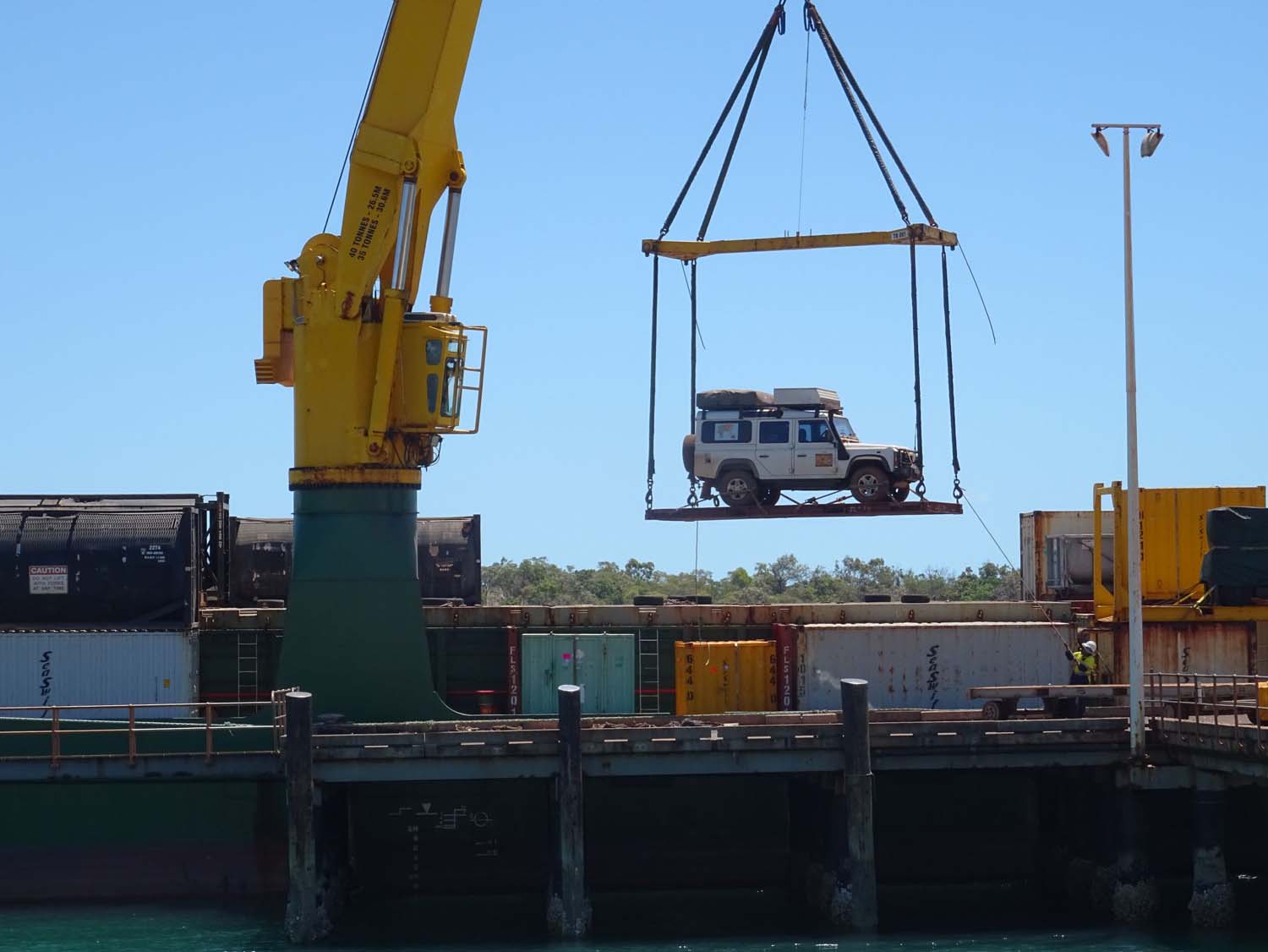 Lara being loaded onto the container ship back to Cairns 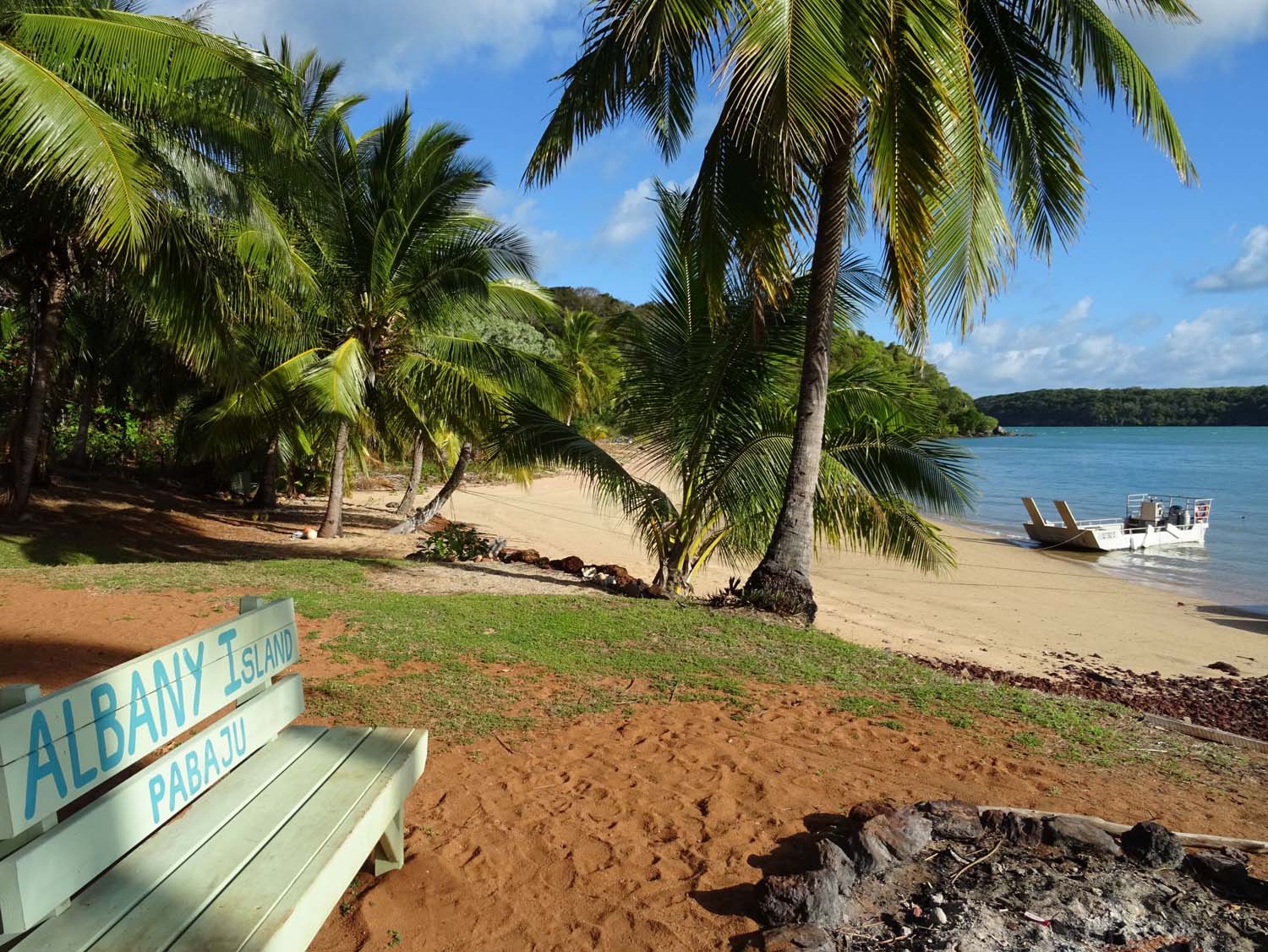 We went for a run on the 5km track across the island, read our books, lazed in the hammocks underneath the coconut trees, ate some superb meals (the Queen Fish caught by Jon the second day!), watched a shark gathering and a croc cruise past from the jetty, shared stories around the campfire, cast a few lines from the boat, admired the billions of stars visible from this unpolluted part of the world and had some fun with the local spiders… if only we had more time to enjoy this piece of paradise… 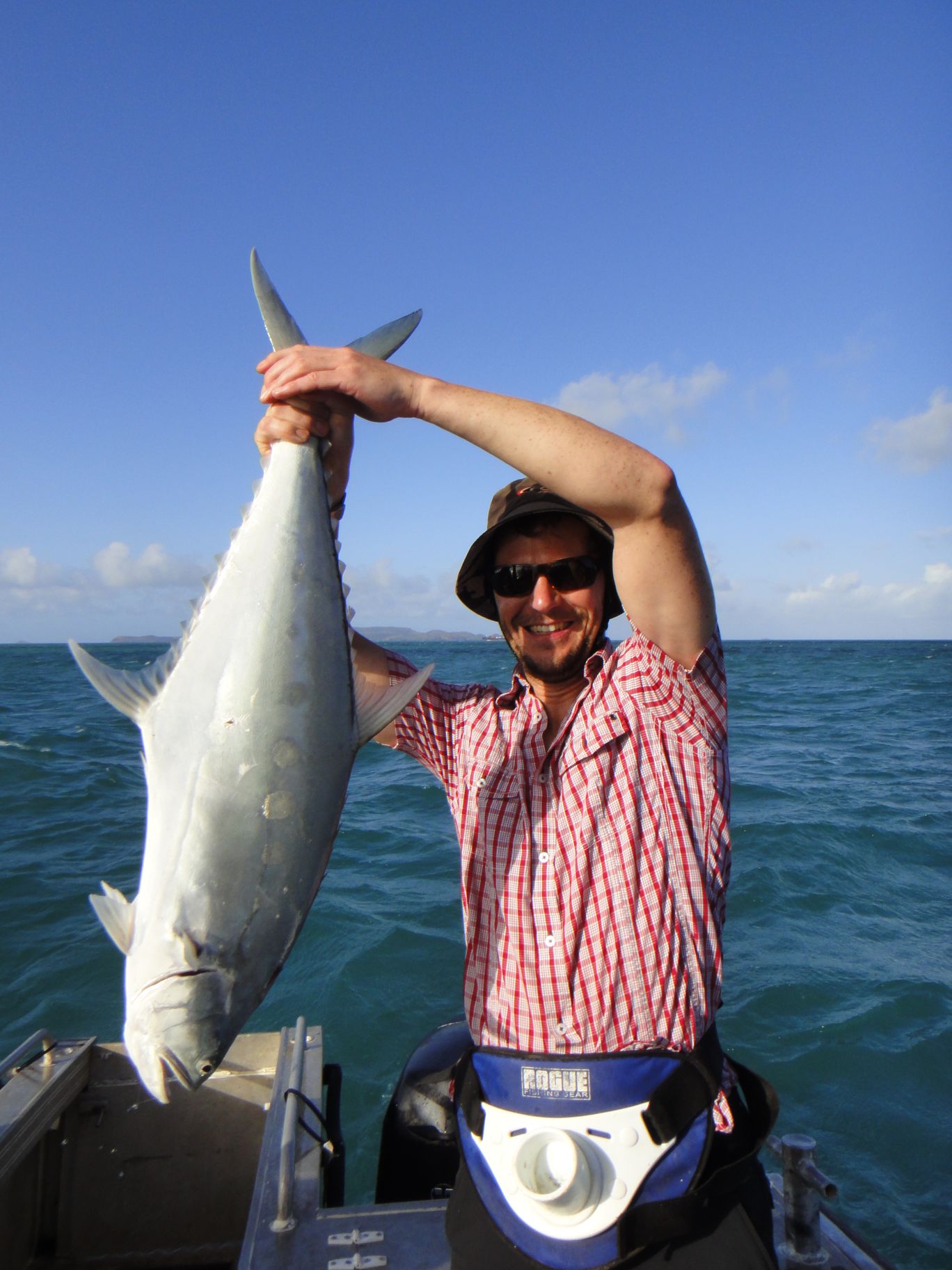 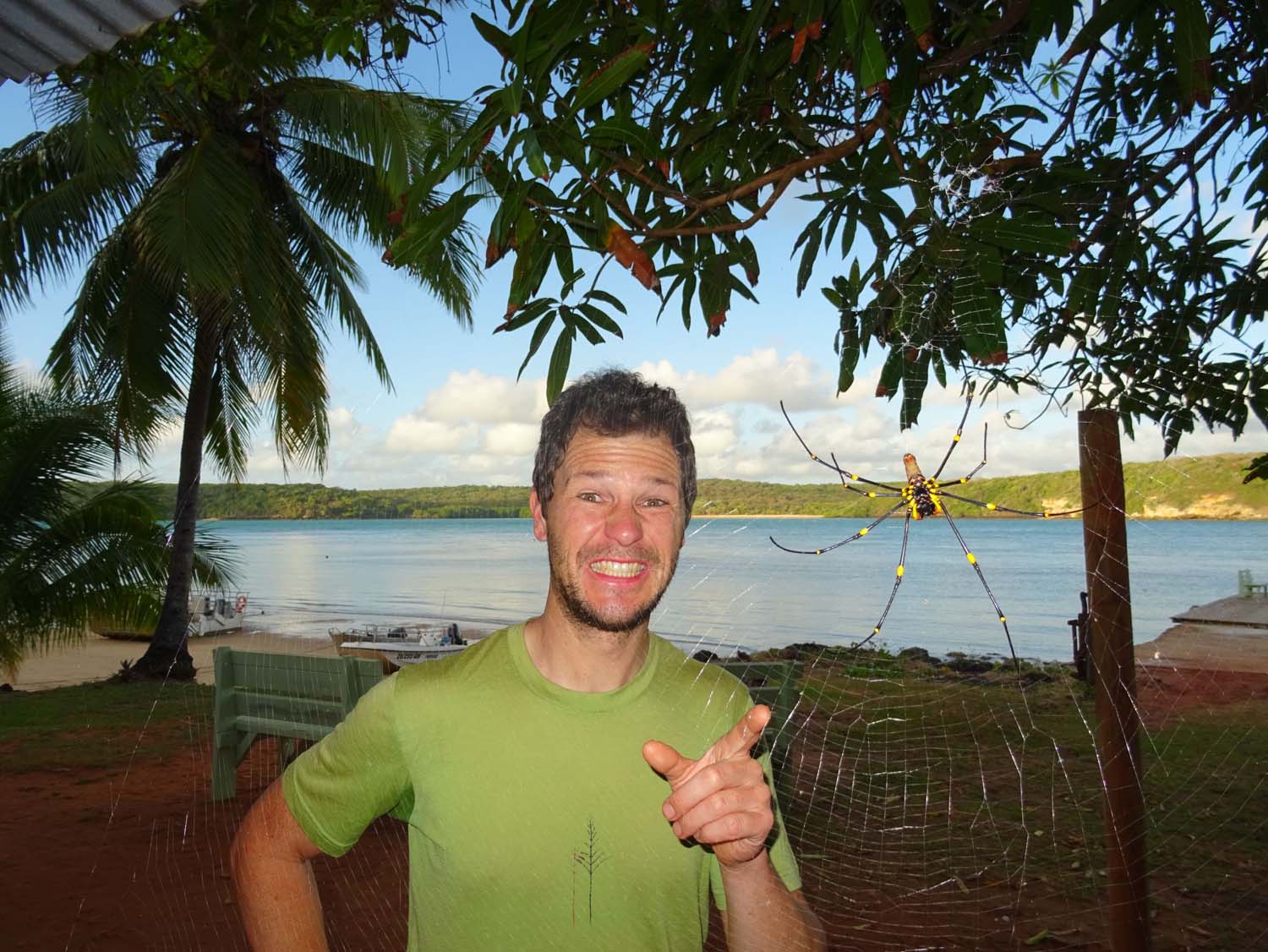 Jon was convinced it wasn’t a real spider as it is the size of his head! 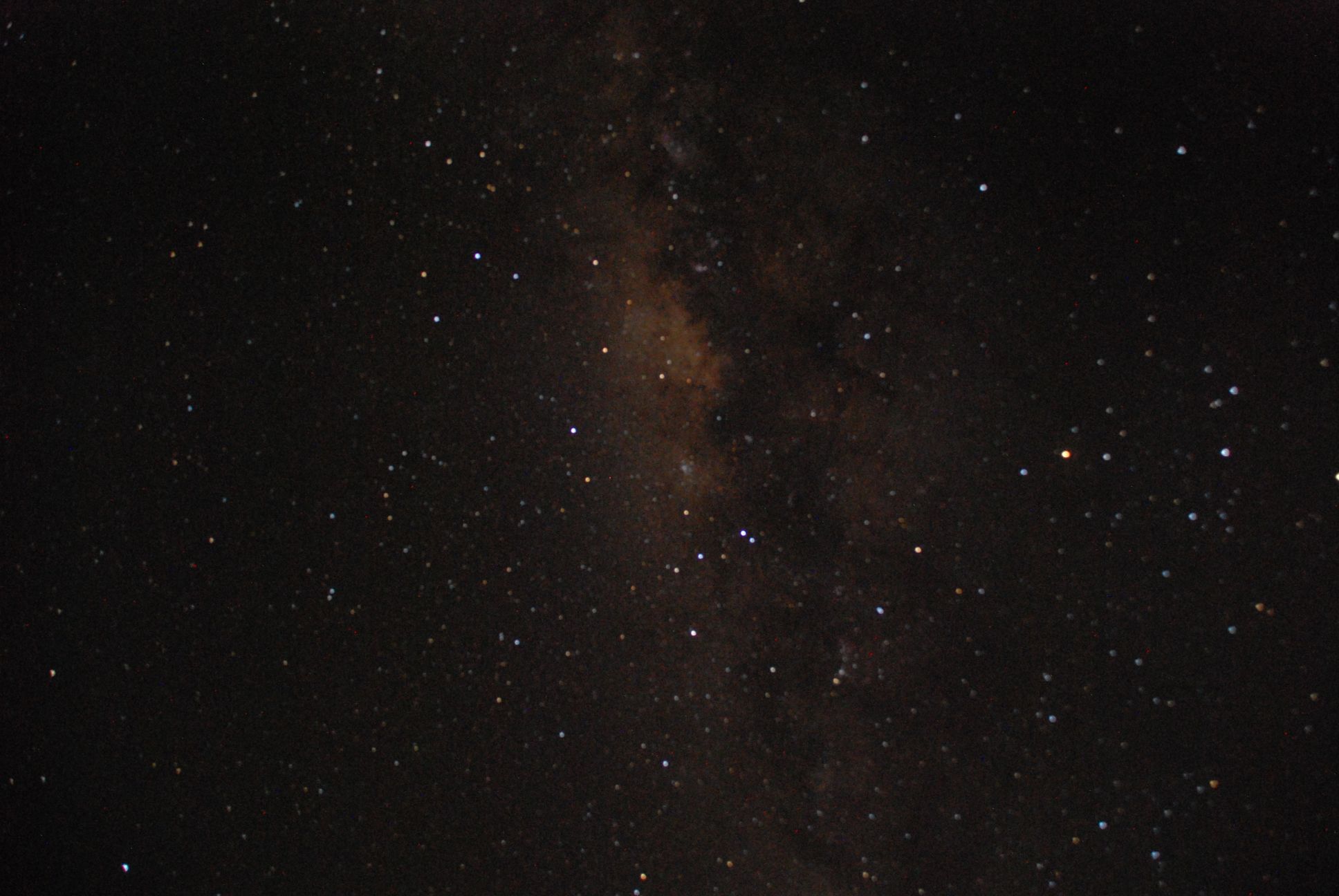 When it was time to leave we realised the ferries to Thursday Island (TI) from Seisia don’t run on Sunday – a slight hiccup in our plans as we needed to get there on Sunday to ensure we would be able to connect to the morning flight from neighbouring Horn Island back to Cairns. So, we called the local taxi service, which just happens to be Cape York Helicopters. Our flight just happened to fly over the tip of Australia, its sensationally coloured blue waters with the many turtles and dugongs made for a memorable 15 min flight.

our taxi service from Albany to Horn Island

We made the flight after exploring TI and picked up Lara from the Seaswift depot in Cairns, before starting our long drive back to Brissy. Again we stopped in Gladstone to stay with Darren and Kirsty so we could have a slightly longer catch up with them this time plus another stop in Sandgate to catch up with Guy and Cheryl who have recently returned from their second year abroad with the Bee (their camper truck). Arriving home (Marjolein’s place) we began the unloading and sorting of gear for sea or air freight or storage… Not long now before we start our new chapter on a different continent. And of course Lara was given a good clean in preparation for her new owner. 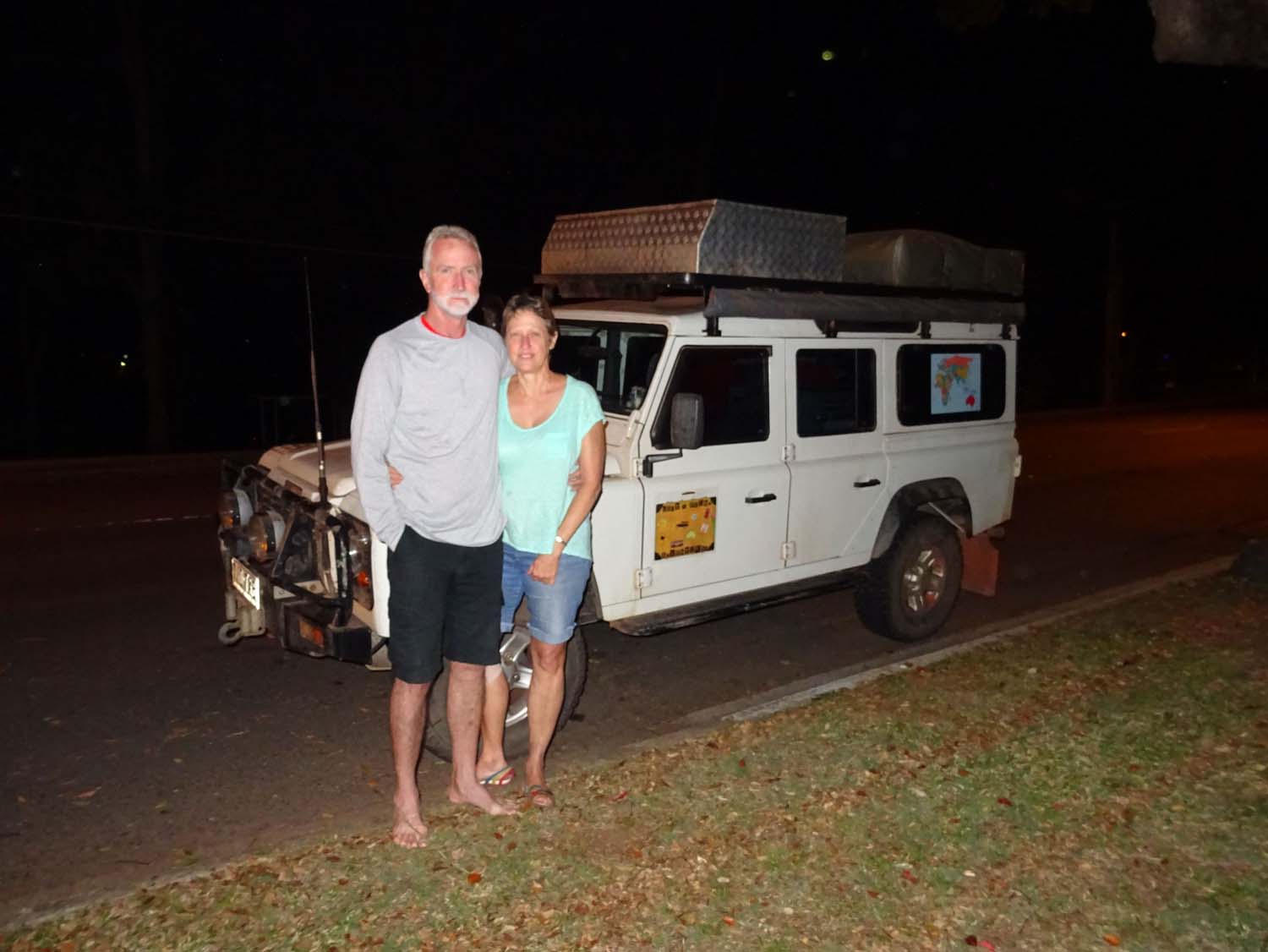 catching up with Guy and Cheryl

Thanks Lara! You have been our baby, our rock, our lifeline and our amazing home for many years now. We will miss the Defender family we have been a part off for so long, but we will especially miss you! I hope your adventurous life will continue for many years to come… 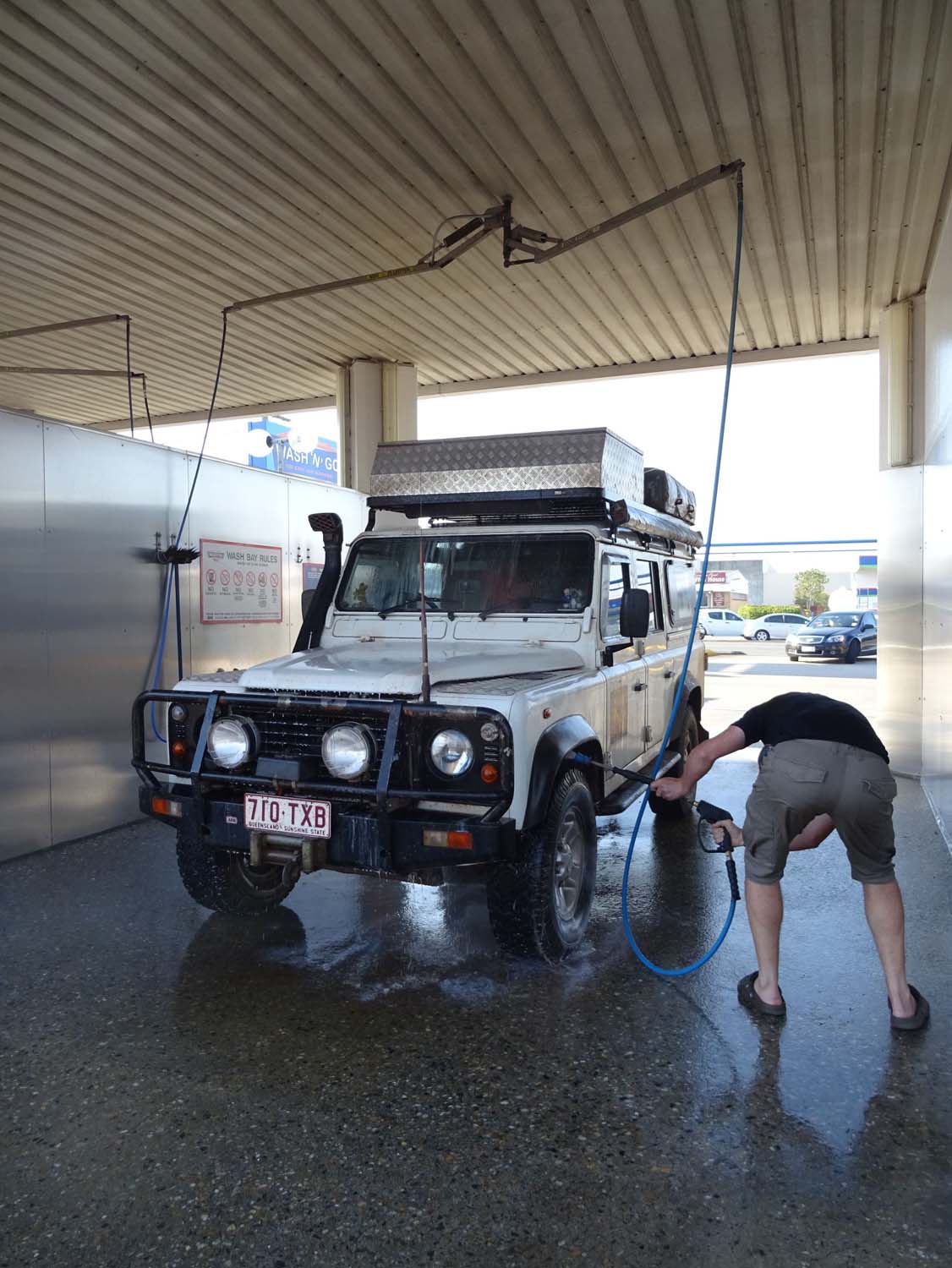