You must be thinking what on earth are we going to tell you about a simple door catch? Every caravan and motorhome has them. You buy a hook in the shop, attach it to the wall on the outside and put the little catch that comes with it on the door, et voila, you have a perfectly functioning door catch….

But, you must realise by now that we usually do things our own way. So, true to doing things differently we wanted something else.

We didn’t like the idea of a hook and catch. For the simple reason that with a hook you need to always go behind the door to attach it, or to unhook it, so you can close the door. We like to make it easier and simpler. We liked the idea of just opening the door and it would just ‘catch’. And then to close it we could just pull and it would come away from the catch without us having to unhook it behind the door.

We looked at lots of other caravans and motorhomes to see what they had done, and if any had a solution we liked. But no. Some do have a sort of catch that we liked, but as our door doesn’t open completely flat against the wall it wasn’t really an option for us. Pretty much everyone of them had the same design, or a variation of the theme. Yes simple, yes functional, but we thought we could do better….

Then, when it’s time to close the door, we just give it a bit of a pull and it should come away. Again without the need for us to walk behind the door to unhook something.

Now, we have no idea what size magnet we need for that. The door also needs to stay open when a gust of wind whirs past. We don’t want the wind to decide when the door is closed. We also don’t want the situation where it becomes impossible to close the door as the force of the magnets is so strong that they don’t want to come apart. We have to find some sort of happy middle ground. And who knows, maybe one day we will have to add a hook, just for those super windy days. But for now we decided to give the magnets a go.

You can buy magnets in different strengths (pull force) and we bought two different options to try for the door. We are starting with a north south pair with a pull force of 6kg.

Jude made a test surround and determined the angle required on the surrounds to mount the magnets so they meet perfectly level with each other when the door is open (unfortunately our door doesn’t completely open flat against the wall). She then made the surrounds out of some sample pieces by gluing them together and creating the same angle on one of them.

With a bit of sanding the edges were made a bit rounder. We have mounted the magnets above the window in the door so chances are we won’t ever bump into them, but just to be sure if anything ever brushes past them, we want them to be as aerodynamic as possible, and least damaging.

Jude created a base-plate too. We glued the base plate to the surface of the wall and door. And then mounted the surround with the magnets to them. This way we can always make a new mount if needed as removing something that is glued on is pretty much impossible. 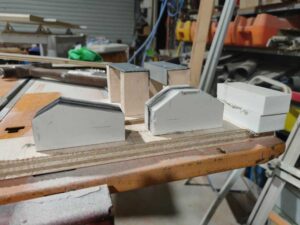 But it was decided that the material used for the prototype wasn’t good enough and Mark again came to the rescue. We kept the same basic structure as the prototype but used aluminium square tubes as the base and hard plastic for the magnets to go inside. And with Mark’s machines he can make the hole for the magnet exactly the depth we wanted which was the height of the magnet plus a teeny, tiny bit so the magnets don’t actually bang into each other. 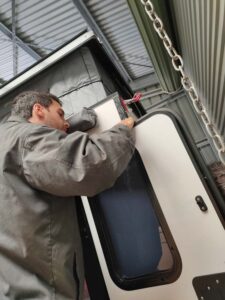 Mark working out the location and angle for the magnet holders

We closed off the aluminium tubes with some rubber feet and screwed the magnets in place. As you can’t glue the plastic we used we added screws through them to connect it to the aluminium. Then we just had to glue the aluminium bases to the wall and the door and let it dry. 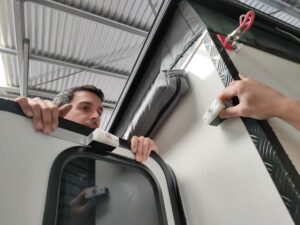 they are almost ready, we think they look great

And now we have our own funky magnetic door catch. And it works amazingly! We’ll let you know if we ever get into windy conditions that challenge this design. 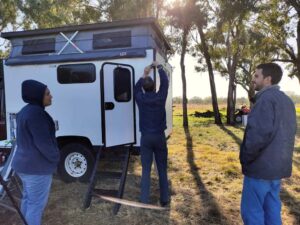 the next day we remove the tape as the glue has now dried and we can use the magnets to keep the door open, so much better that a piece of duck tape