Ever since I was a kid and crazy about horses I have known about the Przewalski horses, the only remaining wild horses in the world. Their chromosomes are slightly different from other horses and in the wild (Mongolia and Kazakhstan) they were very nearly extinct. Then, in the 80’s and 90’s they decided to reintroduce them back into the wild from zoos in the west (Netherlands, Germany, UK,…) and it became a success story. There are now nearly 300 of them living in their natural environment in the Khustain National Park, west of Ulaanbaatar.

We turned off the main road at a small sign and drove to the national park’s entrance, arriving late in the afternoon. We were lucky, they were still open and the lady selling us the entry tickets spoke good English and was a wealth of information! We had not (and won’t again) experienced this in Mongolia. She had coordinates for the campsite in the park, could tell us good spots to look for the horses and lots more.

As it was already late in the afternoon it was a good time to head out to the only valley with water in it, as many horses would (hopefully) come down for a drink. And we were lucky. We saw 5 in the distance and watched them for a while before driving off a bit deeper into the valley. We stopped off the track where we were going to have dinner, hoping we would see some more. We grabbed our spynos (binoculars – verrekijker) and looked around us. A few minutes later we saw one, and then 3 more came into view. They were heading directly for us! 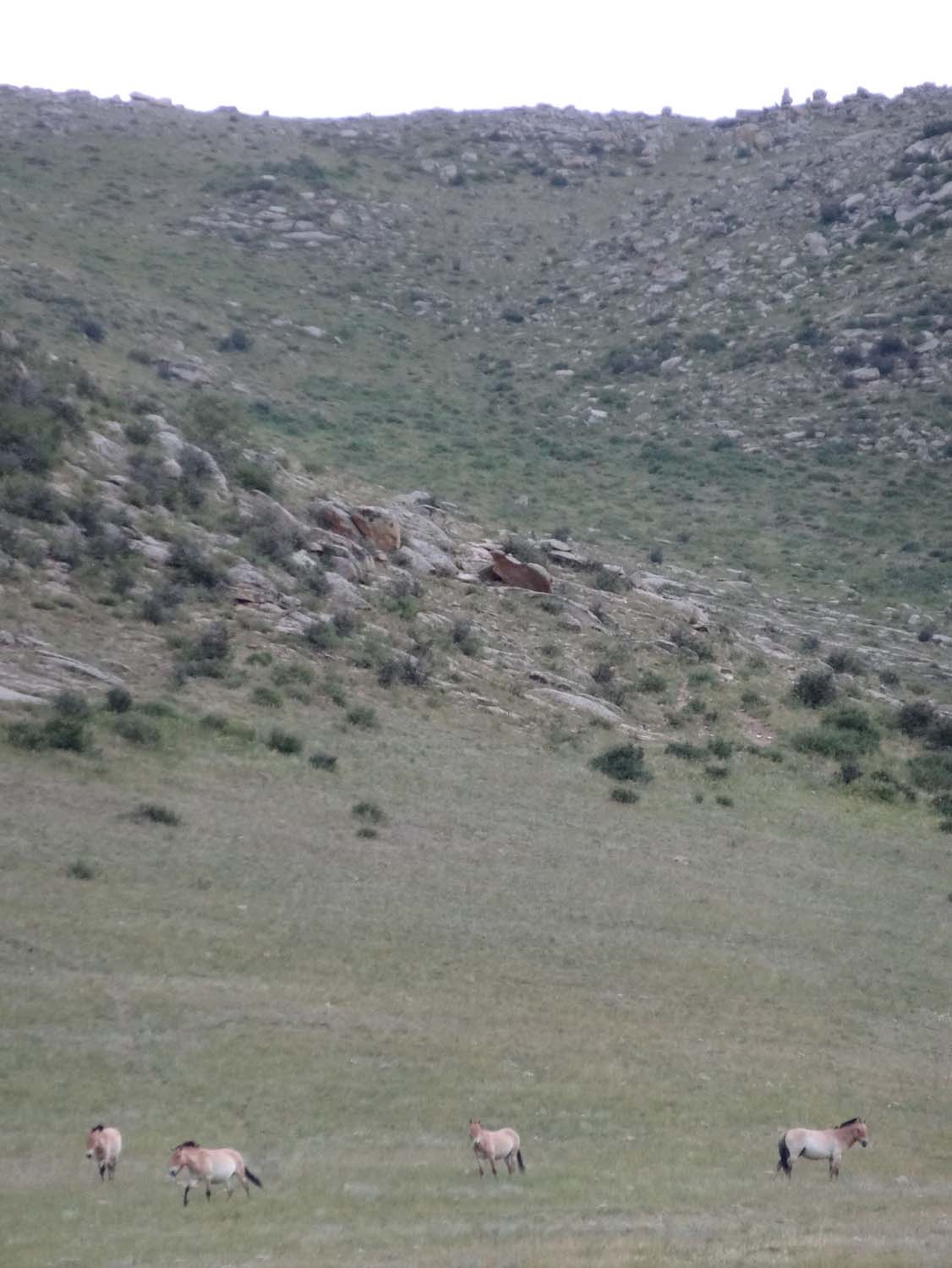 przwalski horses coming down for a drink 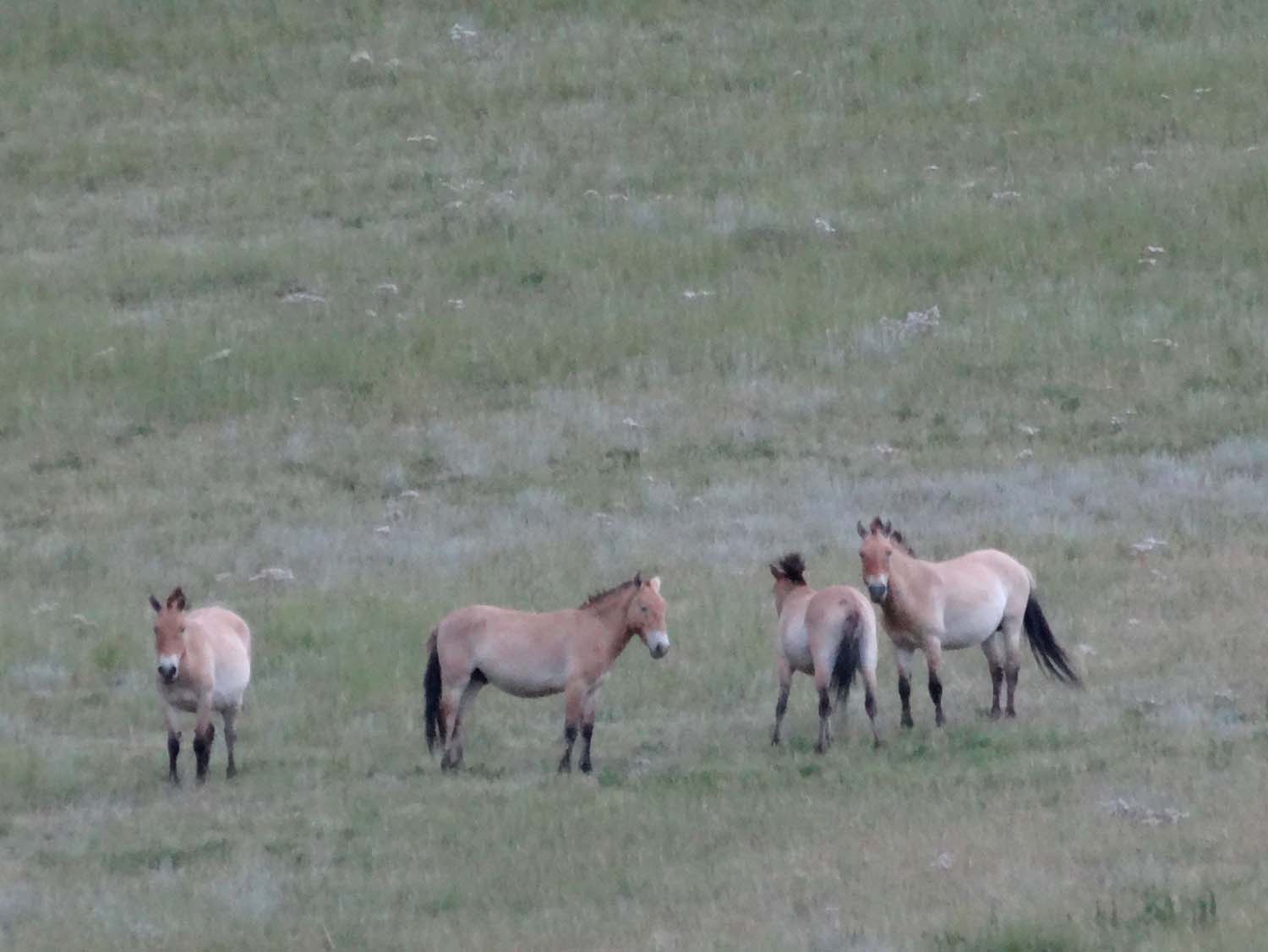 looking at us as we’re in the way

As they came closer a whole busload of tourists arrived too and we all watched them get closer and closer until they trotted past us on their way to the creek. All the other tourists buggered off whilst we continued to watch these 4 and another group of 3 whilst having our dinner. In the distance a huge thunderstorm was sending lightning strikes down every minute or so, a nice background to the already beautiful scene. 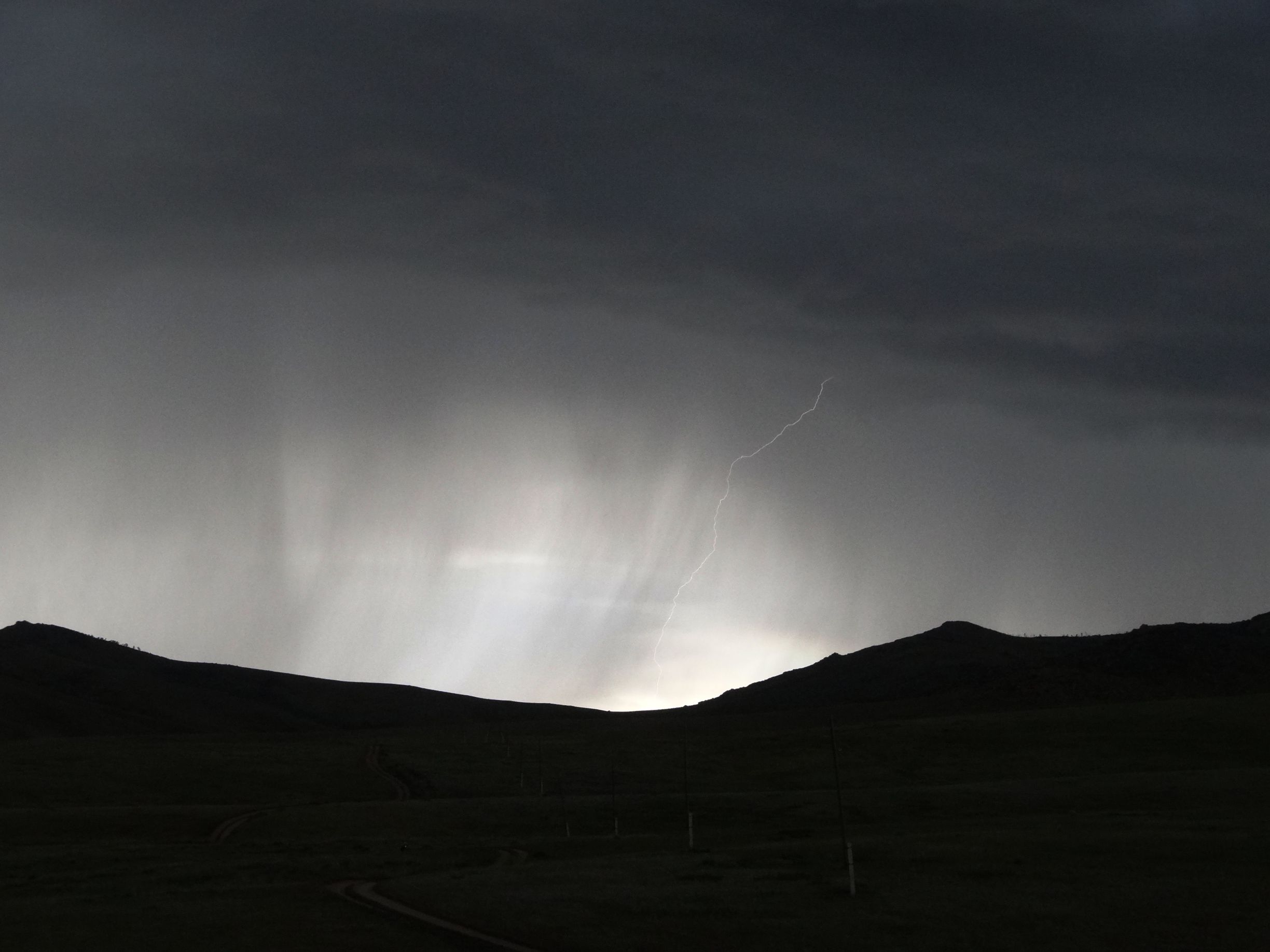 rain and lightning in the distance

After dinner we drove further into the valley as our campsite was up and over the next pass. And then we saw a huge group of Przewalski horses right next to the track, including some foals. They were rolling around in the damp, sandy pools and we watched them as the light began to fade. 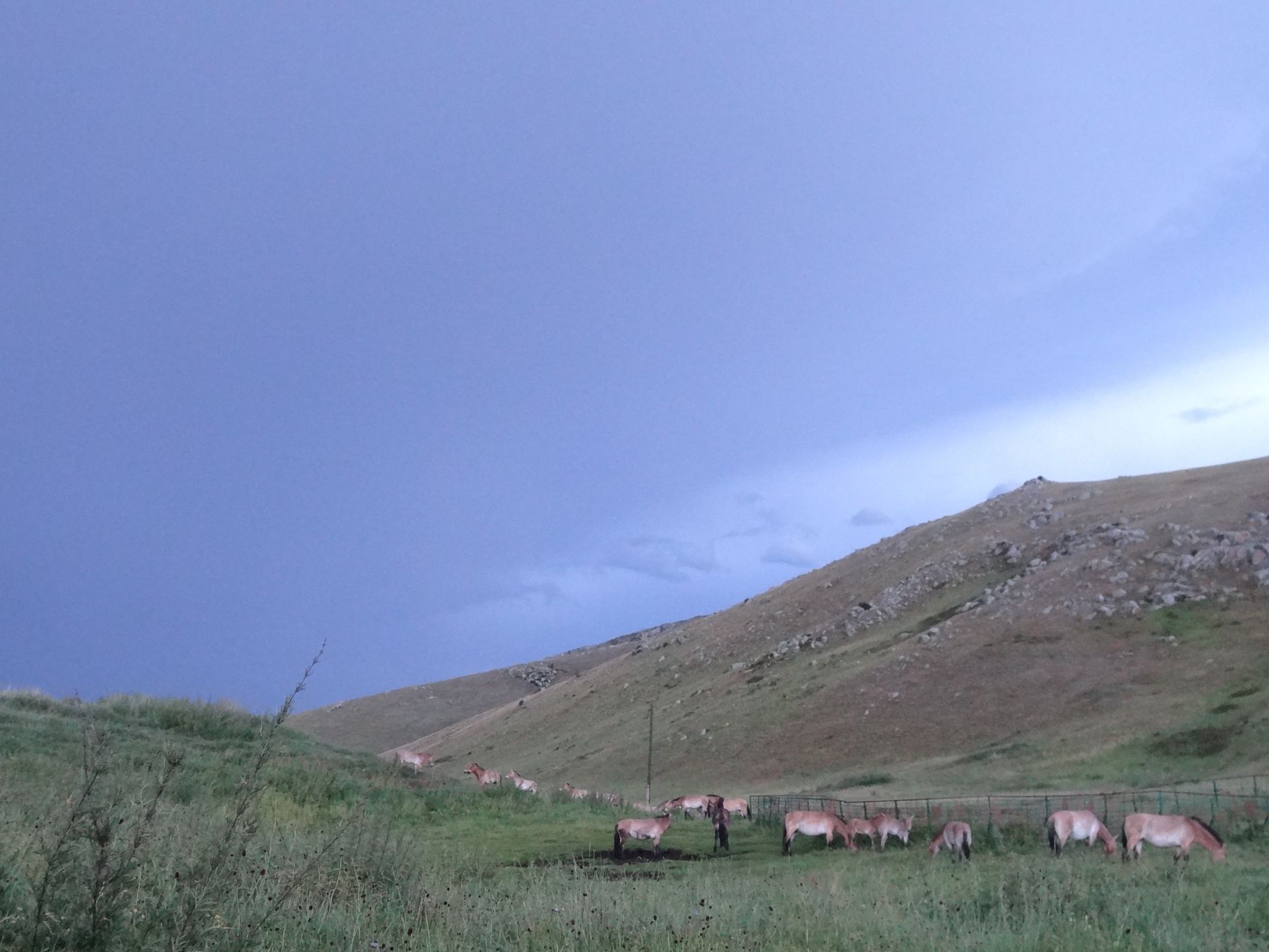 lots of przwalski horses next to the track

A little further, in between the rocks of some shallow gullies, we saw a whole flock of deer too! It was getting darker now, so we continued to the camp (free camping is not allowed in this NP) passing a cute hedgehog on the way. We had the coordinates of the camp, but still had to figure out which tracks to use, which was getting interesting in the dark. About an hour later we finally reached our campsite. 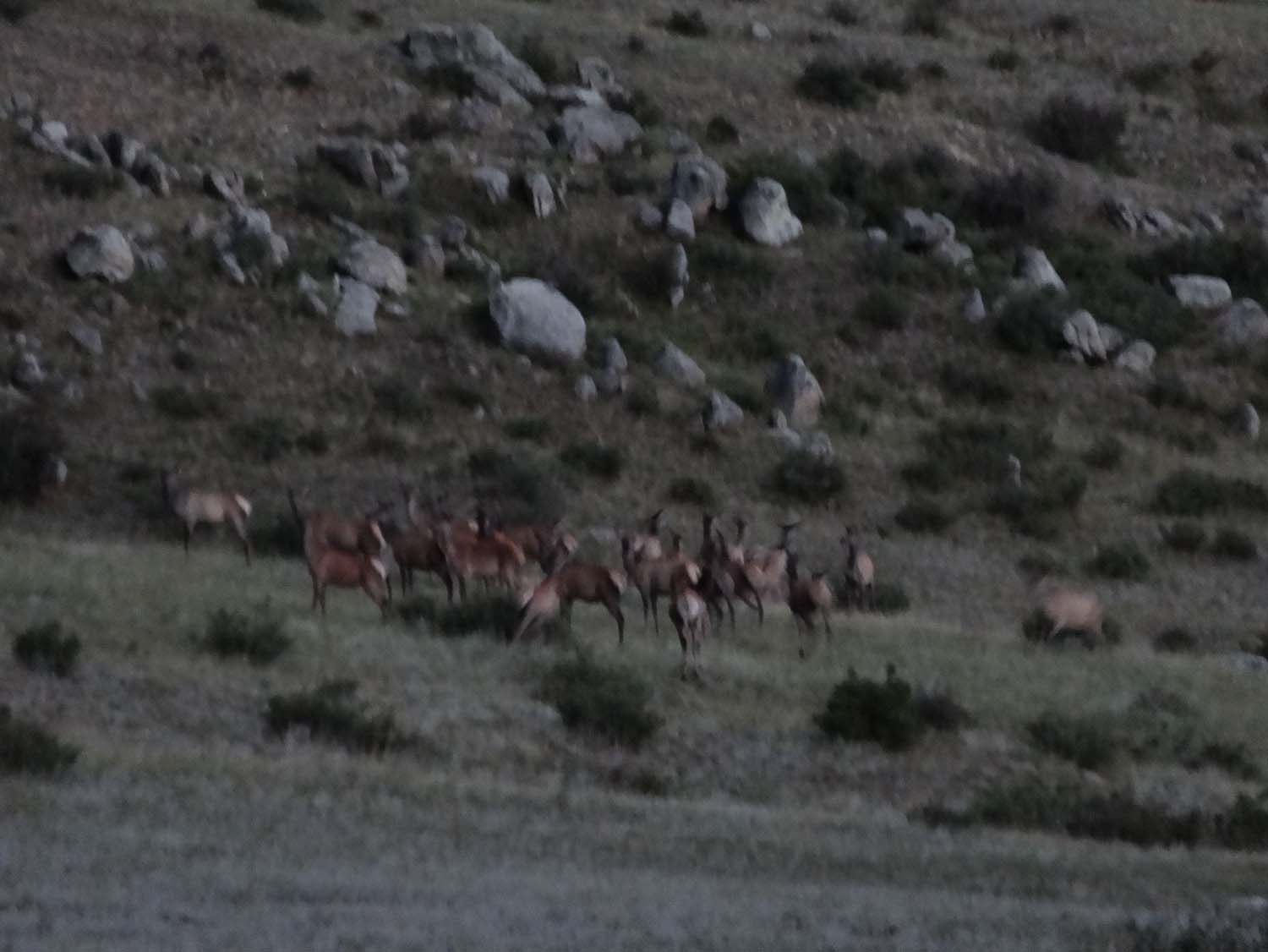 fuzzy deer – it was getting dark and they moved a lot 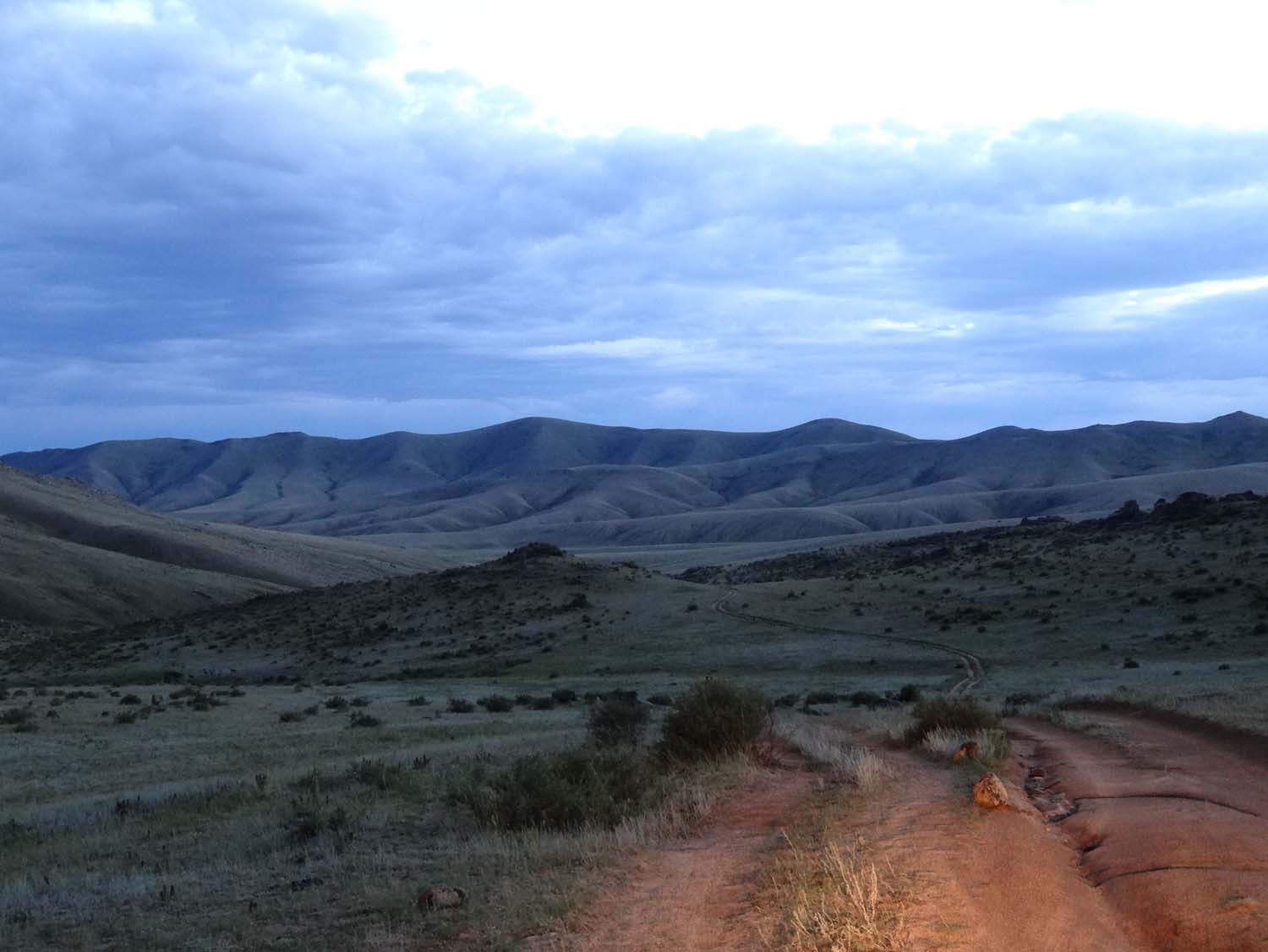 finding the right track after dark was getting harder and harder

The next day we drove off to search for one of the deer stones in the park. These are approximately 2000 year old carved standing stones, many depicting deer. This one was placed next to a huge burial mound, magnificent with the beautiful hills around it. 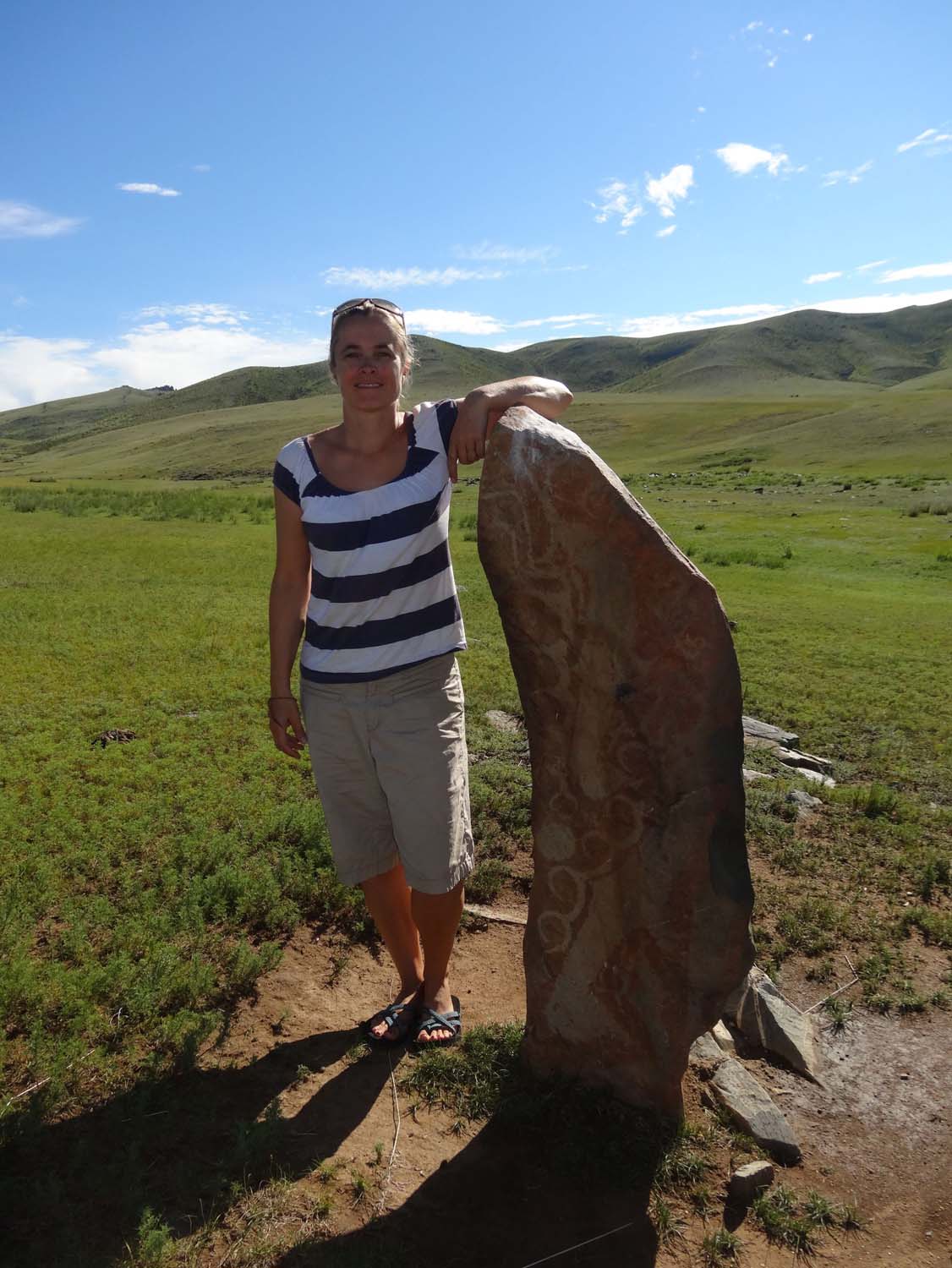 one of many deer stones in Mongolia, not many remain in situ, most have been carted off to various musea

A flock of 9 vultures circled the tops of the hills around us whilst we were there, but they didn’t find anything of interest as they kept going further south in search of something to eat. We did see plenty of marmots and ground squirrels on our way out of the park and also heaps of kites and eagles, but we never saw or heard any of the wolves that also live in the park. 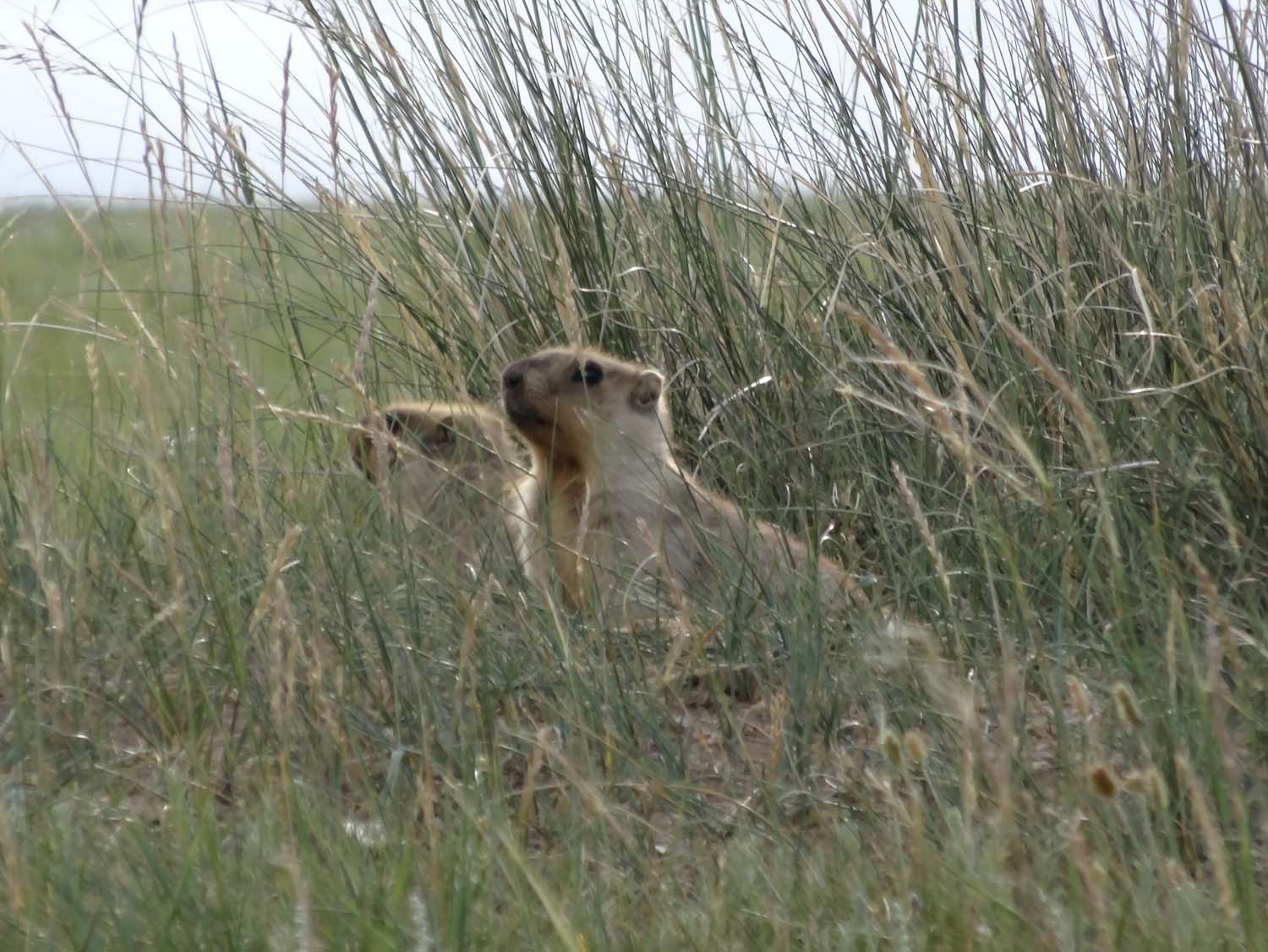 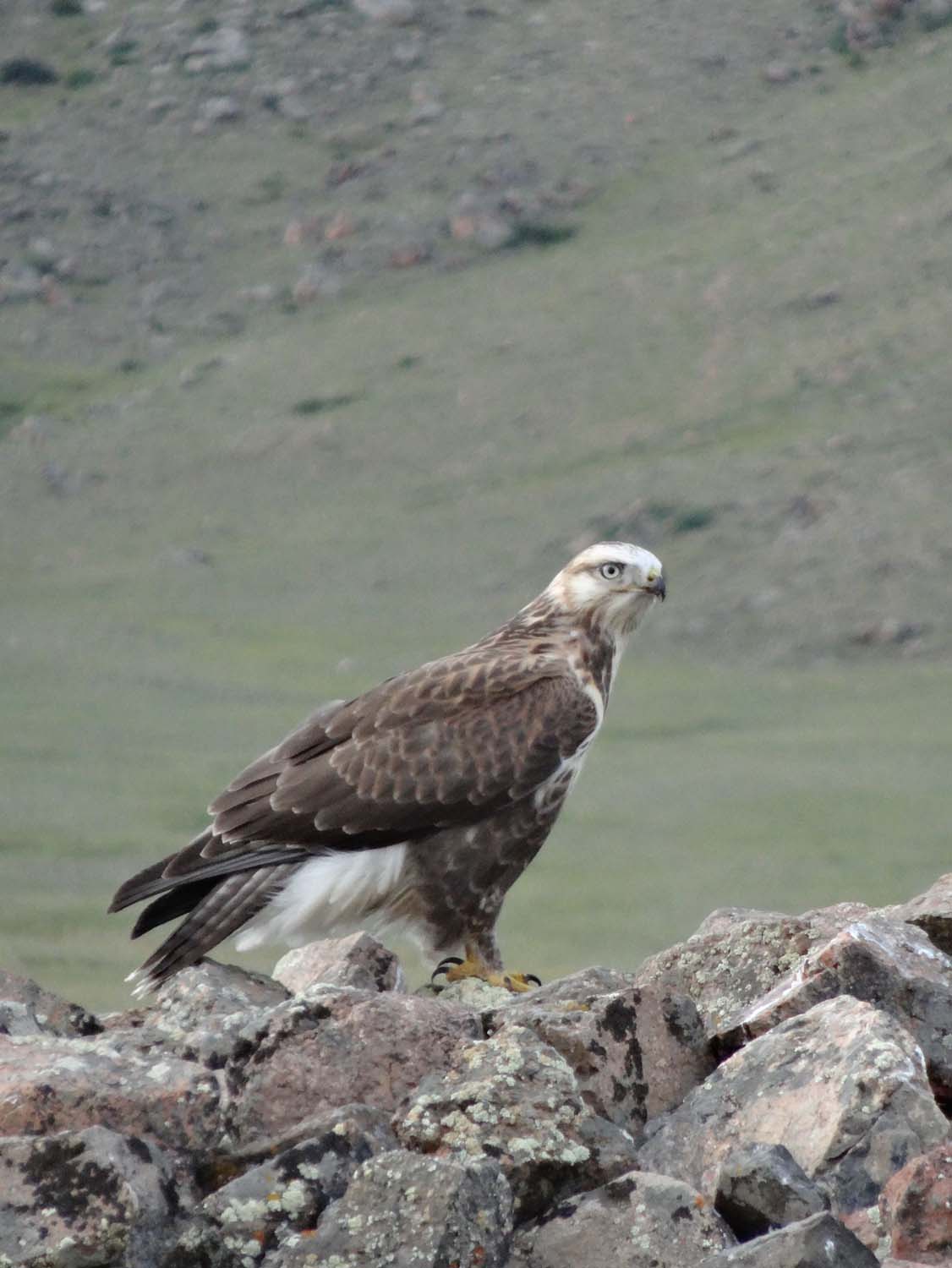 A week or so later we arrived at Tsaagan Nuur National Park, again we arrived late in the afternoon. The guard at the entrance didn’t speak any English, but he did have a map of the park. We paid our entry fee and drove in. The landscape soon changed and parts of it looked like we were driving on the moon. Lots of black basalt interspersed with pine trees. We were driving past a dead volcano that sits near the lake. 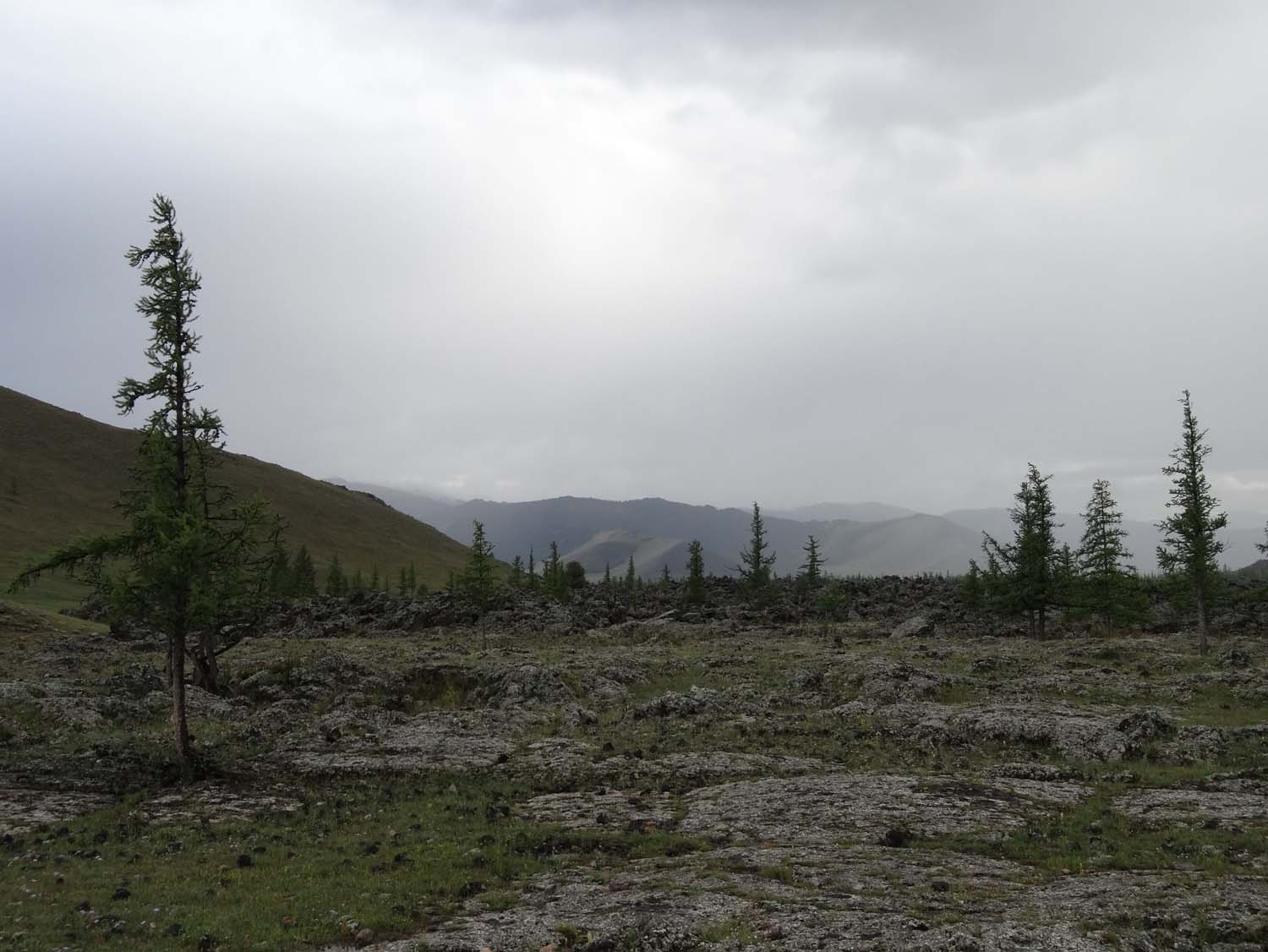 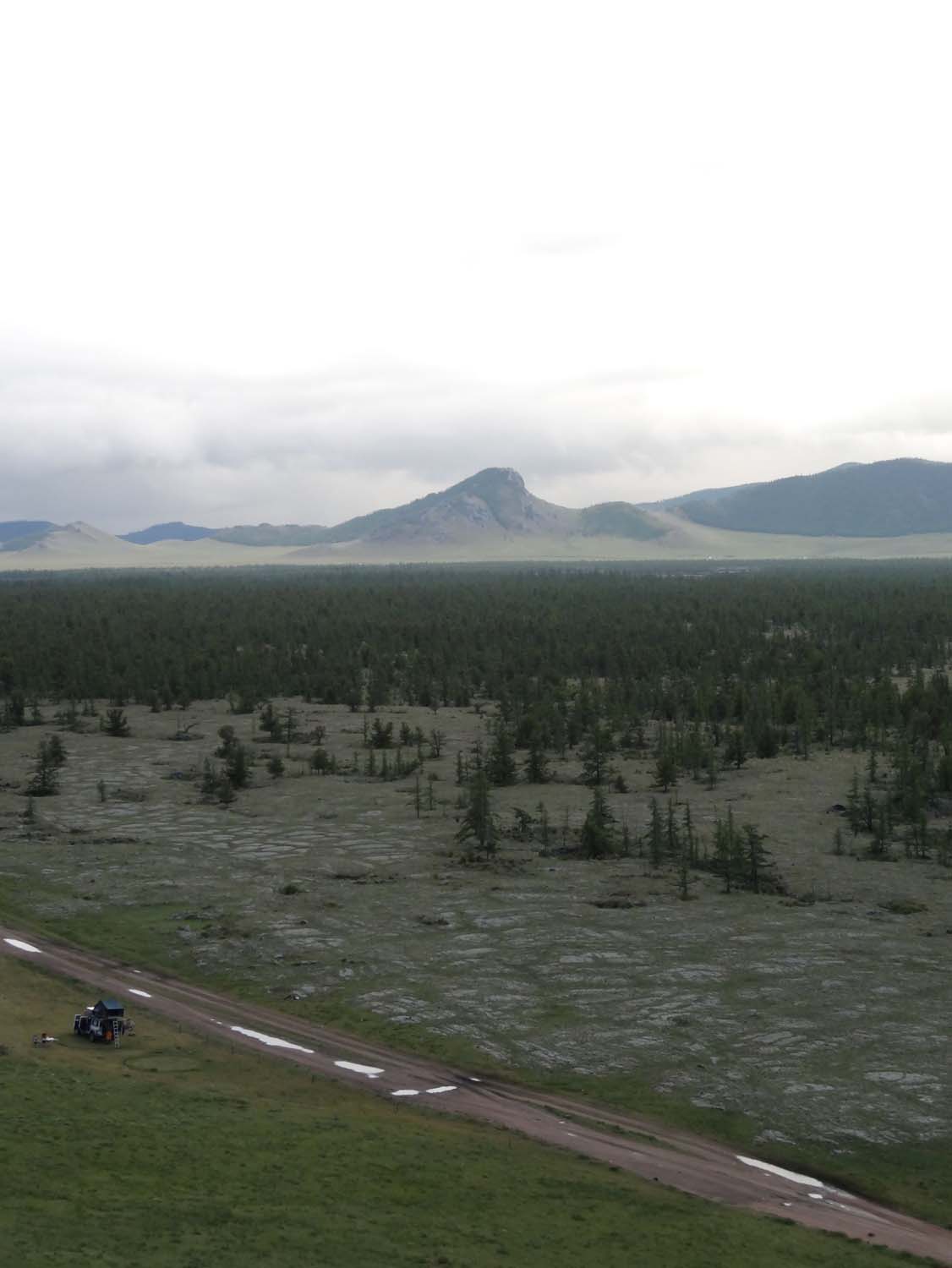 that’s our campsite down there

We found a perfect campsite with views of the lake and set up camp. The next morning we hiked to the volcano. For some reason we didn’t take our rain jackets even though the clouds looked quite threatening. On the way to the volcano we hopped across the old lava fields, through the pine forests and up one side of the volcano. It is quite a beautiful extinct volcano as you can look down into the old crater once you’re at the top. After gobbling up our morning tea with a view, we began our descent when it started to rain. By the time we reached the car we were drenched. Luckily the camera and the gps survived. 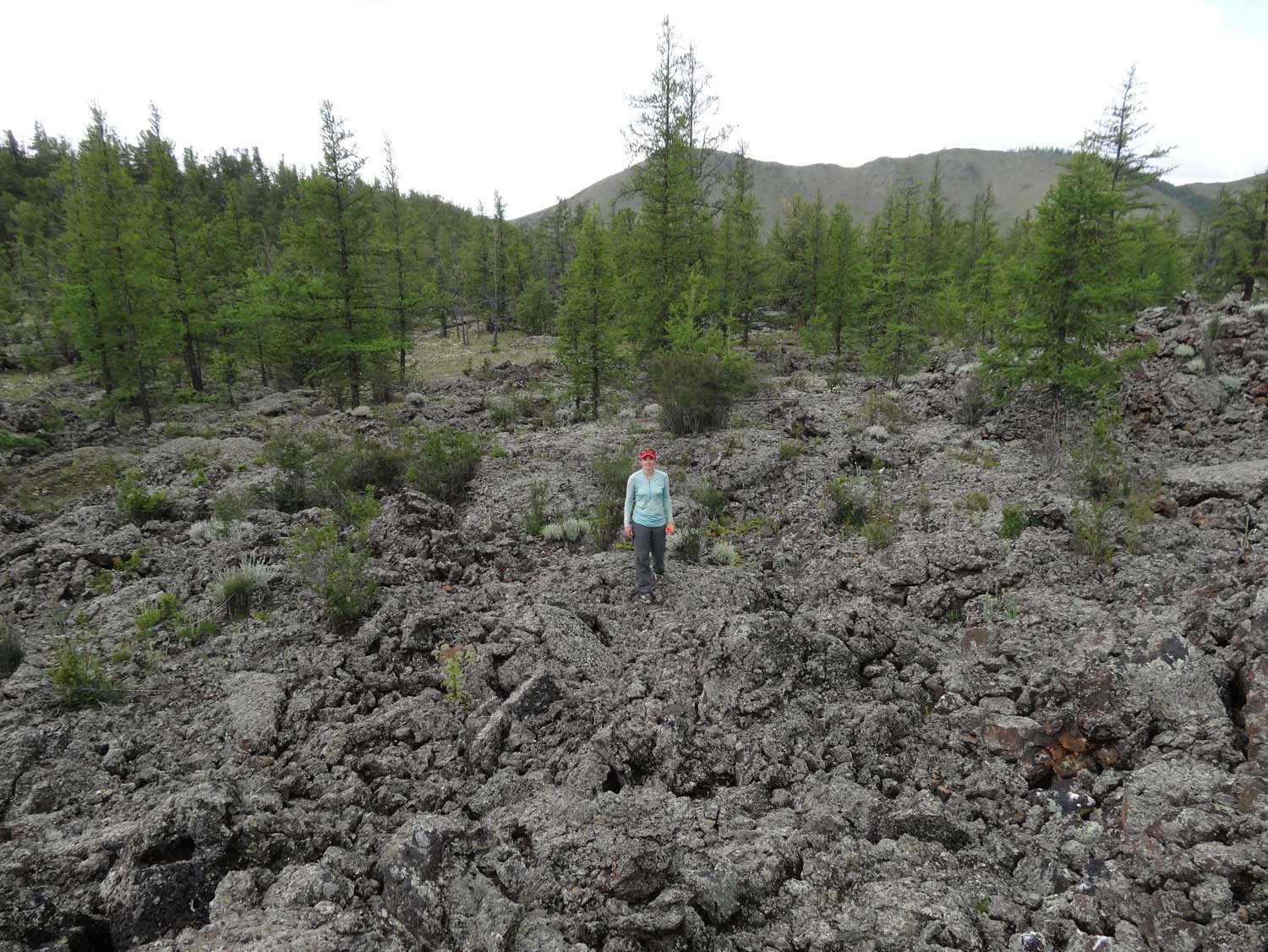 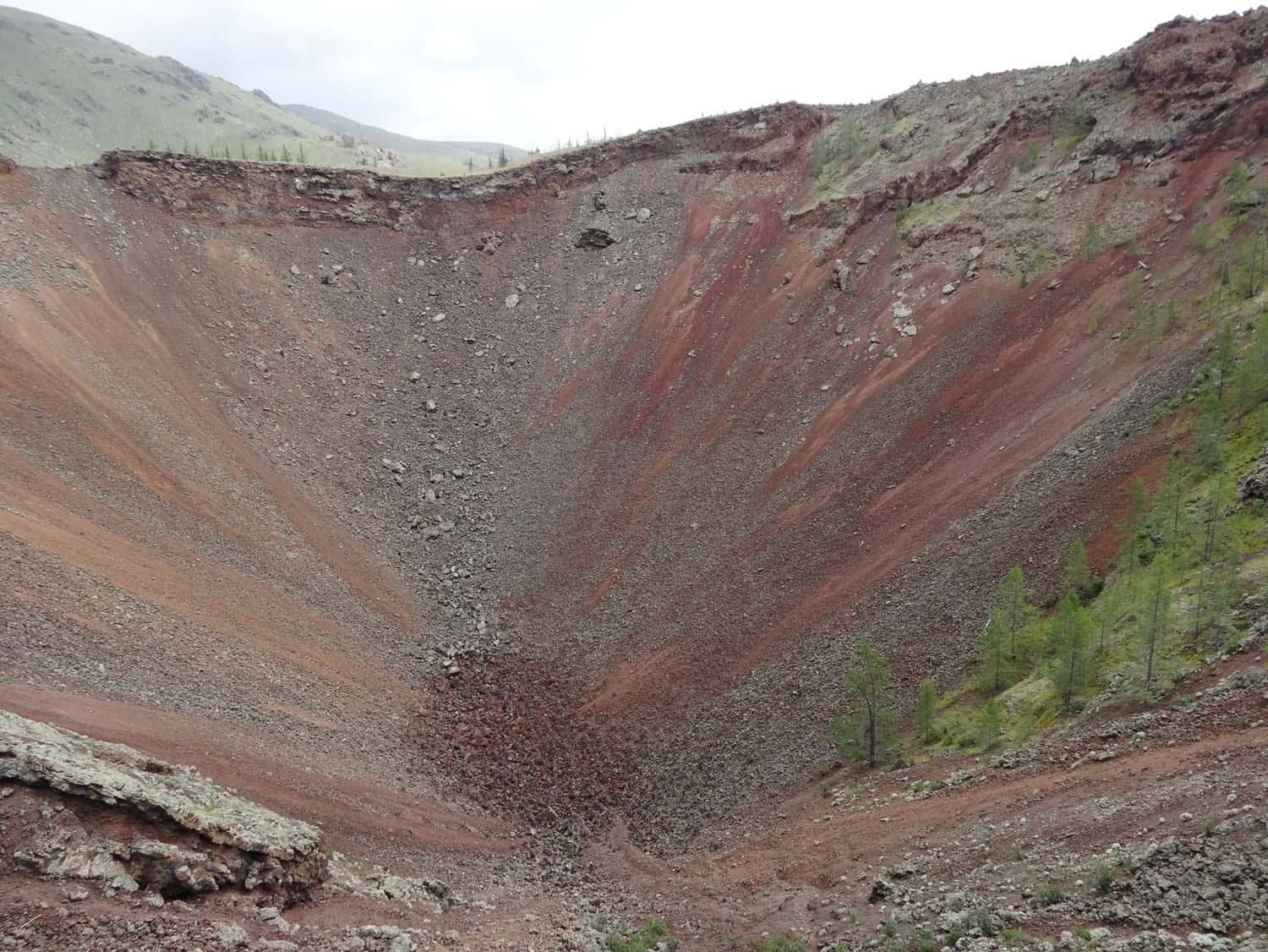 looking down into the old crater 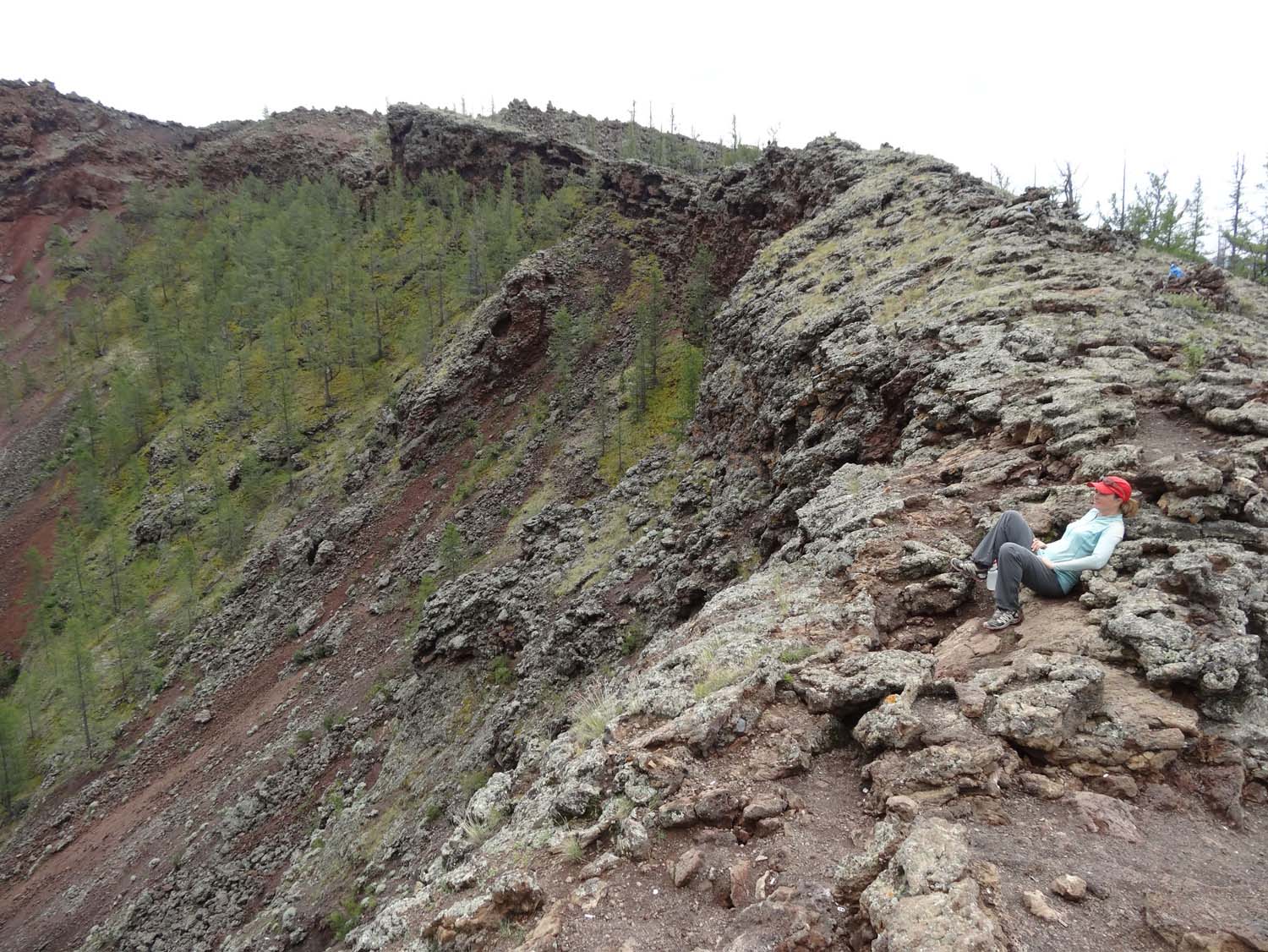 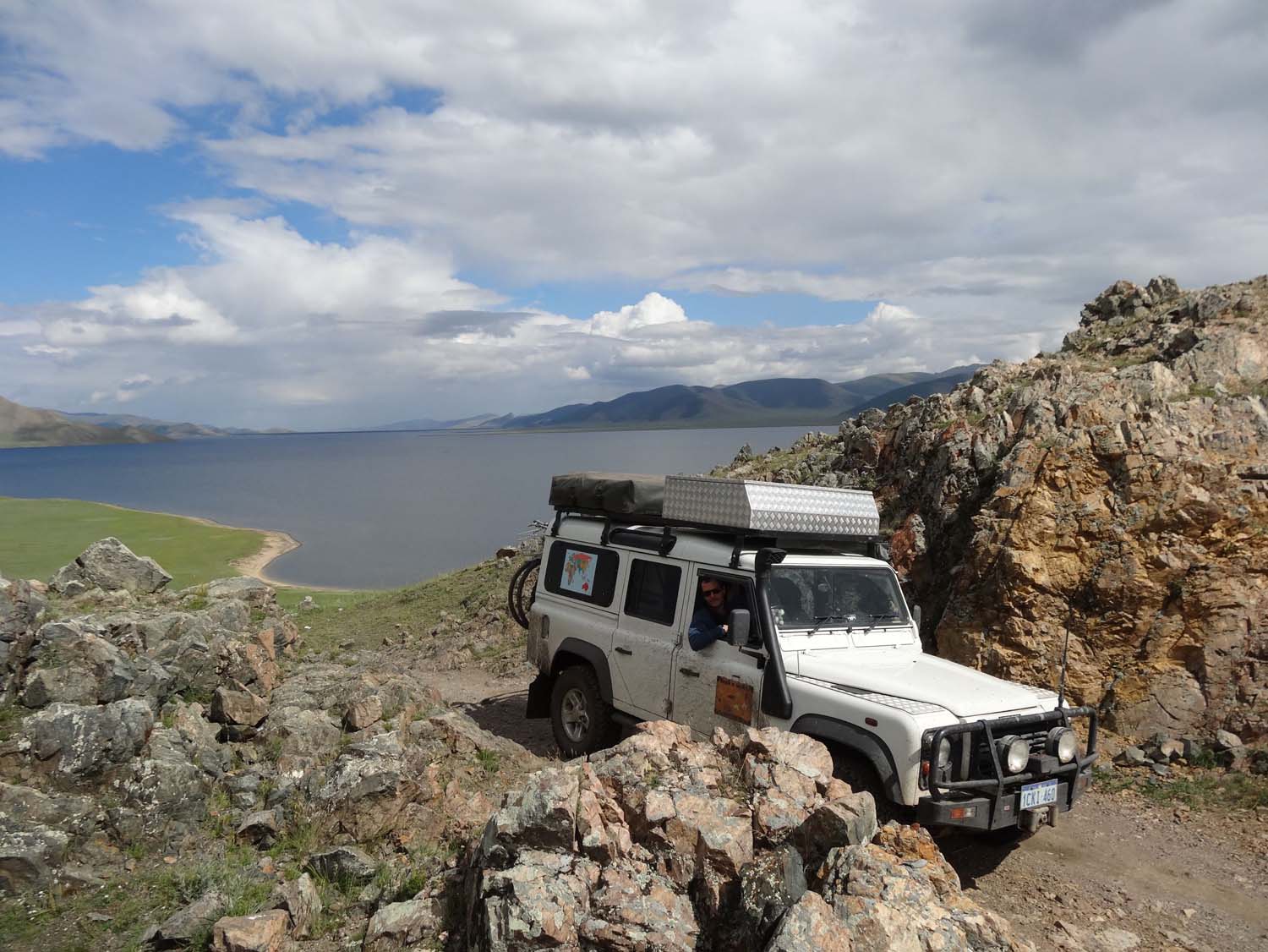 leaving the lake and the volcano

Instead of driving out the normal way straight back to the main road, we decided to continue north through a beautiful valley and camp there, before cutting west back to the main road. This meant some seriously muddy creek crossings on the way, two in particular had a massive bog with a million tracks going everywhere before and after the crossing. 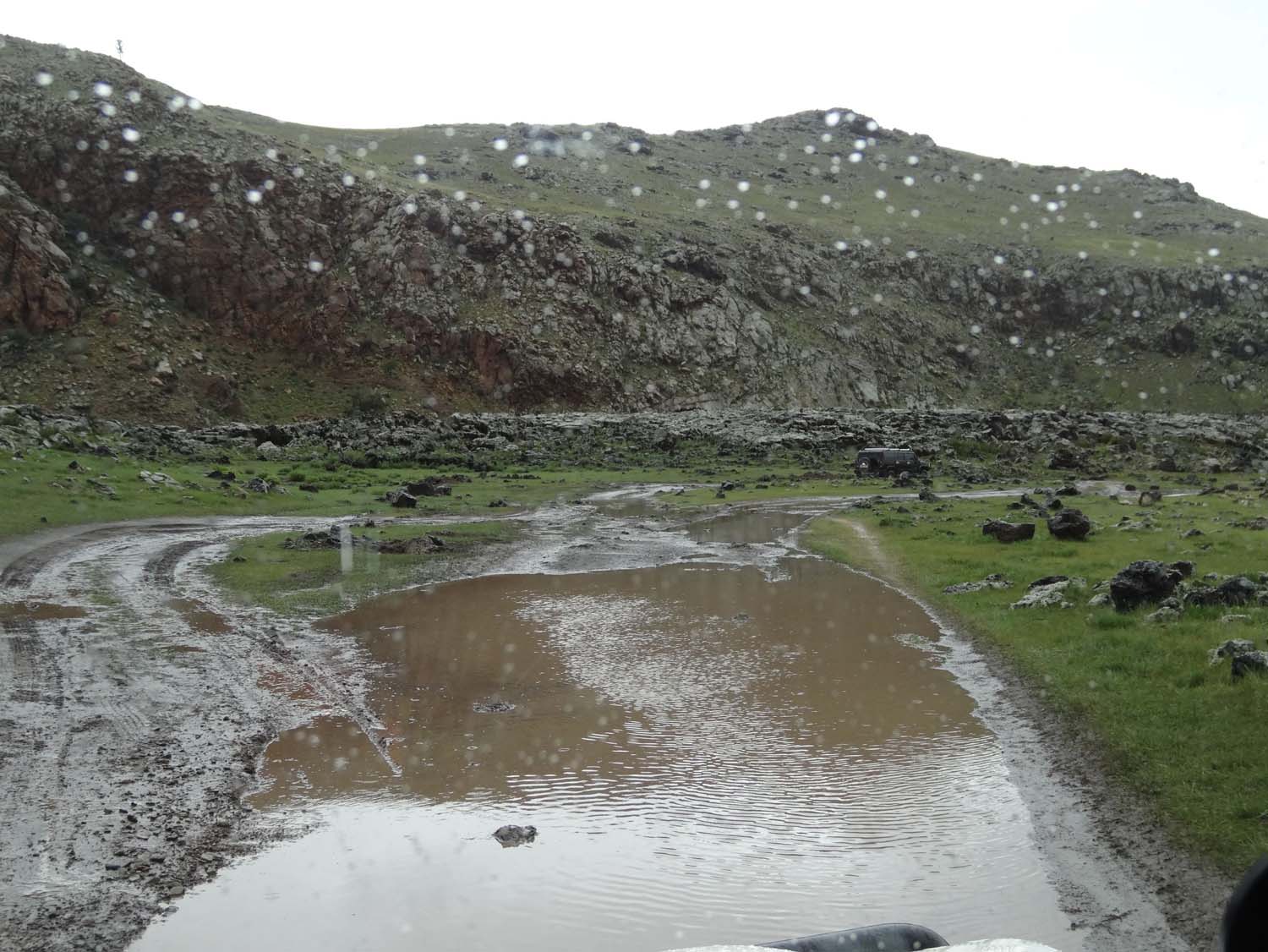 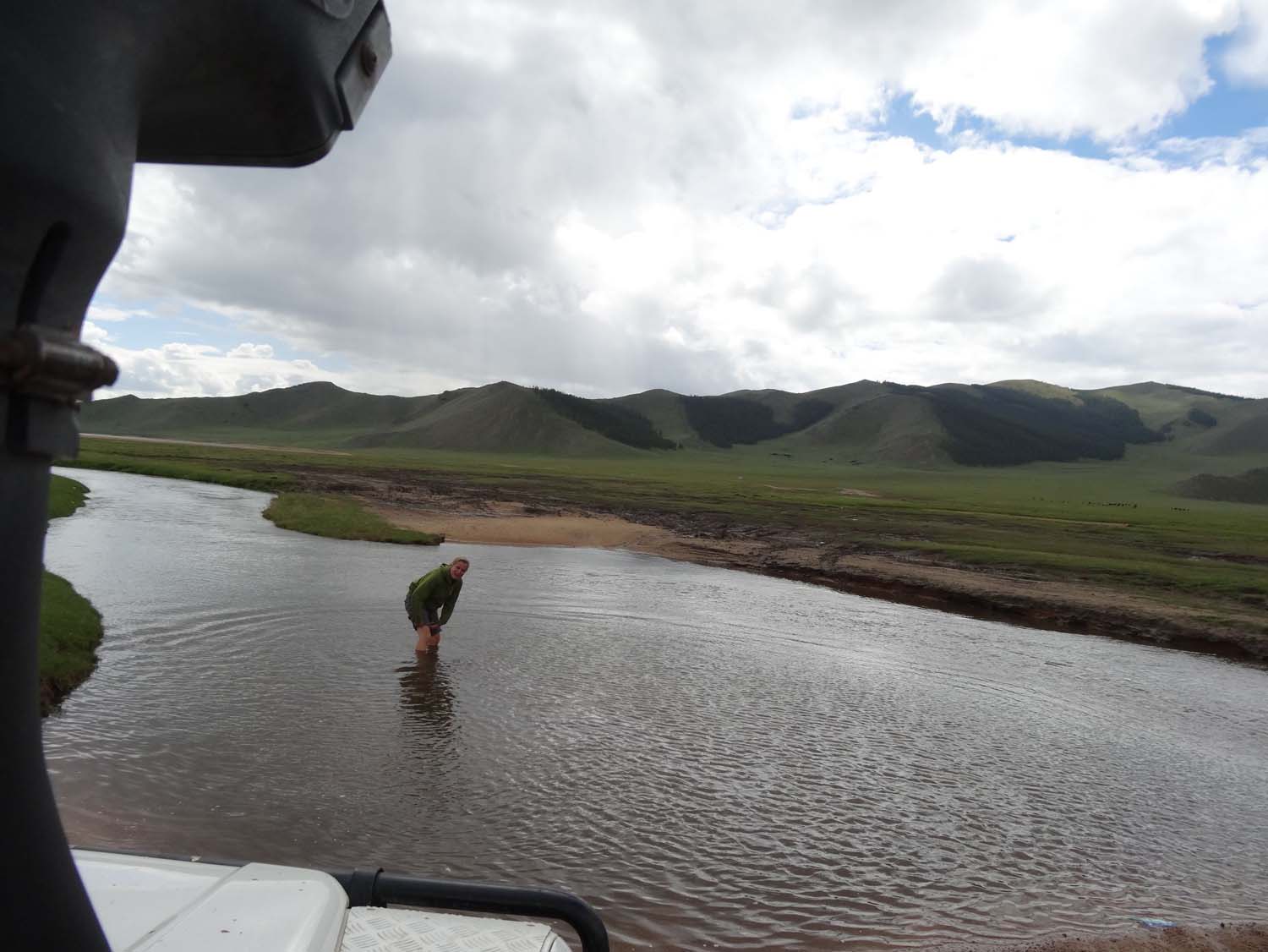 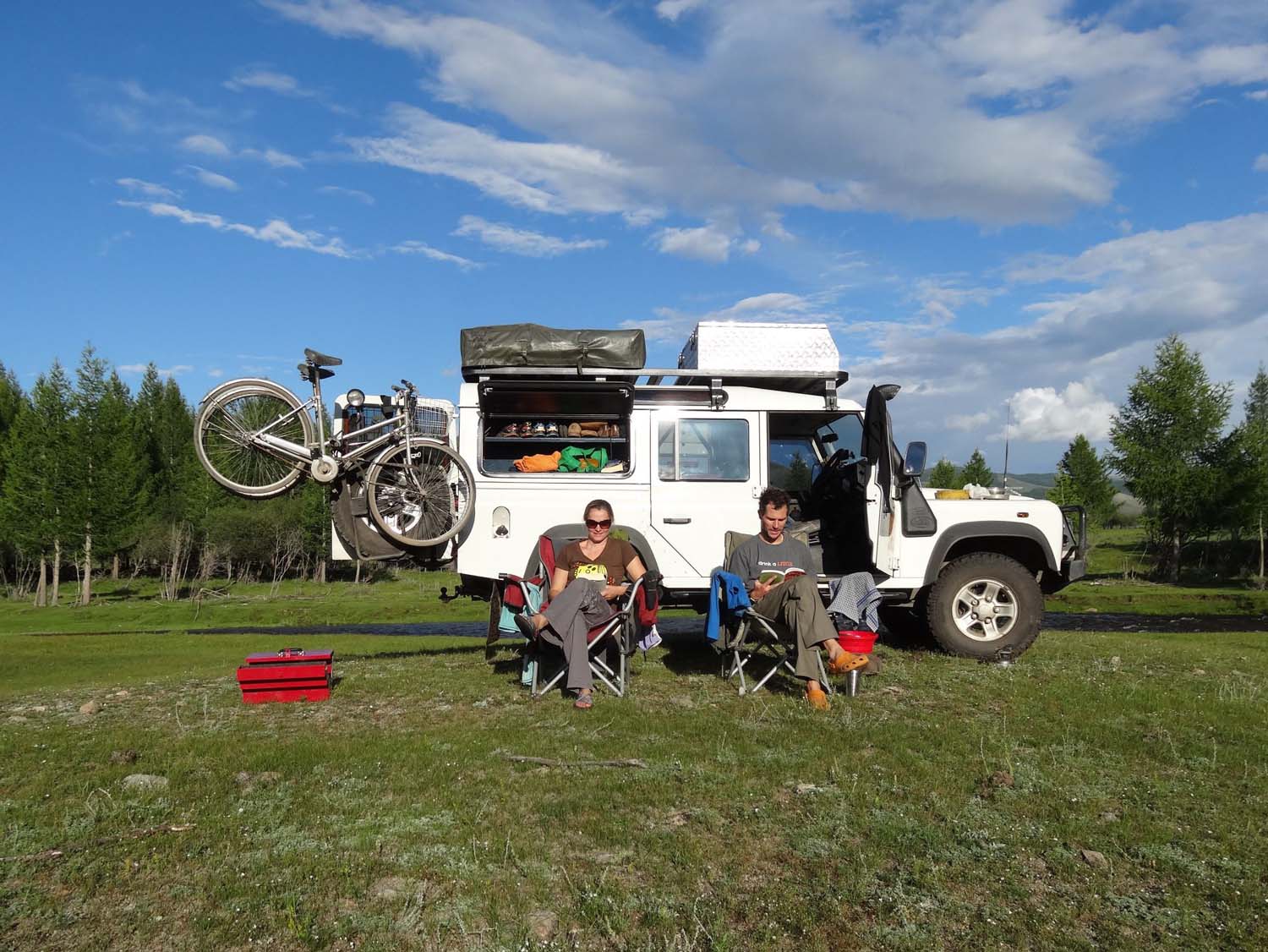 idyllic campsite – can you see the creek behind us?

Once on the main road we drove past Mongol Els, tiny sand dunes, where we saw a family setting up their ger. We had always wondered how you set up a ger, so we bounced through the grass and asked if we could help. They didn’t speak any English, but they understood our gestures and they were happy for us to help.

All of a sudden we were hanging up big stretches of felt and holding things in place whilst they were tying it all down. The most impressive is how they place the massive canvas outer over the ger. We had to wait until the lady of the house finished some repairs to the canvas (sitting in the grass with her hand-powered sewing machine), but then they began. The trick is to fold it a certain way, until it’s a heavy, but manageable-sized parcel (about 1.50m x 1m x 50cm). This is heaved onto the roof at the back of the ger. 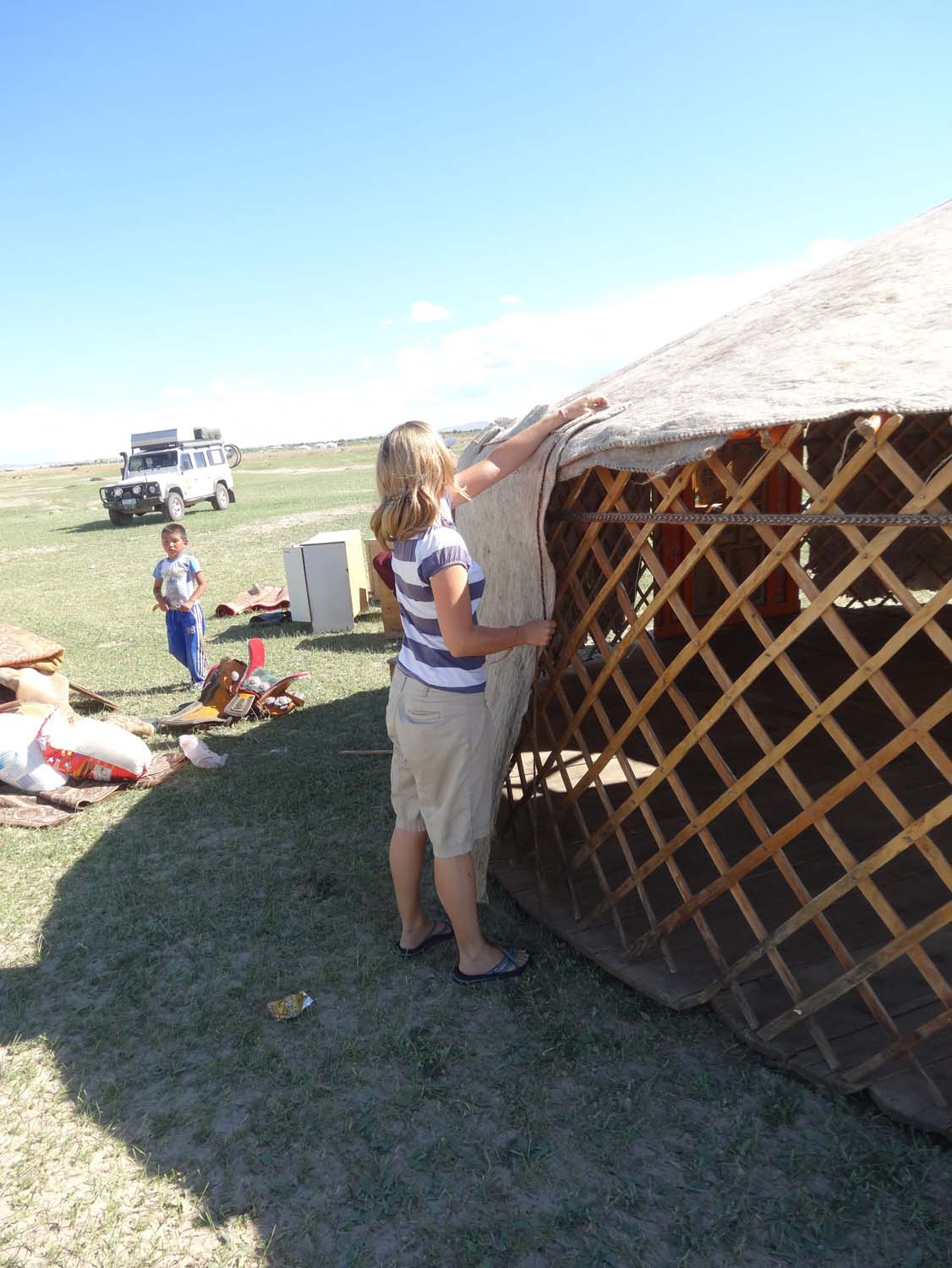 hanging up the layers of felt 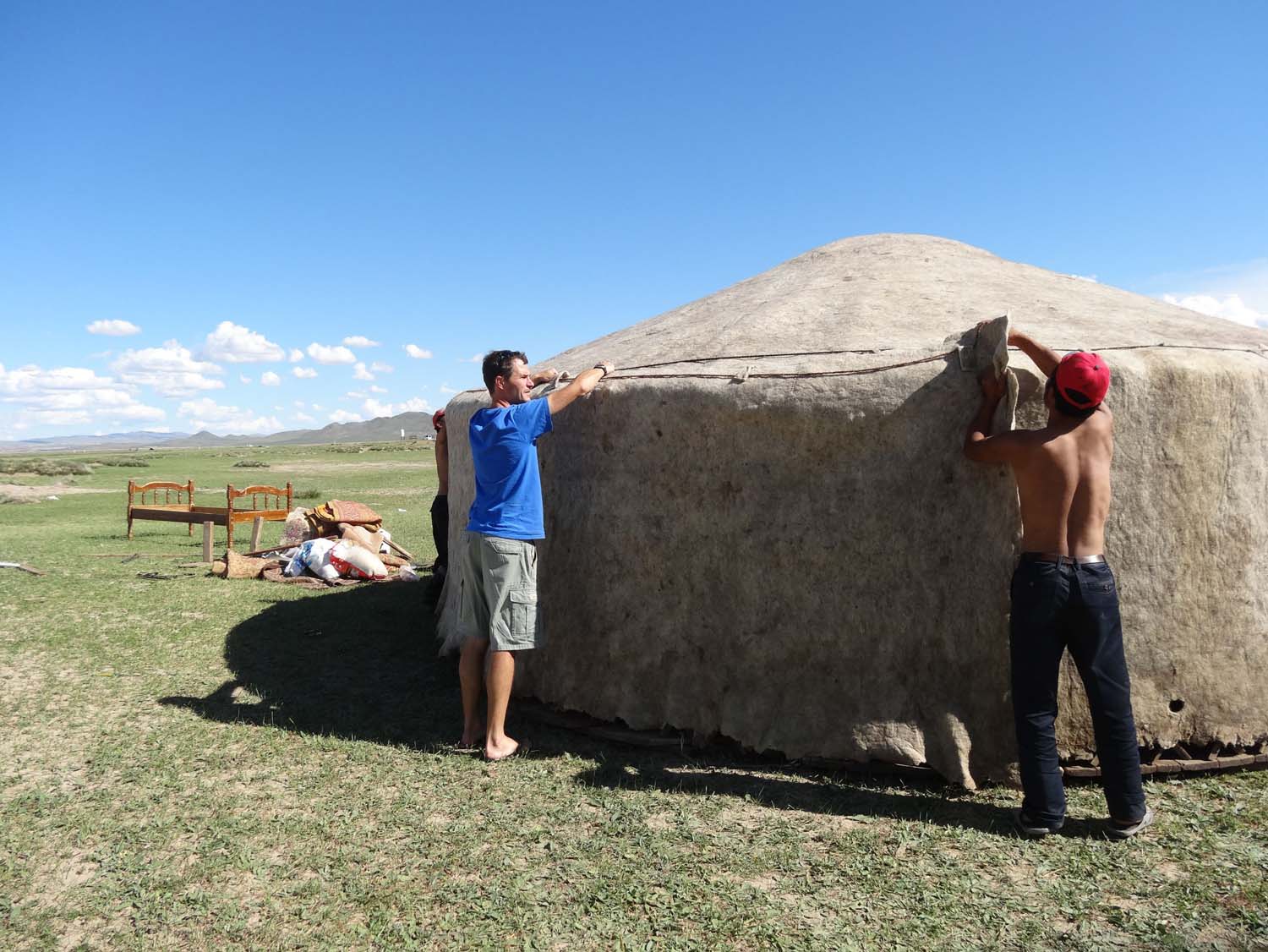 tying down the layers of felt 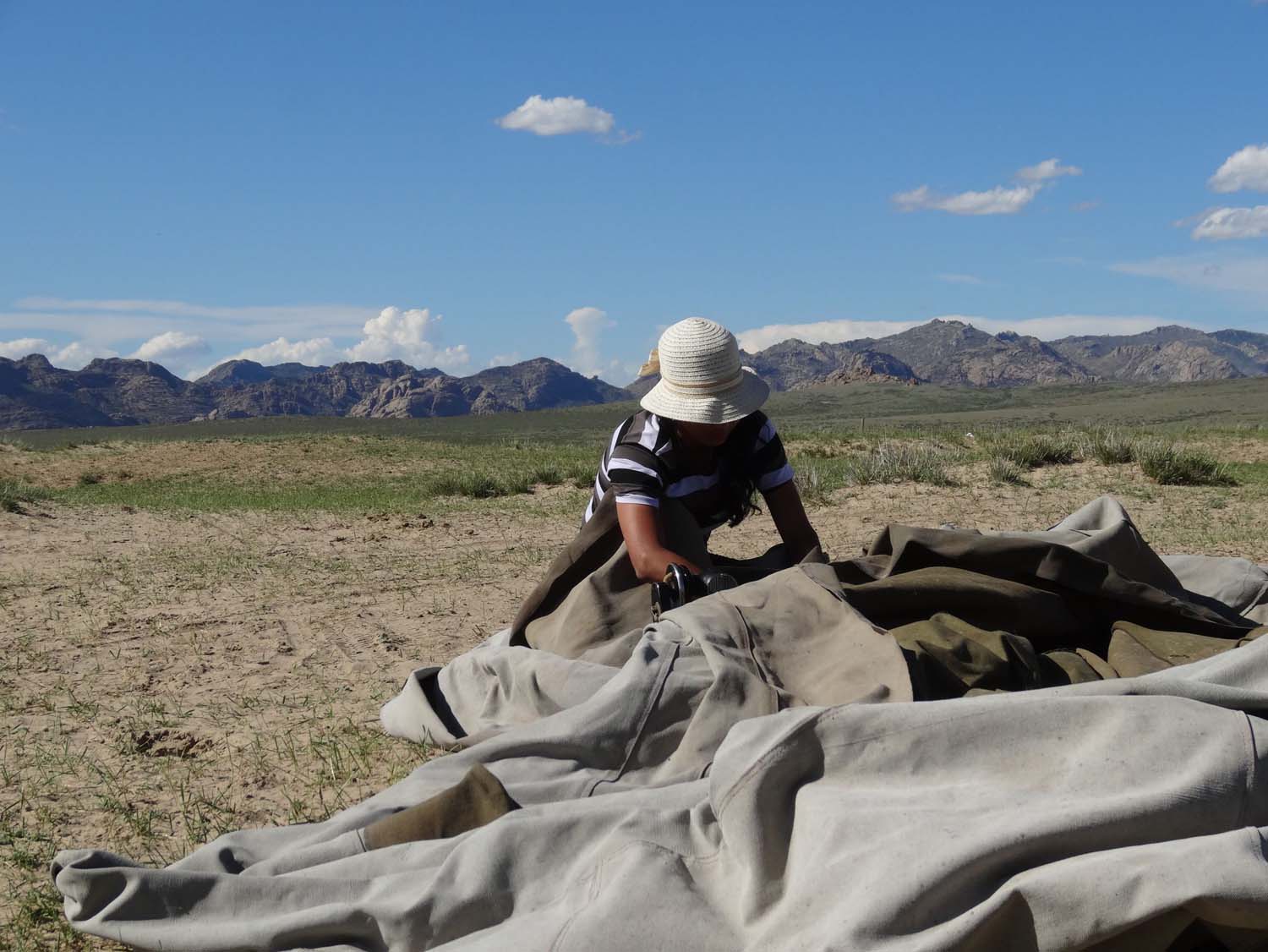 fixing the outer canvas layer with her sewing machine 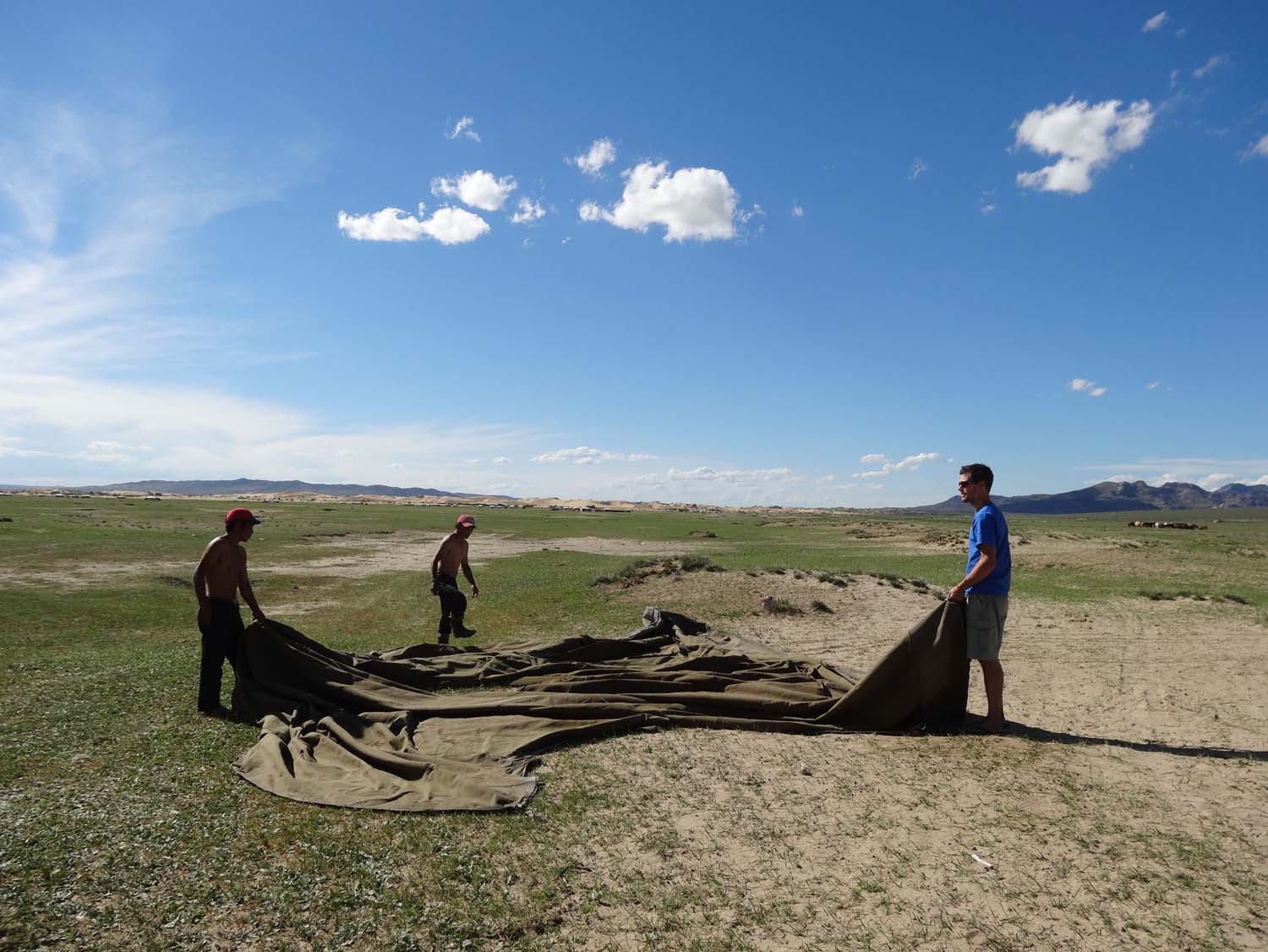 They then use 2 of the beams from the inside of the ger (part of the roof) to prod it, push it and unfold it into place. Amazing. Once the outside is finished, the inner needs to be decorated. We helped with the roof sheet and were then rewarded for all our help with disgusting, hard aruul biscuits (taste like yoghurt that’s gone off and are as hard as a rock – literally) and not so tasty airag (fermented mare’s milk). A great experience and we love the fact the Mongolian nomadic lifestyle is still very much alive! 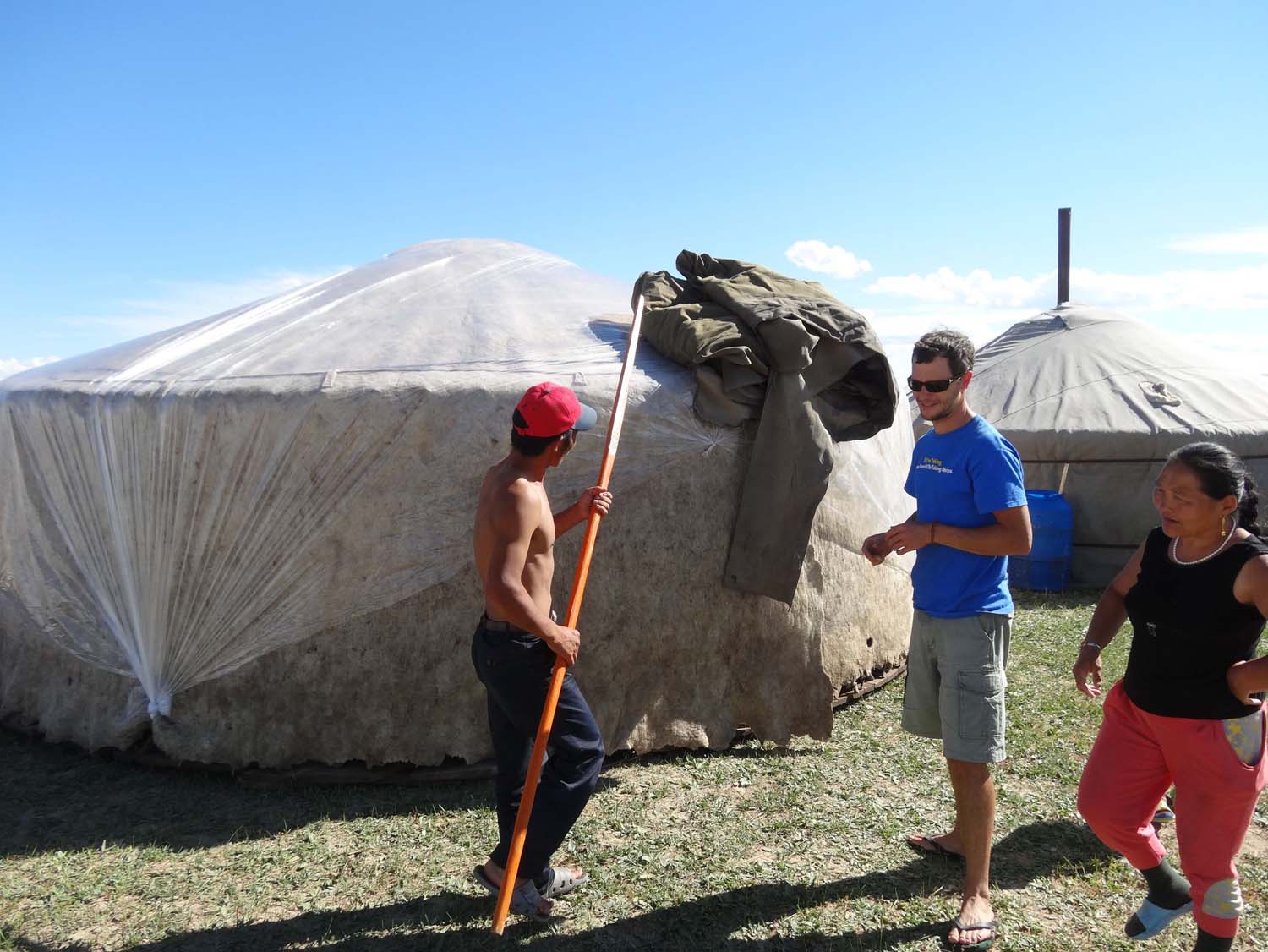 once the outer layer is on, they use the beams from the roof to unfold the canvas outer layer 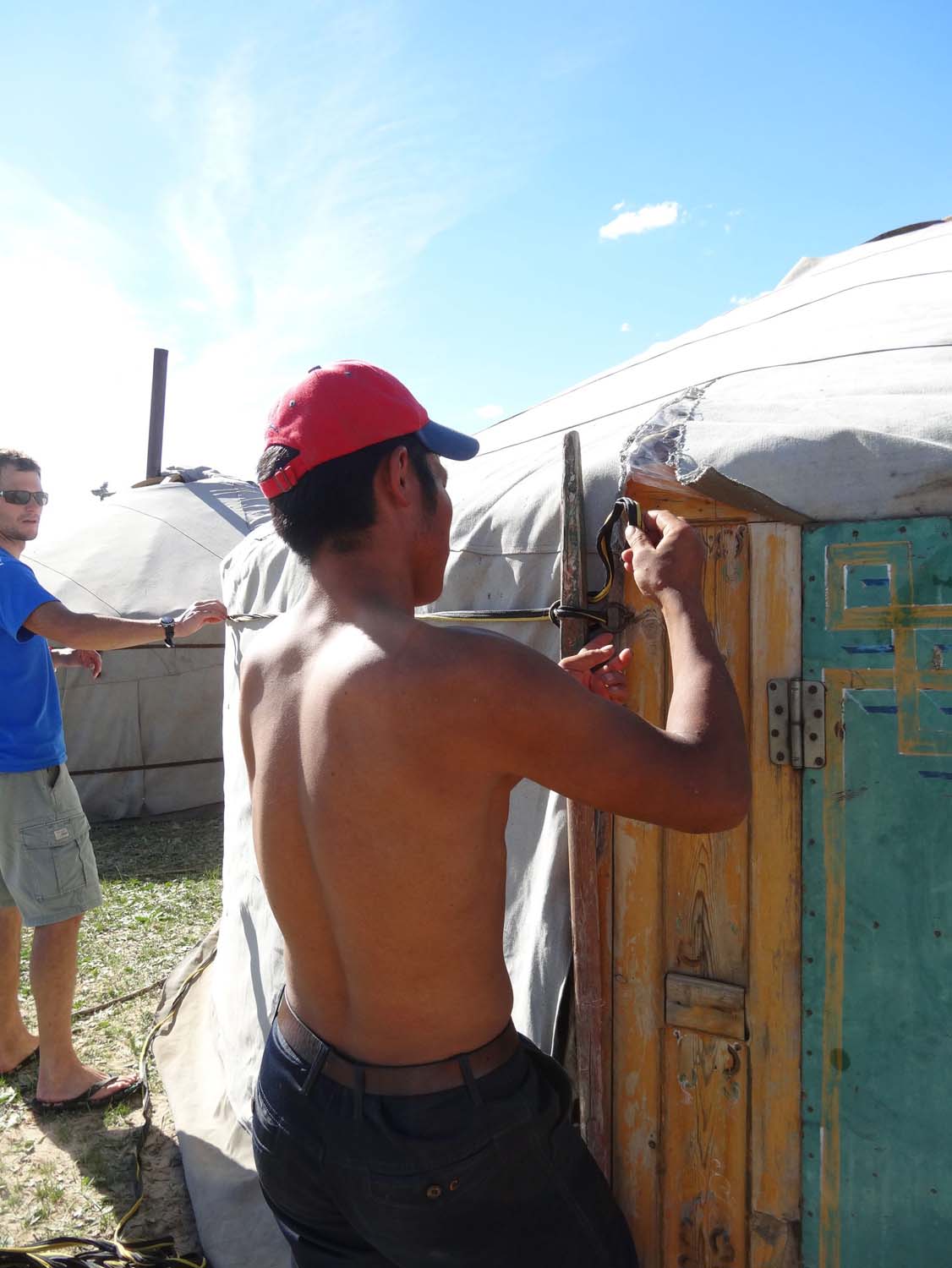 tying everything together at the door 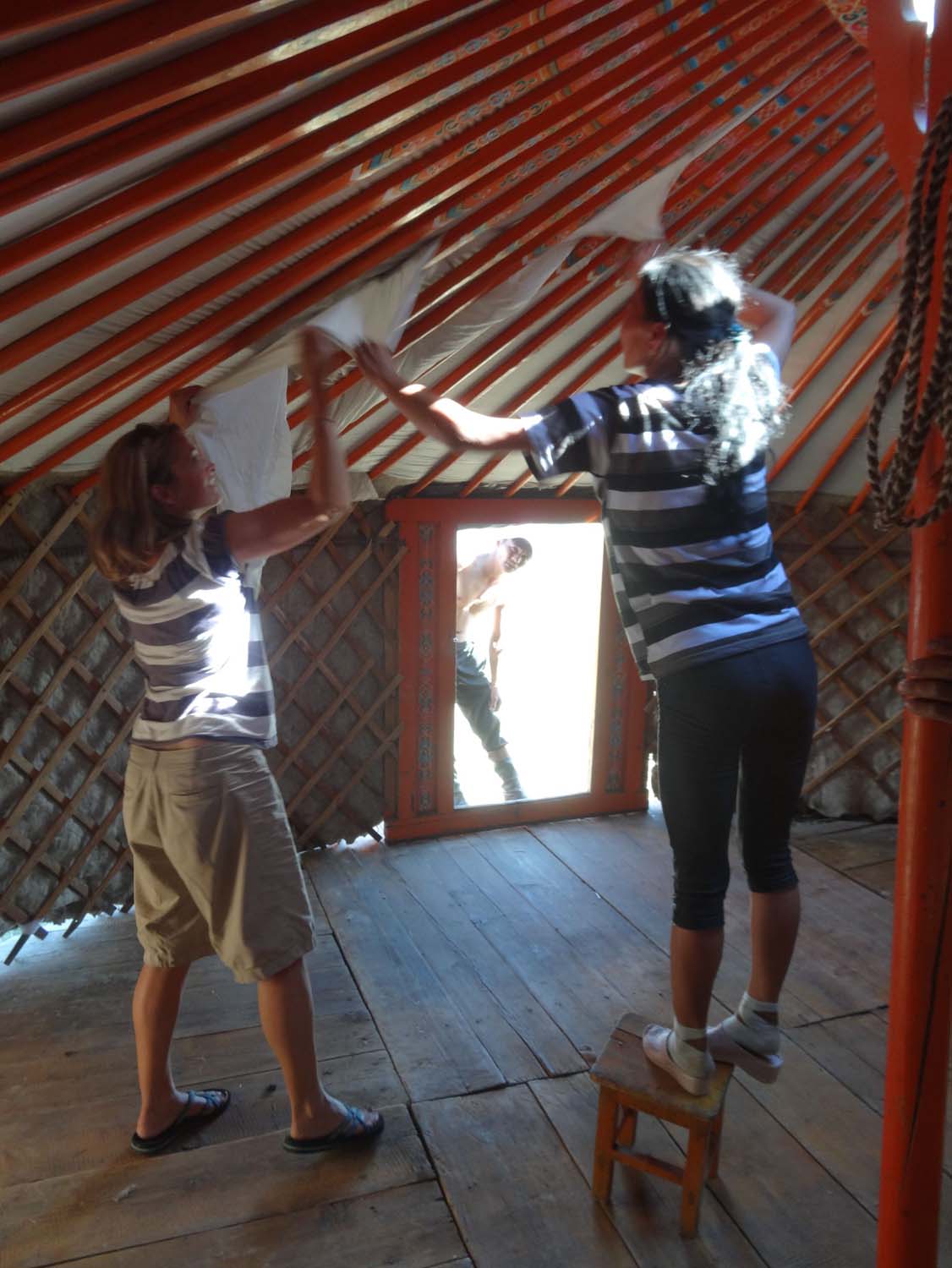 threading the inner roof decoration behind each roof beam 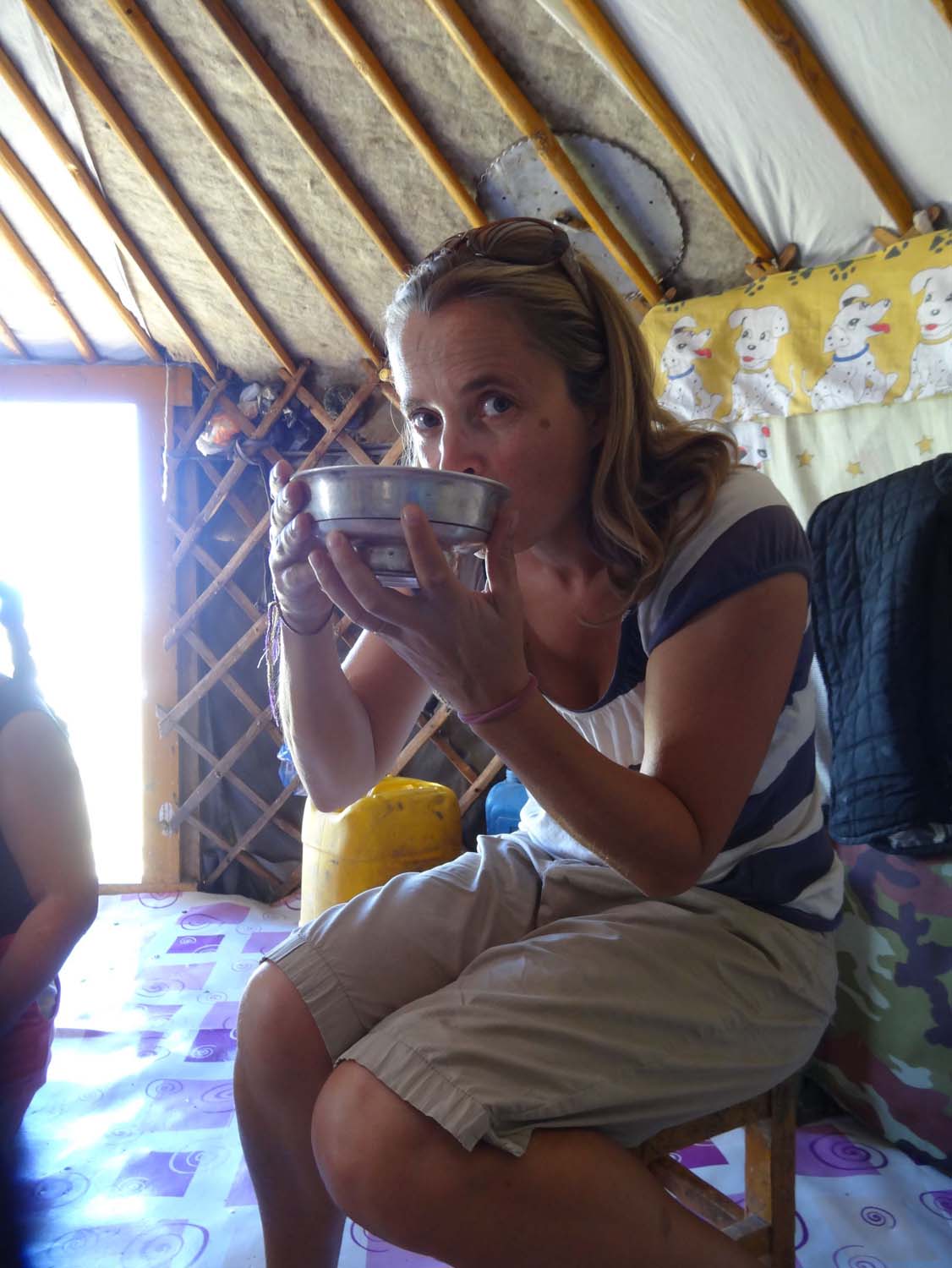