In Dar es Salaam we have a cooking club. It is run by two Dutch brothers (Erwin and Jeroen), who also have a great catering company here.

The cooking club is like a restaurant, with a large table, set for the right amount of people coming that night. But, in the cooking club you don’t just sit down and order your food, you prepare the food yourself. 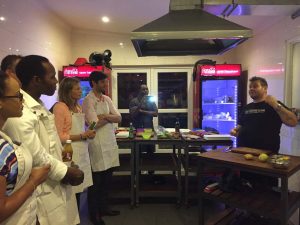 everybody listening to Jeroen’s explanation

And when Jean, a colleague of Jon, was leaving, they thought it was a great way to have a different farewell dinner with the team. Luckily partners were welcome too.

So, one Friday night we all donned our aprons, sharpened our knives and started chopping, grilling, mixing and decorating various plates. Jude was part of the dessert crew and made some very interesting and delicious tartlets. Apple, dried fruit and nuts were the main ingredients, but they had to be added in reverse order as it was an upside-down tartlet.

Jon was part of the team preparing the main course, but as his partner is vegetarian (or better a pescatarian), he was also tasked to prepare a fish-dish for Jude. It was quite a complicated dish, but with the help of Jeroen he created a delicious tasting stack of fish and prawns. 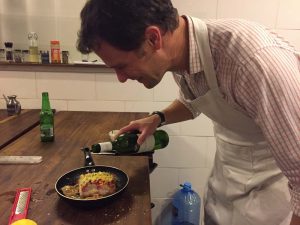 Jean and Kathryn were both on the starter team, which also required a separate version for Jude. It was quite a lot of detailed work with many steps involved, and Jon helped out with Jude’s version whilst the rest of the team focused on the meat version. 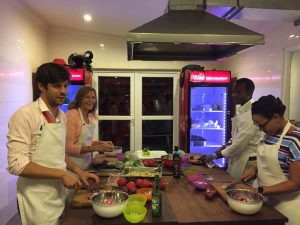 Jean and Kathryn working on the starter 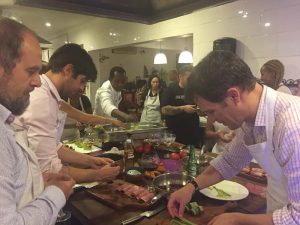 Jean and Kathryn working on the starter

The end result was amazing. We had a super delicious meal, (mostly) prepared and cooked all by Jon’s work team and very much enjoyed eating it! We’ll be back here for sure! They also have options to cook Swahili dishes, so if you are a foody and want to visit us and combine a safari with some creative Swahili cooking let us know! 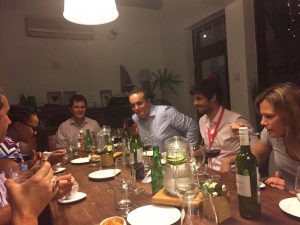 sitting down to enjoy our hard work and delicious result