We went to see the masokwe (chimpanzees) in Gombe Stream National Park! What an amazing place, and a perfect spot to spend our last few days of 2016 and our first days of 2017.

It’s not an easy place to get to, this tiny little national park in the west of Tanzania, fringing the spectacular Lake Tanganyika. Up until very recently this was Tanzania’s smallest national park at only 52km2. But not long ago a new national park called Saanane was created which is even smaller then Gombe NP. Saanane is only just over 2km2 and is an island located in Lake Victoria, but we digress…

Gombe Stream National Park can only be reached by boat from Kigoma, a small town located on the shores of Lake Tanganyika, the world’s longest fresh water lake containing 18% of the world’s fresh water. It contains more water than all the water of the great lakes in the US combined! It’s also the second deepest lake in the world (the crown for deepest lake goes to Lake Baikal where we spend a lovely couple of days in 2013 – see green winter in Siberia) and it has more than 250 species of cichlids, some of which are well known as incredibly popular and colourful aquarium fish. Others are well-known for eating 🙂 We tried a few and dagaa (local name for tiny little fish) and yellow-belly (also known as English fish) are recommended.

To get to Kigoma you can hop on a plane for a quick 2 hour flight from Dar, or there is the option of taking the train. This will add another 2 days of travel – we’ll leave that for another day. We were lucky as Air Tanzania (Tanzania’s national airline) has recently started flying again and Kigoma is one of their destinations. It leaves Dar es Salaam at 6am in the morning, so we set our alarm for 4am. We were picked up by Sixtus, our guide, at the airport in Kigoma and first taken to the Kigoma Hill Top Hotel, from where the boat would take us to Gombe Forest Lodge. 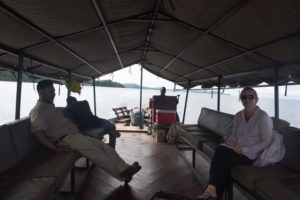 Sixtus, our guide, and Jude on our private dhow to get to the entrance gate of Gombe Stream National Park

Sixtus has been working in Gombe and Mahale for nearly 17 years and during the 2 hour boat ride to the main gate we learned a lot about the lake, the national park and of course the chimpanzees. He had a chat with the park rangers after we arrived at the main gate and decided it would be a good idea to set off immediately for a walk to see if we could find the chimpanzees. We hadn’t had any breakfast yet and it was approaching lunchtime, but we were very keen to head out and maybe catch our first glimpse of the chimpanzees!

We quickly got changed and in no time we found ourselves walking through Gombe Stream National Park. We were going to try to visit Kasekela, the central group, which are all hanging out together at the moment as it was the wet season, meaning plenty of food, but also because they recently had a change of alpha male. The new alpha male, Fudge (the previous alpha male Ferdinand was ousted 2 months ago) is keeping everybody nice and close together for now.

Very quickly the trail started going up at a steeper angle and we were sweating buckets immediately. At every track junction Sixtus would head off, calling out, trying to find out which way to go to find the chimpanzees. He heard them call once, but after that they were eerily quiet. And then, all of a sudden we were there. We saw the tracker Fidelis who was watching them and the whole whoop (!) of chimpanzees was around us, just waking up after a siesta. Immediately, the noise was deafening as they were all talking to each other as they moved towards us before heading down a steep slope towards a stream and more food. 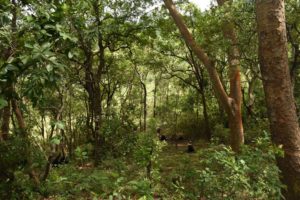 this is how we found the whoop (!) of chimpanzees for the first time, seconds before they all woke up and decided it was time to find some food

Time to get off-road and try to keep up… They are incredibly quick and soon the last ones had past us as we slowly tried to not slide after them on our bums. Occasionally we saw a chimpanzee when they stopped to eat, but it wasn’t until we reached the drum tree that we had our first relaxed look and we could sit down and watch them. The drum tree seemed a favourite with young and old, everybody had to run on it, kick it or give it a couple of good slaps, making a hollow drum sound, before searching for some more food. However, Fanni had decided to stop here and relax whilst her baby was climbing and swinging all around her. Just magic. 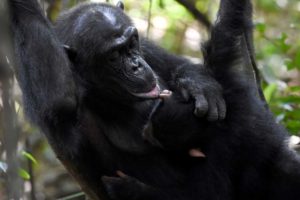 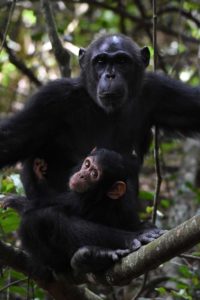 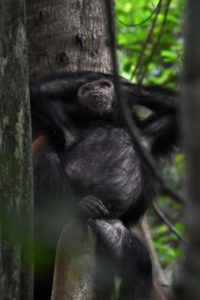 Fifty, son of Fanni relaxing in the drum tree nearby

We followed the chimpanzees down the hill and made it back to the lodge for a super late lunch, before going for a swim in the lake. Sunset drinks followed by more drinks at the camp fire with the stars and the fireflies as company. A brilliant ending to our first day. 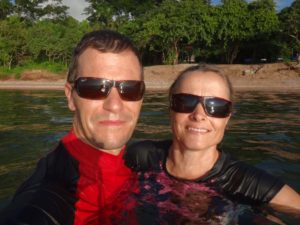 Jon and Jude go for a quick swim before dinner

Tracking with chimpanzees means we can have a sleep in. It was 8.30 as we jumped into the dhow, ready for another day. We hadn’t gone far before we had to stop at a trail junction – the chimpanzees were walking past us on the intersecting trail! Of course we followed and we spent another pleasant morning in their company. The highlight today was the creek crossing – chimps don’t like to get wet feet – and a few very close encounters, including with Fudge, the alpha male. 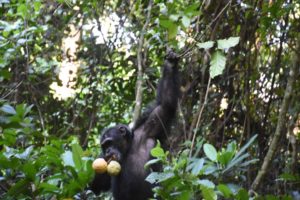 Fudge, the new alpha male, has found some large mabungo fruit to eat 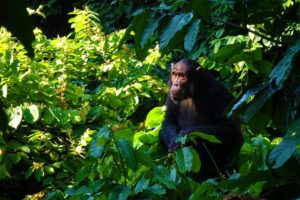 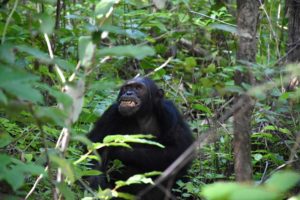 did he just fart? 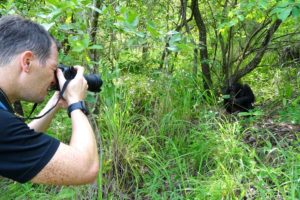 Jon taking a photo of Tom 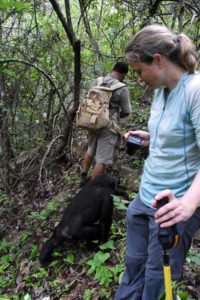 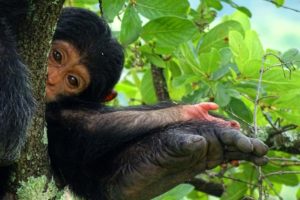 such a tender moment

On the way back we spotted a beautiful, but very venomous vine snake before we had to find shelter near the main gate as the heavens opened just 5 minutes after we got back. We had lunch at a slightly more normal time before a long talk with Sixtus, followed by a paddle on the lake in the lodge’s kayak, which resembled a big orange bathtub. We took our masks and snorkels as well and checked out some of the famous cichlids of Lake Tanganyika. We turned the bathtub around at the local village where we were inundated with about a dozen little naked boys who nearly sank it as they all wanted to climb on board! 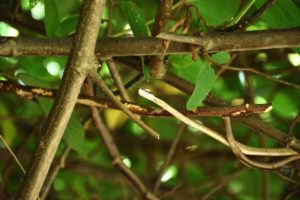 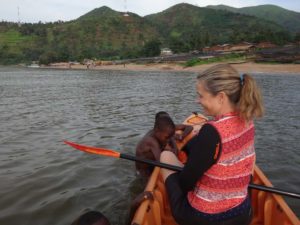 going for a paddle to the local village just outside the national park, all the young boys climbed on until we nearly sank 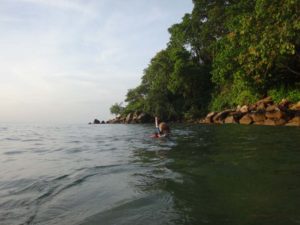 More drinks at sunset and around the campfire for our last evening of 2016. A beautiful cake was made for new year’s eve and we shared it with all staff before returning to the fire for some more drinks to welcome the new year. 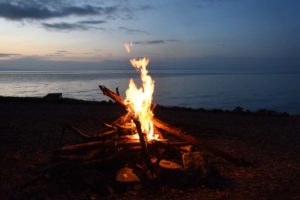 G&Ts at the bonfire on the beach, a perfect way to end the year

We had an early start to 2017 so we could squeeze a final visit to the chimpanzees in. We were lucky, the chimpanzees had come down the mountain all the way to the beach and we only had a short walk before we could sit with them as they rested before heading out again for some more mabungo (bungo – a local wild fruit) eating. At one point we counted 24 chimpanzees sitting in 2 trees right in front of us. Given the steep slope, they were pretty much eye-level and some walked right past us to get into the tree, blatantly ignoring the 10m rule!

Fudge, the new alpha leader, has made himself a bed right in front of us. As soon as he utters one sound the whole cartload moves off to continue feeding. 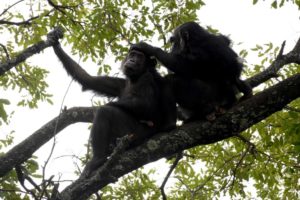 Our time was up and we said good-bye to the chimpanzees one last time as they headed further along the beach, but not before Fudge had to defend his newly gained alpha status. There was a lot of noise and running around!

Again the rain started as we climbed back on board our dhow, we were definitely very lucky with the weather. A quick shower and lunch before we hopped back on the dhow for the trip back to Kigoma. It was an amazing trip and we were incredibly lucky to have the best guide, he definitely made our trip very special. If you are planning a trip to Gombe or Mahale National Park, send him an email, as he can surely help out organising it all. We are already looking forward to a trip to Mahale National Park, much further south on the shores of Lake Tanganyika, to see the chimpanzees there. Let us know if you want to join us! 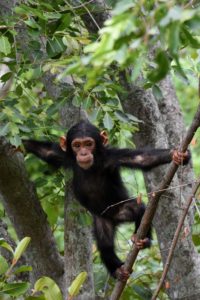 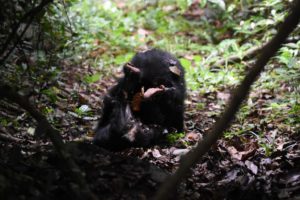 two kids rolling around over the floor 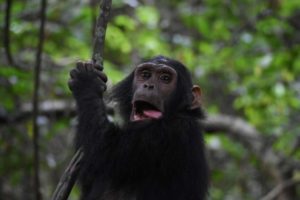 Organising a trip to Gombe Stream National Park in Tanzania

Contact Sixtus to arrange everything. He will pick you up from the Kigoma airport, transport you to the Kigoma Hill Top Hotel from where you will jump on the boat to the entrance gate of Gombe Stream NP.

You can stay in the Gombe Forest Lodge inside the national park and before you fly out of Kigoma again you can spend the last night at the Kigoma Hill Top Hotel (if you need to, our flight left around 8.30am and we were not able to make that connection straight from the national park). 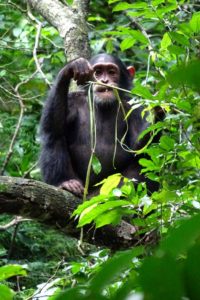 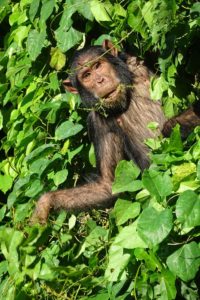