We already have vinyl on the floor in the palace, but we still headed to the shops to get some carpet and liner too.

The carpet was for the cab. Jon had already made two pieces of lining from the old roof and wall lining. They were going to cover up the foam on the panels we inserted behind the b-pillar, make it look a little bit more finished and professional. But the aluminium ‘shelf’ above the newly lined panelwork and the rear wall of the cab remained awfully bare. 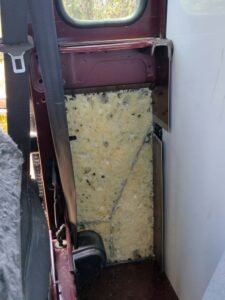 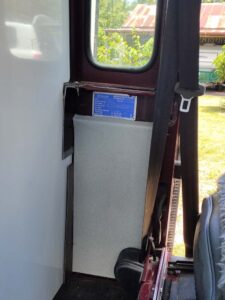 Jon made these panels to fit in front of the foam, making it look a lot better, but the aluminium next to it and above it is still very exposed

The rear wall of the cab was fiberglass, it’s the other side of the front wall of the palace of course. And fiberglass is very white and shiny. We wanted to add marine carpet. It might aid with the sound-proofing of the cab, but we were also hoping we could then hang little fabric pods on the fabric with velcro. Little pods for things like our suncream and mozzie spray, and we have no doubt we will add more things in pods if that idea works. 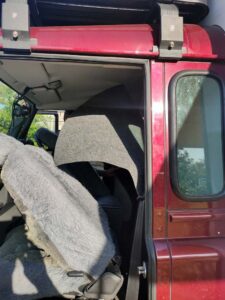 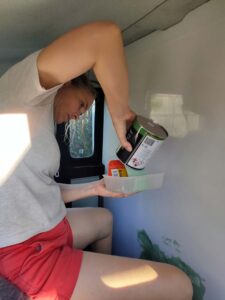 the glue was green, very thick and smelled like toothpaste, very odd 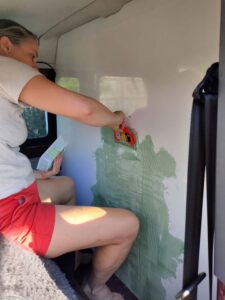 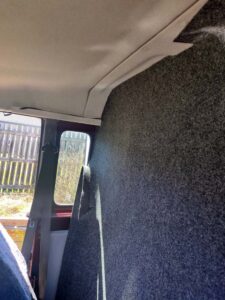 the first corner has been cut to size, starting to look good 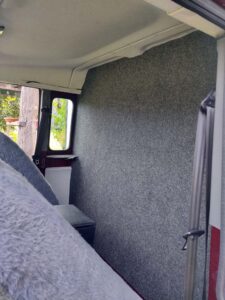 job done, you can see the little shelf above the panel has already been done too but the front of it still needs to be glued down too (has been done since)

Jude made a couple of pods to try, let’s see if they stay on the wall when driving…. 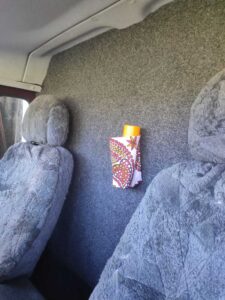 Jude’s first little fabric pod, this one contains the mozzie spray – let’s hope that it will still be hanging there when we get to our first campsite

Then we also had to buy some marine liner. It’s basically the same as the carpet but thinner, so it is more pliable. We needed that because we were gluing it to the aluminium pop-top extrusion on the inside of the palace. It’s not that we didn’t like the black aluminium on the inside, but as the aluminium connects the outside to the inside, we would have the issue of condensation forming on the inside and dripping down on everything. When we camped in Lara the first night we could already see this happening. It would be worse with greater difference in temperatures.

So, one day Jude drove down to the Gold Coast to a little shop to pick up a piece of the liner. We first tried a small piece to see how hard it would be, and then one weekend we did the rest. It wasn’t too hard. We covered everything with a cloth to stop any drips of glue falling down on our finished interior, and punched holes in the top for the screws that hold in our sock (the canvas between the walls and the roof).

Now we won’t have to worry about condensation and another job is ticked off the list. 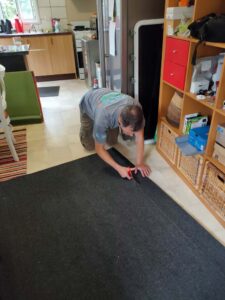 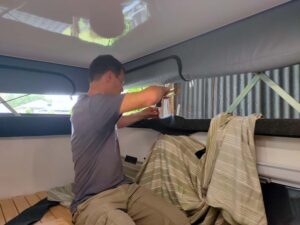 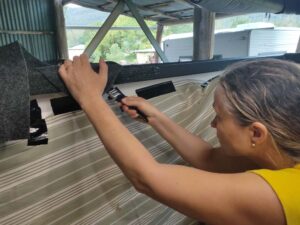