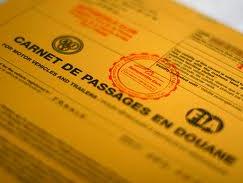 Below you can read about the nitty-gritty of the carnet details, how to get it, who best to contact and which countries you need it for, including the percentage needed for each of those countries. But this is our k-arr-neiii story, a story that is a bit longer than it should be.

We ordered our k-arr-neiii before xmas as we were going away over the xmas and NYE period and the expert at the RACQ (pretty much the only person who knows what these things are, what they are for and how they work) was going away after the xmas and NYE break. As we are shipping in the first week of February this allowed us enough time for plenty of things to go wrong along the way…

We received an email to let us know the k-arr-neiii had been received by the RACQ (the AAA issues it and sends it to the RACQ) and it was going to be mailed that Friday afternoon. Yippee, this was on Friday 19 January and the shipping agent needed it the following Wednesday, perfect timing! But then, Monday, no mail from the RACQ, Tuesday, still no mail from the RACQ and Jon called her as we were needing it the next day! She had sent it Express on Friday, it should have been here on Monday! I even checked with the people at 97 to see if they might have read the number wrong.

After some hours on the phone with various postal services, the only thing they could tell us was that it had been delivered! But as it was Express and not registered nobody had to sign for it and so the only thing they had was a scan on the morning of 21 January to show it had left the warehouse and was on its way to be delivered – that day.

We left on Wednesday to go to Adelaide whilst the lady form the RACQ was launching an investigation with Australia Post to see where the envelope had ended up. All they could tell us by the end of that week was that apparently the postie remembered the envelope and remembered NOT posting it as it was raining and it wouldn’t fit entirely into our mailbox. He couldn’t remember what he did with it though…

The RACQ were very helpful and suggested we start with plan B. Plan B was to have a complete new k-arr-neiii issued and sent to us, pronto!

Ok, plan B it was as Australia Post doesn’t seem to be getting anywhere with this. They were very quick this time (normally issuing a k-arr-neiii takes about a month) and on Friday we received a phone call to let us know the new one was ready. Did we want it mailed to us or did we want to pick it up? I assume you can probably guess our answer to that question.

Then, we had a surprise visitor. After getting back to Brisbane on Sunday morning, Jon was working on the car that afternoon when a lady pulled up in front of our house and got out of her car with a rather scruffy looking Express envelope addressed to us… She lived on 91 Elizabeth St in Paddington, we live on 91 Main Ave in Bardon and Australia Post had delivered it to her house. Well done Australia Post for getting it nearly right, I mean it was the same house number right?! (and thanks lovely lady for dropping it off to our place!)

We were very happy and planned on calling the RACQ on Tuesday (Monday was the public holiday for Australia Day) to let her know that it had arrived after all and we wouldn’t need the second one. Until…. Jon opened the envelope and checked our details on the k-arr-neiii…. According to this we had a Land Rover Harley Davidson with a chassis number that didn’t even look like ours. I guess we were calling the RACQ on Tuesday, but not only to let them know it had arrived, but also to let them know they would have to issue a third one, this time with the correct details.

So, Jon drove out on Tuesday to pick up the second k-arr-neiii and this is where the story ends. He checked the k-arr-neiii in her office and this time they hadn’t just copied another one, but they had actually entered our details correctly. No need to issue a third one (luckily, as we were seriously running out of time). We quickly scanned this one and mailed it to our shipping agent who was breathing heavily down our necks by this time.

Oh, and this was the first time the RACQ had ever ‘lost’ a ‘k-arr-neiii’ in all those years they have been issuing them… I guess we were just lucky 🙂

Managed by the Australian Automobile Association (AAA), but application forms through RACQ (you must be a member). The contact for information / processing / discharging AAA carnets is: Mrs Peppina Sorbara, International Documents Officer, AAA. Email: Peppina.Sorbara@aaa.asn.au; Ph 61 2 6261 4407.

Carnets allow visitors to temporarily import their vehicles for a limited period – valid for 12 months from the date of issue. With your application form you must provide the security customs bond in either

The vehicle must carry current local registration while overseas and have a country sticker fitted near the rear number plate (Australian – a white oval sticker with ‘AUS’ black lettering – comes with carnet pack).

Important – do not specify an expiry date on the application form.

Information on carnets that has changed:

Info on carnet funds that has changed, or been clarified by Peppina